Requiem for the affordable sports coupe

The Subaru BRZ and its mechanical twin, the Toyota 86, feel like the winners of automotive Survivor.

They may not be the only ones left in the affordable sports coupe category but look around. Two-doors have gone almost extinct from mainstream manufacturer lineups in recent years, with the Honda Civic coupe the latest to bite the dust.

Apart from the BRZ and 86, the affordable sports coupe just isn’t much of a thing anymore. Back in 2012 when the BRZ and 86 were being rolled out they faced several competitors. Hyundai and Kia built coupes for the Elantra and Forte, and Scion, Toyota’s departed youth brand, had the tC coupe. Add those to the Hyundai Genesis coupe, Nissan 370Z and Civic, and there was a thriving coupe market among mainstream carmakers.

Since the BRZ / 86 introduction, however, all have disappeared apart from the 370Z, which Nissan says it will finally modernize. Another bit of good news is that the BRZ and 86 will likely see a second generation, and they could be based on a Toyota New Global Architecture (TNGA) platform.

At the heart of the BRZ is Subaru’s naturally aspirated 2.0-litre flat 4-cylinder, the only engine available across the range. The primary gripe with the powerplant over the past eight years is a lack of power. It’s not prodigious (205 hp / 156 lb-ft), but the 7,500 r.p.m. redline is good for performance driving given peak horsepower and torque are high in the rev range (7,000 r.p.m. / 6,400 – 6,800 r.p.m.). Power to the rear wheels is sent via six-speed manual or six-speed automatic transmission. Of note, output with the automatic drops slightly to 200 hp / 151 lb-ft. 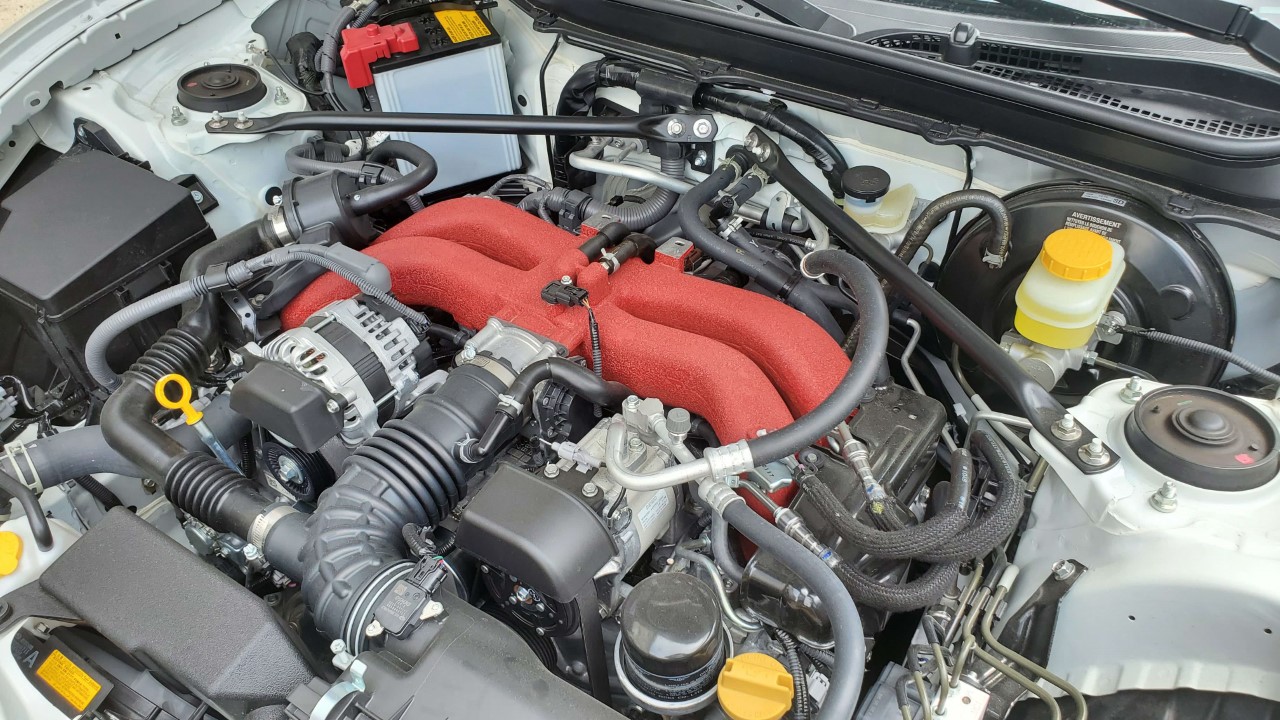 While I agree with those who say the BRZ could use more power, and that it isn’t particularly fast, it gets other sports coupe things right: light clutch, short throw shifter, direct steering response that doesn’t feel over-boosted and near 50:50 weight distribution. Sport-tech RS models also come with performance Brembo brakes (front and rear), upgraded SACHS dampers and bigger ventilated brake discs (326 mm front, 316 mm rear). A TORSEN limited-slip rear differential is standard on all models.

Combine these factors with a low (125 mm ground clearance) and wide stance, along with a fully independent MacPherson strut (front) and double wishbone (rear) suspension, and the BRZ has all the makings of a great driver’s car. While it may not blister a stopwatch, it feels light and responsive at speed, with flat cornering and a pleasing lack of understeer.

The BRZ is not a spacious car. I’d say that, among compact performance cars, only the Mazda MX-5, a two-seat roadster, offers a more cramped interior than this Subie.

That said, a lack of interior space will be viewed as part of the deal for most intenders because they understand it’s a sports coupe trade-off. These are things you just learn to live with. The back seat isn’t designed for humans, unless they’re small kids, and the trunk is tiny, but the rear seatbacks can be folded down. Storage space overall is quite limited and the cup holders are awkwardly placed. 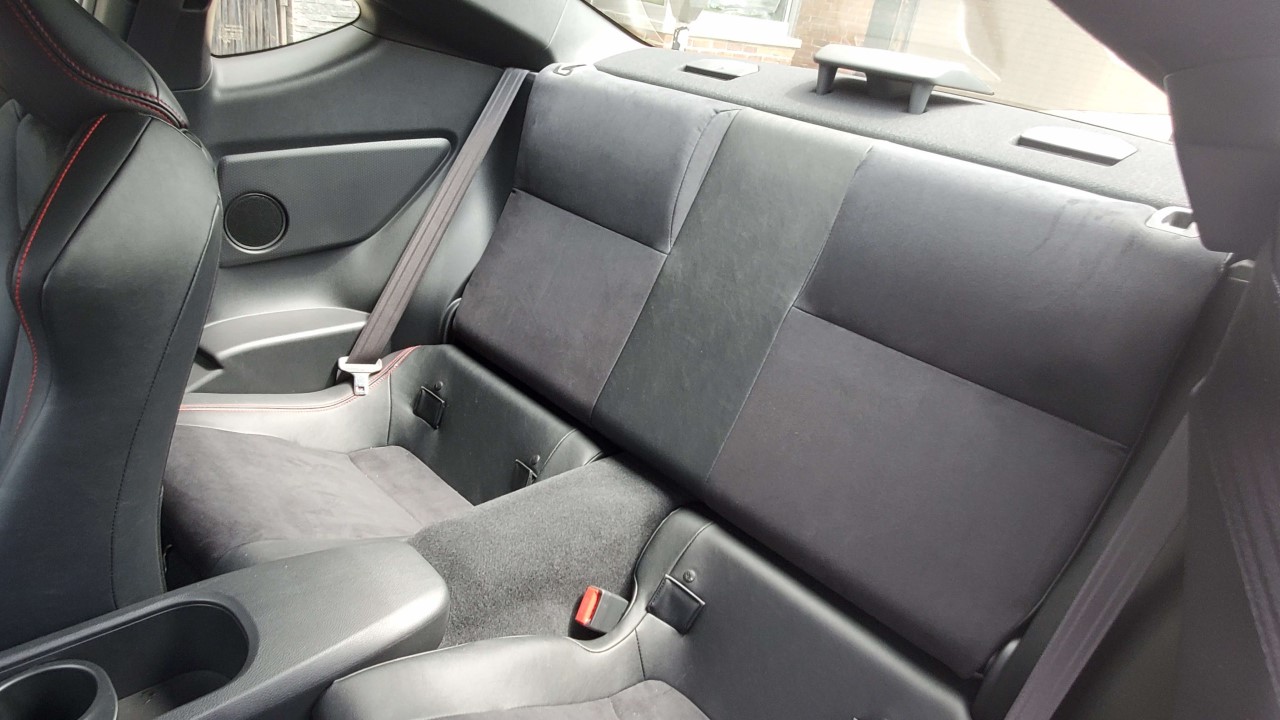 Despite space and storage drawbacks, the BRZ is handsomely finished and well equipped. The sport seats are finished in a grippy Alcantara suede-like material and offer a great deal of comfort and support. Door and dash trims feature attractive red accent stitching and Alcantara inserts, while the steering wheel, shift knob and parking brake boot are all finished in leather with the same red stitching accents. Plastics are also present, but the cheap stuff is kept to a minimum away from high-touch areas.

Another checkmark goes to the straightforward execution of knobs and switches. The BRZ is stripped of performance car gadgetry excess, and instead relies on basic instrument cluster readings and a standard centre stack to relay important information to the driver. As it should be.

In terms of ride quality and noise, the BRZ is a sports car, and it comes with sports car trade-offs. The knife-edge handling comes with a stiff ride that can be quite jarring over rougher roads, and the engine produces a fair amount of cabin noise.

A big plus in the cabin, however, is Subaru’s wise decision to make navigation standard across the BRZ model range, which Toyota has not done for the 86. On the downside, the infotainment touchscreen isn’t much bigger than the average smartphone (7-inches) and the display doesn’t have the highest resolution or most vibrant colour gamut. However, it is quite responsive, has many desired features and is easy to use. It comes standard with Apple CarPlay and Android Auto support, STARLINK smartphone integration, Bluetooth connectivity and audio streaming, SiriusXM satellite radio and more. 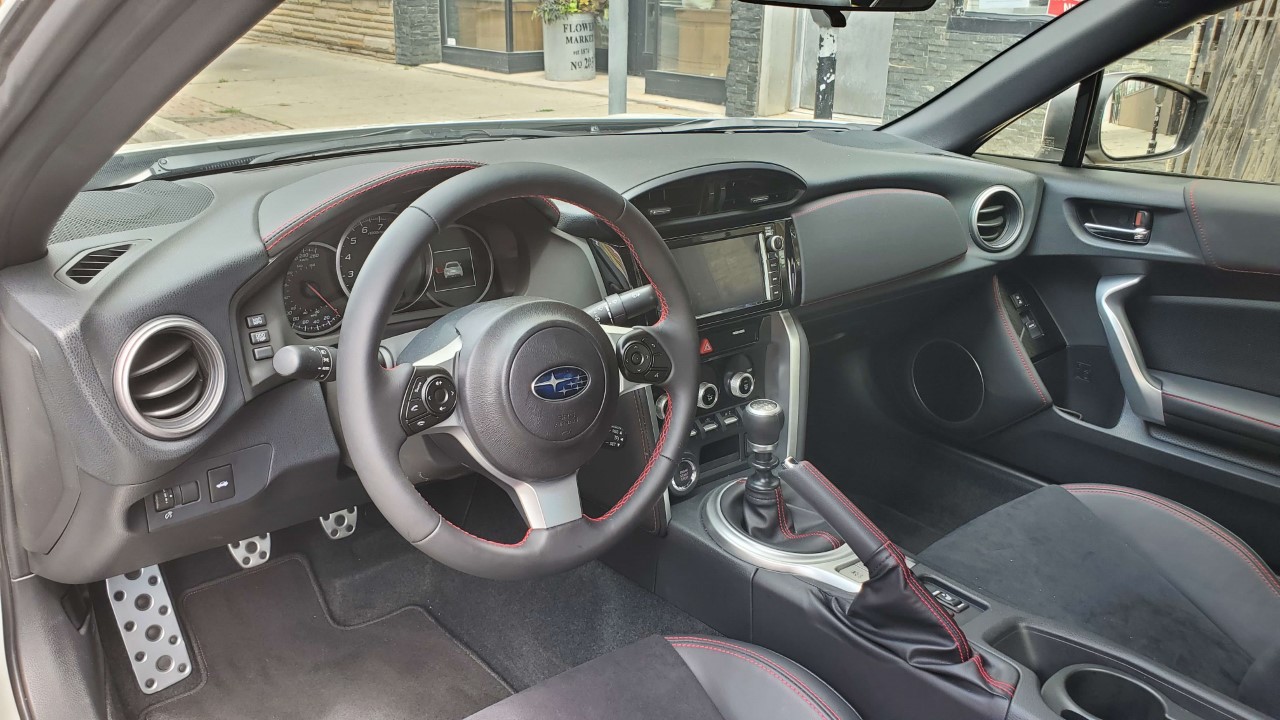 The Subaru BRZ comes as advertised. While not fast off the line, it feels quick and responsive at speed and offers a high degree of performance at an affordable price. If you’re looking for a rear-wheel drive sports coupe that’s loads of fun to drive and won’t break the bank, the BRZ is your car. Sure, it’s small on the inside and built on an old platform, but interested parties aren’t likely to care. Besides, the second-gen car will take care of those concerns. I think.