This is not your average Boxster

Back in the halcyon days of tiny, lightweight racing cars whose performance credentials rested not on sheer horsepower, but on the brilliance of their chassis engineering, Porsche developed a series of two-seat sports cars known as the 718.

From 1957 to 1962, the 718 in its various iterations chalked up numerous victories from Le Mans to Formula One – powered largely by a 1.5 litre, 4-cylinder engine delivering only 142 horsepower. Needless to say, that legacy was one Porsche thought worthy of invoking when it introduced new turbocharged 4-cylinder versions of the 2016 Cayman and Boxster and dubbed them 718s.

Porschophiles, however, weren’t exactly enamoured of the engine’s characterless performance and engine note.  Sure, they could opt for the sublime Cayman GT4 with its 385 hp flat-six and manual six-speed gearbox – if they were lucky enough to score one of the very limited production two-seaters. Or they could have settled for its topless Spyder sibling, detuned by 10 hp and with a softer suspension derived from the Boxster GTS.

The softly-rounded Boxster has always struck me as bland, a safe way of acquiring the cachet of the Porsche brand. But the 718 Spyder isn’t just a Boxster with a few added performance goodies – it’s a cloth-top GT4 with genuine track-focused ability. It doesn’t take more than a quick look to distinguish one from the other. The 718 Spyder’s jutting lower lip splitter, enormous 20-inch wheels, and rear flying buttresses suggest it’s far more at home carving corners than cruising to the local hot yoga studio. 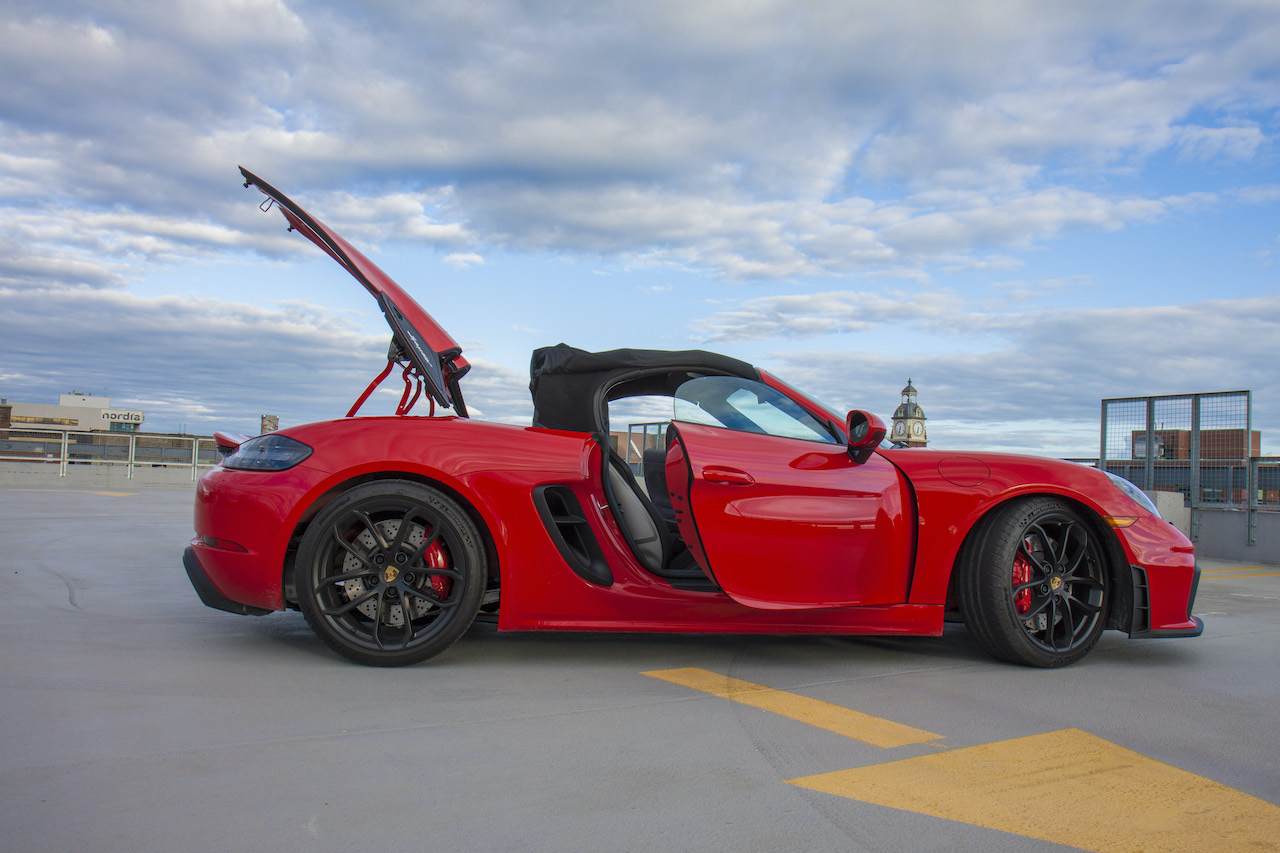 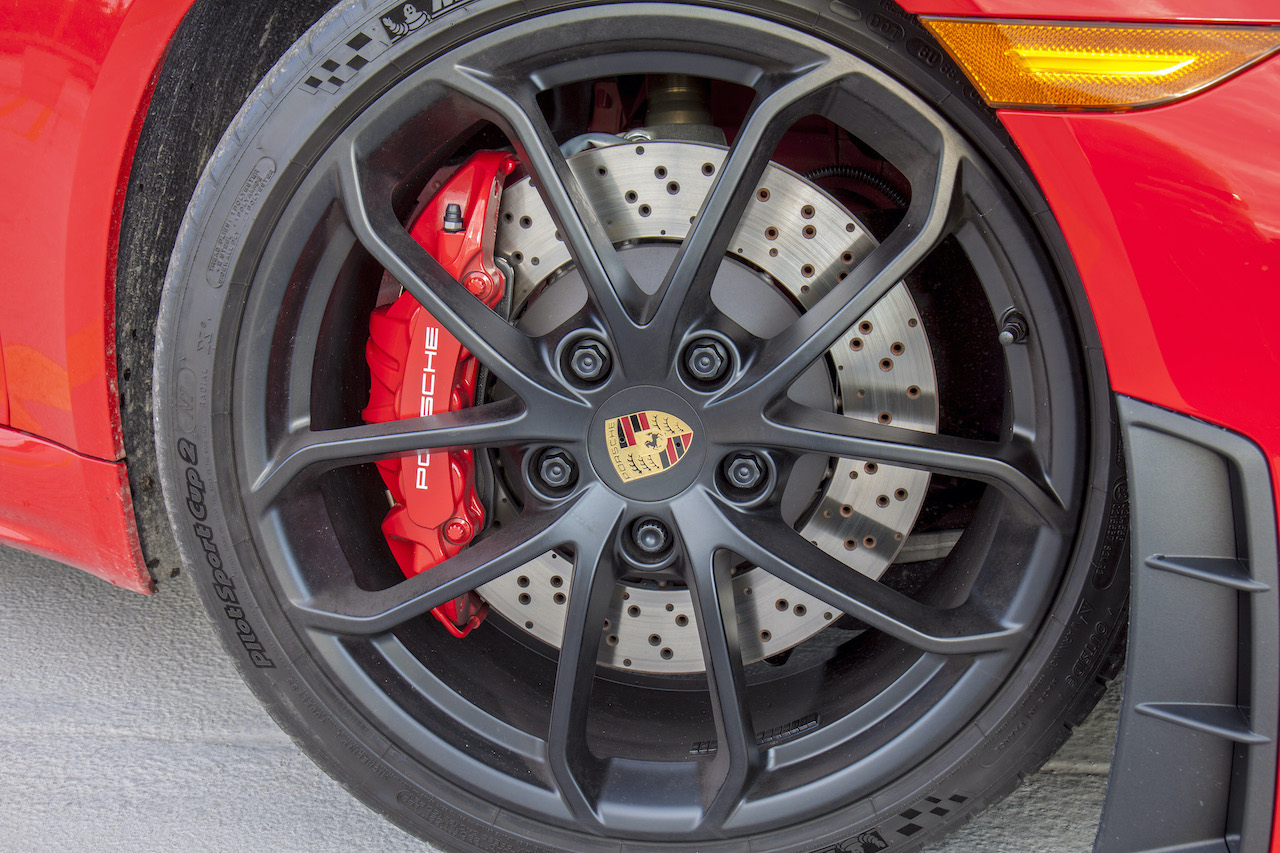 Our tester featured 18-way adjustable suede sports seats. A $3,000+ option, they’re a lot more comfortable for a daily driver than the highly bolstered race seats in the recently driven GT4 which only slide fore and aft.  Snug, yet well laid out, the cockpit is bisected by the centre console with its familiar bank of switchgear shared by most of Porsche’s lineup. The suede wheel feels solid and grippy, the perfect conduit for inputs and feedback.

If the Spyder’s looks suggest that it’s more than your average Boxster, its performance seals it. The Spyder sits an inch and a half closer to the ground than the Boxster, and its chassis rides on a suspension setup derived from the 911 GT3.  Adaptive dampers, a limited slip differential and torque vectoring deliver superb handling.  Add a low centre of gravity and the inherent balance of a mid-engine setup, and you’ve got a car that not only stays composed no matter how hard you drive it. The drivetrain is the perfect complement to the Spyder’s handling.  A naturally aspirated version of the 911’s turbo-six that’s been bored and stroked to 4-litres, it puts out 414 hp and 309 lb-ft of torque. While only slightly more powerful than the turbo-four powered Cayman GTS, it redlines 1,100 r.p.m., higher to 7,600. The Spyder sprints from 0-100 km/h in 4.4 seconds which is really no quicker than the 4-cylinder Boxster, but at 1,495 kg it’s quite a bit heavier. It just feels faster, and that’s largely attributed to its near telepathic steering, unshakeable handling and sublime six-speed gearbox and the sense of joy they impart to those who truly love driving.  At full bore, the engine booms and roars and totally negates spending the extra dollars on a fancy Burmeister sound system.

While Porsches of old delivered little more than a steering wheel and running gear with everything else an expensive option. Even Zuffenhausen has conceded that connectivity, comfort and technology are necessities in today’s competitive market.  For a car that starts at $110,000, there’s a depressingly short list of standard features, since the Spyder’s focus is on stripped down performance rather than luxury cruising. 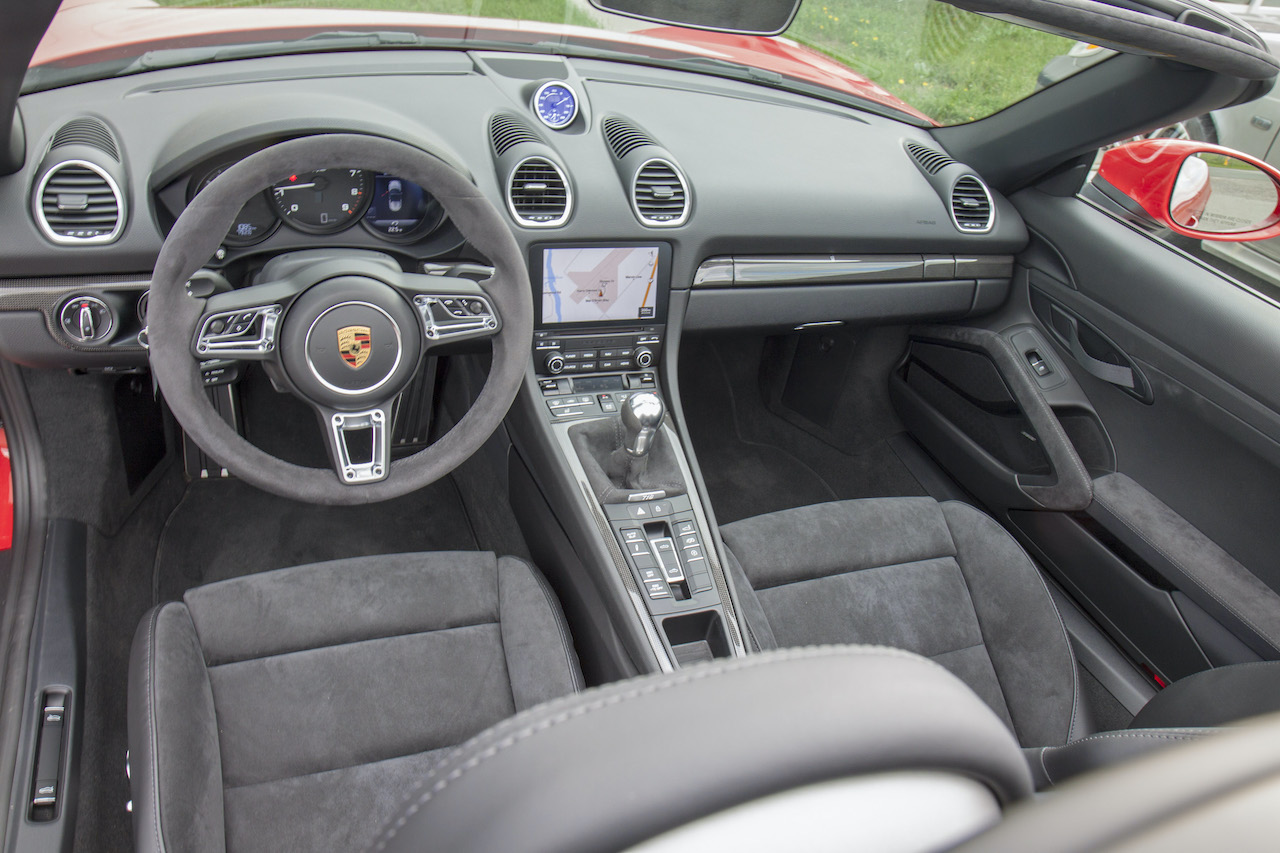 Our tester came equipped with the Porsche Connect Package, a $2640 option that included a 7-inch touchscreen with Navigation, and Apple CarPlay (but no Android Auto). It’s small and dated, but that’s probably a moot point for most enthusiasts. Because adaptive cruise control, lane-keeping assist and other such semi-autonomous features are usually bundled into the operating software of the automatic transmission, they’re not available on the manual-only Spyder.

Official fuel consumption ratings for the Spyder are 14.3L city; 10.3L highway and 12.5 L/100 km combined. Thanks to cylinder deactivation during light load I managed as low as 9.8L/100 km on the highway; though my overall consumption was closer to 14L thanks to an inability to resist pinning the throttle over the glorious rolling hills of Northumberland County.

If there’s a fly in the ointment, for many enthusiasts it is but a minor irritant. Stowing the Spyder’s roof is several minutes of frustratingly complex aggravation, where in a $35,000 Miata, the roof neatly deploys with a touch of a button while you remain comfortably seated. My partner on the other hand, managed it easily – but then  he’s an engineer who can fold fitted sheets.

Despite the confusing message of its 718 badging (it’s a modern Spyder that pays homage to the original four-cylinder by differentiating itself from the modern four-cylinder with a 911 flat-six) the Spyder truly does honour Porsche’s heritage by delivering sublime handling and an engaging driving experience. 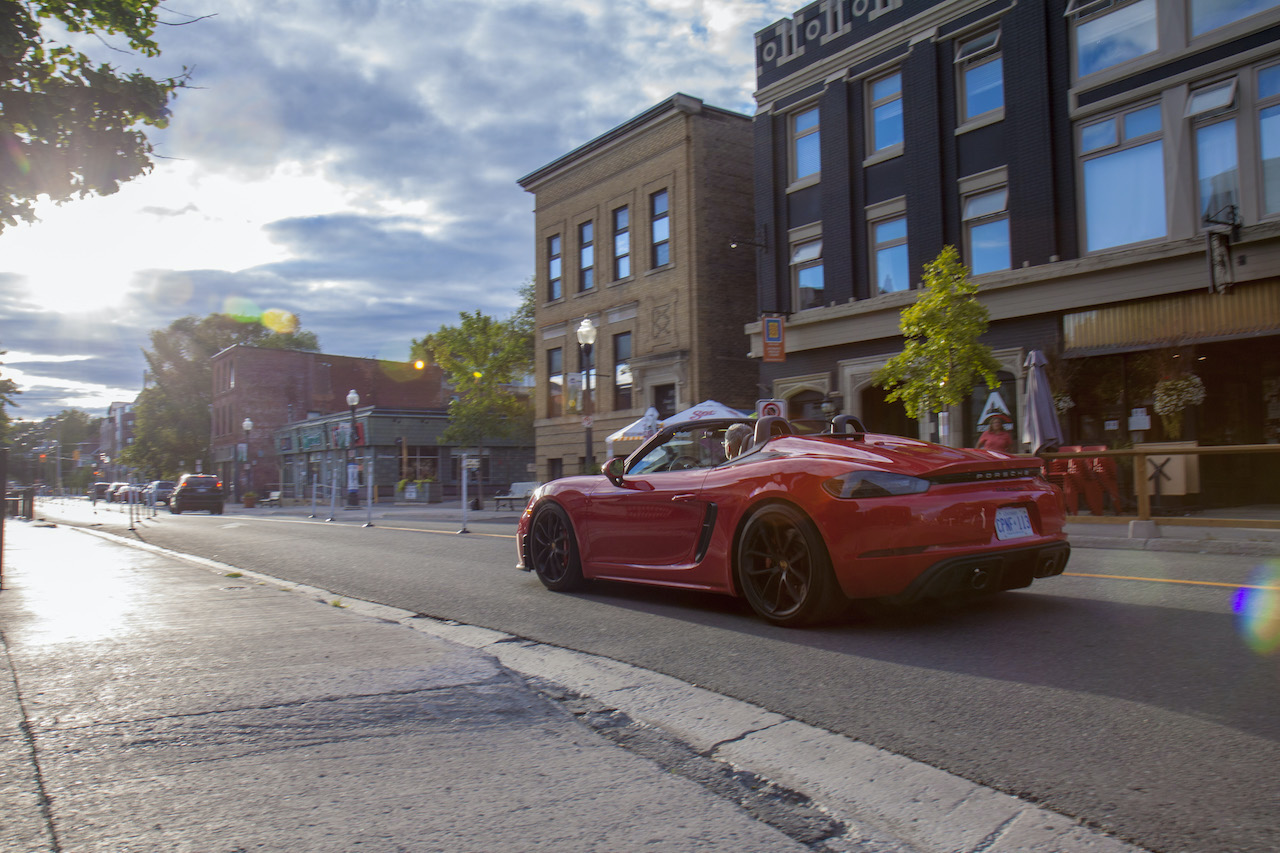