Styling accomplishments and little touches make this a well-styled car

The Mazda6 has to be one of the most if not misunderstood, then underrated mid-size sedans in recent memory.

When it debuted in 2002, right away it was one of the best-looking sedans on the market. Modern in all the right ways and somewhat classic in others, it made the Honda Accord, Chevrolet Impala and Toyota Camry of the era look positively pedestrian on the styling front.

A huge turning radius and some interior foibles let the 6 down a little, but that didn’t stop Mazda from trying as they subsequently released a wagon version, a hatchback version and an all-wheel-drive, turbocharged Mazdaspeed version. That last one has recently gained cult status like few other early ’00 vehicles we can think of.

Then, in 2007, the second-generation version came and once again it rewrote the styling books with even angrier-looking headlamp lenses and low stance. There were no more Mazdaspeed, wagon or hatch versions in Canada but the one version we did get improved on the old one in every way.

Which brings us to the car you see here, that being a 2020 model. This marks the fourth year it has existed in its current form.

And what a form it is! 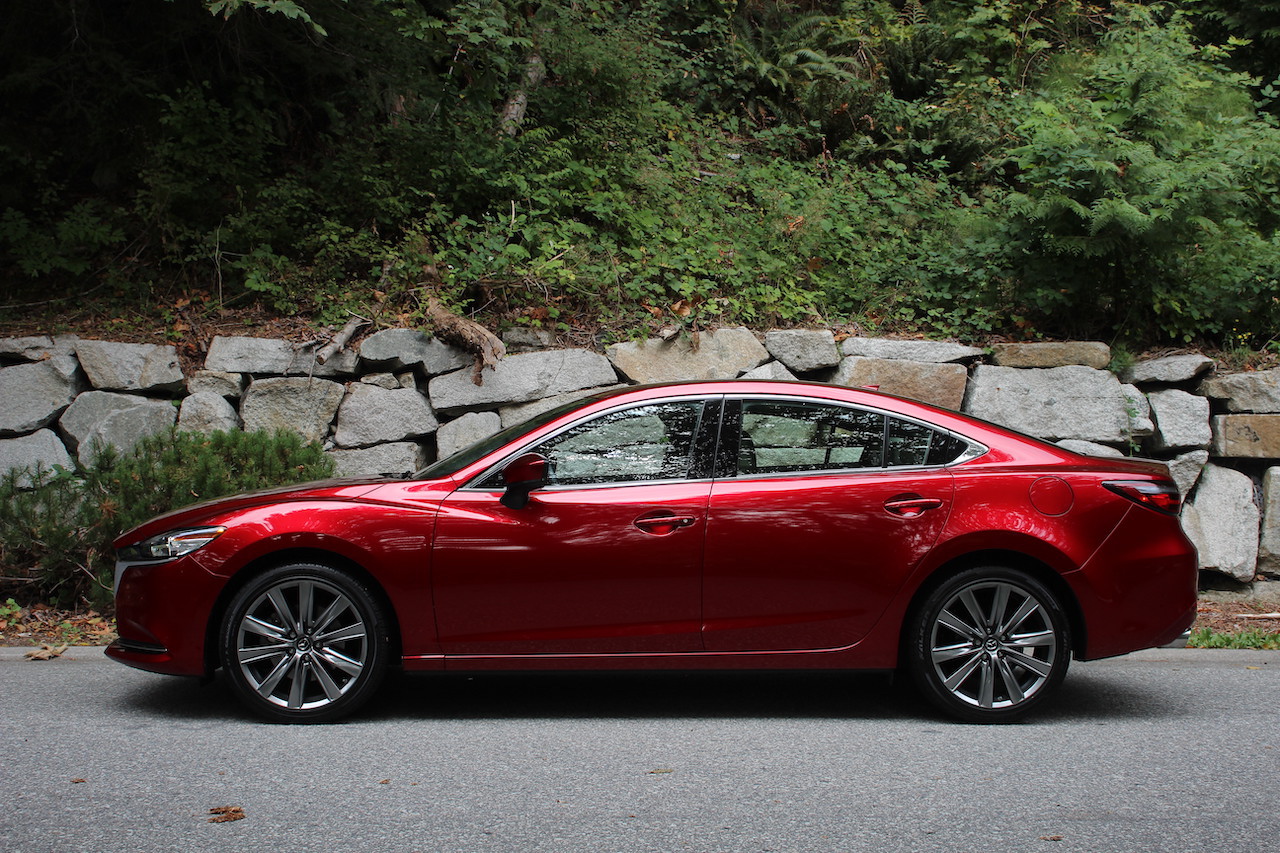 It starts with the Soul Red Crystal Metallic paintjob, which remains the absolute best paint you can get on a non-luxury sedan or crossover today, bar none. It’s super deep, looks rich and just candy apple enough without seeming aftermarket.

The styling accomplishments continue with the fantastic headlight and grille shape, smoked 19-inch 10-spoke alloys and all the little touches that make a well-styled car just that: intriguing wing mirror shape, subtle creases above the rocker panels and slightly flared front fenders. The twin tailpipes and the chrome bar that connects to taillights provide a nice finishing touch.

Inside, it’s a little more buttoned-down – the Hyundai Sonata and Honda Accord both feature more adventurous interior lines – but the white leather that my Signature trim tester had make it airier inside and just a little bit flashier as well. The leather colour is one thing, but it’s also real and of the Nappa variety, which is a signature of, well, the Signature trim. Other touches include real wood inserts, bits of suede here and there, and LED interior lighting.

That’s in addition to all the good stuff you already get on the GT model -11-speaker Bose audio, heads-up display and navigation – which sits just below this in the 6 line-up.

A quick note on the Signature trim. Remember that unlike so many of its competitors, Mazda does not have a luxury arm as Honda does with Acura, or Toyota does with Lexus. That means that the top trims offered on any Mazda product have to be good enough to maybe steal a couple of sales away from the other guy’s luxury division. So they have to be good and all those features combine to make the 6 Signature’s interior accoutrements very good.

Space-wise, the front-seats are on-par with the competition, and the driver’s seating position a little better than most, but the back seats are more cramped than what you’d find in either the Accord or Camry. Not exactly sure where the space is lost to those two as the overall footprint is roughly the same, but I know I was more comfortable sitting in the back of the Accord I’d driven a week prior. There’s also less storage in the Mazda than there is in that car. 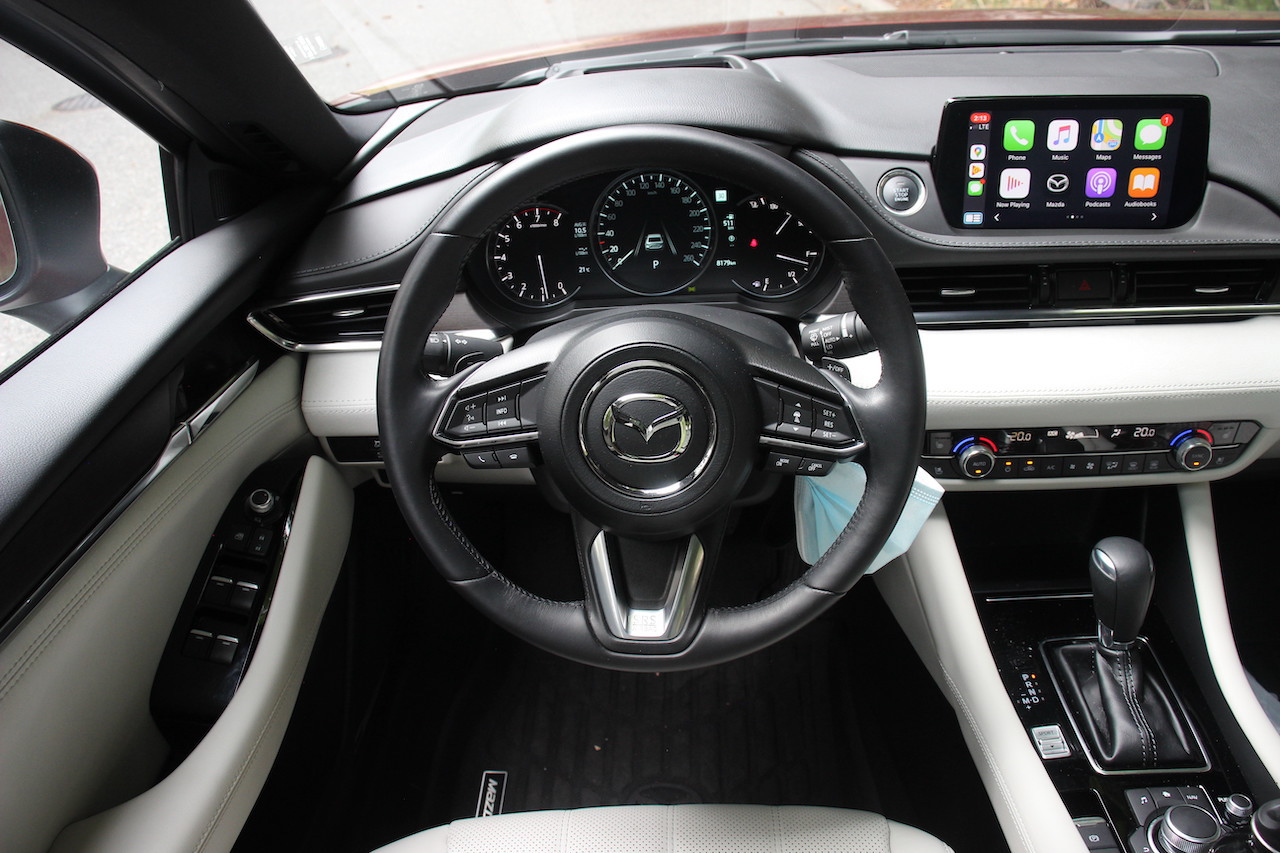 The 6’s powertrain, meanwhile, is another feather in its cap.

In GT and Signature spec, it gets a 2.5-litre turbocharged four-cylinder as standard, and it’s good for 250 horsepower and 310 lb-ft of torque. It should be noted, however, that unless you fill your 6 with 93-octane fuel, that power figure drops down to 227 hp according to the manufacturer. That’s a pretty big drop and considering that 93 octane is tough to come by – only Chevron offers the good stuff here in Vancouver, for example – you’ll want to keep that in mind if power is number one on your punch list.

Torque doesn’t change, though, which is a good thing because this is one fast vehicle once you get up and running, even though you’ve only got a six-speed automatic transmission to work with while the competition goes to more ratios or continuously-variable automatics. Highway passing at speed is a breeze – a joy, in fact, because it’s here that you really feel the smooth, deep-chested torque that this engine provides. Almost every time I dipped into the throttle during my test, I was consistently surprised by just how fast the Mazda6 felt.

Fast and very light on its feet, as well. Mazda’s penchant for making fun-to-drive vehicles for almost every segment they venture into is well documented, and the story is very much the same here. 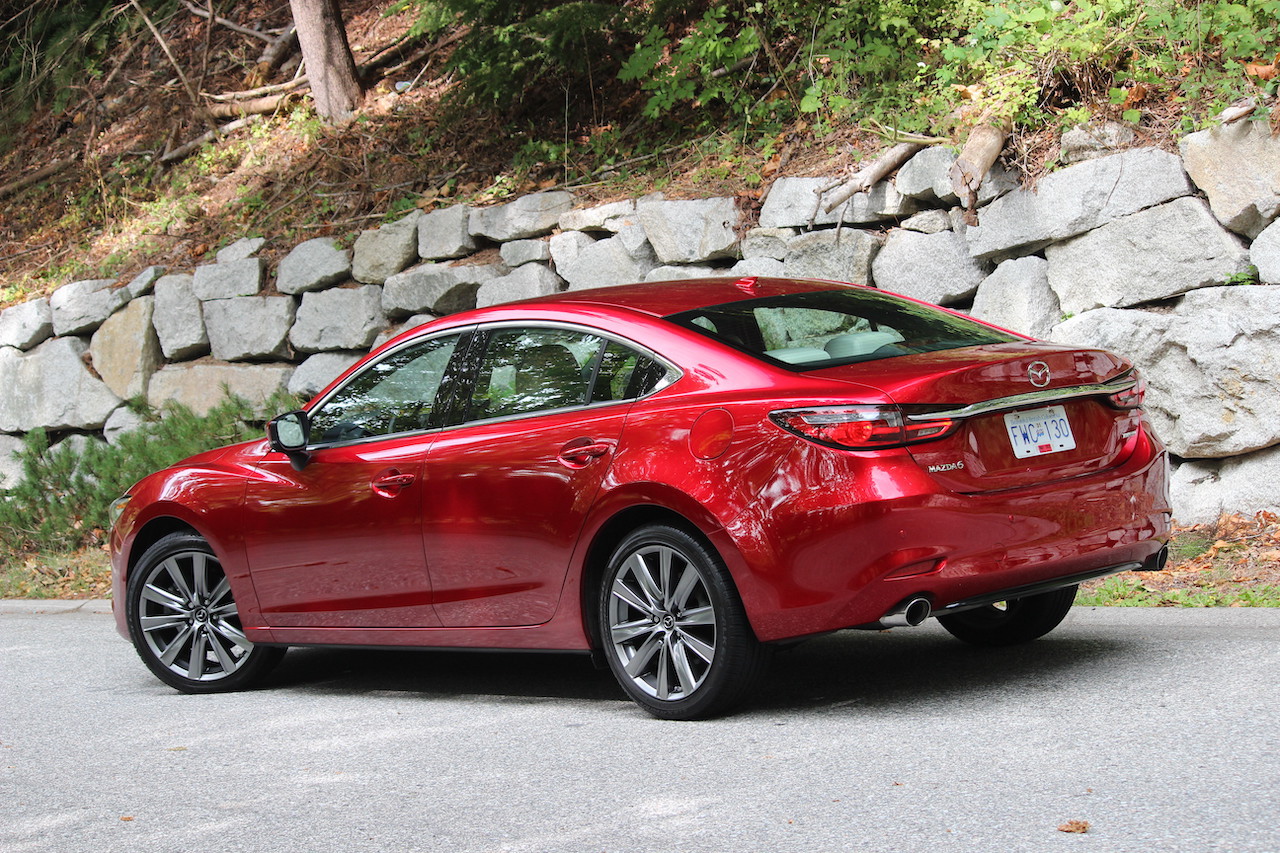 Turns of the nicely compact steering wheel are met with immediate response from the front end thanks to a lively steering rack. Might be a little too lively for some, actually, but personally I think the steering’s response and weight is right on. There’s even a modicum of feel through the wheel, so you know what the font end’s up to most of the time. At the end of the day, this a car that drives much smaller than it looks, and that is a very good thing.

Thing is, though, the Mazda6 is still a sedan and the cost of getting a Signature version of the all-wheel-drive CX-5 crossover is only about three grand more than the 6 when all is said and done. Like so many mid-size sedans today, that’s going to me a tough hill to climb for buyers when it comes time to consider one or the other.

Of course, pricing isn’t everything and maybe you want the luxury and athleticism that a mid-size sedan provides over a CUV. If that’s the case, then the 6 is a very compelling choice. 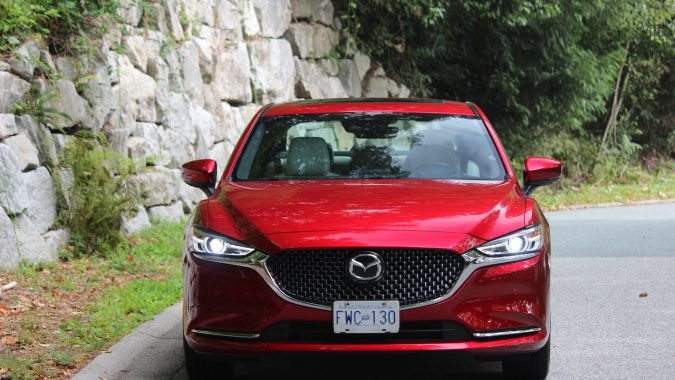 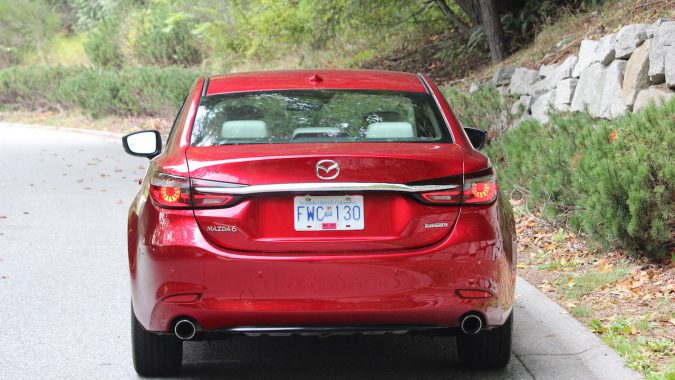 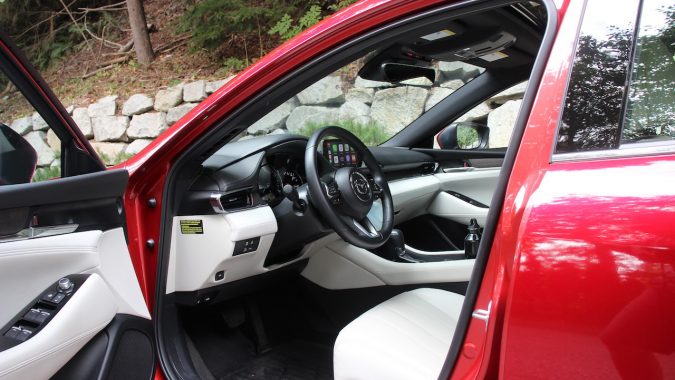 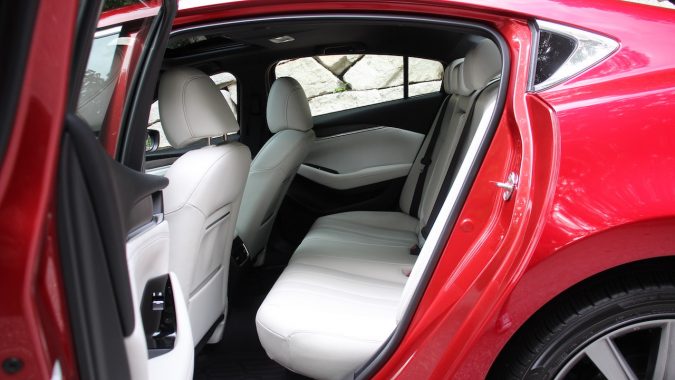 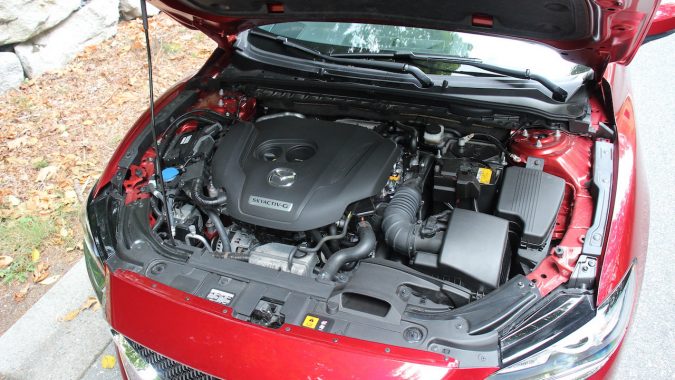 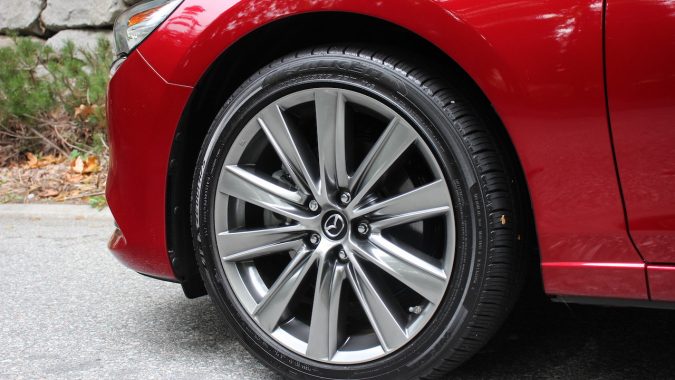 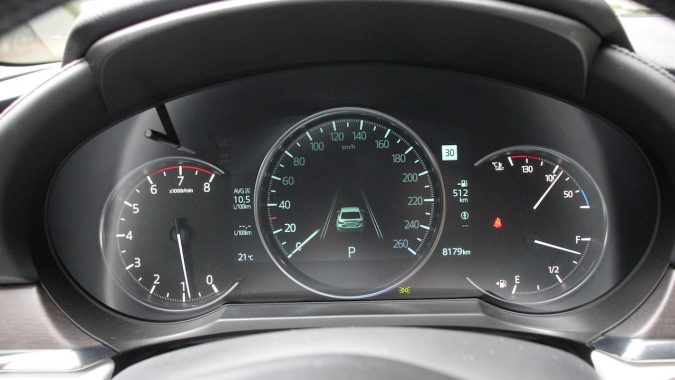 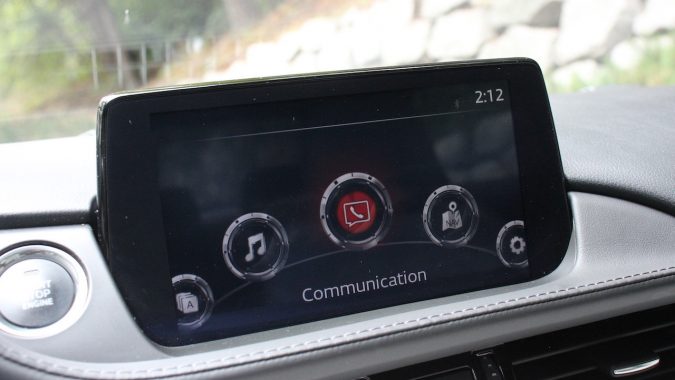 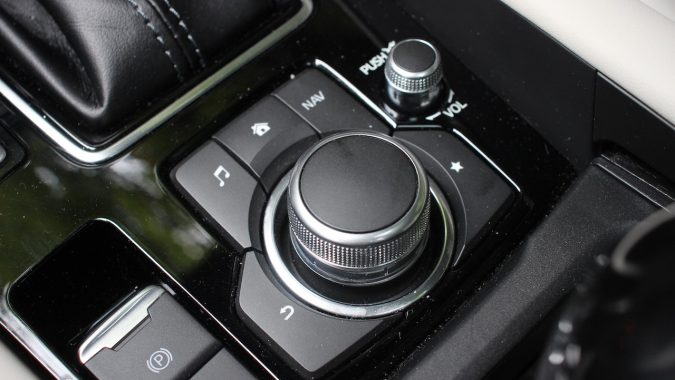 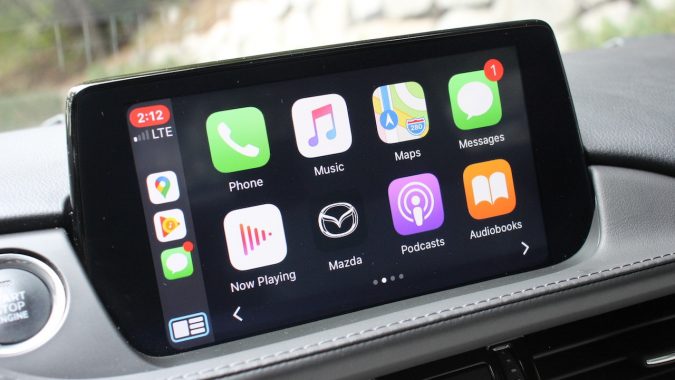 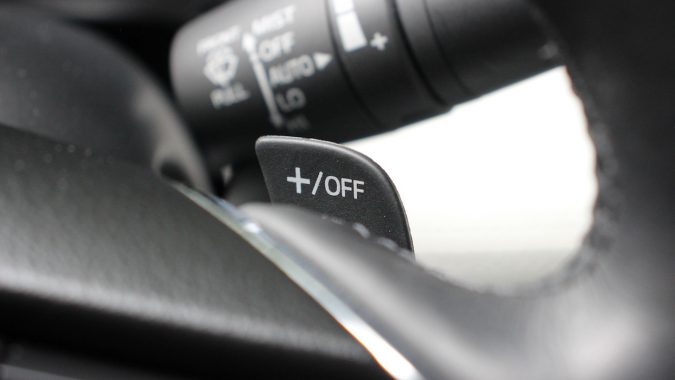 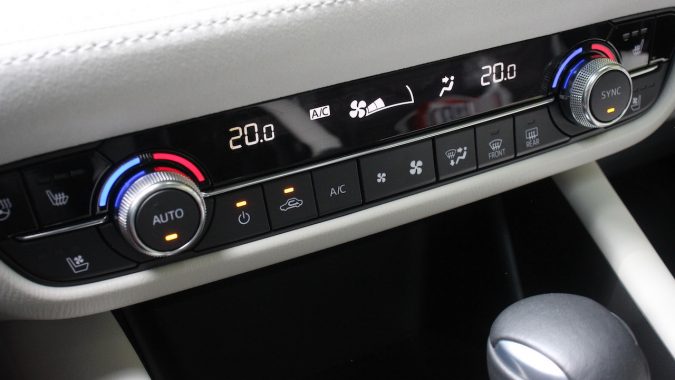 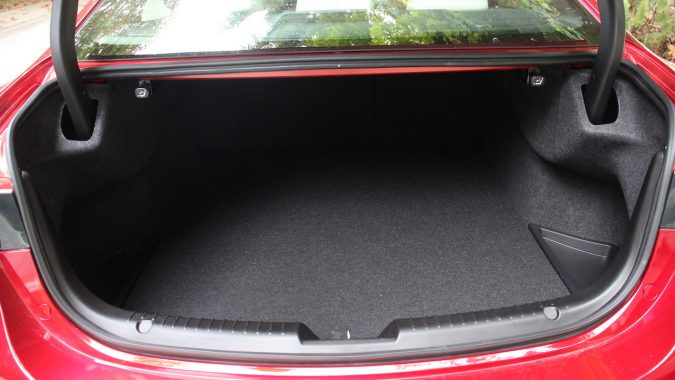 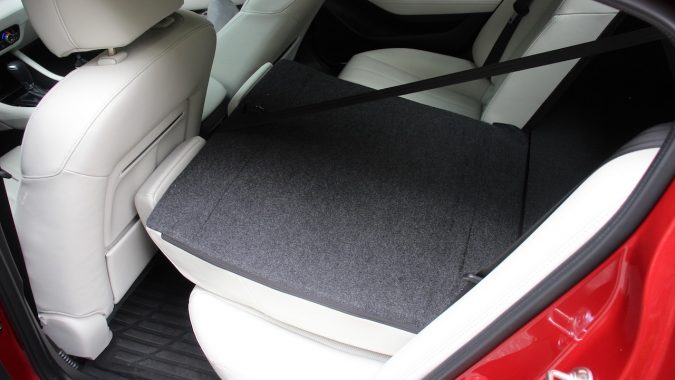 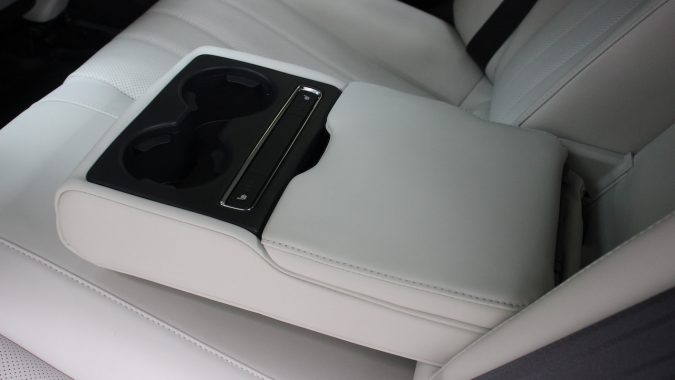 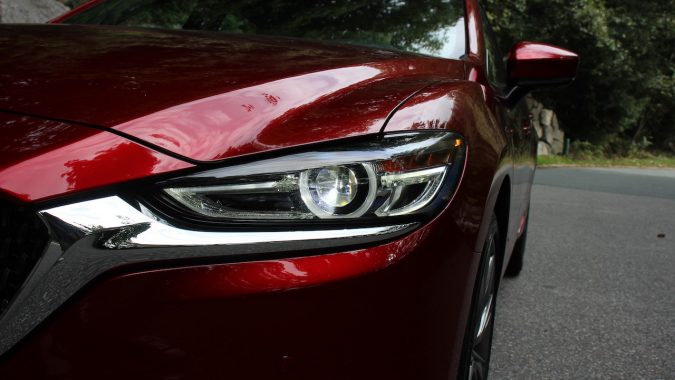 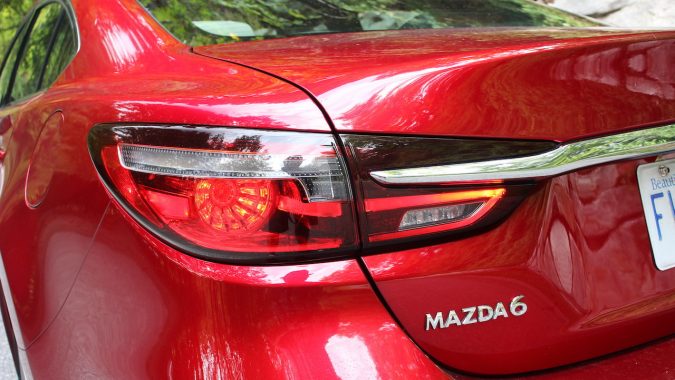