A car with much to love and a few very annoying things to hate.

Let’s cut to the chase shall we? I would recommend buying a Lexus IS 350 AWD.

If you’re directly comparing this car to say, an Acura TLX or BMW 3 Series, just stop now. Buy the Lexus. Forget about the TLX in particular. Every single thing a TLX is trying to be, the Lexus IS 350 already is. The TLX is to the IS 350 what a knock-off watch is to a Rolex. Sure they might look similar and they do mostly the same things, but the quality of one far exceeds the other.

I sincerely did not think this would be the case. I was under the impression that all Lexus cars, particularly the IS, were the automotive equivalent of designer handbags. Fashion accessories for someone who primarily ferries around shopping bags and hand-held dogs— a status symbol for the Gucci-buying Yorkville class. 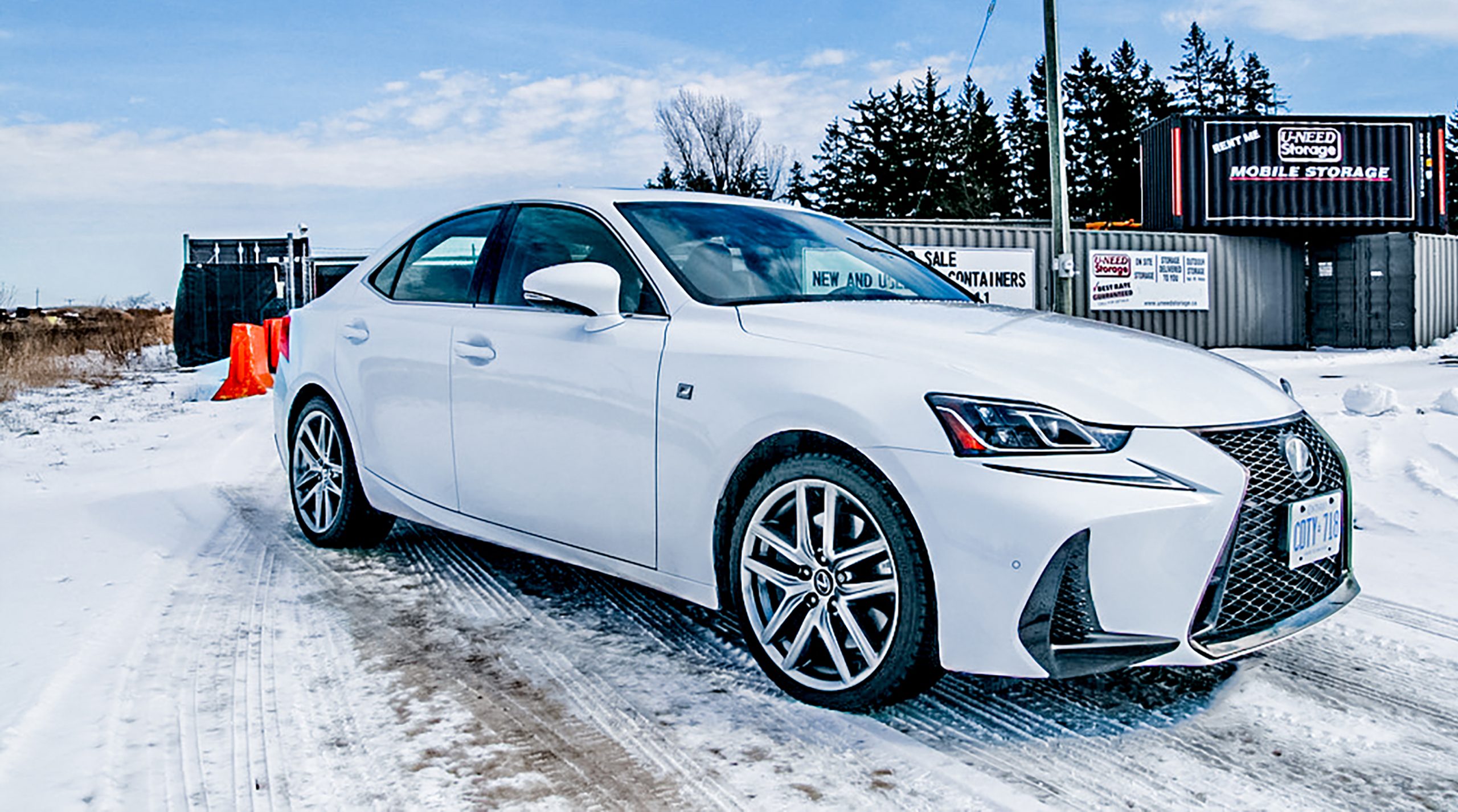 While that might be true on the surface level, the Lexus IS 350 AWD is also just a magnificent car to live with every day. As a car, it is everything you need it to be and does everything you want to do near perfectly… Well, almost everything. Because while the vast majority of the IS  experience is sublime, there are few notable nitpicks that will pick your nit so badly, you’ll want to smash your face into a wall Bird Box style.

Everything that’s great about the IS 350 AWD

It has the most comfortable seats in a car that costs less than $80,000. The fit and finish is absolutely spectacular. Cadillac wishes its doors sounded as nice when you close them. The interior is brilliantly ergonomic—the car knew where I wanted to rest my arms before I did. But my favourite bit is a small shelf next to the infotainment screen where you can rest your phone without it sliding around. Brilliant. Everything you touch feels magnificent. Even the headliner, which you will never touch or look at, feels of quality.

It comes with every modern convenience and infotainment option under the sun, but the highlight is definitely the sound system. The IS 350 is equipped with a 15-Speaker Mark Levinson Premium Surround Sound System which freaking thumps. I absolutely recommend it. 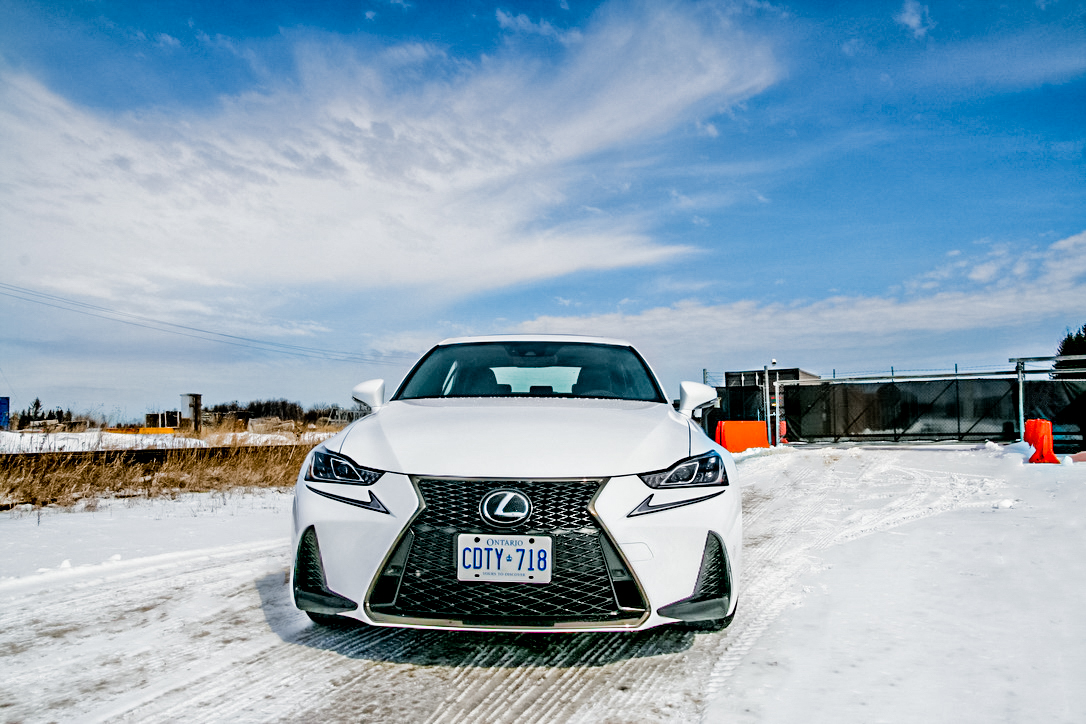 Driving wise, the steering input is excellent. The brakes bite like a great white shark. The AWD handled every terrible surface and snow storm I threw at it with ease. And most appealing, this car is very motivated.

The IS 350’s 3.5-litre DOHC VVTi V6 is just a great engine to have under your right foot. It’s 311 horsepower is more than sufficient. Combined with a quick-shifting 6-speed automatic transmission and the AWD system, power goes to the ground efficiently… but also with a bit of an event. The car puffs its chest out a bit before very eagerly rushing by slower commuters. For a car that’s mostly just comfortable and easy to drive, it takes the time to remind you that you paid for the larger engine and life should be exciting sometimes.

Then there’s the LFA-inspired digital RPM gauge where a ghosted needle holds its place for just a second when you shift gears. I don’t care if it’s a gimmick. Take my money. It’s so cool.

It gets reasonable gas mileage as well. Lexus estimates a combined average of 10.9 litres per 100 kilometres, but even hooning it almost constantly I managed a 9.9 average.

Finally, I actually like the way it looks. Is it “beautiful” with its LSD trip-inspired front-end? No. But it is striking and in a world where all cars are becoming more homogeneous, the Lexus actually manages to stand out. I don’t know if a BMW 3 Series can say the same thing.

Everything that’s awful about it.

Alas, there are things I wholeheartedly despise about this car.

First and foremost is the absolutely ridiculous “mouse” that you use to navigate the car’s infotainment screen. It is near indescribably terrible to use. It’s the digital interface equivalent of a shopping cart with a broken wheel.

As a test, I asked my girlfriend to use the mouse to select a certain radio station while I was driving. I kid you not, it took her ten minutes of pure concentration to get to that radio station. She is a trained graphic designer. She works with technology every day. She is a very smart and intuitive person. 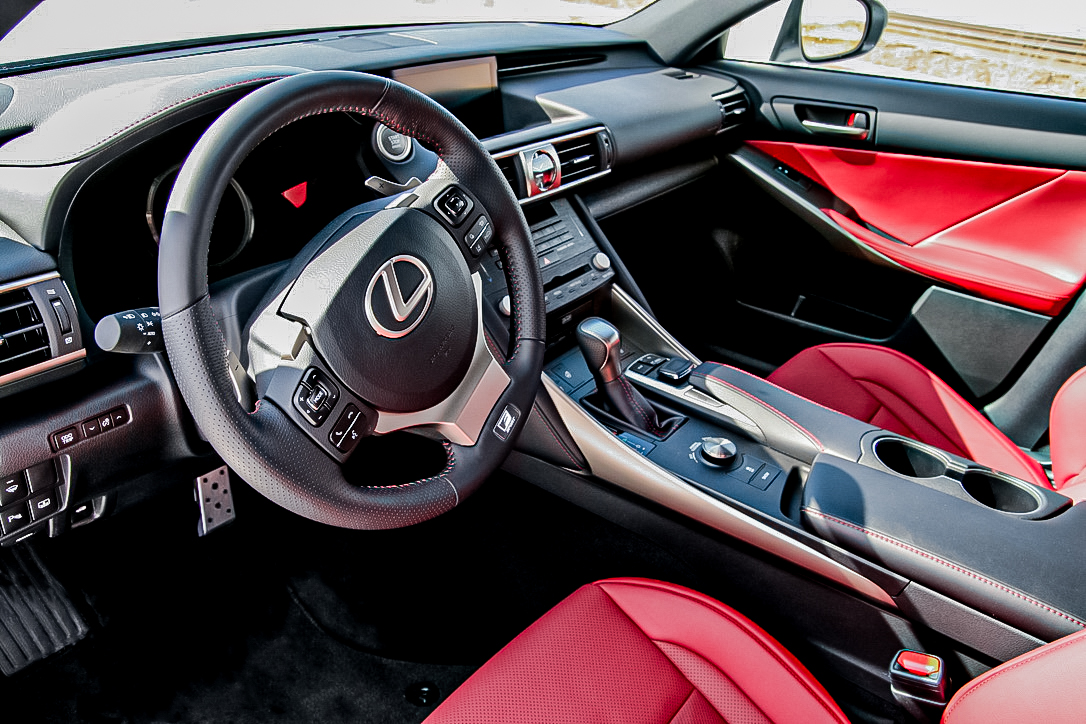 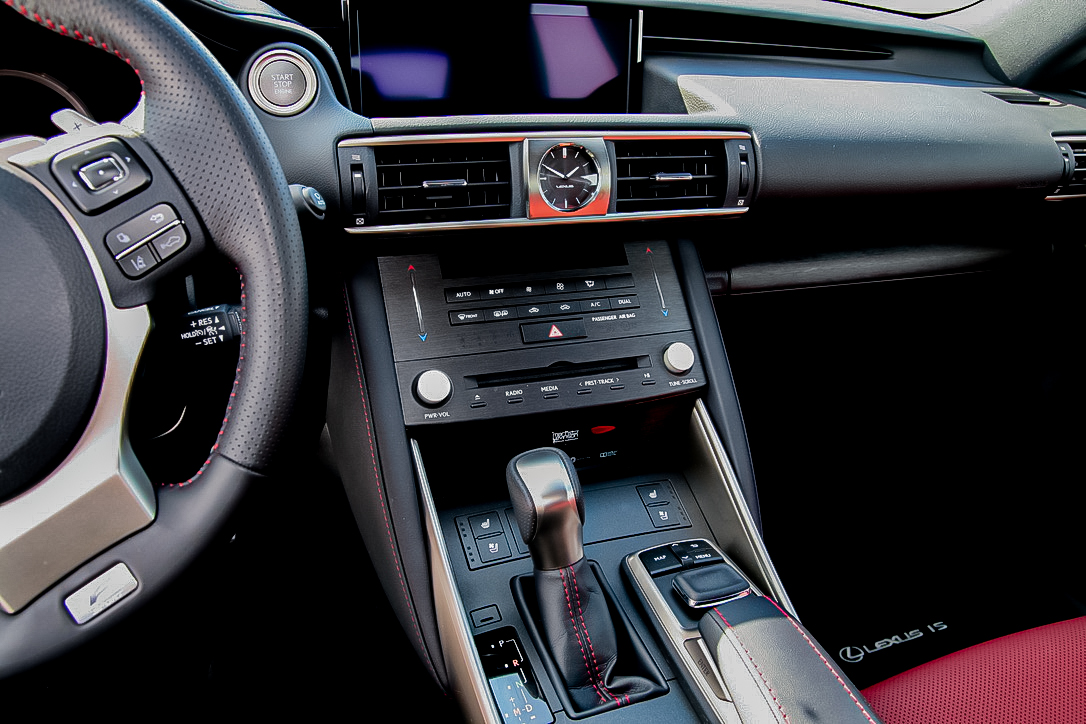 What was wrong with buttons? I knew the buttons. I liked the buttons. At least let me just touch the screen! Who looked at an iPhone and thought, “You know what this needs? A mouse.”

Kill it with fire. It’s the worst user interface I’ve ever experienced on a car. Ever.

I also think the steering wheel looks like an Xbox controller and is totally out of place with the rest of the streamlined interior. And why is the logo on it so big? I bought the car, I know what I’m driving. Looks like it was designed by a 9-year-old. Or by someone looking at golf clubs all day.

Let’s all just agree that white is definitely the wrong colour for this car. Combined with the red interior, the whole thing is very My Super Sweet Sixteen.

The F-Sport package? Forget it. It’s an extra $3,850 for some triple beam headlights, 18” rims and an “aero package”. No horsepower bump. No suspension upgrades.

There is a lesser-tier package that’s $1,300 for just the aero package and the rims, but honestly, $1,300 will buy you a pretty decent set of aftermarket rims if that’s your concern. Also you’re not doing top-speed tests. You don’t need an aero package.

And really the price is the main thing holding this car back as an obvious buy. With all the bells and whistles, it’s basically $60,000 out the door. As nice as this Lexus is… that’s still a lot of cheddar.

If we’re using the watch metaphor, yes a Rolex is a Rolex. It’s very nice. But nobody is going to judge me for having a Fossil. Looks the same, quality is sufficient. Heck, it might even make me look less like a slimey posh elitist—more blue collar, you know?

The Fossil watch is basically a Dodge Charger in this metaphor. 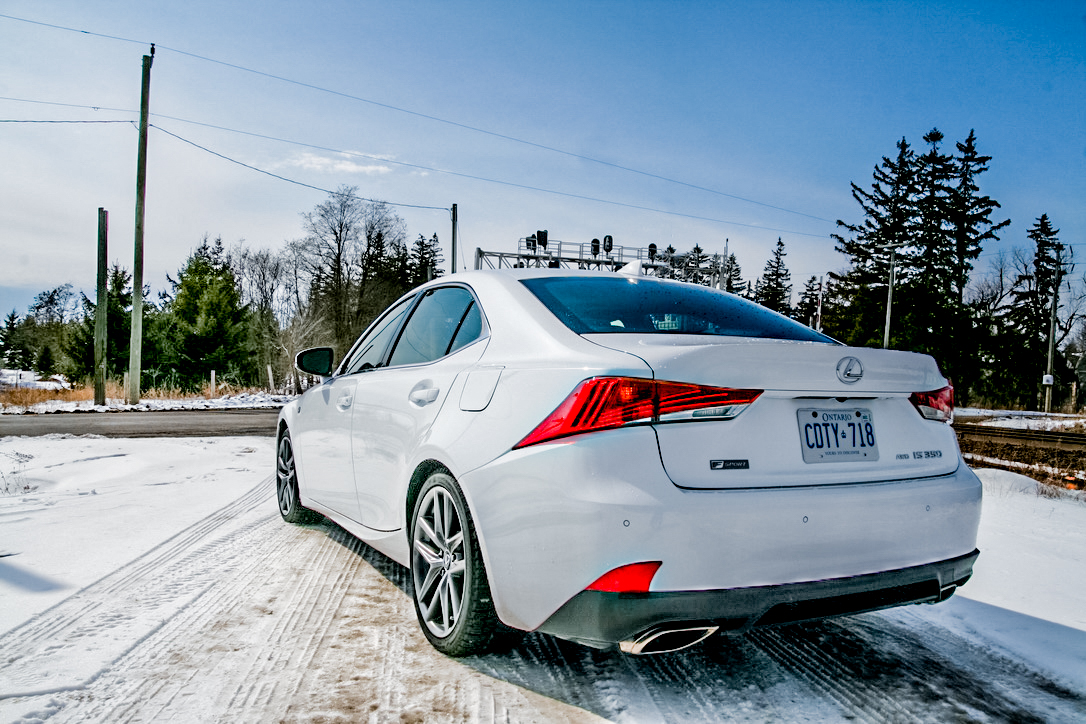 I might recommend the lesser IS models— the 300 and 300 AWD which start about $10,000 cheaper than the 350 AWD. But you don’t get that really great 311-horsepower V6 or that thumping Mark Levinson sound system.

Not getting the F-Sport package will save you some cash. But I think this car would be a much more competitive buy if Lexus could find a way to shave about $3,000 – $5,000 off its base price.

Don’t get me wrong, I still recommend the car, even with its current window sticker. But it just pains me that the TLX A-Spec beats it out on price.

I’m sure there’s $5,000 worth of stuff you could lose from this car without anyone noticing. You don’t really need a nice headliner, for example. I’ll never even look at it. You definitely don’t need that stupid mouse, that’s for damn sure.

Just saying, a little cost cutting might not hurt, Lexus. As long as the broad experience of this car remains the same, I’d still think it was fantastic.

I’m serious about that mouse, though. With fire. 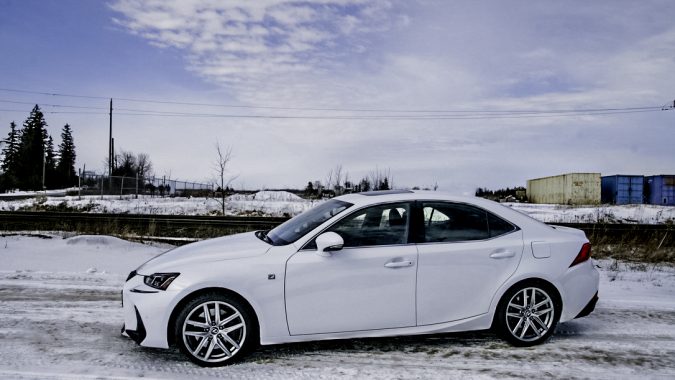 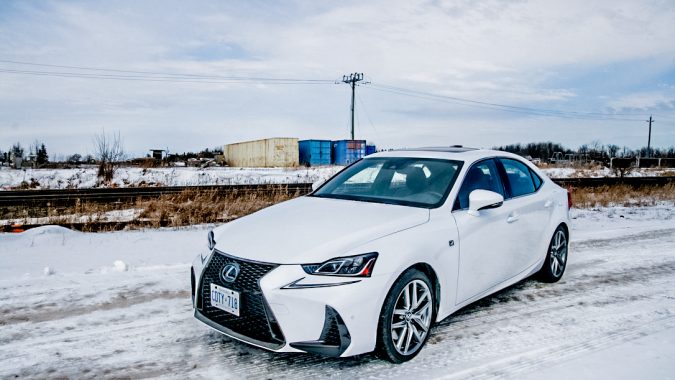 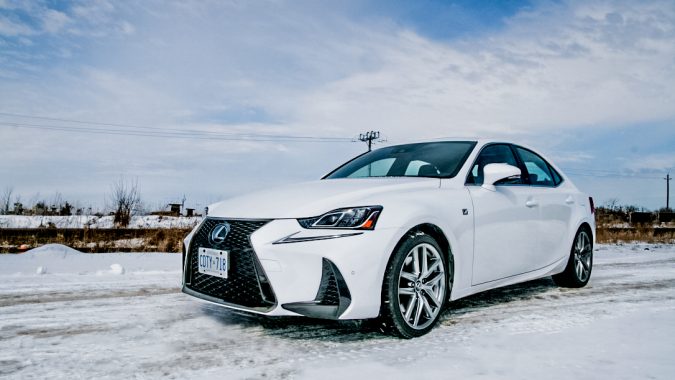 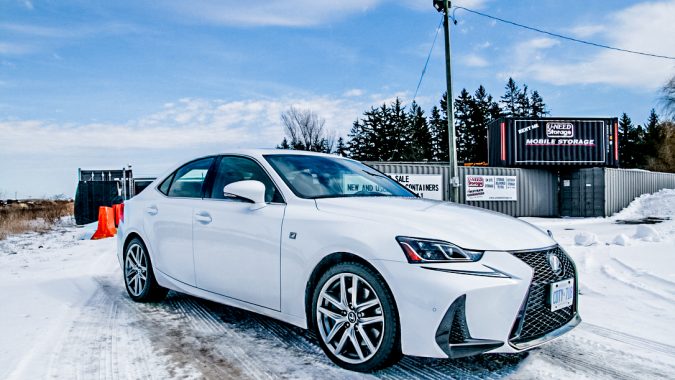 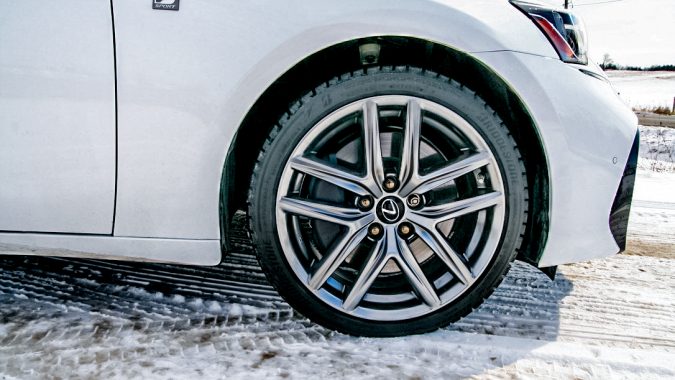 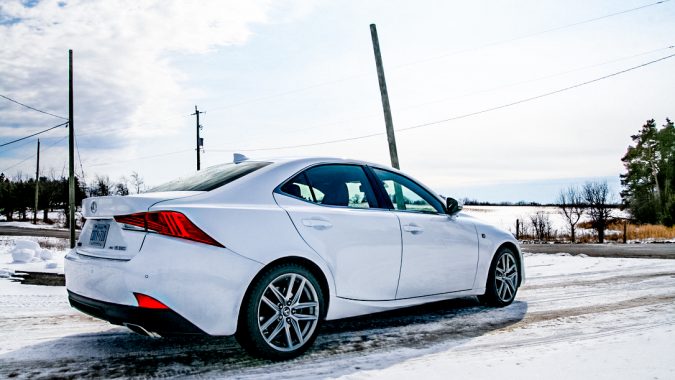 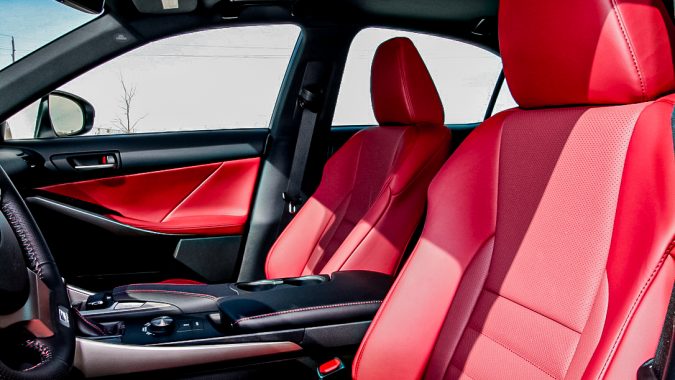