With the recent news that Hyundai will create a sub-brand of all-electric vehicles all with the Ioniq name starting in early 2021, the Korean company’s compact hatchback will become Hyundai’s OG of EVs: the model that originally proved to the company that vehicles that used only electrons could actually sell to mainstream consumers. Granted, it also launched versions of the Ioniq that used a little gas (Ioniq plug-in hybrid PHEV) and a Hybrid that can’t be plugged in at all, to provide a family of drivetrain choices similar to what its rival the Toyota Prius offers – though Toyota’s famous hybrid still hasn’t produced an electric-only version.

Ironically, this Ioniq Electric BEV tested here won’t be part of the new Ioniq brand, at least not in its current form, and it’s currently unclear whether the Ioniq BEV will be renamed or retired. What we do know is that the first of this new brand of vehicles will be called the Ioniq 5, based on the Hyundai 45 electric concept, a mid-size all-electric SUV that will be built on the E-GMP platform, the dedicated architecture for all three Ioniq models planned between now and 2024.

The Ioniq 6 will come in 2022, its sedan body style suggested by even numbers, while SUVs will be odd numbered and roughly correspond in size to their values in the Ioniq lexicon. The Ioniq 6 was previewed by Hyundai’s stunning Prophecy concept unveiled in early March, with a larger Ioniq 7 SUV slated to arrive in 2024. With that E-GMP architecture confirmed as an EV-dedicated platform, it looks like every upcoming Ioniq brand vehicle will be all-electric, perhaps suggesting that the current Ioniq’s strategy of multiple levels of electrification may soon be drawing to a close.

If that’s the case, then this or a tweaked version of this Ioniq Electric could easily become an Ioniq 2 or 4, given that Hyundai just refreshed and upgraded the 2020 Ioniq in significant ways. But maybe not, as there is still some evidence of compromises necessitated by the one-size-fits-all current platform. 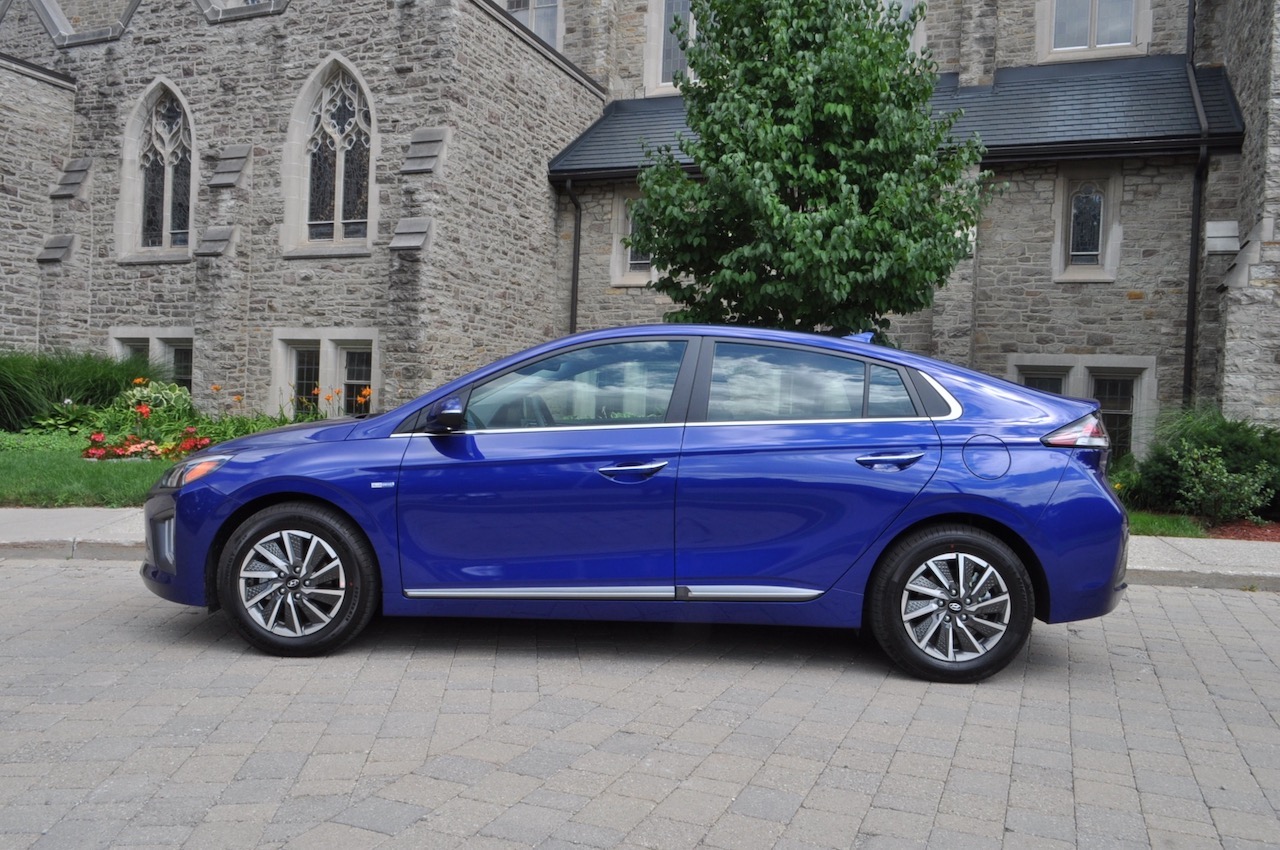 The best news is clear: Hyundai has endowed the 2020 Ioniq with a larger 38.3 kWh battery, compared to the earlier 28 kWh fuel ‘tank,’ which means significantly more driving range – there’s now 274 km compared to the 200 km available in earlier models, according to official government figures. That’s a huge improvement, clearly, but it’s also still significantly lower overall than the best-in-class 415-ish km ranges of the latest Chevrolet Bolt or the pricier Hyundai Kona EV.

There’s also a slightly quickly onboard vehicle charger, now 7.2 kW from 6.6, which allows for roughly the same charging times of about six hours on the typical EVSE if you’re pulling in to your garage on electron ‘fumes’. If you need a quicker charge, the Ioniq uses a CCS Combo charger (480V) for Level 3 charging that can offer a near zero to 80 per cent charge in 54 minutes, according to Hyundai.

This latter ability was key over my week with the Ioniq, as we took it on a 300 km weekend cottage trip with the family and lots of gear. Before leaving, I made special note of the estimated range at full charge on the Ioniq: 335 km with no climate control, and 310 km with the AC switched on, plus we’d likely be less efficient on this 90 per cent highway trip. This all meant the 150 km trip there would be smooth sailing, but for the return trip, I’d likely need at least a bit of a top up, to avoid any range anxiety over the hour and a half drive back home.

We arrived at the cottage with 167 km left showing on the dash, which proved both amazingly accurate range predictions for the Ioniq, and amazing efficiency overall. And thanks to a nearby Lake Simcoe country charger, a quick 15-minute stay added a confidence-boosting extra 72 km of range – up to a healthier 239 km reading, or roughly an 80 per cent charge. 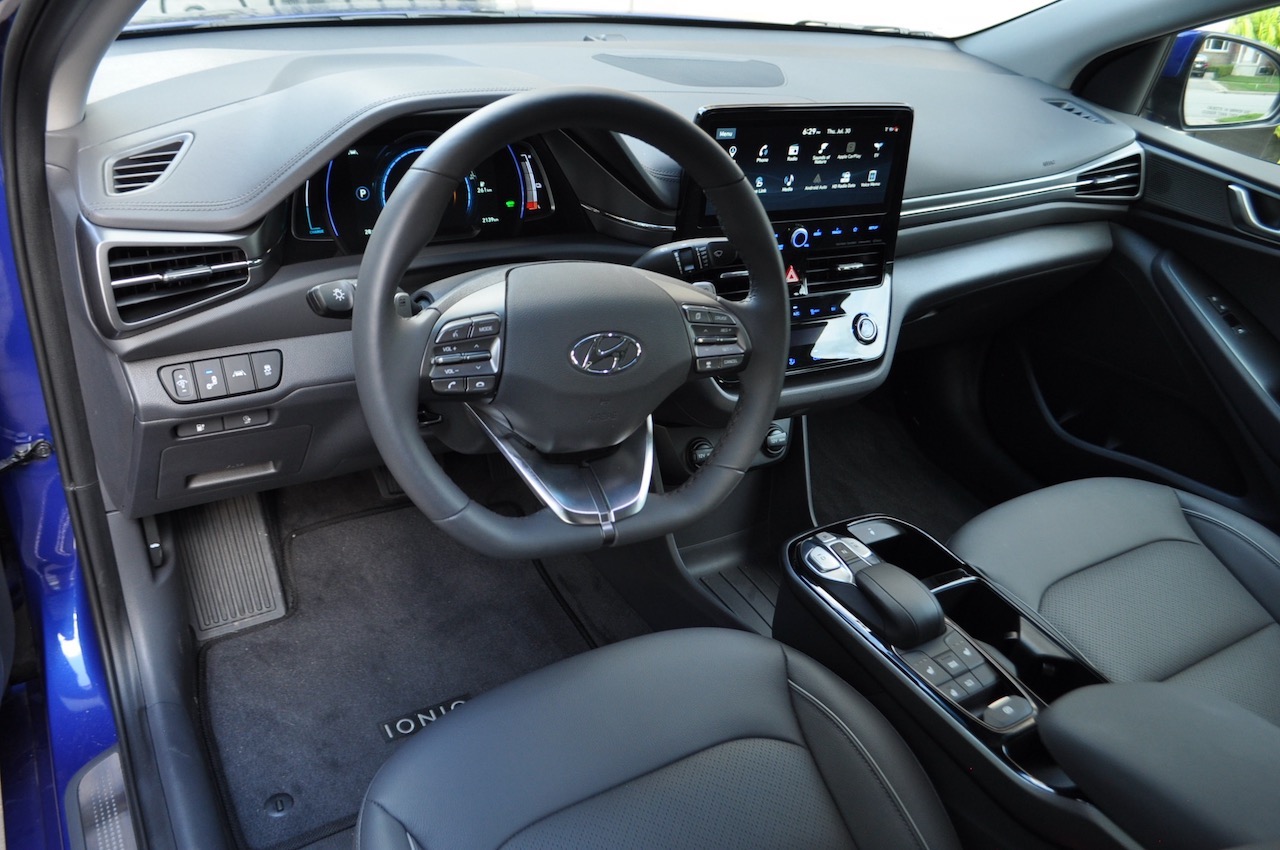 Which by the way cost $5.17, and could be done conveniently by credit card, even without the affiliated Greenlots app or RFID card. Could we have made the 150 km return trip without the extra charge, as the 167 km dash reading suggested? Perhaps, and there’s a handy navi mode that graphically maps out for the driver how far is possible on its current state of charge.

One downside to this year’s update? Hyundai didn’t upgrade the speed at which the latest Ioniq EV can quick charge – sadly, it actually downgraded that capability, from a maximum charge speed of roughly 70 kW previously, to a maximum of about 50 kW now, as reflected in its 54 minute quick charge time to 80 per cent, compared to its former 24 minute estimate on the smaller 28 kWh battery. The fastest I saw those electrons pumping into the Ioniq was at 23 kW, about half its max rate, though it stayed fairly consistently near that speed until I unplugged at just under 80 per cent.

This slower max charge rate won’t make any difference if the quick charger you’re at maxes out at 50 KW anyway, which many of the older ones do. But newer 100 kW to 350 kW quick chargers are now springing up, and the Ioniq EV is unfortunately not going to be able to take advantage of the quicker charging speeds offered at these newer L3 quick chargers – many of which charge by time, no matter how many electrons your vehicle can slurp up per minute.

That said, the Ioniq EV is one of the least expensive BEVs on the market, with a starting price of $41,499 for the base model, which includes a healthy set of standard equipment: heated steering wheel, automatic emergency braking (with pedestrian and cyclist detection), active cruise control (which can bring the Ioniq to a stop and restart automatically), seven airbags (including driver knee bag), plus Apple CarPlay/Android Auto. The $45,899 top Ultimate trim tested here adds niceties such as leather seats, heated rear seats, two-person memory seat settings, a sunroof, a wireless phone charging pad – which strangely but perhaps safely faces the phone away from the driver – plus LED lighting inside and out. 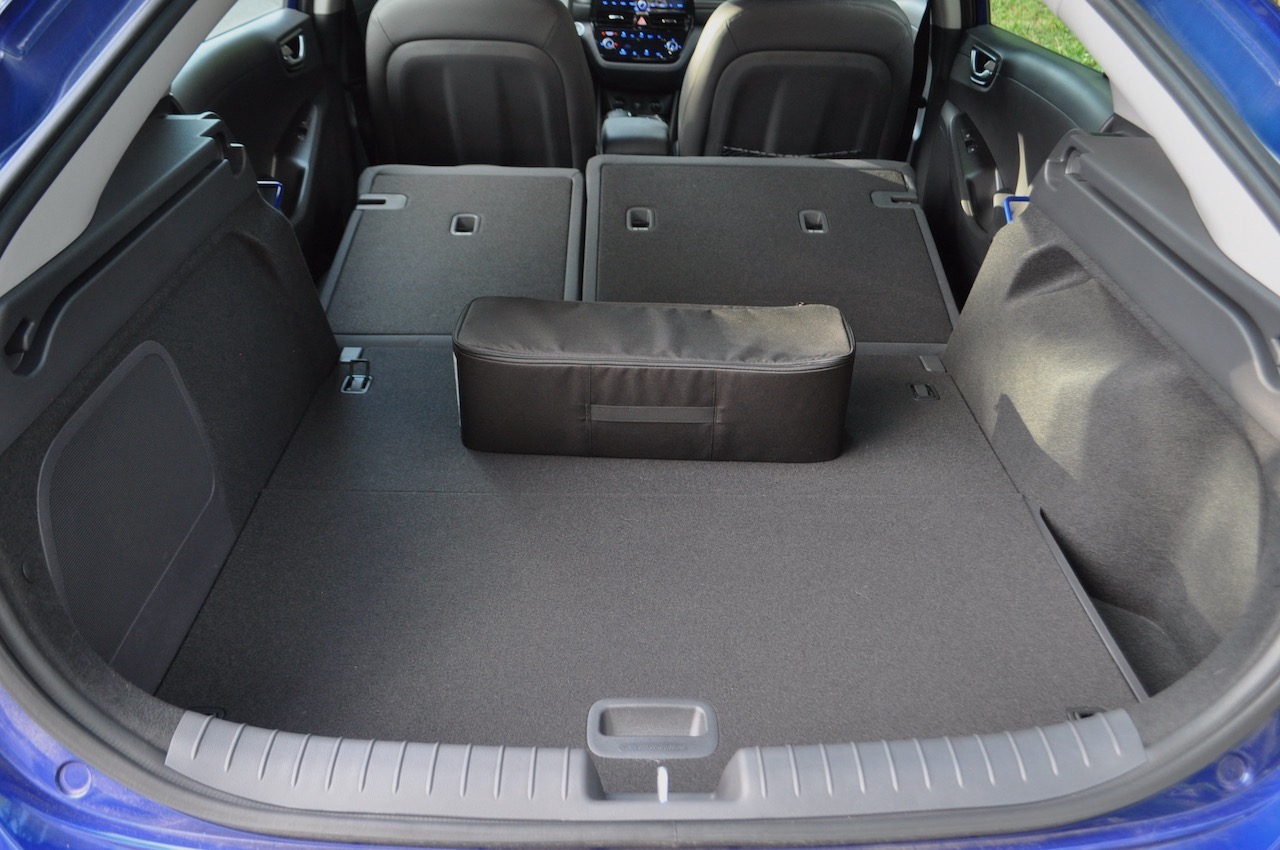 The Ioniq’s practical five-door hatchback body is lower than its Kona EV sibling, making it slightly tougher for older or less mobile folks to climb in and out of it, with a roomy cargo area marred only by seats that don’t fold flat, and a charge cable case that looks like it could be much better integrated underneath the floor. Then again, the pricier Kona is in such high demand that it must now be special ordered, according to Hyundai’s consumer site, unlike the Ioniq.

But it actually drives arguably nicer than the Kona EV, with no artificial train whistle sound at low speed to its smooth and quiet electric powertrain that constantly had me looking around for sirens in the electric Kona. It has similar regeneration paddles that provide some active driving involvement – although the flat bottom steering wheel seems to promise dynamic chops the Ioniq EV can’t provide, either in a straight line (0-100 km in 9.7 seconds, via EV-database.org) or in corners, where it’s confident but not electrifying.

Just because you can see through a glass panel on the rear hatch, doesn’t make this a modern sporty Honda CRX funster.

Sure, it would be great if there was at least some cargo room under the front hood, as on other EVs, but not available on platforms shared with gas-using versions. And it would be even better if there was not a nearly identical-looking Ioniq Hybrid on sale that starts at $25,399. For that last reason alone, as much nicer driving as the Ioniq EV is to the Hybrid, and for all its worthy 2020 improvements, Hyundai may wish to turn its Ioniq EV into a unique-looking Ioniq X sooner rather than later. 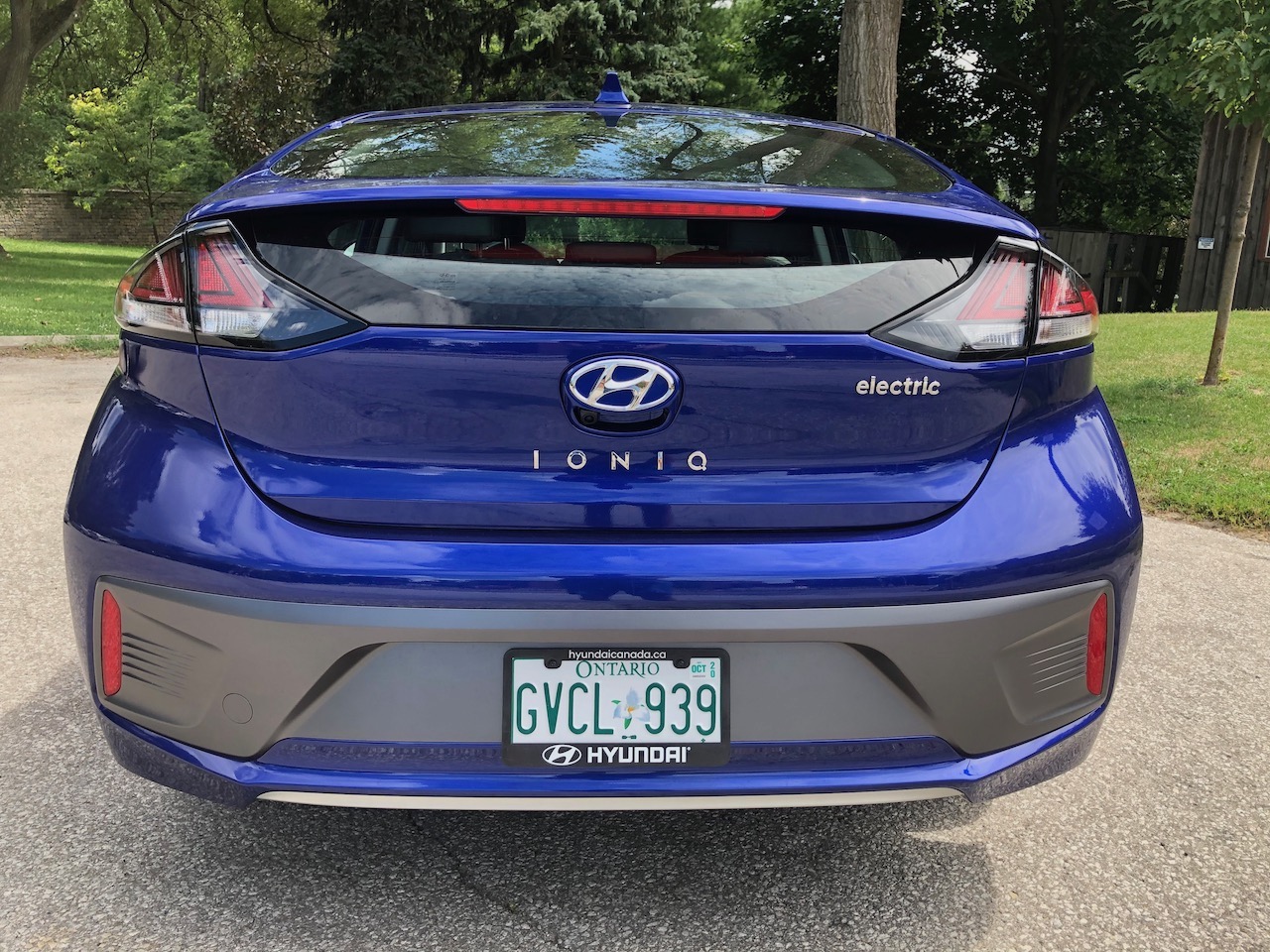 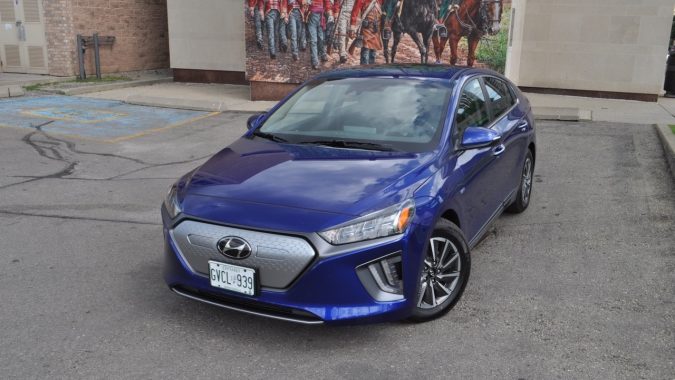 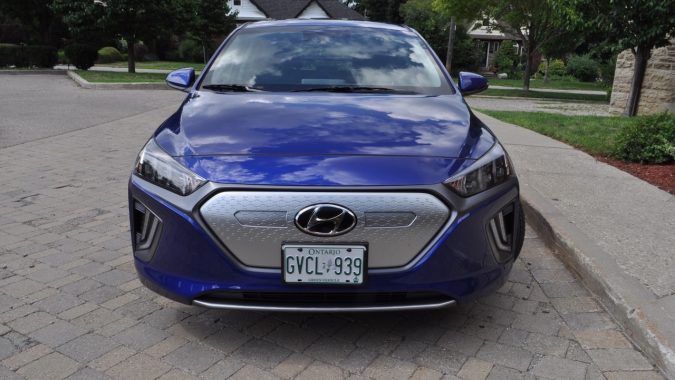 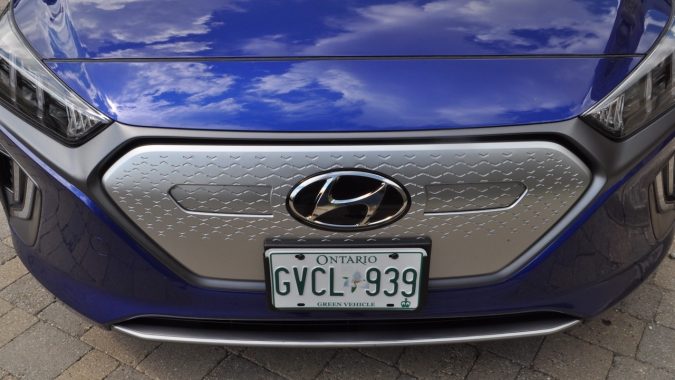 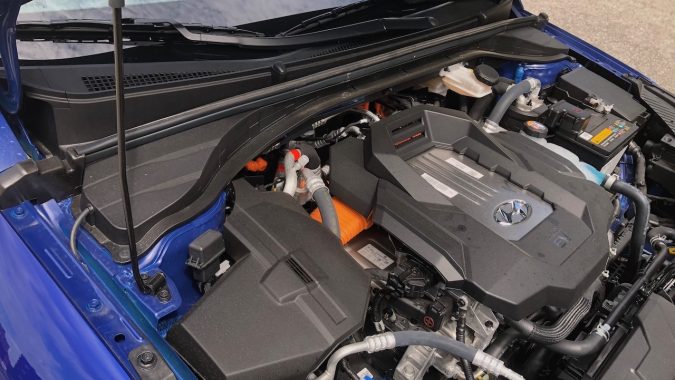 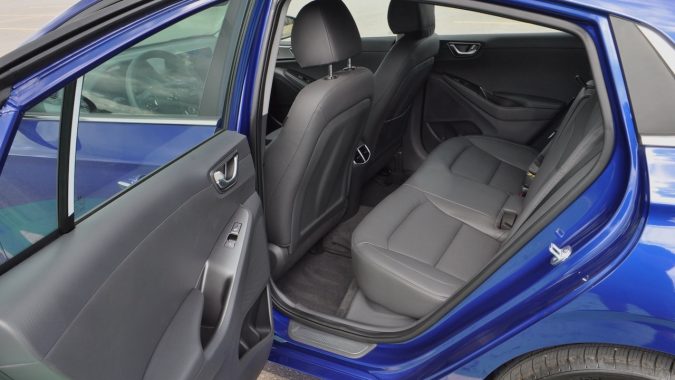 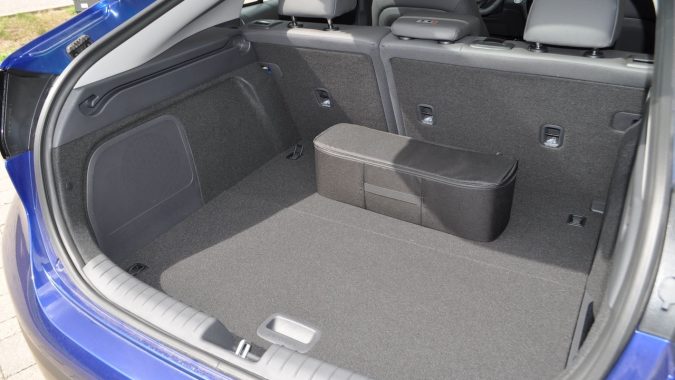 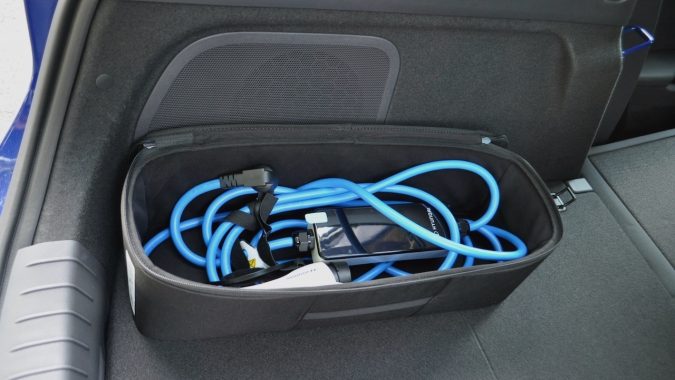 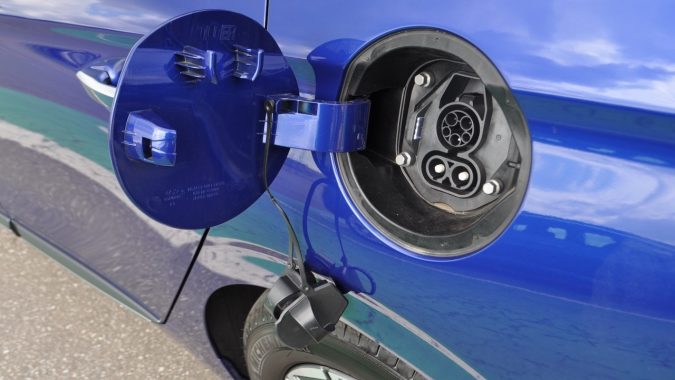 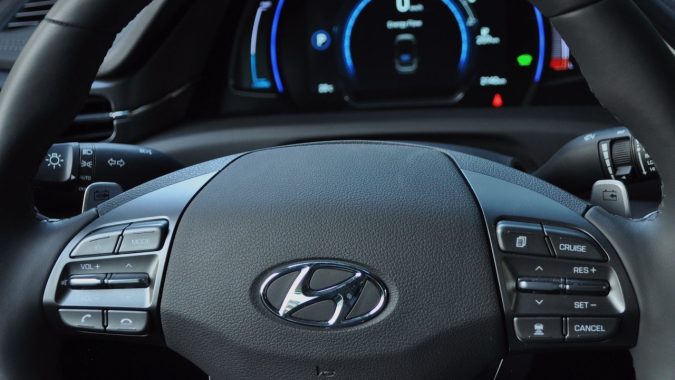 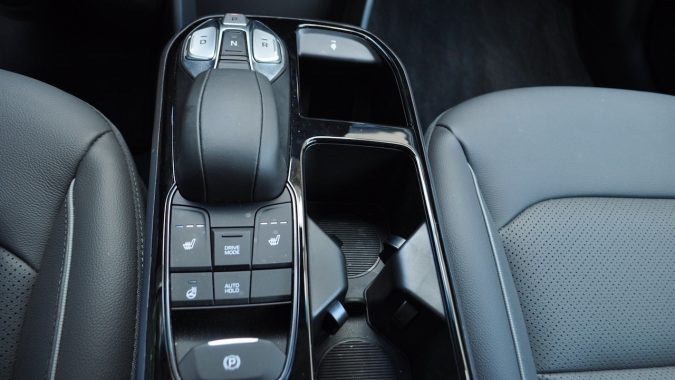 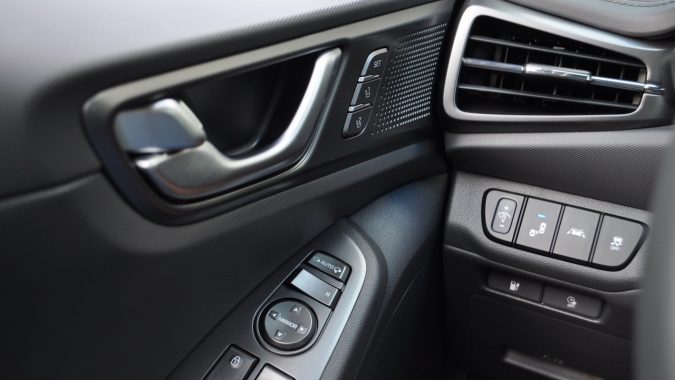 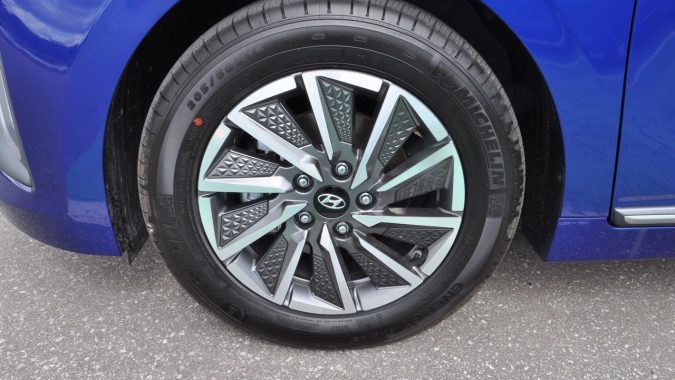 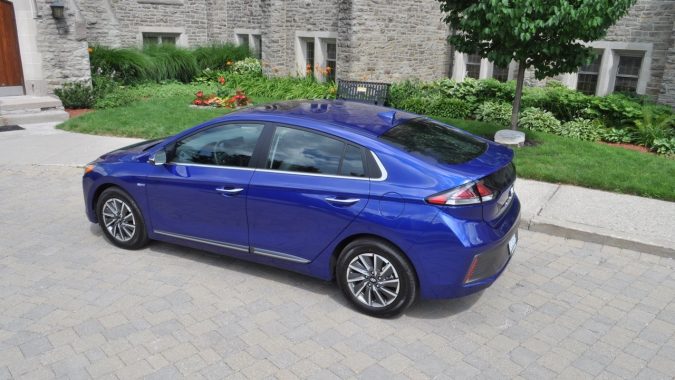