Cheerful, Not So Cheap

On paper, it’s quite difficult to find fault with the Honda Civic Touring. It’s well-equipped. It has a spectacular sound system. The ride is soft. The interior is comfortable and well trimmed. It’s fuel efficient. There’s enough space in the rear seats for even the most growth-spurt stricken pubescents and room in the trunk for two large hockey bags or all of your groceries.

At a selling price of just under $31,000, it’s a bargain compared to a similarly optioned posh BMW 3 Series or even the blue-collar Dodge Charger.

It’s like a plate of plain rice and chicken. Sustenance, sure. But not very appetizing.

Now, it’s fair enough that not everyone is interested in blistering zero to 100 times or generating g-force while going through a corner. Fuel efficiency and comfort will be a larger priority for most — which the Civic Touring excels at.

But there is a point where underperformance starts to impact the normal driving experience, even during something as simple as a morning commute. 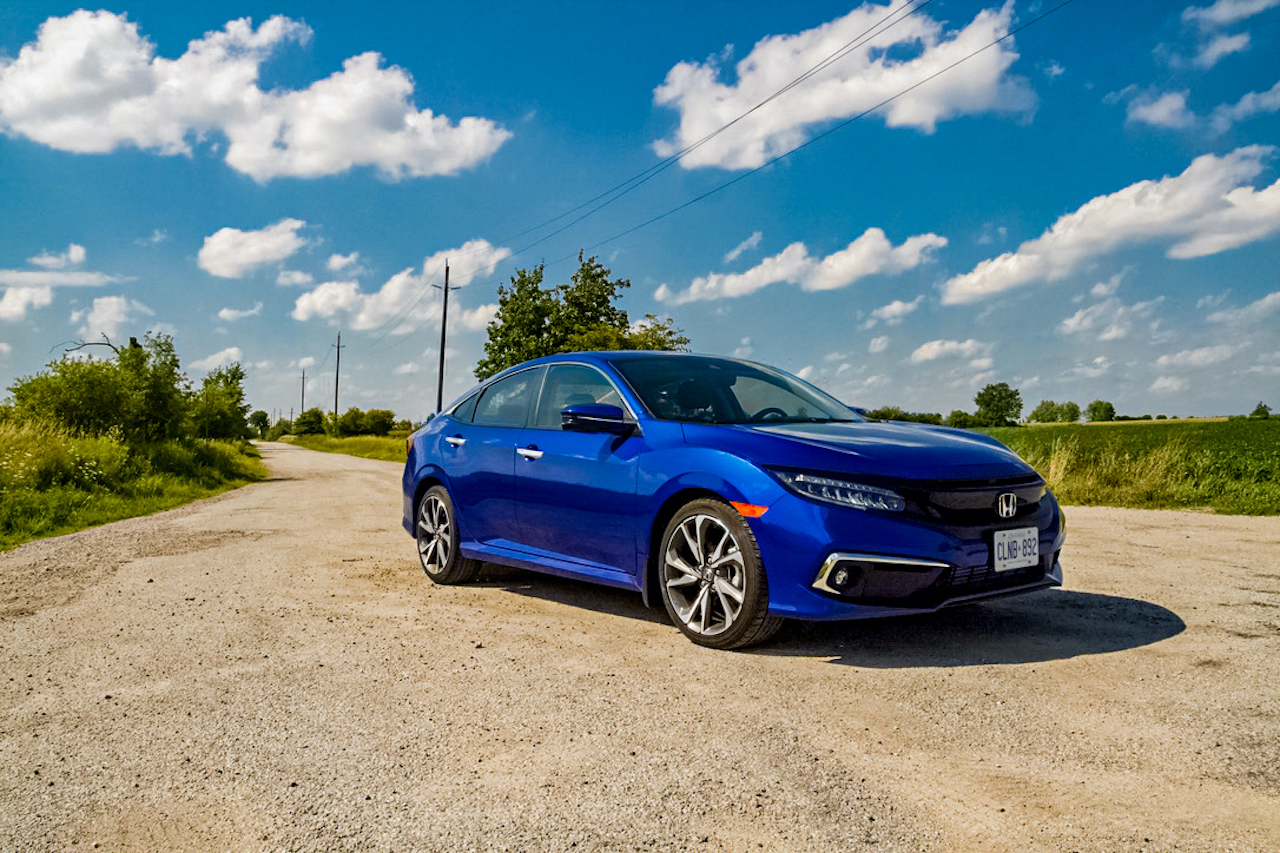 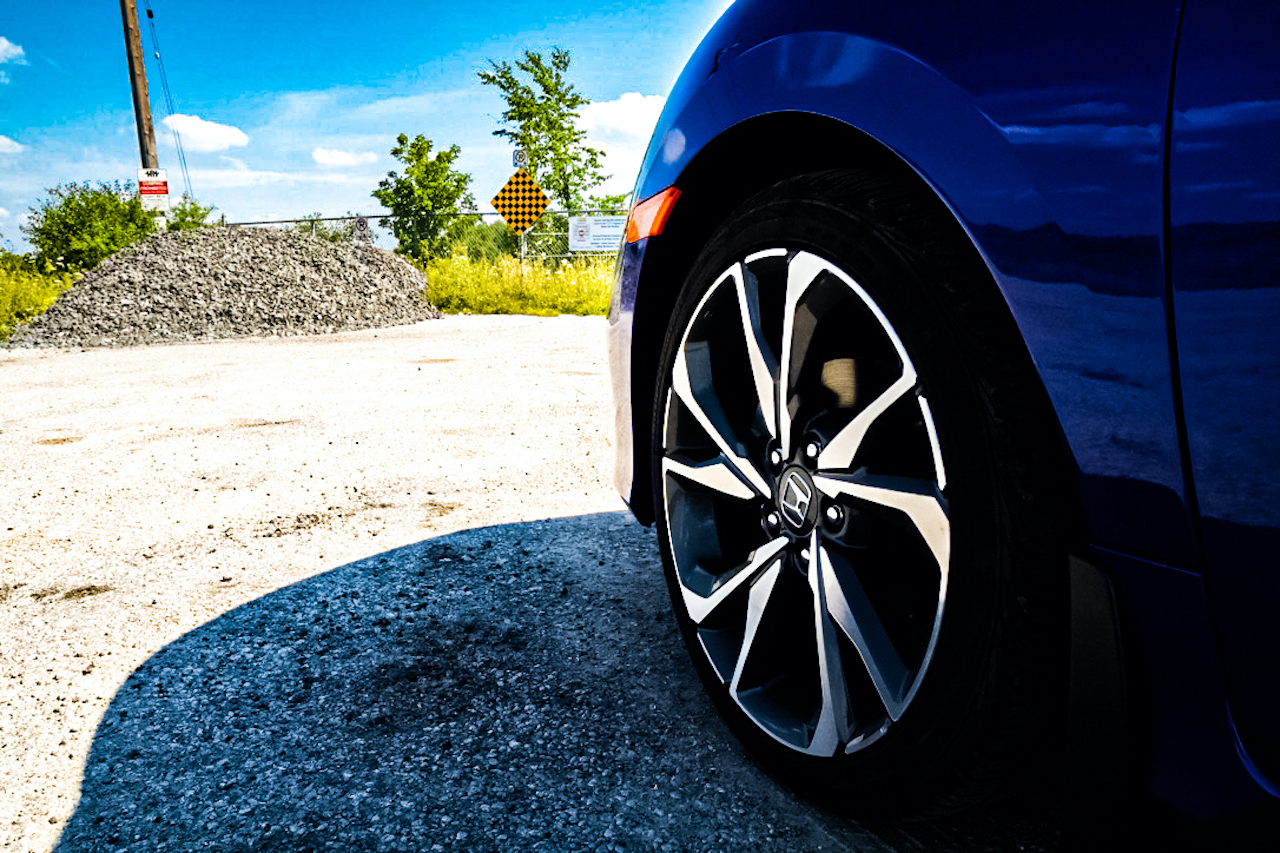 The Honda Civic Touring’s 1.5-litre engine produces a modest 174 horsepower, and that might be okay in most cars — certainly one with a manual transmission. However, the Continuously Variable Transmission (CVT) in the Touring never really keeps the engine in the power band, and because it’s turbocharged, you’re waiting an eternity for the engine to respond to your foot mashing the throttle.

Honestly, it feels like waiting for dial-up Internet. And that’s really annoying when you’re trying to bob and weave through a million transport trucks on the 401.

Yes, you can shift into “Sport Mode” and select the CVT’s gear ratios “manually” with the paddles, but that’s a bit like asking your tax accountant to give you a lap dance. They might do okay, but it’s not really their area of expertise.

Then there’s the brakes which feel like a couple of sponge cakes attached to some wood. They’re like standing on a brick. I’ve driven classic muscle cars with better brake feel. The steering is also too heavy and numb.

It didn’t have to be this way. The Toyota Camry SE is essentially the same price as the Honda Civic Touring and it couldn’t feel more different. Throttle response is sharp in the Camry — so are the brakes and the steering.

I can only theorize that Honda made the performance so poor in the Touring so as to make the upshot Si model stand out. Other than performance, the Civic Touring really is great at everything else. Not least of which is safety. 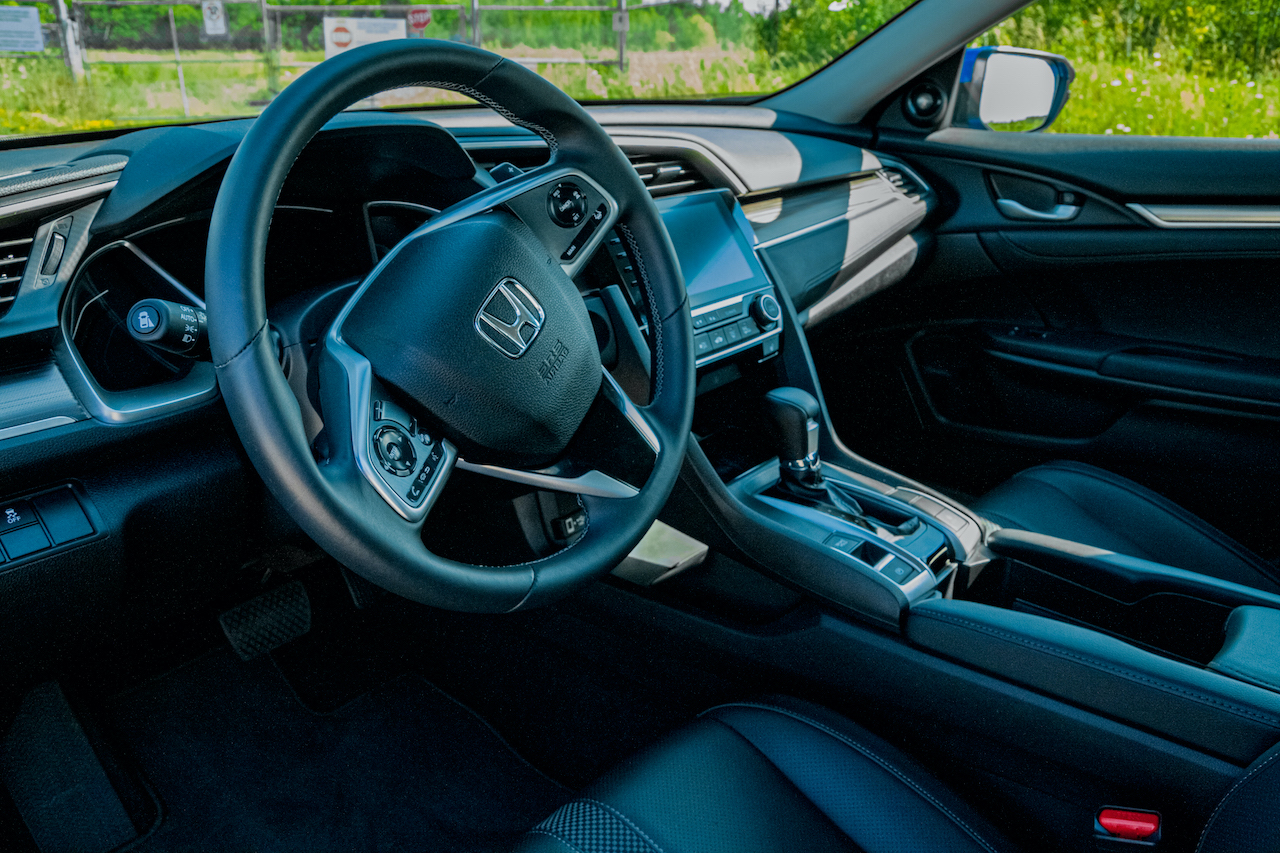 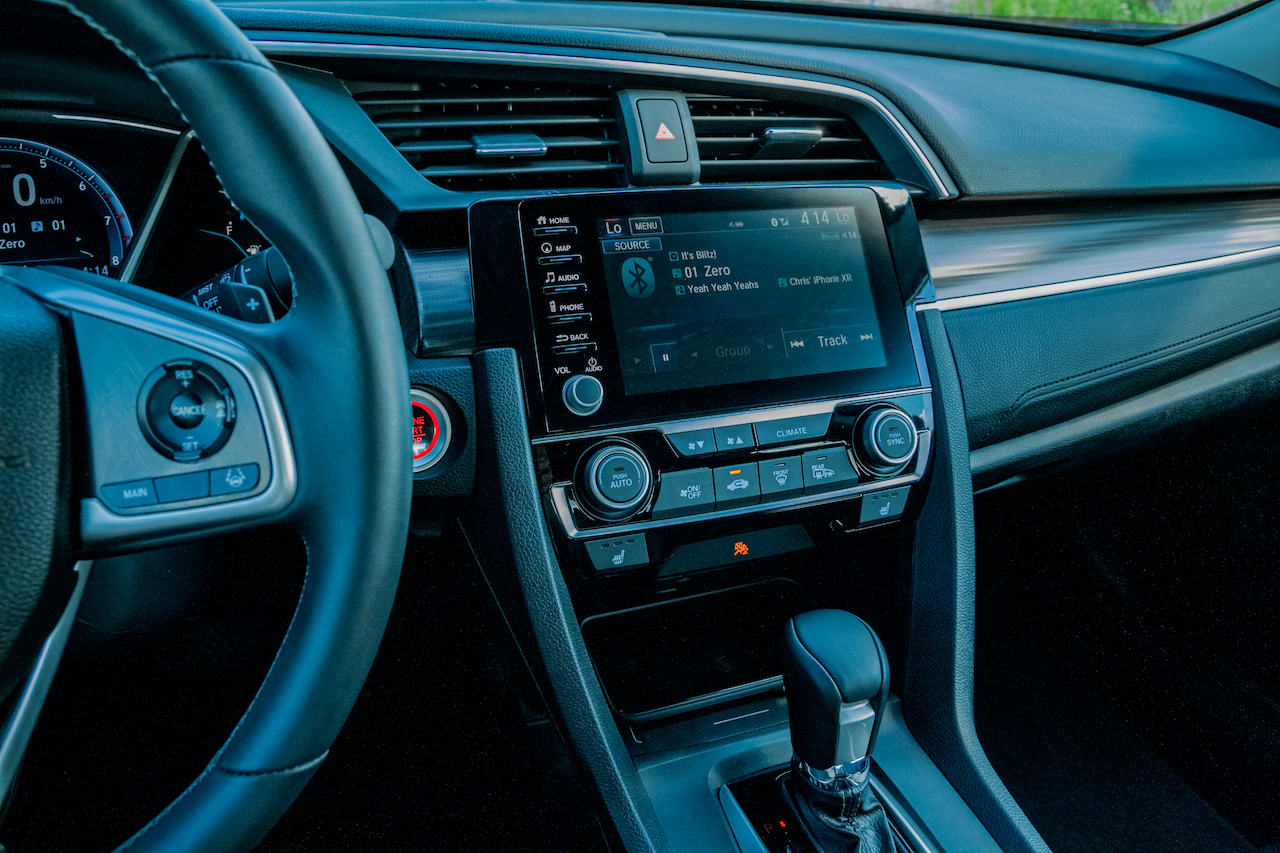 A Collision Mitigation Braking System will apply brakes to stop you from having a crash and a Forward Collision Warning will flash the word BRAKE across the dash if it thinks you’re about to be a rear passenger in the vehicle ahead of you.

A Lane Departure Warning System will also alert you when you’re (you guessed it) drifting into a neighbouring lane.

They’re handy features on the highway — particularly during a busy commute. For city driving, however, these warnings can become a little overbearing — annoying, even. Luckily, they’re simple to turn off with clearly marked buttons under the steering column, on the driver’s left-hand side.

One excellent Honda safety feature is a blind spot camera feed which appears on the centre screen when you indicate a lane change. It’s really handy for keeping an eye out for cyclists in the city.

For a $30,000 car, the quality of the interior is superb. Honda’s leather quality far outshines its competition, and the brushed steel accents provide some additional equity.

The layout is simple and recalling where controls are is a breeze. The gauges in the dash contour to the shape of the steering wheel — so your eyes never have to work to find the information you want most. I also love how the couple holders are buried down low in the centre console. It’s very handy for those of us with lanky, Grover from Sesame Street arms. 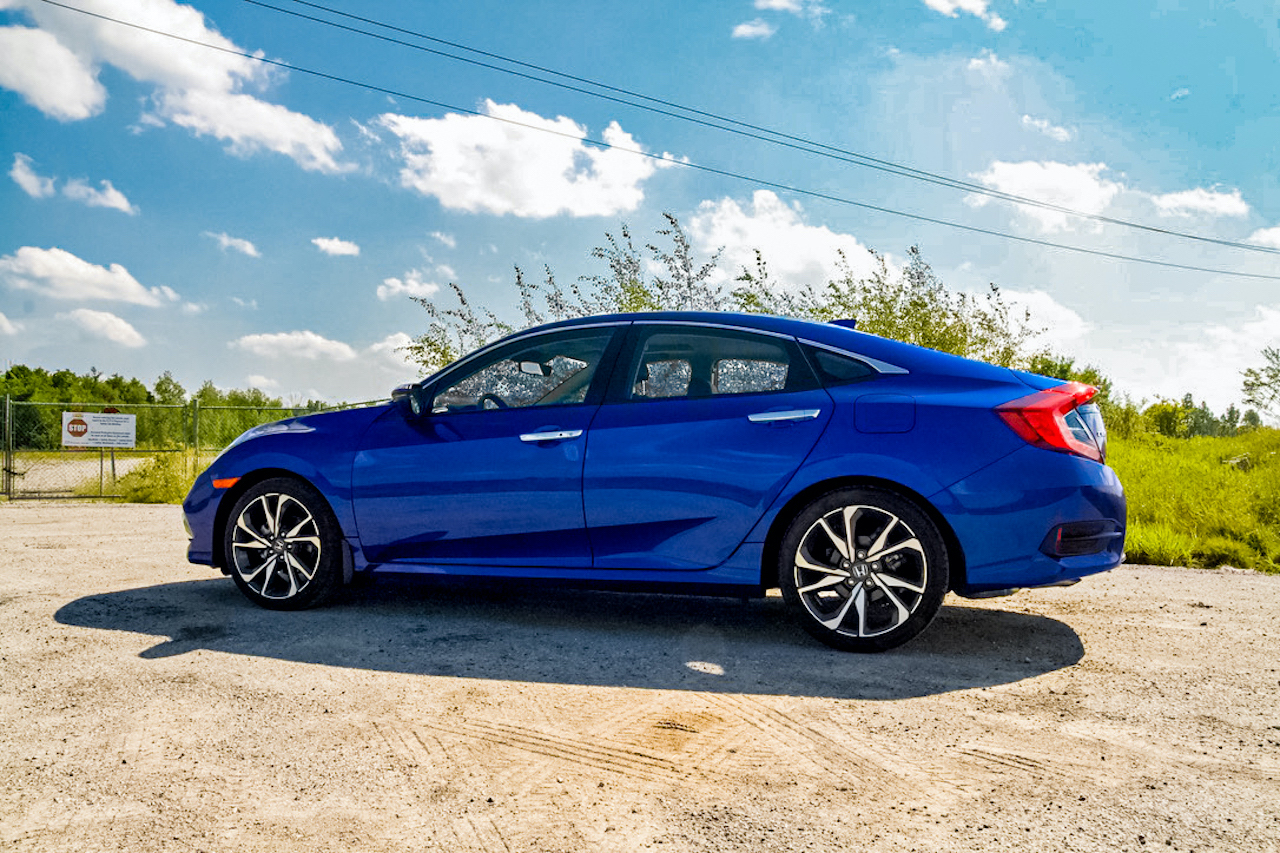 The Touring features a 452-watt premium audio system with 10 speakers including a subwoofer. It thumps pretty good. Bluetooth streaming audio, Android Auto and Apple CarPlay are all compatible.

Best of all, the Touring features a small charge pad for your phone just below the centre console and ahead of the gear selector. Simply place your phone on the pad and it will charge as you drive along – most of the time.

The Honda Civic Touring is a very well-equipped car, but because it’s so lacking in performance and joy, I wouldn’t recommend owning one. The same way I wouldn’t recommend a health-food restaurant or a film about seaweed. It might be good for you, but it’s not very exciting.

A good interior and plentiful gadgets are all well and good. But let’s face it, those are table stakes in today’s market. A car should bring a little excitement— a little joy into your life.

“Well sure, but what did you expect for $30,000? A car which costs that little can’t be practical and exciting,” you might say.

To which I would direct you to the VW Golf GTI or even Toyota Camry SE, both of which cost almost exactly the same money. When you compare the Civic Touring against those two, particularly the Golf, it no longer seems like such a bargain.

Of course, if you’re determined to have a Honda badge, there is the wicked hot Honda Civic Si, which is only about $2,000 more than the Touring model. In sedan form, the Si does all the same tricks as the Touring, plus, it will put a smile on your face.

The Si is a bottle of hot sauce —giving a much-needed kick of flavour to the Civic’s bland chicken and rice. Make no mistake about it, the Si is the Honda Civic you really want. And if you’re prepared to pay $30,000 for the Touring, you’d be as thick as a reality dating show contestant not to shell out the extra $2,000 for the Si.

And since there will be no Si for 2021, you should buy one now… just in case.