Pull a Fast One

Hands up, readers, if you’ve ever used a pickup truck to tow a trailer; One … three … seven … *mumbles* … ok, good. While there are plenty of blogs who will breathlessly report that the majority of truck owners never use their rig for hauling anything more than air, an informal straw poll of rural Canadians whose driveway contains at least one pickup revealed that a tagalong or fifth wheel has been hooked up to their proverbial bumper multiple times during ownership. Score one for the gearheads, then.

With this in mind, we hooked up some 3000lbs of trailer and Polaris side-by-side, heading for some off-road trails in the Before Times prior to all hands being advised to practice good social distancing. Connecting truck to trailer was simple, with the stout factory-installed hitch at the ready and a weatherproof electrical connector handily located to the left of the Ranger’s license plate.

A swing-and-a-miss on Ford’s midsize pickup – and a commentary on the age of this truck’s interior, a topic we’ll get to in a moment – is the inability to spec an integrated trailer brake controller from the factory. This is a critical piece of safety kit to help keep a heavy trailer in line and stable while whoa-ing things down from highway speeds. A dealer-installed unit is available and is, according to all sources, the sole component of this type to actually be approved by Ford. Why? Ranger is available with some active safety features, including automatic emergency braking, which may not play well with an off-the-shelf brake controller.

Towing a trailer can be ulcer-inducing at the best of times, let alone with the spectre of an automatic braking system functioning incorrectly percolating in the back of one’s brain. Best to take it on the chin and pay for the dealer to fit their trailer brake controller, then. The resulting installation yields a control face decidedly less integrated than the one found on Ranger’s big bro, the F-150. Fans of accessories that don’t look tacked on may be less than pleased. 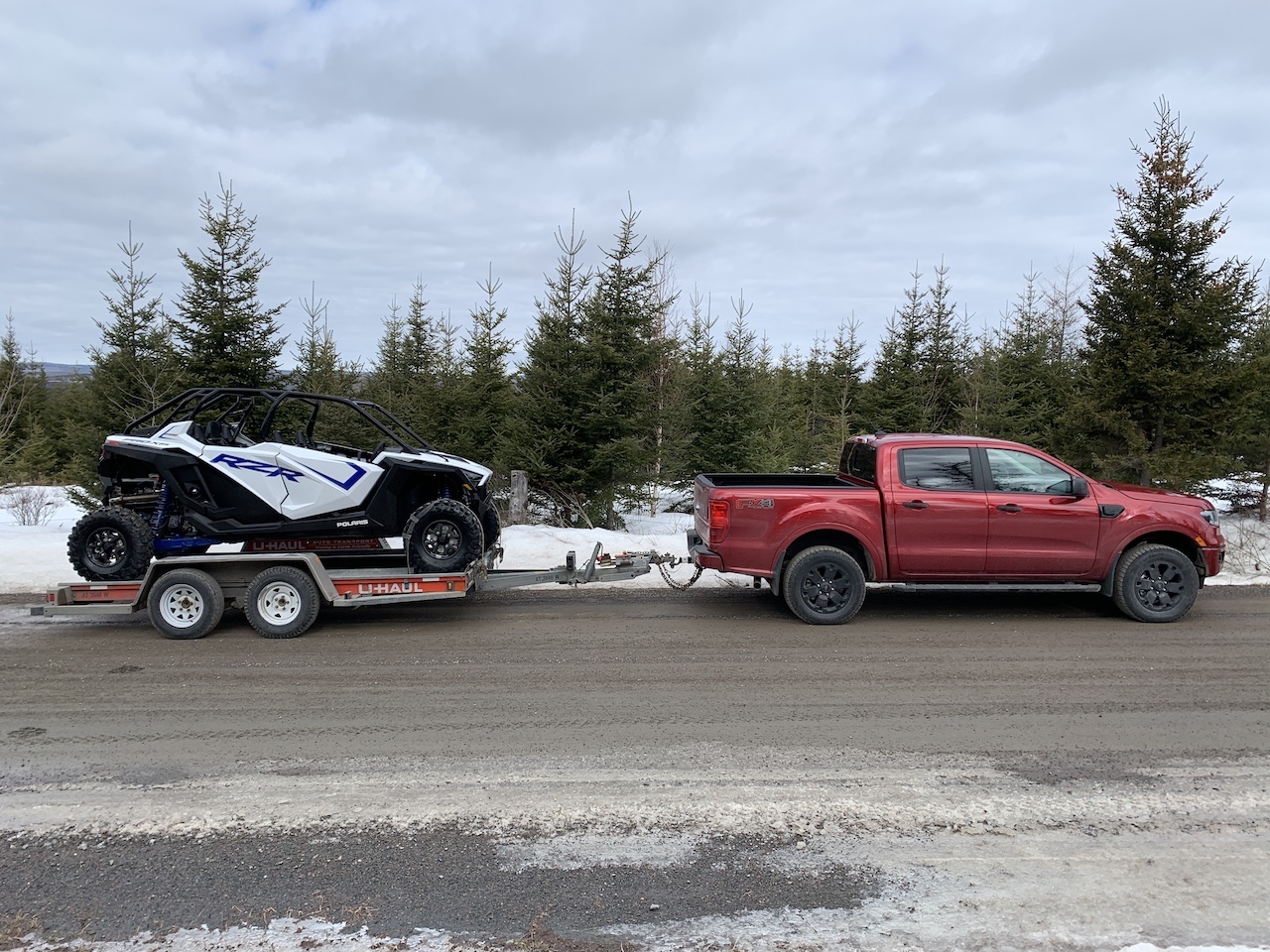 Under the hood is a 2.3L EcoBoost four cylinder, Ranger’s sole engine choice. The turbocharged mill makes 270 horsepower and a stout 310lb.-ft of torque. It’s the latter one feels and appreciates when towing a trailer. Pointing our truck and payload up a twisty dirt road angled at a roughly 10 percent grade, the Ranger had no problem scampering to East Mountain’s summit in search of good off-road trails. The throttle was easy to modulate, permitting the truck to avoid the clean-and-jerk movements that accompany some towing experiences (that’s a reference to weightlifting; get yer mind outta the gutter). Its ten-speed automatic went about its duties invisibly.

Performing acceleration tests from a dead stop in a pickup truck laden with 3000lbs of trailer is like trying to run the 100 metre race in a pair of rubber boots full of tadpoles. Rather, we’ll tell you that this engine and transmission combination is more than capable of permitting ample acceleration – towing or not – to zip past sedentary Corollas and blow off two-lane dawdlers. It can literally pull a fast one.

The midsize Ford Ranger has been with us in its current form for all of a single model year, with the first copies rolling off a North American assembly line in October 2018. As a unit, it is derived from the so-called T6 Ranger which has been on sale in other markets since 2011. This will help explain some details which seem to harken back to the last decade because, well, they do. 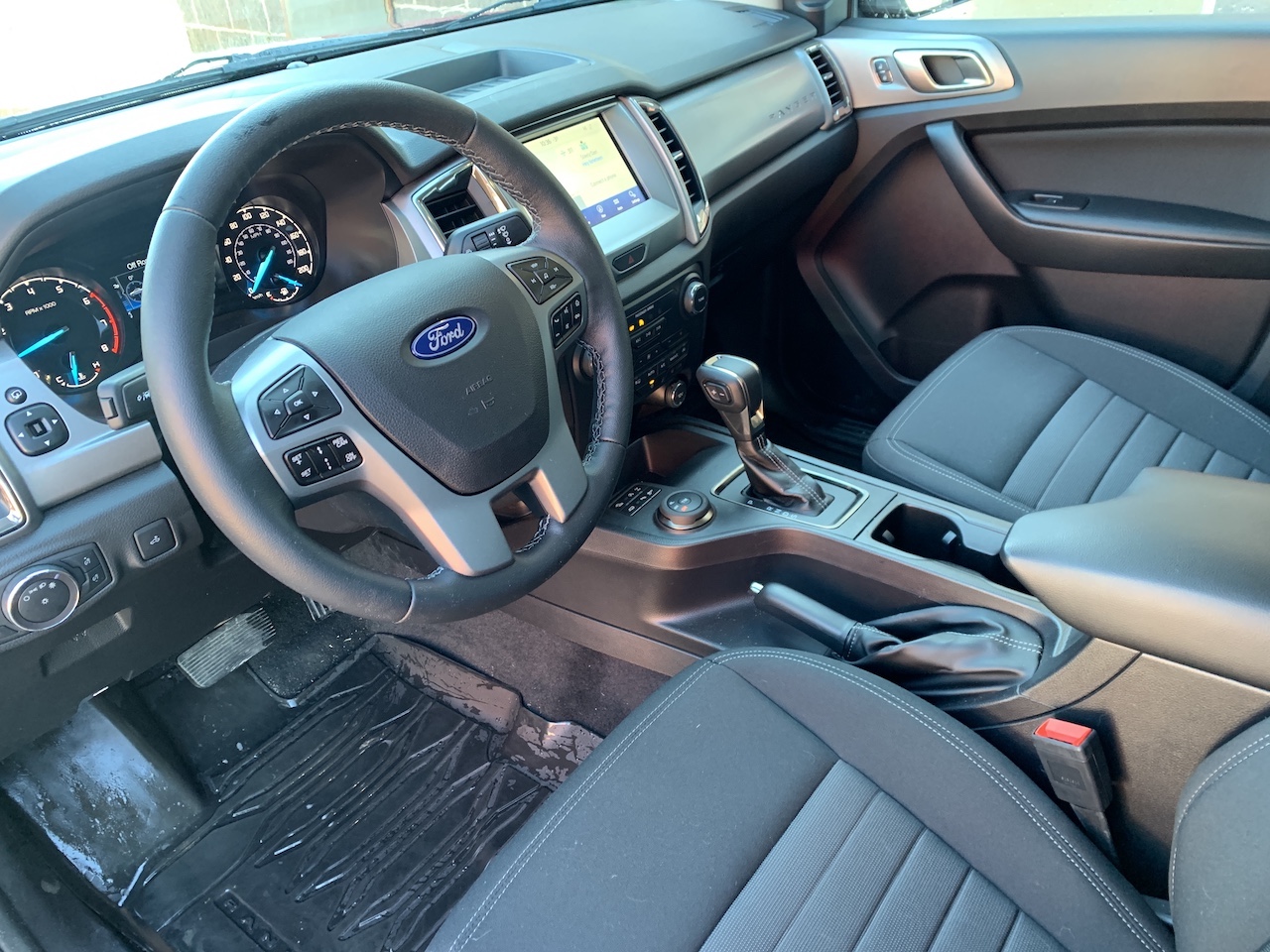 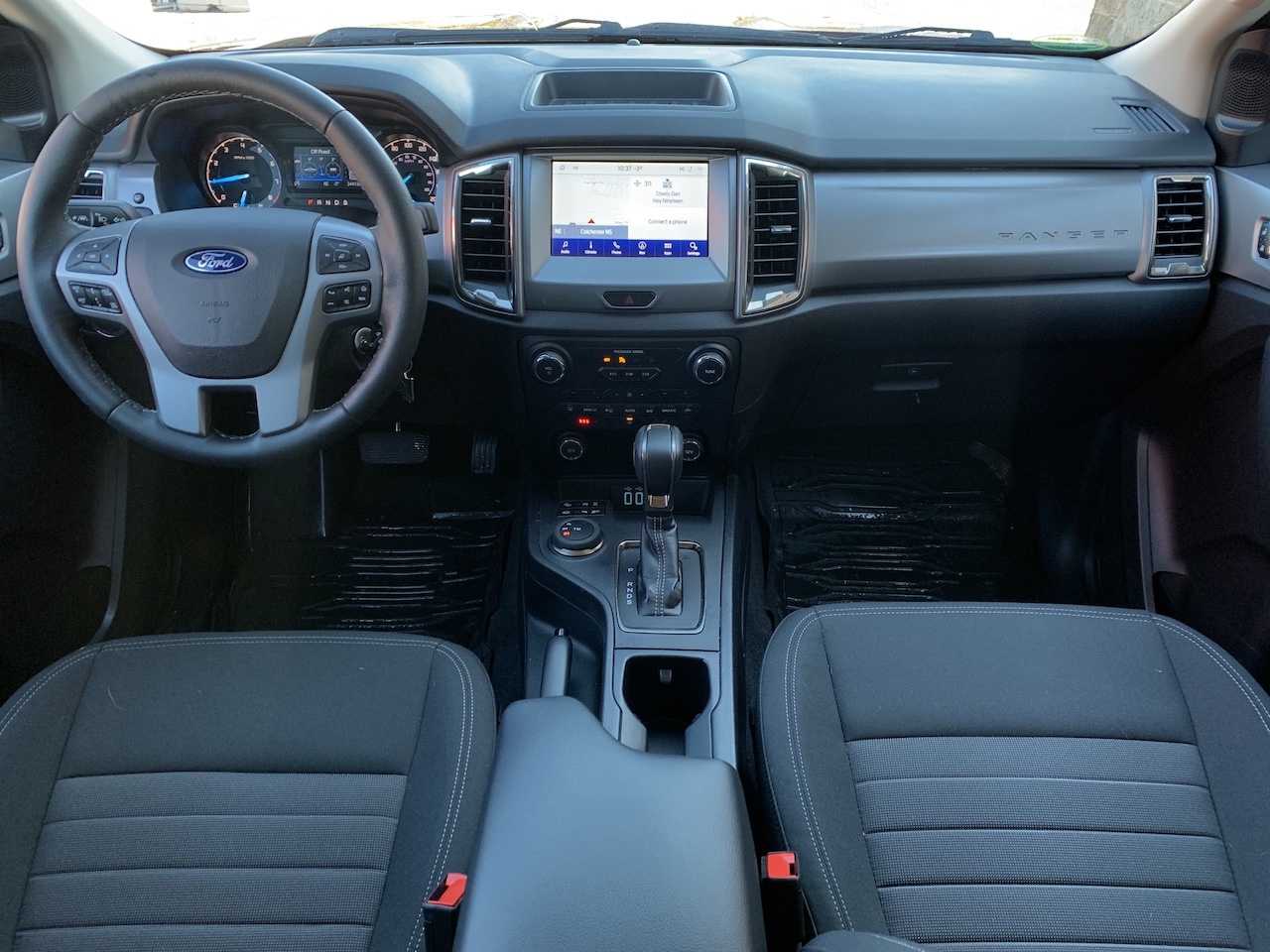 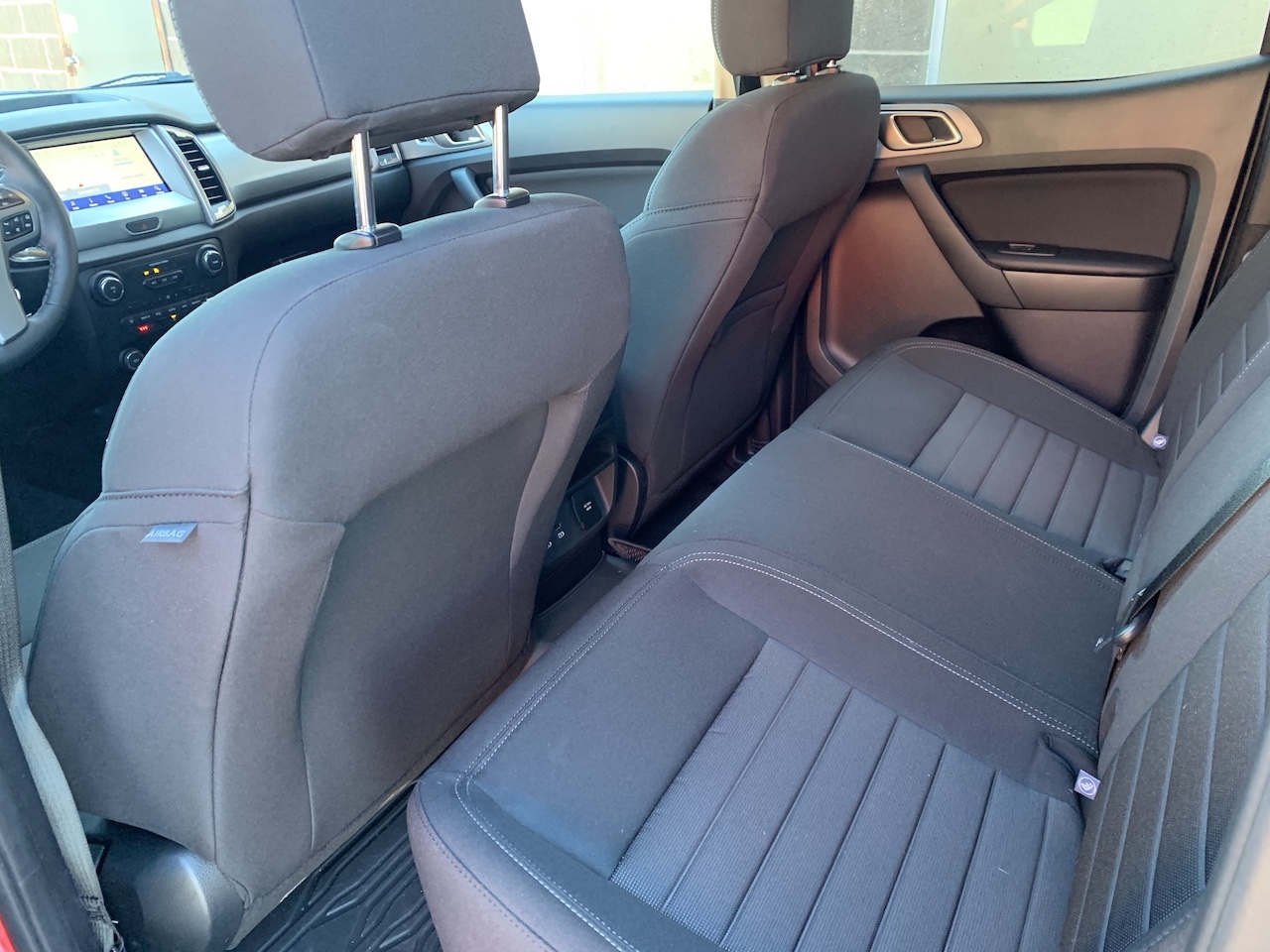 Chief amongst such carping is the design of Ranger’s interior. That its competitors are also saddled with aged cabin styling is fortunate, as it wouldn’t exactly take a quantum leap for another manufacturer to outdo Ford’s effort in this area. In a world where full size trucks are laden with large luminescent gauges and infotainment screens the size of home movie theatres, the environment on offer in Ranger looks a bit Spartan.

That aforementioned lack of allocated dash space for an integrated electronic trailer brake controller also belies the truck’s age. However, its materials are inoffensive and the whole atmosphere has the vibe of shaking hands with an old friend. Other kvetching is directed at a set of headlights offering all the forward brightness of fireflies in jam jars, plus an undamped tailgate that slams to earth with a crudeness not seen since Caligula ruled Rome.

This brings us to the Ranger’s greatest challenge: price. As equipped, the truck you see on these digital pages stickered in excess of $50,000. That’s a tough pill to swallow, though it is one dispensed by all midsize trucks these days. An argument can be made that Ranger’s main competition sits right across the showroom in the form of a well-equipped F-150. 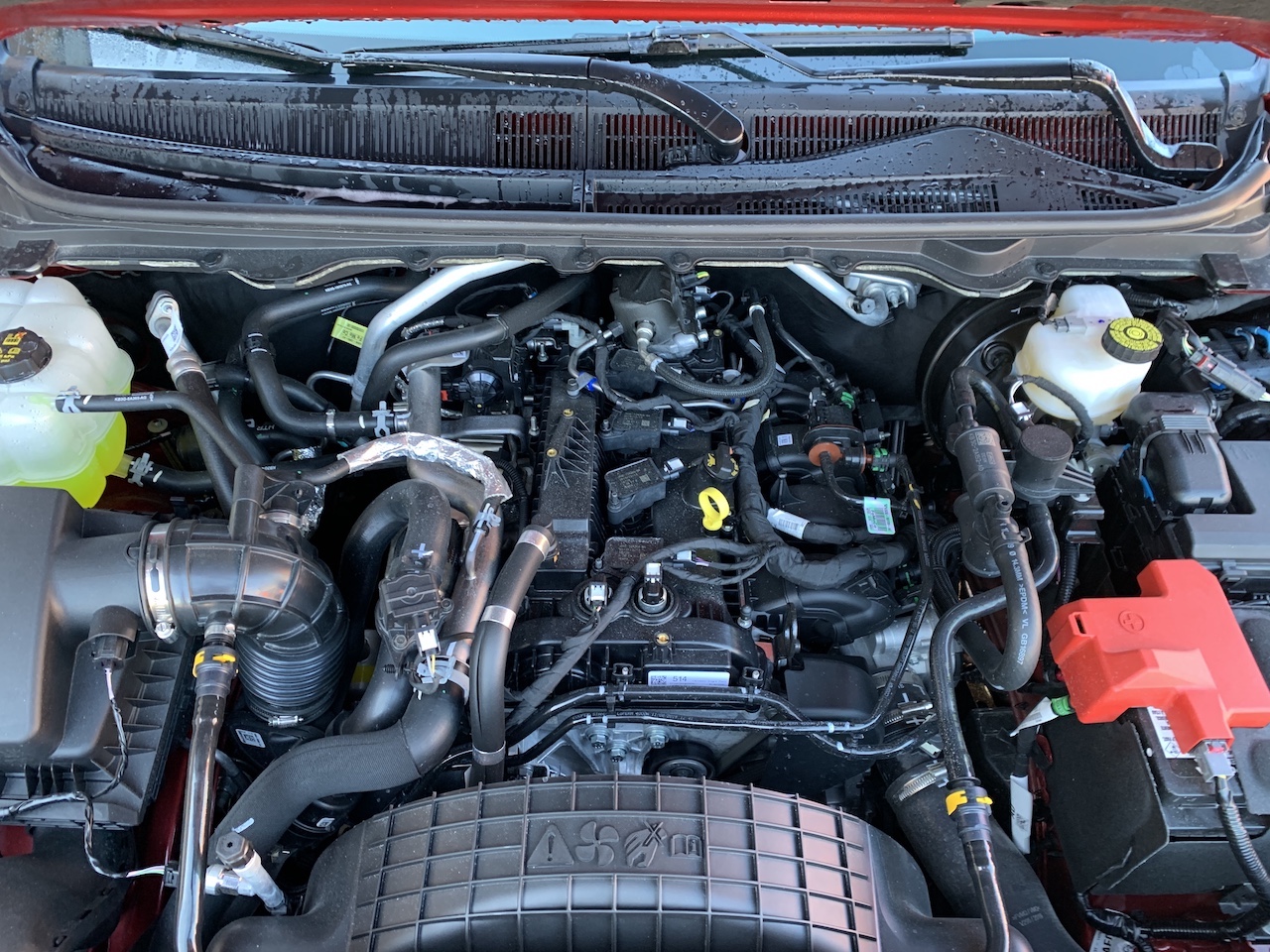 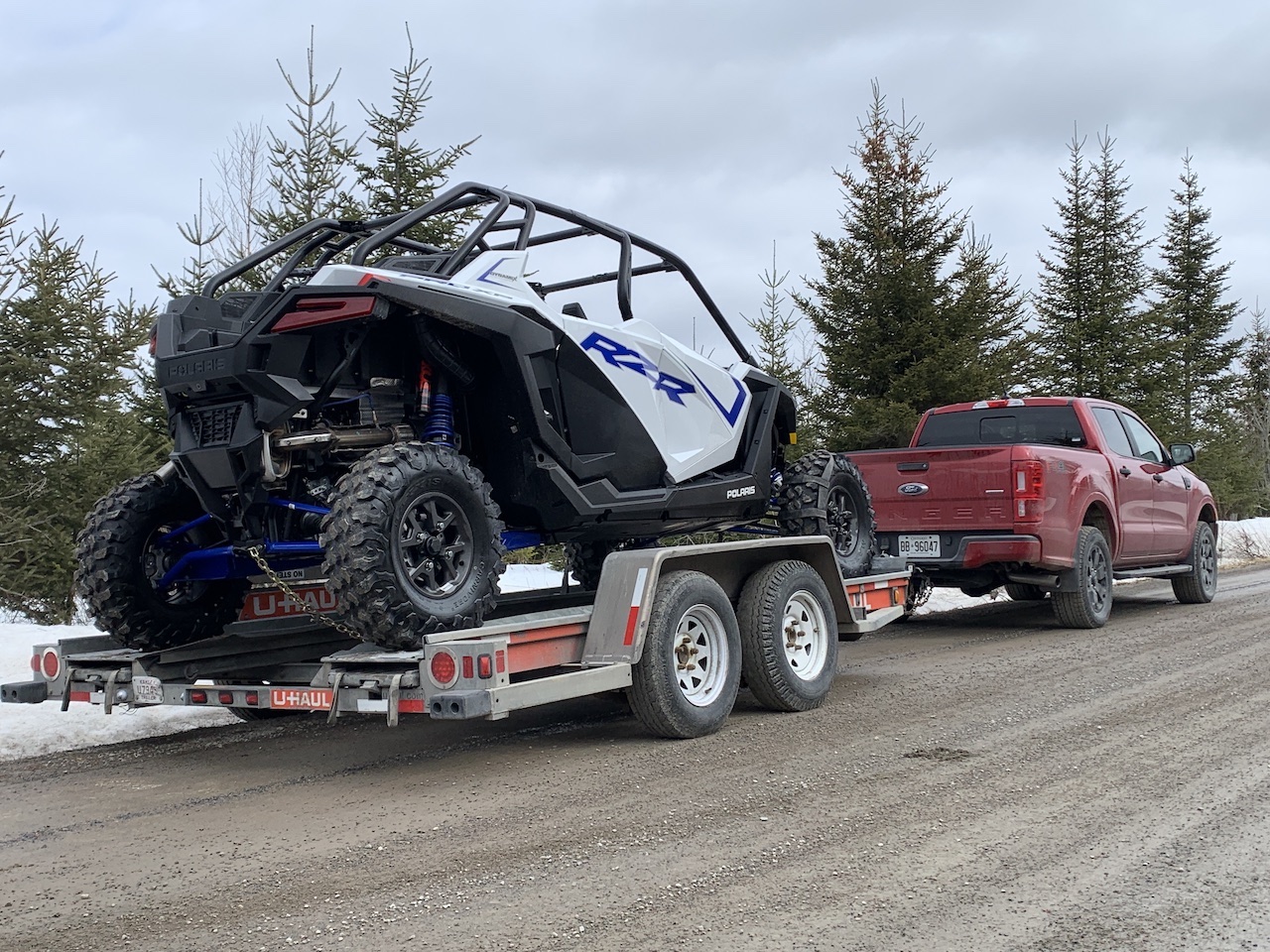 In fact, a similarly equipped F-150 SuperCrew XLT 4×4, equipped with the FX4 package and a tasty 2.7L EcoBoost engine making 325 ponies and 400lb.-ft of twist but absent option package 302A which brings kit like remote start and a sliding rear window, stickers for just $180 more than our test Ranger. In a world where a lot of people automatically choose the biggest possible option given a certain amount of money, one can understand why they’d select the F-150 even if the smaller Ranger would suit all of their needs and save a bit of fuel in the process (about 1.0L/100km per nrCan, if you’re wondering).

As our casual survey of rural Canadians showed, chances are pretty good you’ll be towing something no matter which of the Blue Oval pickups you choose. Our recommendation? Go for the amount of truck you need … even if it isn’t the biggest one in the showroom. 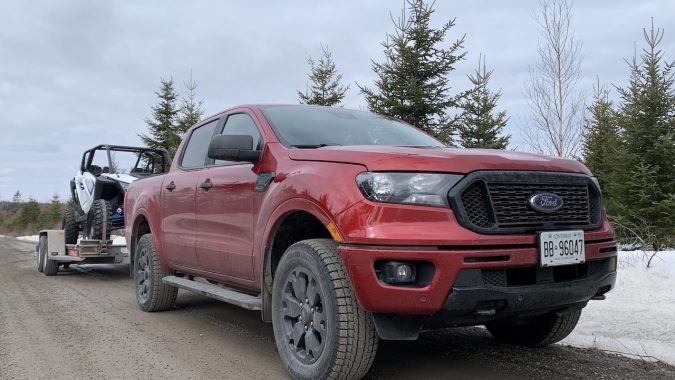 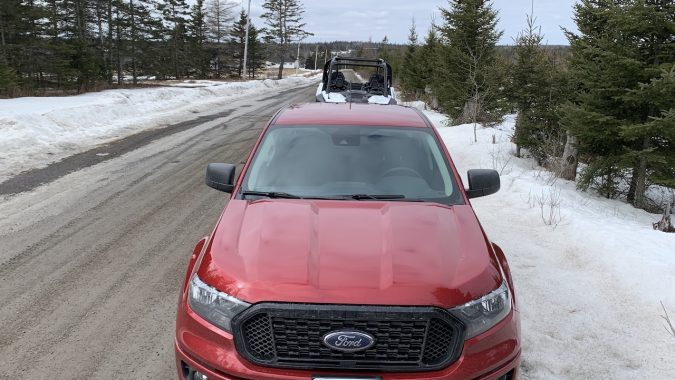 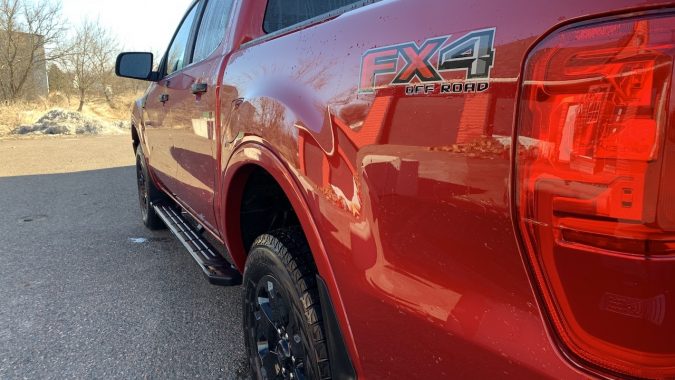 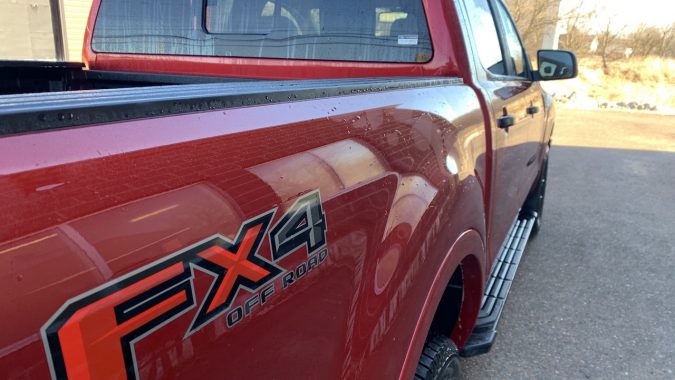 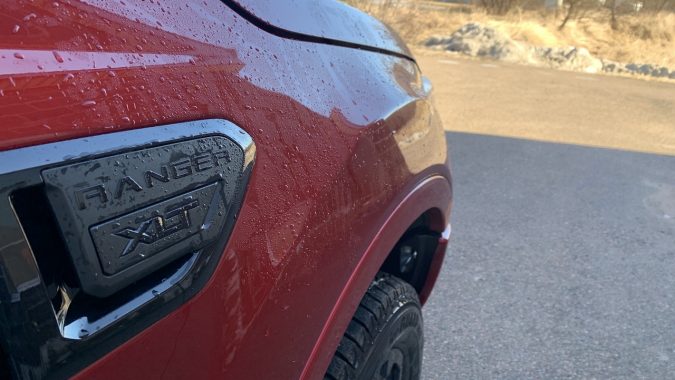 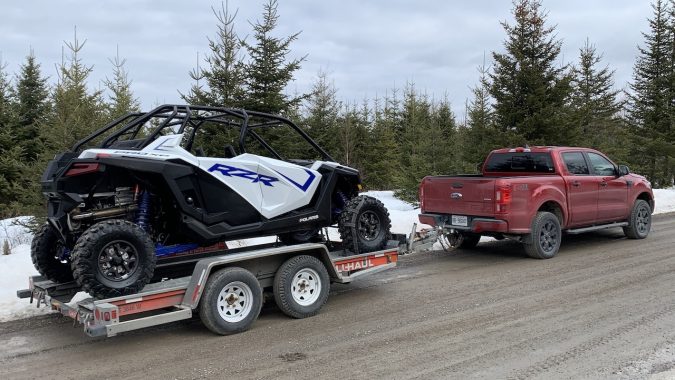