Well, it’s hard to miss, that’s for sure.

While the 13th-generation of the Ford F-150 debuted amid a huge amount of hullabaloo and fanfare because it is one of the bestselling vehicles of all time the world over and it arrived for the 2015 model year made up of aluminum, it’s easy to forget that the F-150 has an SUV sibling in the Expedition. When that truck’s latest generation arrived for the 2018 model year, it wasn’t nearly as celebrated even though it, too, was crafted mainly of aluminum.

That’s a lot of change for a vehicle. So how has it all played out? Should we have been paying – or should we now pay – more attention to the Expedition?

Well, it’s hard to miss, that’s for sure. Especially in the King Ranch form seen here, so named for a Rhode Island-sized cattle ranch in Texas. It also means that my tester (base MSRP: $76,750) sits one rung down on the Expedition luxury ladder from the Platinum (base MSRP: $78,400). It looks the part, finished in “Blue” paint and with silver brightwork adoring the grille, with very nice 22-inch wheels and the base of the side windows and on the “King Ranch” badging throughout. Those badges started out as one of my favorite details, appearing nicely carved from a luxurious block of platinum. A closer look, though, revealed that one was starting to lift off its panel. Not great.

Inside, it begins and ends with the gorgeous two-tone interior that’s the only choice for the King Ranch. As far as I’m concerned, there’s no point in any other colour choice because this is so good. There are many that won’t feel that way about the interior colour, though, and not having any other choice could be a problem for some potential King Ranchers. 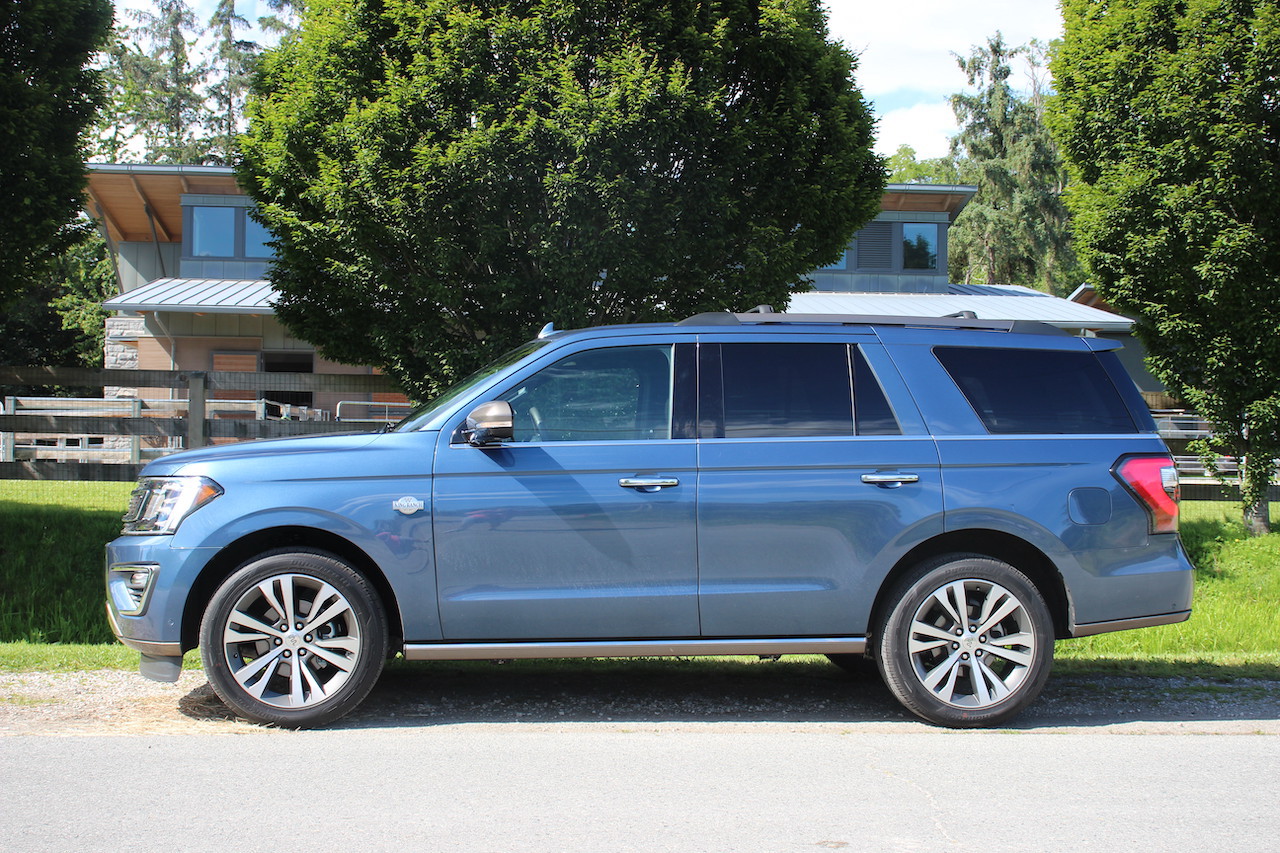 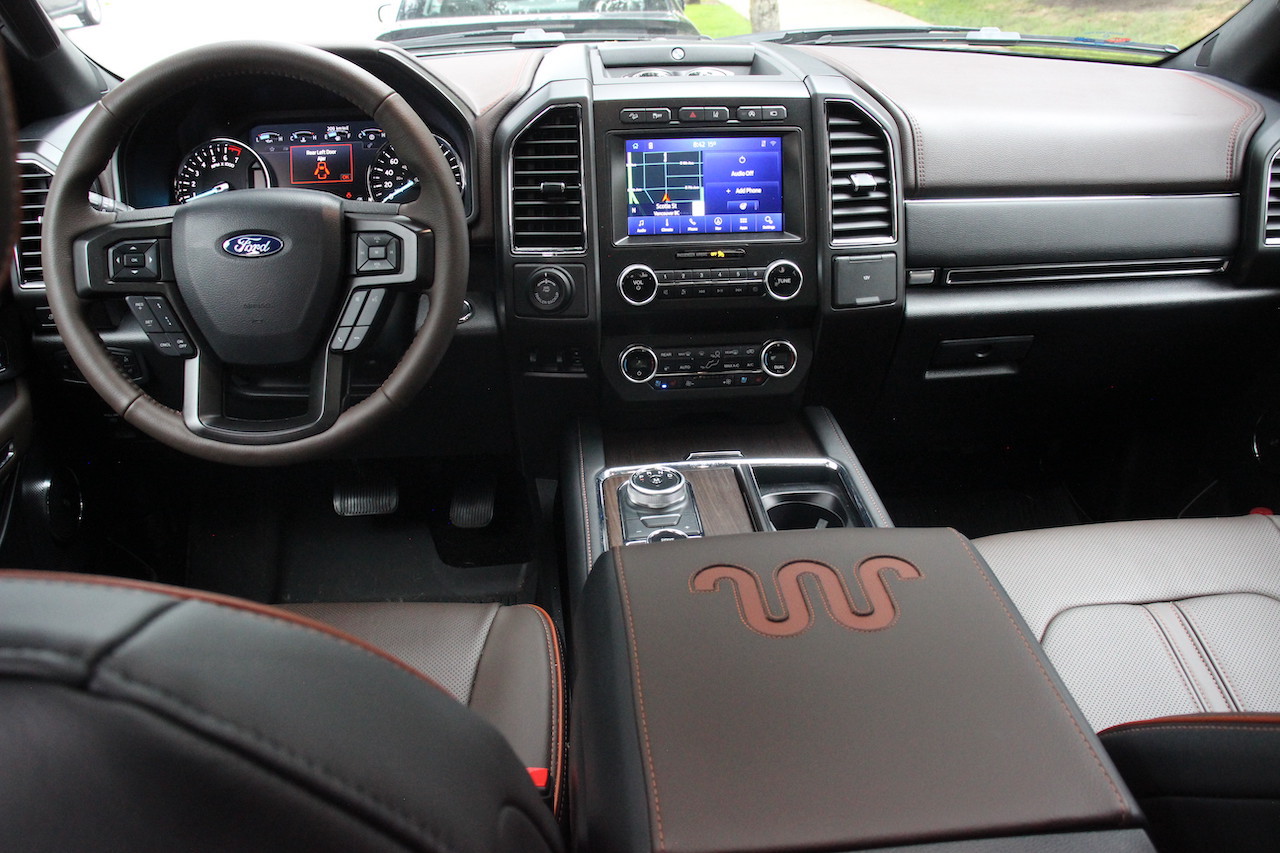 The feature list, meanwhile, is befitting of the trim: tri-zone climate control, heated and cooled front seats, heated second-row seats, heated steering wheel – that can only be activated via the infotainment screen, which can be difficult with gloves on – six USB ports, wireless charging, Apple CarPlay and Android Auto. Also included is B&O audio, available inflatable seat belts, digital gauge cluster, pro trailer back-up assist and a 110V outlet. I do miss having a foot-activated liftgate, though. For a vehicle whose base MSRP is knocking on the door of 80 grand you should be able to get one, as the Platinum does.

Inside, headroom is enough that any rancher in a cowboy hat shouldn’t have a problem, and the legroom is generous across all three rows and getting back to the third is easy for the kids. The King Ranch is available only with second-row captain’s chairs meaning a nice, wide channel between them through which one can make their way to the back row. There is no bench seat option but I sincerely doubt many Expedition owners will be hauling seven passengers on the regular anyway. 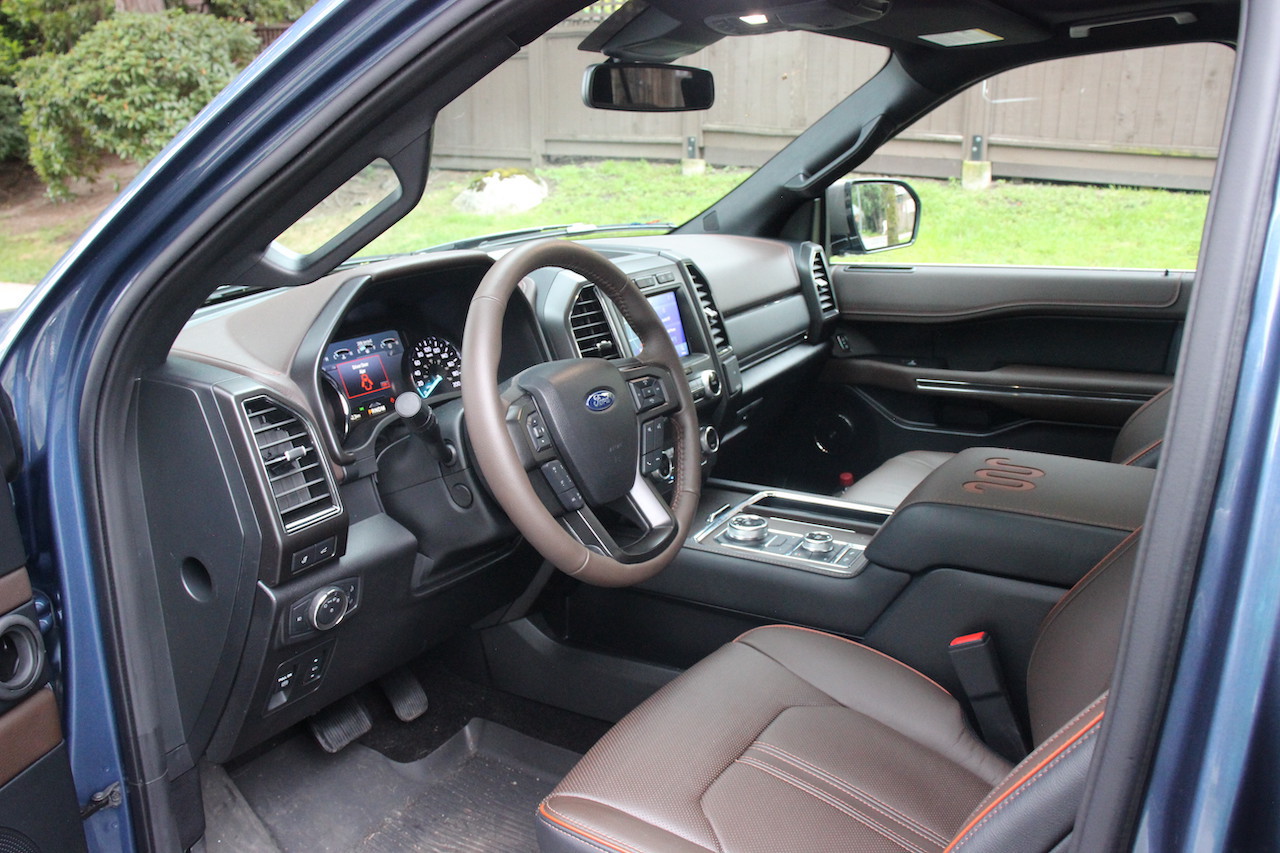 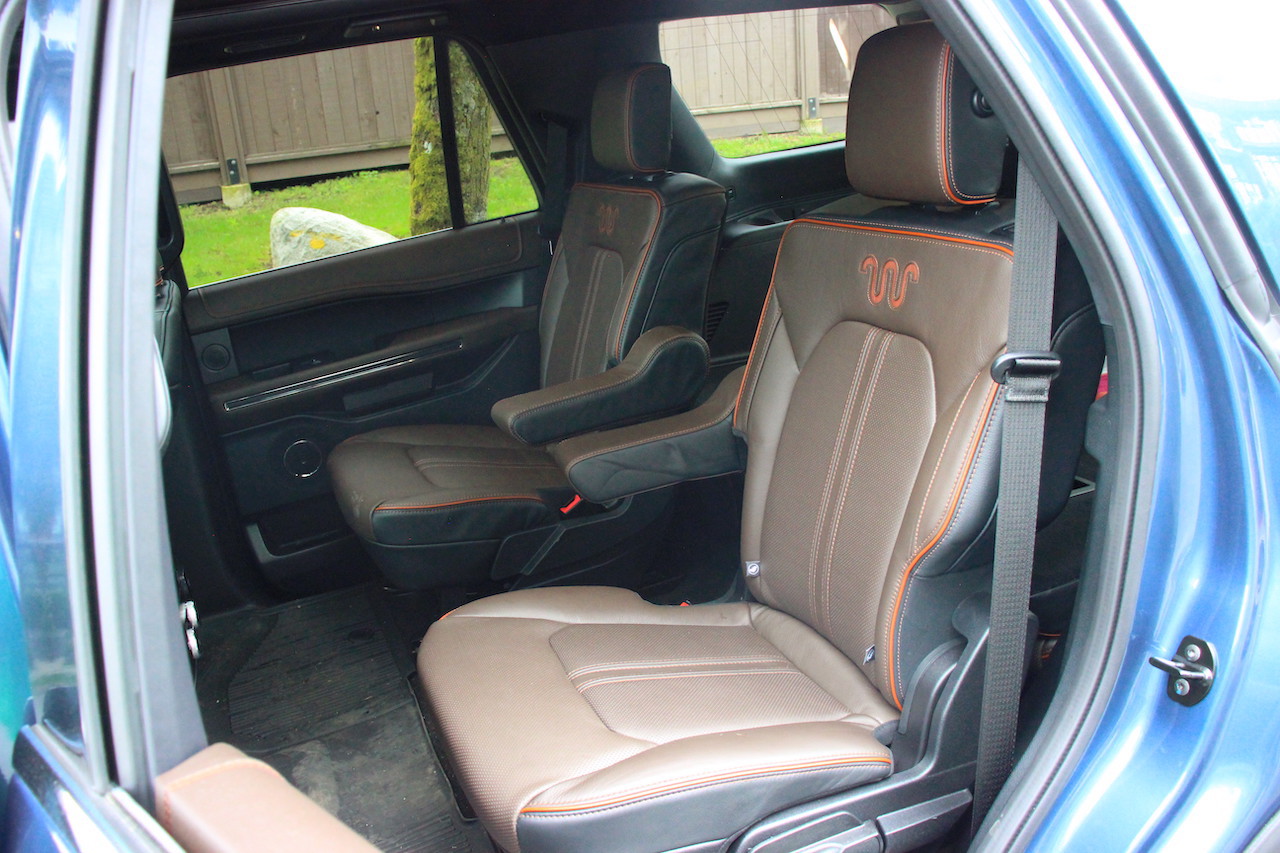 Plus, with the captain’s chairs you get tilt and slide seating so you can leave a child’s seat installed and not have to remove it to access the back row.

Such is the roominess in the third row (plus the practicality afforded by cupholders and two USB ports) that as an adult, I’d have no problem undertaking even medium-length journeys while sat there. Indeed, the only room the shorter Expedition gives up to the MAX version is in the cargo area; passenger room is roughly the same. You won’t get a fully flat load when the third- and second-row seats are folded, however, but there is up to 2,961L of cargo space. The third row is of the power up/down variety controlled via buttons on the cargo bay walls; the second-row seats can also be collapsed from there, but not brought back up again. 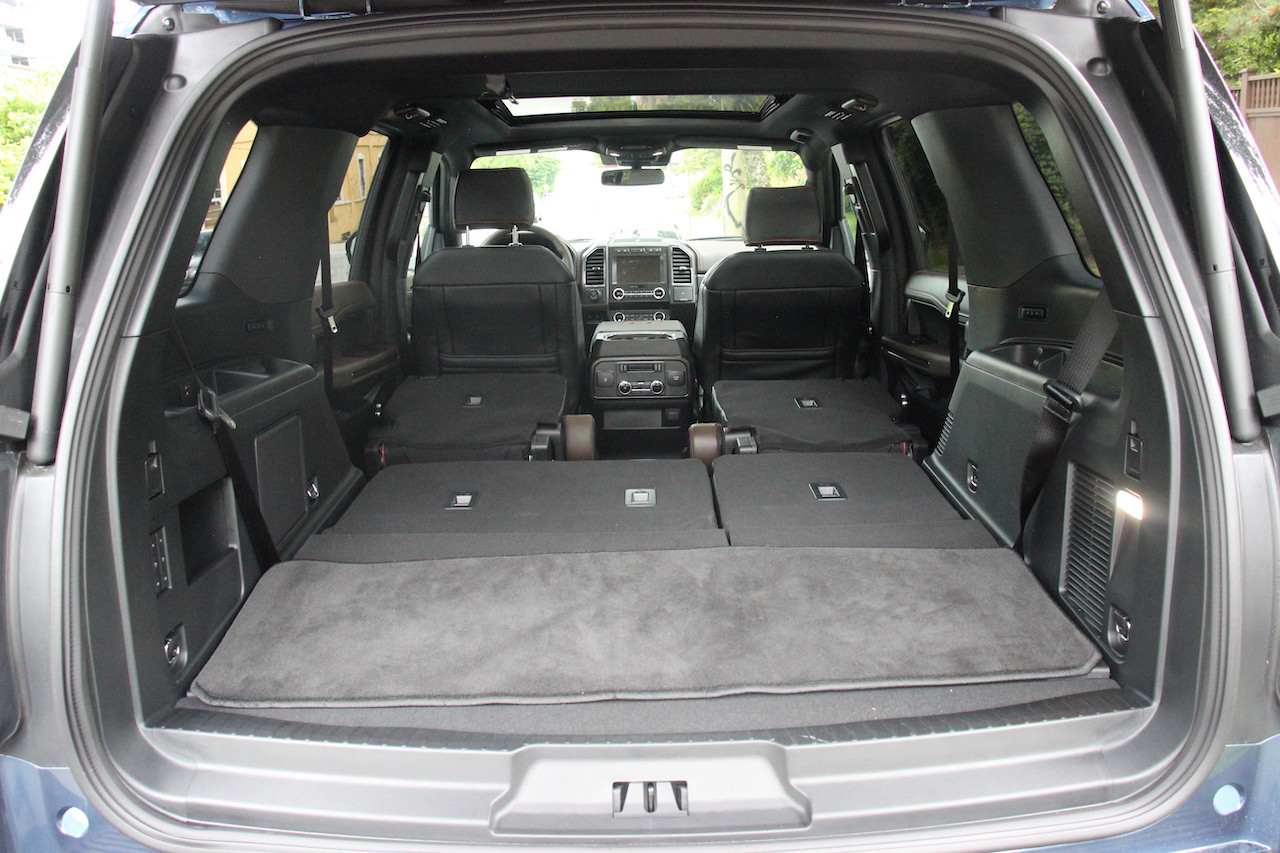 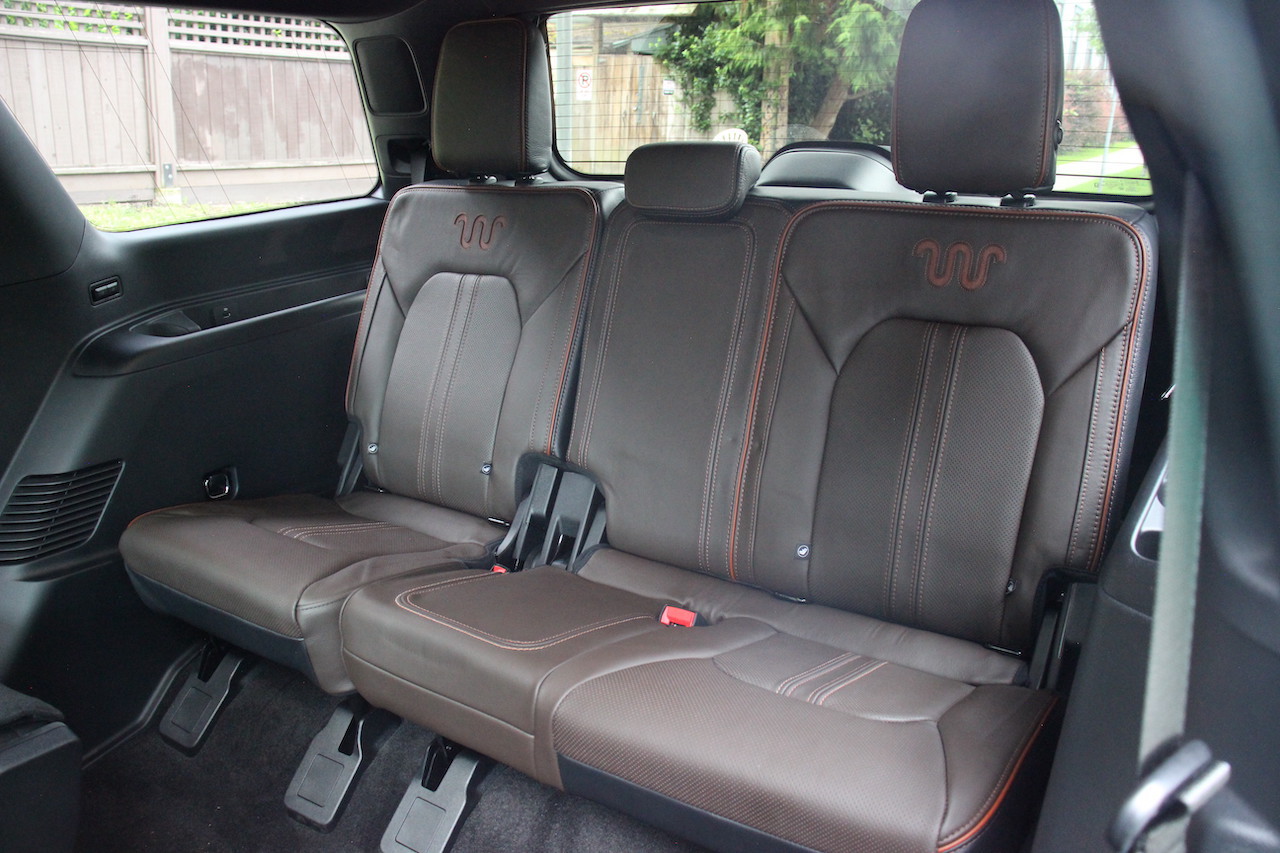 As big as it is inside the Expedition, there are some strange shortcomings. The climate control system, for example, is controlled via buttons that are quite small and like the heated steering wheel, can be tough to operate with gloves on. The sunglass holder is also a small, finicky affair (use the storage big atop the dash instead), and the 8-inch infotainment display seems small here. Maybe because the all-new Explorer gets a massive 10-inch option, one feels the bigger, badder Expedition should get one, too.

While some might dismiss the aluminum-block 3.5L twin-turbo EcoBoost V6 the Expedition gets (there are no other options) because it is “smaller” than the 5.0L V8 it used to have (and the F-150 still gets), they would be wrong to do so. This is a very smooth, capable and robust powerplant. The weight savings from the aluminum body and chassis construction, meanwhile, allow for a tow rating of over 4,000 kilos. 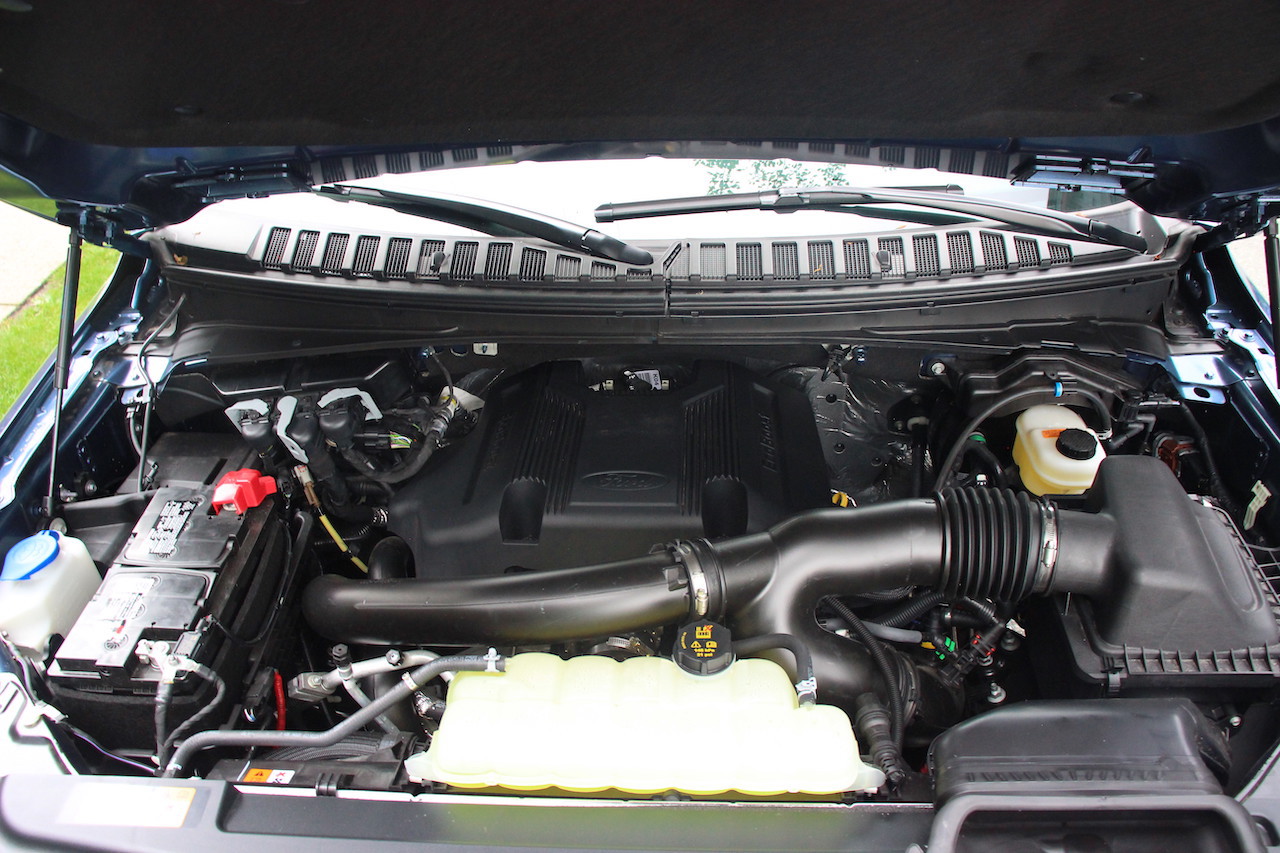 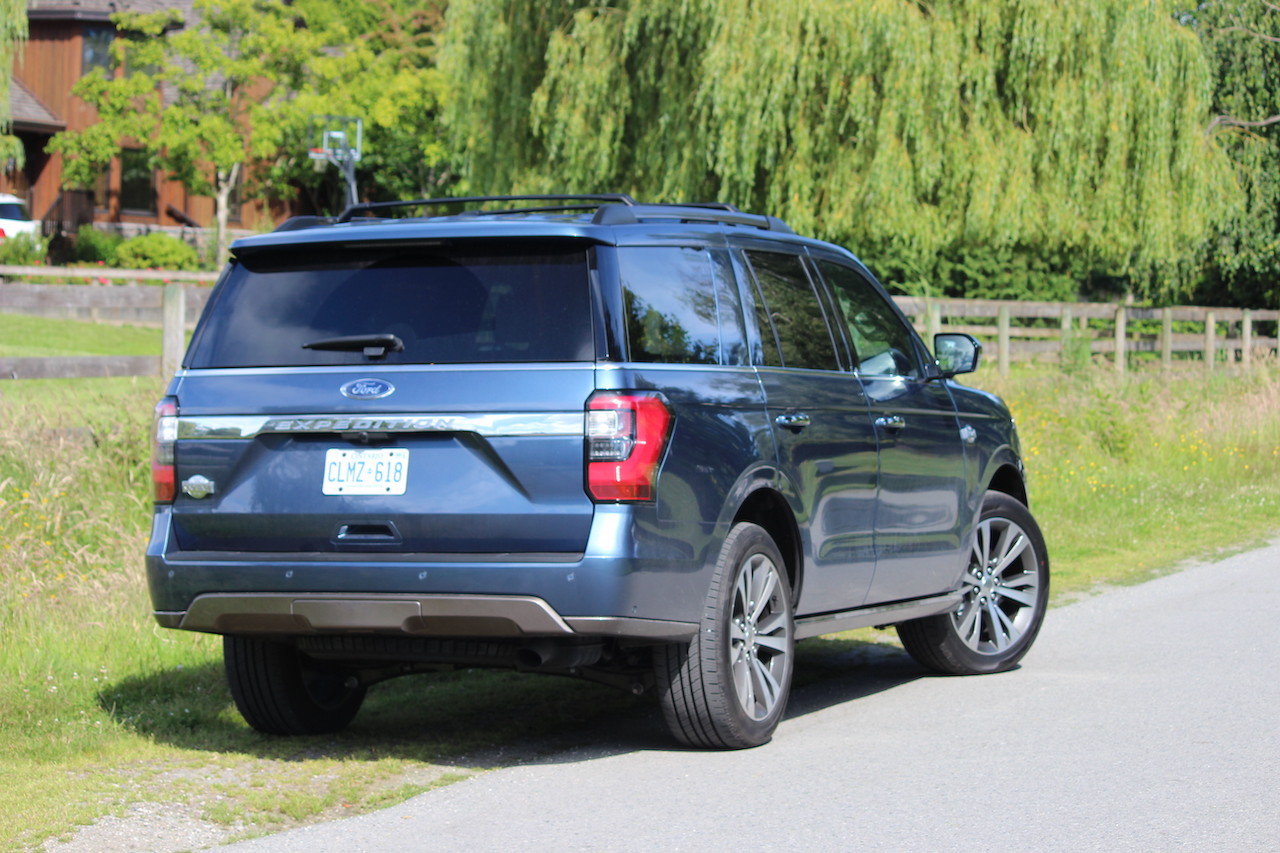 When unladen, the engine, coupled with the 10-speed dial-operated automatic transmission provides some proper acceleration. For even quicker throttle response, there’s a Sport-mode to go with the more SUV-typical modes such as grass/gravel/snow, mud/ruts and tow mode. It is comical that a massive three-row SUV like this gets a Sport-mode, but there you go.

The King Ranch rides as its luxury price tag suggests it should. There’s good balance through corners and little bob over bumps thanks to its independent rear suspension. It’s a quiet ride, too, and the power steering is such that around town, all you need is a single outstretched digit to turn the wheel.

Indeed, it’s luxurious to the point where you wonder how much better a ride its Lincoln Navigator cousin may offer.

That’s not my biggest concern, though. The bigger concern is the fact that with the Kia Telluride and Hyundai Palisade – two vehicles similar in size to the Expedition – those searching for a three-row full-size SUV have some very compelling alternatives that can be had at a significant savings when similarly equipped.

If you’re looking for a truck-based body on frame SUV, though, then the Expedition has turned the neat trick of being properly capable without having to resort to big, thirsty V8 power. Perhaps we should be paying it more attention after all. 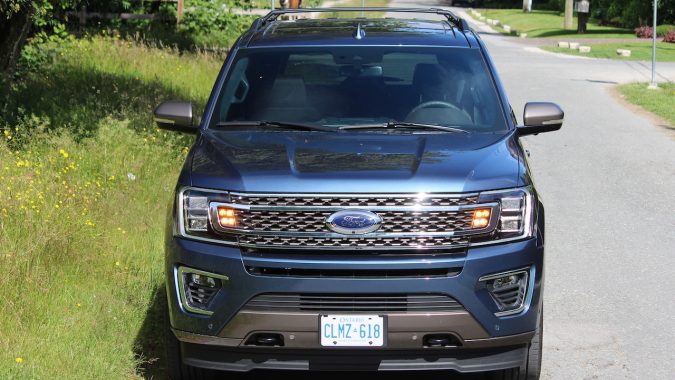 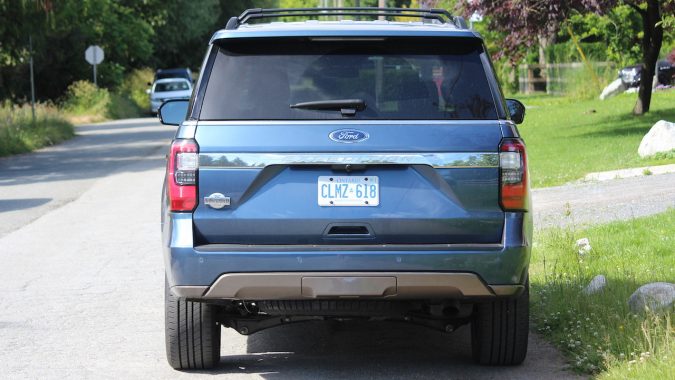 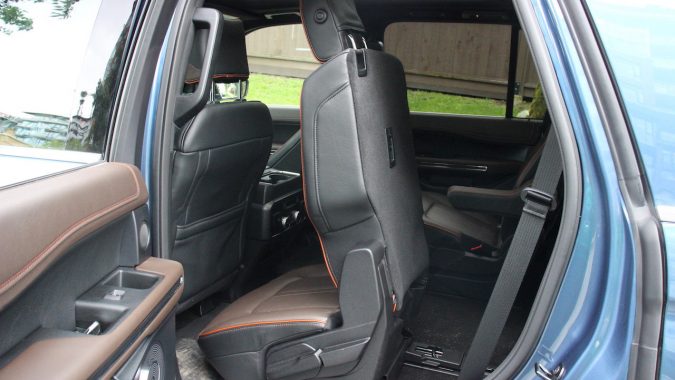 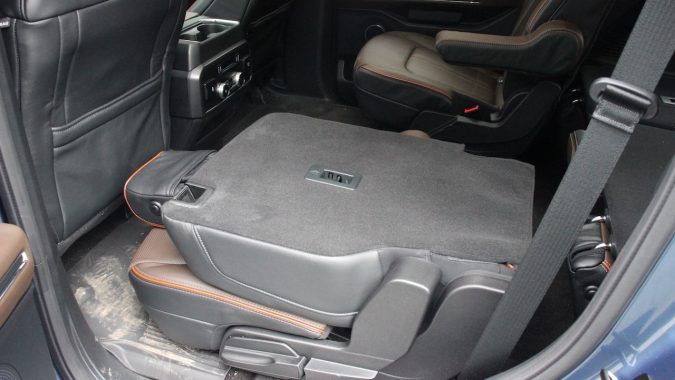 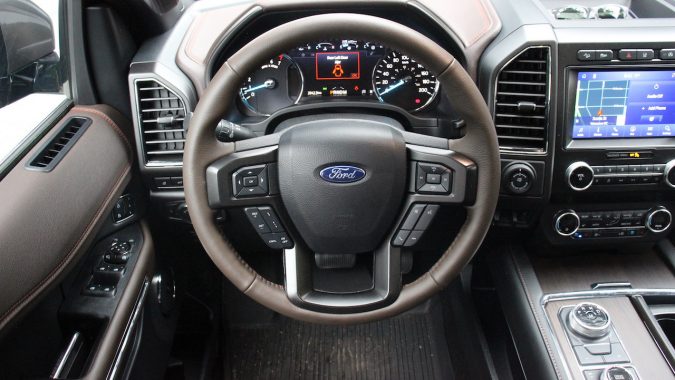 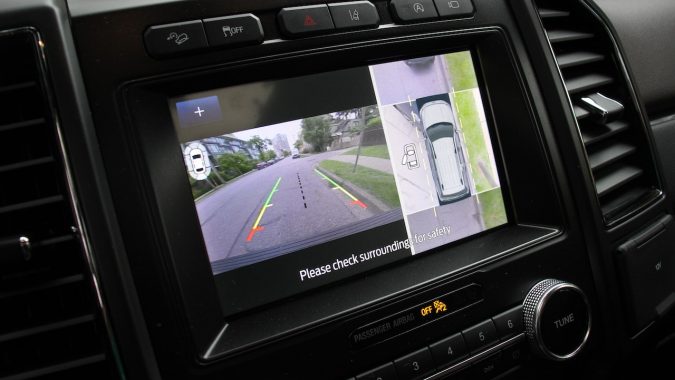