If you are looking for an example of a vehicle that fits into the crossover category look no further than the Ford Edge.

It has the cargo capacity and interior space of an SUV but doesn’t really fit into that category and is slightly too large to be considered a wagon either.  It drives so much smoother than an SUV and benefits from better fuel economy and handling.

The Ford Edge has been filling the gap between the sedan and SUV since 2007 and has only received one major update with the second generation coming out in 2015. In 2019, it received a facelift which also introduced the new ST line that would replace the Sport trim level. ST or “Sports-Tuned” models have been in the Ford line up for many years and puts an emphasis on more power and a much sportier performance level than their more contemporarily badged namesakes.

The Edge was the first Crossover SUV to be emblazoned with the ST badging.

The Ford engineers have done a good job of making, what is normally a bland crossover, exciting. The 2.7 L turbocharged V6 pushes out an impressive 350 hp with an equally impressive 380 lb-ft of torque.  The eight-speed transmission manages the power with ease and transfers it to all four wheels through the AWD system. The suspension has been reworked to include larger anti-roll bars and stiffer shocks that help keep the large optional 21-inch wheels securely in contact with the road at all times. 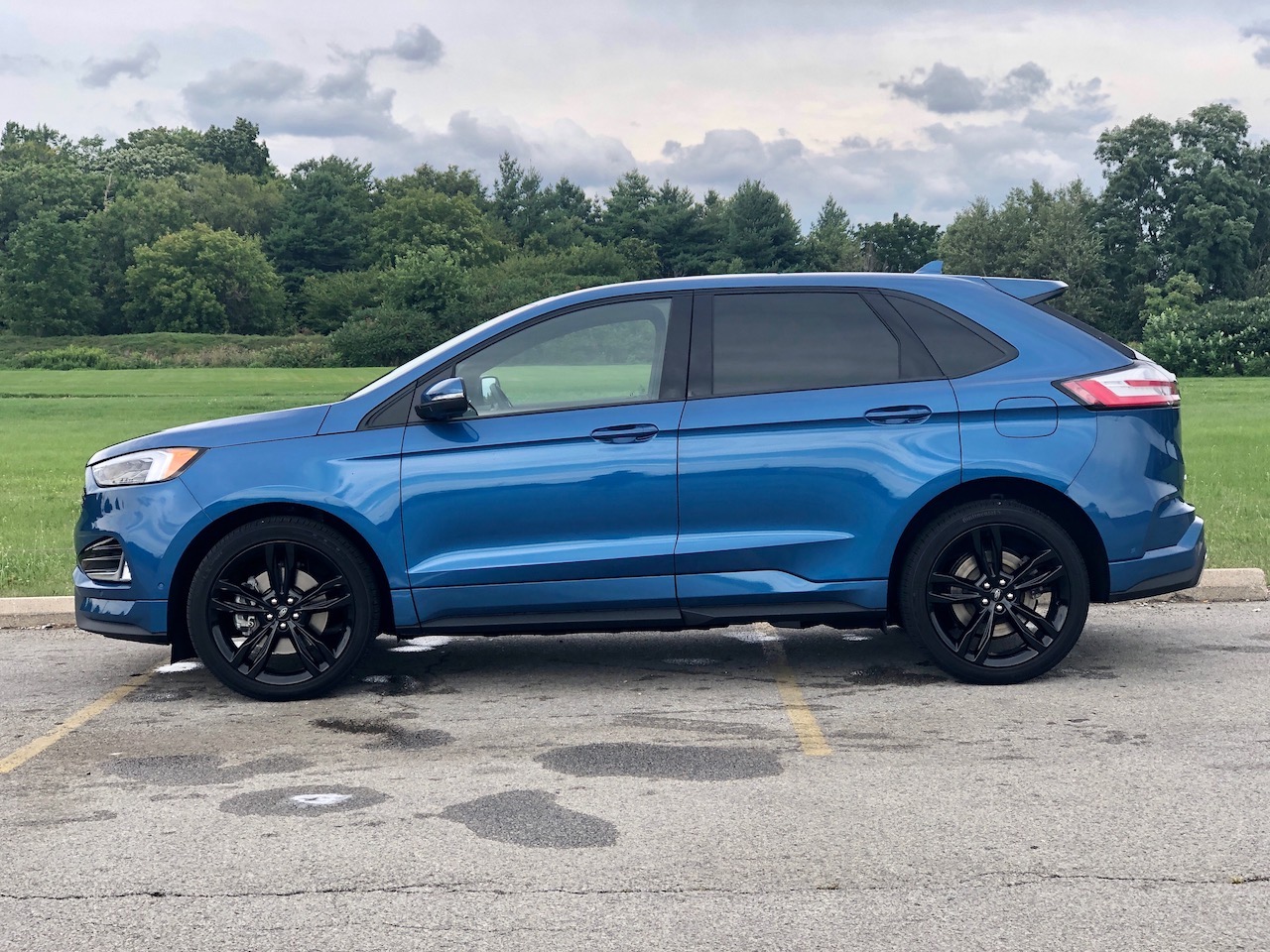 The ST comes with two drive modes Normal and Sport. By pressing the Sport button in the gear shift dial it wakes up the ST. The handling becomes tighter with gear shifts becoming quicker and more aggressive, the engine growl is artificially enhanced in the cabin by using the speakers system but manages to match the feel of the ST during acceleration. The edge is no lightweight but the V6 engine manages to get bit up to 100km/h in around six seconds which is a huge improvement from its non-ST branded brethren.

Going through the gears in Sport mode is rougher than in Normal mode, but it does the trick in getting the Edge up to speed while making it feel like a sportier sedan. Like its other ST branded siblings, the Edge ST comes with standard torque vectoring which greatly increases the handling when entering corners at speed. The reworked suspension does an admirable job of keeping it flat all through the bends especially for such a high-sided vehicle and keeps the vehicle fairly well balanced under heavy braking. The steering is crisp and precise and does a good job of transmitting what the front wheels are doing.

In Normal mode the Edge is much more refined, the engine is less noisy with the transmission being much smoother. The tightened suspension is more noticeable on rougher roads, but this is to be expected in a sports-tuned vehicle. Acceleration isn’t quite as harsh, but this depends on how hard you like to hit the pedal.

The interior of the Edge is becoming a bit dated, but the dash is still uncluttered and uncomplicated. The gear shift dial is mounted in the centre console leaving more room for storage.

The leather clad front sports seats are both firm and comfortable with enough side bolster to keep the driver in position during cornering. The steering wheel, seats and mats all benefit from ST logos differentiating the ST Line from the other trims, 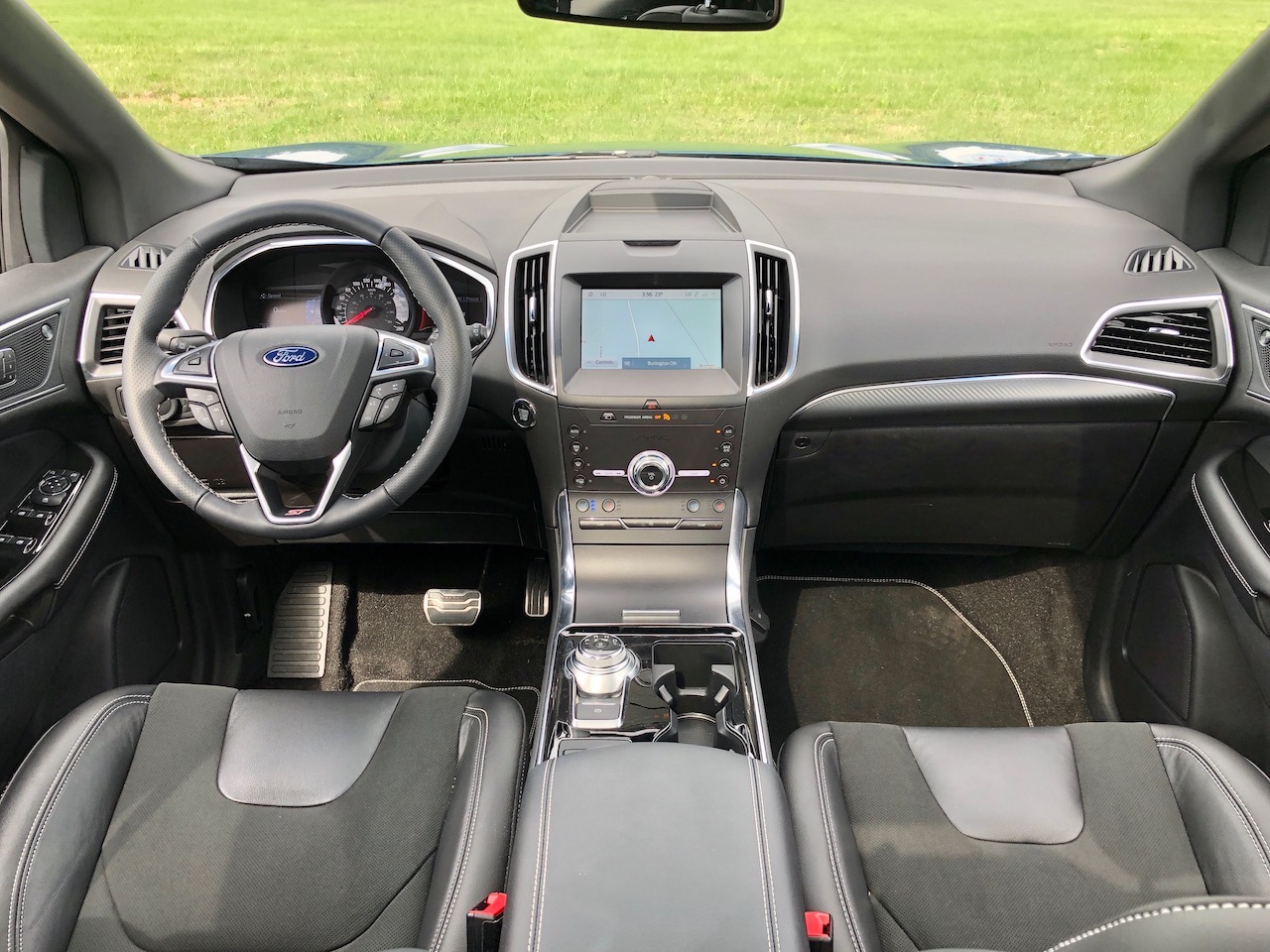 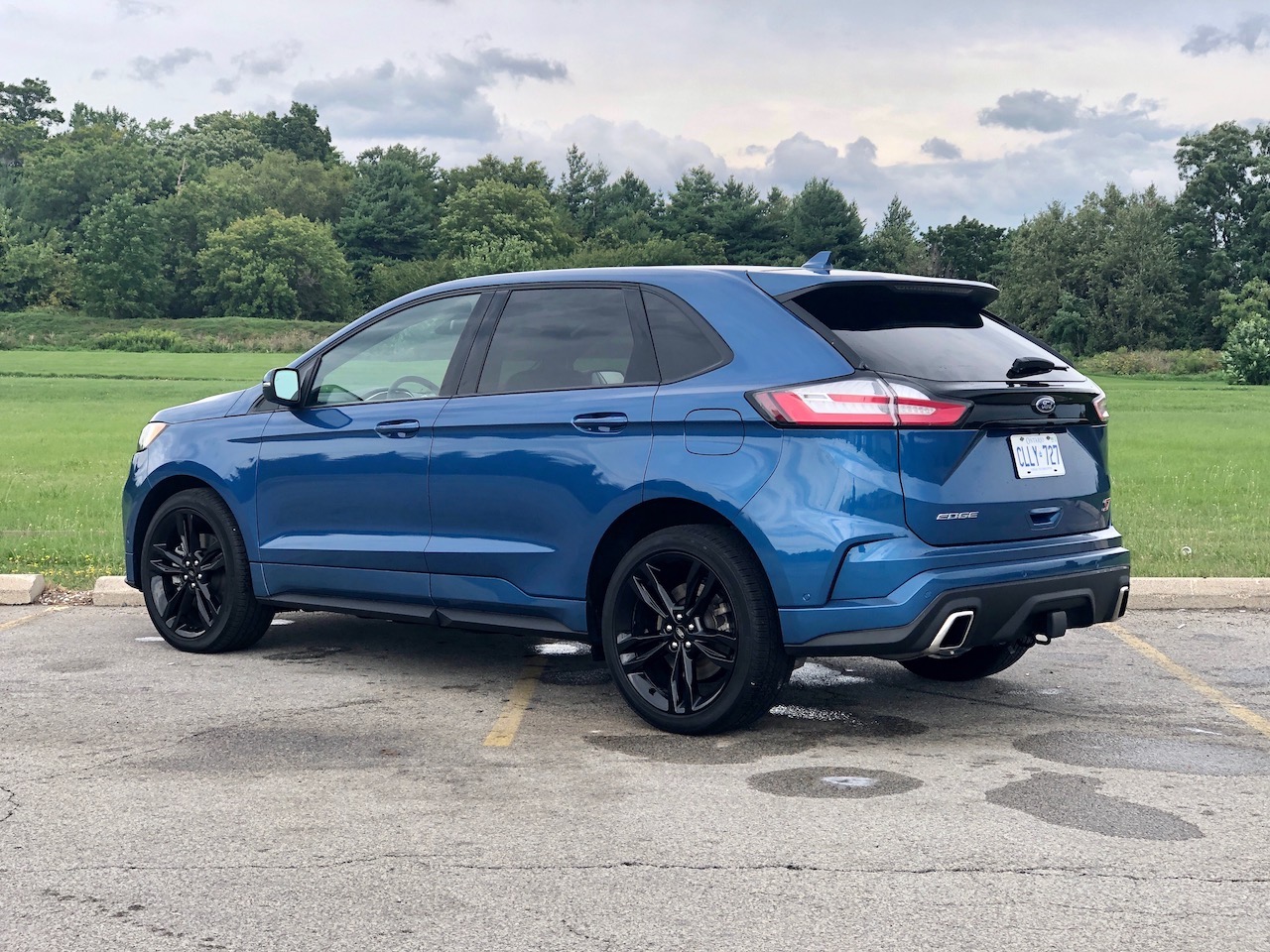 The cabin is spacious both up front and, in the rear, and does offer enough space for five adults to travel in comfort on long journeys. The cargo space is more than enough for daily errands with 1,110 litres behind the second row and with the rear seating folded it expands to a mammoth 2,097 litres.

The Performance Blue coloured ST I was diving gave it a bit of a sportier look, but the optional 21-inch premium aluminum wheels gave it that bit more of an aggressive stance even though they did come at an extra cost of $950.

Trapezoidal bright exhaust tips that are integrated into the rear facia differentiates the ST from its lower trim level family. ST badging is placed on the front grill and lower right on the rear hatch but is small and discreet and manages to downplay what it actually is.

Whereas the regular Edge is more for the daily commute or for taking the kids to school and sports events where extra space is needed. Adding the ST line makes for a much more exciting driver experience while carrying out the same mundane tasks.

It is fun, and at times, exhilarating to drive but manages to fulfill all of the tasks usually required of a cross over but allows the driver to have some fun driving time at the same time. 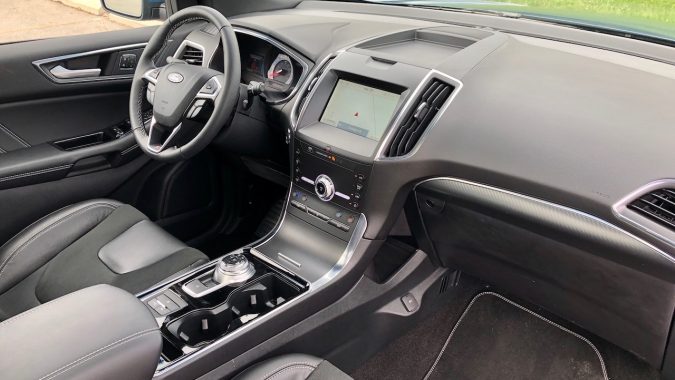 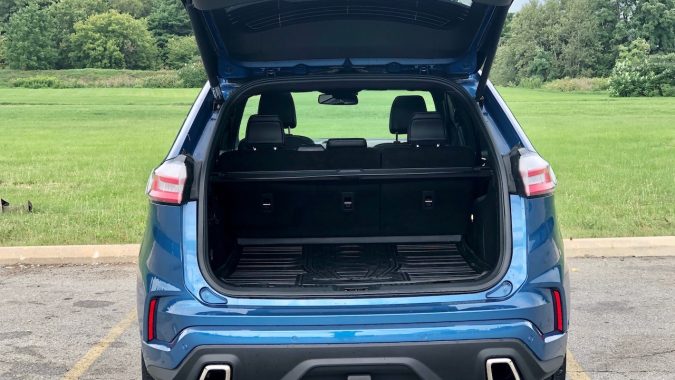