Remote operated dual power-sliding doors will change your life. But if you want that feature there’s only one type of vehicle you can buy that offers it and unfortunately it’s not a very popular choice.

Enter the minivan, the humble people carrier that puts practicality above vanity. There aren’t many left, which can mainly be attributed to the rise of the family crossover that choked minivan sales until most automakers had little choice but to abandon them.

Today there are only 5 to choose from and FCA produces two of those. One of them—the Dodge Grand Caravan—has been on offer largely unchanged since the last Bush administration. Built on an ancient platform it shouldn’t be confused with the newer and more upmarket Chrysler Pacifica that went on sale for the 2017 model year.

The Pacifica was a brand new design positioned to replace the old Town and Country and compete directly with the Toyota Sienna and the Honda Odyssey. 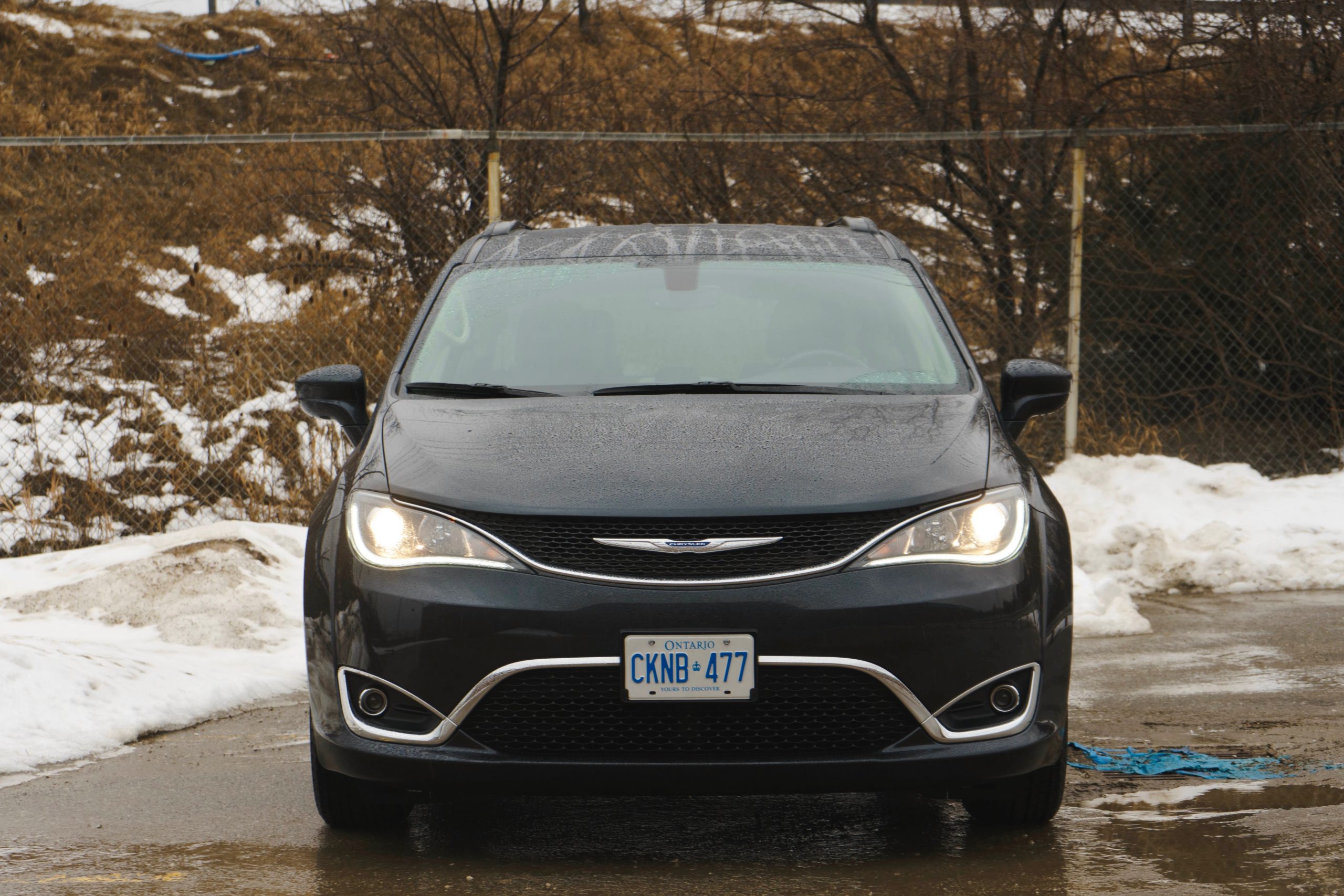 For 2021 Chrysler is giving the Pacifica a mid-cycle update which includes refreshed styling, more standard safety equipment, and most importantly the availability of all-wheel drive. While that might be enticing enough to warrant holding off on that purchase for a bit longer, there’s still plenty to love about the 2020 model you see here on these pages.

The mid-grade Pacifica Touring that I drove around for a week was satisfying, relaxing, and easy to live with. For parents that already have a tough time raising kids and balancing hectic schedules, this is a vehicle that will make your day easier.

A minivan’s raison d’être is space for passengers and cargo, and for that, they cannot be beat. Essentially just a big homogenous box, a van’s shape allows maximum storage at the expense of any sort of style. They are the automotive equivalent of plain white bread but no crossover or SUV, no matter how gargantuan will hold more as easily. 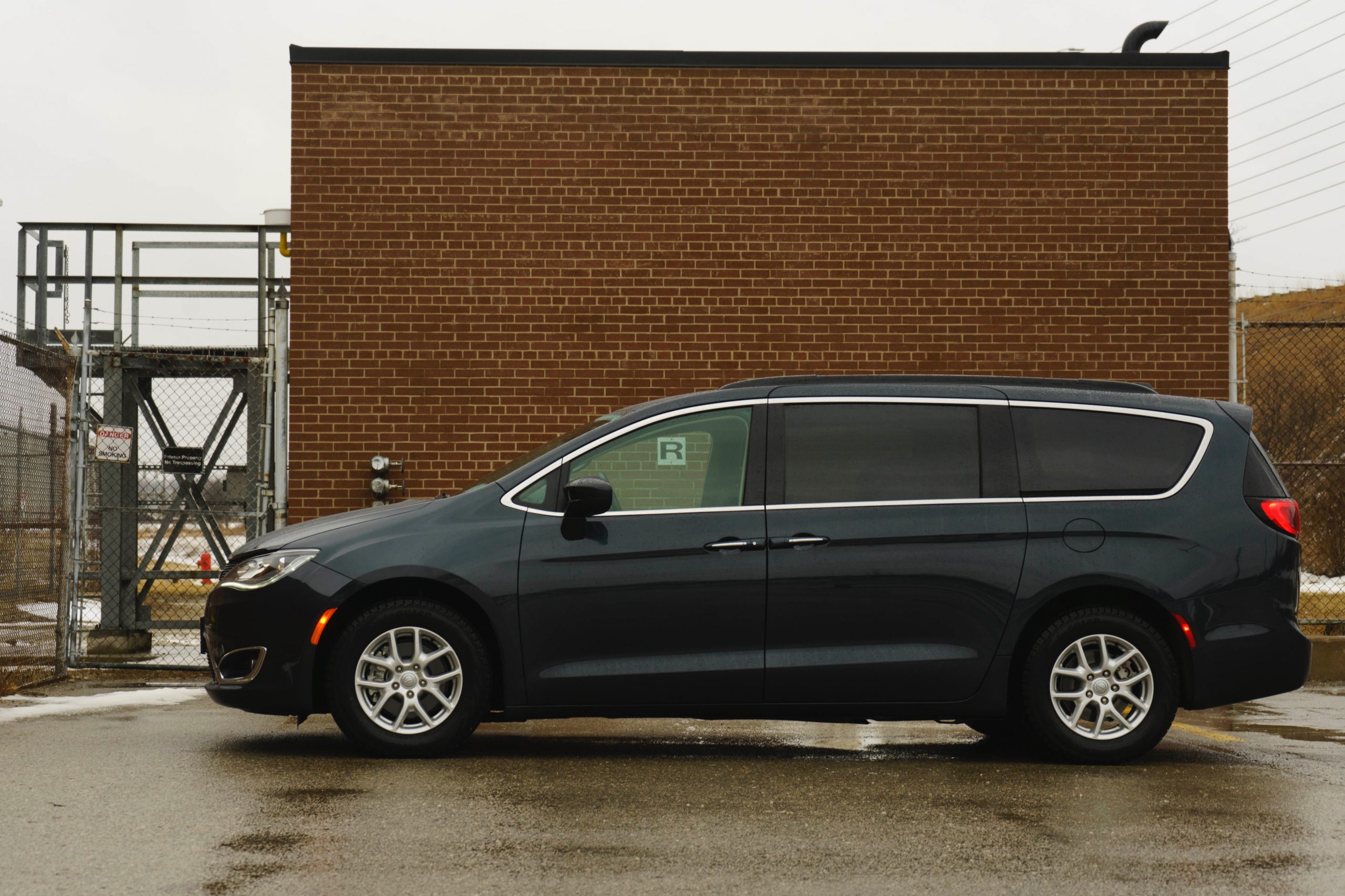 The Pacifica has three rows of seating for up to 8 passengers, enough LATCH anchors for up to 6 child restraints, and can still hold over 900 litres of stuff in its cargo area. And that’s before folding any of the rows down. Before you go thinking that the third row is one of those penalty boxes designated for unruly ragamuffins, rest assured that a couple of 6-footers would have no problem at all getting comfortable back there.

When you need to carry more luggage than people, Chrysler’s popular Stow ‘n Go feature makes it child’s play to quickly collapse a row of seating. The nice thing here is that the seats fold into the floor creating a flat load space in seconds and it’s the best example of flexible seating you’ll find anywhere.

Both the Sienna and Odyssey have comparable cargo space behind their third rows, with the Sienna holding the most at 1107 litres. But the Pacifica does have the largest passenger volume out of the group and it indeed feels downright cavernous no matter where you’re sitting. 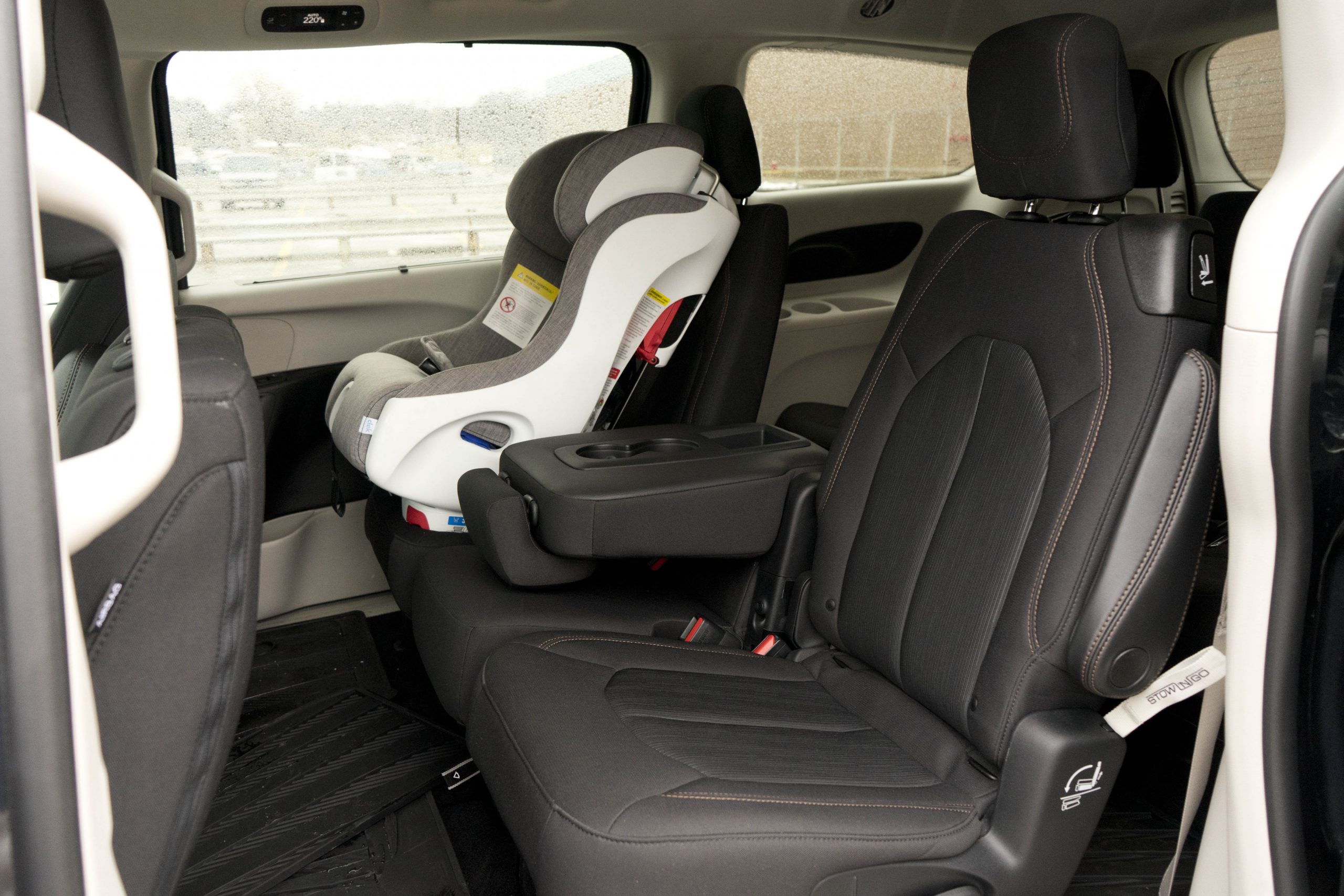 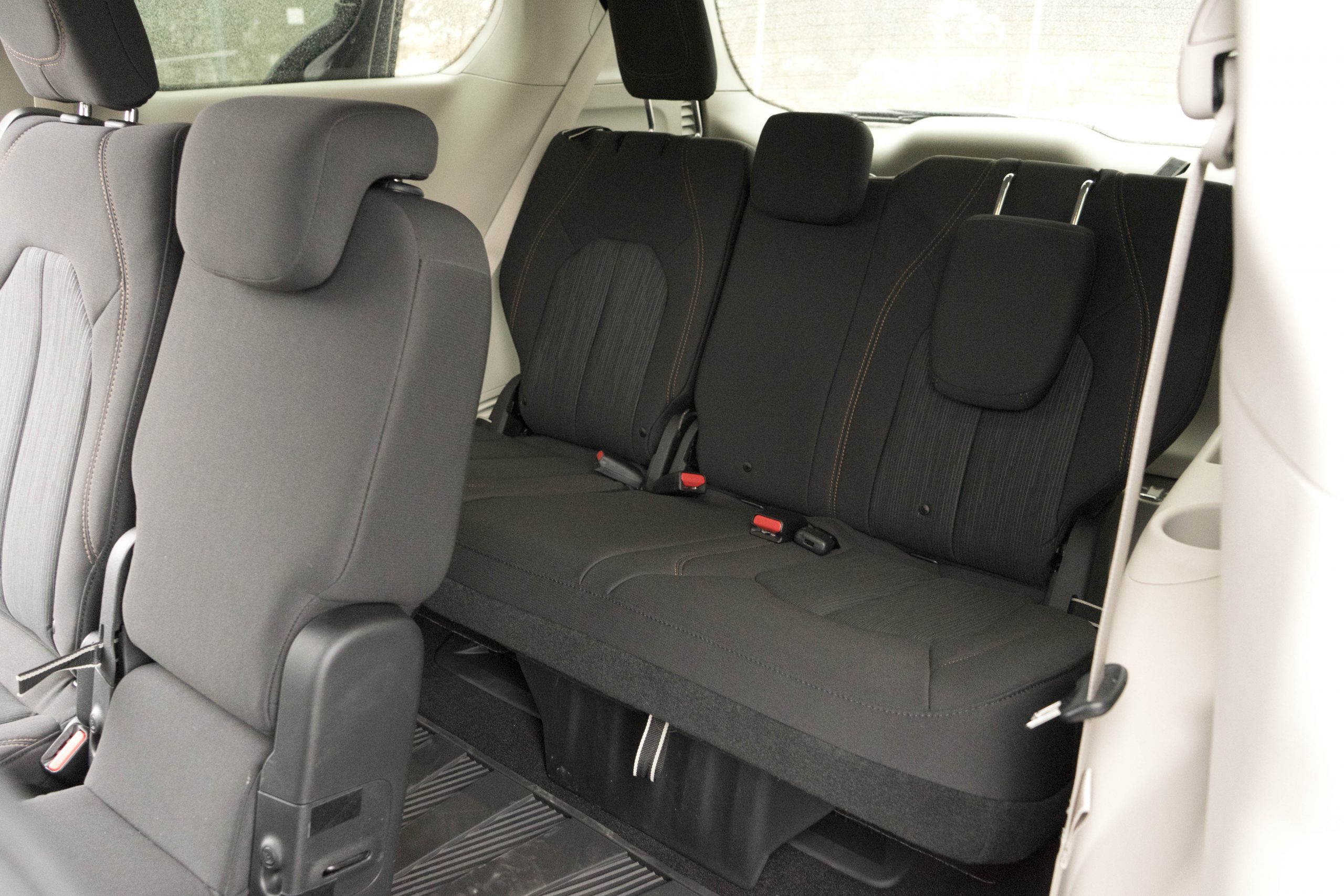 There are 6 trim levels of the standard (non-hybrid) Pacifica, and three for the plug-in hybrid version. The plug-in offers excellent economy and a pure electric drive mode but a starting price of $53,000 before rebates make it an expensive proposition. Load one up to the gills and you’ll be nearing $70K before taxes…for a minivan. Shopping in that price bracket also lands you firmly in the territory of the white-hot luxury crossover and a tree-hugging minivan has little chance of going up against one of those on the sales floor.

While the non-hybrid Pacifica isn’t exactly cheap it’s competitive in its class and does offer up a lot of value all things considered.

For starters, they are fairly well equipped. For right around 35 grand a base Pacifica comes with a 3.6-L V6 sending 287 hp to the front wheels via a 9-speed automatic transmission, a plethora of storage cubbies, seating for 7, a Stow ‘n go third row, a 7-inch Uconnect infotainment system with Android Auto and Apple Car Play, keyless entry, and a surprisingly thumpy 6-speaker stereo system with Active Noise Cancellation.

The Touring model I drove added automatic headlamps, tri-zone automatic climate control, a 12-way power driver’s seat, foglamps, second-row sunshades, and most importantly the trick Stow ‘n go disappearing seats to the second row. When the seats are not stowed in the floor, you can use that space as a very handy storage area. Brilliant. 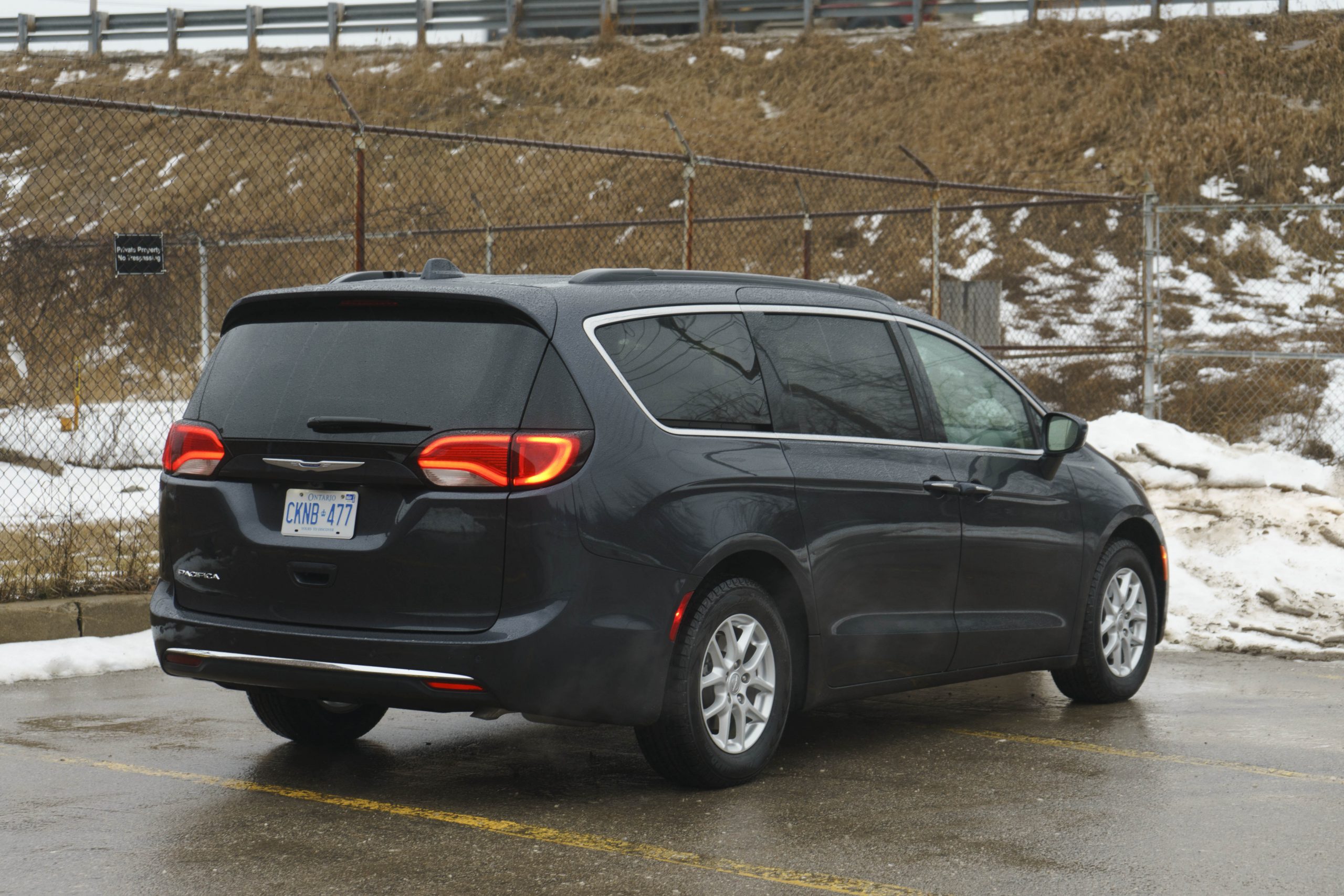 A Pacifica might not officially be classified or badged as a luxury vehicle but you’d have a hard time convincing me that it wasn’t. Some of the very best, like a BMW 7-Series and a Mercedes S-Class do more than just throw leather and wood at you, they’re extra-large vehicles with a lot of cabin space for occupants. They’re also pin-drop silent and have suspensions that feel like they are fashioned from cumulus clouds.

My Pacifica tester didn’t have leather seats and the fabric covering them wasn’t particularly pleasing to the touch but they were all-day comfortable. Ditto the ride, which was impeccably smooth on all but the absolute worst roads, and even then it was better than many so-called luxury vehicles. It’s church quiet too, enough so that I had to check if it had double glazed windows (it didn’t). Active noise cancellation through the stereo probably has something to do with it but the new chassis is commendable in the way it can absorb and dissipate impacts.

Toddlers will definitely appreciate their comfy new digs. Parents will too, especially when the Cheerios manage to stay in the bowl rather than all over the carpet. 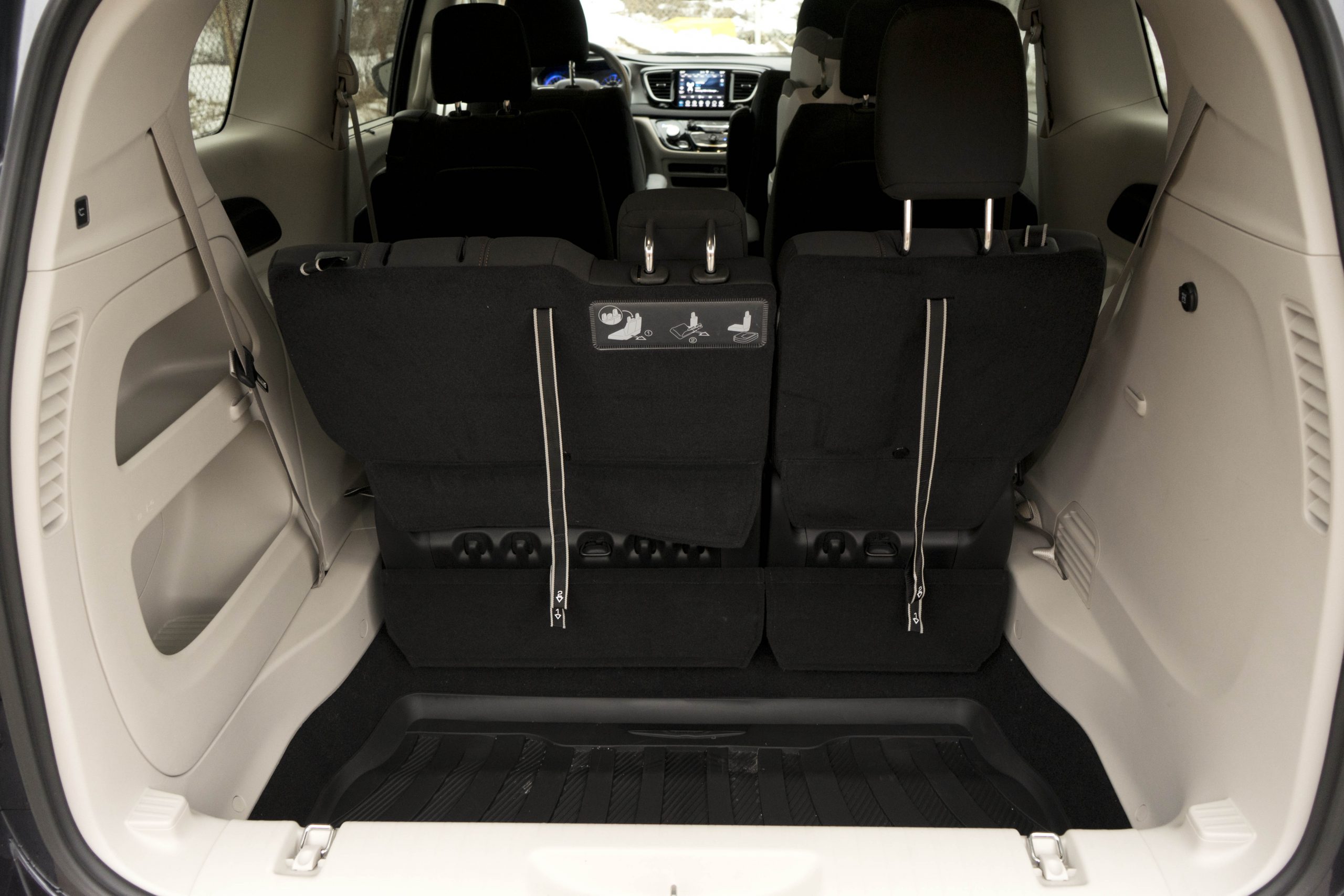 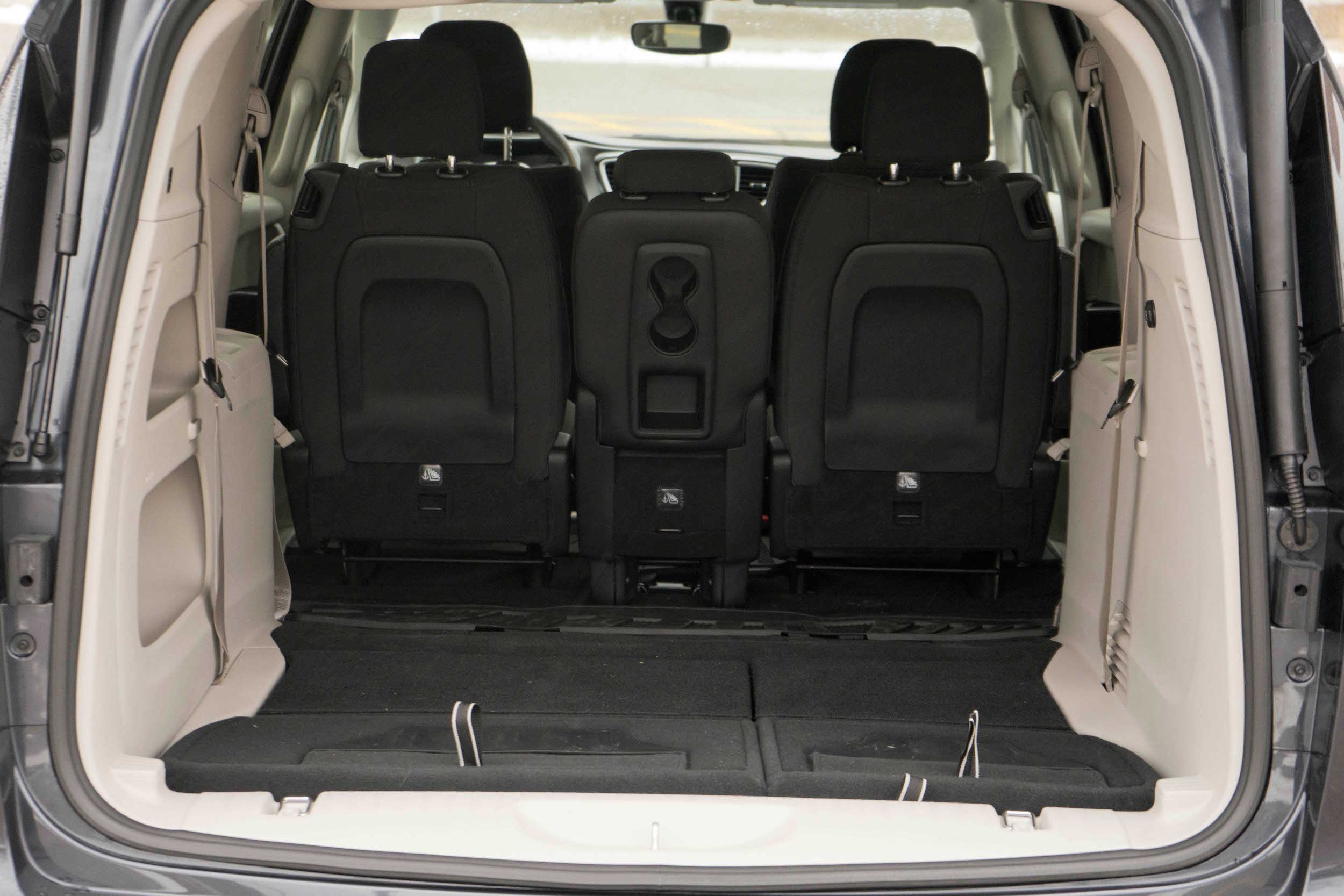 Extra points get awarded here for a minivan that behaves itself when the road starts to twist. Thank that new chassis once again, which trades the old twist beam for a sophisticated multilink rear suspension setup. Where I was expecting the Pacifica to wallow around like a sea lion, I found it to be stable, planted, and easy to maneuver. Body motions are well controlled and the only flaw in the handling ointment was steering that was rather vague and a bit too light for my tastes, although perfectly acceptable for this type of vehicle. Compared to the Honda Odyssey, which I also thought handled pretty well, the Pacifica is better in nearly all respects. The Honda did exhibit slightly better steering feel but can’t quite match the Chrysler when it comes to its quiet, composed drive and overall refinement.

The port-injected Pentastar V6 used in nearly every FCA product has never felt better than it does here. Coupled to a smooth-shifting 9-speed auto that doesn’t hunt for gears as much as the Honda, it further enhances the quiet and refined theme that permeates the Pacifica’s character. Yet, call for power and it responds quickly without having to wait for any turbos to spool. Power builds linearly and there’s ample reserves for passing slower traffic and merging on to the freeway.

Provided you don’t have a heavy foot you can expect reasonable economy as well. During my time with it over a good mix of city and highway surfaces, the gauge settled around 11.9 L per 100 km. Expect that to drop under 10 if your typical drive involves mostly highway or country roads.

It’s difficult to find negatives about this van. I felt that some of the interior materials lacked a little in quality, like the top of the dashboard that could have used a softer covering. However, fit and finish are generally excellent and the ergonomics, ease of use, and thoughtfulness of the layout are hard to fault. While you can get fancy Nappa leather and nicer interior trim on the higher-end models, I’m not sure that those features are necessary on a vehicle where muddy boots and spilled milk will be regular occurrences. If you’ve ever tried to clean up dried up puree from tiny seat perforations you’ll know what I’m on about here. 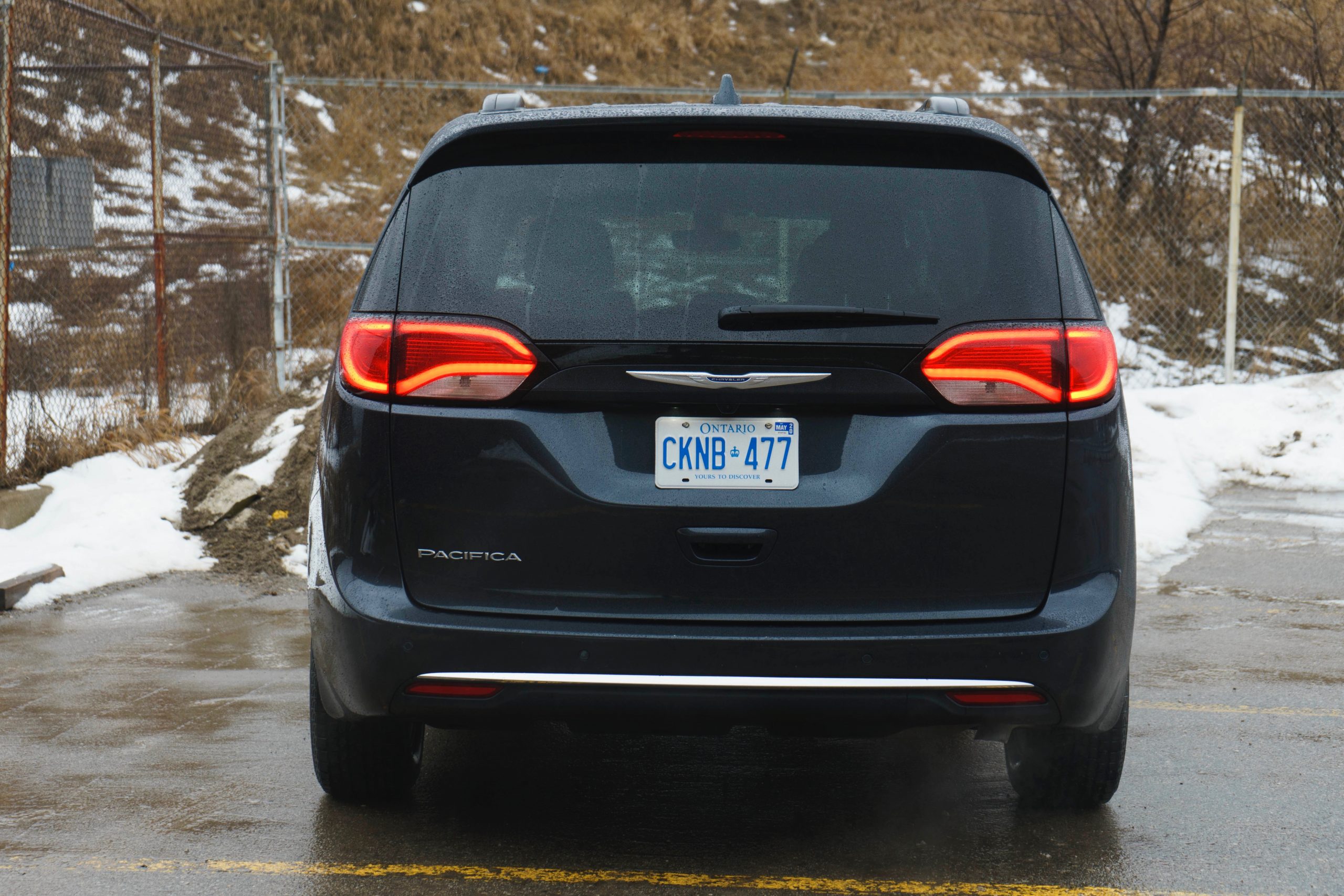 It’s typical that the press vehicles we journalists are privileged enough to drive are usually of the fully-loaded variety, so it was nice to see this tester with a spread of options that more realistically reflects how the bulk of customers build their vehicles. In fact, if I was the one signing off on the order form, this is pretty close to how I would configure one. There is a higher-level safety package that can be equipped that adds things like a 360-degree backup camera, adaptive cruise control, rain-sensing wipers, auto high beams, and more and it would only raise the price by $1000, so it does represent good value. But it’s worth noting that many of these features will become standard fare on the refreshed 2021 Pacifica, although there’s no word on the pricing of that one just yet.

The Pacifica is not only the best of the minivans, it’s a vehicle that also does a great job of mimicking a full-fledged luxury car, one that parents and kids and everyone in between will appreciate equally. If I were in the market for a family vehicle this would be my choice over any SUV, no question. 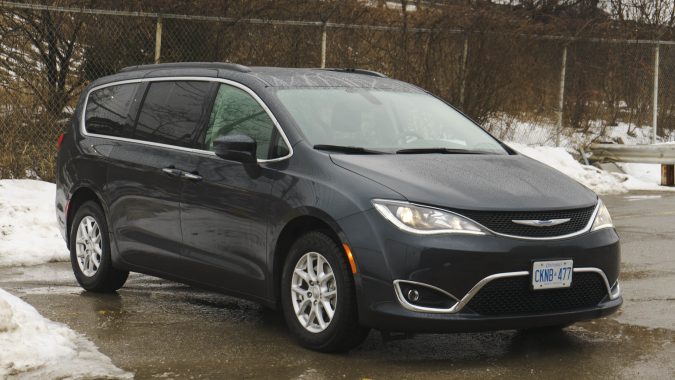 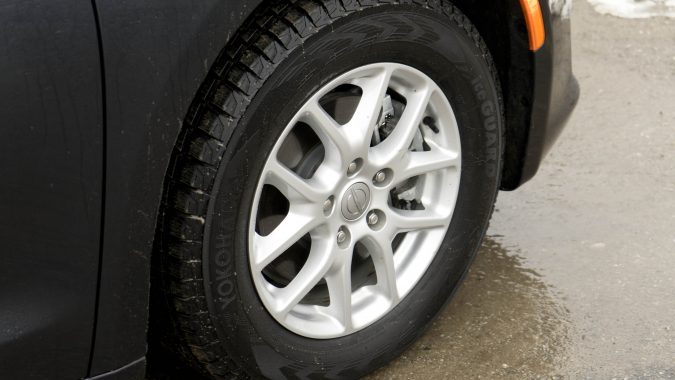 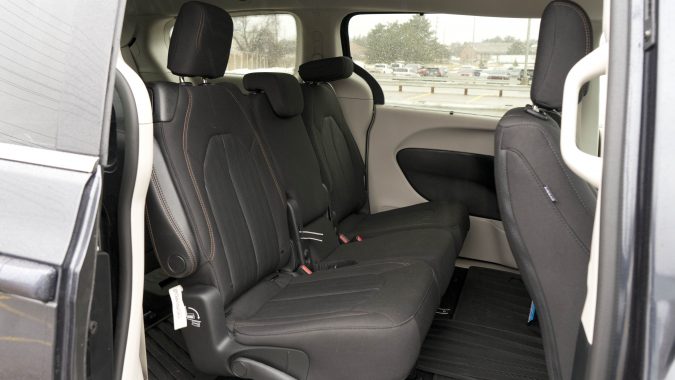 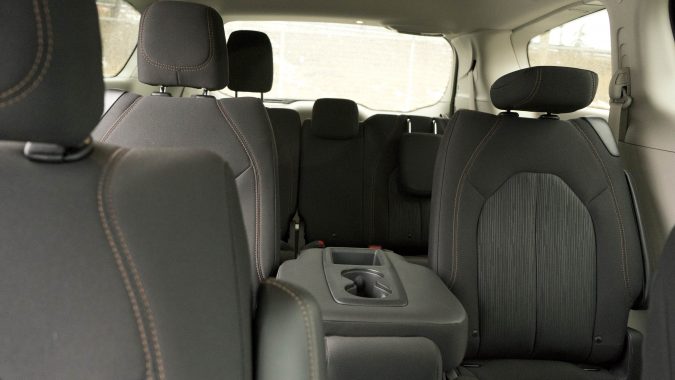 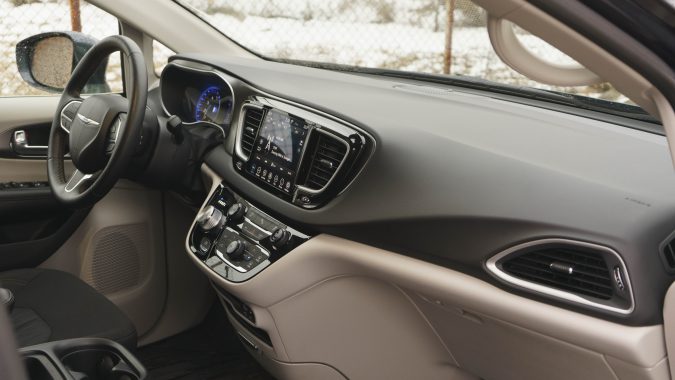 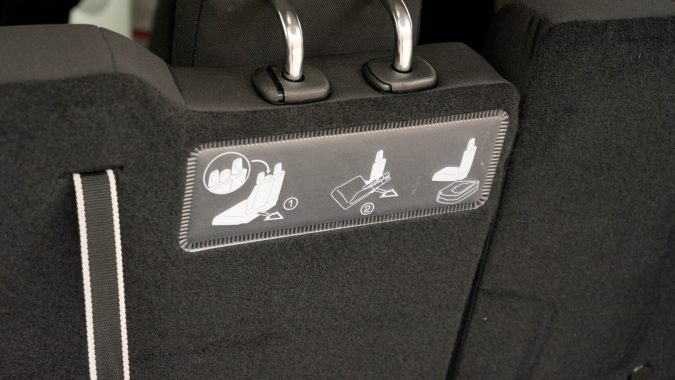 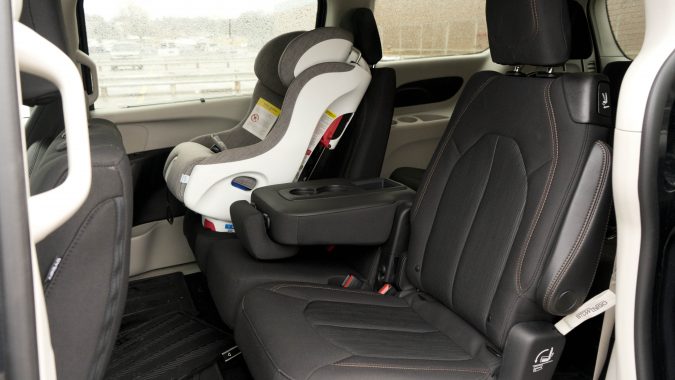 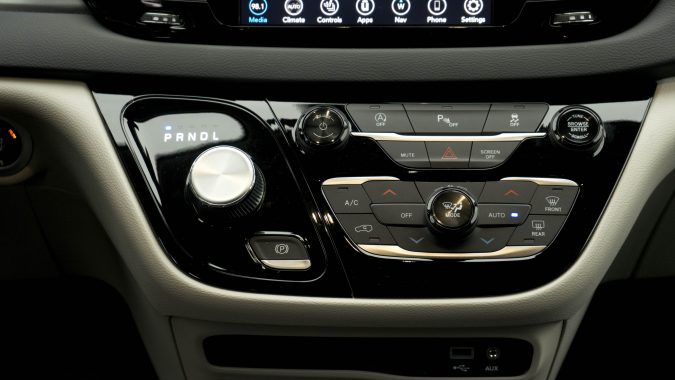 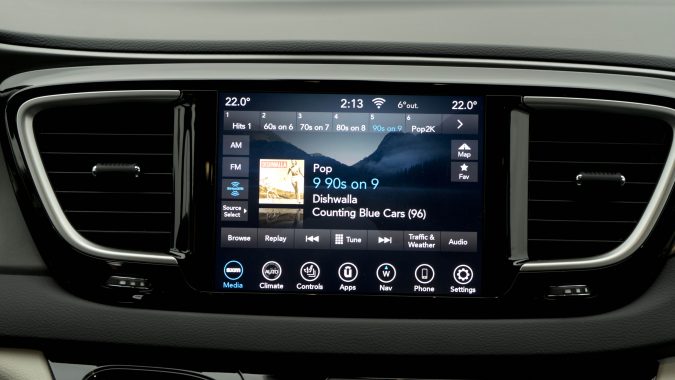 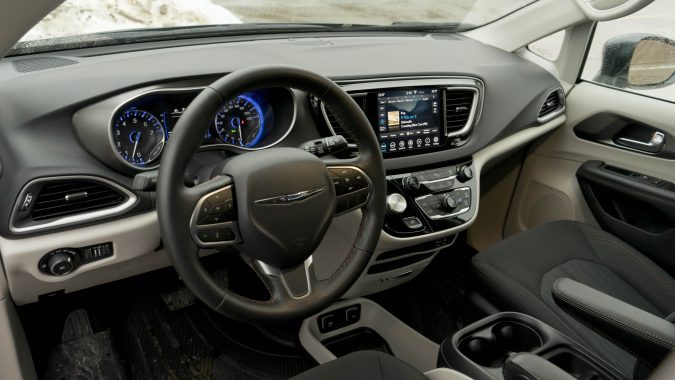 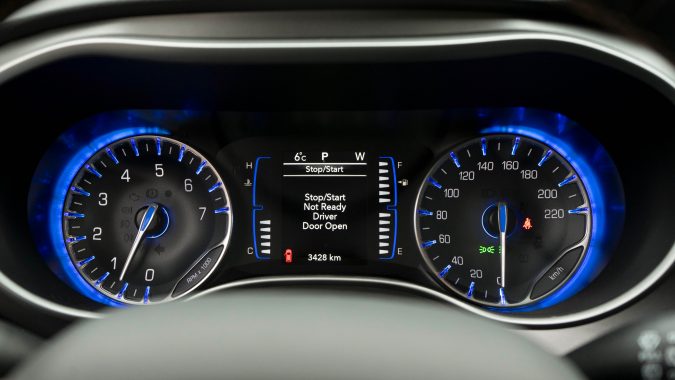