The 2020 Cadillac CT4-V’s solid engine and razor-sharp handling tells us a lot about where Cadillac is going in the coming years.

The “V” is back at Cadillac, and it’s back in a big way in that it isn’t only adorning the flanks of one new Cadillac sedan, but of two new Cadillac sedans: the CT4-V you see here and the larger CT5-V as well.

Perhaps it’s not all that surprising, when you think about it. Check that. The two new sedans thing is surprising as so many manufacturers – both luxury and otherwise, but more so otherwise – continue to ditch sedans and hatchbacks in favour of SUVs and CUVs, especially in North America.

The performance model thing, on the other hand, is less surprising because if you ask Cadillac – as we did – they’ll tell you that performance vehicles are in their DNA.

After all, they once competed in NASCAR. More recently, they entered the Northstar racer into world-class endurance races and more recently still, their CTS and ATS could be found on racetracks all over North America competing in various sports car championships. Let’s not forget, meanwhile, that there was once the XLR and XLR-V, vehicles that were – quite literally – the Cadillac of Corvettes as they rolled off the same line in Bowling Green, KY as did (and does) The General’s all-time sports car.

Well, it has a turbo four-cylinder motor as opposed to the six- or eight-cylinder units found in past “true-blue” V models like the CTS-V or ATS-V. Those roles will be filled by the upcoming “Blackwing” versions of the CT4 and CT5. Don’t think that makes the CT4-V any kind of a slouch as it’s still good for 325 horsepower and 381 lb-ft of torque from its 2.7-litre four. It’s available with either all-wheel-drive or with a lighter, more nimble rear-wheel-drive chassis. 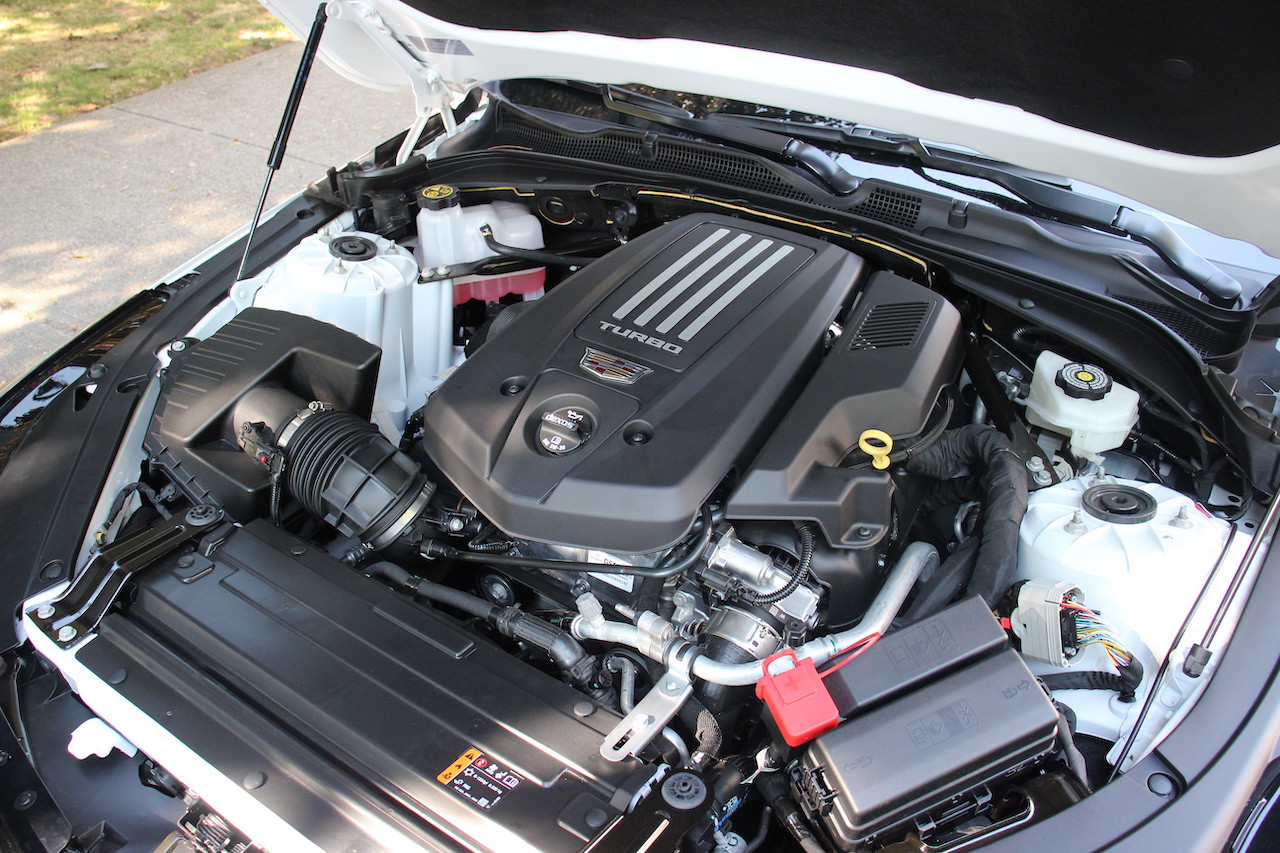 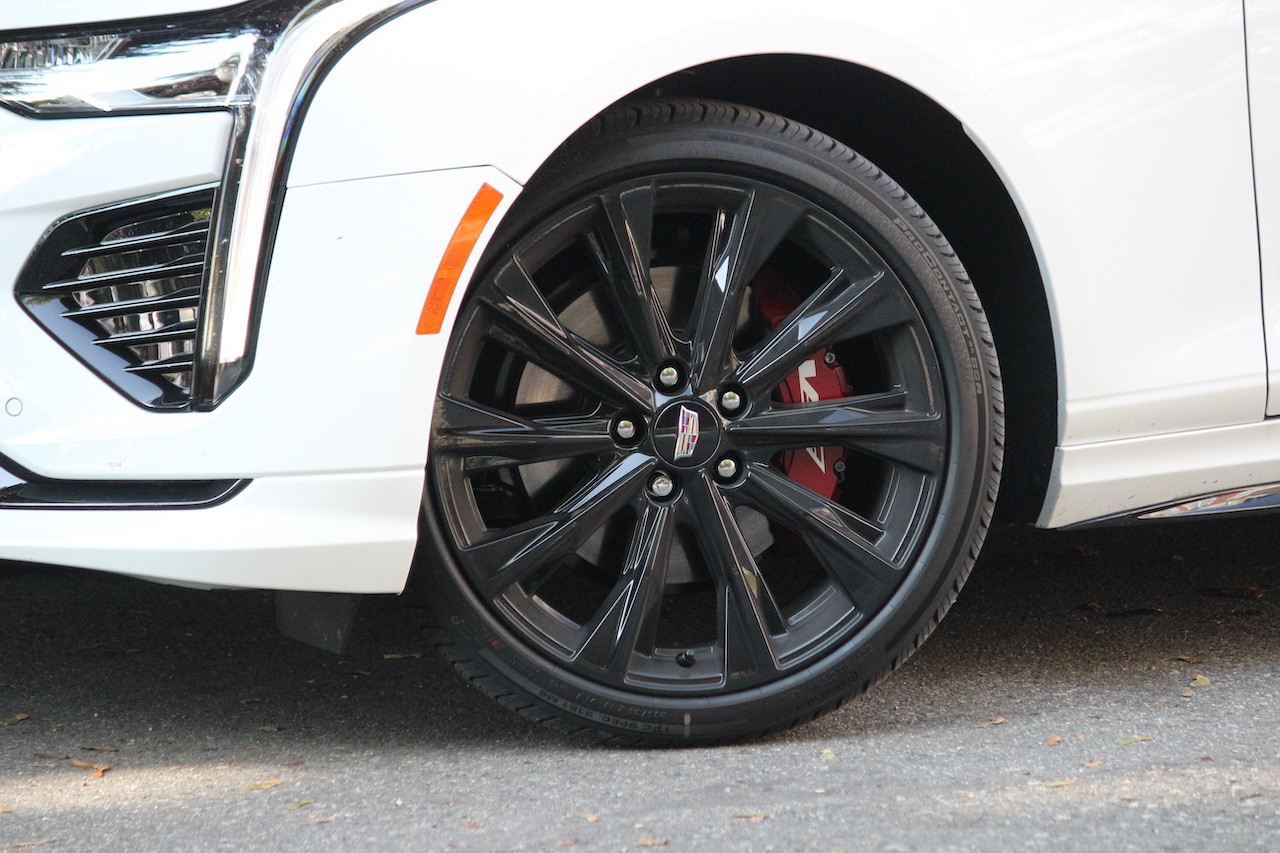 Which, to my delight, was exactly what I had. It’s always nice to shave a little weight off whenever you can and let me address one thing right here, right now: you don’t need AWD in a car like this. Would it help in adverse conditions? I suppose. Would it help on the track? For somewhat less-experienced drivers, sure, and Cadillac did say that owners will track their sedans.

Will it cost you more fuel? Yes, it most likely will. Are there more repair costs associated with AWD? Potentially, yes.

I understand the peace-of-mind AWD provides, but it’s not my choice.

The RWD tester I had feels fleet-of-foot right off the bat; you don’t need a challenging b-road to feel that as it’s a zippy affair thanks to the RWD weight savings (about 75 kilograms) and close-ratio 10-speed gearbox.

Once you do get to your favourite winding road, meanwhile, the CT4-V comes further into focus as a performance machine, but one with a few caveats.

The steering and handling, though, do not fall into the “caveat” pile because they are right on-point. The steering has great weight that changes depending on which of the four drive modes you’re in – Tour, Sport, Track, or Snow – or can be done so via the V-Sport menu. There, you can tailor your throttle settings, suspension settings, steering settings and even your brake responsiveness to your preference and then call all of it up by hitting the “V” button on the steering wheel. Further to that, you can also independently adjust how your traction control system acts, which will allow more or less slip depending on what you’d like. 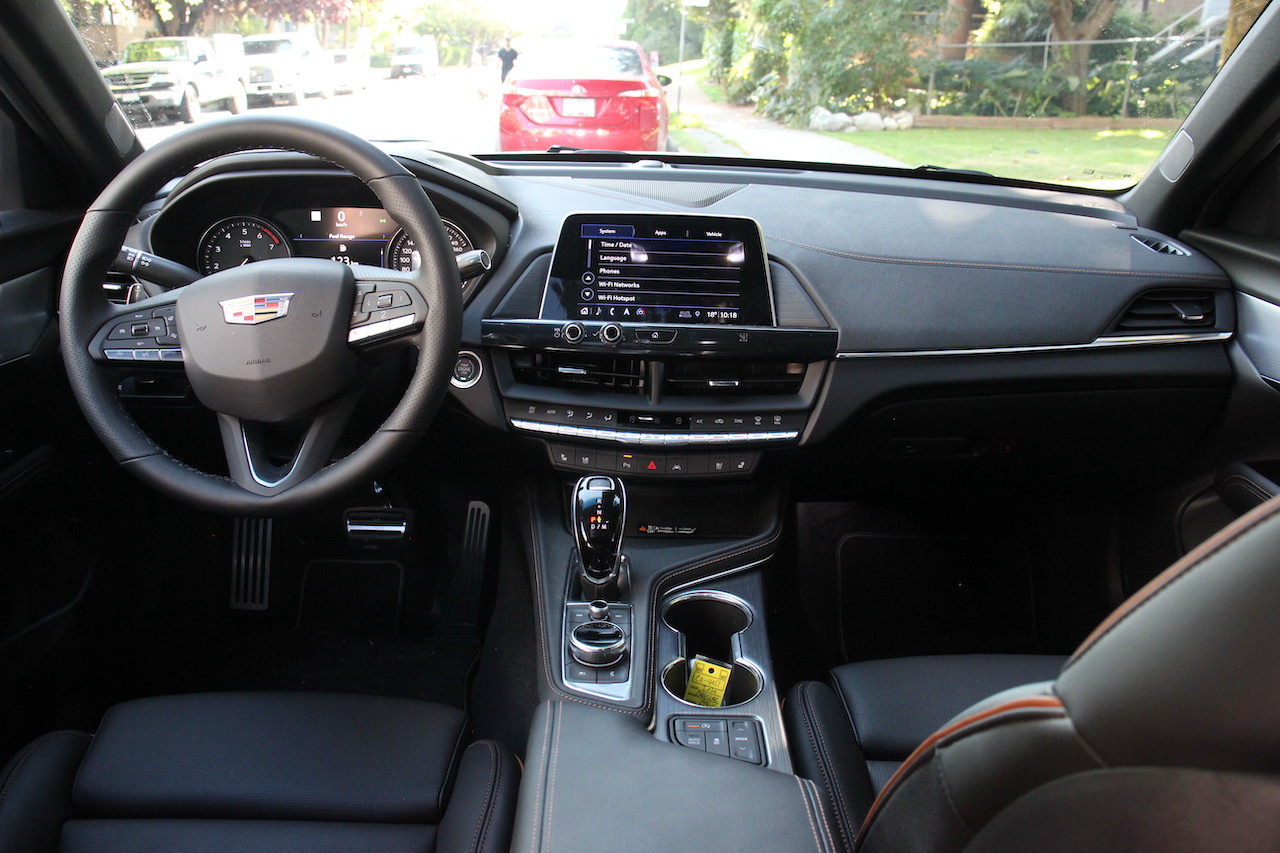 Is it all a little too much? Perhaps, but Cadillac insists that its research shows that this is what some Caddy drivers want.

After a little bit of tweaking, I settled on Track steering, Sport powertrain and Sport brakes and the only thing I never quite got the feel for was the brakes. No matter which mode I tried, the pedal feel was too wooden for me. It’s not that the brakeforce is bad, I just don’t like the journey there. Otherwise, the CT4-V is a heck of a handler with whip-crack turn-in and well-controlled body-roll that is befitting of the “V” name.

Which brings us to the transmission.

The area that may cause more actual pause for buyers, though, concerns the interior. Don’t get me wrong; the materials used are fine and the space up front works, as does the driver’s seating position. It’s quite dark, though, even with the sunroof and there isn’t a whole lot of styling here. It’s classy, yes, but if you compare it to the digital gauge clusters and flared surfaces you find in a Mercedes or BMW, it’s lacking. 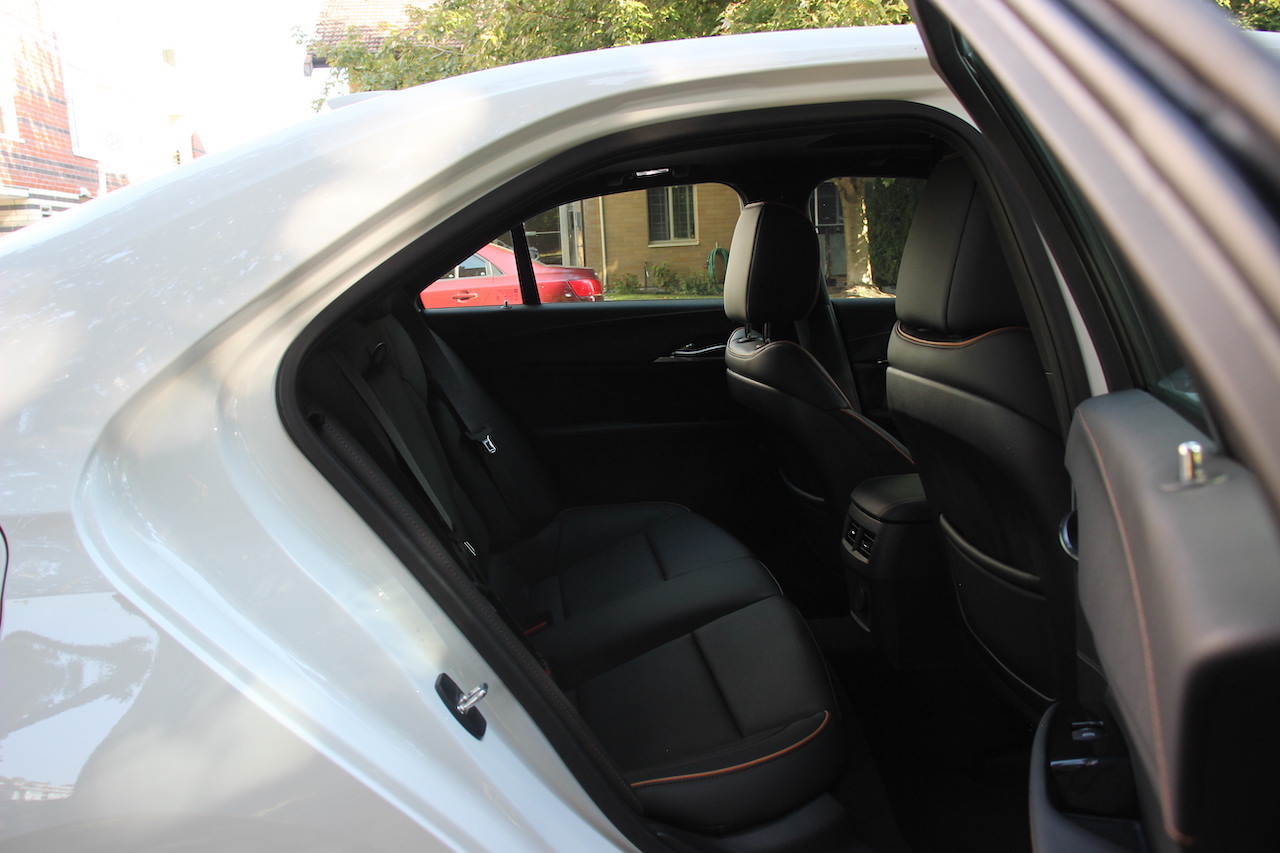 It’s also a stark contrast to the exterior styling, which is great – I love the black 19-inch wheels (a pricey $3,062 option) and vertical headlamp lenses and the silhouette is right on.

I’m also a little unsure about the Cadillac CUE infotainment system. Controls include a touchscreen and two knobs (plus wheel-mounted buttons), but the graphics are tame. At least the menus are easy to navigate, and Apple CarPlay and Android Auto are included. During my time, CarPlay worked flawlessly, which is nice. The back seats, though, are quite snug – which is less nice and feels more subcompact sedan as opposed to compact sedan.

Of course, the back seats in a vehicle like this probably won’t be used all that frequently so it’s hard to knock the CT4-V too much on that front. Especially since otherwise, it’s evident that Cadillac took a serious look at what it takes to make a performance sedan competitive these days and took their shot. It’s not quite a bullseye, but thanks to that engine and razor-sharp handling characteristics, it’s on-target but seems more of a stepping-stone to even hotter Caddies. So, about that Blackwing…