True to its name.

I don’t know how to speak Italian, but that didn’t stop the Alfa Romeo Stelvio from talking to me.

Sporty SUVs are a dime a dozen these days, but few are actually fun to drive and even fewer will entice you to go for a drive for no reason at all.

It’s not like that with the Alfa Romeo Stelvio and it’s also not the least bit surprising from a storied Italian car company that’s been producing automotive icons for over a century. They even named it after one of the greatest driving roads on earth, and after spending time with one, it makes complete sense.

The Stelvio went on sale in 2017, entering the highly competitive compact luxury crossover segment, facing off against well-established rivals like the BMW X3 and Mercedes GLC. Those two are such a common sight on the highways that you’ll probably never notice them. The Alfa, on the other hand, is a bit of a unicorn.

For some, the Alfa’s relative rarity might be the most refreshing thing about it. For others, it might be reason enough to stay away and put their money down on something they’re more familiar with. If you fall into the latter crowd, the Alfa Romeo Stelvio offers a vehicle that has less quirks than most Alfas, and is probably the most livable and practical product they’ve ever produced. But it is still uniquely Italian.

For one, it gets attention, like nothing else in this category ever could. Where most compact crossovers are about as riveting as reading the dictionary, the Alfa, especially when specced with the blacked-out Nero Edizione trim package and bright red leather interior, offers something much more compelling.

There’s also something cool about the Stelvio’s design elements: the shield-like Scudetto grille and twin horizontal side grilles that have appeared on nearly every Alfa Romeo since WWII. The elegant lines are understated and to these eyes, it’s about as pretty as a crossover can get. 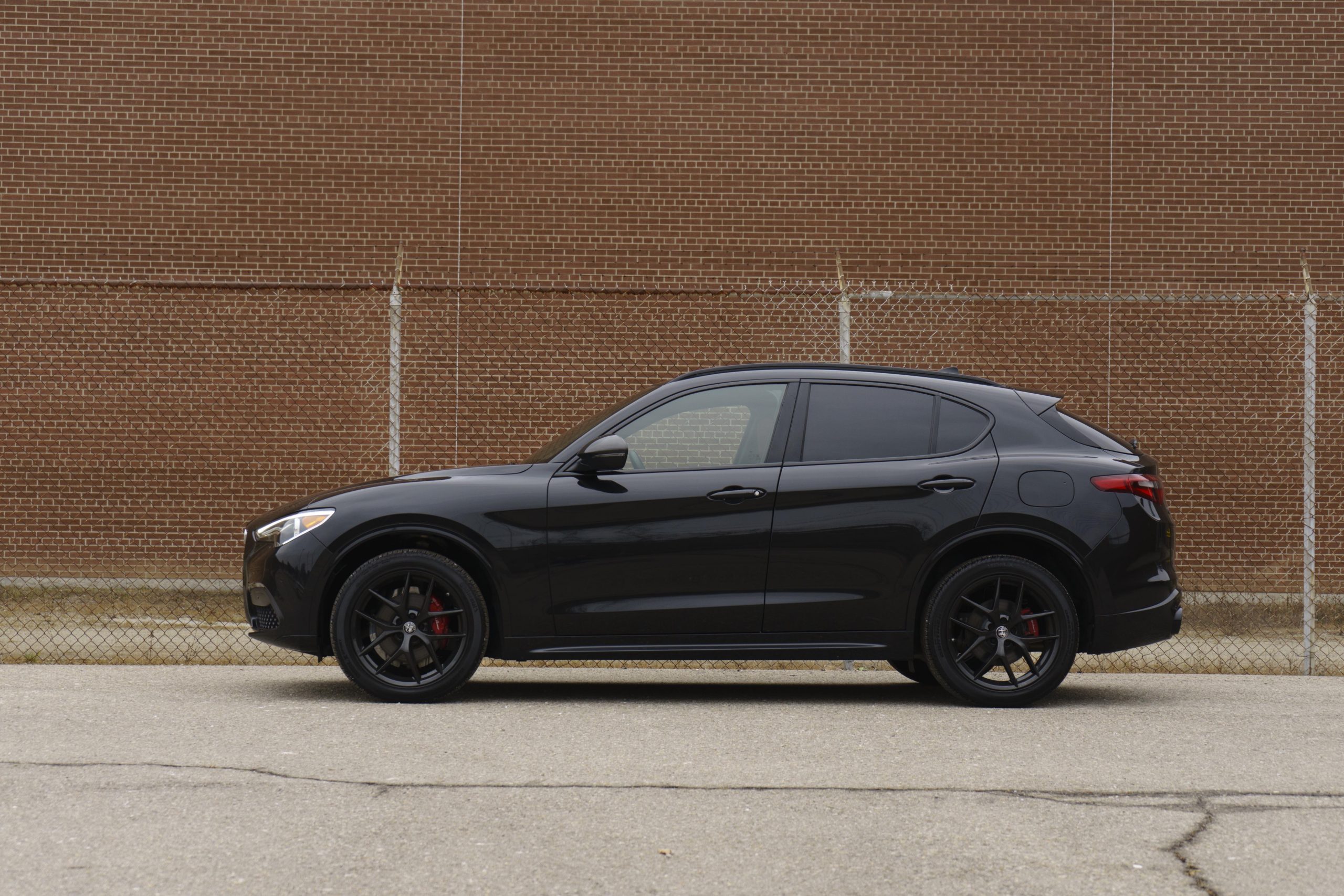 Under the hood, you get a spunky 2-litre turbocharged 4-cylinder that should be about as bland as all the other 4-cylinder turbo motors out there, but it isn’t. It has real character and a throaty exhaust note that isn’t overly loud and obnoxious. With just over 300 lb-ft of torque, the Stelvio moves too, and the 8-speed ZF automatic delivers snappy, read-your-mind type shifts. It also continues to remind me why this series of automatic transmissions found in numerous applications throughout the auto industry should be in the running for the best automatics ever made.

Then there’s the way the Stelvio handles. This isn’t my first go in one. I drove the range-topping Quadrifoglio version a couple of years ago, and I was thoroughly impressed with its balance and poise and the way it could attack a back road. I’m happy to report that outside of the Q’s potent Ferrari derived 6-cylinder, the plebian Stelvio drives every bit as well.

It starts with laser-fast steering that gives it voracious turn-in abilities. Better yet, when you do chuck it into a corner, there is no weirdness, just grip. The rear follows the front without hesitation, and with very little body roll you’ll have to remind yourself that you’re in a crossover and not a full-fledged sports car. 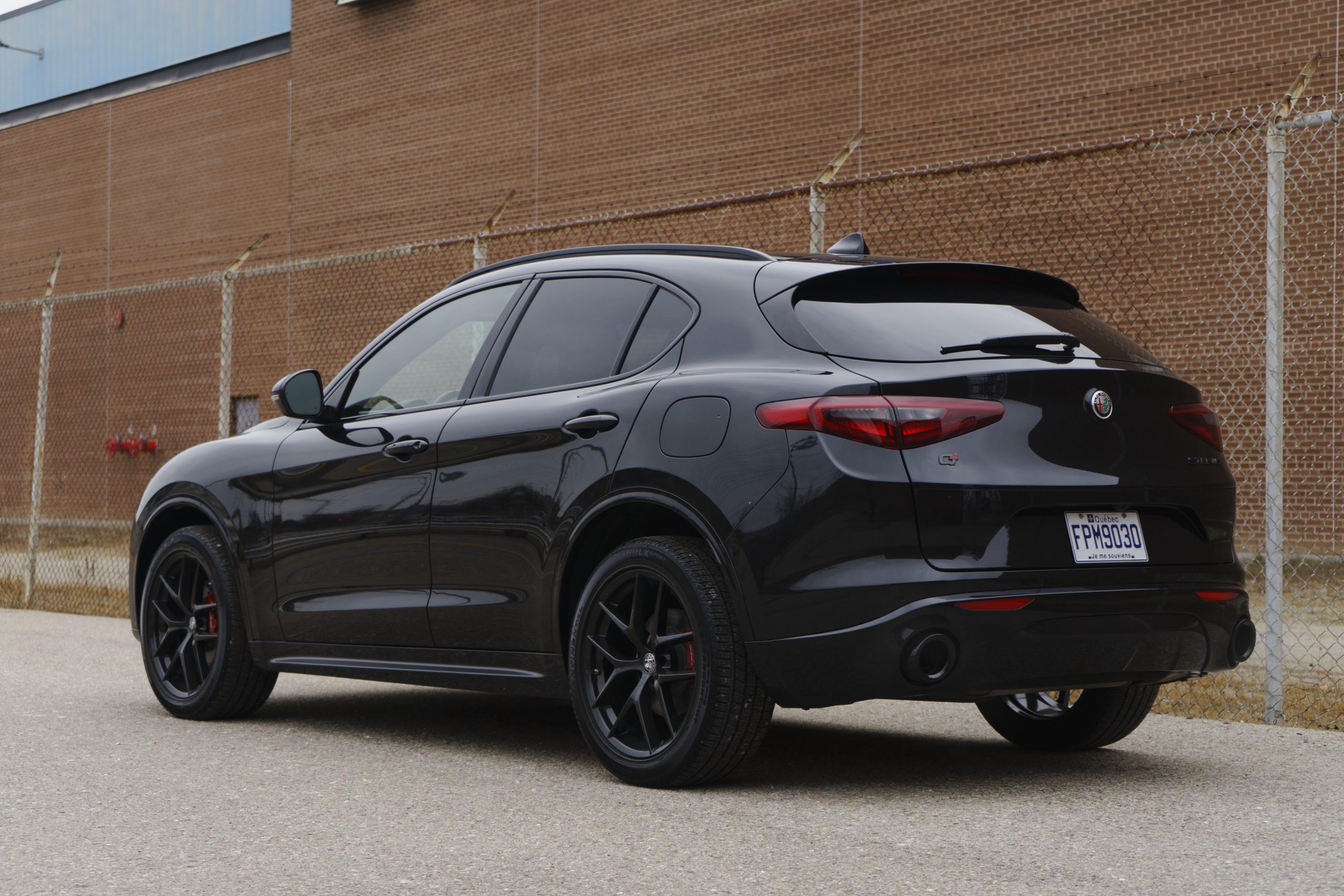 And it’s not just its driving talents that I appreciate. The Stelvio is a practical vehicle, with seating for five and a spacious cargo area with a nice large opening, allowing you to get most of what you need crammed in. Fold down the rear seats and there’s 1600 litres of space, which is a lot. Easily enough for those Ikea shopping sprees or impromptu camping trips.

Build quality was a bit of sore point in the previous Stelvio I was in, but with numerous updates for 2020, this Stelvio felt a hundred times better. From the wrapped and stitched leather dashboard to the materials and plastics, and the superbly comfortable and supportive front buckets, it proved to be the type of vehicle that I enjoyed getting into every day.

They even revamped the infotainment giving it better graphics and a more intuitive menu structure and a nice rotary dial to control it all. Unfortunately, the experience was slow and laggy like they had forgotten to upgrade the processor. Using it was frustrating but ultimately better than what it was. 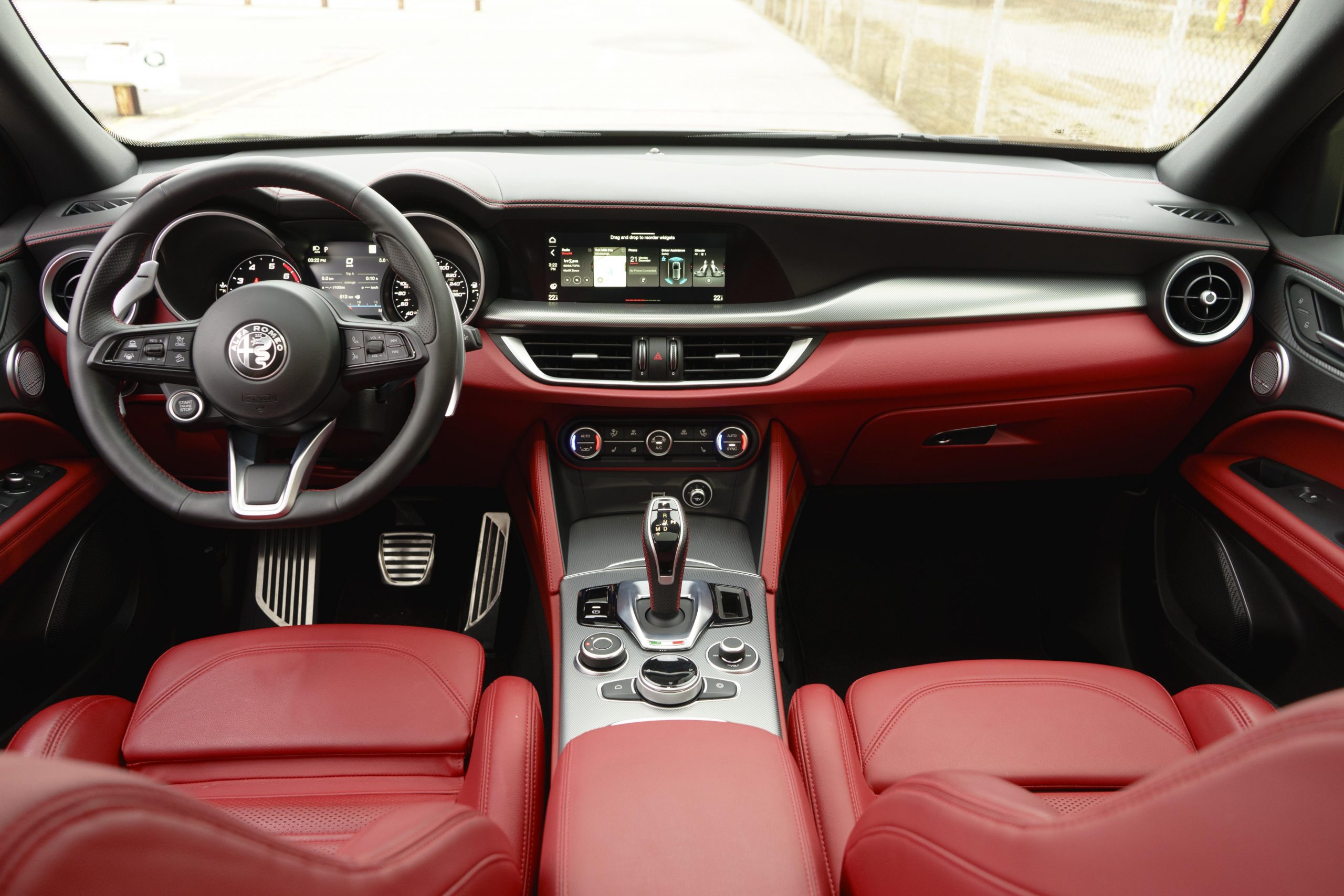 Being different, and driving an Italian automobile will come with its eccentricities, and this Stelvio, like the last one I drove, remain the only two vehicles where I’ve inadvertently set off the alarm. Not once, but multiple times. Each time more jarring than the last. And I still don’t know if I did it by sitting on the keyfob or somehow holding down that button. The Stelvio also remains the only car I’ve driven where the windows have gone down when I wanted them to go up. It could have been a pinch sensor or something but these are things I don’t typically experience with other cars.

None of that made me like it any less, but I only say that from short-term experience.

The Stelvio is priced similarly to rivals but it’s down on power when compared to the boosted sixes in the Germans, and that will work against it. And having to pay nearly a hundred grand for the Quadrifoglio puts its extra power out of reach for many.

I drove a 2020 model for this review, but there are very few differences on the 2021. Alfa has simplified the trim line and there are only four to choose from now, including the Quadrifoglio. There are also some new colours and there has been some repackaging of options making some of the driver assistance technology standard equipment on this Ti. A good move.

I’d probably keep it simple and stick with the colour combo and spec you see on these pages. 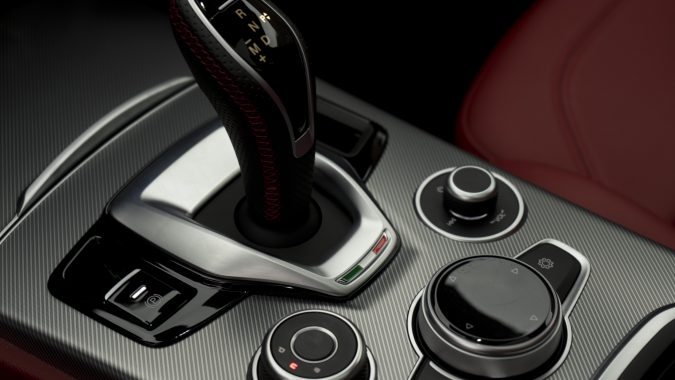 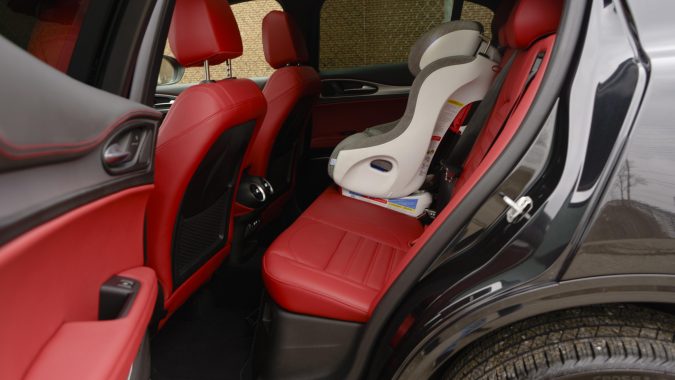 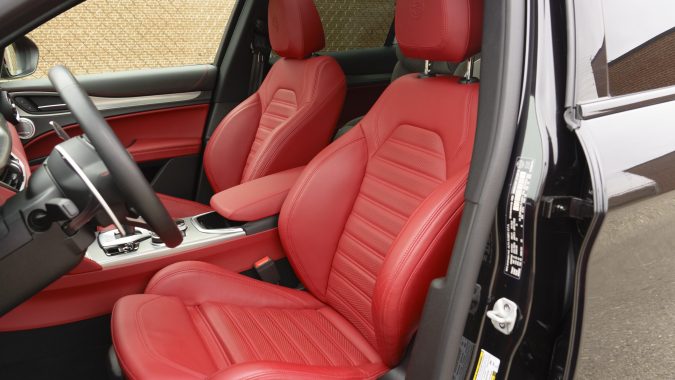 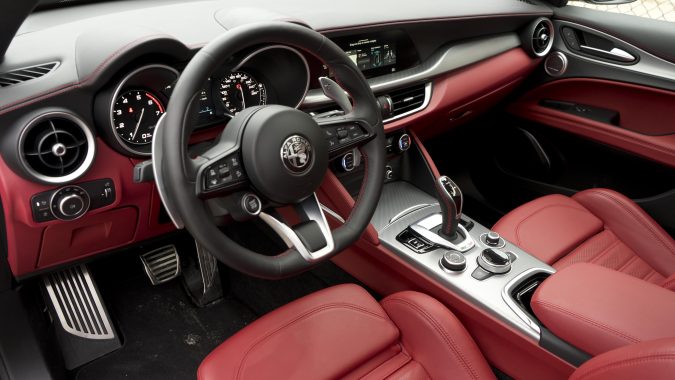 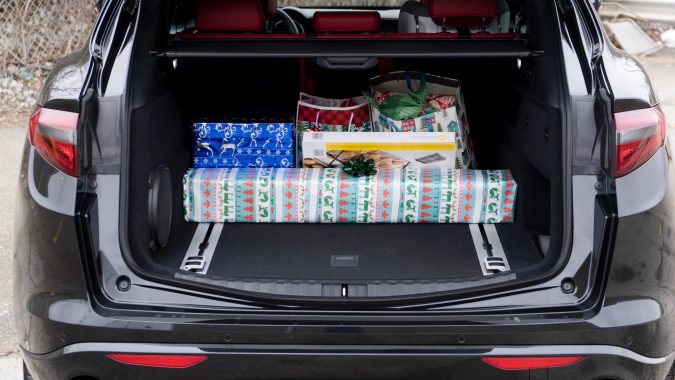 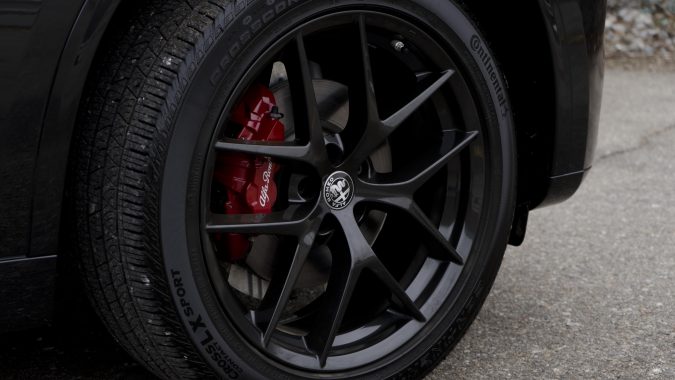 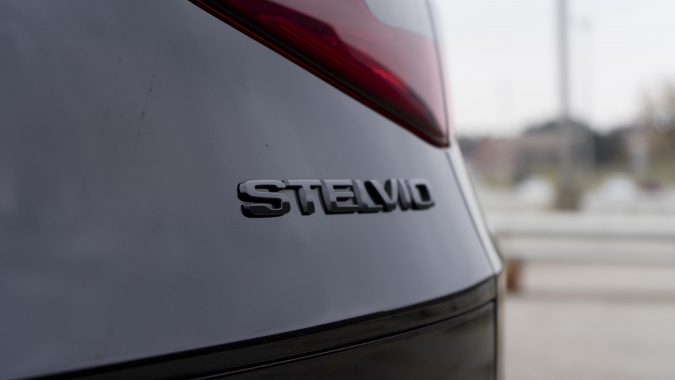 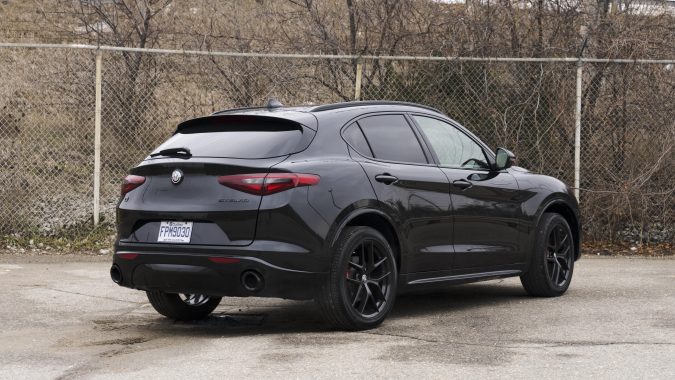 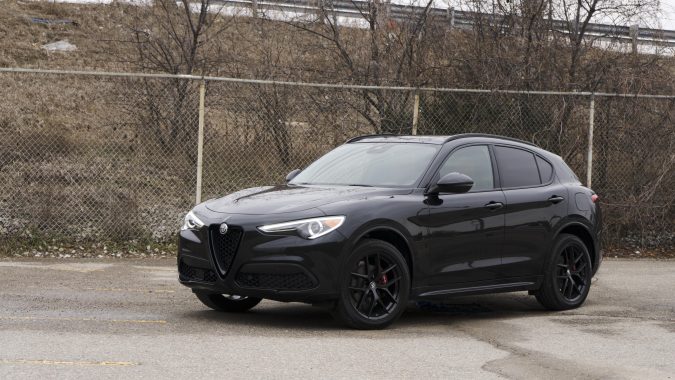