End of the line for the original People’s Car

And for more than 80 years, no nameplate has personified that attitude – a car for the masses – more than the Beetle, a compact coupe whose concept predated that of the company by more than a decade. While Ferdinand Porsche (yes, that Porsche) was the lead engineer for the Beetle that would eventually make it to production, it was Béla Barényi who came up with the original design, along with the first technical drawings in 1925, a dozen years before Volkswagen was founded in 1937.

Rise of the Beetle

Porsche would build the Beetle’s first ancestor, the Type 12, in 1932 and the first production cars were built in 1938 on the eve of the Second World War. These early Beetles were military vehicles for use by officers in the German army, and it wasn’t until after the war in 1947 that Volkswagen began to produce Beetles exclusively for the consumer market.

In the decades that followed, the Beetle would reach iconic status and was heralded as one of the most important and most successful cars ever built. When the last original rear-engine, rear-wheel drive Type 1 Beetle was produced at Volkswagen’s plant in Puebla, Mexico in July 2003, it concluded a remarkable 65-year run with more than 21 million units sold worldwide.

Volkswagen would eventually introduce a modern front-wheel drive successor to the Type 1 built on the Golf Mk IV platform – the New Beetle – in 1998 and followed it up with the current A5 model in 2011.

End of the line

But after 81 years of producing a Beetle of some description, the ‘Bug’ is no more. The final A5 units rolled of the assembly line in Puebla in mid-July.

So why is the Beetle being discontinued? There are a few main factors. Firstly, global sales have been declining in recent years to the point that Volkswagen stopped selling it in Germany last year, and just 14,411 units were sold in the U.S. in 2018, which was the lowest total since the A5 first went on sale in 2011.

As is the case with other cars, the rise of the compact and mid-size SUV has cut into the Beetle’s popularity and, when combined with the fact that it’s built on an old platform (PQ35) that Volkswagen has replaced (with MQB), and is taking up production space in Puebla that the company would rather reallocate, its fate was sealed.

An interesting by-product of the Beetle’s discontinuation, however, is the boost it has given to sales in Canada. Through July 31, year-over-year Beetle sales are up 54 percent (2,121 units) and supply remains plentiful. At its current sales rate, Volkswagen Canada expects to have enough cars to sustain Beetle sales for a few more months but interested parties should probably visit their local dealers soon. 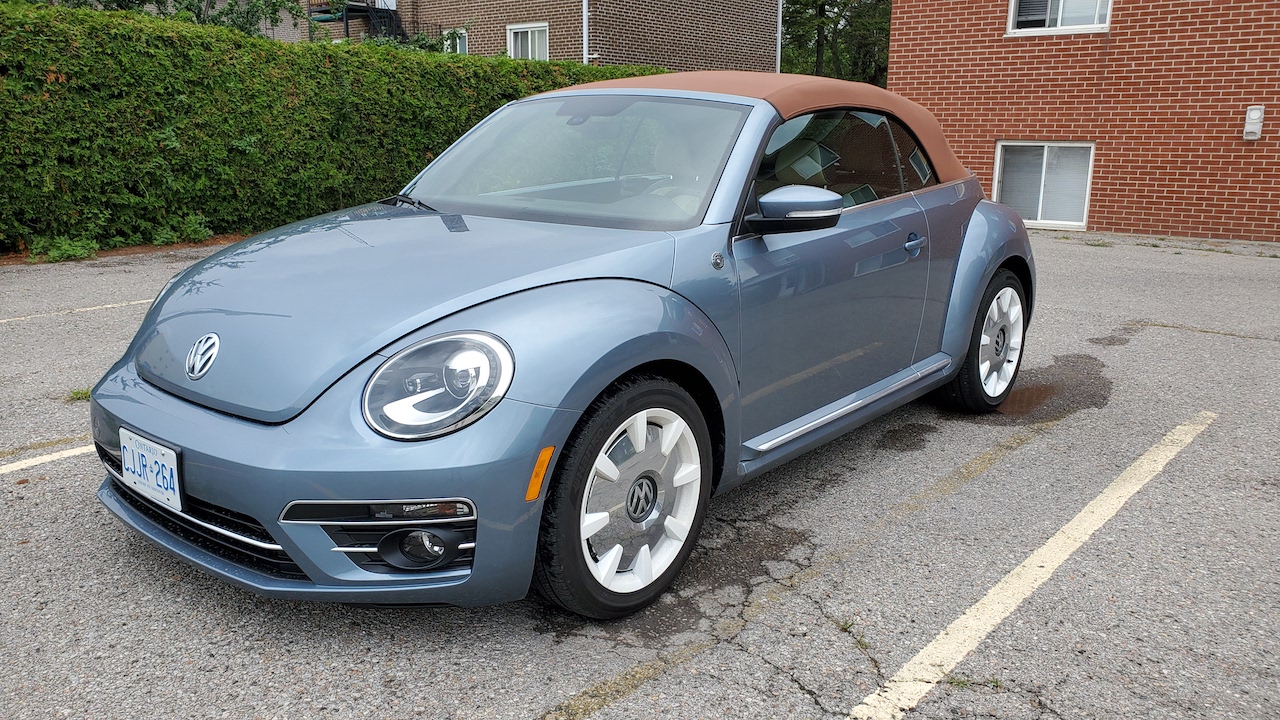 Volkswagen has streamlined the Beetle lineup for 2019, with the range consisting of the Wolfsburg Edition, along with the carry-over Dune. Both are available in coupe and convertible, and all are powered by a 2.0-litre TSI turbocharged 4-cylinder engine (174 hp / 184 lb-ft.) paired with a 6-speed automatic that drives the front wheels. 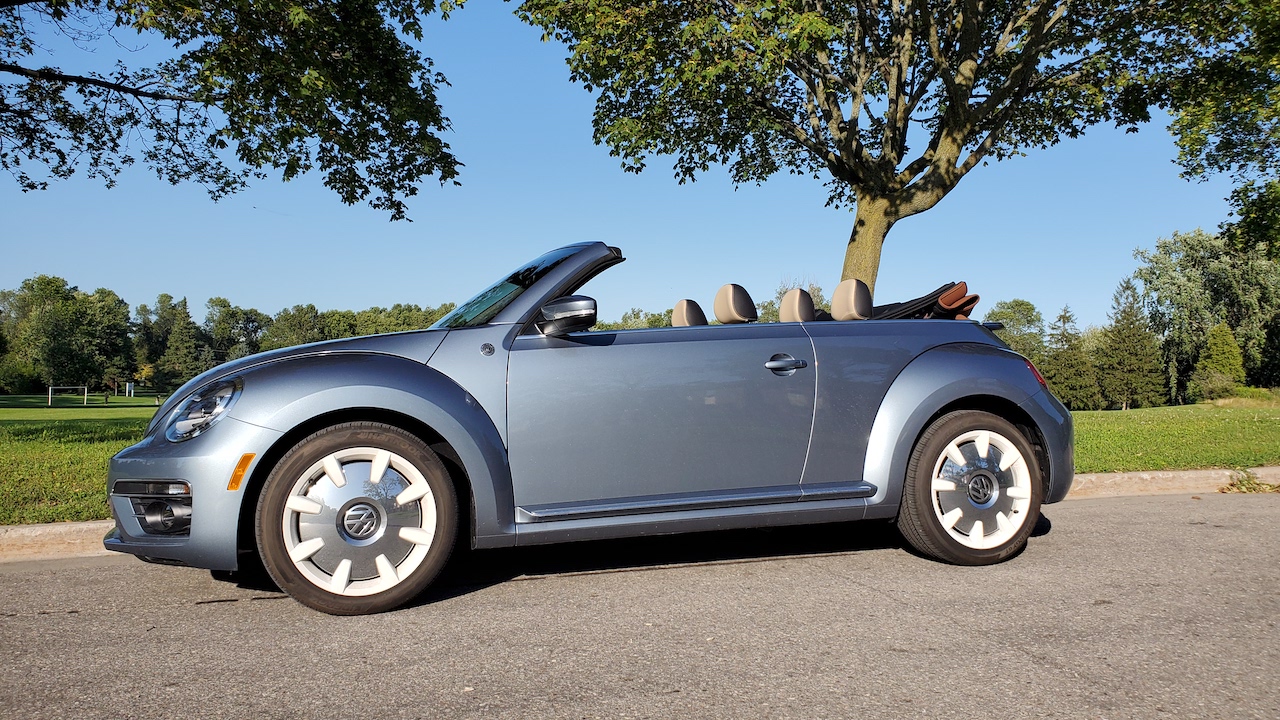 For the purposes of this review, Volkswagen Canada set me up with a Stonewashed Blue Wolfsburg Edition convertible with a Sioux Brown roof and a Pepper Beige diamond-stitched leather interior. The only option present is the style package ($1,750) that adds leather seating, fog lights, bi-xenon headlights, LED taillights, LED daytime running lights and 18-inch alloy disc wheels, among other features.

The adage ‘a picture is worth a thousand words’ really fits with this car. Immediately recognizable, the Beetle is one of the very few cars I’ve driven that doesn’t look like anything else on the road. Whether it’s a Type 1, or a New Beetle or an A5 Wolfsburg convertible like my tester, just about everyone knows the Beetle.

Few automotive nameplates are more recognizable to the average person, whether they know anything about cars or not, than the Beetle. Tell anyone you’re driving one and without even mentioning Volkswagen, invariably they know what you’re talking about. That is a true measure of iconic status. 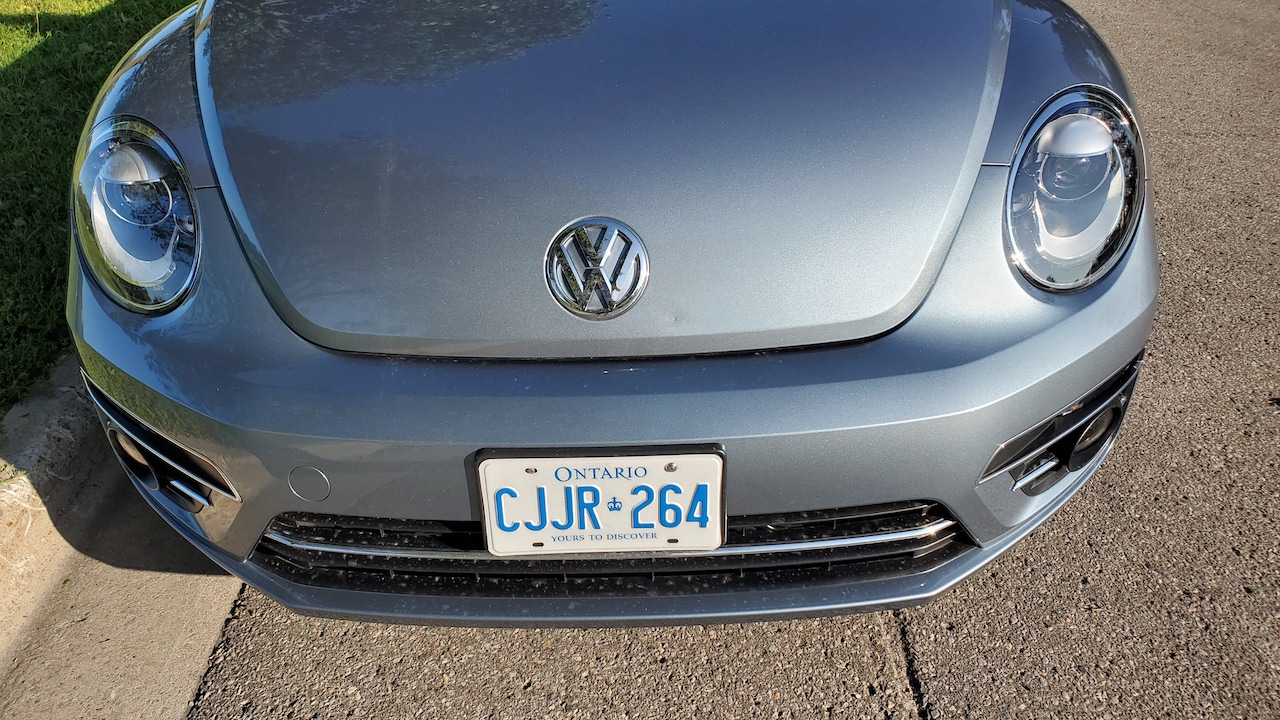 And Volkswagen designers have done a fine job of keeping the Beetle’s quirks intact. The bug-eye headlights are LEDs now, but they’re stilly buggy. The front and rear fenders are as big and bulbous as ever, but they fit perfectly with the car’s character. The disc wheels are two-tone because, of course they are, but once again, they fit the design ethic of a car that is both new and very old at the same time.

Inside, the Beetle’s age is beginning to show with a small infotainment screen with no navigation (Apple CarPlay, Android Auto and MirrorLink are standard), an analogue instrument cluster that feels last gen and a dash that contains a lot of hard plastic.

The thing is, though, these faults don’t rankle much because they work as part of the Beetle’s overall charm. The dashboard has colour-keyed inserts that match the seats, the round-face analogue gauges fit the Beetle’s character, and most of us have smartphones if we really need to display a map on the car’s touchscreen. 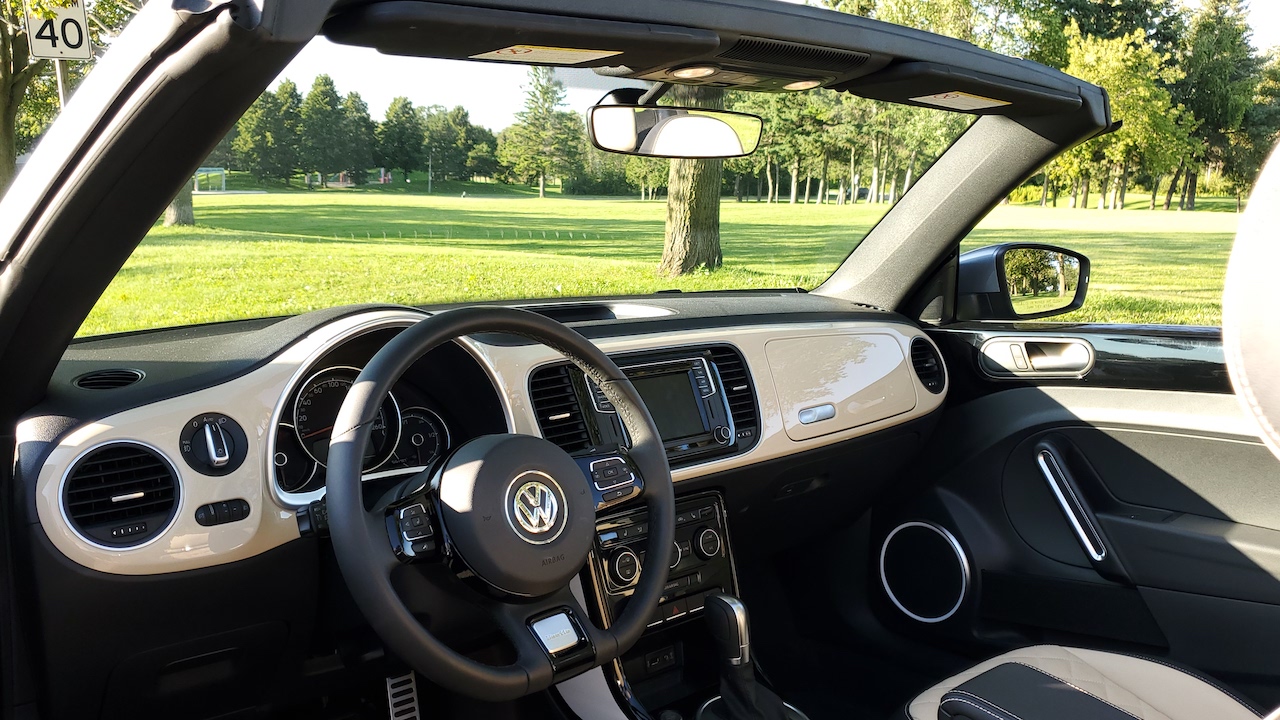 My tester looks great in Stonewashed Blue, the power Sioux Brown droptop roof works great and the diamond-stitched leather seating are incredibly comfortable. I can’t think of a car that exudes more natural charm than the Beetle. Not liking it is almost impossible.

The Beetle is not a performance car in any way, shape or form, and expectations should be adjusted accordingly. Yeah, it has a 2.0-litre TSI turbo four, but it’s not tuned for performance at all. It’ll hustle the Beetle along just fine, but peak power output is modest (174 hp) and is socked high enough in the rev range that most owners won’t experience it. Peak torque (184 lb-ft.) comes in at just 1,500 rpm however, so there is plenty of grunt to get moving from rest. 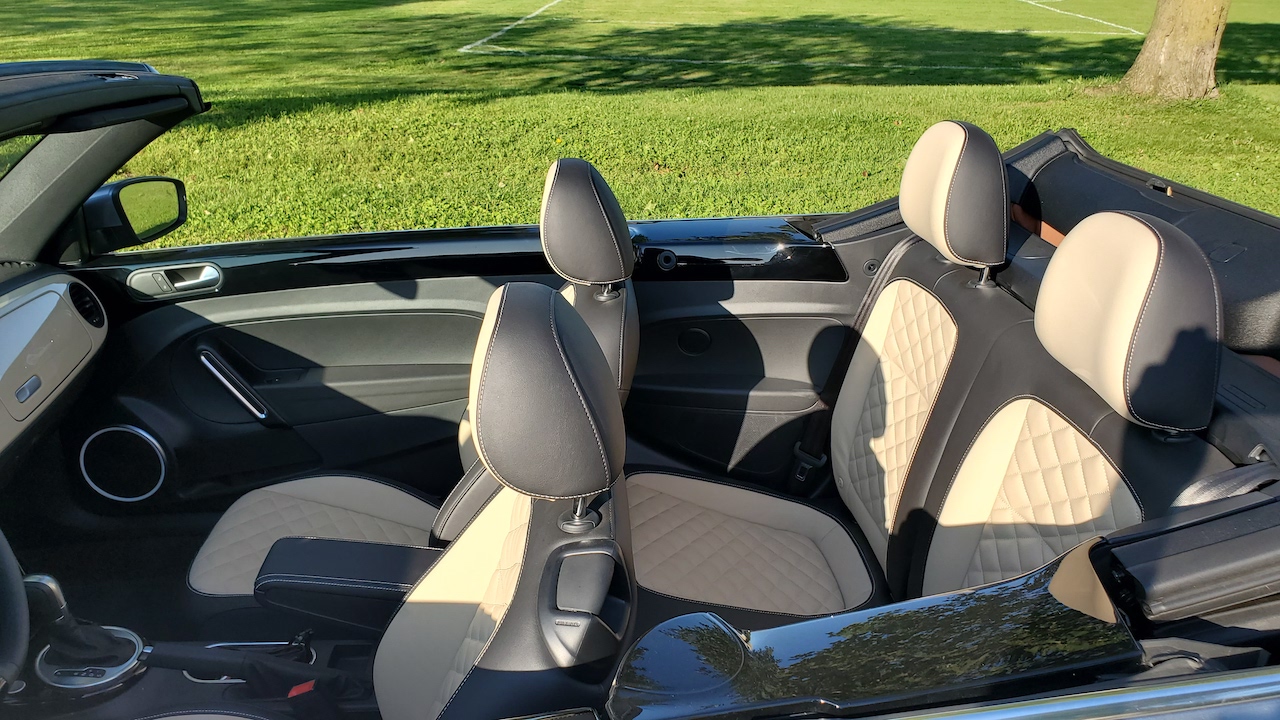 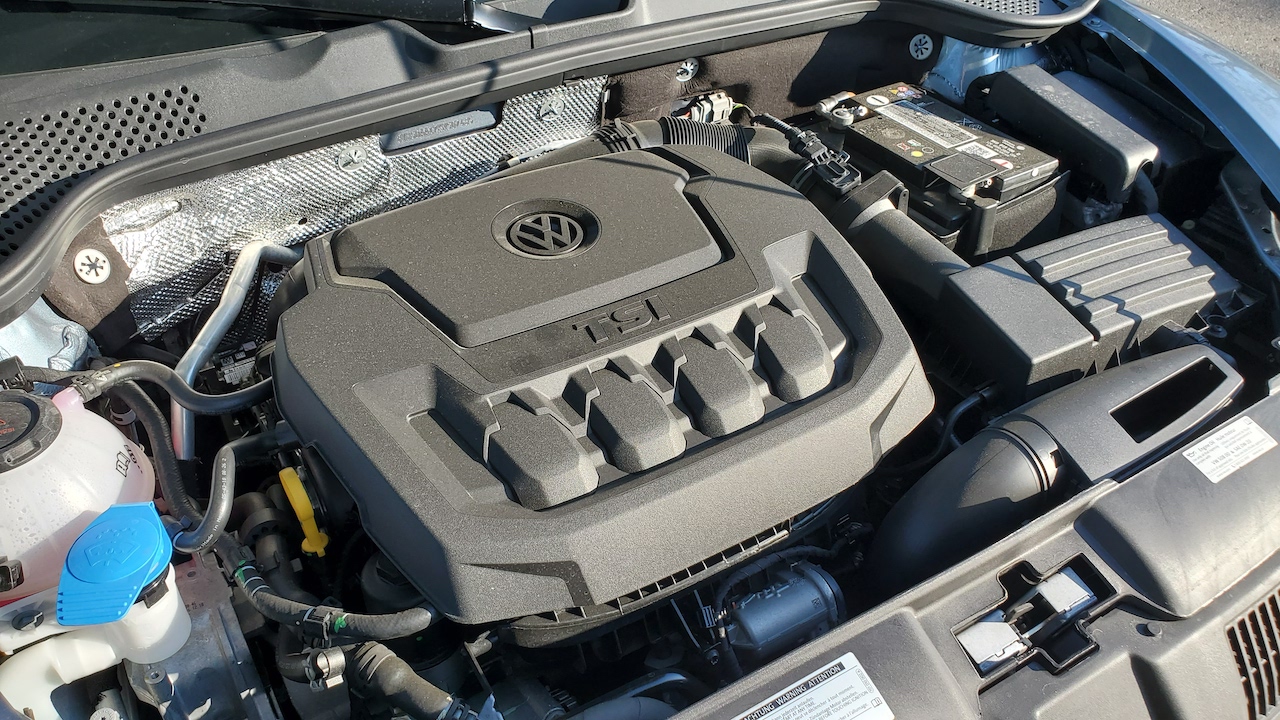 The 6-speed autobox works fine, but it can become somewhat annoying to have to mash the throttle constantly to get it to gear down going up hills or passing slower traffic. This transmission wants to keep engine revs below 2,000 rpm at almost all times, and while that’s fine for highway cruising it’s a bit aggravating in city traffic. Sport and manual modes alleviate the situation somewhat, but what’s really needed here is a manual transmission. Sadly, there isn’t one available.

Overall, the Beetle’s driving character won’t exactly set your pulse racing, but that’s not the point here. Despite my grumbling about the transmission, and the car’s other drawbacks (i.e. small trunk), I had fun driving the Beetle, especially with the top down. As a summer cruiser, it’s one of the best.

The Beetle is Volkswagen in so many ways. A company rep described its inception as a ‘ground zero’ moment that would pave the way for the Karmann Ghias, Buses and, eventually, Passats, Jettas and Golfs that would follow. Quite simply, there is no Volkswagen without the Beetle. Everything can be traced back to that one car.

The impact its departure will have is difficult to predict. Volkswagen is firmly committed to an electric future globally and an expanded SUV lineup in North America. The current Beetle fits into neither category and that as much as declining sales and an aging platform spelled its doom. 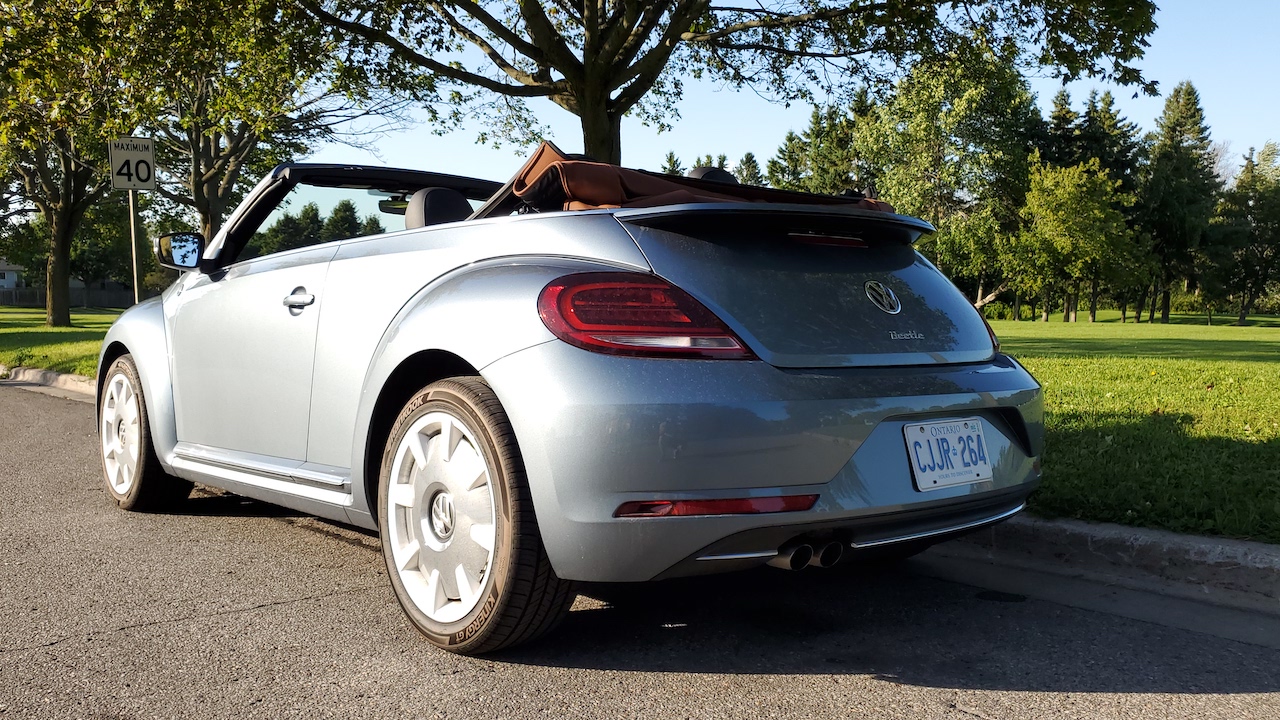 While the decision was doubtless the right one given current market trends and Volkswagen’s long-range plans, the end of the Beetle is the end of an era for the company. Carmakers are constantly searching for something that will give their brand a distinct identity, a model that could, in time become iconic.

The Beetle was that one thing for Volkswagen, a car whose charm never faded over its eight-plus decade run. Discontinuing it is one thing, replacing the void its passing will leave in the company’s soul is quite another. 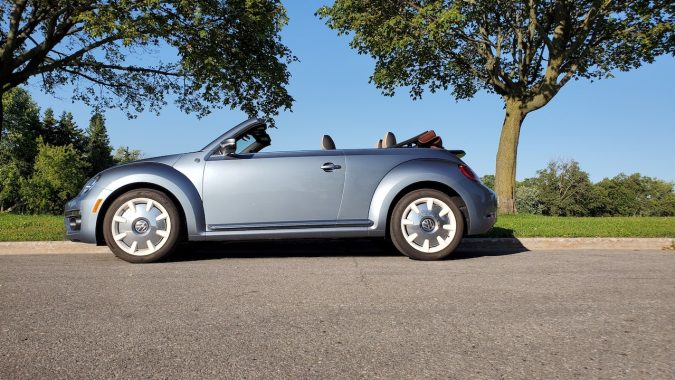 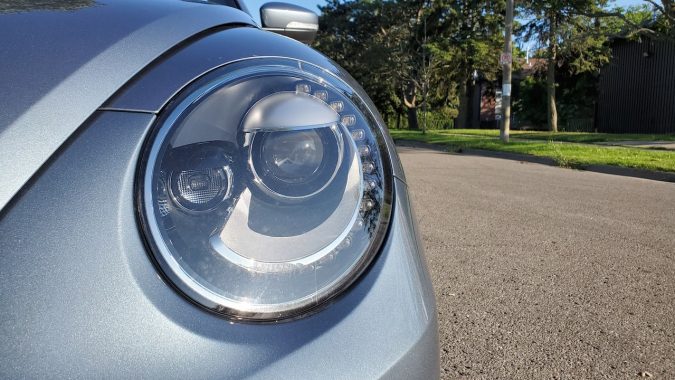 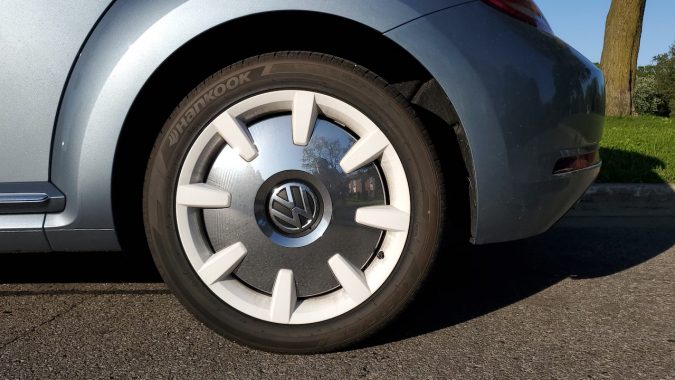 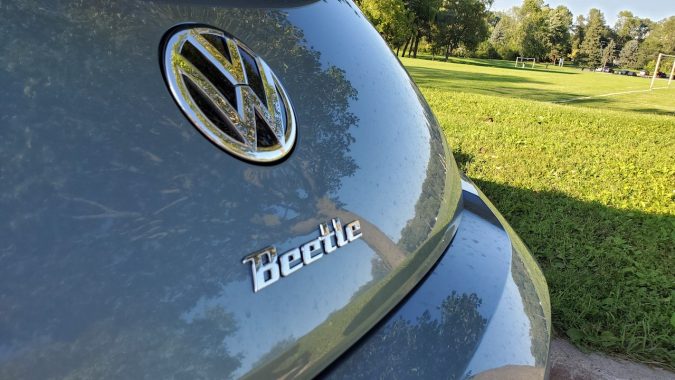 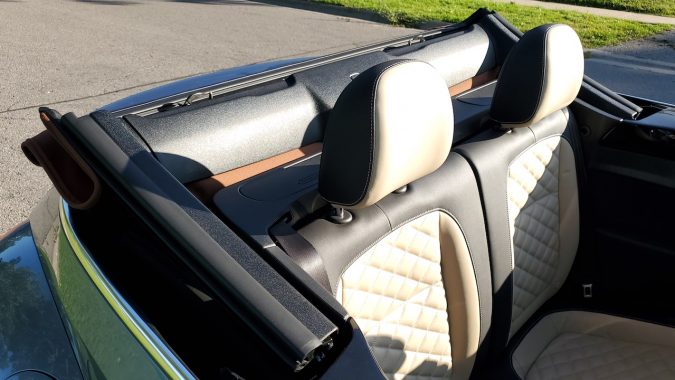 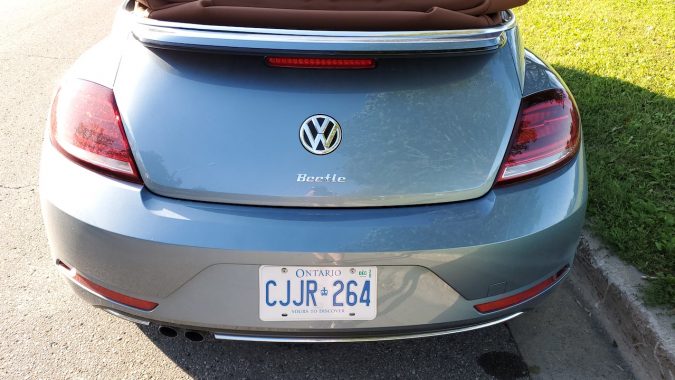 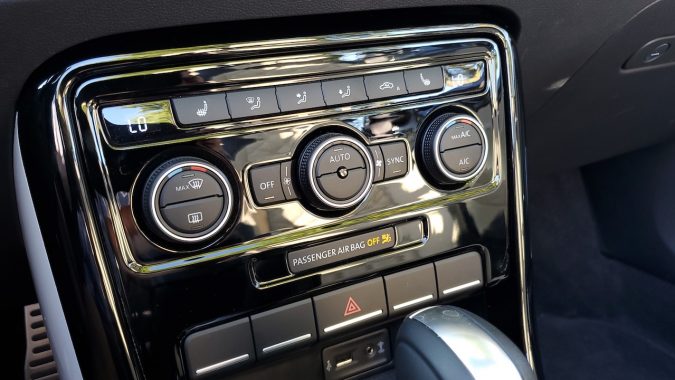 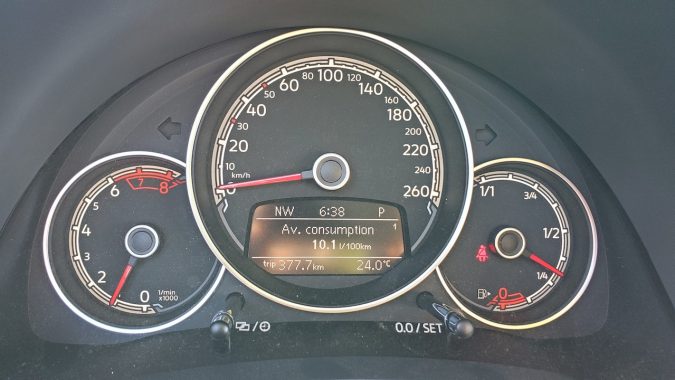 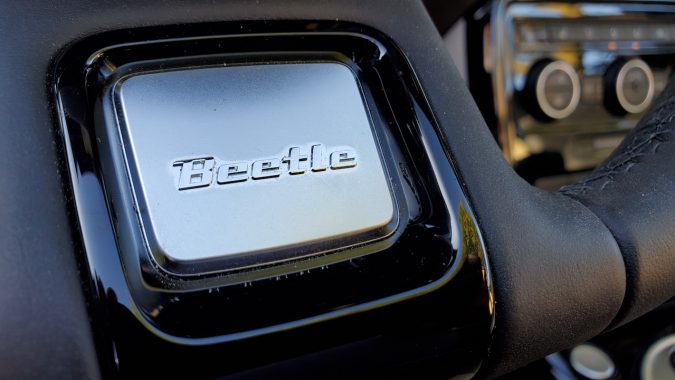 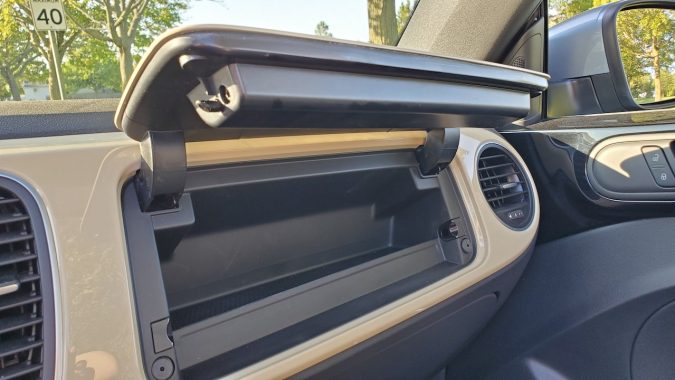 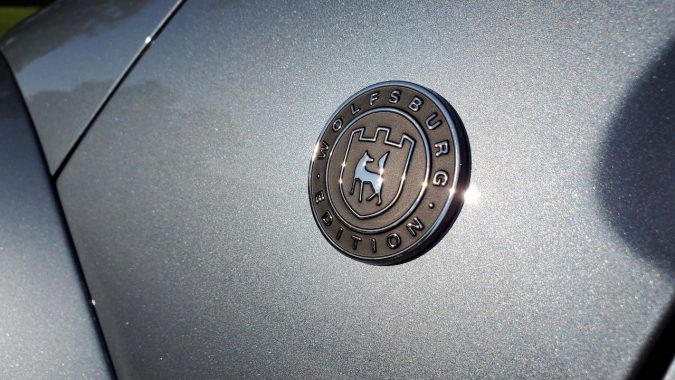 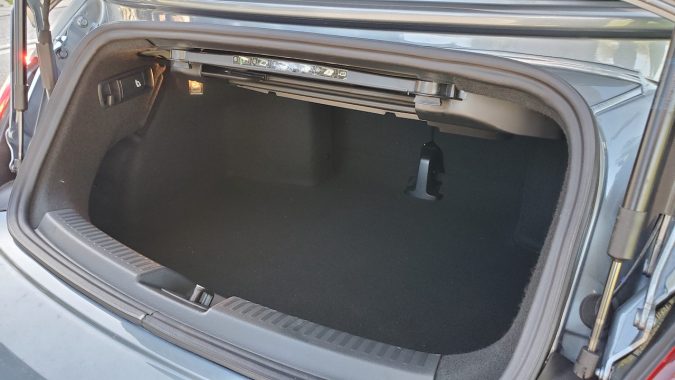