Suddenly, it’s ok to be egotistical

Cars like the 2020 Rolls-Royce Wraith are hard to review. After all, you’re only targeting a small chunk of the population. Also, does a Rolls-Royce buyer even search for online car buying advice? Probably not.

But since we have a job to do, we need to cover all vehicles in the automotive landscape. And this $400,000 dollar hyper luxury coupe just so happens to be part of it.

The Rolls-Royce Wraith is a very expensive, very comfortable and very powerful two-door land yacht engineered for those who simply don’t want to share. These people most probably work very hard and deserve a calm, relaxed ride, isolated from the rest of the world. And contrary to the presidential Ghost sedan from which it shares its underpinnings, the Wraith actually wants you to drive it. Believe it or not, this is the brand’s sports car.

It rides on a shortened version of the Ghost’s wheelbase, with reworked suspension and steering to give it slightly sportier driving dynamics. It’s also 65 pounds (29 kg) lighter than its sedan counterpart. While not significant on paper, it’s enough to give the car a fair bit of athleticism, at least, compared to the gargantuan limousine it’s based on. 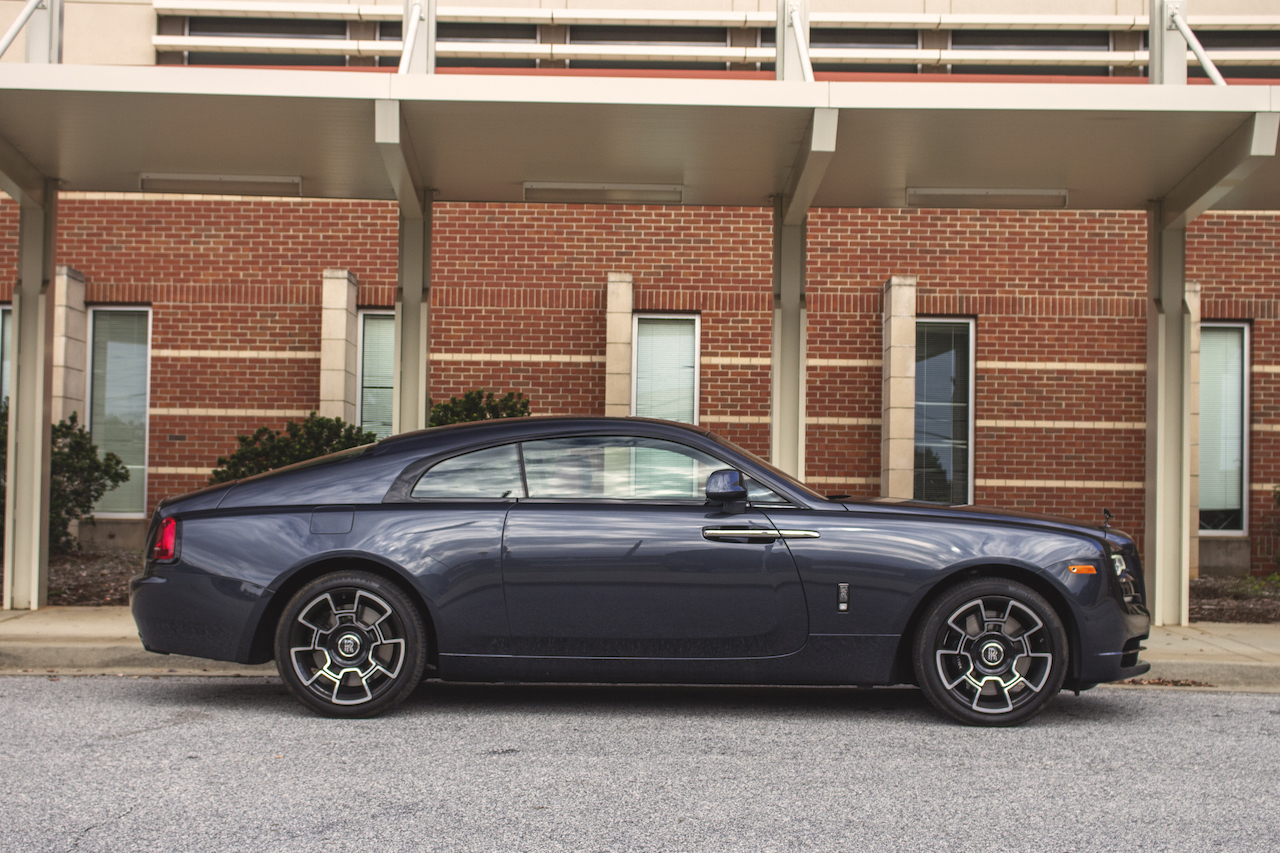 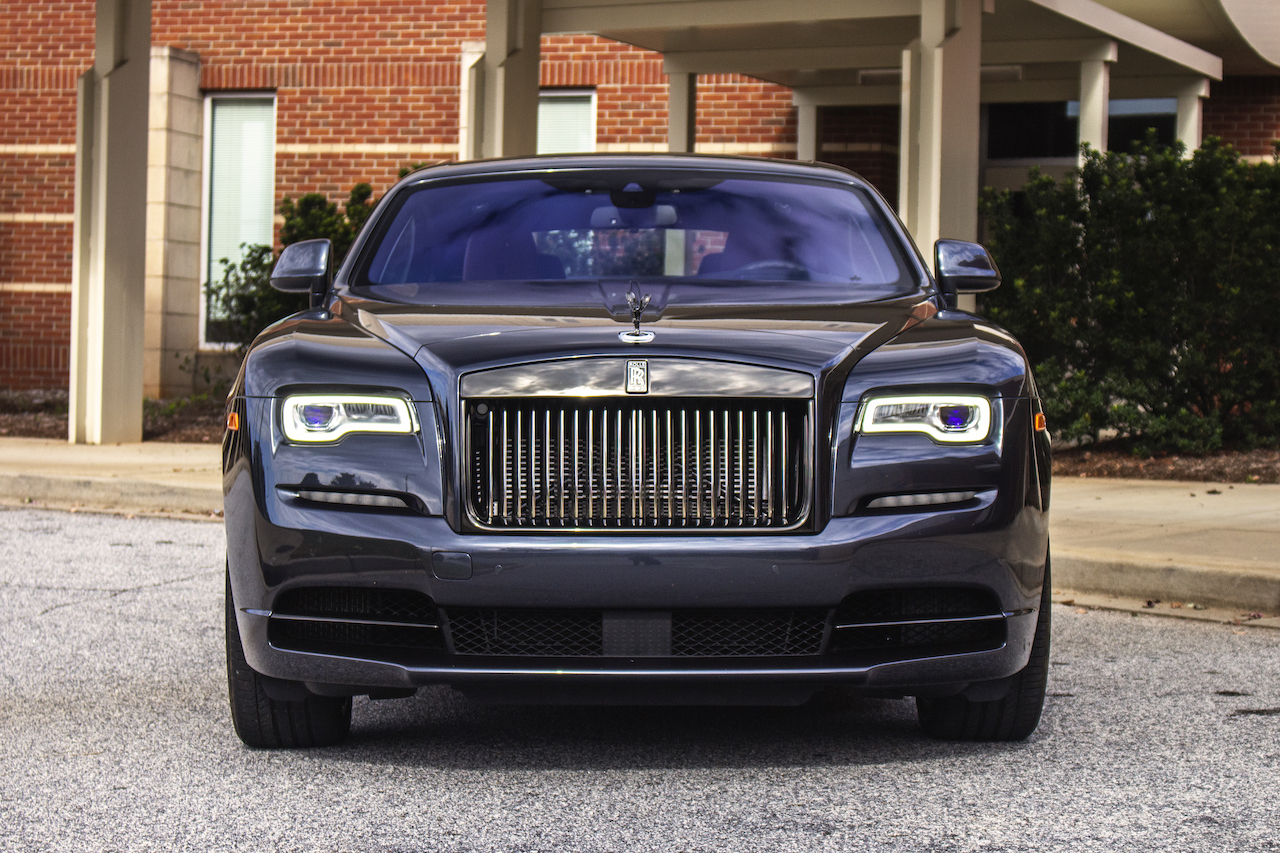 Power is motivated by Rolls-Royce’s ubiquitous 6.6-liter twin-turbo V12 (if you can call a twin-turbo V12 ubiquitous), except power climbs to 624 horsepower versus 563. Torque remains identical at 605 lb-ft, with everything mated to an eight-speed automatic gearbox. All-wheel-drive is obviously standard.

The car you see here is a Black Badge edition, a – wait for it – $48,000 optional package that gives this Roller a sinister dark chrome look. Even the iconic Spirit of Ecstasy gets dipped in the stuff. The Black Badge package also adds 21-inch carbon alloy composite wheels, a sports exhaust, unique cabin color combinations – like our tester’s red on black leather –, and, of course, lambswool floor mats. That’s just the tip of the option list iceberg. The total retail price for the car you see here is $433,625, or the price of a very nice house.

Our driving time in this opulent coupe happened during the BMW Test Fest East event, in Spartanburg South Carolina, where BMW allowed us to drive its entire lineup. Inevitably, this also included Rolls-Royce, which now lives under the Bavarian umbrella. 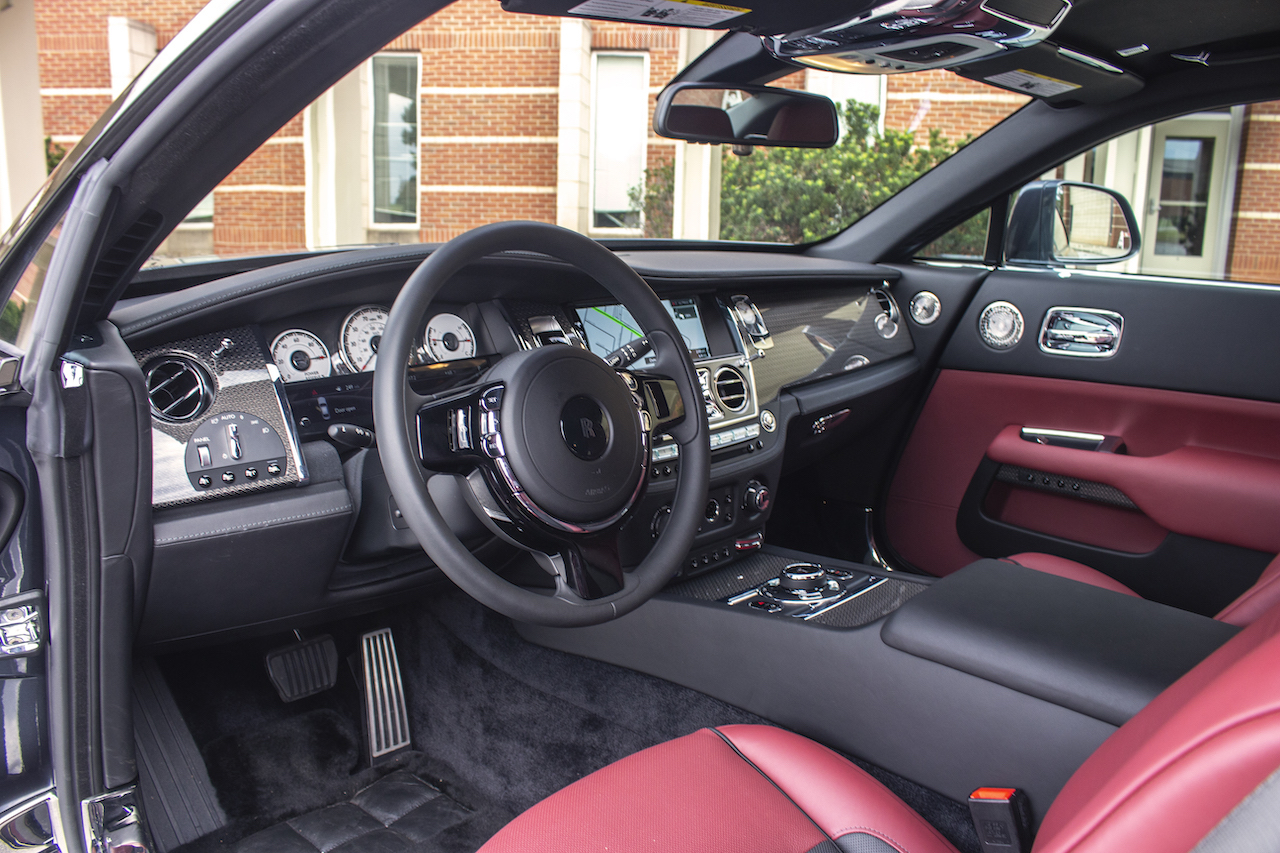 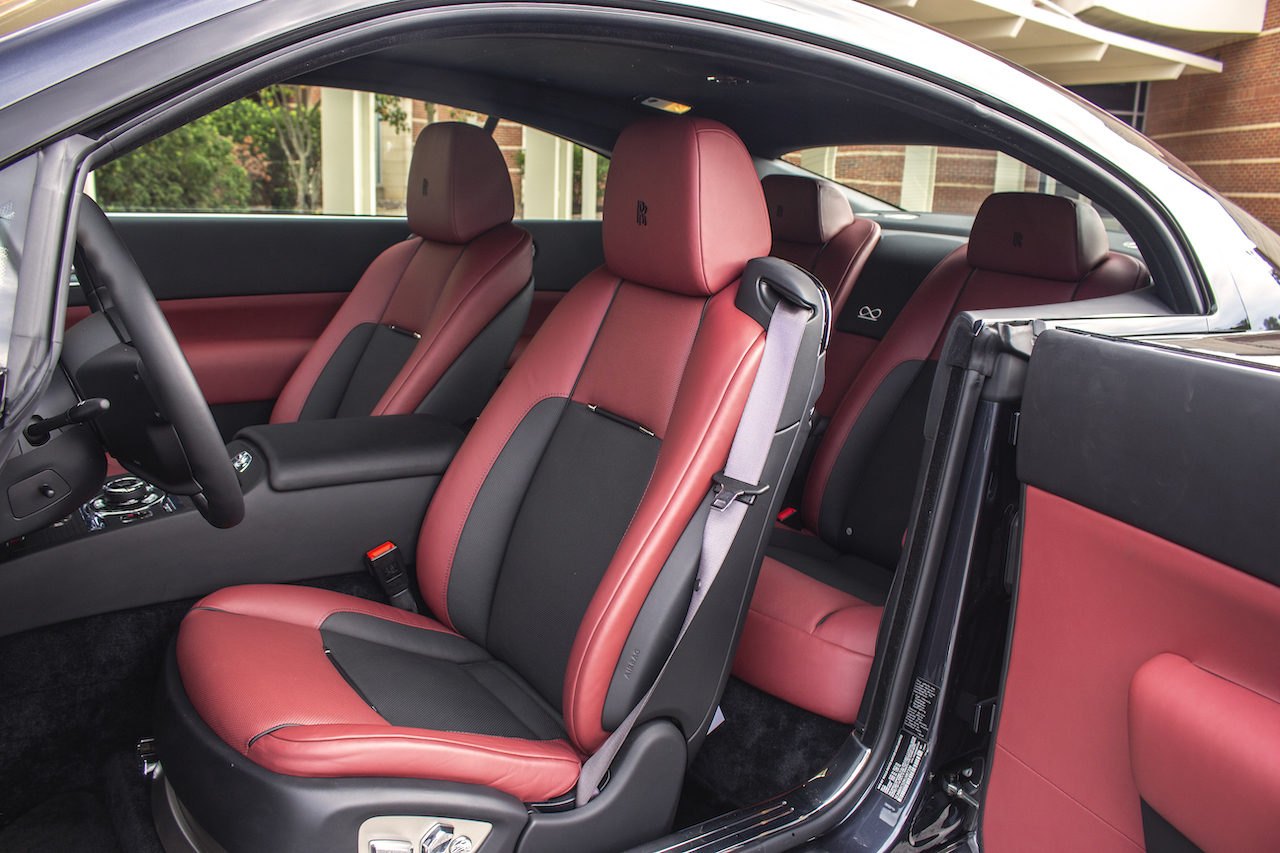 Everything about a Wraith screams look at me, from its imposing stance, long body, dominant grille and sloping roof. It’s definitely a striking car, appearing like nothing else on the road. You’d never guess it shares its architecture with a BMW 7 Series. Then, there’s the way you climb into the thing. No standard doors here, but a graceful presentation of reverse-opening suicide doors, which you close not by pulling on a handle, but by the simple touch of a button. That’s how luxurious a Rolls-Royce is.

The Wraith’s cabin is just as majestic as its exterior, if not more so. Thick and sumptuous leather thrones take care of holding you firmly in place, while switchgear, bezels and stalks are solid pieces of aluminum. There’s no plastic in here, just expensive materials, and the floor mats are so plush; you could very well drive the damn thing barefoot.

Once out there on the road, the one word that best describes how the Wraith drives is smooth. This car doesn’t drive over road imperfections, it glides, feeling like a magic carpet as it hustles forward with ease. Power deliver from the V12 is butter silky, with a solid, constant urge of power that allows this 2,440 kg behemoth to sprint to 100 km/h from a standstill in a solid four seconds flat. Yes, you read that right: four seconds. 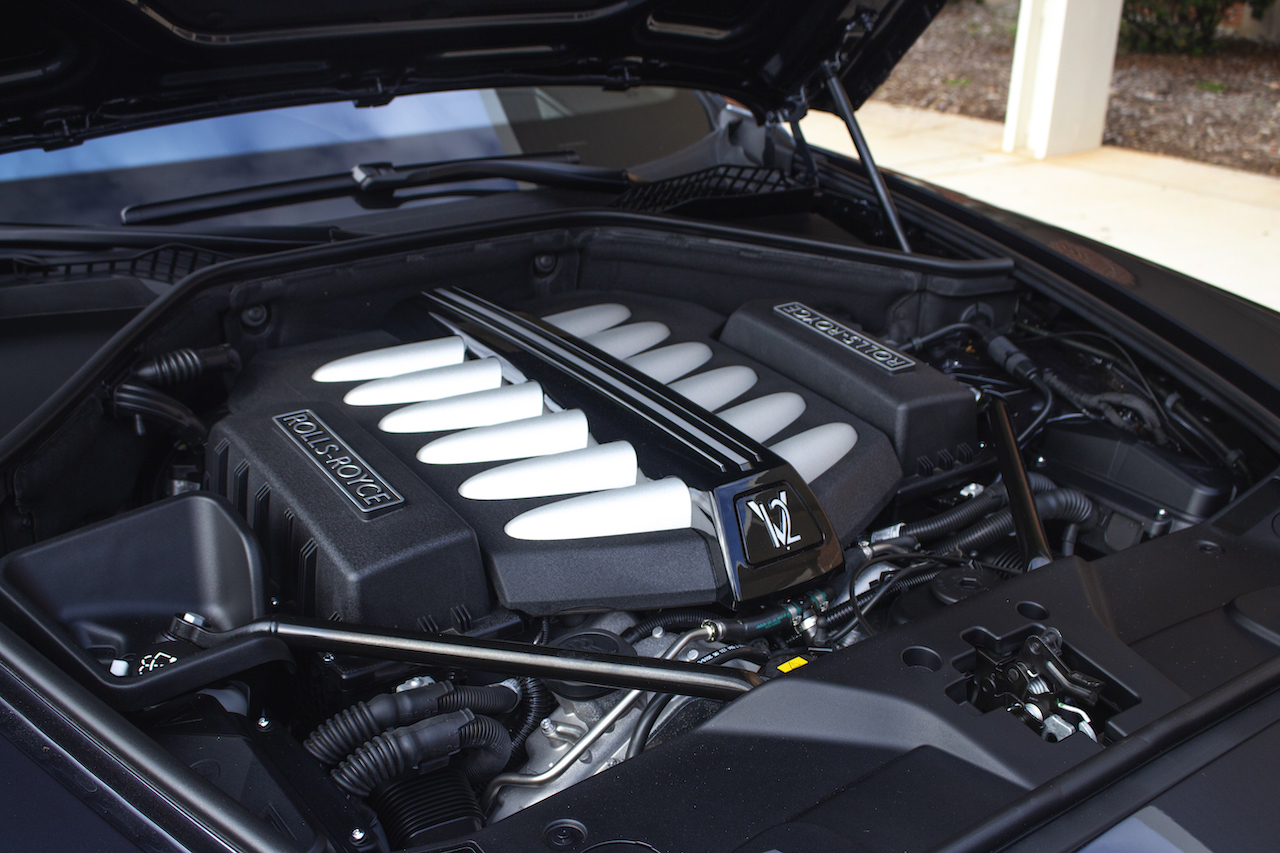 While quick, the Wraith never feels that way behind the wheel. There’s no Sport mode or farting exhaust to remind you you’re driving a car with more than 600 horsepower. Instead, the Wraith adapts to your driving habits. The more you floor the throttle, its transmission adapts, speeding up its operation and handing you lower gears with more urgency. Feather the throttle, and it all becomes lazy and calm.

We were expecting the Wraith to handle like a BC Ferry in the bends, but it actually exhibited rather solid performance. Yes, it feels heavy and large, but its chassis responds astonishingly well to steering inputs, with a solid, composed balance over undulating road surfaces. The air suspension certainly helps, and the lightly weighted steering makes driving the thing fast an easy, stress-free task.

It’s hard to look at other drivers when you’re sitting at an intersection in a $400,000 two-door coupe. People easily judge you for being an egotistical rich snob who preferred spending his hard-earned money on his personal comfort rather than the well-being of others. While the Wraith does have a set of rear seats, they’re not exactly the place of choice for carrying a pair of business partners out to dinner. This car is for the driver, and perhaps a passenger. Nobody else. 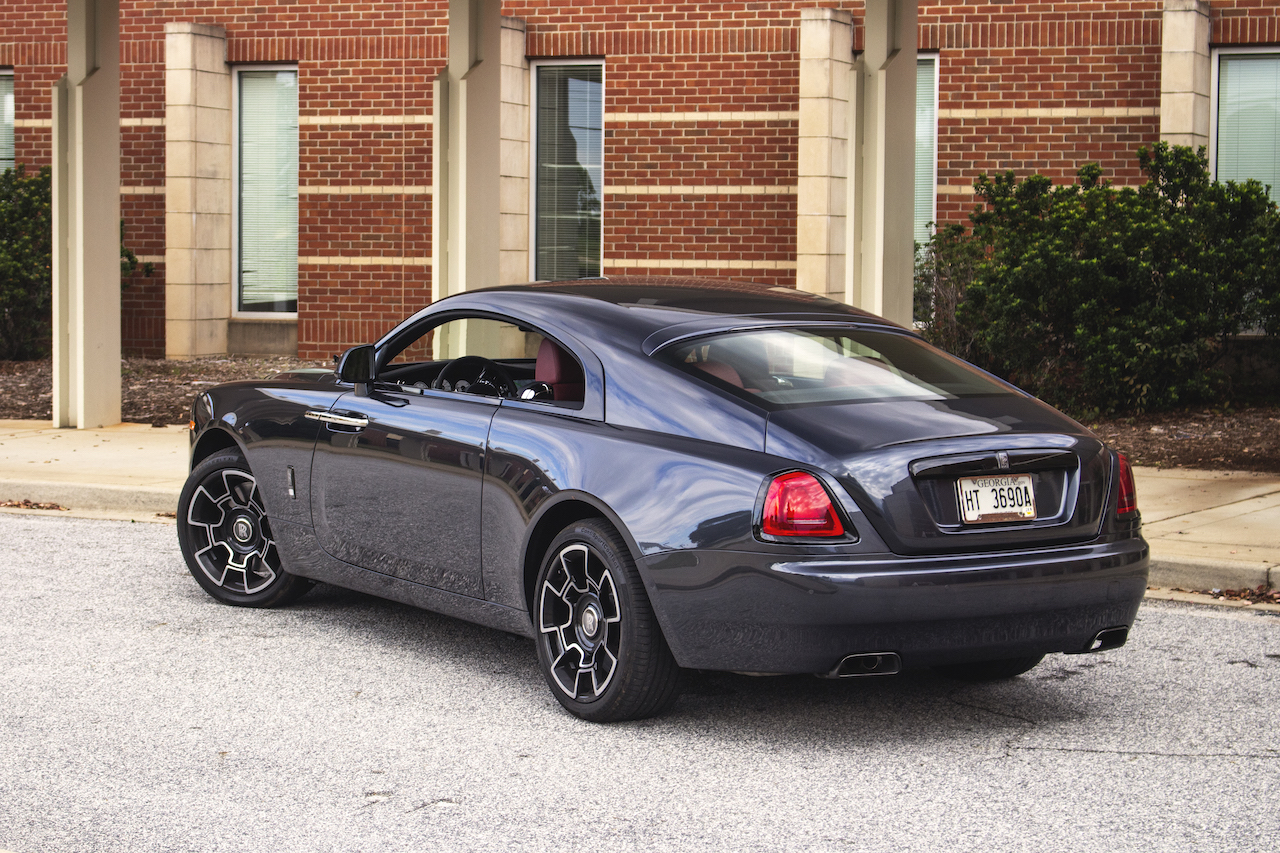 The 2019 Rolls-Royce Wraith isn’t a car you recommend over another, nor one the typical buyer will even shop around for. It’s not even a vehicle we consider to be consumer-oriented, which is why mentioning usual car review metrics like cargo space and fuel economy is irrelevant. We will say this, though: it’s a gas hog, steadily returning a 15L/100 km consumption average. And we still don’t understand why a vehicle that knocks on the door of the half-million mark still doesn’t come with Android Auto.

Simply put, the Wraith is for those who deserve it, period. Because, after all, nothing says “I made it” like a ceiling filled with stars. 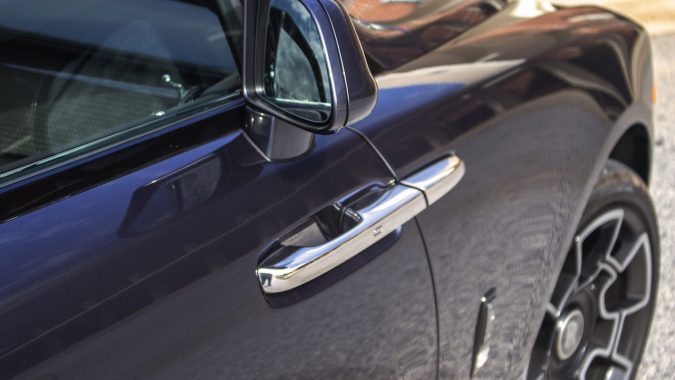 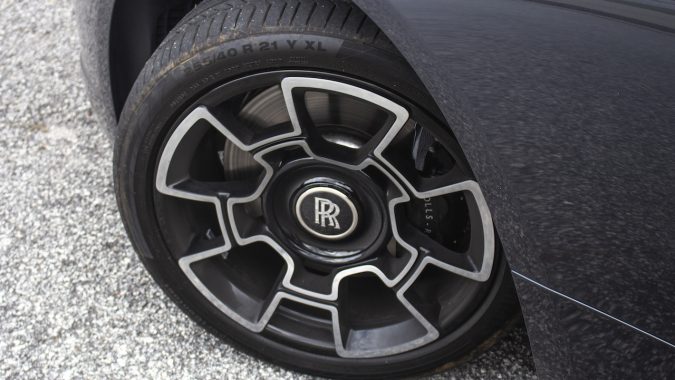 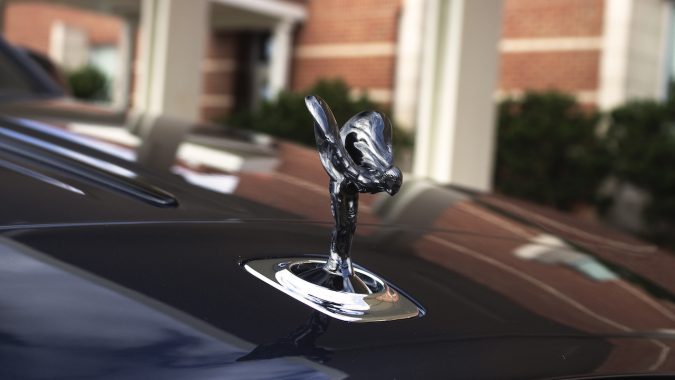 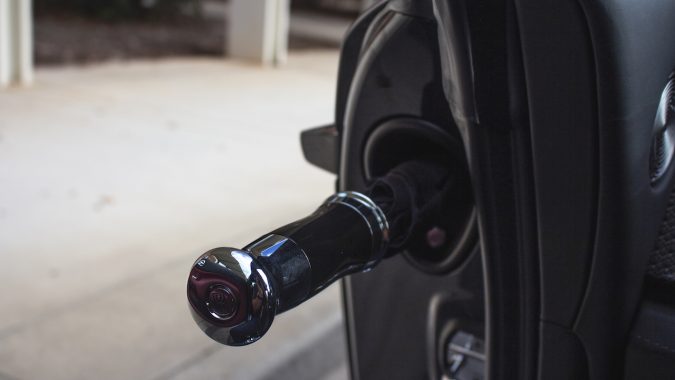 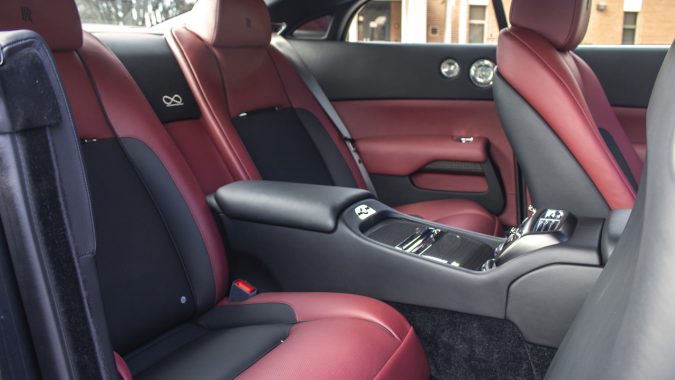 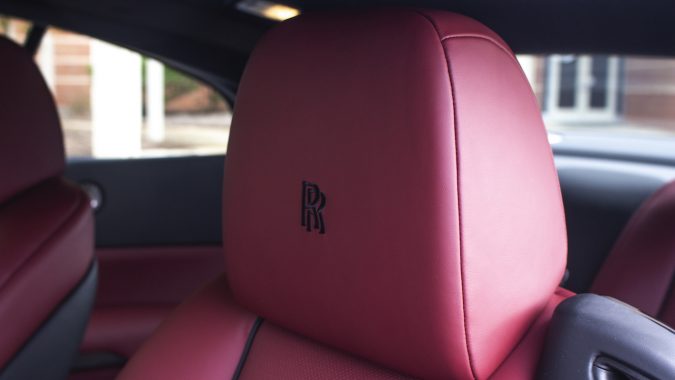 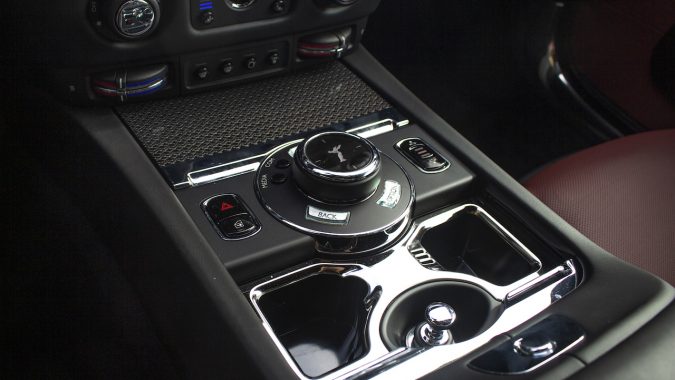 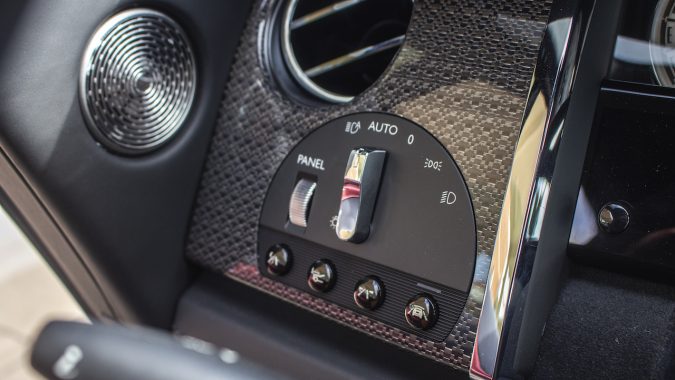 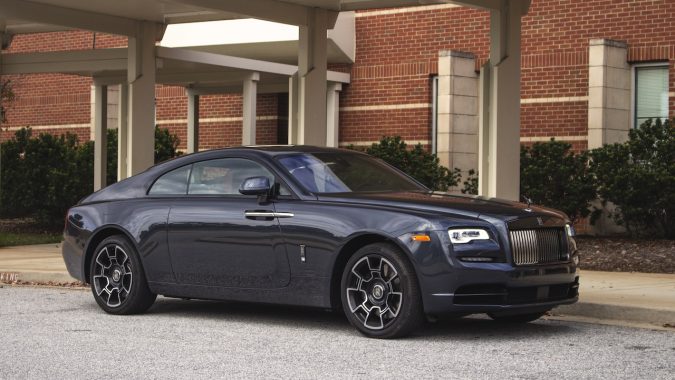 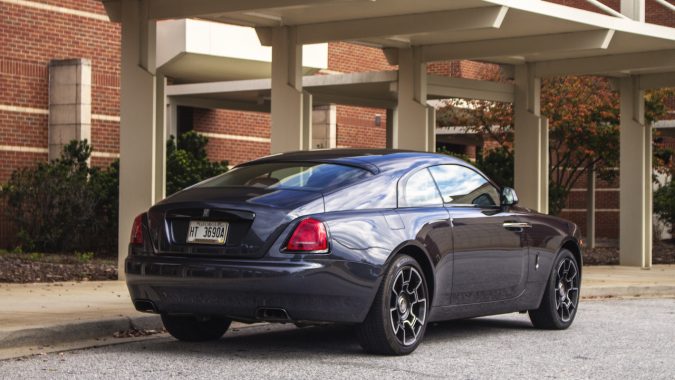