Across this great and vast country of ours, Canadians have a wide variety of preferences and tastes. Look no further than the popularity of tourtière in Quebec and cod tongues in Newfoundland for examples of dishes that pop up with alarming regularity in those provinces but are hard to find elsewhere.

As a nation, we have these patterns with our car buying decisions, too. Shoppers in La Belle Province are well known for buying cubic acres of small economical hatchbacks, while Alberta is rightly known as truck country. These trends extend to brands as well. Nissan’s two highest-volume dealers for Titan trucks reside in Atlantic Canada.

Count the Mitsubishi brand in as a regional dialect. Despite housing just over six percent of this country’s population, a full 10% of Eclipse Cross vehicles sold in Canada found homes in the Atlantic provinces. The brand’s number one dealership? It’s located in the eastern reaches of that region, of course, a store which had the zeal to wrap an EC in hot pink. It sold immediately. Add in a good dose of francophone loyalty and the tri-diamond brand has a healthy presence east of the Don Valley Parkway.

For the 2019 model year, Mitsubishi has added a Black Edition package to the Eclipse Cross lineup. Using the SE S-AWC trim as its base, the dipped-in-ink crossover offers all the equipment of the SE price line plus the creatively named Tarmac Black exterior paint, 18-inch black-painted alloy wheels, and LED headlamps. Just to make sure the universe doesn’t swallow up the Black Edition like an atmospheric anomaly, the company adds on a dose of silver on the door and front grille. 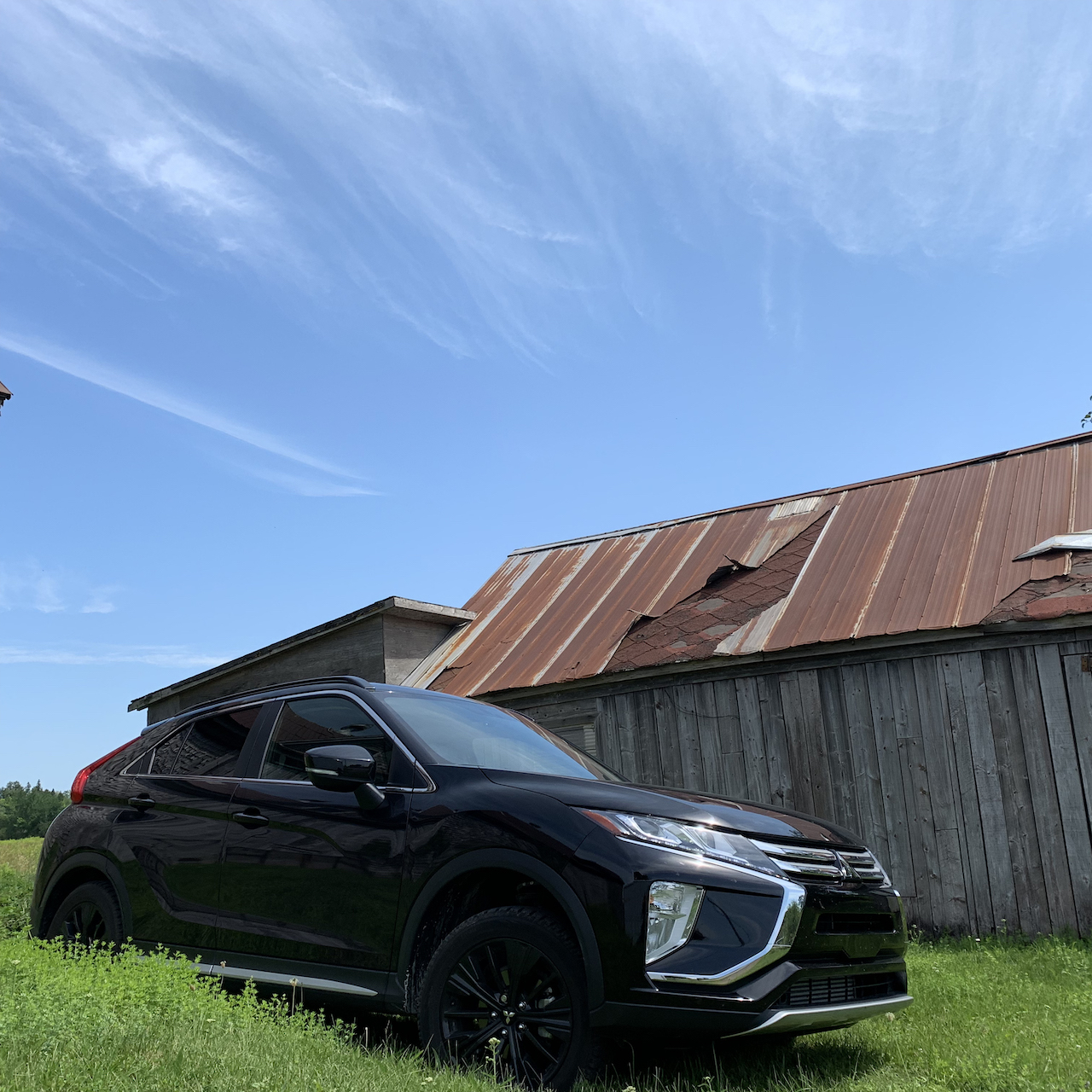 The SE itself is two grand more than the base ES (note to Mitsu: reversing two characters to denote different trims is confusing and the word ‘Eclipse’ shouldn’t be used on a crossover), adding safety kit such as blind spot warning and rear cross traffic alert. Dual-zone climate control are on board in the Black, as are the likes of a heated steering wheel and heated rear seats to complement the already standard heated front seats. That’s a decent amount of extra kit for the Black’s $1000 premium over the SE on which it is based.

A tablet-style screen stands at attention atop the dash for infotainment duties, housing a responsive system that provides just a bit too much detail at once, not unlike an overwhelming PowerPoint presentation. The rest of the interior is logically arranged and there is plenty of rear-seat legroom for the peanut gallery who’ll be busy enjoying their own power outlets and cupholders. The cargo area is wide and well-shaped.

Speaking of cargo space, that metric is often cited as one of the leading reasons by shoppers who are in the market for an SUV or crossover. Only a blind or incomprehensively inattentive individual would fail to notice the proliferation of tall wagons on Canadian roads, an observation borne out by this country’s sales data. According to StatsCan, a total of 189,850 vehicles were bought in June of this year, 74.2% of which were classified as light trucks (including crossover-type cars). Regionally, it’ll surprise exactly no one that Alberta’s product mix of light trucks was a full ten percent more than the national average and – fun fact – about 0.5% of the population in each province bought a new vehicle in June.

After a stretch of increased dealership traffic and influx of new customers, sales at Mitsubishi are roughly flat year-to-date, off just 227 units through the first eight months of this year. This performance is actually robust, considering the entirety of Canada’s automotive market is down a whopping 4.1% so far in 2019. In fact, a total of 57,256 sales have vanished through to the end of August. That’s more than the total volume of Mazda or Kia. 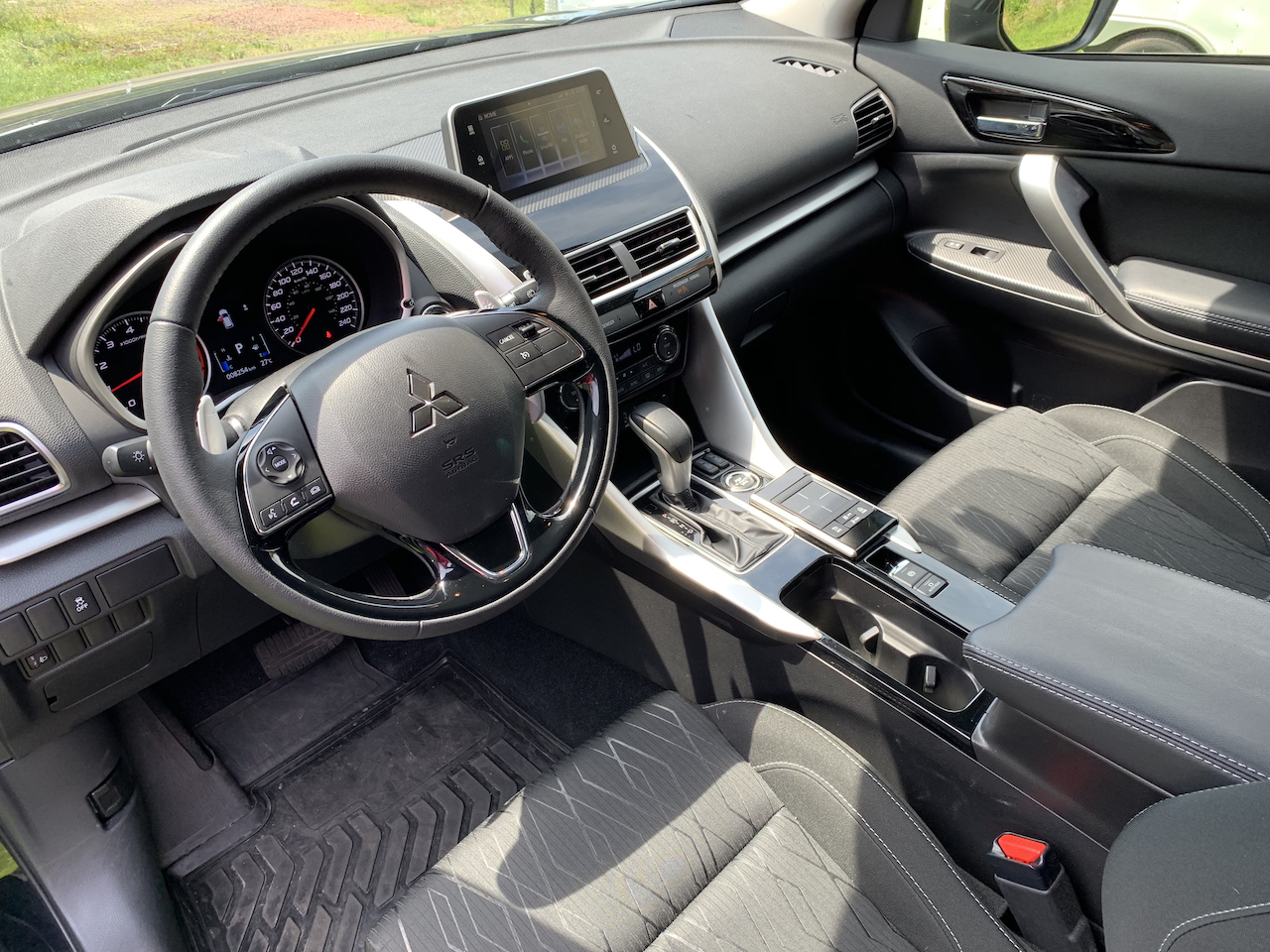 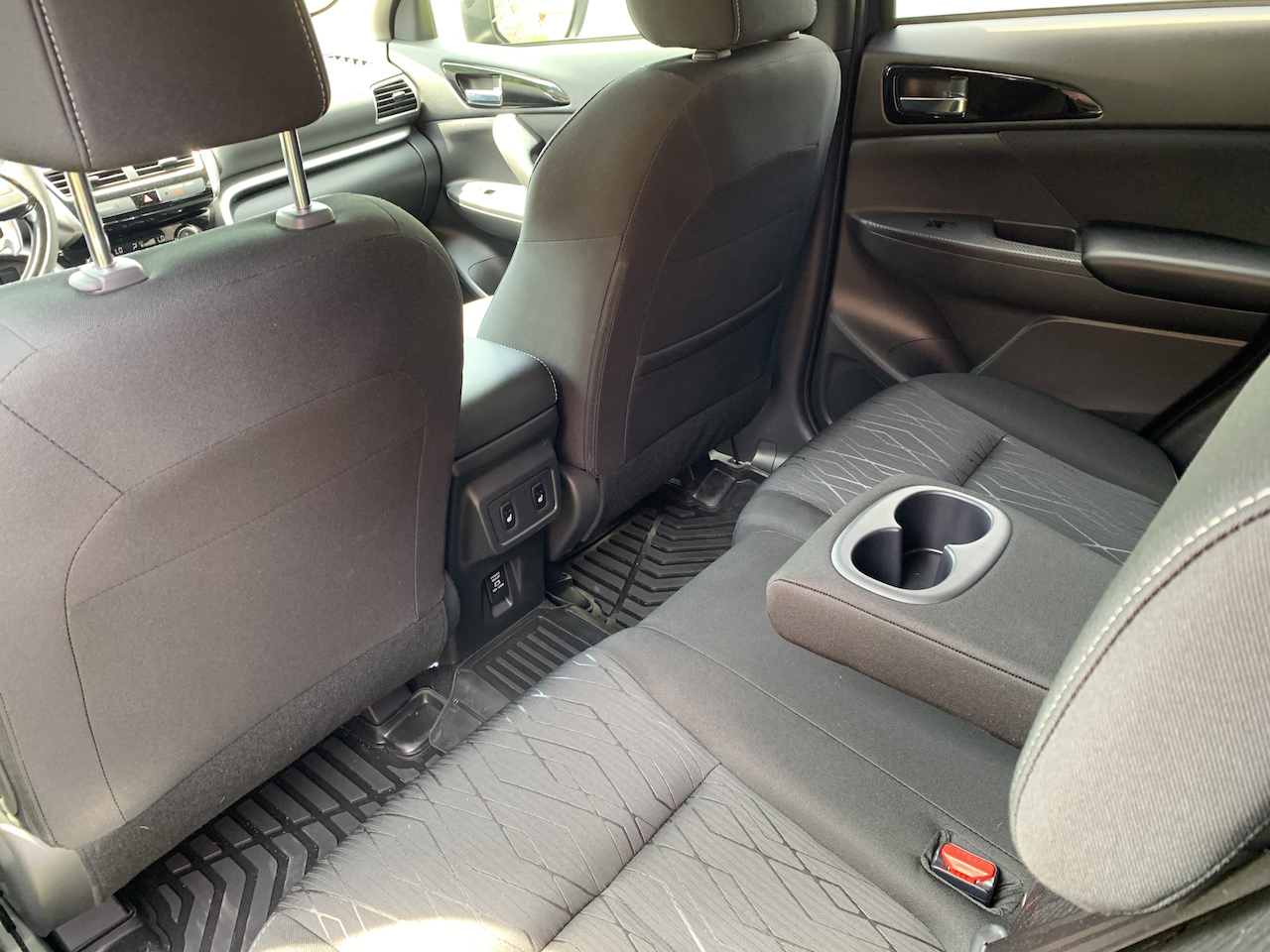 One of the suggested reasons for bucking the trend? Mitsubishi’s warranty stretches 10 years or 160,000km on powertrain components. This has caught the notice of shoppers, many of whom are quick to note that their car will only be running out of coverage when Young Johnny, currently in Second Grade, emerges from high school. Don’t discount this, as the transferrable part of the warranty definitely adds value come resale time.

Whenever that shiny new Eclipse Cross Black goes to a new home, it will have a 1.5L turbocharged inline-four behind its be-chromed snout. Making 152 horsepower, it swilled 51L of regular unleaded over a distance of 523km during its week with us. This works out to 9.7L/100km, in the ballpark of the EC’s official combined rating of 9.3L/100km. The onboard trip computer was slightly more optimistic. 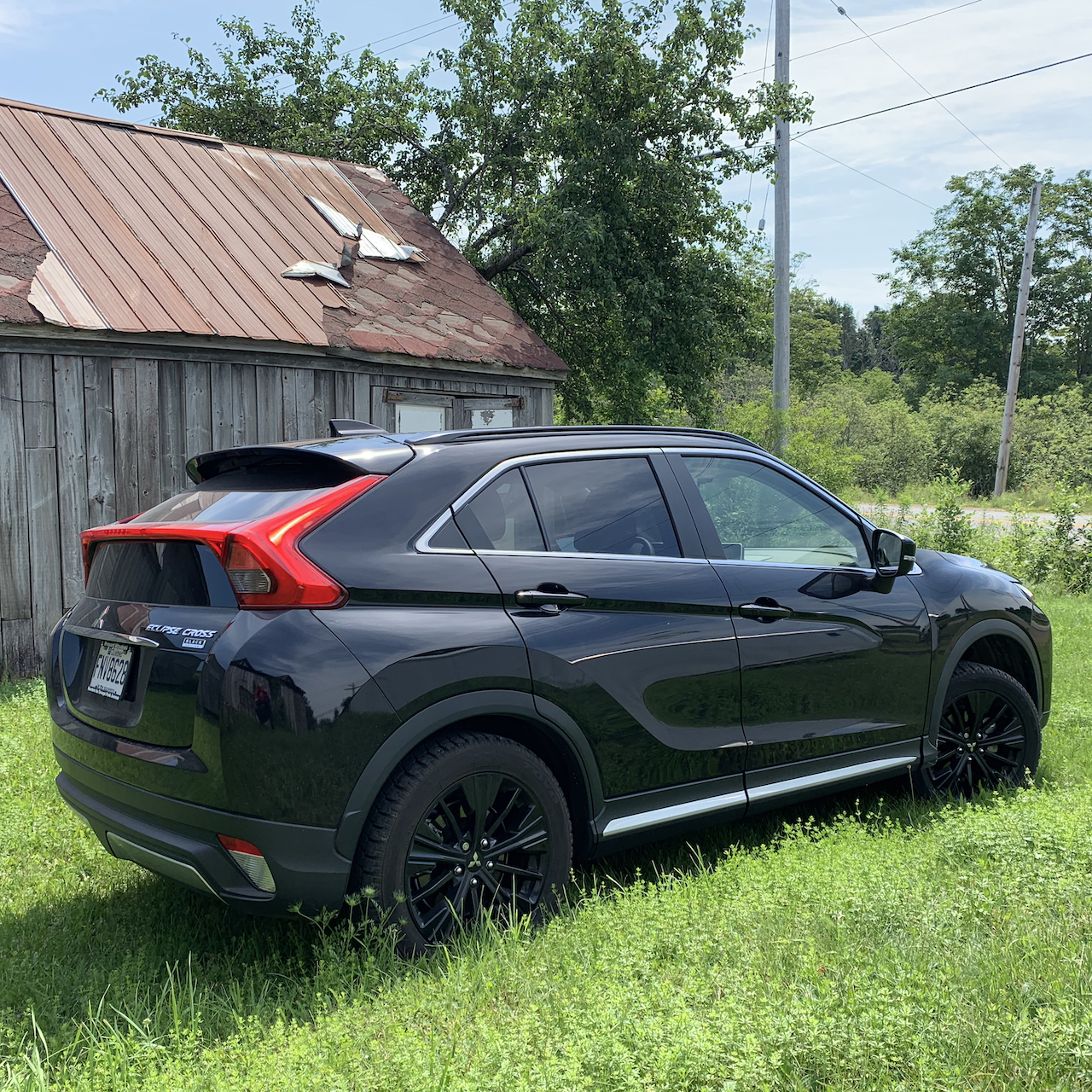 Value-for-money is where the Black package makes a solid case for itself, packing the likes of heated rear seats and LED headlamps for a cool grand. With a lengthy warranty on board, it’s easy to see why the model has found popularity in certain parts of our country.

After all, value-for-money is pretty popular no matter where one makes their home. Just watch out for the tourtière and cod tongues. 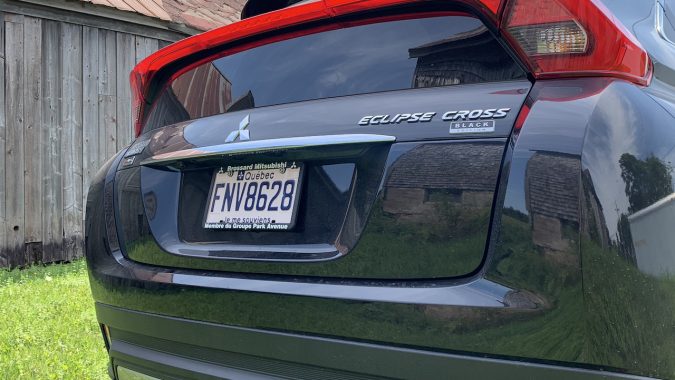 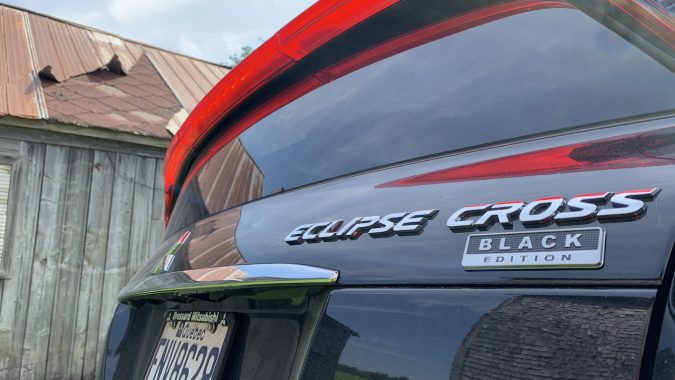 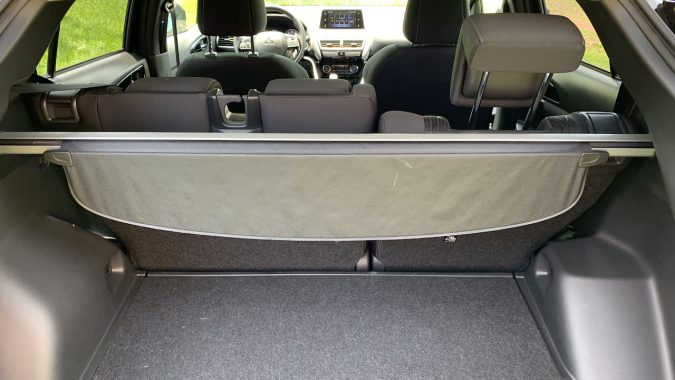