We are living in perhaps the most golden era of all time, where the performance driving enthusiast is concerned. Just about every auto manufacturer builds at least one vehicle which is happy, with a few modifications for safety and longevity, on a race track. We are in a time where vehicles with 300 horsepower are commonplace and vehicles with more than double that number are not only available, but are surprisingly inexpensive. We live in an era where SUVs and crossovers rule the roads and a couple of manufacturers have even figured out how to make those behemoths offer unheard of performance too. Inarguably nobody does it better than AMG.

Originally created as an aftermarket source of hot engines for Mercedes-Benz racing efforts in the late Sixties, the AMG brand awakened the consciousness of North American gearheads when the enthusiast rags began publishing stories about a machine so outrageous that it would become legend. Dubbed The AMG Hammer, engineers used some old school hot rodding inspiration and shoehorned a 5.6L V8, which churned out 360 horsepower (a huge number for 1986) into an E-Class sedan.

As if that wasn’t enough, soon they revealed a wagon version which was rumoured to be good for an honest 180 mph. That is 291 km/h for you Canadian readers who were born after the switch to metric. Minds were blown all over this continent!

Fast forward a few decades and the AMG brand has been brought under the Mercedes-Benz corporate umbrella and as most know, now produce hot versions of Mercedes-Benz’s more conservative offerings. Call them the hot rods of the family, which can be bought in the same showroom.

Perhaps the coolest thing about AMG products is that because they are based on upscale appliances, they allow the enthusiastic consumer to drive say an E-Class wagon that their neighbours see as nothing more than a sensible tool to shuttle Buffy and Chip to and from the stables, and then head to the local race track. There, they can make their best effort to lap like Lewis, before returning to Rosedale in time to relieve the nanny.

Herein lies my problem with AMG. The mighty AMG E 63 wagon, with its thundering 600+ horsepower, twin-turbo V8 is every bit the hammer that a modern day Thor might wish to wield, but the price of entry, before options, is close to one hundred and twenty grand! It is one of my all time favourite cars to enjoy at speed. I have seen the high side of 270 km/h, on track of course, in one of these bad boys, and loved every second behind the wheel. The problem is that, to be brutally honest, I will never in my life be able to afford to own one. 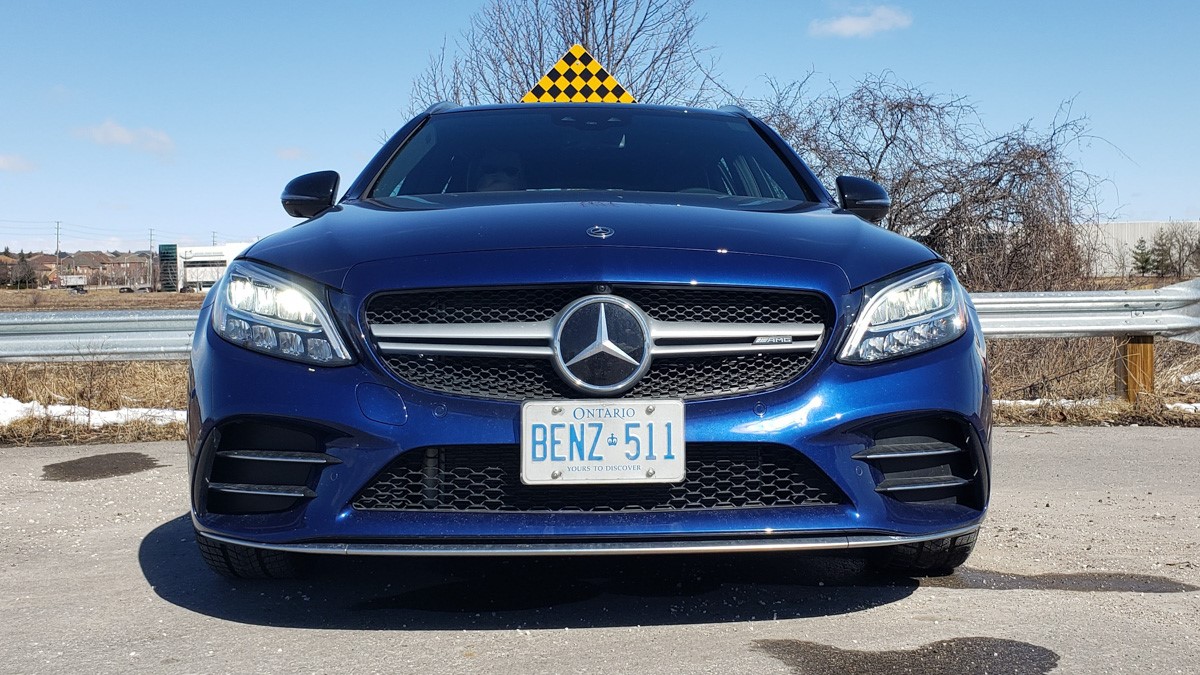 Fortunately, Mercedes-Benz has offered up another AMG wagon for Canadian consumers for 2019, which is a whole new ball game. The AMG C 43 wagon is now available in our market, with a starting price which is fully half of the E 63. That leaves one to wonder if it is half the car that the AMG E is. The answer is a resounding Hell No!

The point of entry for the AMG C 43 Wagon is a surprisingly affordable $59K, which, with options pops up to a tick over 76. Don’t get me wrong a $76,000 ain’t cheap in my books, but it is a totally viable aspirational number, a number which does not make me cry myself to sleep.

Dressed in “brilliant blue metallic”, the C Wagon is an attention grabber to put it mildly. Pretty much every time I parked it, it seemed that someone noticed the car and did a little walk-around, usually ending up at the rear, staring at the AMG badge as they tried to figure out exactly what it was.

Inside, every surface is clad in leather, carbon fiber or brushed alloy, befitting a vehicle of this pedigree. The center console looks stunning with the optional carbon which surrounds the infotainment and climate controls and adds a high tech element to the trio of circular HVAC vents. Perched on top there is a wide format display monitor for the infotainment features and vehicle settings.

The leather clad seats are supportive, yet not as heavily bolstered as some other models in the AMG line-up. This may disappoint hard core track rats, but it does make ingress and egress easier for those of us with back issues. 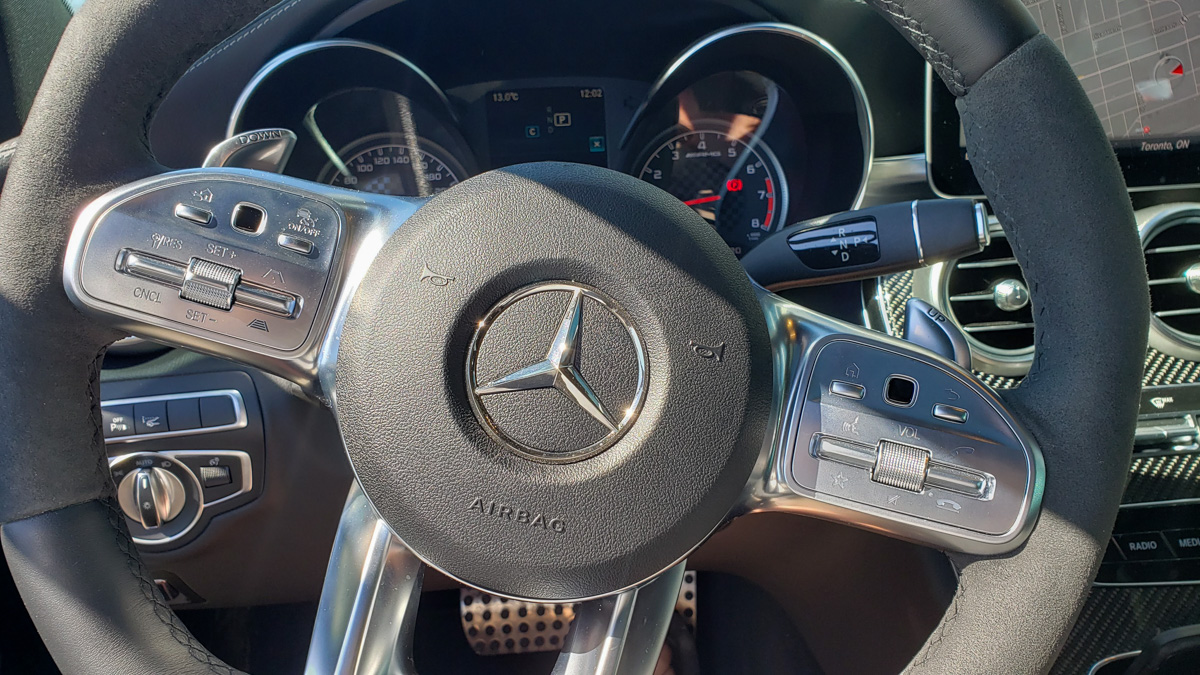 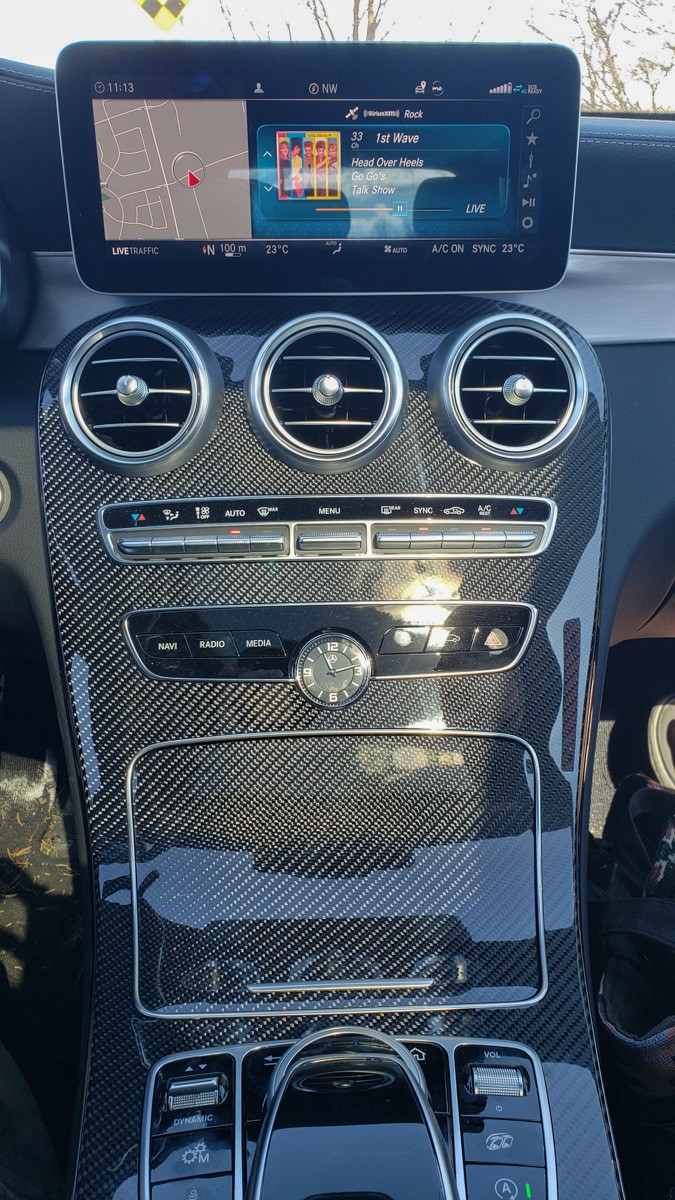 With a press of the start button and an obligatory engagement of a button with a picture of exhaust tips, the AMG C roars into life. Don’t expect the rumblings of a monster V8 however, as the C43 is powered by a direct injected 3.0-L V6 which is force fed by a pair of turbos, churning out a healthy 385 horsepower and 384 lb-ft of torque. The initial audio impression is surprisingly similar to those made by a modern World Challenge race car. Even at idle, the exhaust snarls loud enough to draw attention from across a parking lot.

The power from that glorious sounding engine makes its way to all four wheels through a rather complicated 9 speed automatic transmission which is tuned to deliver ultra-fast shifts. In operation, it feels like a dual-clutch unit but actually features a torque convertor. The idea being that quick shifting lower gears allow for the performance expected from an AMG car, while the highest gears are overdrive cogs which allow for comfortable, fuel efficient cruising.

Many of my overly enthusiastic auto writer colleagues will disagree with me on this, but in operation, the C 43 is a mixed bag of awesome and not so much. A bunch of that has to do with the transmission.

Let’s get the most important bit out of the way first: mash the loud pedal to the carpet and the sexy wagon quite simply hauls ass, with a flurry of lightning-fast shifts, each of which is accompanied by an outrageous blat from the sport exhaust. I didn’t use any testing equipment, but AMG claims a 0-100 km/h time of 4.8 seconds, which feels about right. When the time comes to apply the brakes, which is kinda like immediately after launching when driving on the street, the transmission crisply shifts down in anticipation of the next throttle application. Naturally, each downshift comes with a satisfying burp from the pipes. The high performance aspect of the setup is all kinds of awesome.

The challenge is that like anything devised to bring the track closer to the street, the transmission, does the performance thing really well, but can really suck in daily driving conditions. In the case of this Mercedes-Benz application, the transmission is easily muddled in stop and go traffic, where the computer might choose to upshift to say, third gear, just as the throttle is released and the brake applied and then the throttle applied again. The best description might be to say the computer is confused about whether the driver wants first, second or third, which creates sort of a hobby horse effect as the transmission juggles between gears. Lift off the throttle on hard acceleration in first and the car bucks like it has a manual transmission being driven by a first-time driver. 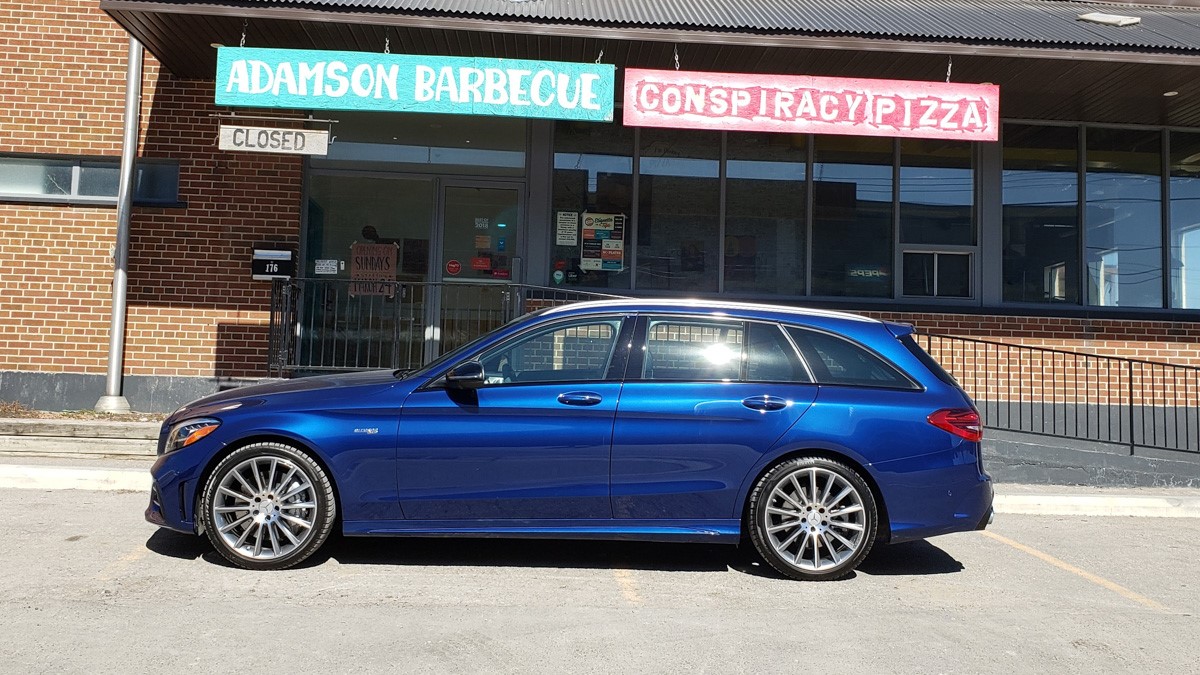 Call it a trade off between performance and comfort. It is the only area in which the potential buyer might actually see a compromise between the AMG C43’s dual personalities, but it does mean that this might not be the car for every driver or even every enthusiast.

Beyond that, the magic of the AMG Dynamic Select system, which adjusts the vehicle’s driving attributes based on the need of the moment, makes tailoring the car’s driving experience a simple one. The default setting is comfort mode, which is, well, suitably comfortable. Pressing a button makes the whole deal feel a bit more sporty or press it twice and choose Sport + mode which is basically a track mode. Everything stiffens up, the exhaust gets seriously vociferous and the transmission holds gears until peak power is attained. Things happen quickly if one is not fully paying attention and speeds which might leave one with a criminal record are reached in no time.

All of this excitement is created by a car which for most will be seen simply as an attractive utility vehicle. A comfortable cabin, with seriously spacious rear seats boasts a cargo area that would be the envy of some crossovers. Europeans have it right, the station wagon really is the ultimate family vehicle and the AMG C 43 is one hell of a wagon at a price that will set you back less than that fully loaded pickup truck that you really don’t need anyway.

With performance that would embarrass many iconic supercars of the Eighties, this is a car that serious enthusiasts with the need for a bit of utility really need to consider. 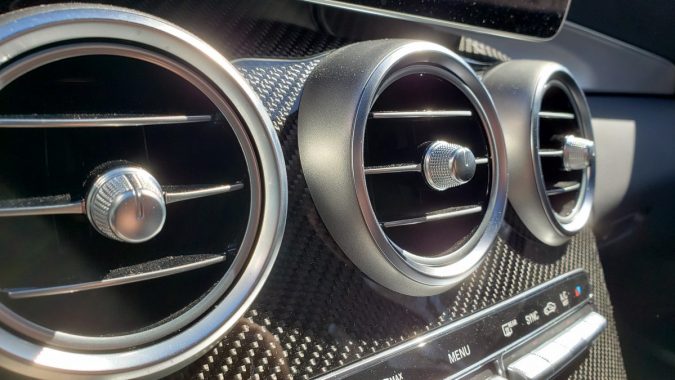 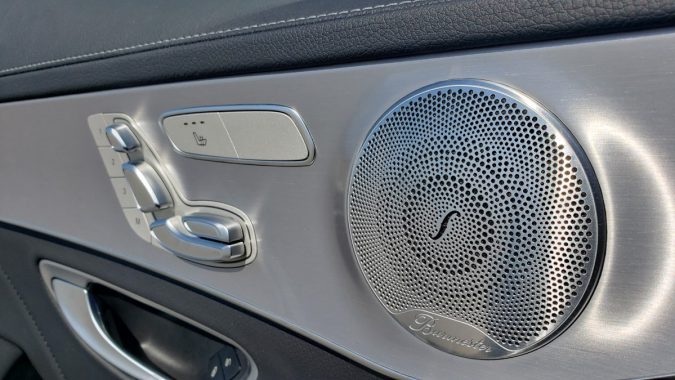 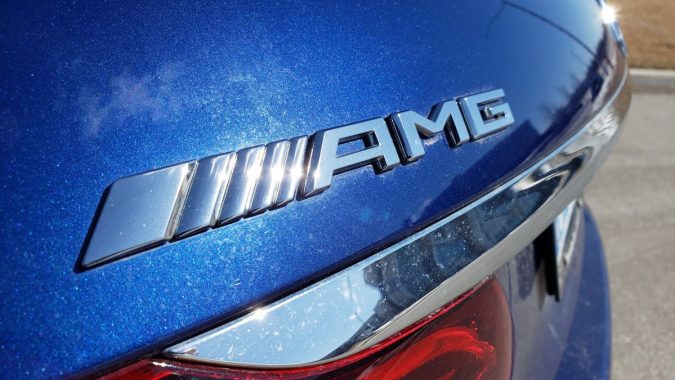 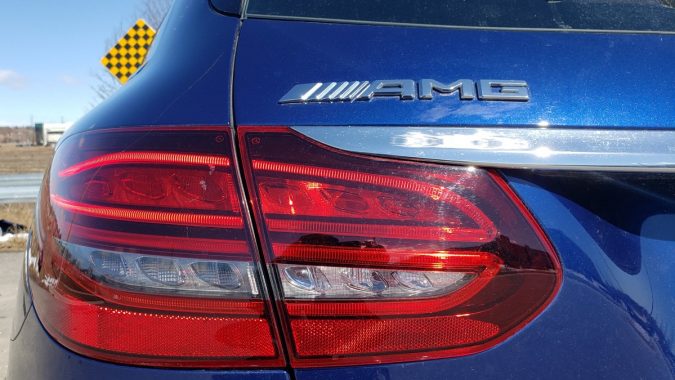 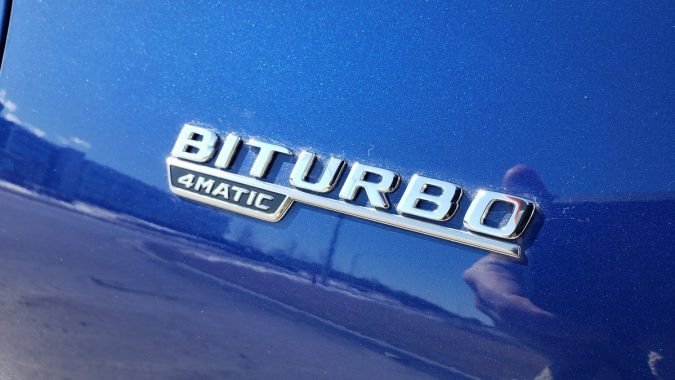 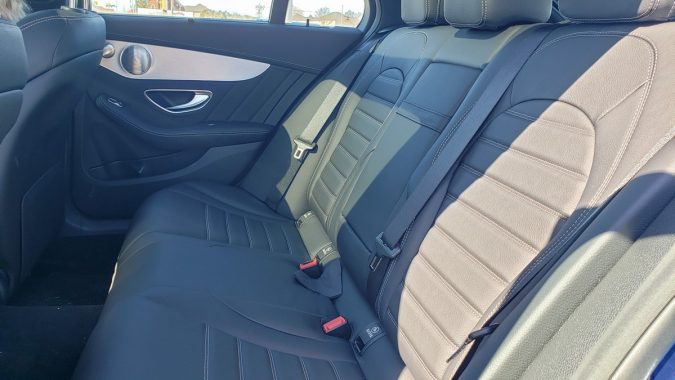 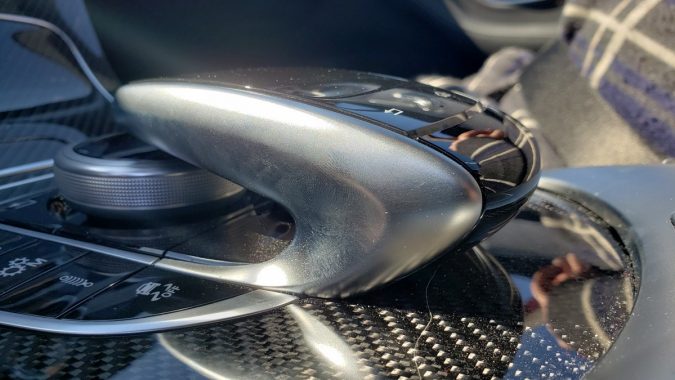 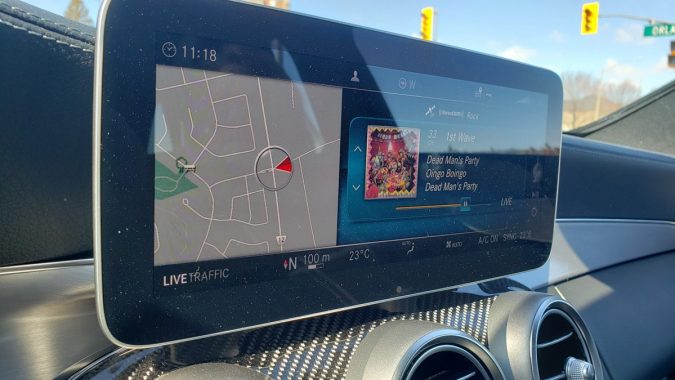 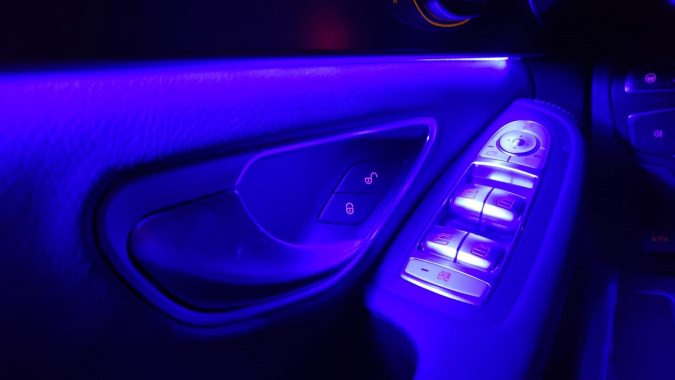