Mazda's 3 grows up, does it stay fun?

With the fourth-generation of its compact sedan, Mazda is moving the Mazda3 decidedly upscale. Zoom Zoom is replaced with “oohs” and “ahhs” from buyers who look at the car inside and out. But has it gone too far, trading sportiness for style and losing its former market, or has it managed to keep the old with the new, carving out a new spot in a crowded segment?

The new Mazda3 moves the brand’s styling forward in an aggressive way. This is a bold car, especially in hatchback form with darker exterior trim. Like many people when they enter their 20s, it looks angry. This car has put the happy grin of the second generation far behind it along with the somewhat awkward look of the gen-3-3 in favour of a deep rage at the realities of the world they’re now just beginning to truly understand. It might not work from every single angle, especially the C-pillar of the hatch, but these are some very sharp looking cars in a segment where “youthful styling” can go too far. 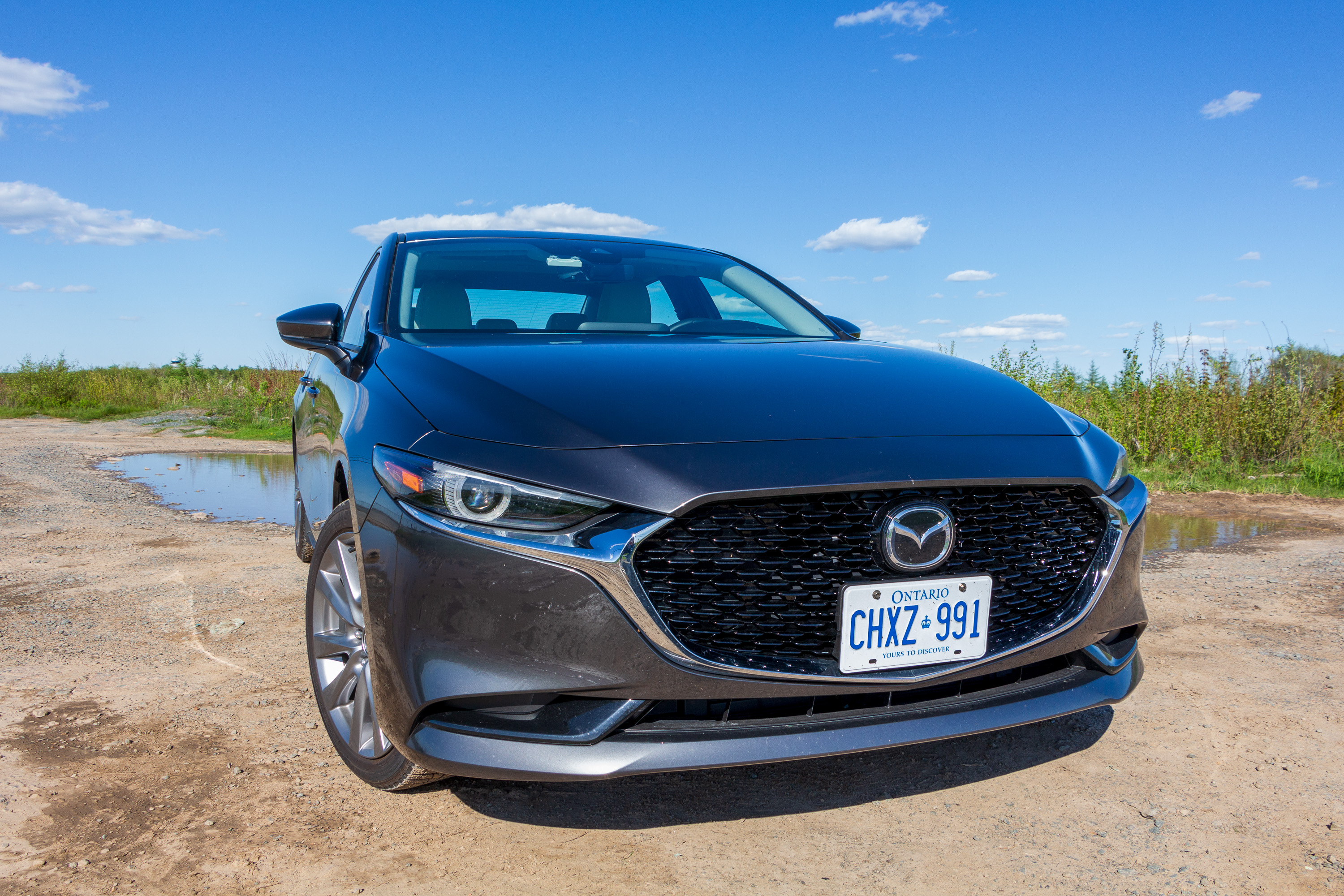 Inside, though, it’s far from angry. Inside the 3 has taken on the design of Mazda’s crossovers that have given them some of the best interiors of any mainstream automaker.

It’s simple and open. With the only strange detailing the faux-vent mail slots that sit in front of the front passenger linking the two real vents. It’s the materials that set it apart, though. The top of the dash is soft, and more importantly, doesn’t reflect its presence into the windshield. Then there’s the leather strip running from the edge of the cluster through the doors on both sides. In the optional white leather of the Premium Package, this strip jumps out at you, even more, adding some serious style.

That stripe helps put a border on the new infotainment system. It’s a larger screen than before, with a revised interface. It’s faster than the old 3, and it comes standard with CarPlay and Android Auto this time, but it still comes with some idiosyncracies and ergonomic bobbles. Like changing the station on the radio; terrestrial or satellite. Unless the stations are in your favourites list, it’s a tap of the dial, a scroll of the dial, another tap, and then you can scroll through the stations. Starting from 0 every time. Don’t want channel 200 after all? Start all over again with that full process and then start to scroll from zero again. It’s frustrating. Much nicer is the ability to start tracks from the beginning on satellite radio and the shimmering water on the navigation system is a neat touch. 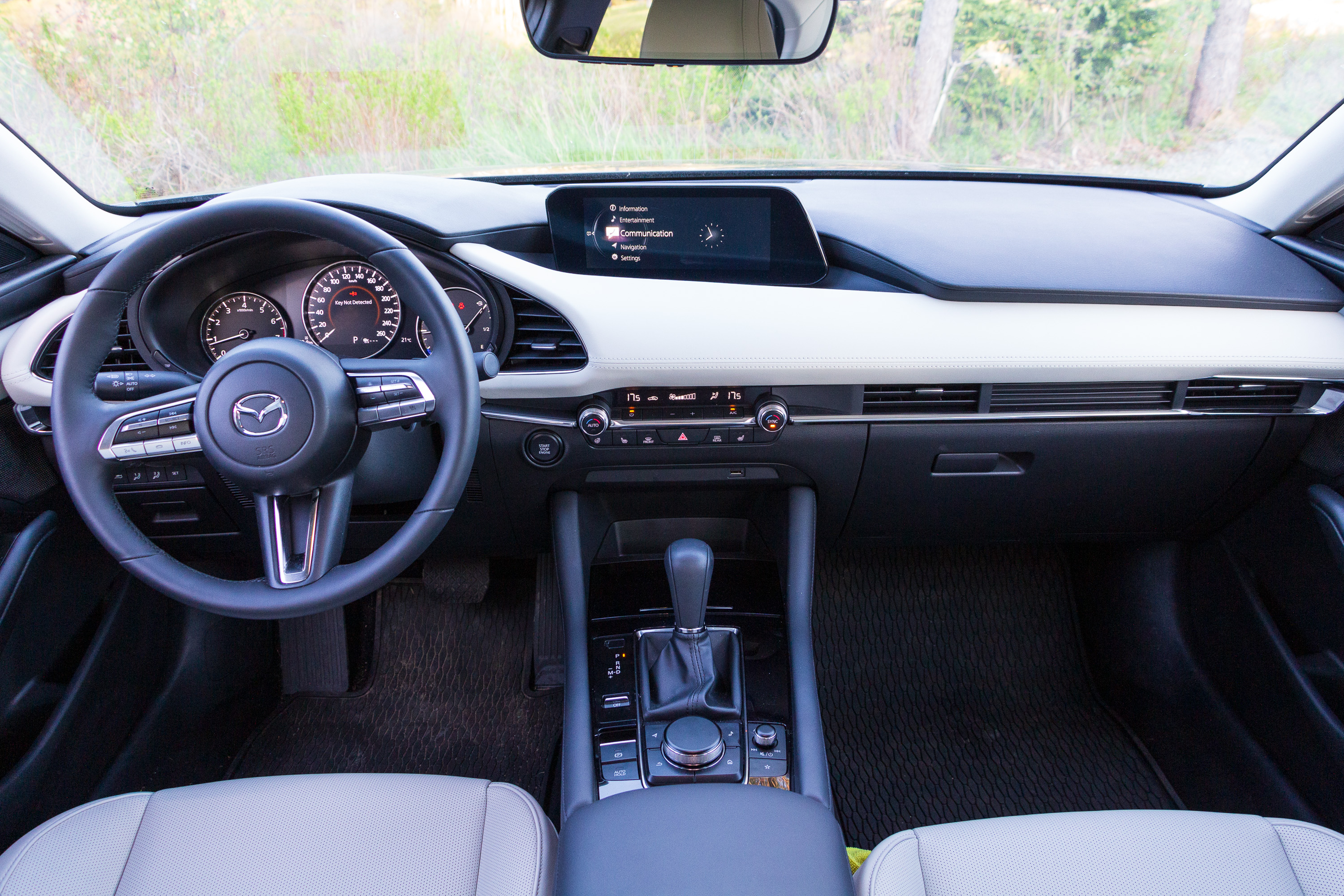 The Mazda3 feels warm and comfortable. Though on cars with the sunroof, headroom can be tight. The cabin is on the smaller side of the segment, offering up more room than Toyota’s new Corolla, in the front at least, but it’s positively tiny compared with the Golf or Civic.

Mazda’s styling comes into play with exterior visibility as well. Not the way you’d expect, though, which would be the C-pillar of the hatch. It’s no worse than most hatches in the segment. This is a review of the sedan, though, where that’s not an issue. What is are the A and B-pillars, which are absolutely massive. The A-pillar is big enough to hide a house at near the road distances and the B-Pillars are 6 cm wider than the Civic’s. They’re wider than the length of my hand, and because the front seats are positioned very far to the rear, the headrest effectively makes the pillar even wider. Visibility out the passenger side of the car, at the angles you want when you’re, say, reversing out of a driveway, is extremely limited, and while it’ll vary by driver, for me there is a 31 cm long wall of pillar and headrest to see around.

The new 3 comes with a pair of engine options. There’s a 2.0L four and a 2.5L four with cylinder deactivation. The big engine is an option on the GS and standard on my GT tester. It delivers 186 hp and 186 lb-ft of torque, figures near the top of the class.

On the road, this engine is happy to rev and surprisingly quiet. One of Mazda’s biggest changes with this car is to make it significantly more refined than before, and it shows. Even at full throttle, engine noise is at a minimum.

In my test car, though, it felt more sluggish than those power figures would suggest. That may be due to the i-Activ all-wheel drive system, optional on this car, but it’s definitely not the fault of the six-speed automatic. If you want three pedals on the GT, you’ll need to get the hatch, but, like all of Mazda’s automatics, this one does the trick just fine. While most modern multi-speed gearboxes hunt for gears, or require multiple efforts to make a downshift, the 3 picks a gear and sticks with it. And it almost always picks the right one. Which makes it a far more enjoyable experience than any CVT. 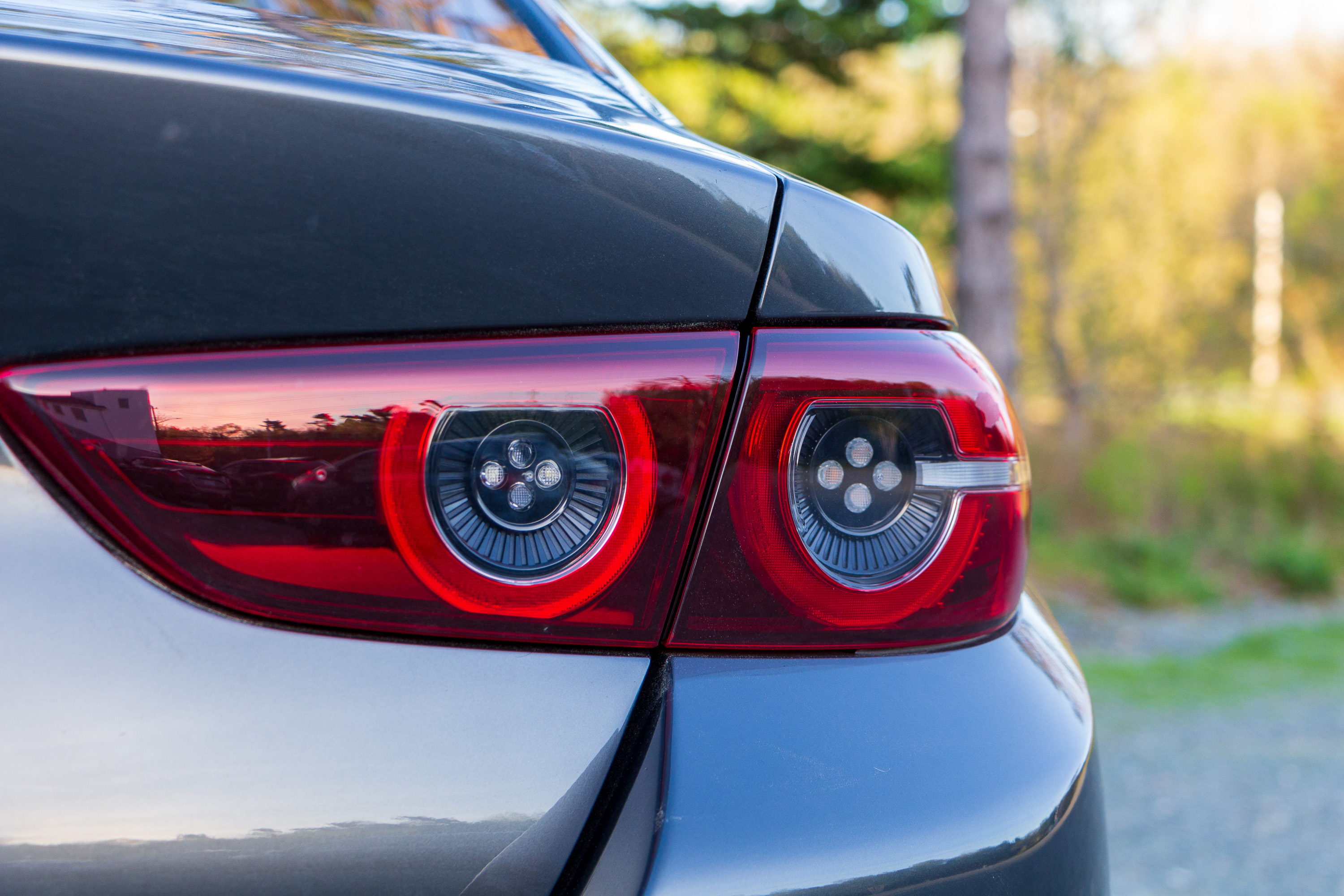 So how does the Mazda3 drive? That’s long been the key to the 3. What makes it different in an often bland segment. Well, good news. It’s a great drive and loads of fun.

It starts with exceptional damping. The 3 absorbs massive bumps with little fanfare, especially taking the 45 series sidewall tires into account. It’s definitely on the stiff side, which helps sharpen the turn-in, but drivers not looking to carve corners should still enjoy the ride.

There’s quick turn in and the heavily-weighted steering builds effort nicely with cornering loads. It also offers excellent balance. It’s not the knife edge link between throttle and cornering angle of the MX-5, but you wouldn’t want it to be in this class. However, it’s not far off, tucking in and pushing the nose wide as you roll out of and into the throttle in corners. Mazda’s g-vectoring control has added braking to the torque management to help reduce roll and direct the nose.

All-wheel drive here isn’t going to shove the tail sideways. Maybe in the snow where the extra grip will likely be noticeable. But that foul-weather grip isn’t the only reason to add a rear prop shaft to this small car, a rare feature in this class. When the sun is out and the roads are dry, all-wheel drive helps you to get out of driveways, especially those that are angled and bumpy, without spinning the inside front wheel. In short, it lets you fit into smaller gaps in traffic and do so with less drama. Which is delightful. 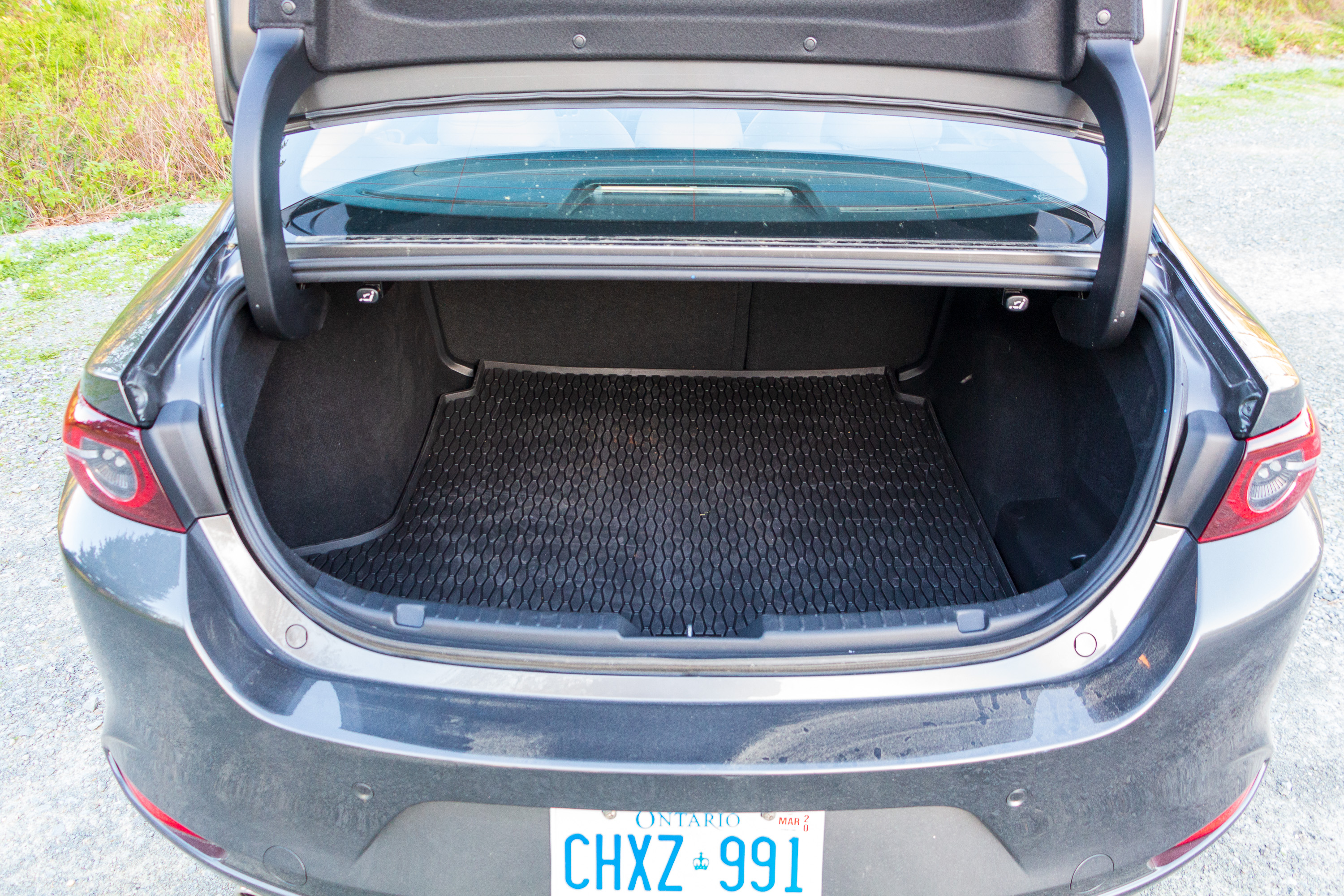 Trunk space is adequate at 374L despite the extra hardware of the rear differential and axles. It’s the same for both AWD and FWD versions of the car. Adding the big engine and driving all four wheels has a mild fuel economy hit, raising the official numbers from 8.8 L/100 km city and 6.6 highway to 9.2 and 7.0, but my average of 7.8L/100km is bang on with what I got in the much slower front-drive Corolla Hatchback.

The new Mazda3 comes with the usual suspect driver aids, including radar cruise with stop and go, smart brake support, pedestrian detection, forward obstruction warning, lane-keep assist, and auto high beams. On this loaded GT, rear brake support and cross traffic alerts are added with rear parking sensors. Mazda’s system operated unobtrusively, though the lane departure seemed to be a bit sensitive to getting close to the line rather than on top of it.

In some segments, simply being new is enough to put you near the top of the class. Not in the compact sedan and hatchback segments, though, where just about every automaker with a half-serious entry has been recently revised or outright replaced. Moving the bar that frequently makes it difficult to stand out. Inside or out, Mazda has managed to do just that. Offering a compact sedan that has some of the best bodywork in the class combined with an interior that truly is the best looking in the segment. Even better, it’s still as fun to drive as ever. It gets a little pricey, especially with the all-wheel drive box ticked, but when it comes to compact appeal, the new Mazda3 is tough to beat. 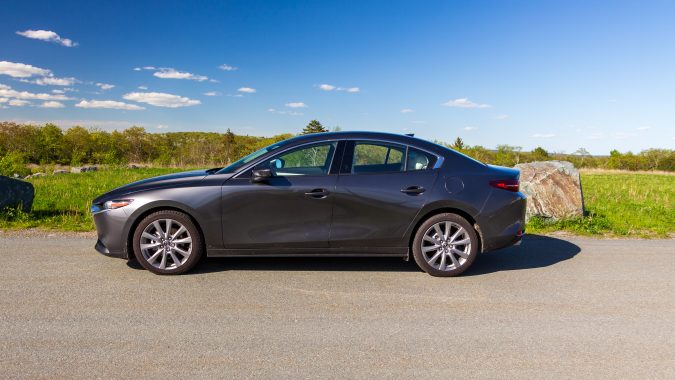 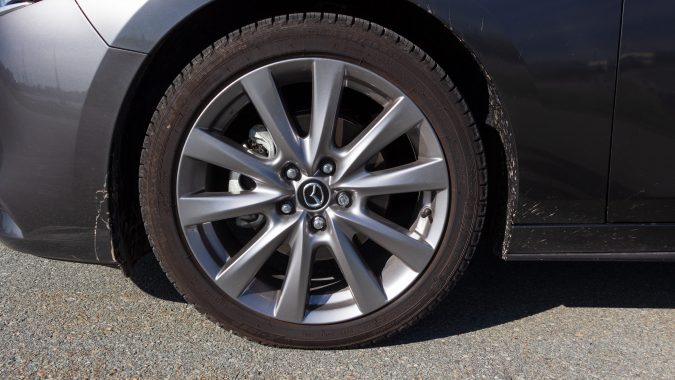 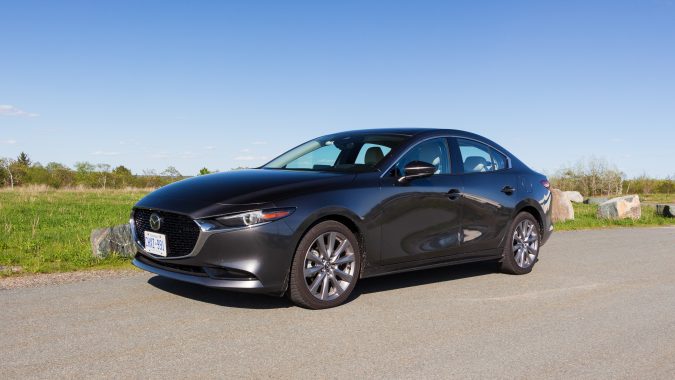 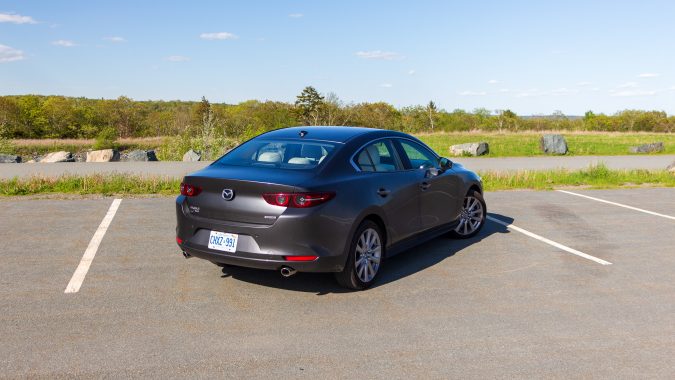 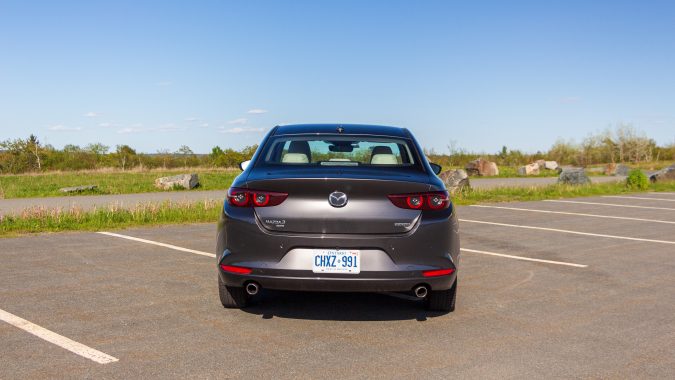 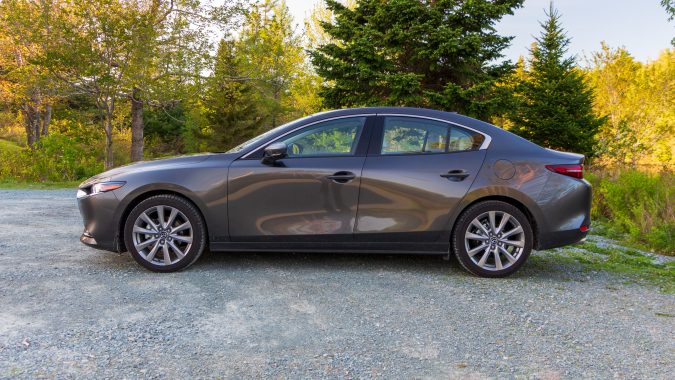 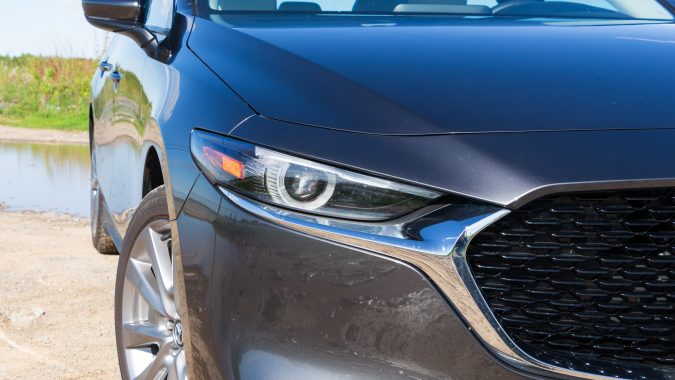 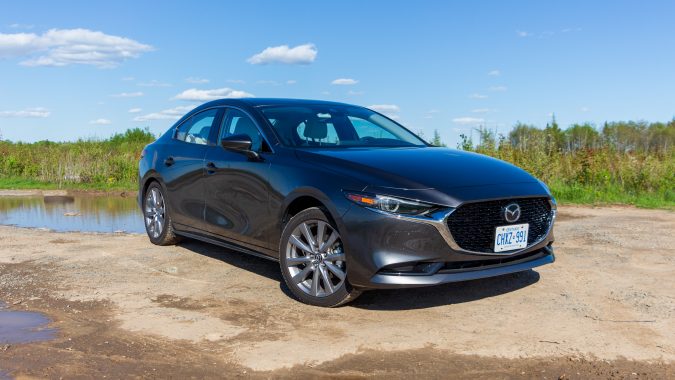 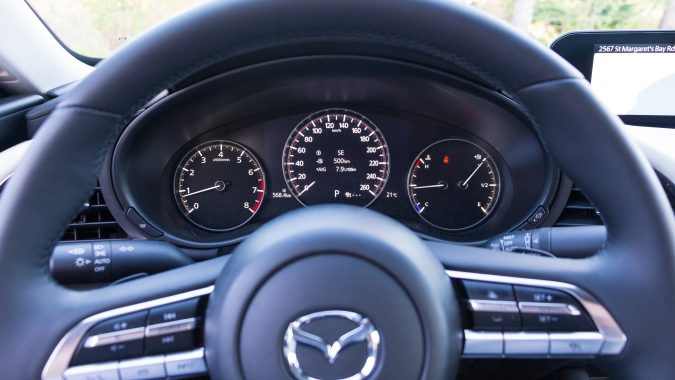 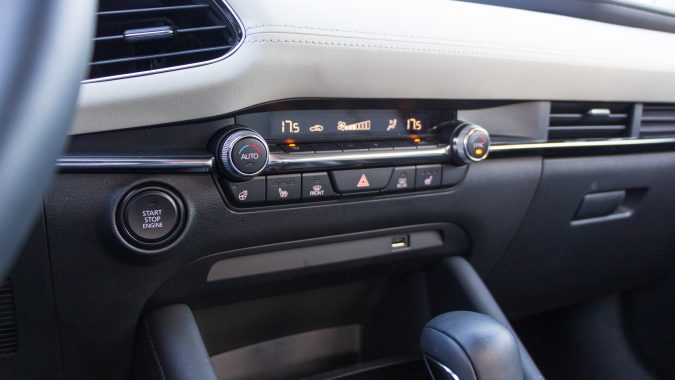 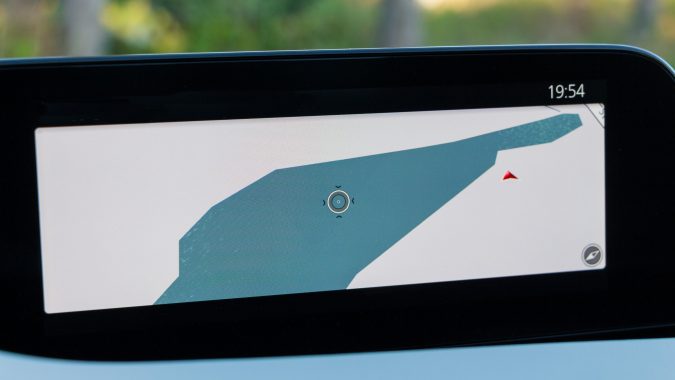 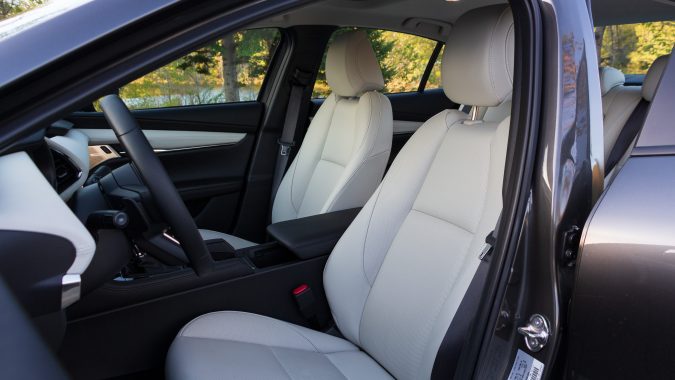 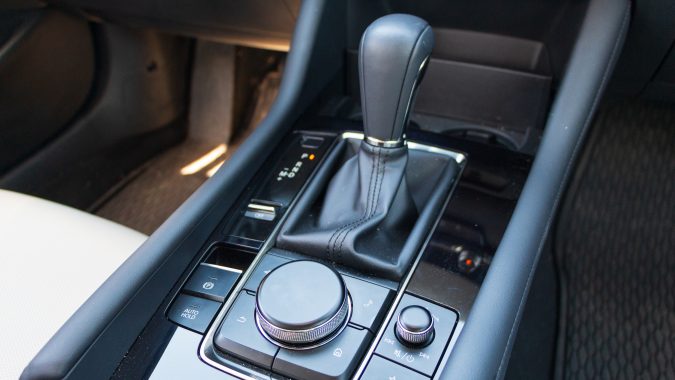 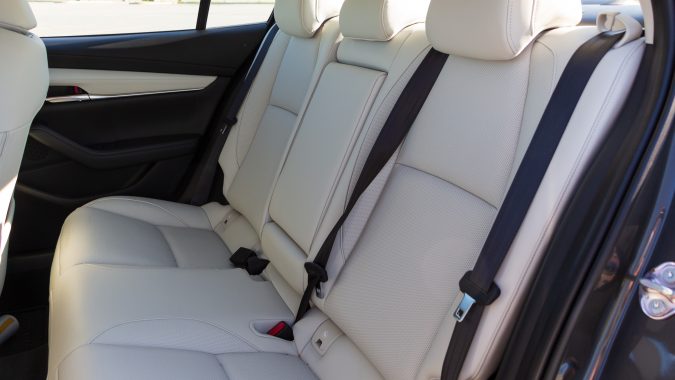 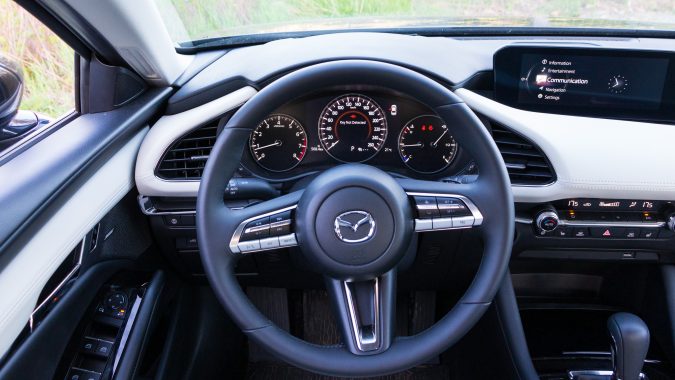 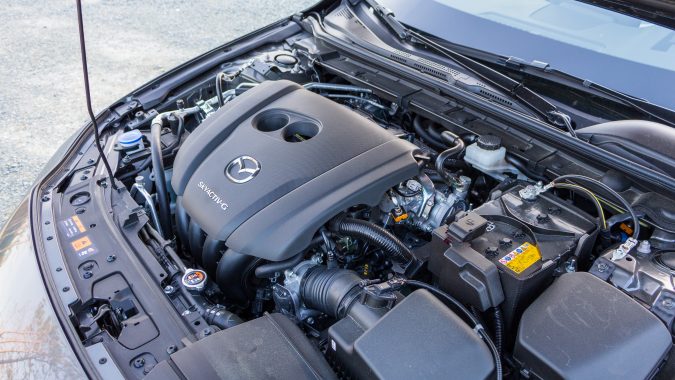