You know a brand has made an impact on the general public when the product name turns up in pop culture with alarming regularity. Music lyrics and appearances in television programs are the obvious examples of this, although one could argue a stronger sign is when parents start naming their kids after your brand. Hey, anything’s better than Abcde.

Lexus has long been a staple in pop culture, appearing in lyrics ranging from California rap to Nashville country, a telling trait in and of itself. Not only is the brand desirable enough to show up in song and rhyme but its appeal transcends wildly different genres. That’s true success, folks.

We recently had an opportunity to spend a week with the new 2019 Lexus ES 350, in an example endowed with the F Sport package. This marks the first time an ES has been available with F Sport, marking a slight change in mission and intent for the brand’s Executive Sedan.

Ridin’ In The Streets 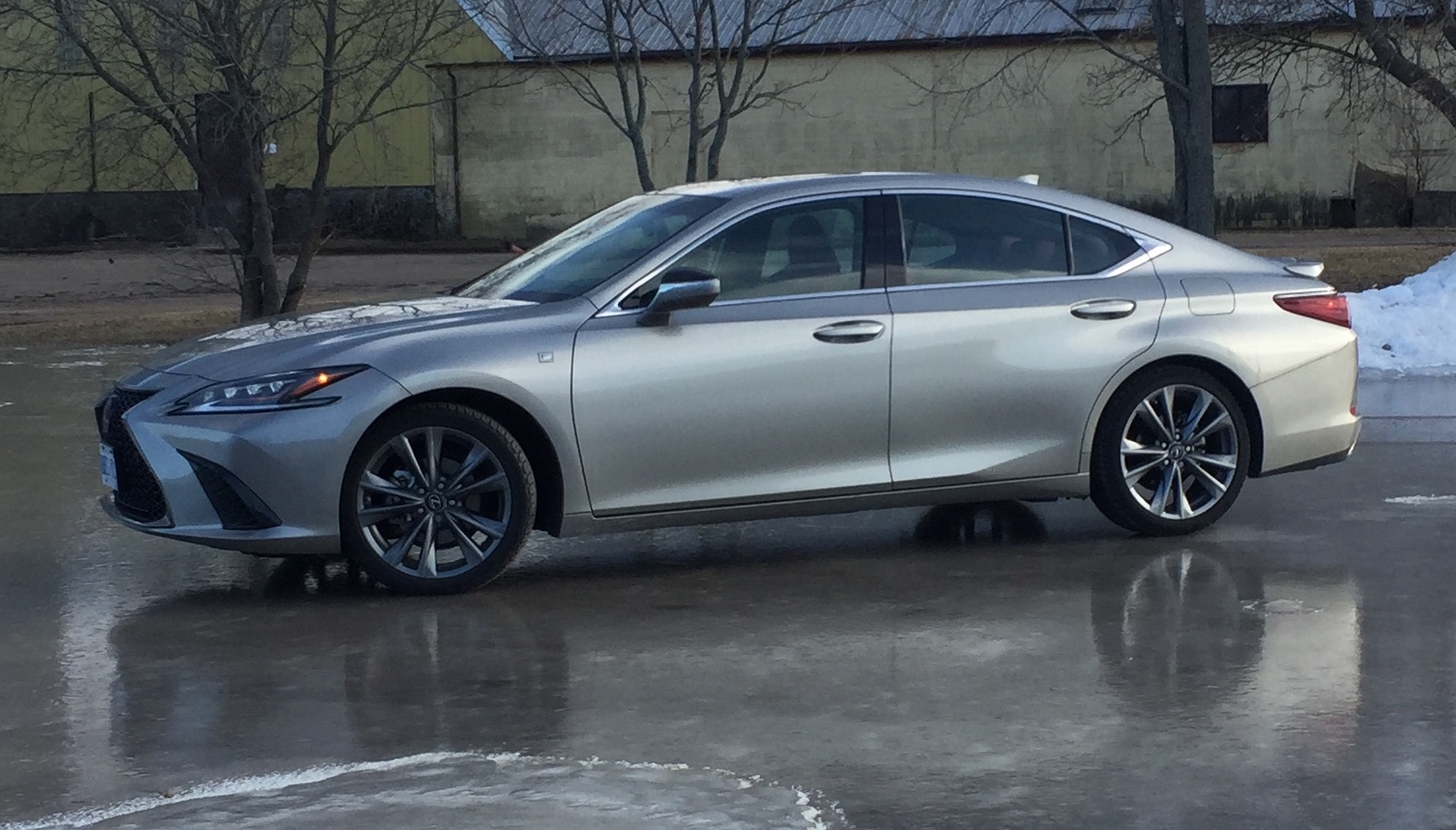 Launched last summer, the 2019 Lexus ES rides on new bones. Using the K variant of the Lexus Global Architecture platform, amusingly abbreviated to GA-K, this ES is 65mm longer than the old model. In keeping with the traditions of car design, this new model is also lower and wider. Wheelbase is increased as well, to the tune of 50mm.

These changes pay dividends inside, especially for those sitting in the front row. Legroom is vast and, unless you’re prone to sticking your elbows out like an NHL enforcer, there’s little chance you’ll bump your passenger riding shotgun. Headroom in the back seat is a bit skimpy for those long of torso but more than adequate for anyone not on the basketball team.

A 12.3-inch display screen is included when any number of optional packages are chosen and is worth the cash. Graphics are crisp and the system is understood once one gets the hang of Lexus’ touchpad system that provides haptic feedback based on whatever’s displayed on-screen at a given moment. Those used to Audi’s MMI may have a learning curve ahead of them but the Lexus system is far from obtuse. Keep in mind that the voice command system works well, too.

The $6000 optional F Sport 2 package opens up the ability to select a tasty set of red seats that cranks the interior style way past eleven. They’re an aggressive set of wingback chairs, complete with dramatic black spears bisecting the red leather and their upper reaches flaring out like the hood of an angry and ready-to-strike cobra. Fit-and-finish is, well, Lexus-like. 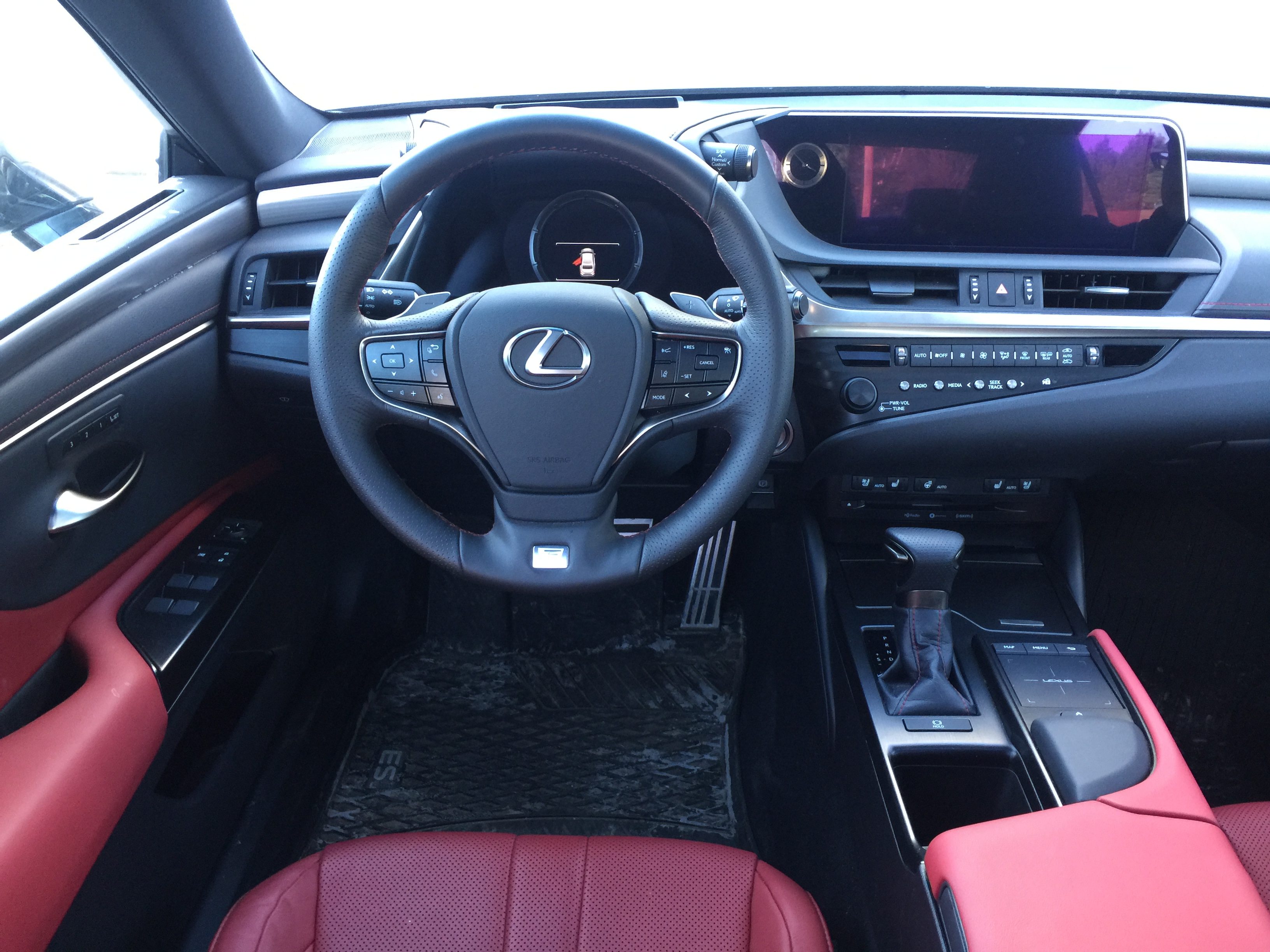 Popping for that F Sport package also installs a dandy set of gauges, ones whose primary party trick includes a tachometer that slides horizontally depending on the selected drive mode. This pays homage to the brand’s LFA supercar, a machine that dropped onto the motoring world with all the subtlety of a crashing airplane. The gauge movement is not just digital trickery; rather, a physical ring actually moves in sync with dials as they reconfigure themselves to your desired setting.

This takes many cubic acres of precision to happen seamlessly and leaves one to wonder – if Lexus took this much care with the gauges, they must have also invested outrageous amounts of focus on the rest of the car. Some might find this detail to be superfluous; I think it’s a confidence-inspiring insight into the rest of the car.

Also riffing on the LFA are twin cylinder-shaped ears protruding from the instrument binnacle controlling the traction control and drive modes. These tasks could have been handled by unassuming buttons located elsewhere or through some menu buried in the infotainment system. Including them as wholly unnecessary yet tremendous bits of theatre is a great nod to both the LFA and the renewed mission of this ES. 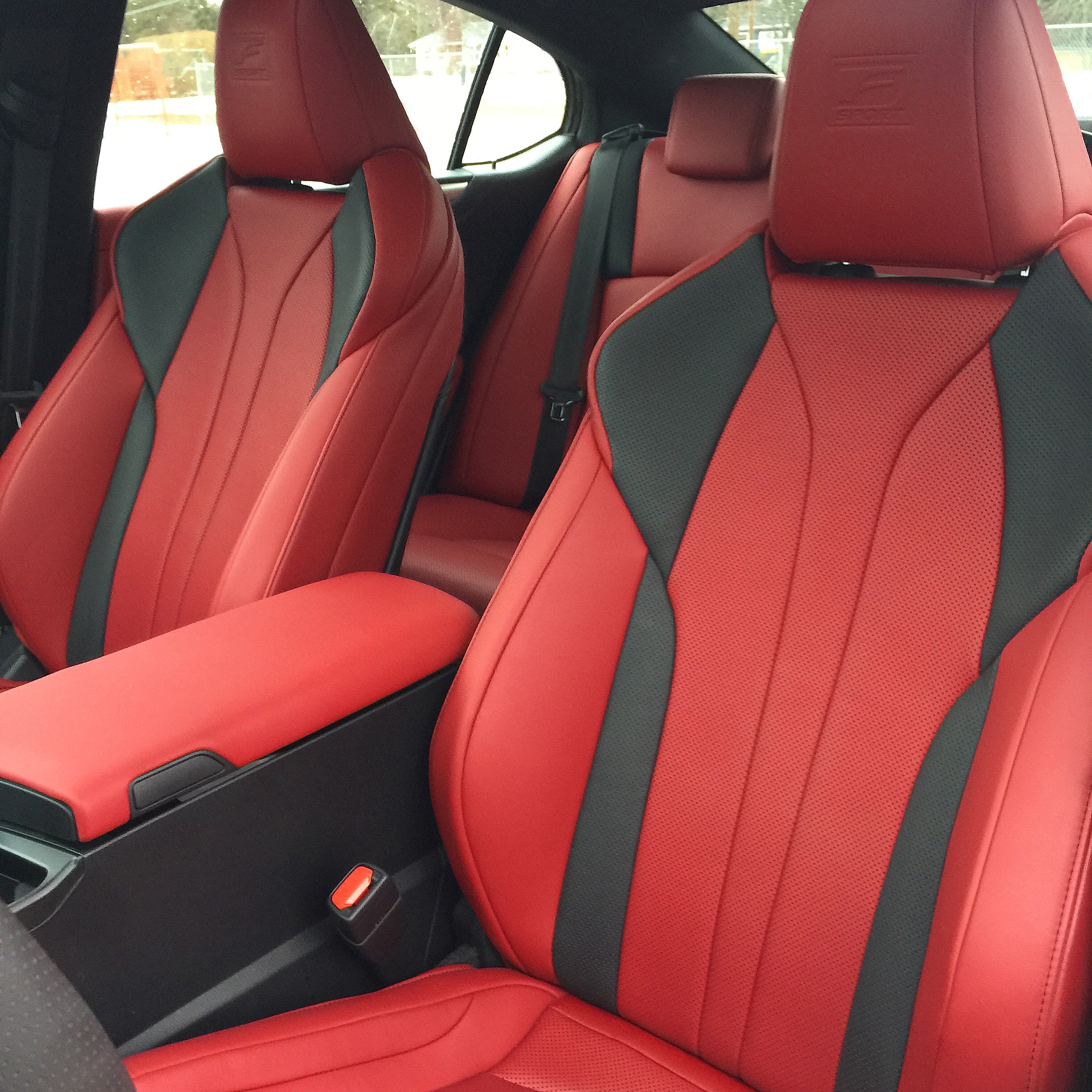 Fresh for 2019 is a newly-juiced 3.5L V6 engine, now making 302 horsepower and 267lb.-ft of torque. These numbers are a bump of 34 and 19 respectively compared to last year. In a nod to practicality, it makes this amount of power when fed a diet of regular 87-octane fuel. This level of grunt is sufficient power for a car this size, despite having added about 35kg during its 2019 restyle.

The weight gain is partly thanks to new sound deadening insulation which covers 93% of the floor pan, up from 68% in the old car. Underbody covers and front fender liners further reduce road noise. It works, too. This thing is a library at speed.

F Sport takes the ES to a higher plane, with the keys being a more aggressive look, an adaptive suspension with 19-inch tires, and a Sport+ drive mode. It’s the addition of the ‘+’ that changes the car’s character. Set to workaday Normal mode, the F Sport suspension delivers supple ride characteristics without letting the car roll over and play dead when shown any semblance of hard cornering. Flicking it into Sport adds a level of crispness to all these details, yet one would still not mistake the front-drive ES for an (*ahem*) ultimate driving machine.

It is only when the settings are twisted all the way into Sport+ do the ES driving dynamics wake up and provide a sharper driving experience. Aggressive engine and transmission mapping poke life into the car while providing a measure of actual feedback. Thanks to fuel economy testing regs, the Sport+ mode must be selected on each key cycle. It’s a step worth taking every time you leave the parking garage. 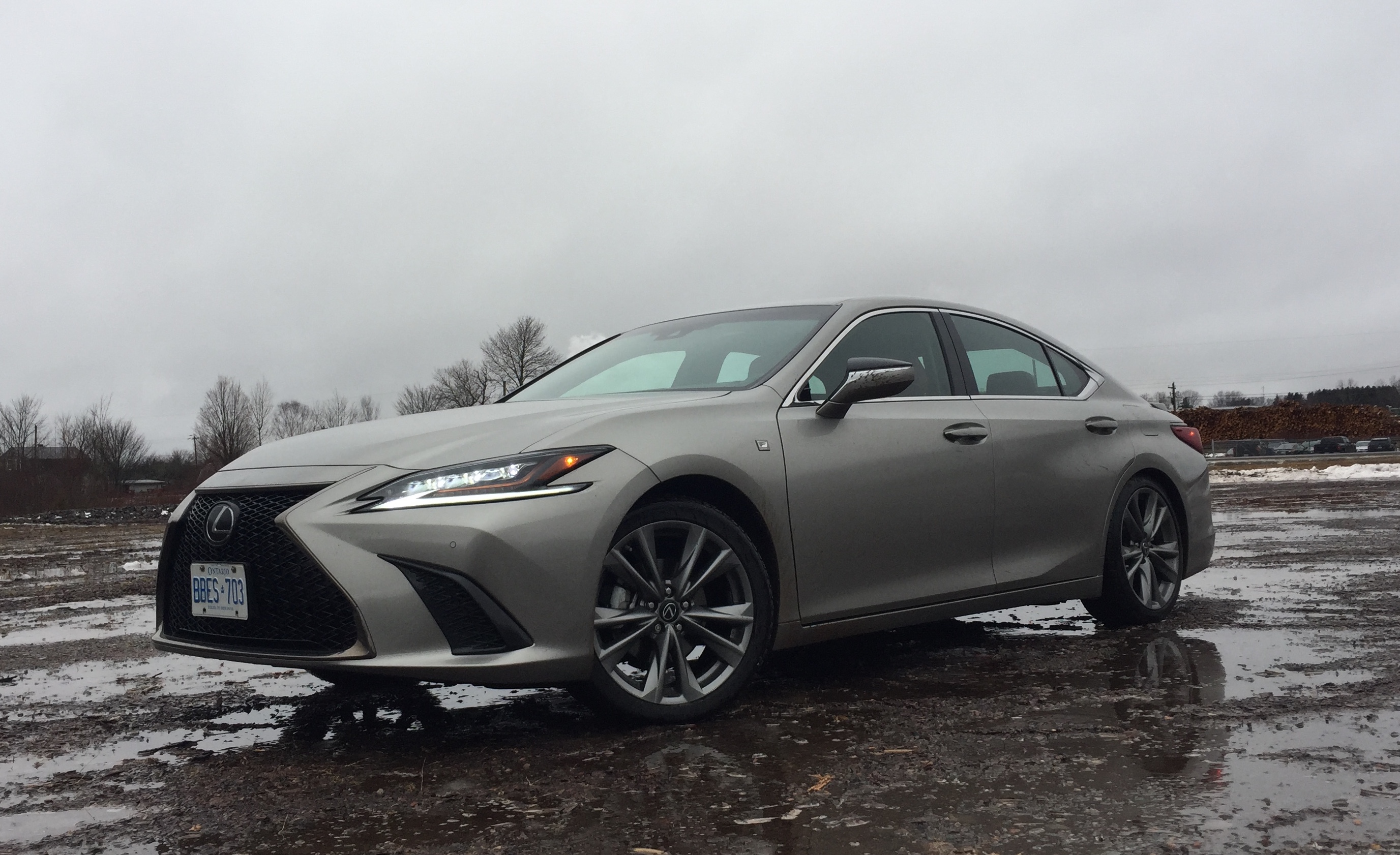 No discussion of a modern-day Lexus would be complete without mention of That Grille and, in this instance, it actually seems to gel with the rest of the car. The F Sport package morphs the grille into a unit lifted from the new LS flagship, binning the standard model’s vertical bars. It’s not for everyone but no longer is it a look that will frighten small children.

The F Sport package also includes rain sensing wipers and triple-LED headlamps, ones which do a good job of integrating the signature Lexus L-shaped swoosh. The compact LED projector main units do their best to illuminate the dark side of the moon. Tail lamps are also of the light-emitting diode variety but are less inspired than the dramatic units found on Lexus’ own IS sedan. 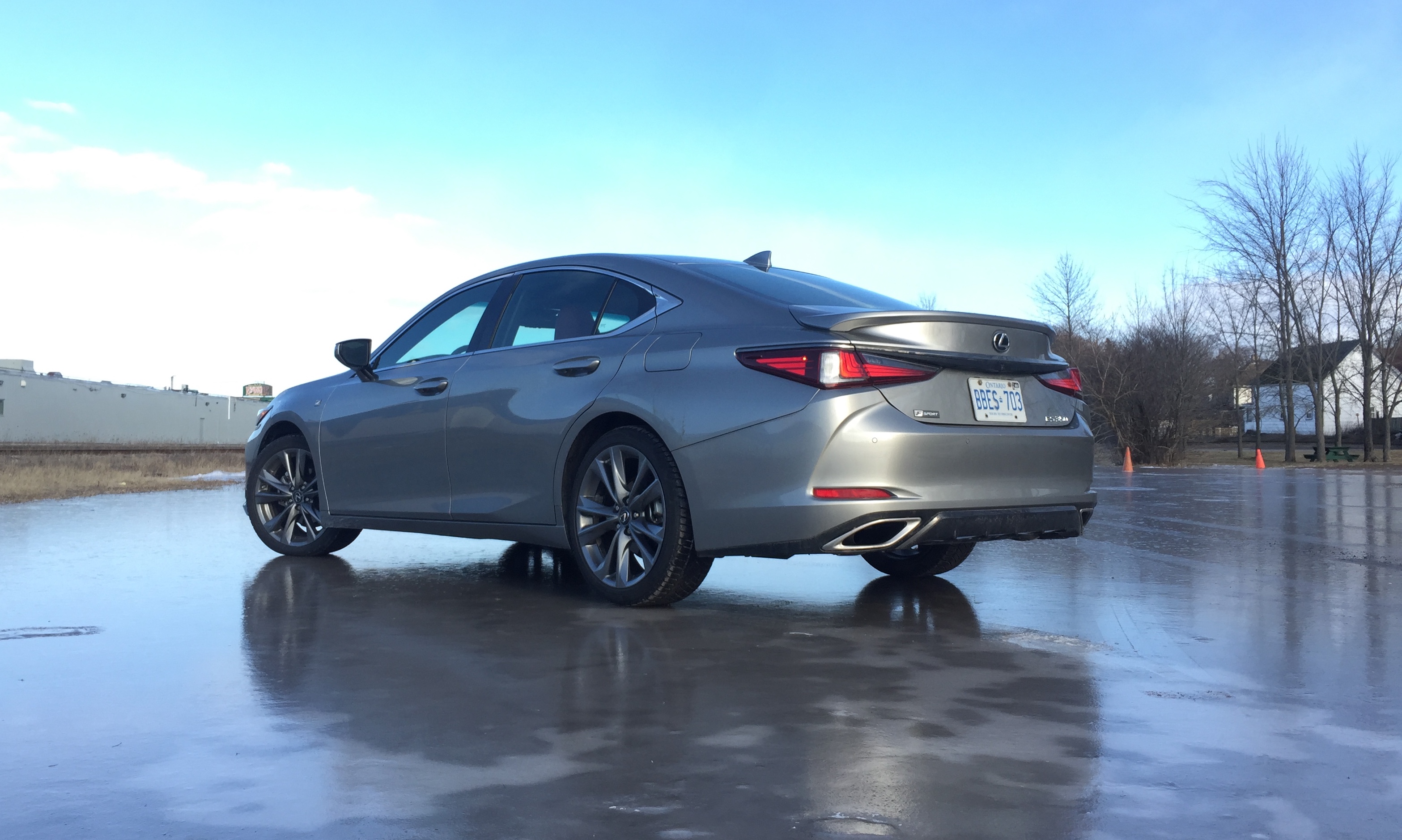 There’s something to be said for a brand that chooses to plow cubic yards of dollars into the company furnace to make a finely crafted sedan like the ES in a world seemingly bent on buying crossovers and SUVs. With mainstream manufacturers abandoning the three-box bodystyle en masse, it is comforting to know that fans of the four-door (*raises hand*) still have options. It’s worth noting Lexus has sold over a million ES sedans since the name appeared in 1989.

Shod with F Sport clothes, this new ES 350 demonstrates the dandy combination of a comfortable and stylish cabin with mannerly driving habits infused with a dash of vigour. That’s a set of strengths sure to please fans of all music styles. 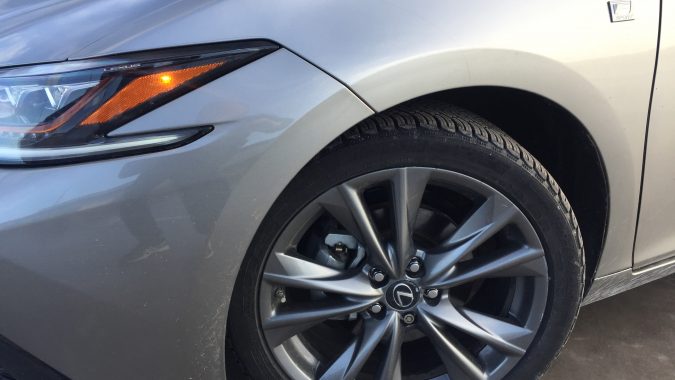 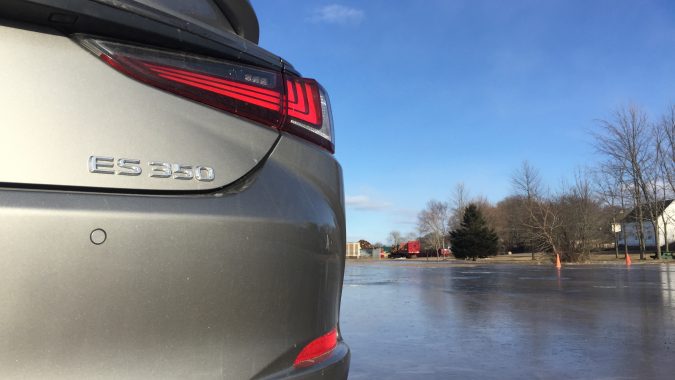 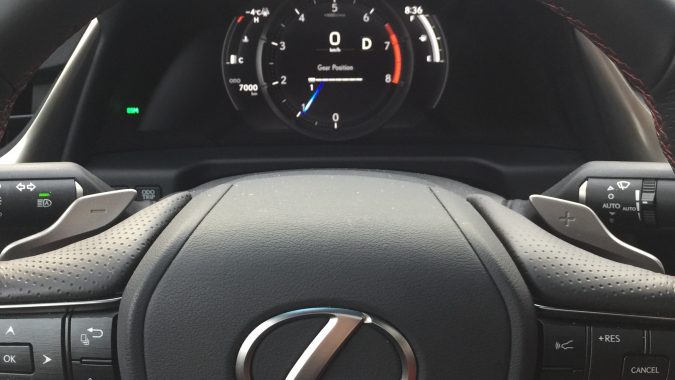 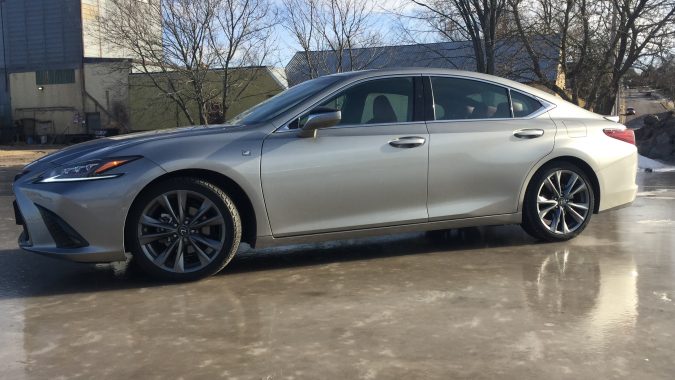