How long before the Stinger leaves us too?

Sedans are dying, that’s a proven fact. So for the Korean machine to release a pair of overachieving four-doors– this Kia GT and the Genesis G70 – was a gutsy move, especially coming from two carmakers who were normally not associated with performance and refinement.

The thing is, Kia, and its sister brands, Hyundai and Genesis, are no longer “getting better”. They’re now up there among the best car builders in the world, sometimes even showing the Japanese and the Germans how to do things.

The Stinger is the fruit of that rapid technological progress. While yes, rumor has it that just two years after its release, it may not be among us for very long due to slow sales. And Kia recently announced that it will be killing off the entry level four-cylinder GT-Line trim next year.

It’s sad, really, because while it was here, the Stinger did a bang-up job of making its mark in the industry. It served as a statement to the entire world, one that screamed loud and clear that Korea can in fact manufacture well put together and capable sports sedans sold at an attainable price. As a matter of fact, the Stinger was so good when it was released, that it took home the coveted AJAC Canadian Car of the year award.

But wait. Why are we talking about this thing in the past tense? While it may not be the number one vehicle on the list of Canadian consumers, the Kia Stinger is still among us, still very quick, very capable and still stunningly attractive.

We too, love the Stinger GT. So much so that we took it out for another drive in its latest 20th Anniversary Limited Edition variant. It’s a package that steps things up a notch from the top-shelf Stinger Limited by adding unique 19-inch wheels, red Nappa leather interior surfaces, carbon fiber inserts and red Stinger embroidered carpets. It also only comes in one model-specific color; a matte grey finish Kia calls Phantom Grey which, we admit, looks the part. It’s all sold at a retail price of $53,495. 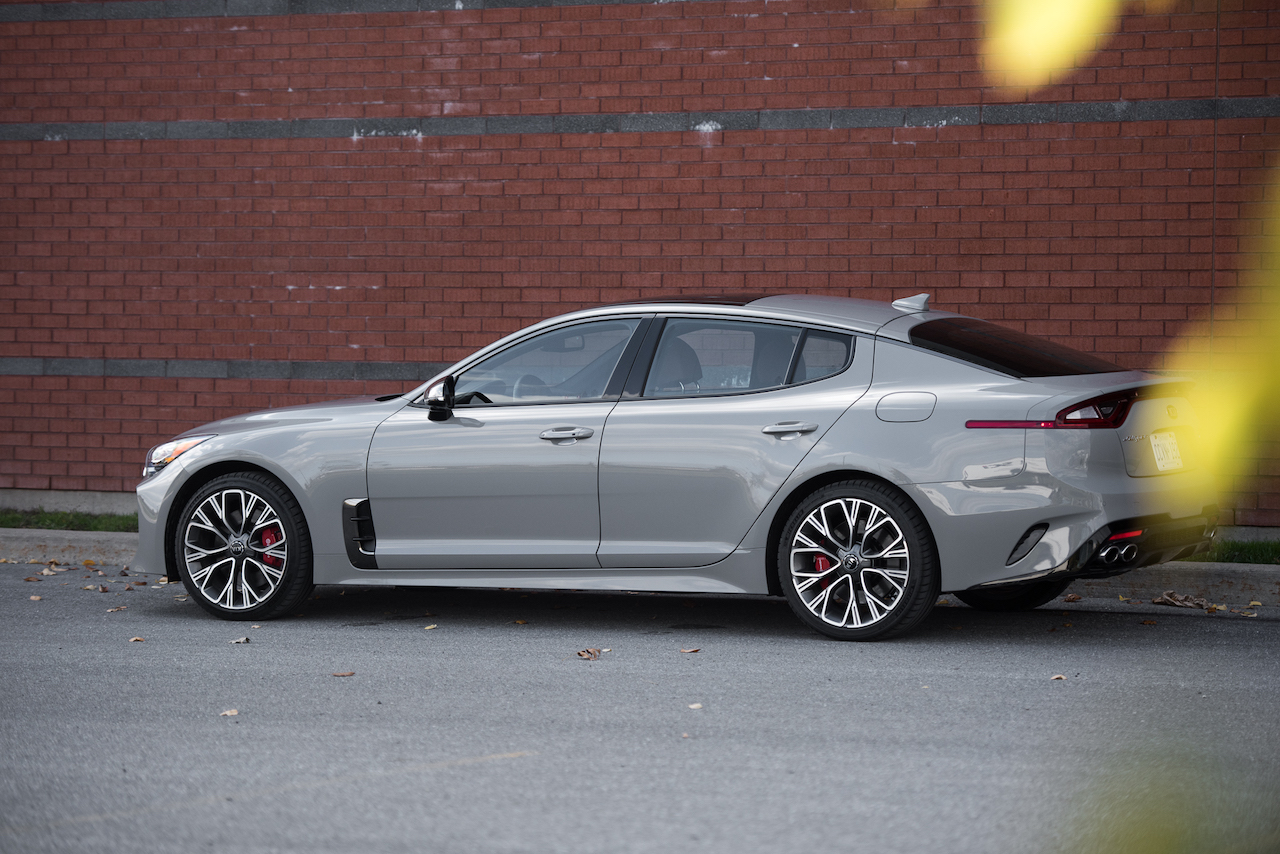 Mechanically, things remain intact, which means it’s still powered by a twin-turbocharged 3.3-liter V6 good for a stout 365 horsepower and 376 lb-ft of torque, all mated to an eight-speed automatic gearbox. Canadian Stingers come standard with all-wheel-drive. Thanks to a launch control system, it’ll sprint to 100 km/h from a standstill in just under five seconds.

The moment the Stinger showed its face at the Detroit Auto Show back in 2017, it’s been a show stopper due to its unique shape, bad-boy presence and downright cool-factor, qualities that remain the car’s best assets today.

But the greatest thing about the way the Stinger looks is that it resembles no other car on the road; it really has its own bespoke character and personality. Yes, it rides on the same platform as the Genesis G70, and even borrows the same engine and transmission, but you’d never guess that when comparing both cars side by side. The Stinger is considerably longer than its corporate cousin, with a sleek fastback configuration that not only distinguishes it from pretty much all other sedans on the road, but also gives it real-world versatility.

Get this: the Stinger’s hatchback trunk will engulf up to 1,158 liters of cargo space. When you think about it, that’s not too far behind a Mazda CX-5 crossover (1,687 liters). It’s also miles ahead of midsize sedans like the Honda Accord (473 liters) and Toyota Camry (428 liters). 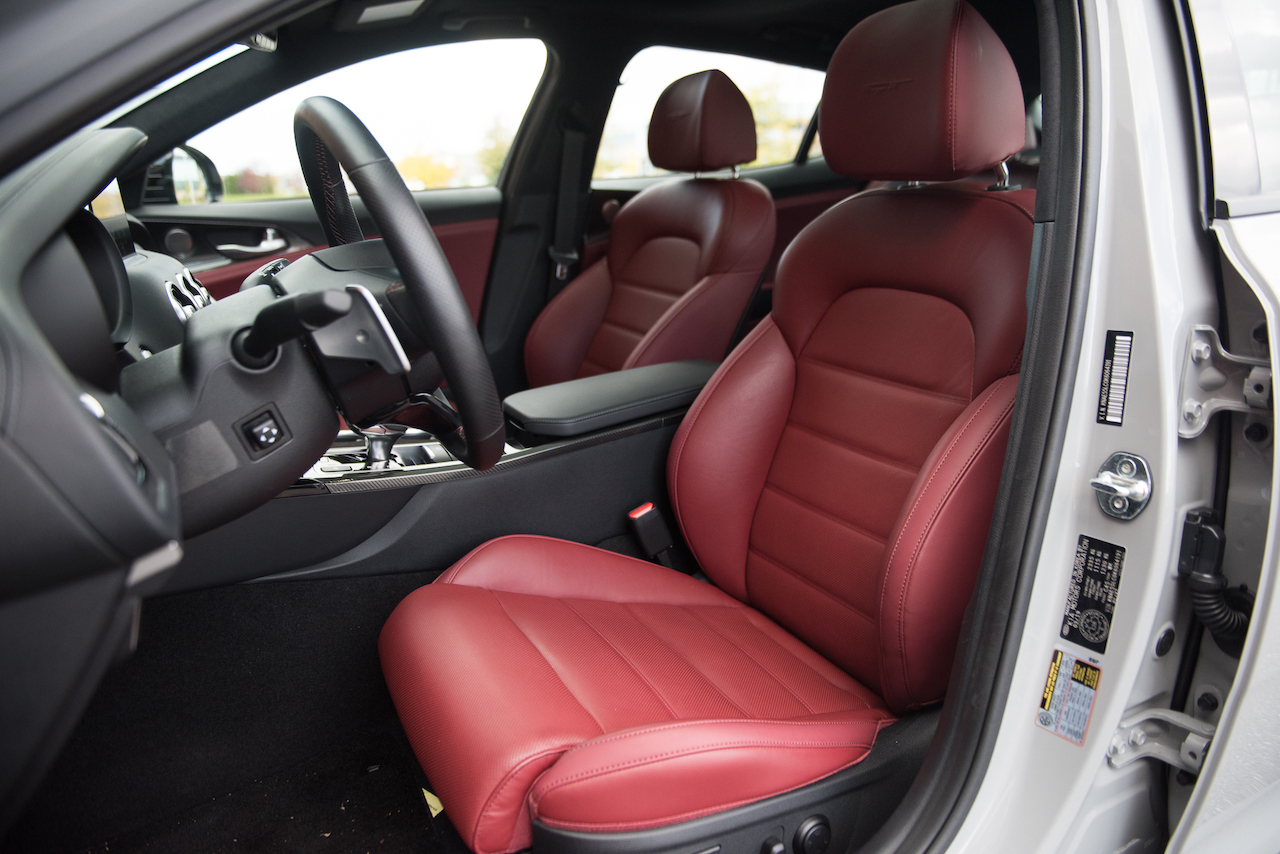 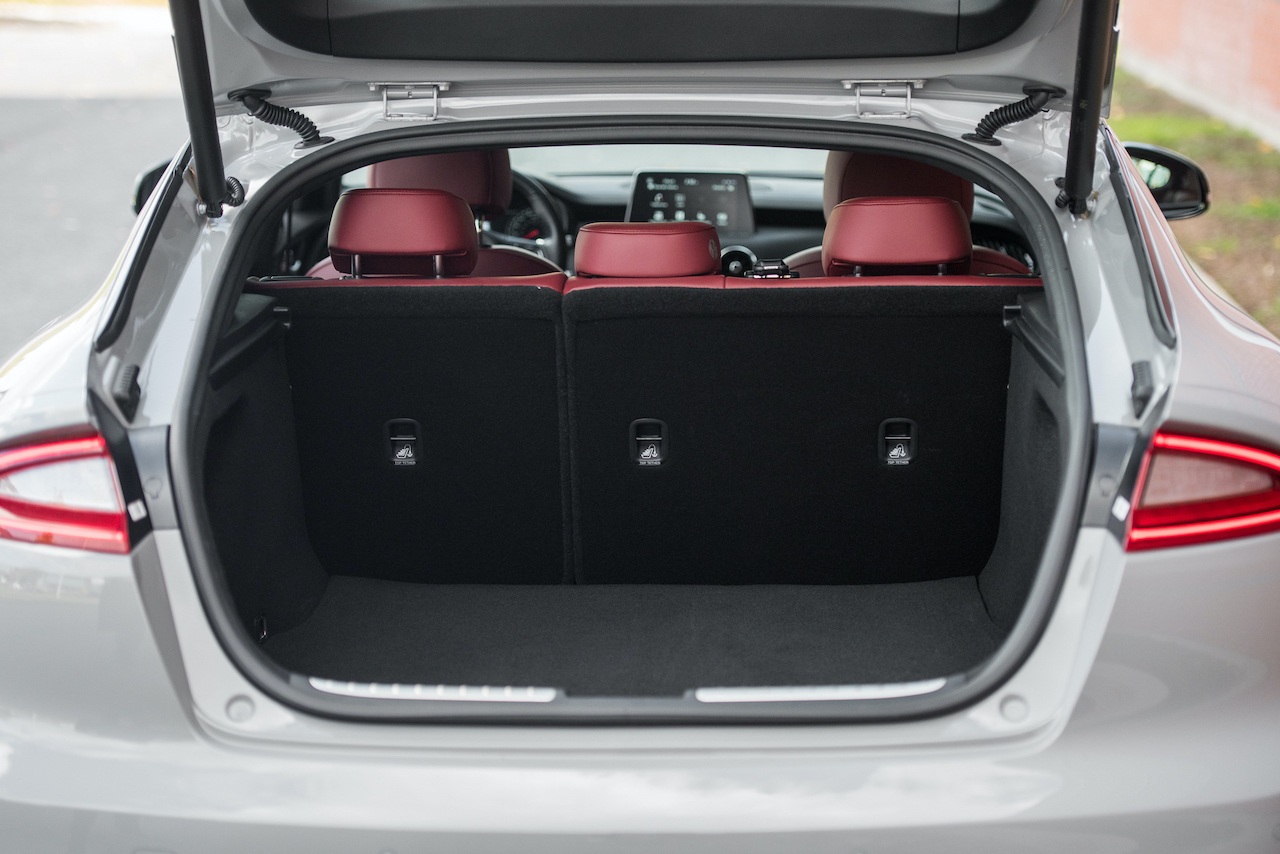 So, on paper, you tend to wonder why anyone would get an SUV over this. Not only is the Stinger just as practical as some of those lifted contraptions, it’s also all-wheel-drive, which makes it a wonderful daily driver.

Actually, that’s the Stinger’s best asset; daily driving. While quick and immensely capable thanks to a wonderfully well calibrated chassis and impeccable road manners, its softer suspension tuning and considerable weight (4,157 lb / 1,885 kg) force it to be more of a grand tourer than an actual sports car, hence the name: Stinger GT.

This, of course, was done on purpose. Kia claims that the Stinger was never intended for outright power and hard-edged dynamics, but rather for a comfortable and graceful ride. And that’s exactly what it offers. Seats are lavish and immensely comfortable; special mention to the super-soft head-rests, which could downright be used as pillows.

Cabin noise is kept low, and we’re happy to report Kia has finally fixed the irritating trunk rattling issue that plagued the early cars. Overall, the Stinger feels heavy and stable on the road, making it an ideal roadtrip car that can haul four adults and their cargo in utmost comfort. 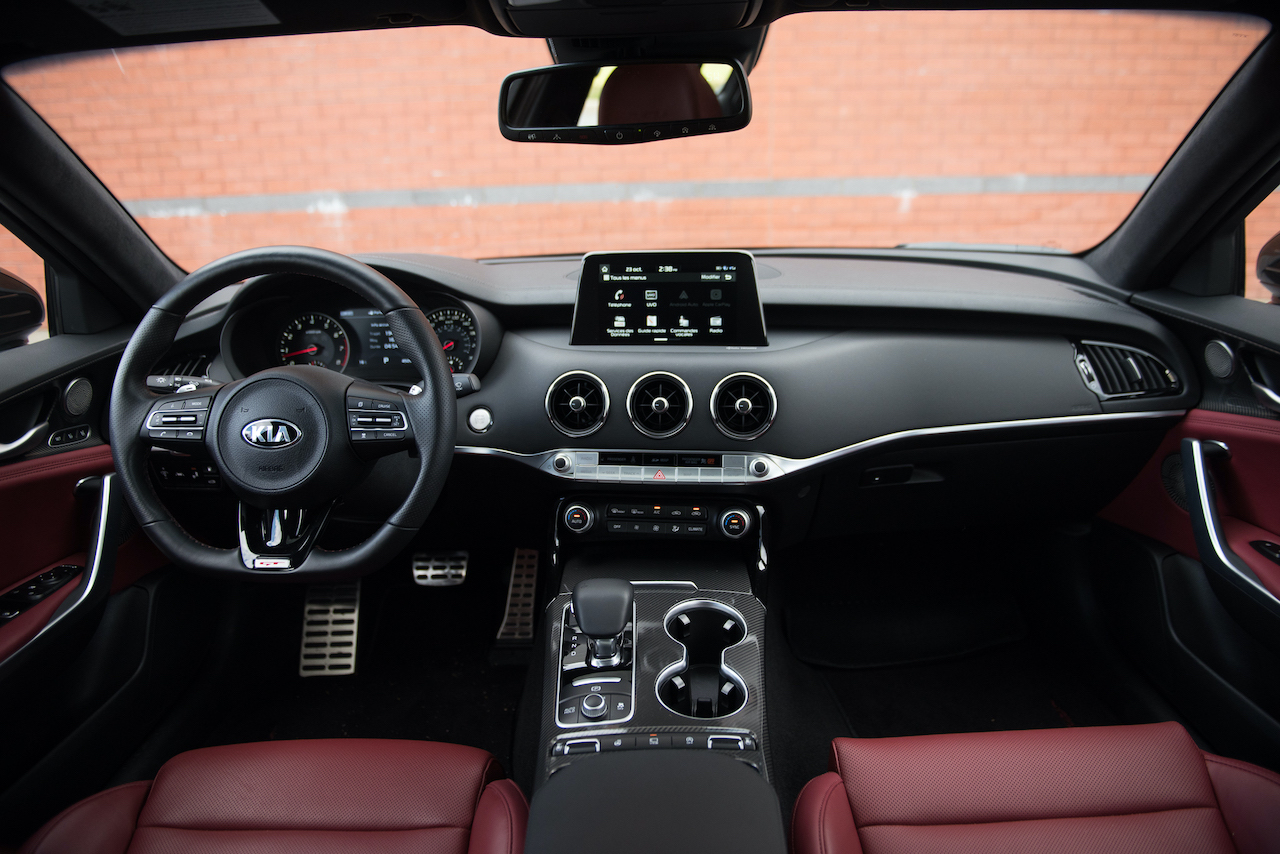 But that’s not to say it can’t hustle in the twisties, because it can. While suspension tuning is noticeably plusher than in a G70, the structure itself is rock-solid, with vague but quick-reacting steering and impeccable throttle response from the turbocharged V6.

Power comes in strong and low down in the rev range, remaining constant all the way to redline. Shifts are crisp, and the available Brembo brakes bite hard to bring this big sedan back down to legal speeds within seconds.

We did, however, notice a tendency for those brakes to fade quickly when pushed hard, and we’re not big fans of the artificial engine note which buzzes digital intake sounds through the cabin, sounding as if the car is lamenting itself. The good news is that all of it can be dialed down through the vehicle’s infotainment system.

That, systems and controls, is a thing the Stinger does better than many of its German or even American rivals. Information is well-laid out on clear, easy to read gauges and interfaces. Menus, both within the infotainment screen itself and the gauge cluster, are easy to comprehend with all-out common sense and large, effortless fonts. Even the neat little drive mode selector located by the gear lever makes cycling between its available drive modes – Comfort, Eco, Sport and Smart – a walk in the park. 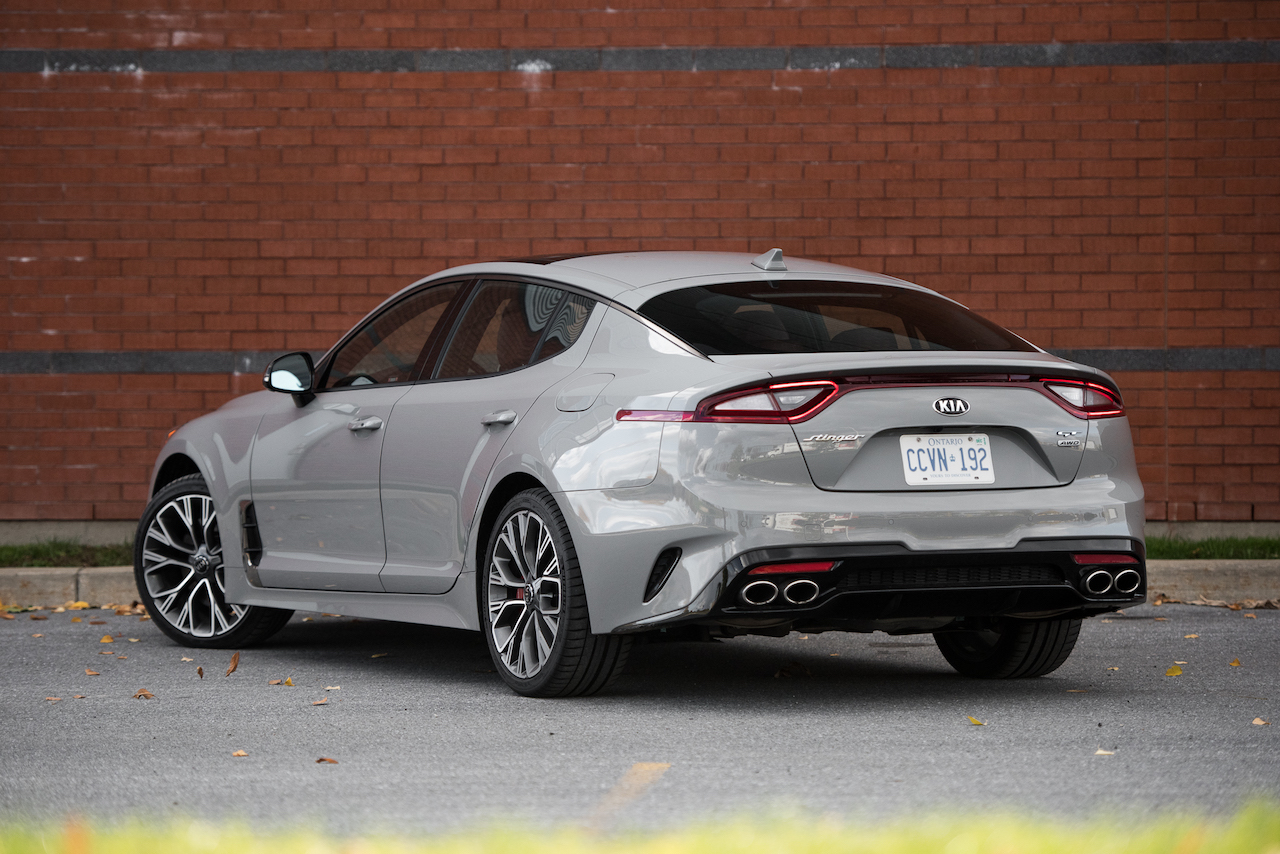 So yes, the 2019 Kia Stinger GT has a lot going for it. It looks unique, drives impeccably well, and will even hunt down a BMW 3-Series down a backroad if you let it, all while fitting your mountain bike in its trunk.

Except for some flimsy fake hood scoops glued onto its hood and a sloping roofline that punishes rear passengers who happen to have long torsos, we can’t see any reason to not recommend this car for someone seeking a different yet very accomplished performance sedan. Even if it’s the unpopular choice, it doesn’t mean it’s a bad one. 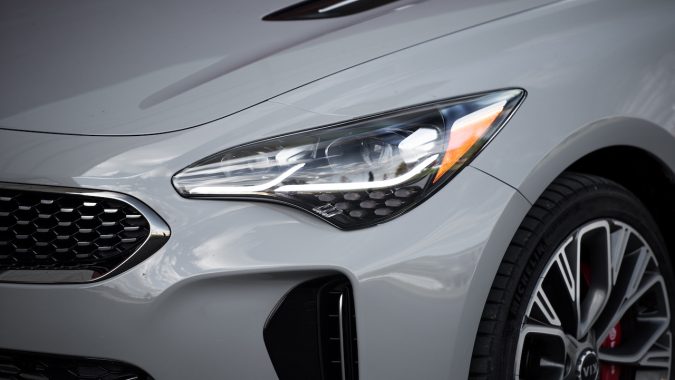 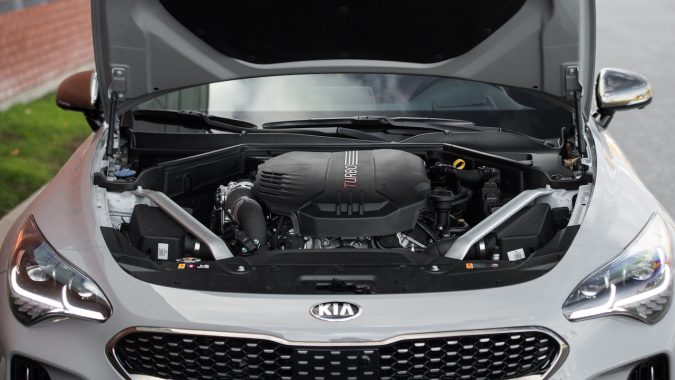 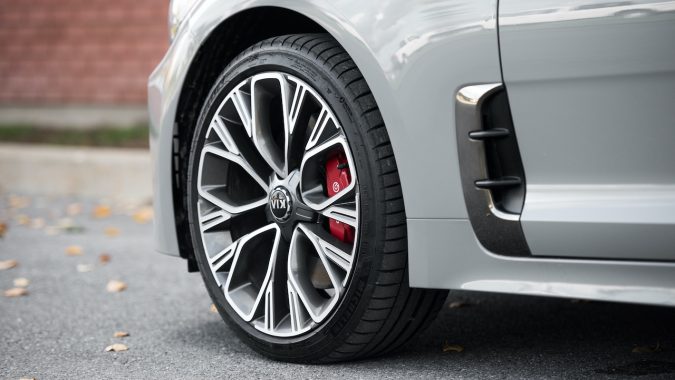 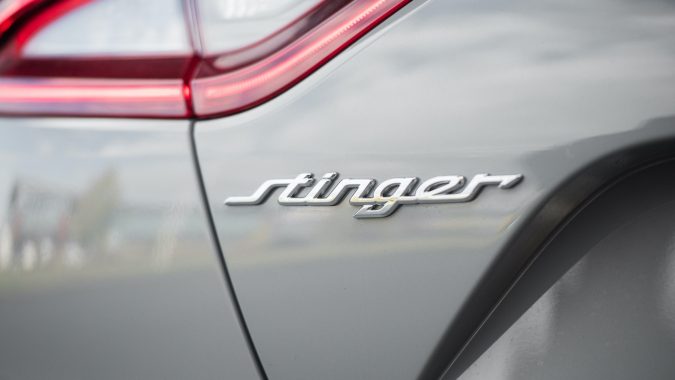 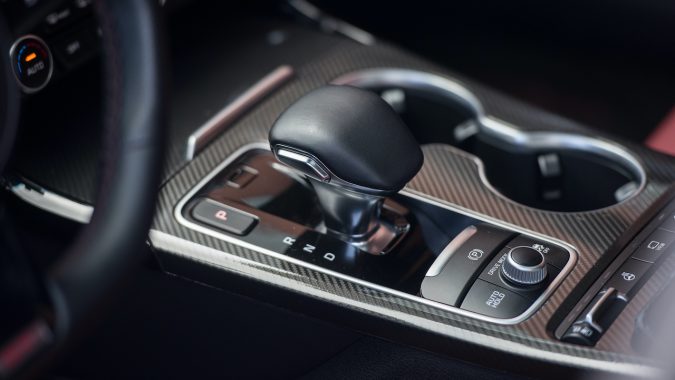 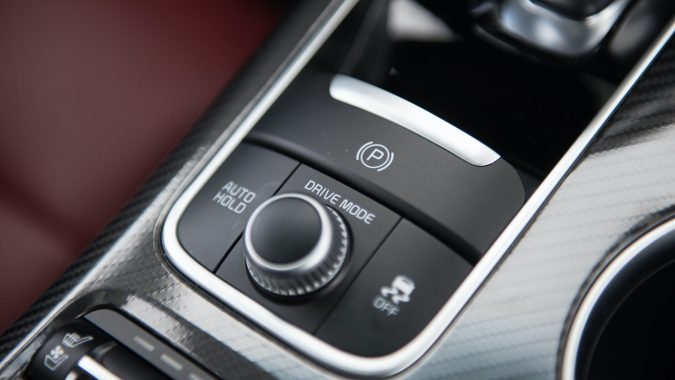