MOAB, Utah: The angle seemed a little steep, considering that I could only see sky through the windshield.

I craned forward to at least catch a glimpse of the spotter’s hands gesturing towards the right.

“Driver right,” the walky-talky emphasized as Nina Barlow of Barlow Adventures coached my Jeep across the stepping-stoned slope.

I added throttle, the engine growling above the “tuk-tuk-tuk” of straining wheels and joints, the suspension shuddering, tire treads alternatively slipping and gripping rock ledge edges interlaced with ice and snow.

Sheesh, I flew south for this? 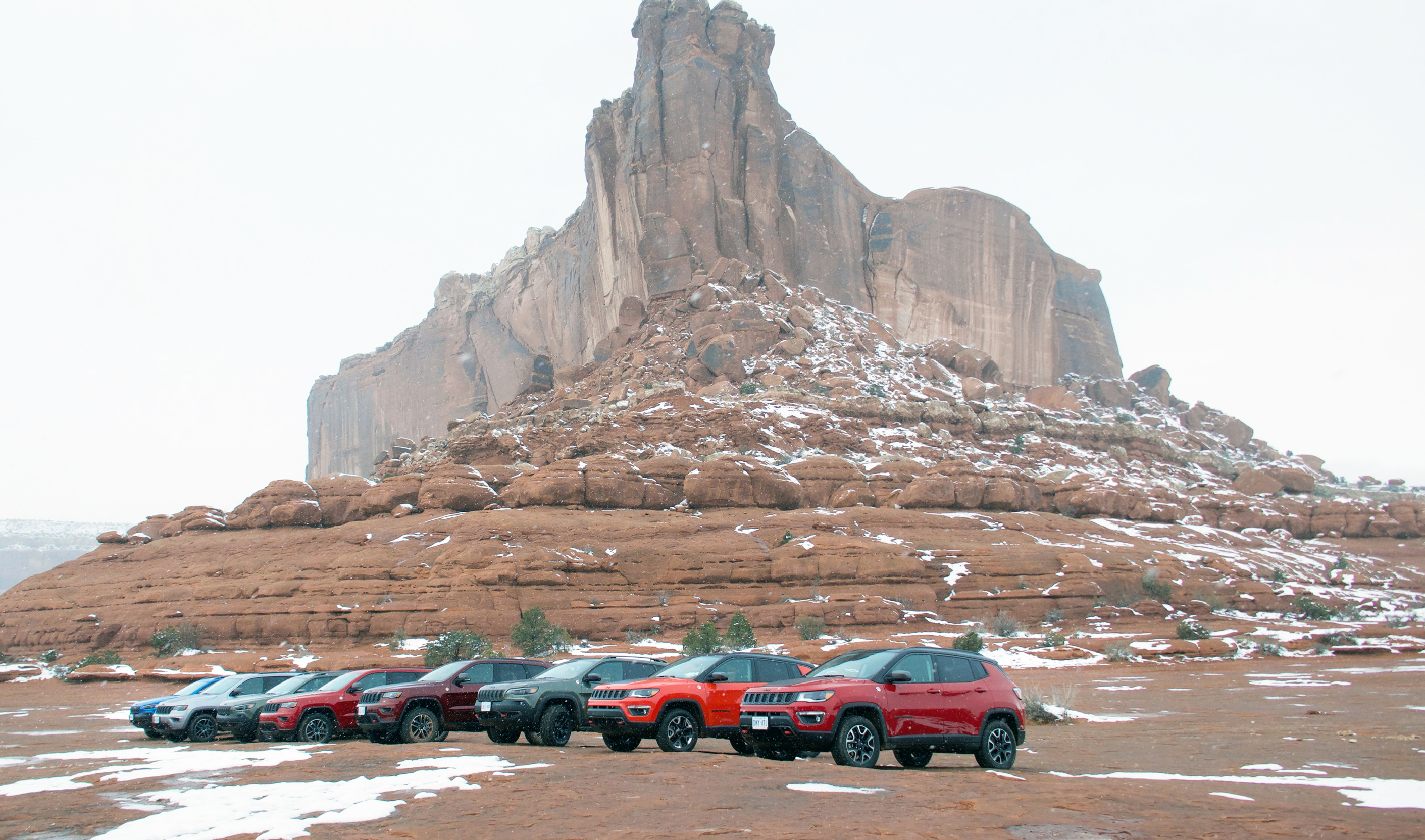 Moab, Utah may be a Mecca for off-road adventurers but the town lies dormant, almost dead in December, with rental Jeeps tarp-wrapped for the season, shops shuttered and streets nearly deserted.

The snow, although not rare, came early and was lingering longer than usual, engendering jokes about suitable conditions for Canadian automotive journalists.

But winter’s added degree of difficulty made for even a better test for a convoy of Jeep Trailhawks heading to the Seven Mile Canyon trail.

Think Jeep and you probably picture the storied four-by-four that evolved into today’s Wrangler – a capable off-road, all-weather warrior in any trim level.

But to broaden brand appeal, Jeep created offshoot lineups of “lux-utes”, “soft-roaders” and “sport cutes”, call them what you will – crossovers and SUVs of varying shapes and sizes, some starting with simple and very un-Jeep-like front-wheel drive powertrains.

These models – the Renegade, Compass, Cherokee and Grand Cherokee – also come in varying degrees of “Jeepness” depending on trim level and powertrain choices, so establishing a Trailhawk set of criteria raised the bar back up to determine a “Trail Rated” level of off-road ability. 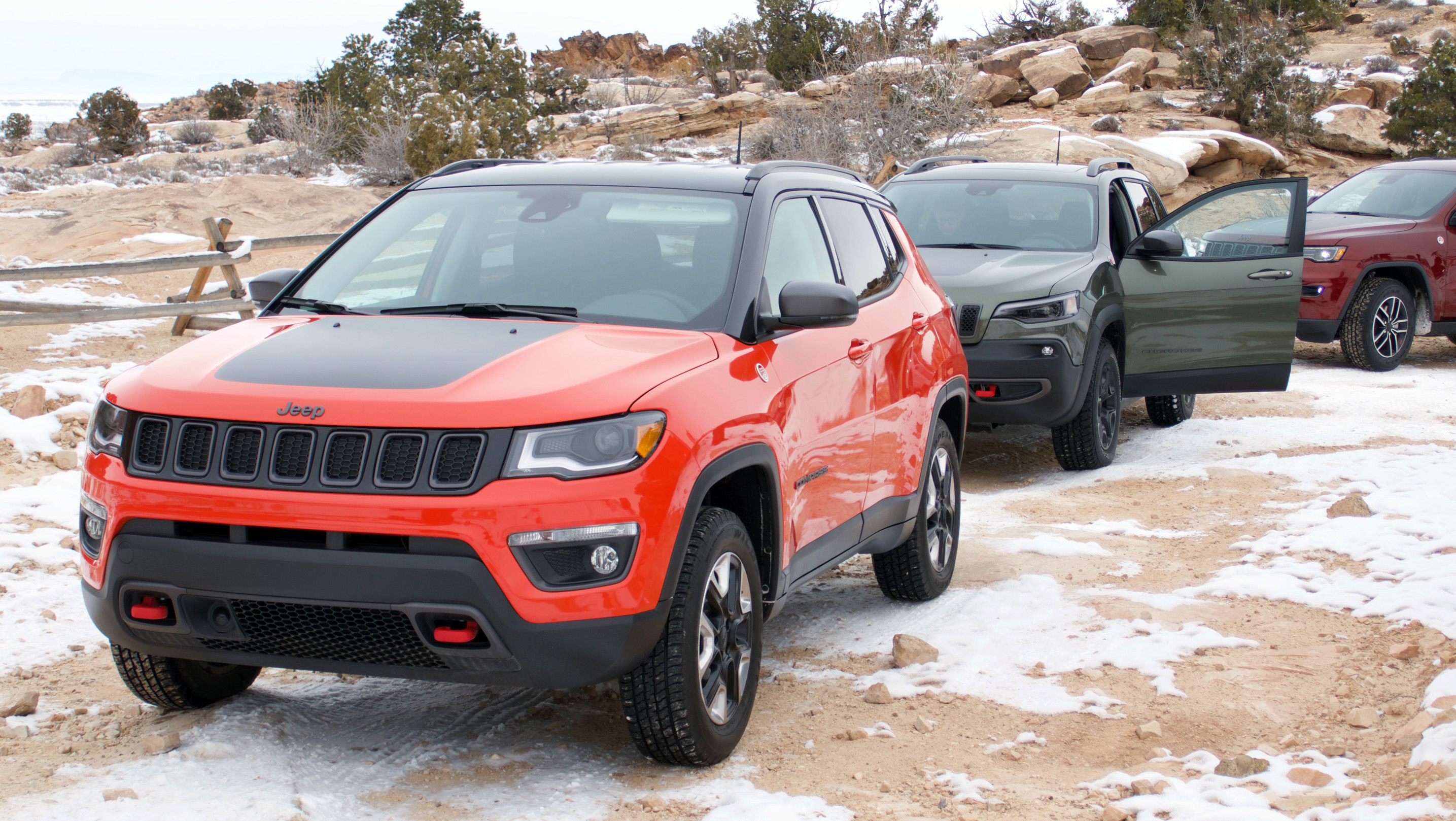 The Renegade, recently revised with a new 1.3-litre turbo powertrain was not available for testing yet, but we could drive 2019 Trailhawk versions of the Compass, Cherokee and Grand Cherokee to experience the five factors stressed to earn Trail Rated and Trailhawk badging – traction, ground clearance, articulation, maneuverability and water fording.

There’s not enough room here to get into all the engine and tranny details on each of the three powertrains but our off-road focus was on a variety of Jeep 4WD systems that help put the power to the ground.

The Compass (and Renegade) uses an Active Drive Low system with torque management and a 4WD Low mode. The Cherokee has the Active Drive Lock system that includes a locking rear differential for added capability while the Grand Cherokee tops out with a Quadra-Drive II full-time 4X4 system with transfer case and rear electronic limited-slip differential.

These are all handled by Selec-Terrain traction management systems that, depending on the model, allow drivers to choose from Auto, Snow, Sport, Sand, Mud modes and, exclusively in Trailhawk models, a Rock mode for serious off-road challenges. Special all-weather or all-terrain tires add to the traction package.

Unique front and rear fascias improve approach and departure angles while additional electrical and body sealing, along with a raised air intake handle the challenges of river-fording or flood conditions. And there are more specific tweaks varying each model that are worth further investigation by curious buyers. 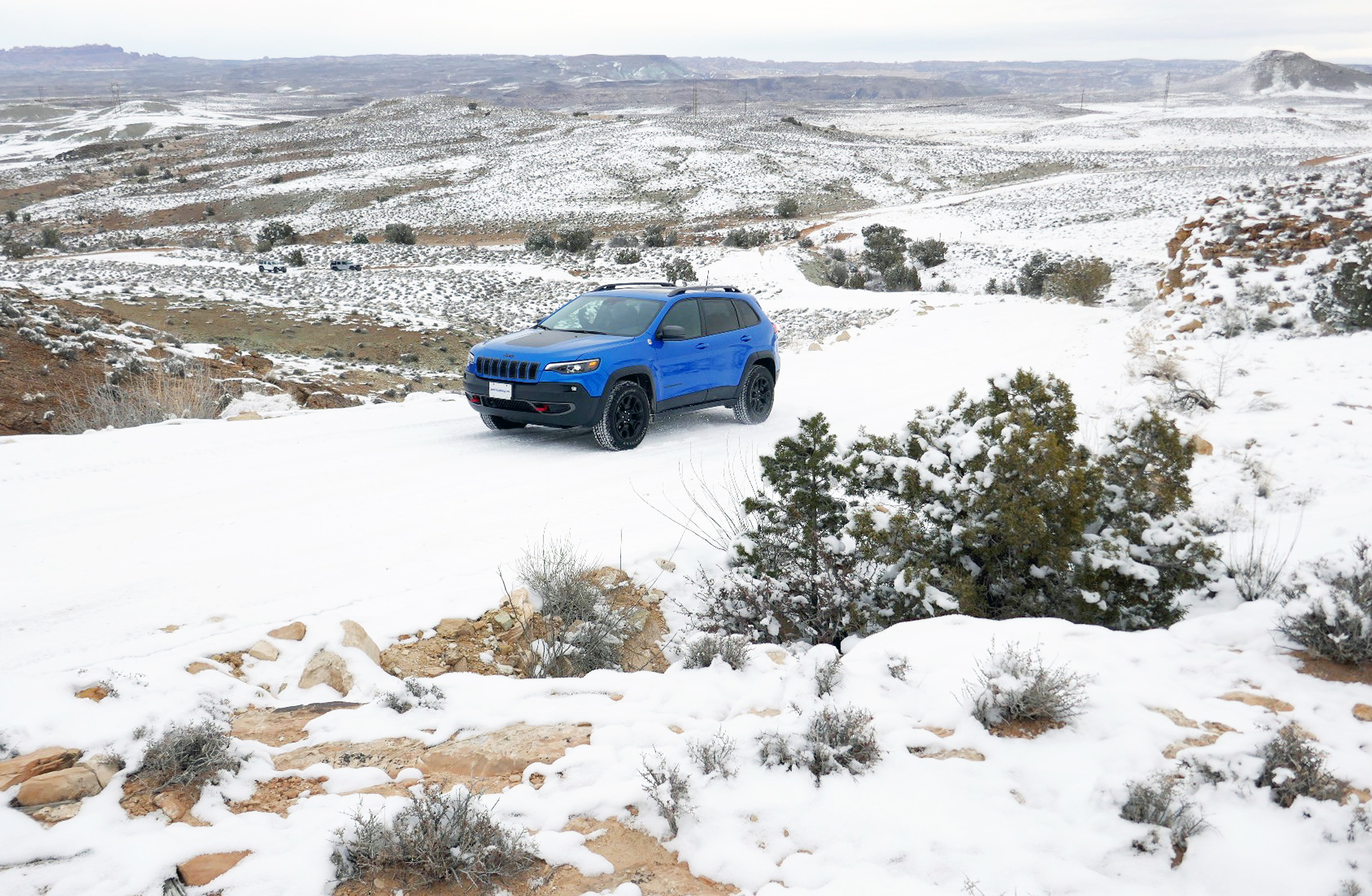 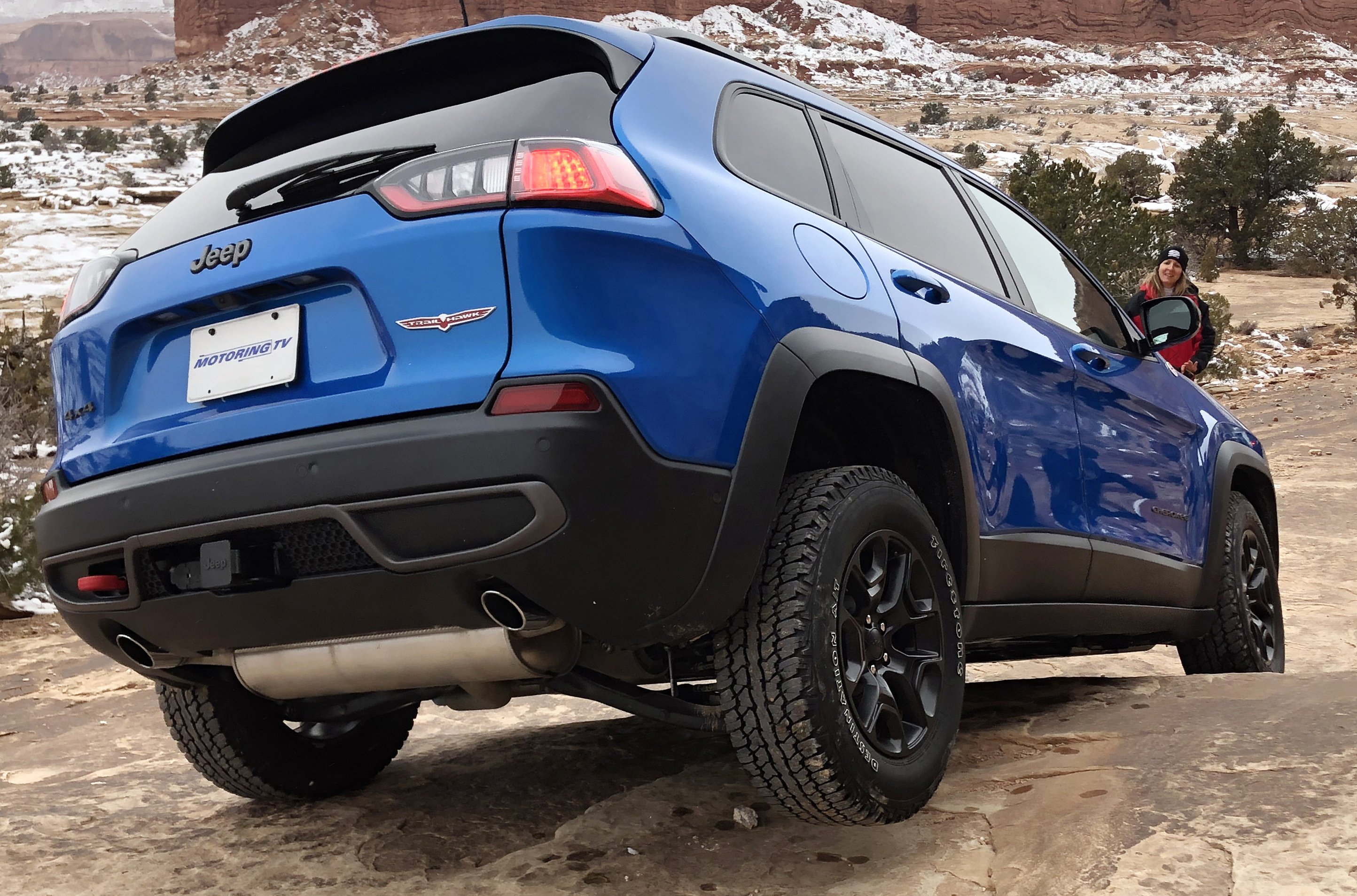 While water-fording never quite came to play in our drives across small semi-frozen streams and desert washes, we grew appreciative of other Trailhawk improvements whenever we were approaching a steep climb or descent, watching a preceding vehicle’s suspension jump and bump over rocky ledges, grimacing at the thump of an unseen rock against the armoured undercarriage, cycling through the variety of modes or simply slogging along soft trails of sand or unexpected snow.

There was a reason why Canadian automotive journalists were testing the Trailhawks that seem to be especially relevant to our market. While Americans tend to opt for Trailhawk models between five or ten per cent of the time, Canadian Trailhawk take-rates grow from five per cent for Grand Cherokee to 20 per cent for Renegade, 30 per cent for Compass and an impressive 40 per cent of Cherokee models.

Yeah, we can probably blame that on our snow. 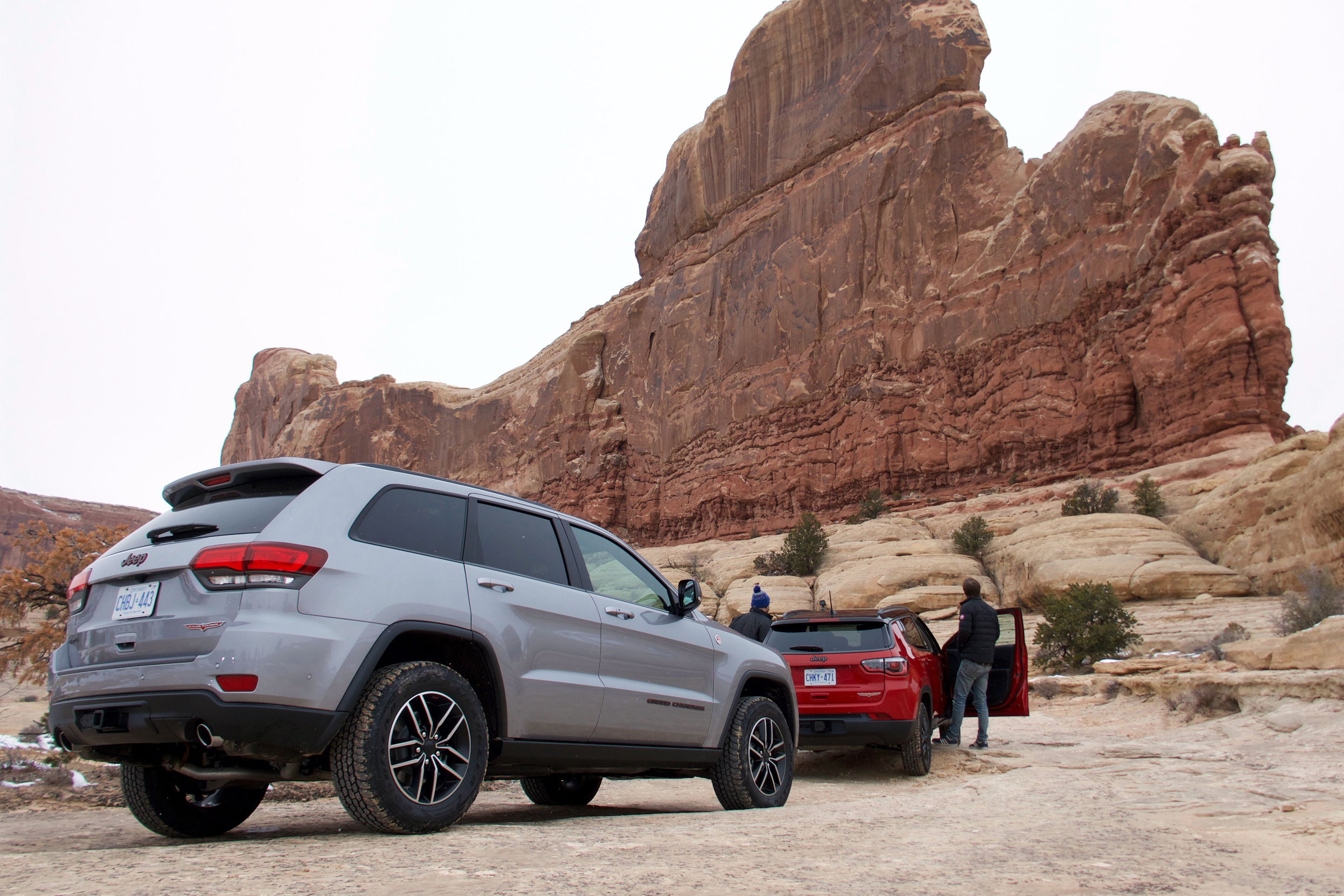 And it’s possible that the Trail Rated badging and abilities, the secure confidence of all-weather, any road, every condition driving, gets a boost from a styling package that loses most of the chrome for body-coloured or blacked-out accents, the black anti-glare hood decal and unique fascia snouts accented with Trailhawk-specific Ruby Red tow hooks.

And while it may be true that Canadian customers will never truly put their Trailhawks to the test, limiting them to occasional country lanes and cottage runs, it’s good to know that their Trailhawk has already passed a barrage of off-road demands. 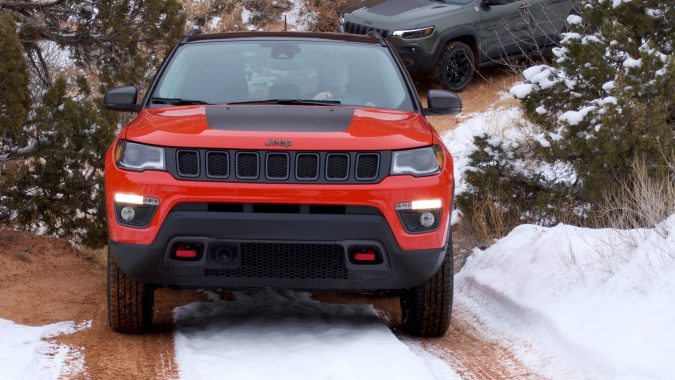 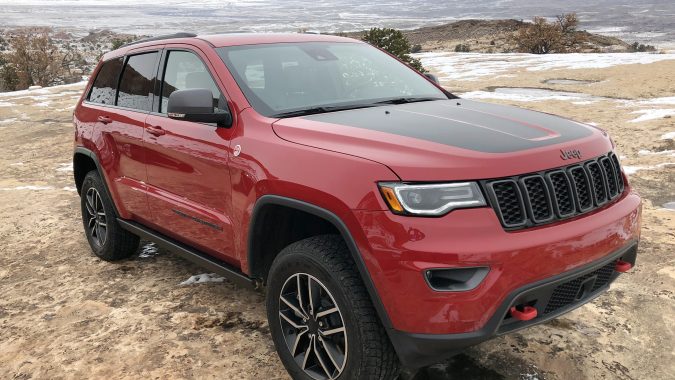 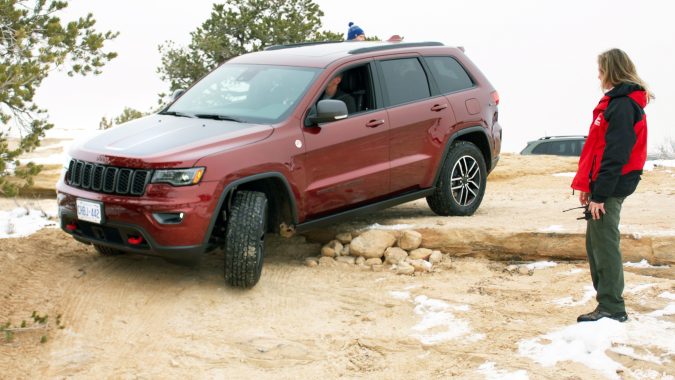 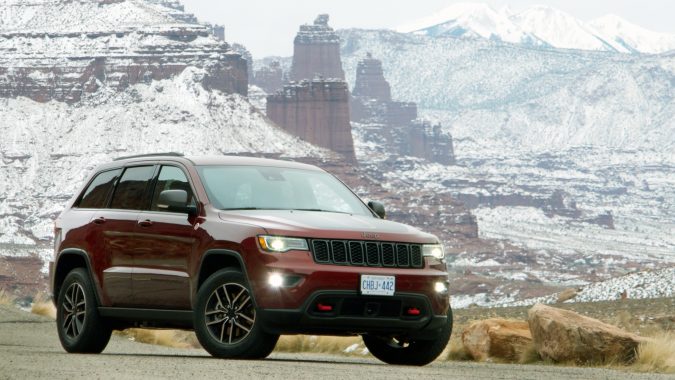 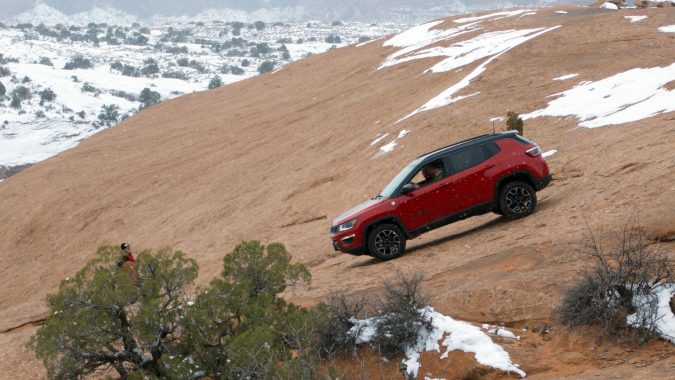 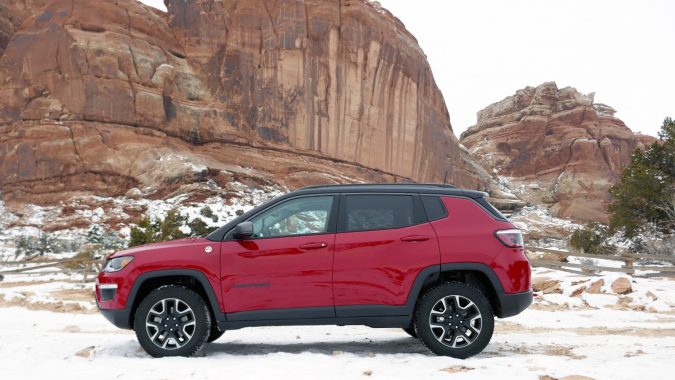 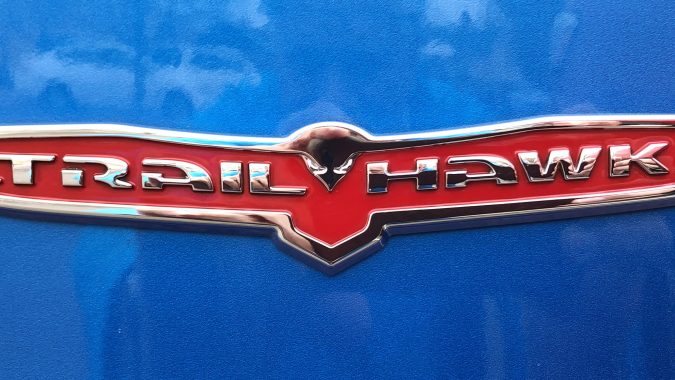