That’s not exactly how the conversation went when I walked into the clubhouse of the Backcountry 4×4 club, though by walked into the clubhouse I mean sat down at their table at Tims. But it’s not far off, and I bet it’s what they were thinking. Sure that’s a Jeep badge on the boot, but it’s not a real Jeep, is it? If you try and take it down a trail, well, it’s just not rated for that, is it?

Jeep’s recent explosion of sales is based in no small part on their image. Which comes with the promise of ruggedness and off-road capability. So is that limited to just the big mean ones, or can even the lesser models take you further off road than you’d think to take your compact crossover?

Spring for the Trailhawk and you get more ground clearance. Which also gives you more approach and departure angle. But even without the 1-inch lift, my North trim offers reasonable clearance for rocks and hills. It doesn’t offer up the locking rear differential of the Active Drive Lock AWD system, and my tester doesn’t have the low-range transfer unit of the Active Drive II system, but it does have the ability to send power to the rear wheels. And it was this system I was going to test out. Because in mid-February in Canada, there’s not much mud to be found or rocks to crawl over. There’s plenty of ice and snow though. And that’s what I’ll be traversing. 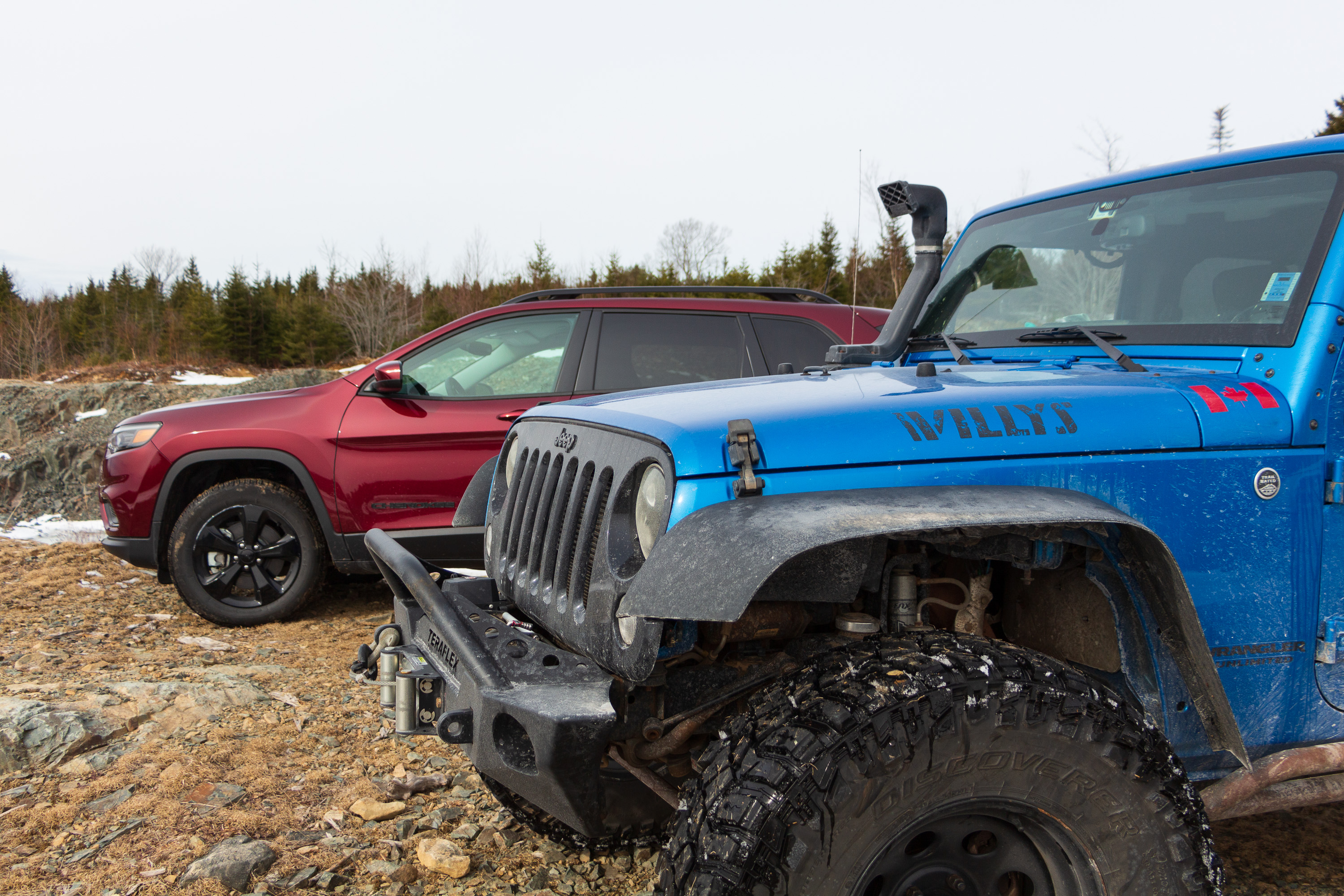 Sitting at the start of a pipeline access road, I’m a little nervous. Not about the capabilities of the Cherokee, as much as the hardware I’m looking at in front and behind me. A lifted JK Jeep with a bumper thicker than my arm and tires that are nearly as tall as some sports cars I’ve driven recently. A Series I Land Rover with an engine swap. And a host of Toyota Tacoma pickups with modifications ranging from mild to rock-jumping wild. I’m confident, though, because the group promised me that while I might get stuck, I won’t need to worry about adding new stripes to the sides or undercarriage of this shiny new Cherokee.

Ice and snow fill the worst of the dips in the track, but this is hardly a smooth bit of single track. The Cherokee’s suspension is on the softer side when you’re on the highway, which means that when you hit bumps, thumps, and hunks of ice, the softness absorbs them. Where I can see drivers in front and behind me pinballing off of door frames and center consoles, I’m sitting in relative comfort. The heated steering wheel and seats doesn’t hurt my comfy level either.

It’s soft, but not so soft that I’m bottoming out the suspension travel when I come down the other side of the lumps. It feels comfortable and composed. Though the anti-roll bars limit suspension articulation enough that it’s easy to end up with a wheel in the air.

At this point, we’ve been plodding along for a good 20 minutes. Which means I think I’m an expert and ready to show off. So when I see a steep hill that’s covered with a solid sheet of ice, I wave for the rigs behind me to back off. Drive about halfway up and I come to a halt. Let’s really test out this all-wheel drive system. I’ve got Snow mode, Mud mode and Sport mode. I’m not sure which one is for ice and the owner’s manual is way over there in the glove box. I have a decision to make. 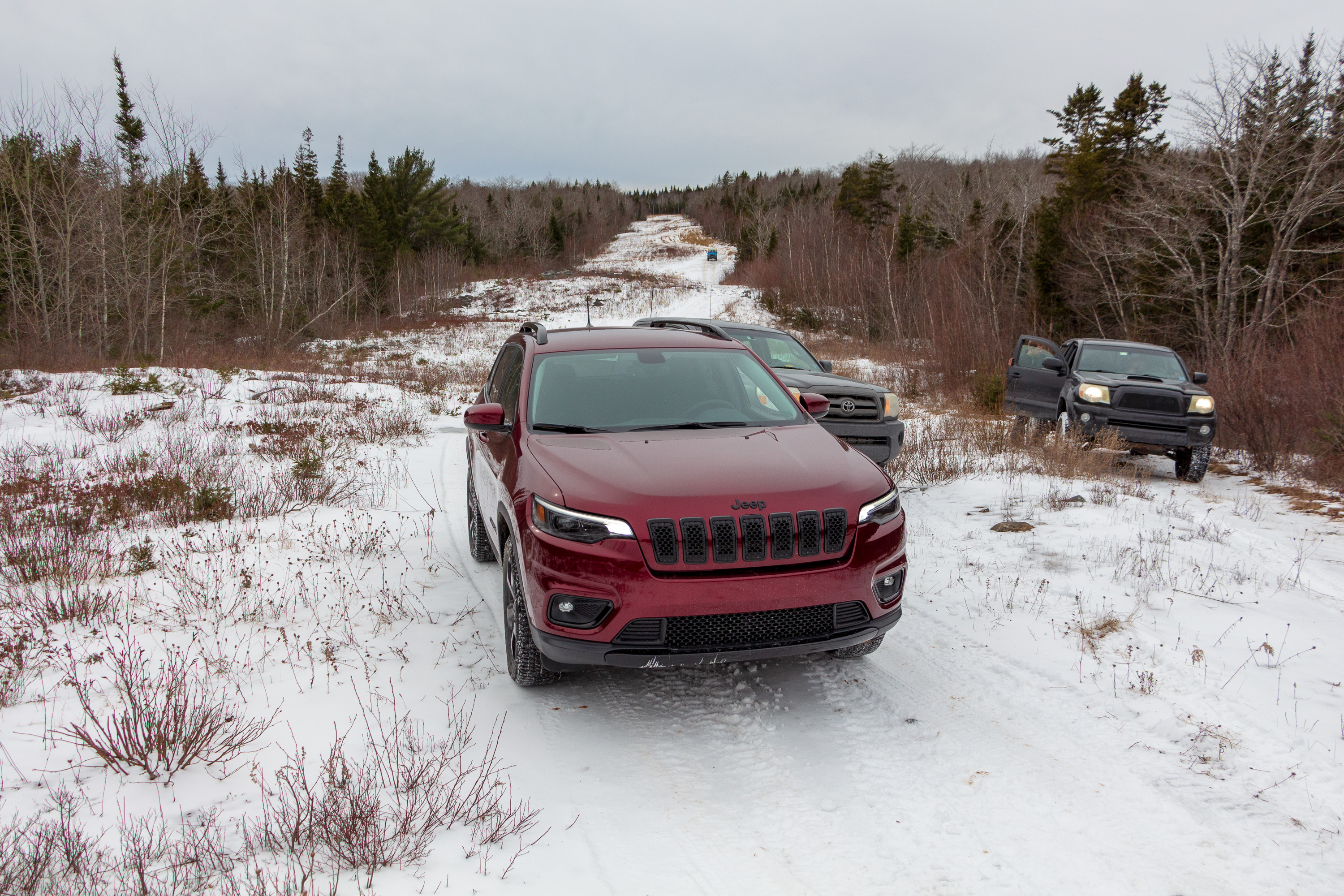 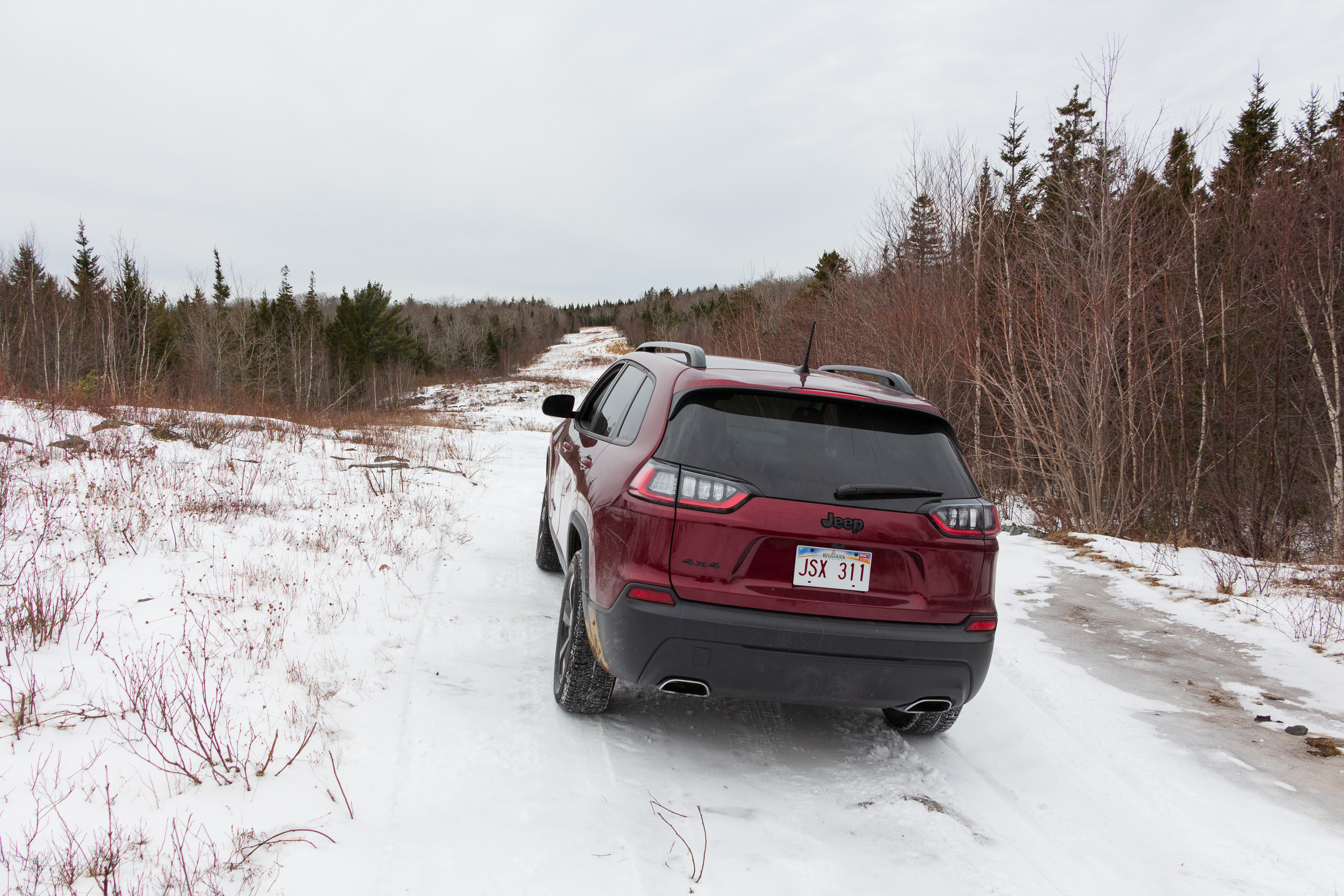 I want to go fast, so that sounds like Sport mode. Turn the Terrain Select lever, wait for the cool dash icon to change, and mat the gas. The front wheels start to scramble, torque gets sent to the rear, and I’m now driving up a hill I couldn’t have crawled up on my hands and knees. Put me down as impressed. Which means I have another go. And another go. And maybe another go again.

Some of that credit goes to the tires. My Jeep is wearing Michelin X-Ice winter rubber which laughs at the low-grip surfaces. And if you’re wondering if low-range can make up for picking mud or all-terrain tires, the pickup behind me that had to back up and run at every hill thanks to meaty off-road tires will agree that rubber is very important. Still, the Cherokee system’s ability to move power around made it very sure-footed on both the icy hills and then shale slopes I scrambled up later. Almost as important when you’re off the beaten path, these are 65-series sidewalls meaning there’s plenty of rubber there to absorb impacts, protect the wheels, and prevent the tire being pulled off the wheel on obstacles.

The Cherokee saw a big refresh this year. With new styling that added larger headlights. The interior gets some new finishes and materials as well. But the biggest change was underhood. For 2019, Jeep added a new 2.0L turbo four to the equation. 270 hp and 295 lb-ft of torque, backed by a nine-speed automatic. In a crossover that tips the scales at right around 1,800 kg, this is a bit of a hot rod Jeep. This little rig is one of, if not the most powerful crossovers in-class and is it ever zippy.

Jeep’s North trim is a bit of a throwback too. To the days when you could get the big engine without adding all the extra luxury bits. 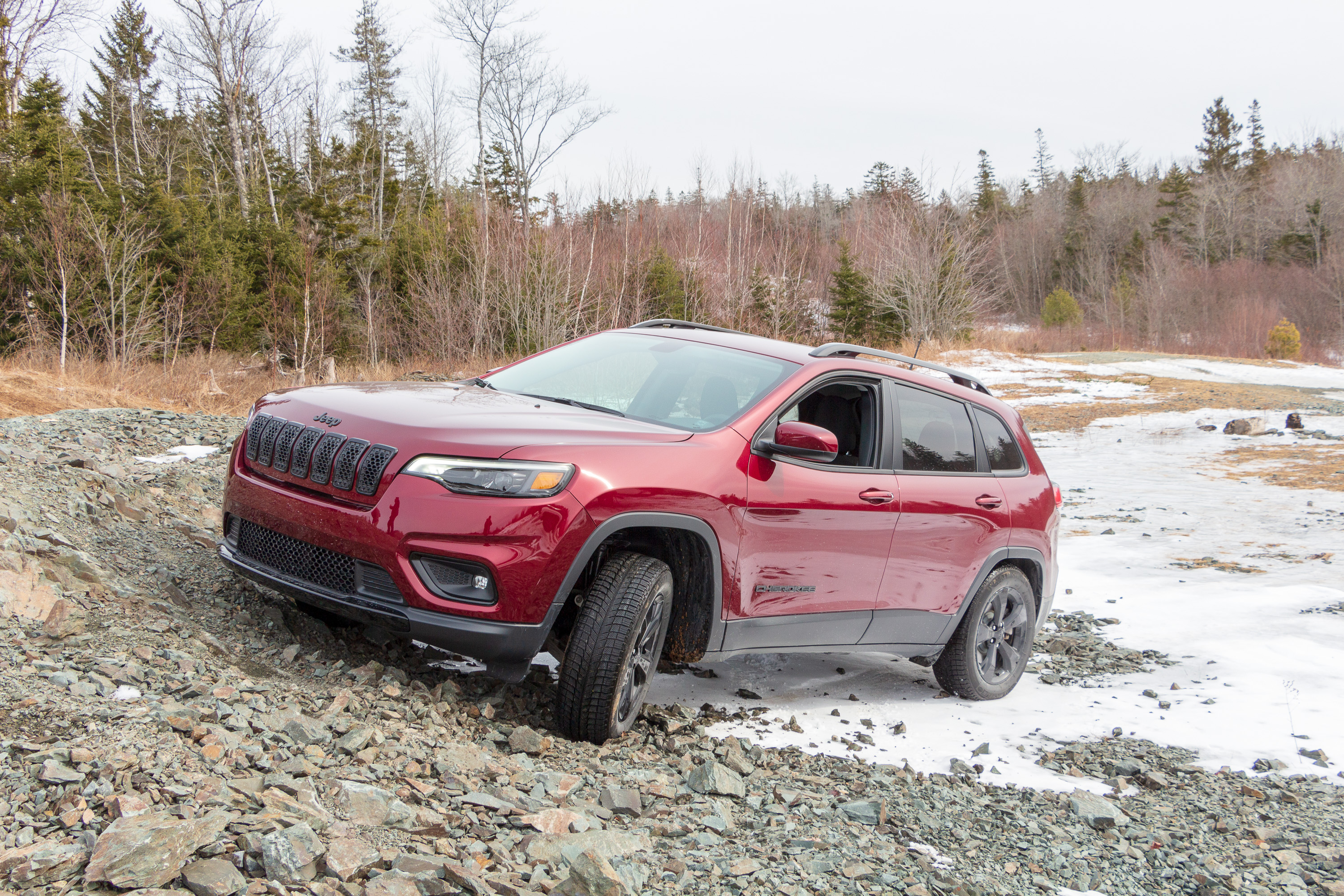 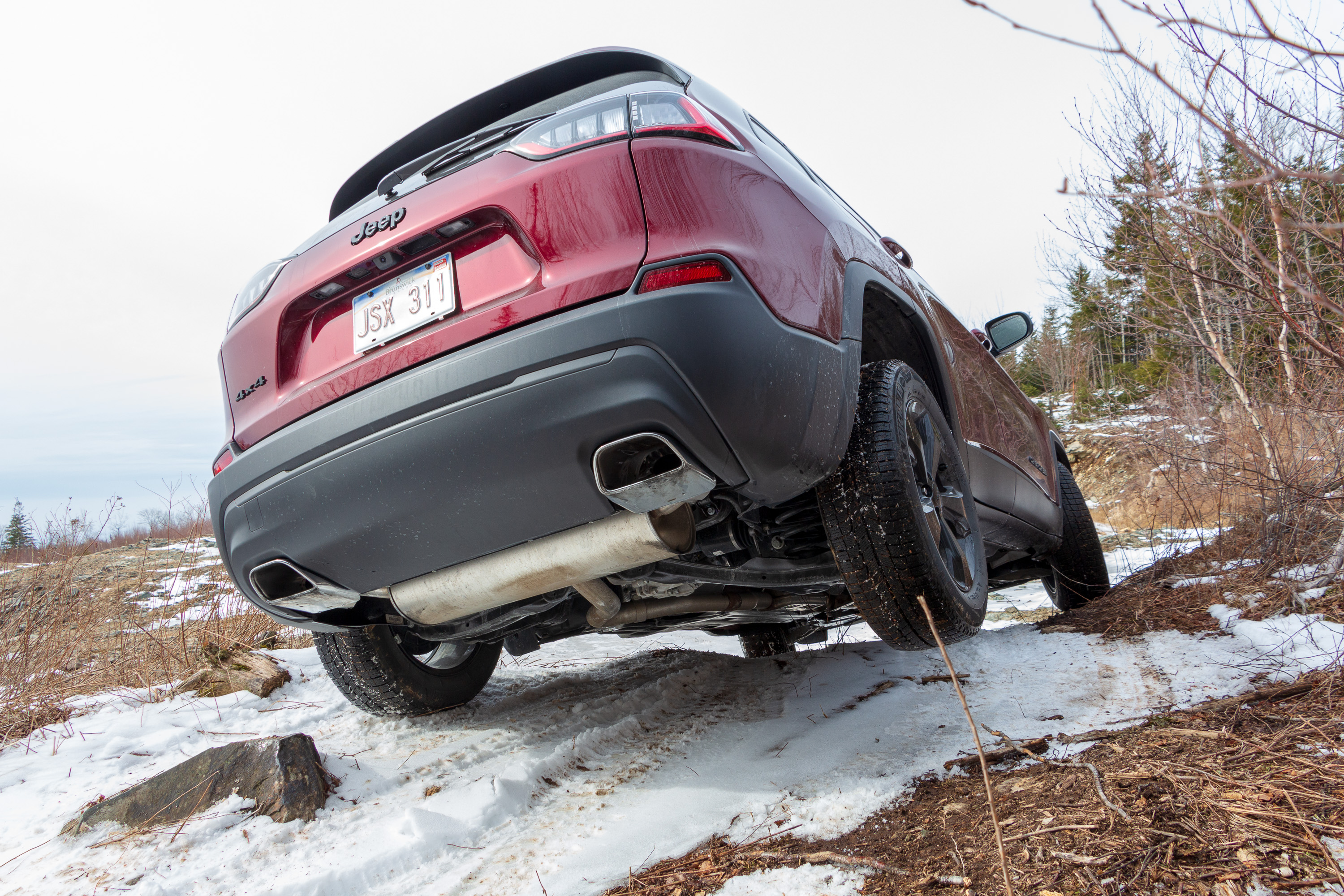 Want the most powerful engine on the second-lowest spec vehicle? No problem. Want two, four, or four-low? Just tick the box. And a heated steering wheel plus heated seats without the headroom-eating massive panel glass roof? Sure, we can do that. You can add the active safety tech on, but if you don’t want the gadgets, you don’t need them. It’s an impressive level of only getting the features you want by modern standards, and in an era when the biggest choice is often which shade of grey paint you want (out of the six on offer) you have to give Jeep some credit.

As much fun as all the power is on the highway, and probably in the sand, it’s not so great when you’re crawling. When easing over a ditch or lump or large rock is the task, you need smooth control. Ease on a touch of power, release and gently caress the brake pedal. With this engine, even locked into gear 1 or 2, smooth isn’t an option.

Without low-range, it doesn’t have enough torque to crawl up and over. You need to use the gas. So you apply the gas. But it needs a bit more power still, so you give it some more right pedal. Now boost builds and all of the power arrives at once. You rocket over the obstacle instead of easing over it. Then the power decides it’s having fun and wants to stick around for a couple of seconds. Which means a firm jab on the brakes is needed, which pitches the nose down and your face forward.  Then you end up skidding on the rock or dirt or ice, which could make things a little more interesting than you want. 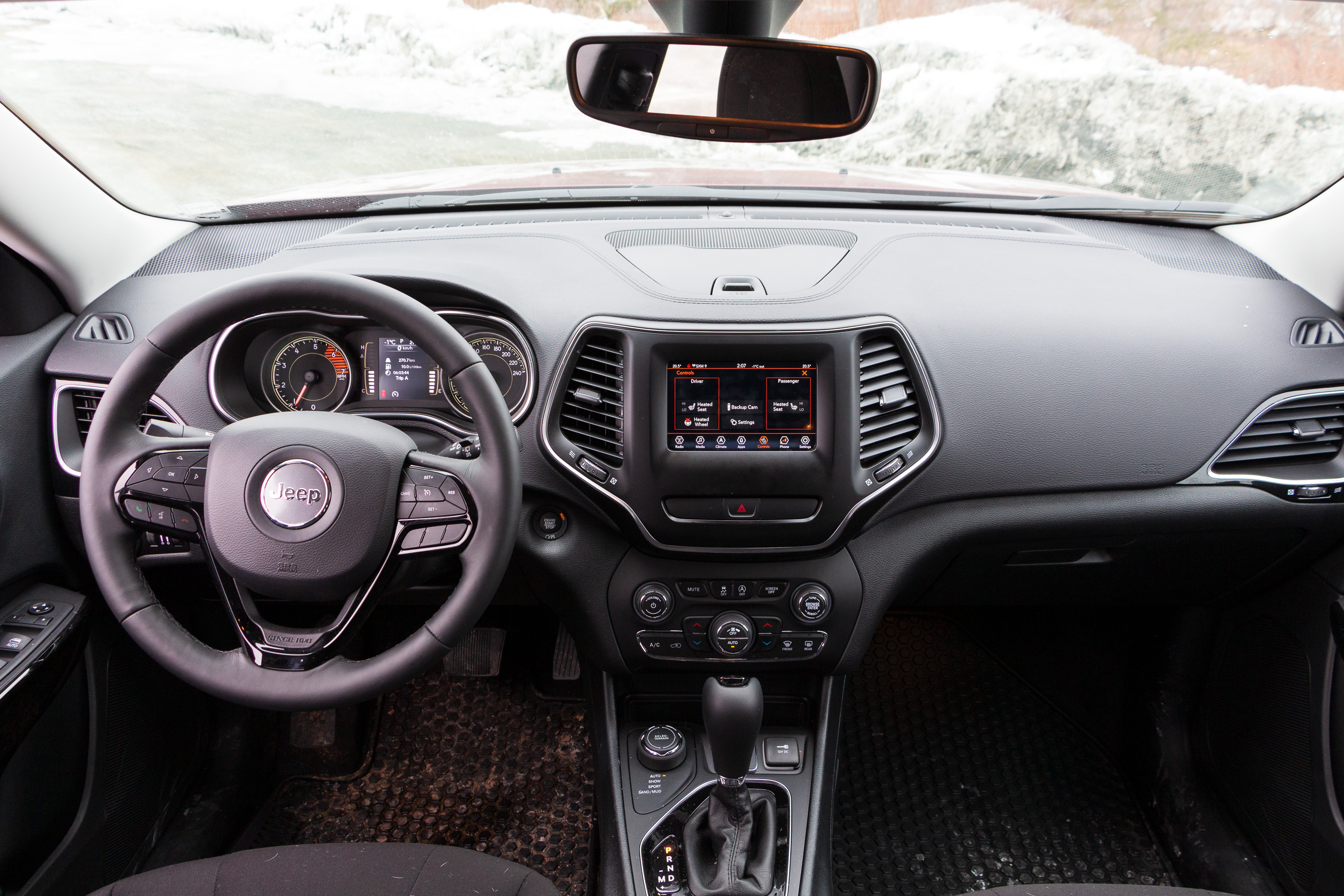 But this isn’t a rock crawler, and it’s not intended to be. So maybe that’s not a fair criticism. What this Jeep does is let you drive easily down that rutted track to the cottage. Or through an old logging road to get to that sweet hiking spot or mountain bike trail you’ve heard about. Keep it on something that may have resembled a beaten track at some point, and it’s happy to oblige with composure and poise.

It keeps those traits on the highway when conditions get bad. Early morning airport run on vaguely plowed highways that alternate between moderately deep snow and slushy ice? The Jeep shrugs it off. “My big brothers can handle the Rubicon, so what’s a little ice and snow for me?”

Sure it’s still more of a soft-roader, but it’s one that’s more capable than you might think.  Enough to earn that seven-bar grille. And when you’re back on the pavement, that four-cylinder can give you a whole lot of clean-road fun too. 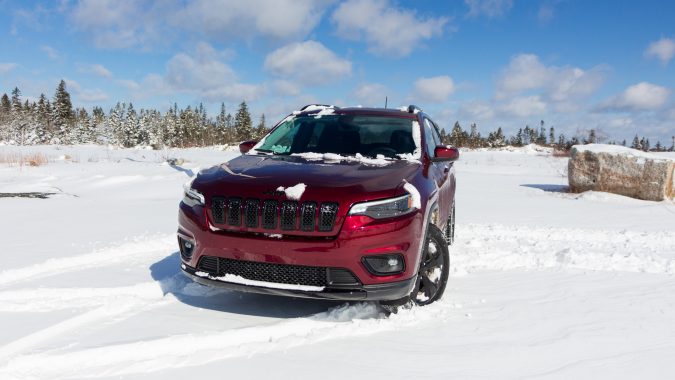 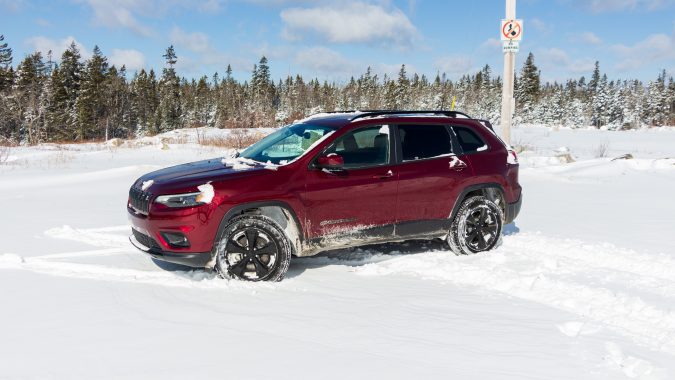 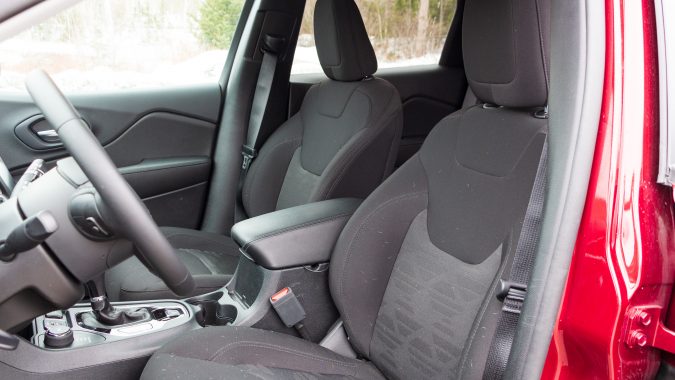 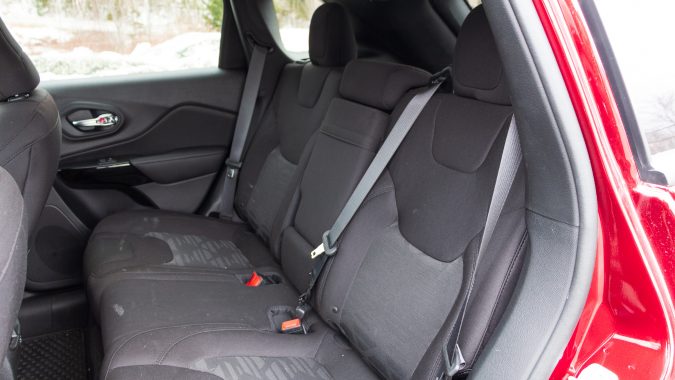 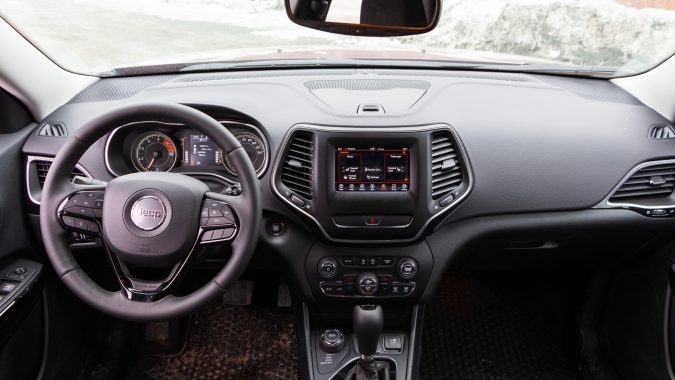 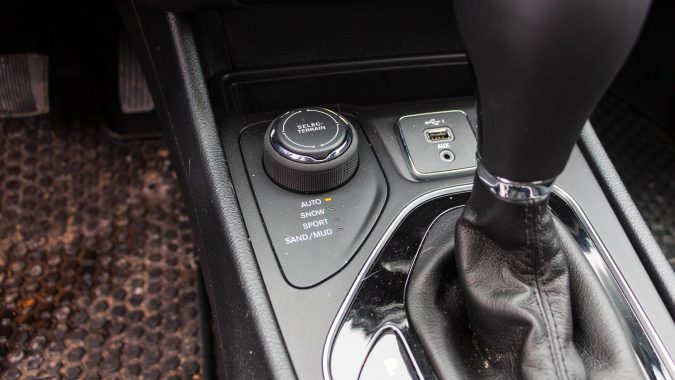 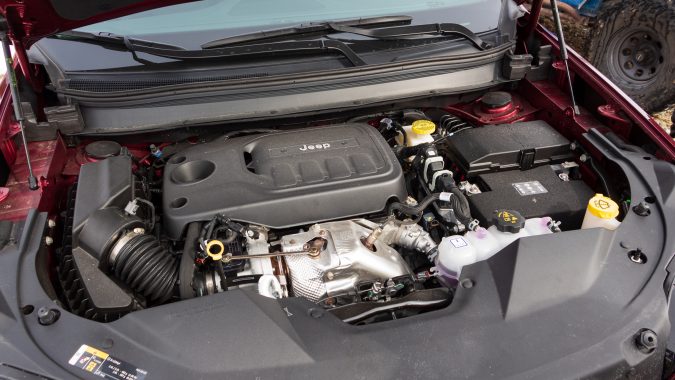 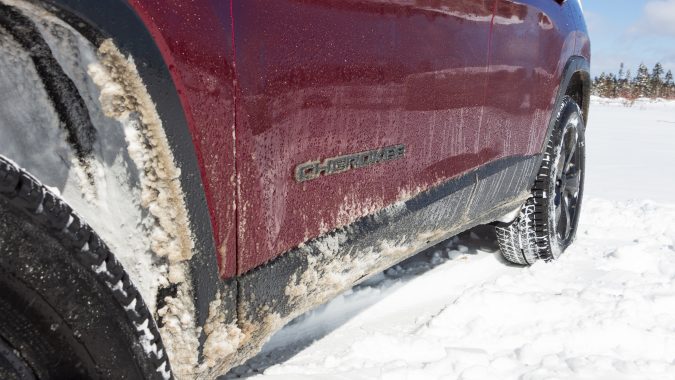 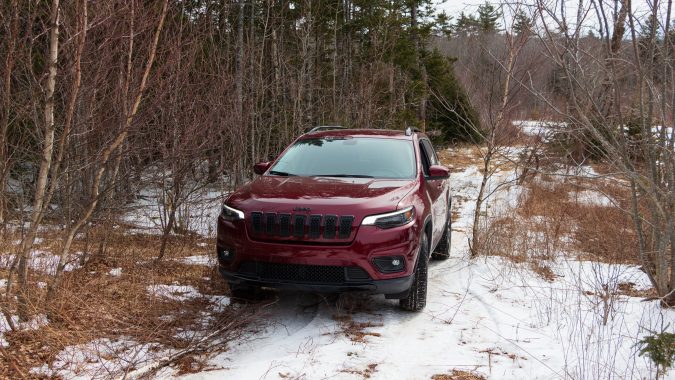 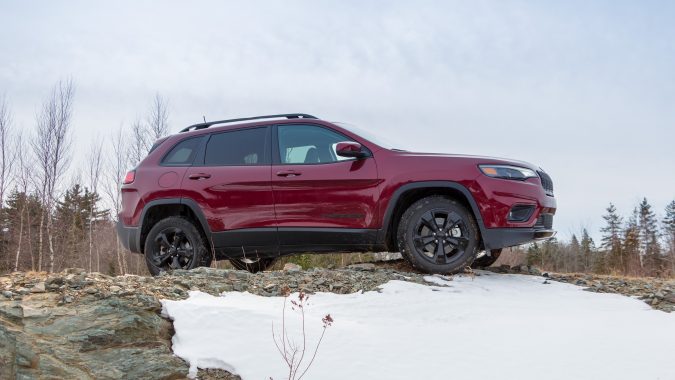 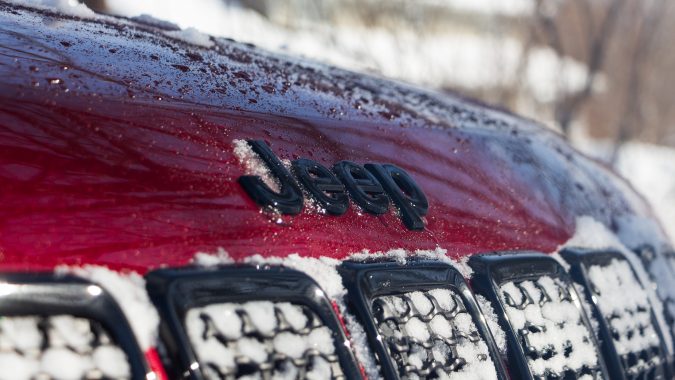 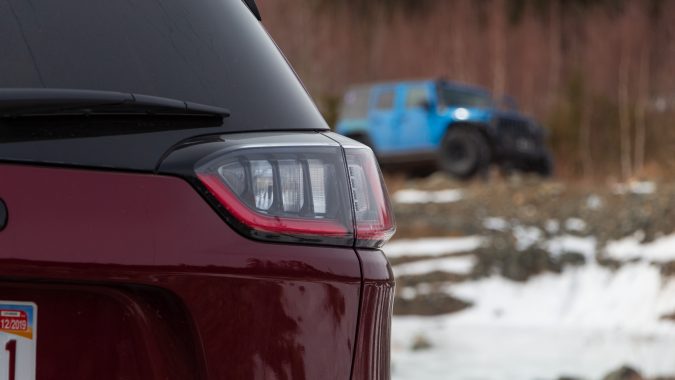 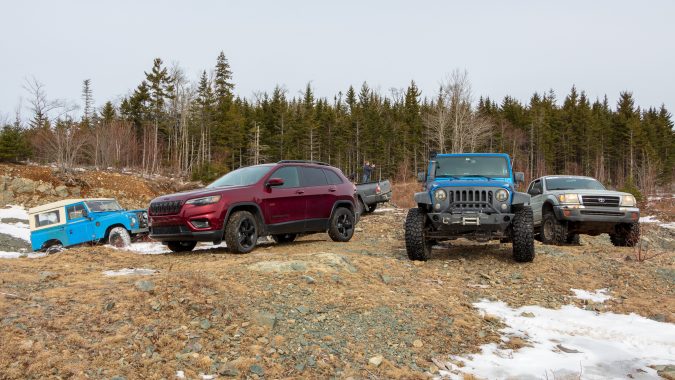 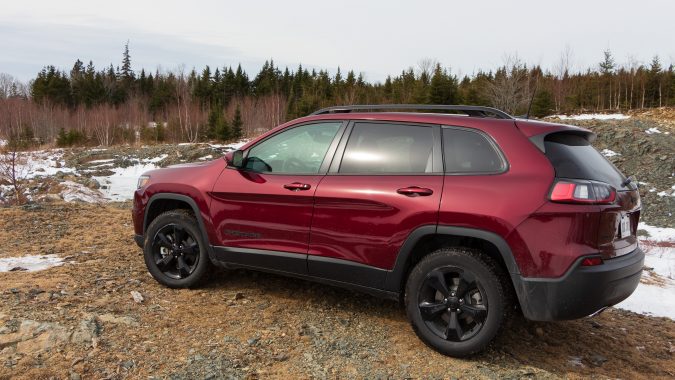