I haven’t been to Santa Fe. Any of them. It’s a surprisingly popular place name, with a quick search online showing more than 44 towns and cities sharing it. Even if you assume that the badge on this crossover is talking about the American Santa Fe, there are still more than a dozen. So, again, I haven’t been to Santa Fe. But I have driven the midsize crossover that wears the name. And it’s a pretty nice one.

This is the fourth generation of Hyundai’s crossover, and if you park the original next to it you’d probably never guess that they’re related. For a start, the new one is nearly 300 mm longer than that 2001 model, with every other dimension seeing some big increases. And if you were confused with the Santa Fe Sport and Santa Fe XL naming of the last few years, then good news because that’s gone too. Sort of. It probably will be gone soon, at least. For 2019, the new model splits the difference in length and says ‘no mas’ to the third row. The Santa Fe XL does continue, but it’s the old-generation. Expect it to disappear once the larger and newer Pallisade starts to show up at dealers.

The old styling of Hyundai’s crossovers was a little blobish and disappointingly bland. With the little Kona last year, that started to change. Now, with the new Santa Fe, the restyling continues. Hyundai’s current design boss comes from the Volkswagen group, penning cars for Audi and Lamborghini, and some of that influence is clear here. Like them or not, those gunslit marker lights stand out. The rest of the body manages to have sharp lines and square corners at the same time as it has deep swoops and gentle curves. You can call it a lot of things, but boring is definitely not one of them. 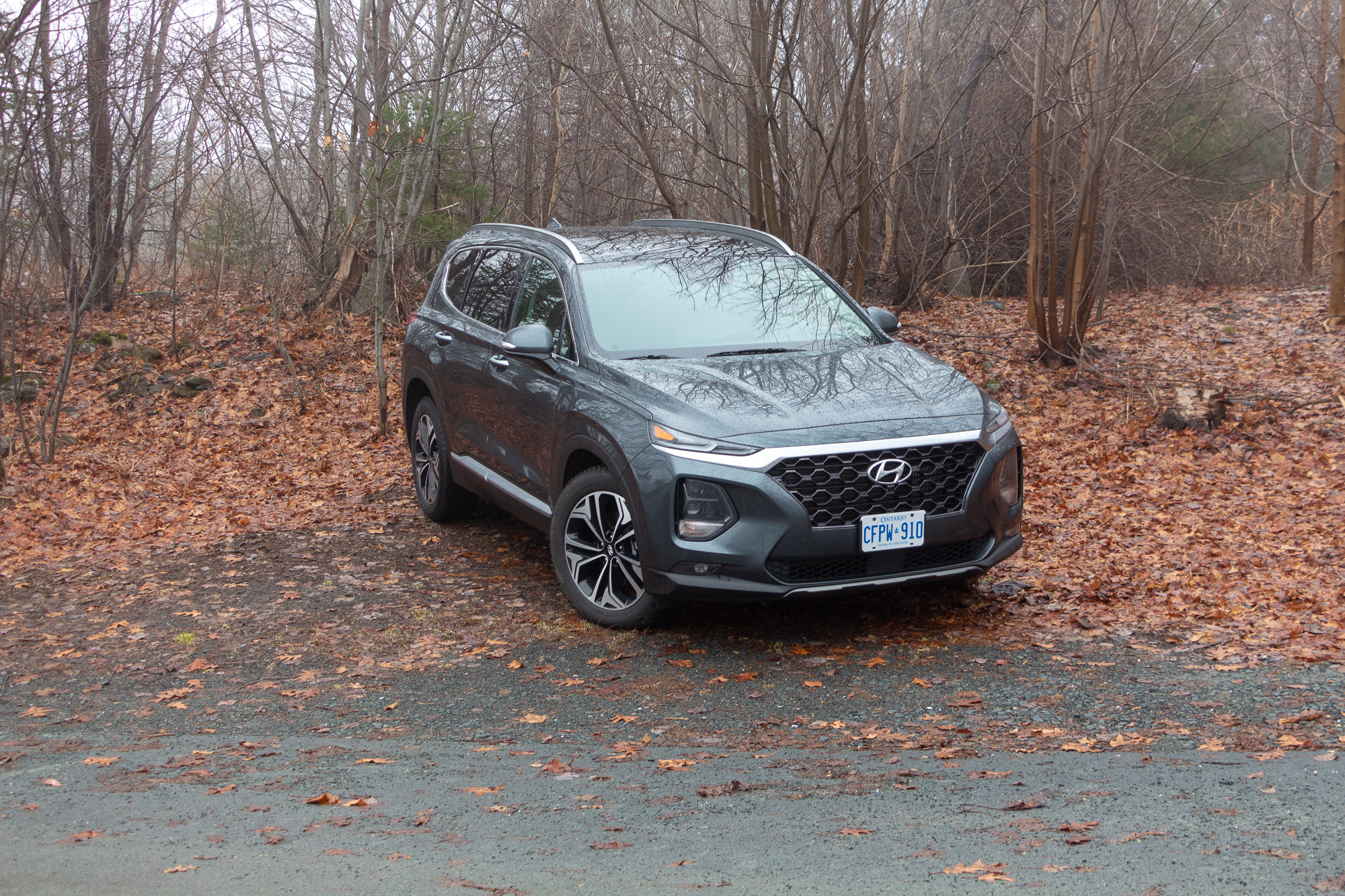 Inside, while the old model had a bit more style than it did on the outside, the 2019 still has some big material and appearance improvements. Like the soft-touch plastic on the top of the dash and the topper of the dash. That’s the beige (top) and black (topper) if you’re looking at the photos. Or the quilted-look of the speaker grilles. Though it’s not all cushion and comfy. If you’re one of the drivers whose knee likes to become part of the transmission tunnel you’re going to find this one sharp.

There are big functional improvements too, like the handy cell phone shelf above the glovebox. The cup holders were side-by-side in the old model, which isn’t a bad layout, but trading that for the much further forward inline pair of drink holes in the new one makes reaching your drink a little easier. 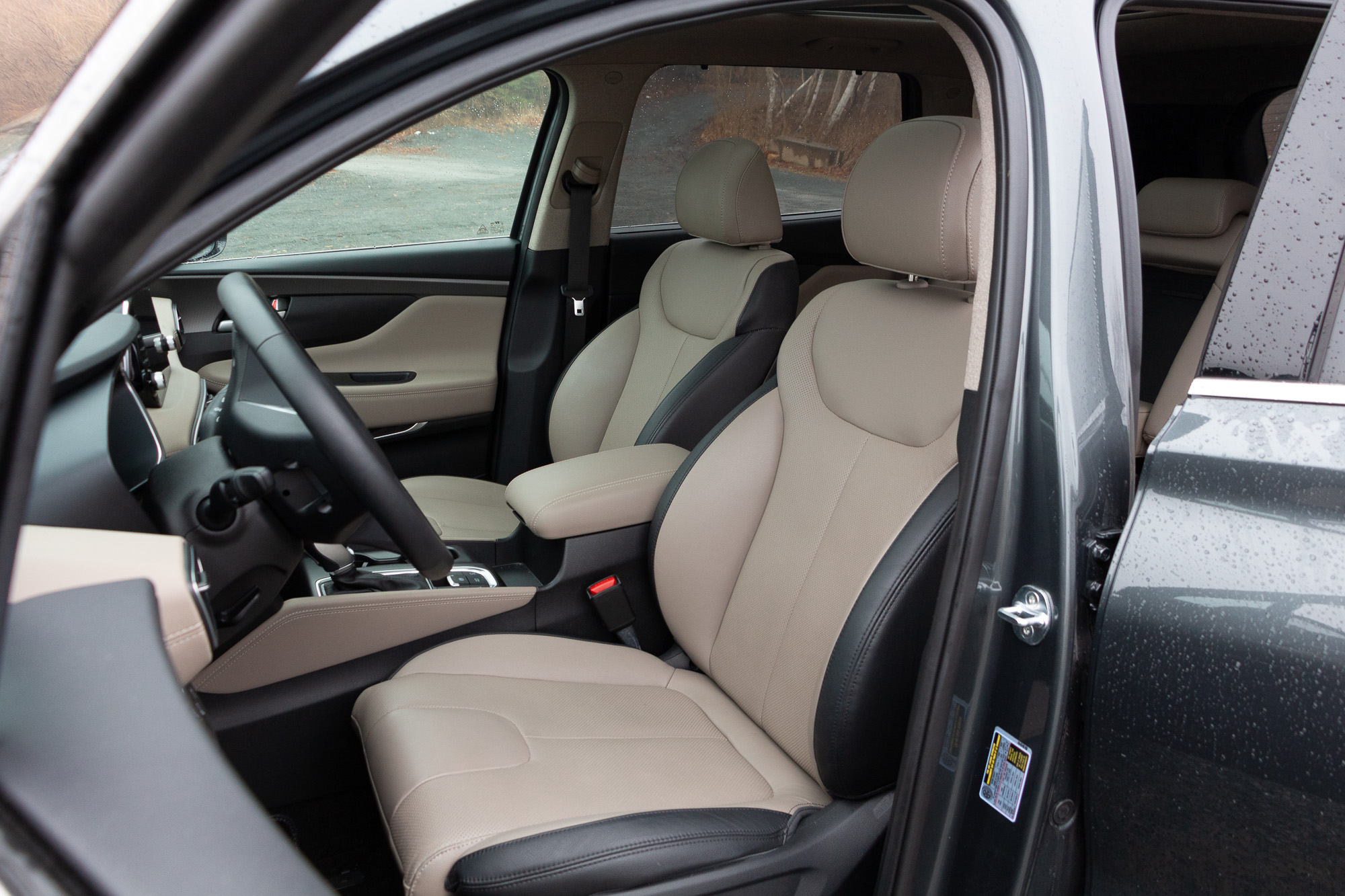 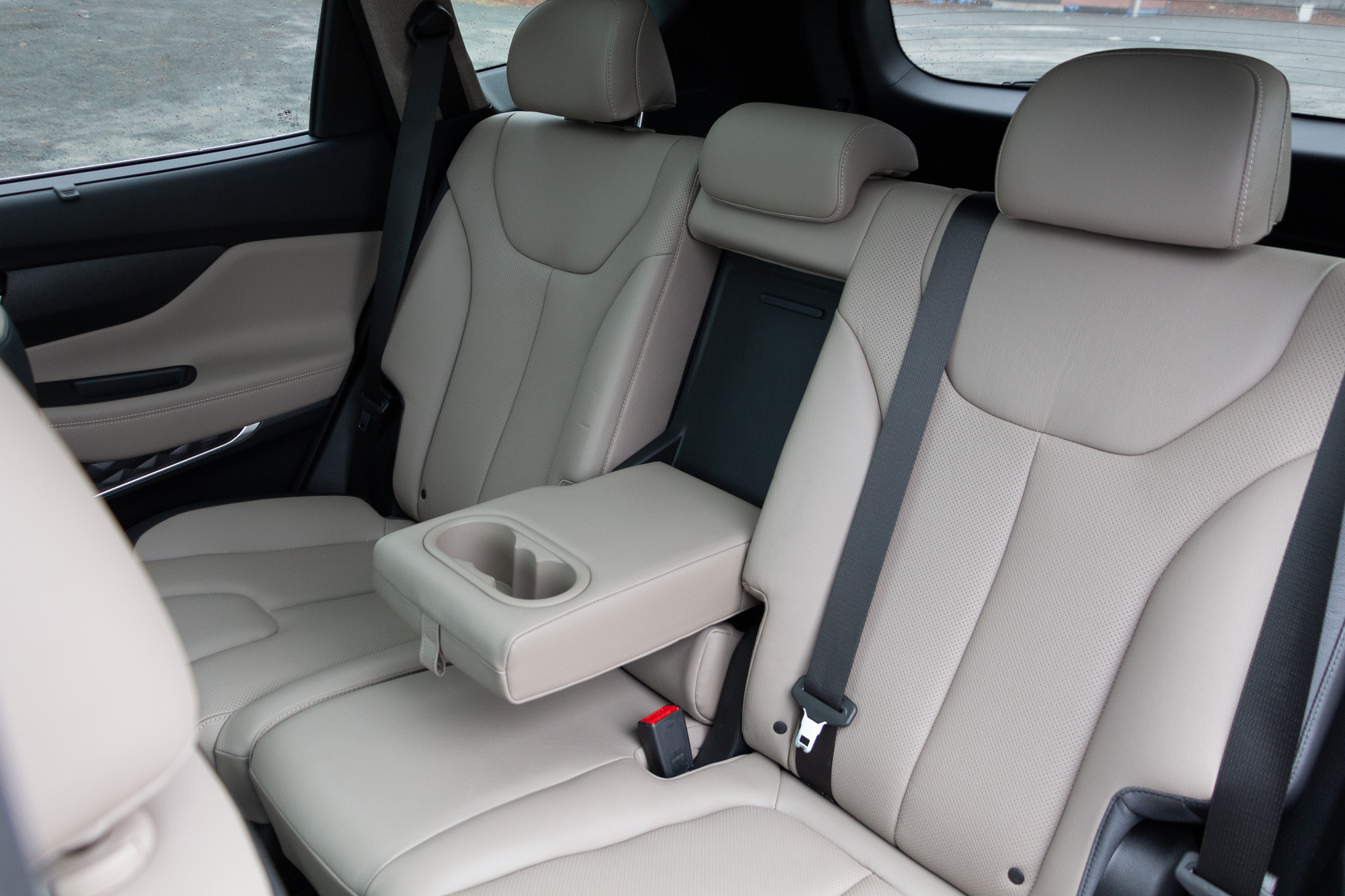 Cargo space is a little less commodious, though. The Santa Fe seems to trade some of that rear end for passenger room. If you’re sitting in the back, that space is probably appreciated. If you’re trying to pack in every last little box and bauble, then maybe you’d want something with a little more than the 2,019 L this crossover offers with the seats folded. Hyundai does have some tricks in floor to help you maximize the efficiency of that cargo space. Under the rear floor is an extensive system of organizers, with a big foam divider. Fill it with ice and use it as a cooler, separate your muddy shoes from the clean carpet, or toss it in the garage, along with the cargo floor, when you need every last litre. On all but the base Essential trim, the rear seats slide fore and aft so you can trade some knee space for some more groceries or luggage.

My Ultimate trim tester had an 8.0-inch touchscreen with navigation and the loud and clear Infinity audio system that boasts those quilted speaker covers. But even the basest trim comes with a 7.0-inch screen that includes Apple CarPlay, Android Auto, and four 2.1-amp USB ports. On top of the bigger screen, Ultimate gets wireless charging and a head-up display to keep your eyes on the road.

Loads of equipment has long been the Hyundai hallmark, so accordingly the new Santa Fe has lots of stuff. Like a heated steering wheel. On every single trim. Yes, please. They all have heated seats too, with Luxury and Ultimate heating the rears and venting front passenger bottoms. There’s a wide range of safety kit, with adaptive cruise, forward collision avoidance, pedestrian detection, lane keeping, and high beam assist standard on all but the base trim and optional on that one. Standard on the rest but not available on base are blind spot collision avoidance, rear cross traffic avoidance, and a couple of new ones. 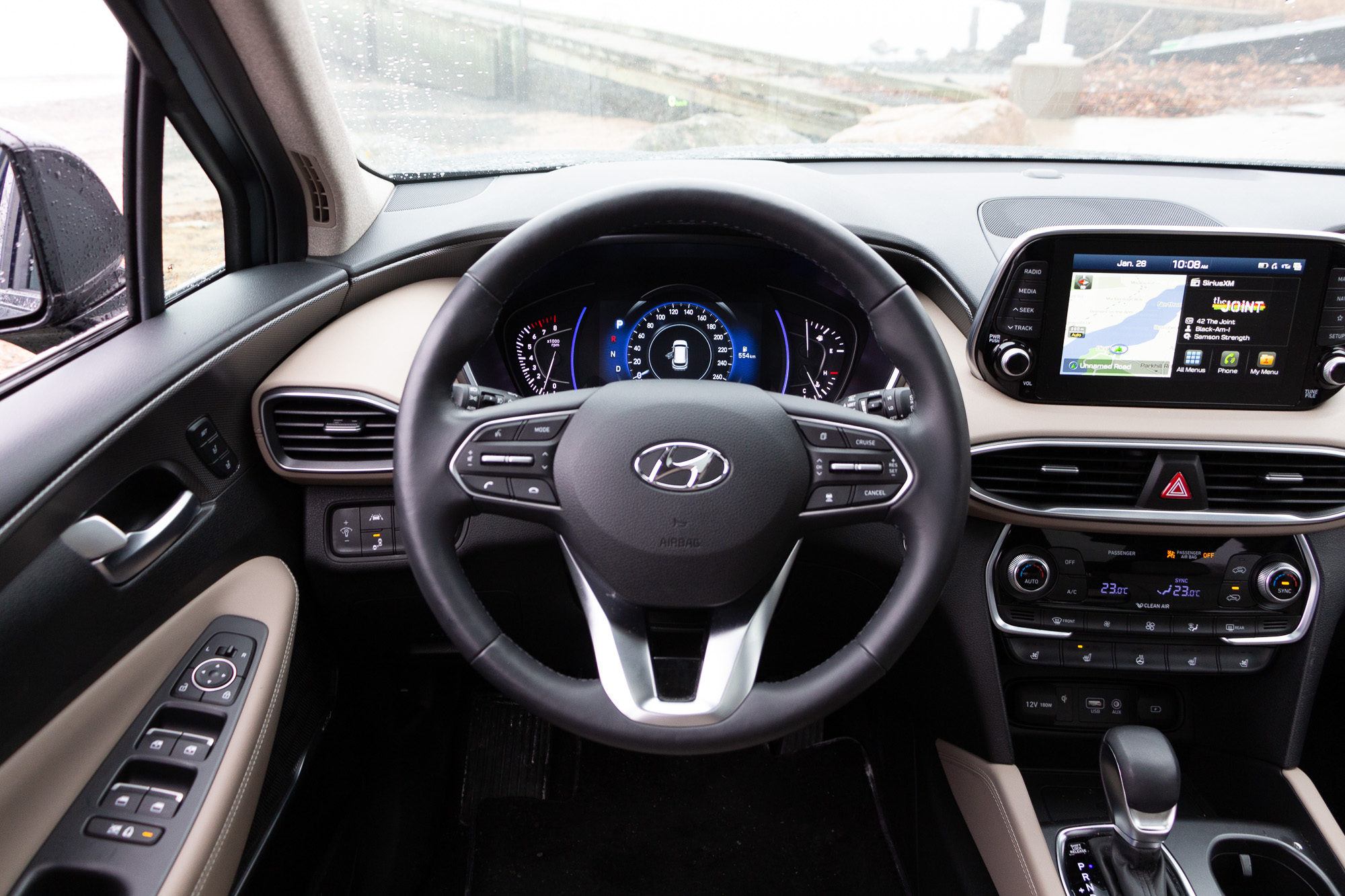 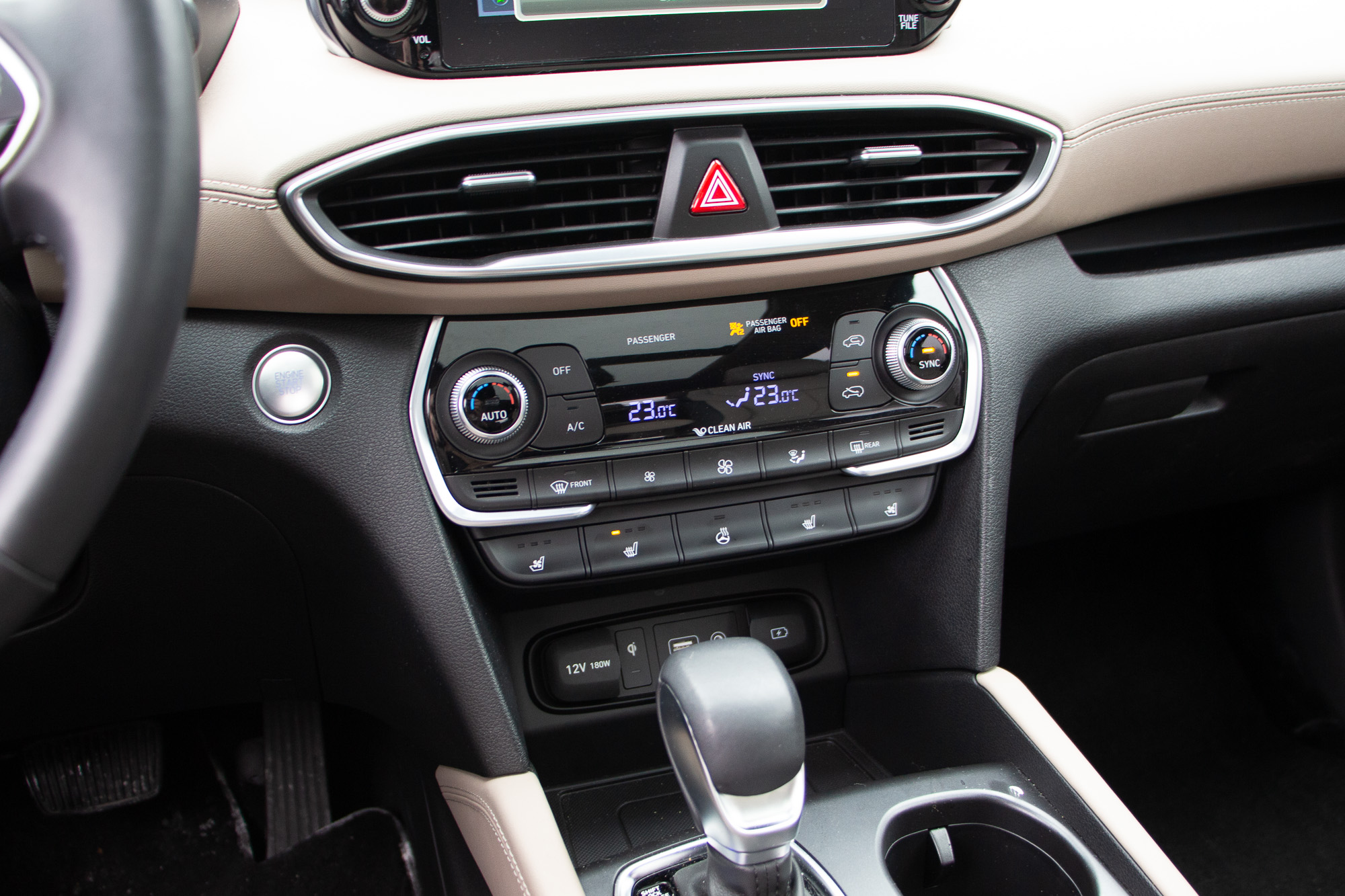 Hyundai’s rear occupant alert adds ultrasonic sensors. Instead of warning you that you had the door open at some point in your drive like some others, a warning that might be easier to ignore, the Santa Fe actually knows if there’s something back there. It uses door logic too, but if you lock the car and those sensors detect back-seat movement the horn will honk for 25 seconds. It’ll keep repeating that up to eight times. In case the forgotten rear-seat passenger doesn’t move until after you’ve walked away, the system can be set to send you a text or email through Hyundai’s Blue Link telematics. Equally innovative, safe exit assist stops rear-seat passengers from getting out into traffic. If the blind-spot sensors detect an oncoming vehicle or bike, the rear doors will re-lock temporarily. Even with the ignition off.

Powering the Santa Fe Ultimate is a 2.0L four that boosts its way to 235 hp and 260 lb-ft of torque. While it’s a bit jumpy when you’re pulling away from a stop, the engine offers up good power for this segment. Merging and passing with a full load, it still feels peppy. Some of the thanks for that goes to the eight-speed automatic that was generally quick and smooth to swap cogs. At the pumps I managed a reasonable, for winter and snow tires, mid 10s for L/100km. It also gets Hyundai’s Smart drive mode in addition to the usual comfort and sport. Smart tries to monitor your driving and switches to comfort when it thinks you’re taking it easy and then switches to sport when it thinks you’re going faster. 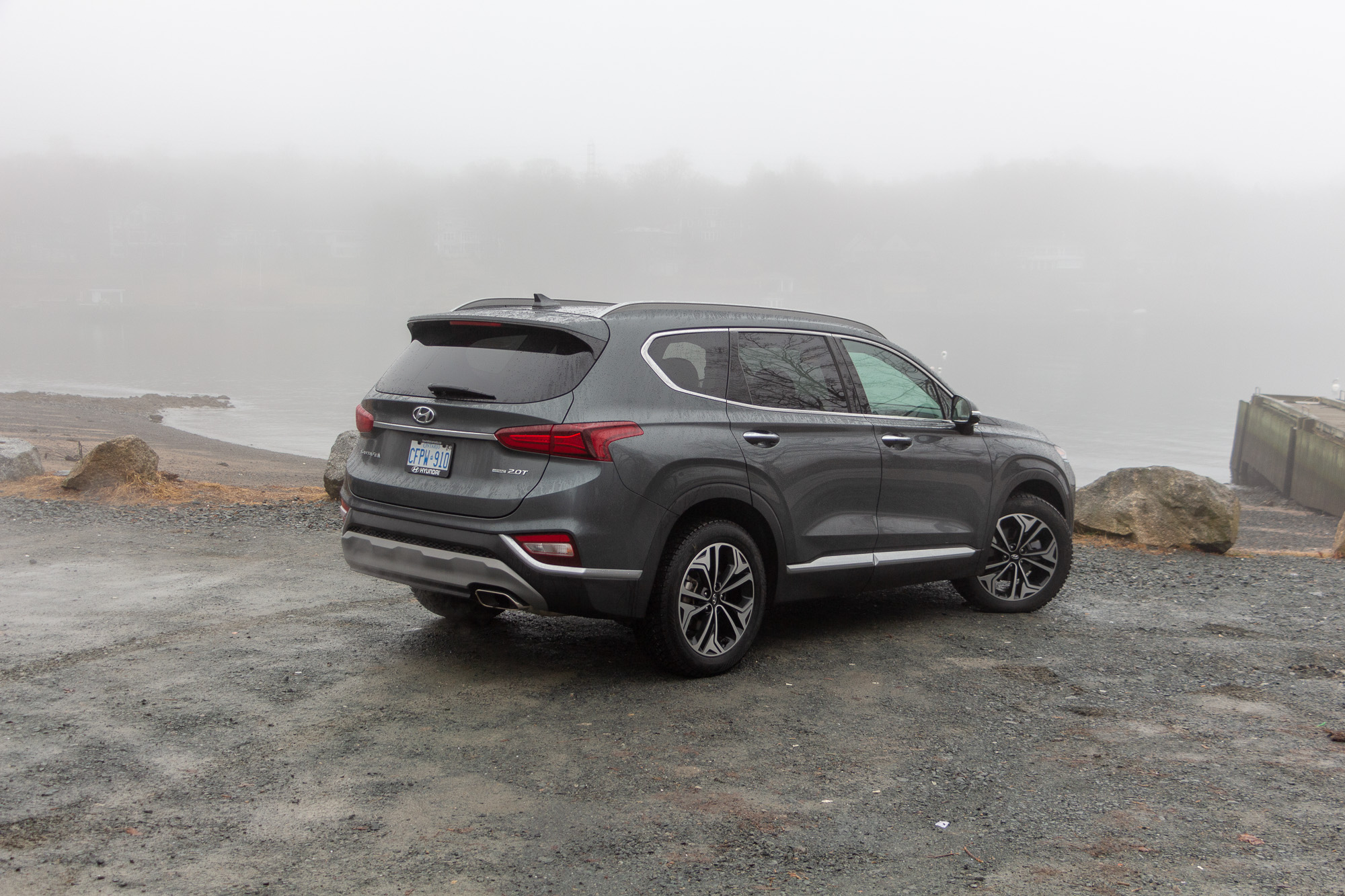 The HTRAC all-wheel drive system adds torque vectoring that changes power distribution depending on drive mode. It will also let you lock it in to make sure there’s power going to both axles. But it still doesn’t make this an inspiring drive.

The Santa Fe gives you lots of ride comfort. And it doesn’t float or crash over bumps. But while it’s definitely well controlled, with Hyundai’s previous lacklustre suspension tuning efforts now a distant memory, this isn’t going to engage you as a driver. Though that’s likely not the point. This is, after all, a tweener crossover, sitting in between the compacts and three-row mid-sizers. This isn’t where you go when you want to carve corners, it’s where you go for comfort and space. There, it delivers.

The 2019 Hyundai Santa Fe is an appealing package. It feels “just right” when it comes to space. It offers lots of features and just about every new driver aid. Then there are the luxury touches, like the soft tweed-like headliner in my tester that really helps make it feel more special. If you’re shopping in the valley between compact and three-row, this one will be on the shortlist. Maybe take it to the real Santa Fe? Your choice which one. 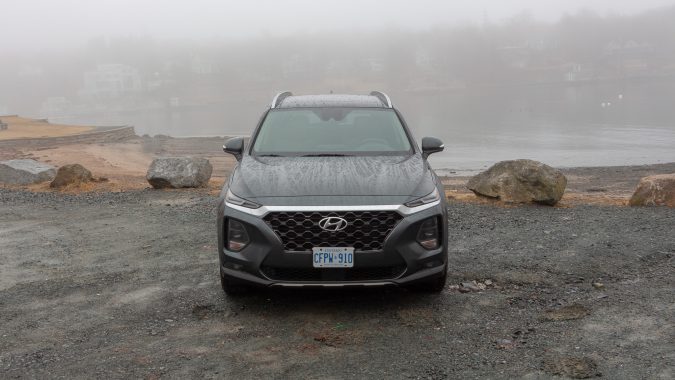 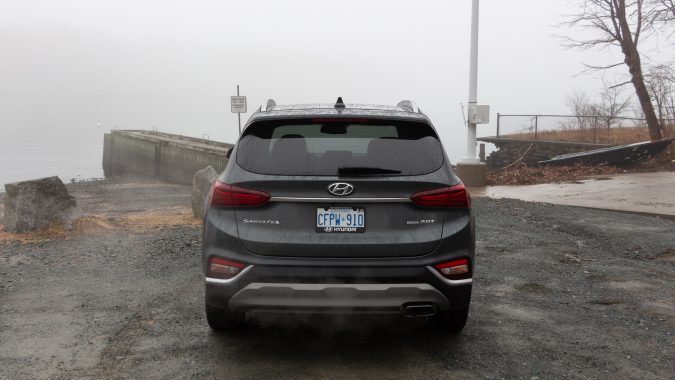 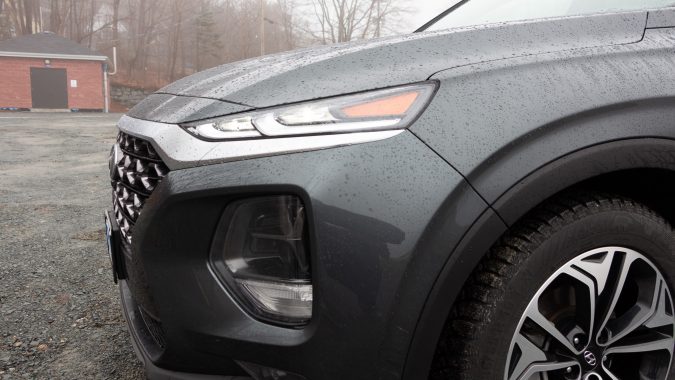 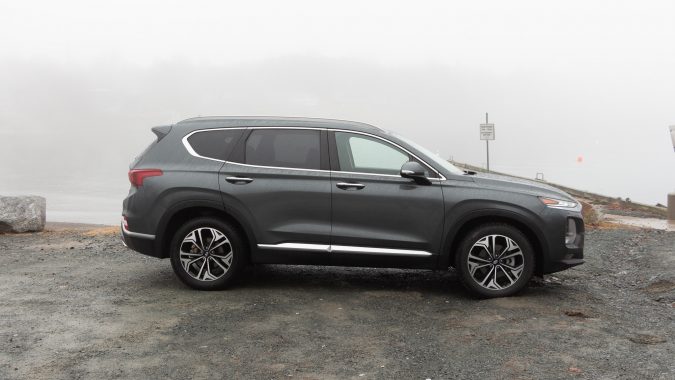 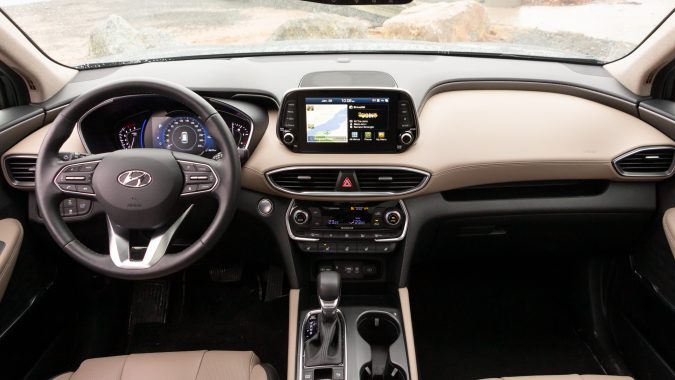 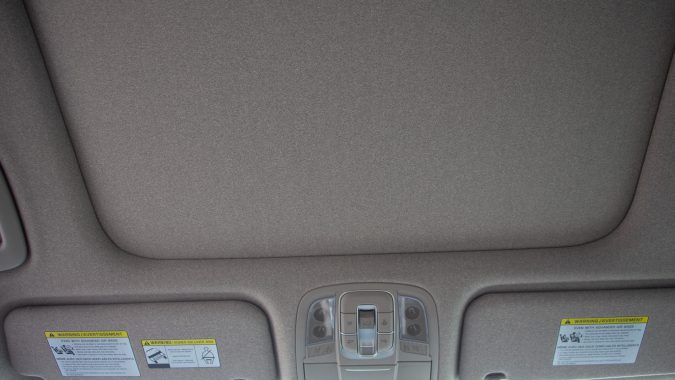 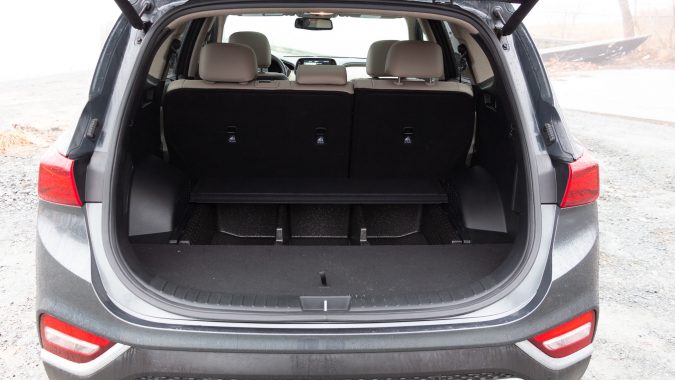