Sometimes it can be great fun to use a car for a purpose in which it was totally unintended. Witness your author’s annual insistence on driving 1600km through a February blizzard to the Canadian International Auto Show in a sports car.

On occasion, though, it ends up being equally rewarding to deploy a vehicle in a task that perfectly fits its mission. That’s why we decided to take the 2019 GMC Terrain Denali on a family trip in search of Christmas treats.

Forest Glen Greenhouse is a family-run business which got its start over thirty years ago as a simple, small garden. Now, owners Judy and Lee Thompson have grown it (pun intended) into a space spanning six-acres. At this time of year, they throw their doors open and invite the public into their grounds, with over 50,000 beautiful red poinsettias on display. With snow on the ground, we packed all hands into the GMC and headed out.

The Denali sub-brand has been an arrow in GM’s marketing quiver since 1999 when it was appended to fancy versions of the Yukon SUV. Since then, the Denali name has grown to encompass every model that GMC makes, save for the utilitarian cargo box vans. Demand for leather trappings is understandably low in that segment.

General Motors positions the Terrain as a competitor in the small crossover class, putting it up against the likes of the Honda CR-V and Toyota’s newly-restyled RAV4.

Given the level of focus being shovelled at the concept of safety by other manufacturers, notably Toyota and its Safety Sense suite of nannies, GMC would do well to highlight the Terrain Denali’s level of kit in this area, plus its five-star safety rating. However, the good stuff – adaptive cruise and the like – are extra cost items that should be standard equipment at this level. For example, the $995 Surround Vision allows drivers not only a top-down look at the car while parking but also the ability to view one’s environs from the point of view a person would get while using the ‘follow’ camera in a racing simulator. 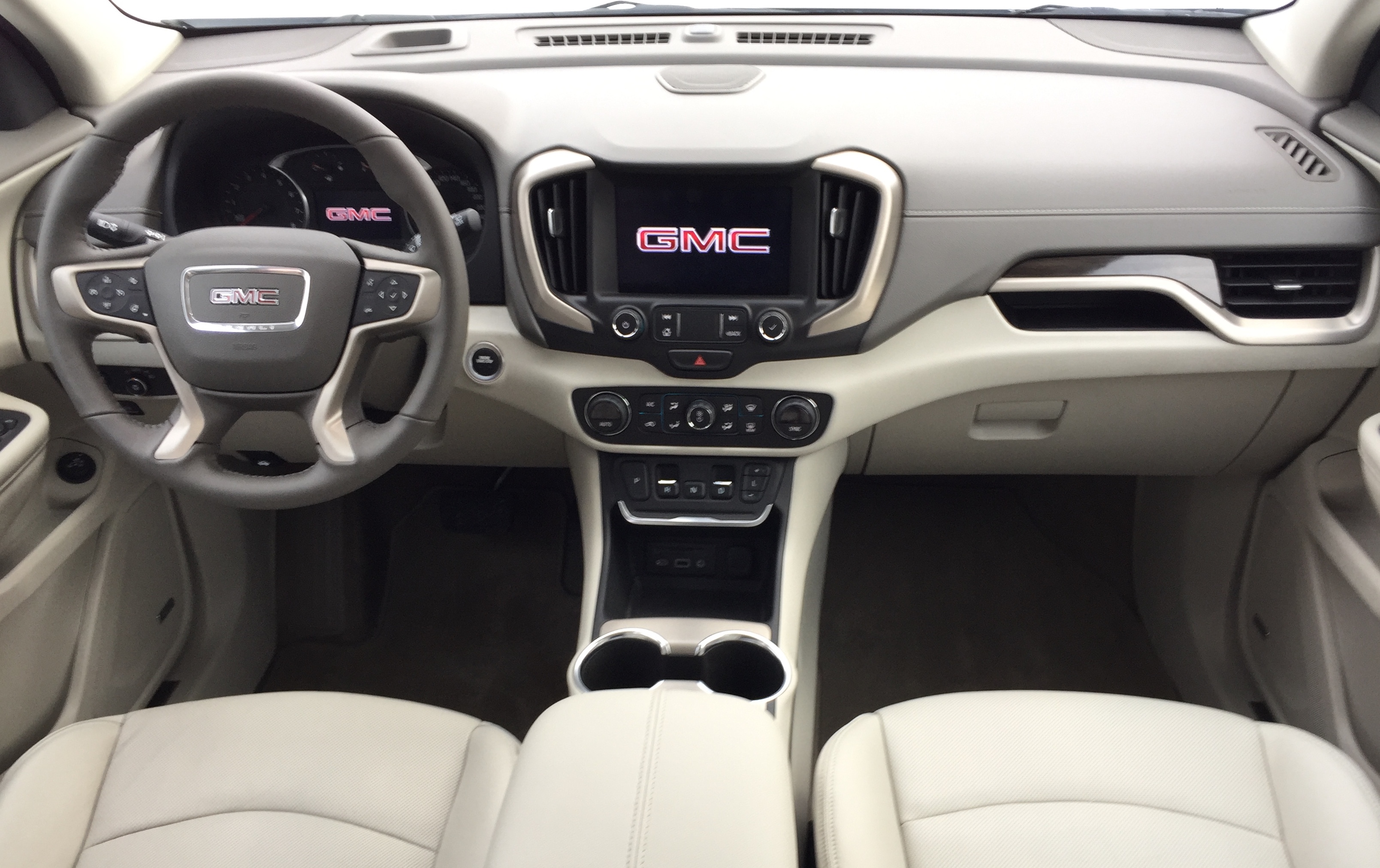 It’s a clever use of the Terrain’s camera system, one that makes parking a breeze and would be great on, say, an off-road truck while gingerly trying to place a wheel over a rock. The HD Rear Vision Camera works as advertised, providing a view astern with alarming clarity. Even my father took note of its image quality, noting that most other systems “make everything look like the Blair Witch Project.”

And you wonder why I’m given to a certain amount of hyperbole in these reviews.

Our journey to the Forest Glen Greenhouse takes us past Brookfield Bakery, a small shop that’s been selling tasty treats to the community since forever. The smell of chocolate chip cookies and cinnamon buns soon fill the car. Not all of them make it to our next stop at the greenhouse. 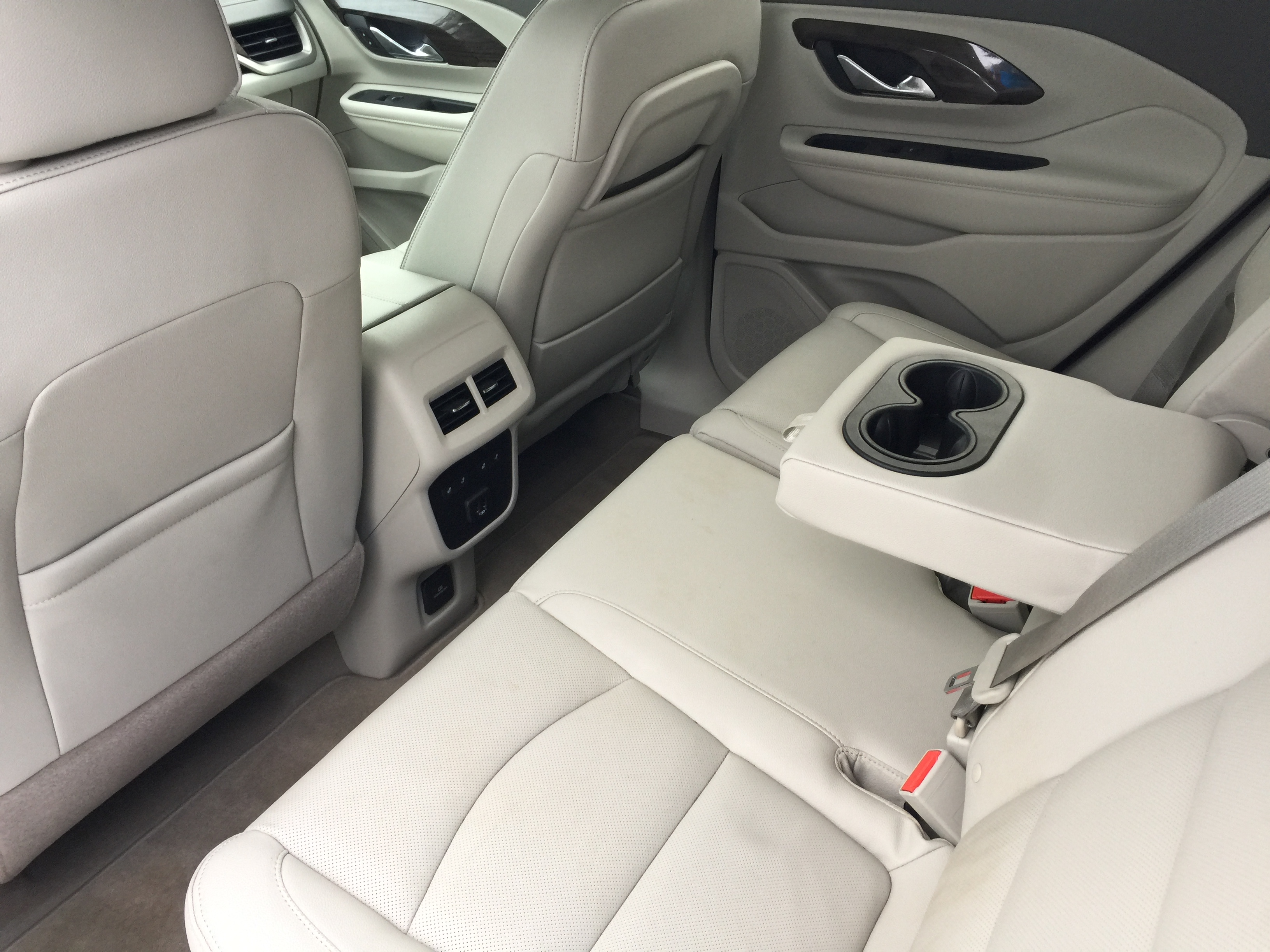 Sitting on a longer wheelbase than the new RAV – 2725mm vs 2960mm – and casting roughly the same-sized shadow, the 2019 Terrain drew plenty of complementary remarks from passengers on our journey to find festive treats. The Denali-spec seats are wrapped in soft perforated leather and were deemed quite comfy by both front and rear seat riders.

Shaded in a hue GMC calls Light Platinum, your author does worry about how the cream-coloured carpets will wear over time. The floor of our tester, bearing 3500 km on its odometer, was already stained brown by winter’s worst being tracked in by the admittedly clumsy and elephantine feet belonging to a parade of auto journalists. Pro Tip: opt for the $290 all-weather floor mats. Overall fit and finish was excellent, giving the Terrain Denali a very solid feel.

Ahead of the passenger and above the glovebox is a clever illuminated open mailslot of a cubby that’s the perfect size to hold a smartphone. Adding a charging point up there would make the space even more useful. The Terrain’s unique push-button shifter frees up console space and is a lot more intuitive than the luddites would have you believe. Mark me down as a fan.

Rear seat riders will enjoy a nice flat floor and heated seats which may be set to warm your butt or back. There is also a pair of thoughtfully placed USB ports and an 11V outlet. Out in the way back, there is clever underfloor storage in the cargo area, tall enough to accept a 10-inch Dairy Queen ice cream cake (that very specific measure is brought to you by a supply run for a November birthday party).

The rear hatch itself, opening to an area with 838L of measured cargo space, has a wide and well-shaped opening but its handle is located down by the bumper where you’ll get your hand dirty. Every. Single. Time. Use the fob or the standard hands-free system instead.

Our destination takes us off the paved Highway #2 and onto the dirt portion of Brentwood road in rural Nova Scotia. The morning’s snow has turned off to a bit of drizzle, changing the road surface in to a muddy soup that sticks to the Denali’s Summit white exterior like the frosting of those long-gone cinnamon buns sticking to the roof of my mouth. 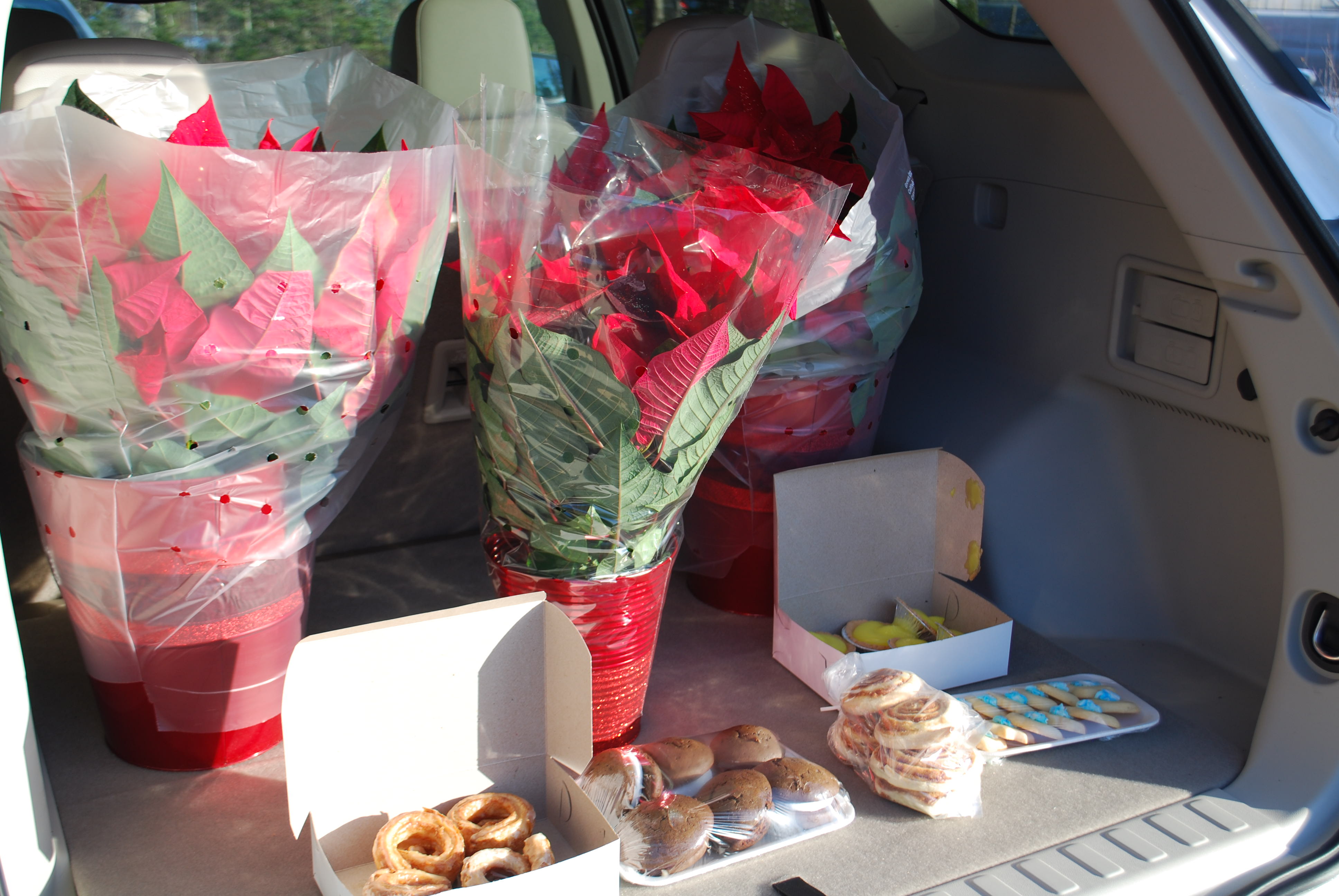 The Terrain’s all-wheel drive system is shoved along by a 2.0L turbocharged inline-four making a robust 252 horsepower and backed by a nine-speed automatic transmission. This is an appropriate level of grunt for a crossover weighing in at 3800lbs. Lesser trims of the all-wheel drive Terrain, such as the SLE and SLT, are available with a 1.5L turbo. Buyers should pop for the 2.0L and its $1700 premium, without question. So equipped, its price is analogous to top-spec trims of its competitors but with a horsepower advantage.

A dumping of snow and frigid temperatures earlier in the week proved the system’s worth, allowing the Terrain to haul itself up to speed in slick conditions. Winter tires and a quartet of disc brakes hauls everything safely back to rest with no drama. 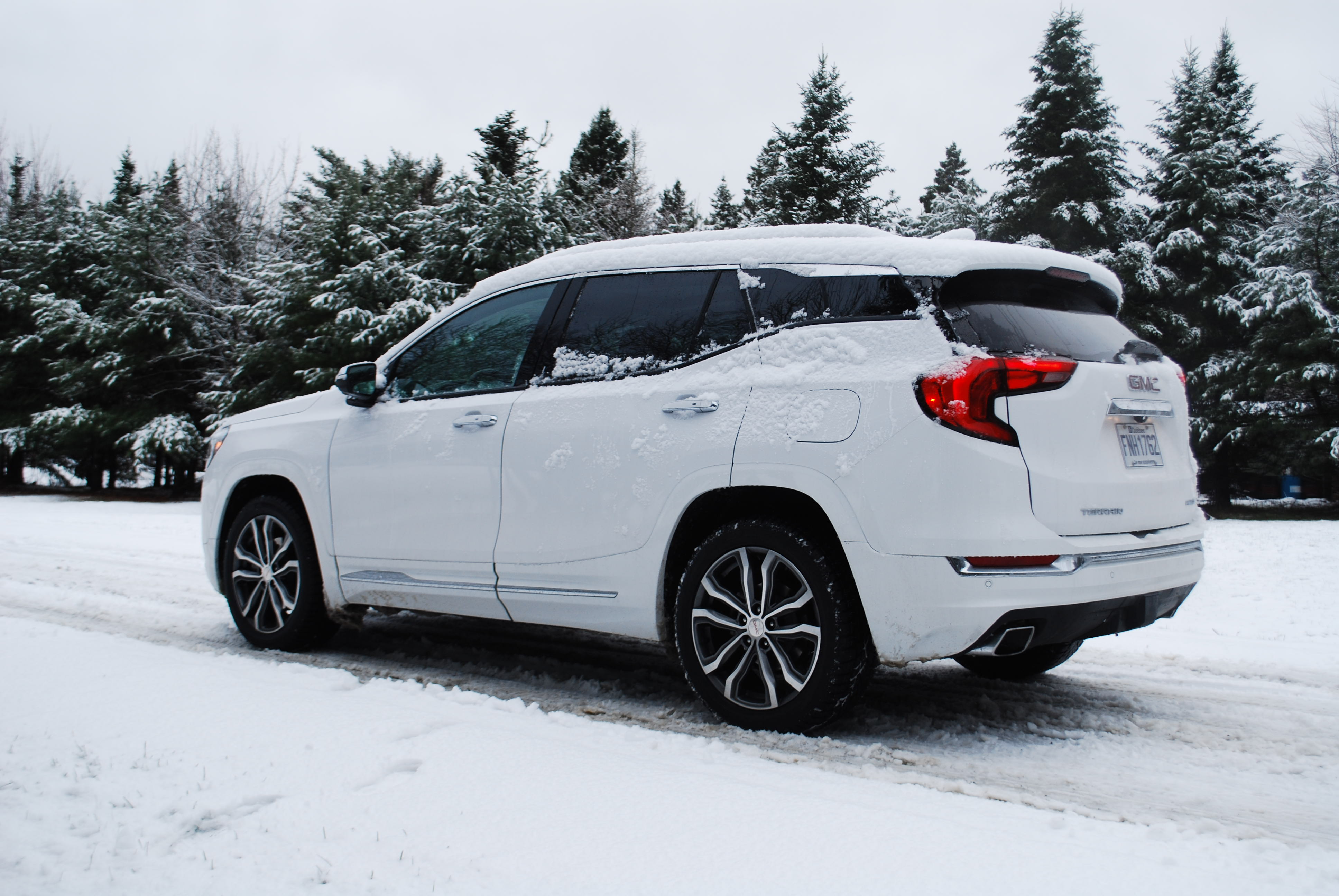 Forest Glen Greenhouse delivered the goods, with rows upon rows of neatly arranged poinsettia plants on display, eager to be taken home by excited shoppers. The Thompsons estimate nearly 3000 people will pass through the doors during the weekend event, which is great support for a locally-owned business that employs people in the area while giving something back to the community.

Poinsettia plants and sweet treats tucked away in the Terrain’s cargo area, we strike out for home. All hands are happy and comfortable. Using a car for its intended purpose worked out a lot better than anticipated. Perhaps I’ll do it more often.

Except when driving to Toronto in a blizzard, of course. 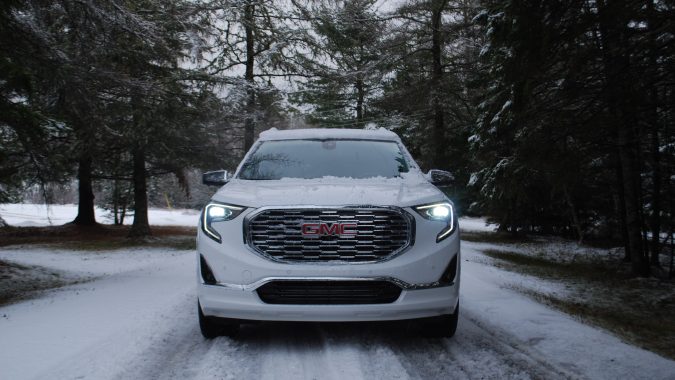 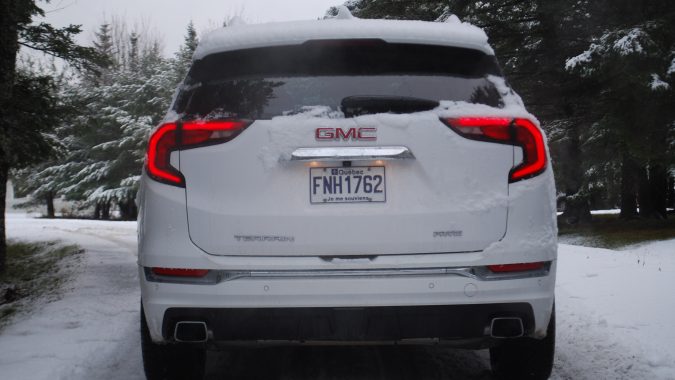 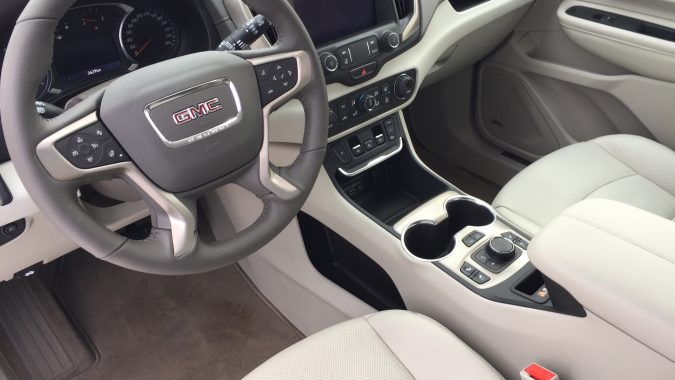 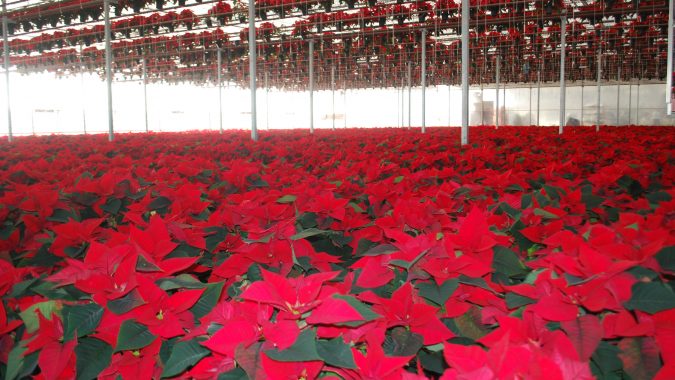 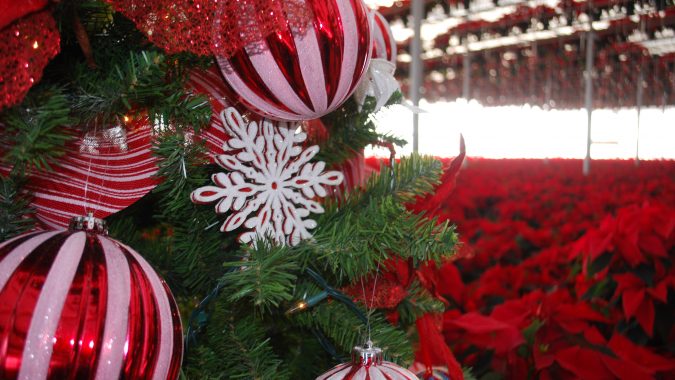 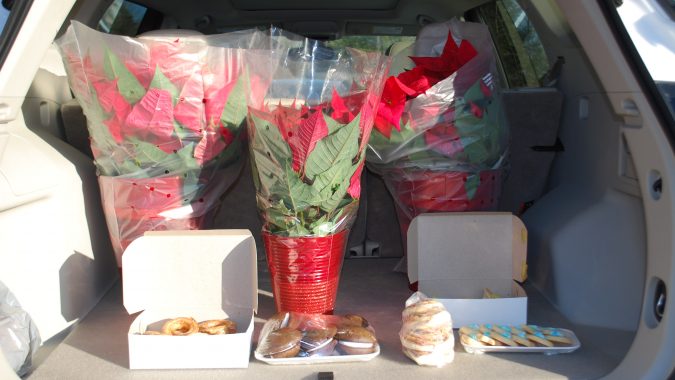 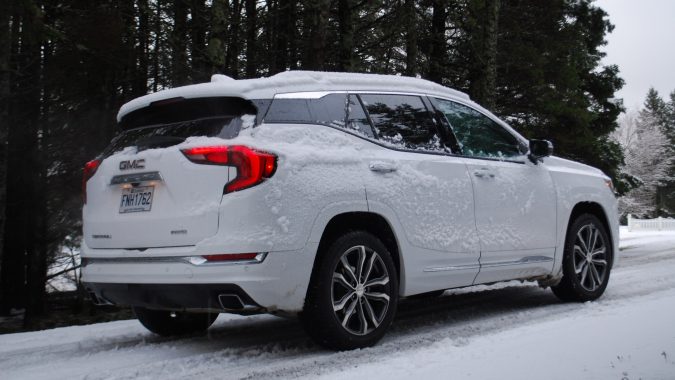