I like the larger Genesis G80 and G90 sedans just fine, but let’s get real here: if Hyundai’s luxury division is going to survive in a very crowded and competitive market, it’ll take a lot more than those two.

I mean, as recently as 2016 both of those cars were badged as Hyundais.

Lightly updating those cars and porting them over to Genesis beginning in late 2016 made sense for a brand that had only been officially announced a year earlier and was in urgent need of product. Filling the void with existing models was the most practical option.

But practicality will only take Genesis so far. What the brand really needs to excite car buyers is bespoke product. With the arrival of the compact G70 sedan, Genesis now has a car that is truly its own. 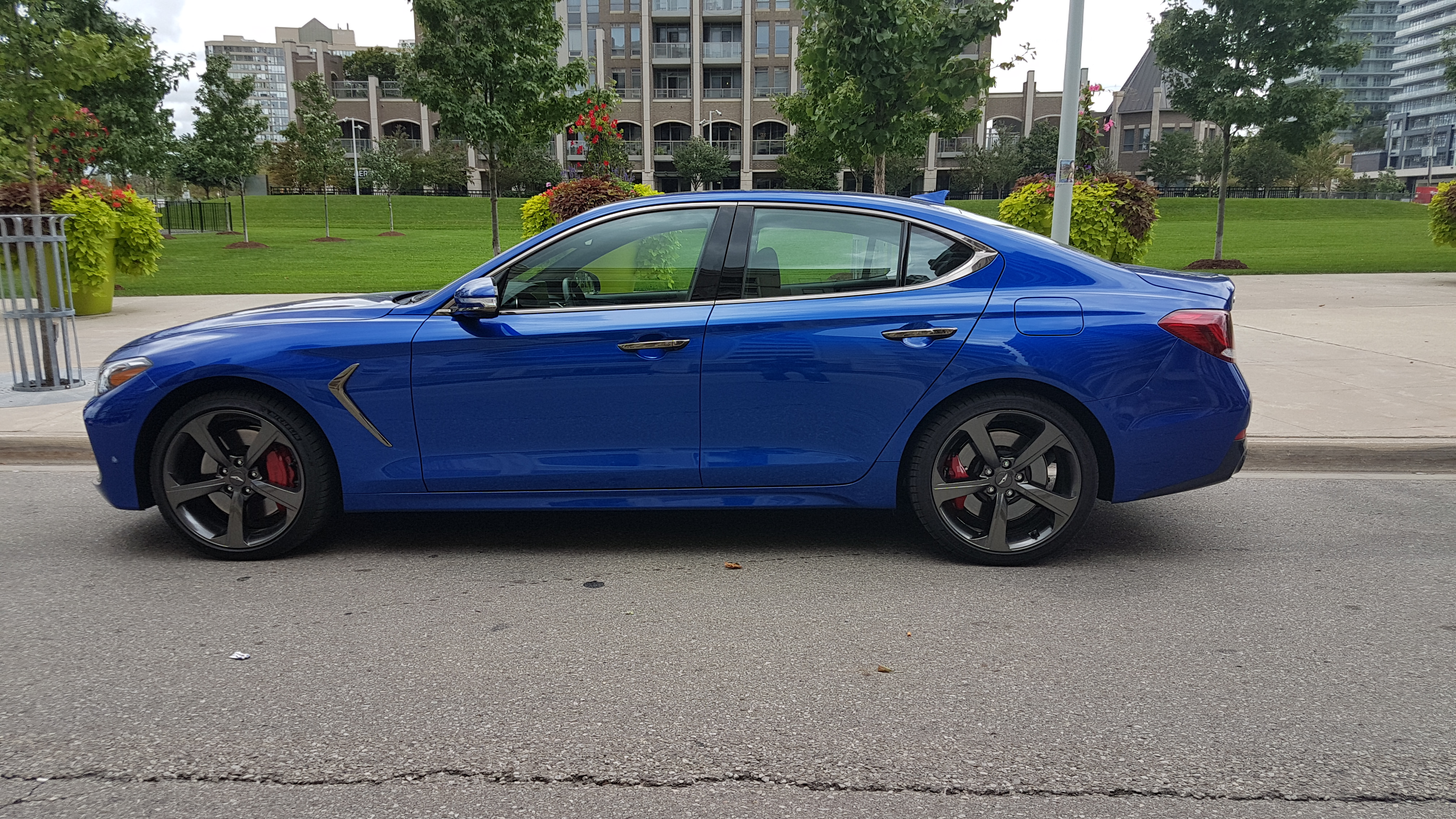 Aimed to take a bite out of the sales of the Audi A4, BMW 3-Series and Mercedes C-Class sedans, the G70 is being positioned as a talisman for the brand, a standard-bearer the company’s fortunes will likely be tethered to, especially in North America. Or until the inevitable wave of SUVs roll in.

Built on a platform shared with the Kia Stinger, the G70 shares engines and transmissions with its corporate cousin but with some notable differences for the Canadian market.

Whereas the Stinger is available with an 8-speed automatic and AWD only, the G70 can be ordered with a 6-speed manual and RWD which is available with the 2.0-litre turbocharged inline 4-cylinder (252 hp / 260 lb-ft.) on the 2.0T Sport trim. 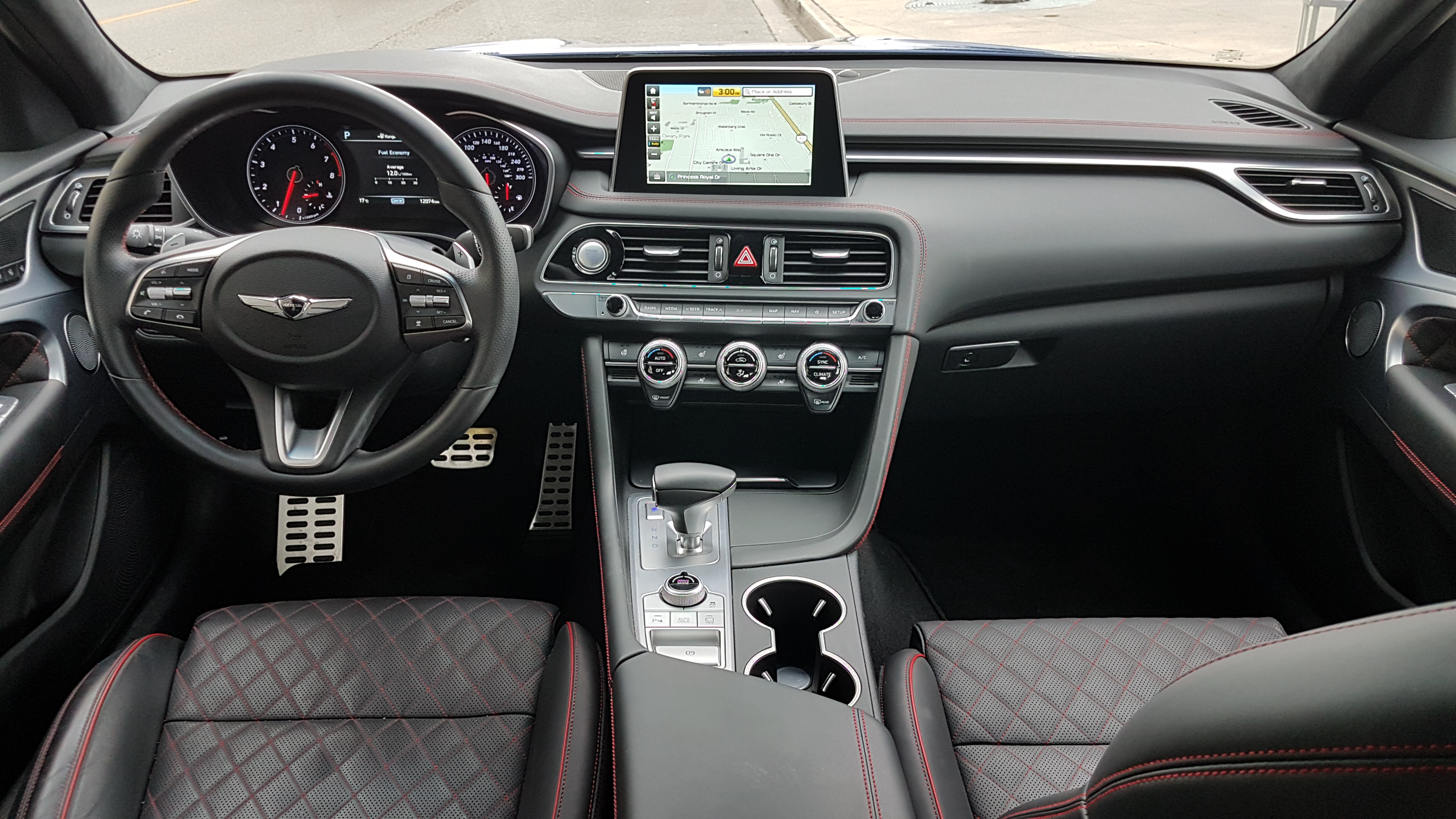 For this review, Genesis Motors Canada furnished me with a range-topping Mallorca blue 3.3T Sport model.

It is one of two trims in the upper range that comes equipped with Hyundai’s corporate 3.3-litre twin-turbocharged V6 (365 hp / 376 lb-ft.) and is paired with an 8-speed automatic transmission and AWD. The latter two features are standard across the G70 range, save for the 2.0T Sport.

As with other Genesis models, all G70 models are priced all-in, with no stand-alone extras or option packages, save for a few accessories such as all-weather floor mats and a rear bumper protector.

Packaging the cars in this way means that each trim comes with a lot of standard stuff, and the 3.3T Sport is crammed full of it.

I won’t list them all but be assured there’s a lot here. In addition to the usual items such as heated and cooled leather seats, embedded navigation and satellite radio, my tester also has a dual exhaust system, 19-inch wheels wrapped in Michelin Pilot Sport PS4 tires and Brembo brakes. 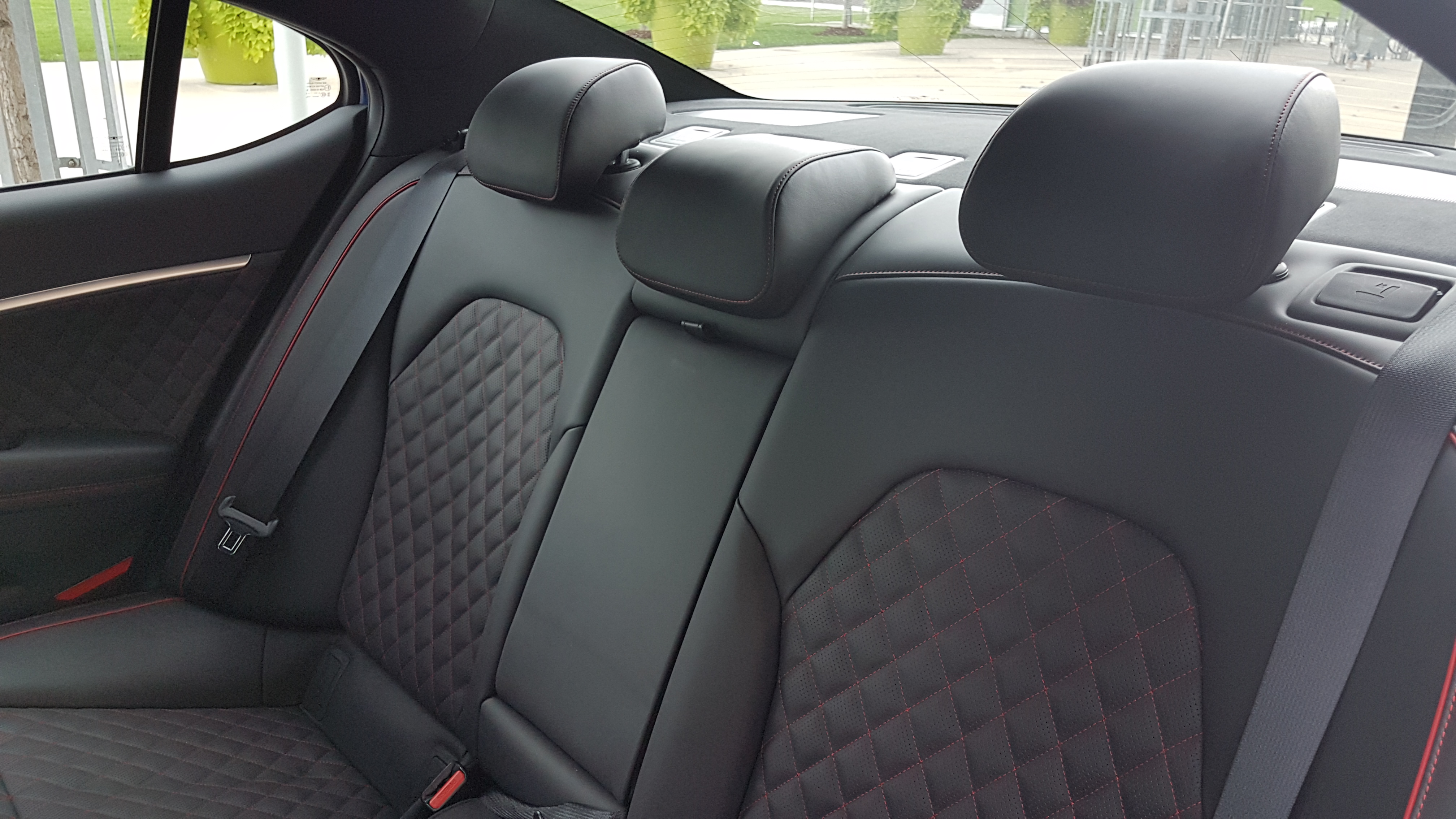 Although it is related to the Stinger in terms of components and shared development resources, the G70 isn’t just a clone of the Kia.

For instance, the G70 has different dimensions. It is considerably shorter (144 mm), slightly narrower (21 mm) and rides on a shorter wheelbase (70 mm) than the Stinger, although both cars are the same height (1,400 mm).

As a result, the G70 has marginally less leg, head and shoulder room than the Stinger, but it’s only a few millimetres in each instance – not something you’re likely to notice.

From a construction standpoint, the G70 utilizes some aluminum chassis components and body panels (hood), but the company doesn’t provide an exact percentage breakdown of materials.

For comparison purposes, my tester checks in with a curb weight of 1,816 kg which is 73 kg lighter than the comparable Stinger GT, although that’s due primarily to the G70 being a smaller car. 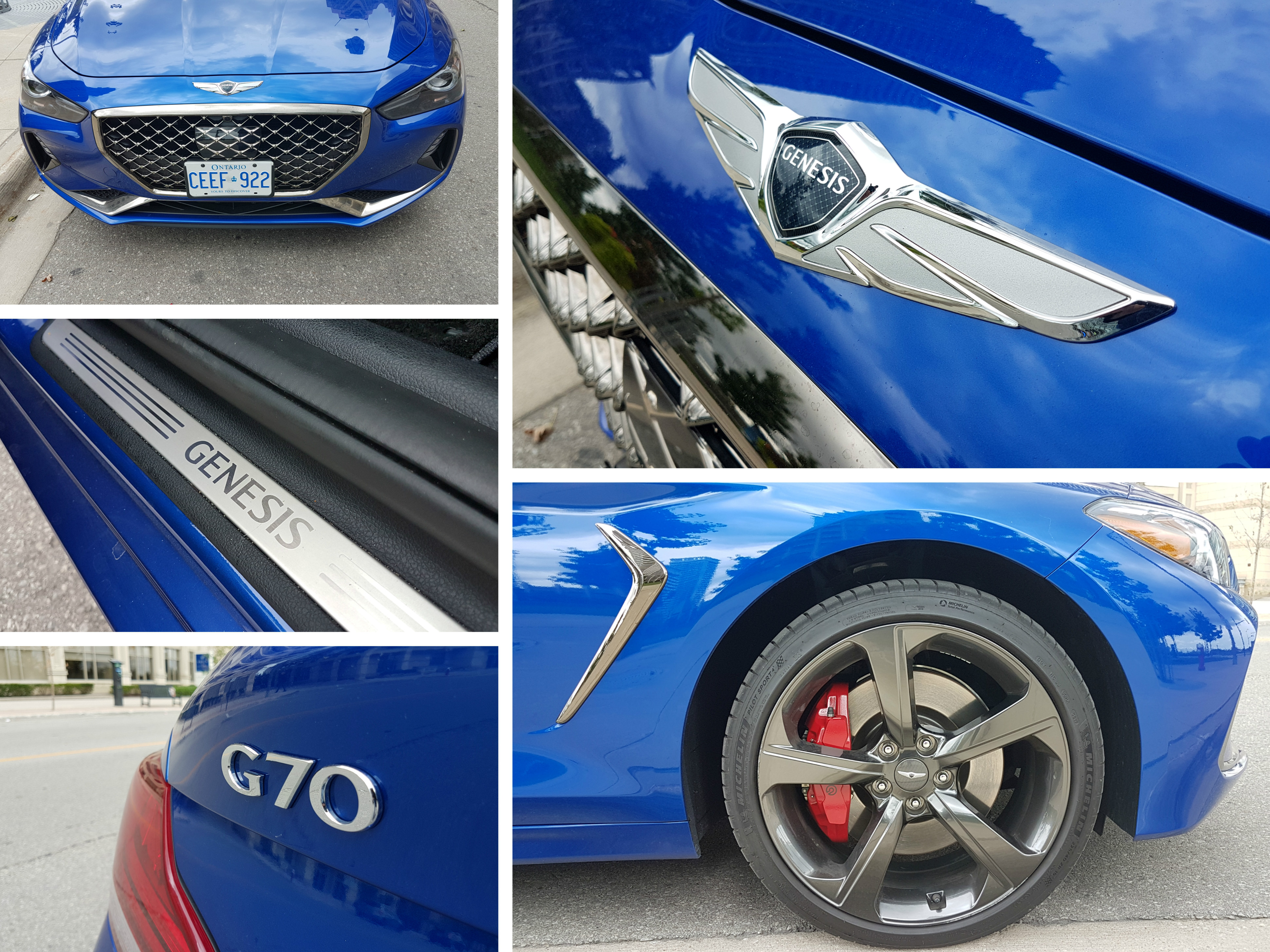 From a design perspective, the G70 sports a much livelier and more aggressive look than its larger siblings, which seems appropriate given the nature of the compact sports sedan segment.

Unlike the G80 and G90, which have a rather staid (but not ugly) exterior appearance, the G70 has a much more adventurous look.

During its launch earlier this year, Genesis indicated the G70 is a hallmark for future design direction known as ‘Athletic Elegance’.

Put it this way, if future Genesis products wind up looking like the G70, I’d say that’s a good thing because the car is real knockout.

From its bulging fenders and short overhangs, to its wedge-shape LED headlights, inverted hexagonal front grille and pronounced body-length character lines, the G70 is a visual tour de force. Its flourishes – like the arrowhead-shaped vents aft of the front wheels and dark chrome trim accents – give the car a distinct presence that separates it from German rivals.

On the inside, the G70 is handsomely finished in quilted Nappa leather, along with an array of soft and medium-touch plastics and metallic-like trim accents that look good and are pleasing to the touch. The liberal use of red stitching (steering wheel, dash cowl, centre console and armrest, etc.) is an effective way of breaking up yards of black materials. 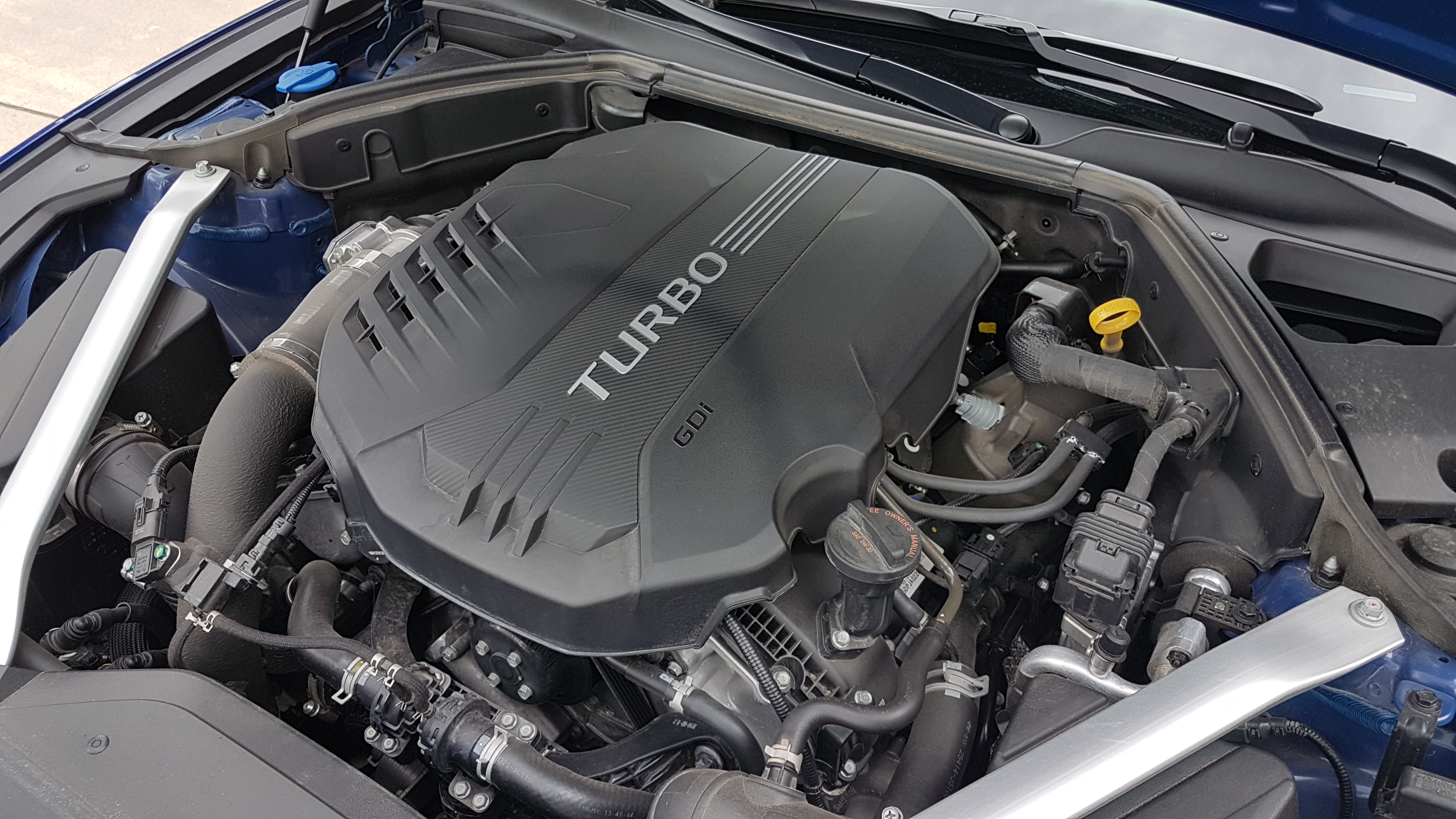 The 3.3L twin-turbo V6 delivers snappy performance and emits a nice growl under acceleration, but its drone is muted enough that it doesn’t become irritating over time. The electric steering provides decent road feel and the variable gear ratio varies the effort nicely based on drive mode setting and driving conditions.

I sampled all driving modes, except for individual, and each provide a noticeably different driving experience. Because I was driving on public roads, I kept the selector toggled to smart and comfort most of the time, although I also tested sport and eco as well.

Summing it up, the first two strike an acceptable balance between performance / handling and comfort, while the latter two are more uncompromising in the pursuit of lively performance (sport) and improved efficiency (eco). The stiffer suspension settings, sharper acceleration, weightier steering and rear-biased AWD in sport mode was the most fun, but I’d say smart and comfort make the most sense from a daily driving perspective.

From an interior comfort standpoint, the G70 delivers the goods. The cabin is reasonably spacious, the heated and cooled Nappa leather seats are quite comfortable (and wrap more tightly around the driver in sport mode!), and the controls and switches are smartly designed and easy to use.

The 8-inch touchscreen which controls navigation, satellite radio and smartphone integration among other features offers both pin-sharp HD graphics and ease of use. It’s a similar story for the 7-inch display in the instrument cluster, which I found to be easy to navigate via steering wheel-mounted controls.

As for nitpicks, I found the twin-turbo V6 to be a bit thirsty (12.8L / 100 km average) and back seat entry and exit can be a bit tricky, although knee, head and legroom was adequate for this six-footer.

While it’s too early to know if it will become a conquest vehicle for Genesis – the Germans tend to enjoy a good deal of brand loyalty – the G70 is a worthy new entry in the ultra-competitive compact executive sedan market. 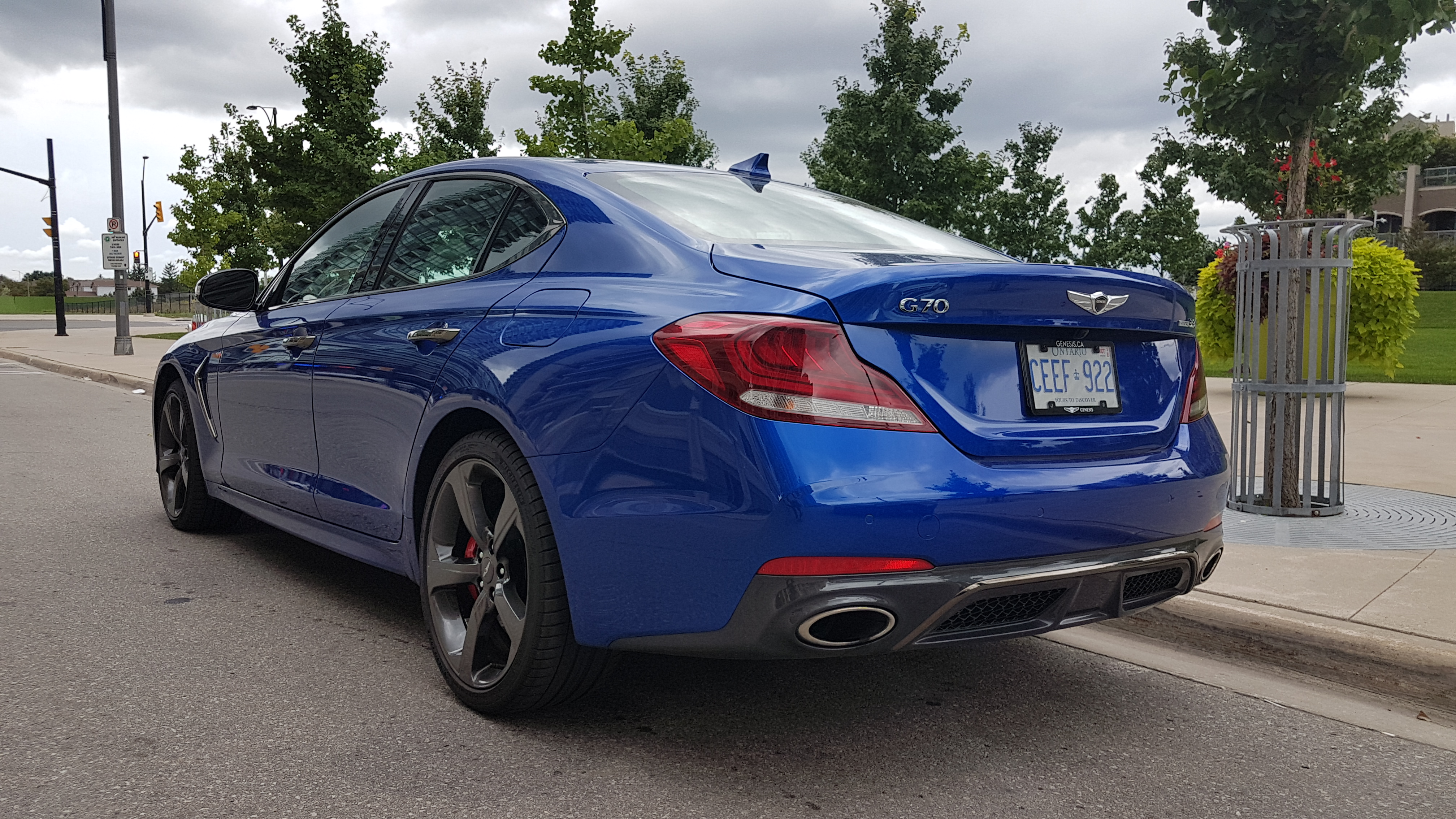 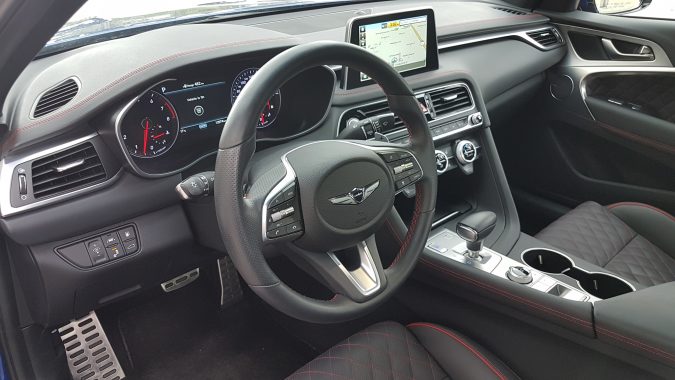 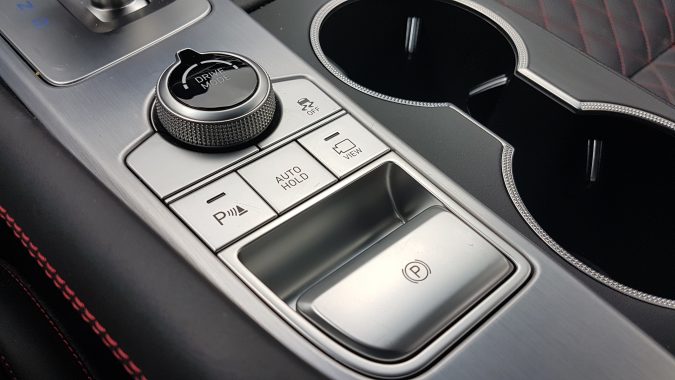