Who Says You Can’t Go Home?

The luxury division of General Motors is at something of a crossroads. It packed up and left home in 2015, setting out on its own to try and find itself in New York City. After three years in the Big Apple, a city where the majority of denizens don’t drive, let alone own a car, Caddy moved back into its parent’s place in Detroit, where it presumably brought along piles of laundry and half-eaten slices of pizza.

The all-wheel drive crossover market is red-hot, has been for a while, and shows no sign of cooling. While its competition from Japan and Germany manufacture the things in all shapes and sizes, Cadillac had but two options: a mid-size XT5 and the larger-than-life Escalade family. As for the sedan side of the business, its flagship CT6 has a muddy future, the ATS and CTS will soon be replaced by a single model, and even your Uncle Ellis has forgotten about the XTS sedan.

This XT4, then, couldn’t come at a better time. It, along with the just-announced three-row XT6 crossover, will round out Cadillac’s portfolio very nicely and put it on a competitive field with other luxury automakers.

Cadillac’s naming convention still sucks, endowing this compact luxury crossover with a mish-mash of alphanumerics that’s only set to get worse with the introduction of silly newton-metre appendices (with its 258lb.-ft of torque, the XT4 will eventually earn a ‘350’ badge). The current model names were introduced by former boss Johann de Nysschen, the man who told the brand to pack its bags for New York. He recently got canned harder than spaceship spam by GM brass, so your author was hopeful a Lincoln-like return to real names was in the offing for Cadillac. Alas, it appears not to be so. 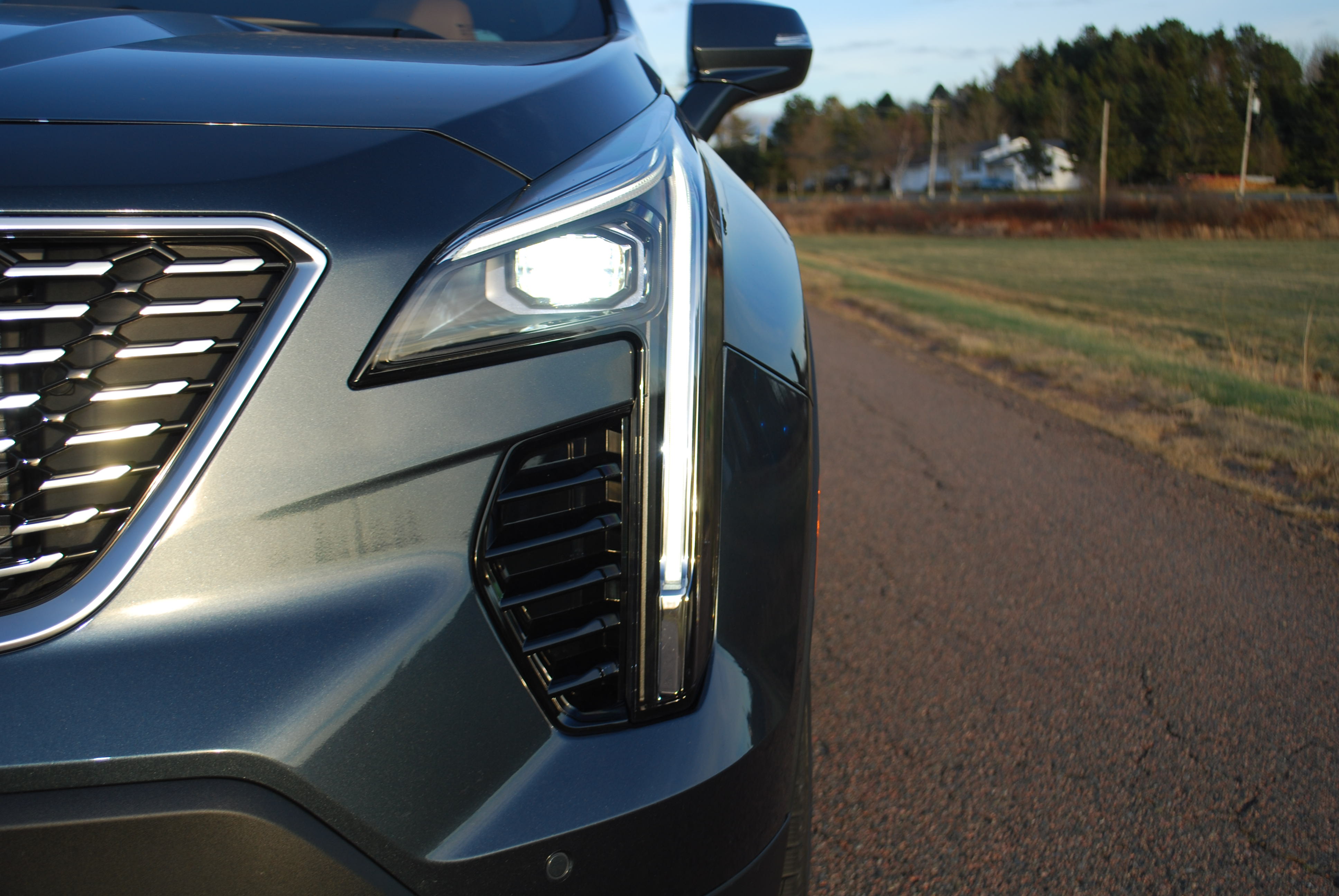 Under the hood of this Cadillac is a new 2.0L turbocharged four-cylinder engine. This will be the sole choice for now, making 237 horsepower and 258lb.-ft of torque. This is funneled through a nine-speed automatic transmission and directed to the pavement by way of a twin-clutch AWD system that can mete power to individual rear wheels and even decouple from the rear axle altogether in a bid to save fuel. It worked exceptionally well in a mess of late-winter snow and slush, a distressing amount of misery that fell from the sky not 24 hours after these pictures were taken.

Modern turbocharged engines have gotten very adept at masking turbo lag, a characteristic which once plagued boosted mills. The XT4 turns this trick as well, delivering power promptly when the driver calls down to the engine room for more steam. Its personality at idle is more coarse than it should be for a machine wearing a Cadillac badge but, once underway, is an eager partner whose peak torque is available at just 1500rpm. Its suspension plays extremely well with Nova Scotia roadway that look as if they have been lifted wholesale from rural Beirut; your author suspects XT4s equipped with the smaller 18-inch wheels would ride even better.

Inside the XT4, Caddy has chosen to mimic the design language of its other vehicles, a wholly sensible decision which surely appeals to its customer base. Having binned the capacitive touch slider controls of previous Cadillac models, the XT4 deploys solid-feeling switchgear presented in a clutter-free manner that looks good and feels price-appropriate.

A revamped infotainment system buries the complaints about the old system, offering up fast response times and crisp graphics. Drivers can choose to issue commands via a new dual interface using either easy-to-understand redundant buttons placed down by the shifter or poking at the touch screen. A voice system is also available and made your author chuckle on one occasion, once issuing a curt ‘Yes’ in response to an inquiry using a vocal tone not unlike one hears while being admonished by a stern headmaster for smoking in the school washroom. That’s a purely hypothetical situation, by the way. 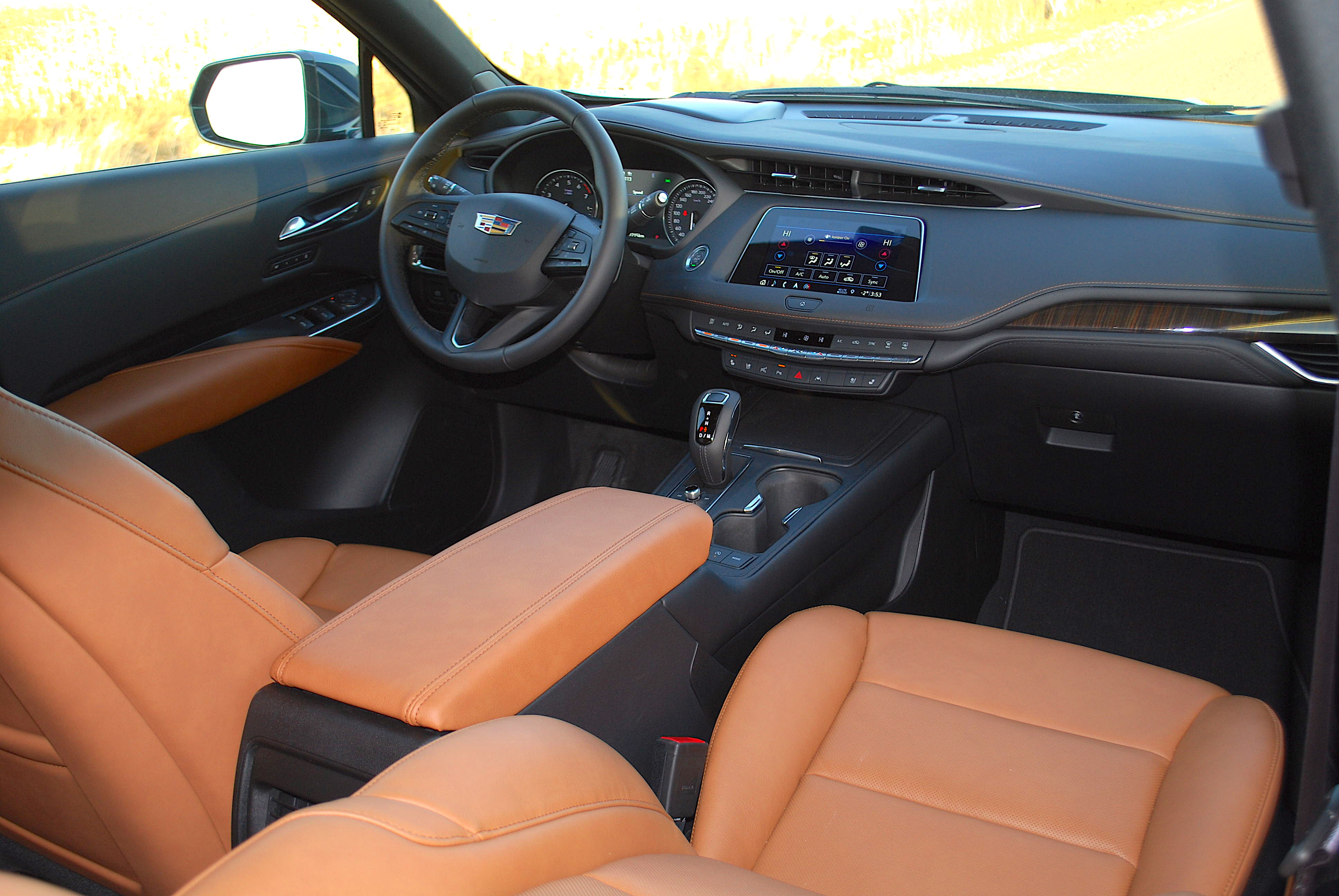 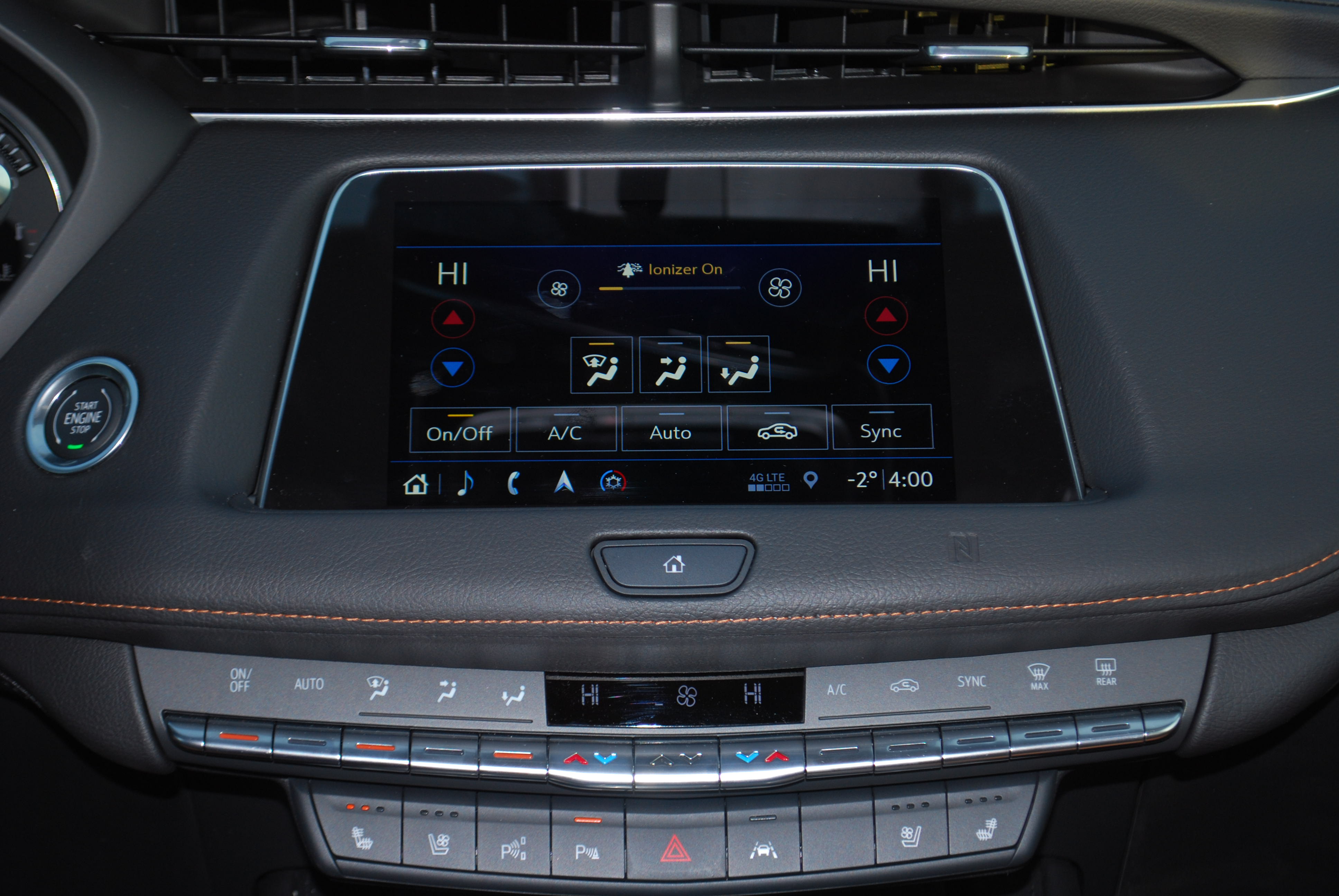 This new XT4 is lined with materials of much superior quality than your author encountered on the seats and steering wheel of machines from this brand not long ago. The peanut-butter leather extends down the side of the centre console and drive tunnel, while contrasting stitching snakes its way across the dashboard like a Hollywood map to the stars. A head-up display shows scads of information in a logical manner, refreshing in a segment where most HUDs are an afterthought and need to be studied like tax forms.

Leg- and headroom is more than adequate for those seated in the front row of chairs but anyone of NBA-stature (*raises hand*) will find their pate caressing the headliner while seated in the second row. If your family includes a couple of quickly-growing youngsters, it would be wise to sample the larger XT5 crossover. The cargo area is well-shaped, making the space more useful than some competitors whose same space is intruded upon by suspension bits.

Outside, there’s no mistaking the XT4 for anything other than a Cadillac. Expressive headlights serve as wide-eyed peepers up front, while a set of tall rear lamps are obstinately meant to evoke tail fins of yore or at least the sky-high units found on its big brother Escalade. Speaking of, engineers have smartly incorporated a neat hidden rear wiper just like the one on this brand’s halo SUV, a styling decision that certainly cleans up the rear. It’s hard to stand out in the crowded sea of compact crossovers but Cadillac stylists are putting forth a good effort.

Our tester, dressed in an upscale Premium Luxury trim that comes standard with all-wheel drive, bore a base price of $42,975. This is a sum very much in line with competitors from Japan and Germany. However, options were ladled upon this crossover thicker than gravy on a turkey dinner, bringing the as-tested price to an eye-popping $58,510 including destination charges. At that lofty price, shoppers are better off checking out the larger XT5.

If the XT4 is your target, however, one can replicate the experience of our test car without loading it to the gunwales with expensive options. Buying advice? Bin the $1795 sunroof, leave the $1265 20-inch wheels back at the factory, and forgo the driving assist nannies which add a combined $3985 to the tab. Its $1895 navigation system is also questionable.

Employing restraint on the options sheet will reward buyers with a comfortable, leather-lined, all-wheel drive Cadillac for well under fifty grand. Its massaging seats will coddle you on the commute, its compact dimensions will allow it to fit in the downtown parking garage, and its new infotainment system won’t have you reaching for the Tylenol. That’s more than enough for most buyers and proof that sometimes it is okay to move back home. 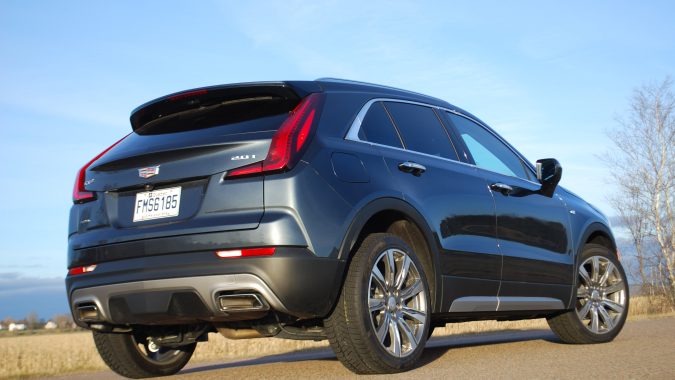 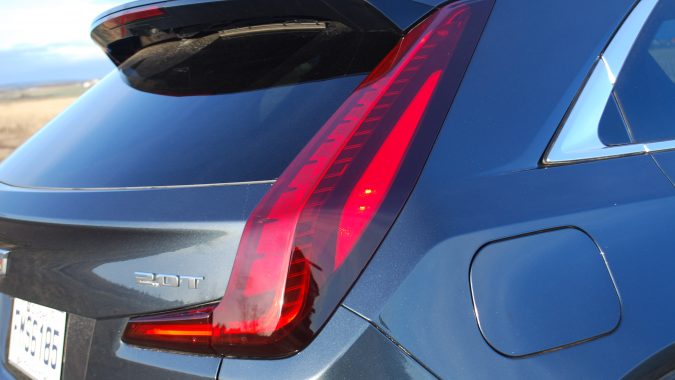 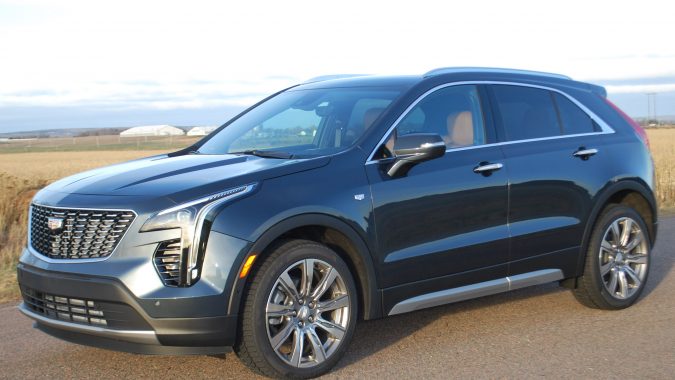 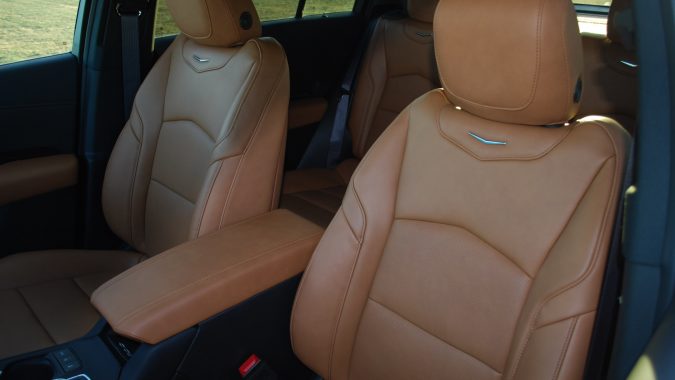