Working in automotive product development and marketing is a difficult job. Creating a nameplate for an all-new model is a task roughly on par with trying to round up a class of Kindergarten kids at recess time. Customer preferences are all over the place, mid-level managers are hollering for results, and don’t forget to make sure the car’s new name doesn’t translate into something rude in other markets.

It’s almost easy to understand why some manufacturers throw up their hands and move to an inscrutable alphanumeric naming convention. I am glad Buick did not choose the latter route.

Buick manages to incorporate a couple of meaningful words into this, its largest crossover. Enclave is a snazzy word for a distinct clutch of people living amongst, or completely surrounded by, another group of humans. Avenir takes much less time to explain, as it is a French word referring to the future.

While we’re on the subject, Buick introduced the Avenir sub-brand to denote its top shelf models. Think along the lines of corporate stablemate GMC’s Denali sub-brand and you’ve got the general idea. Unlike the truck brand, which allowed Denali the time to percolate in the minds of consumers and actually have a chance to gain a shred of cachet, Buick quickly appended Avenir to almost all its vehicles the moment it showed a glimmer of promise (and profit). We’ll see how that speedy decision plays out in a fickle marketplace.

With both Enclave and Avenir in its name, your author decided to take the Buick on a day trip to a part of Nova Scotia heavily influenced by French culture. It is an area of the province that was once so heavily populated, in fact, that it was considered to be the capital city long before tony Halifax earned that title. Unlike the ‘fax, it never inducted the donair as its official food, however, probably because it hadn’t been invented yet.

Wending our way through the back roads of Nova Scotia towards the province’s French quarter, the Buick’s power team of a 310 horsepower 3.6L V6 and nine-speed automatic transmission busied themselves in the background like dutiful butlers who take care of your needs but are never intrusive. Serenity, thy name is Buick.

This Avenir model was equipped with the Premium Ride suspension package, part of a $2475 Technology Pack that also includes the likes of adaptive cruise control and forward automatic braking. Let it be said that those latter two items should be included as standard kit in a three-row crossover with luxury pretensions stickered north of sixty grand. 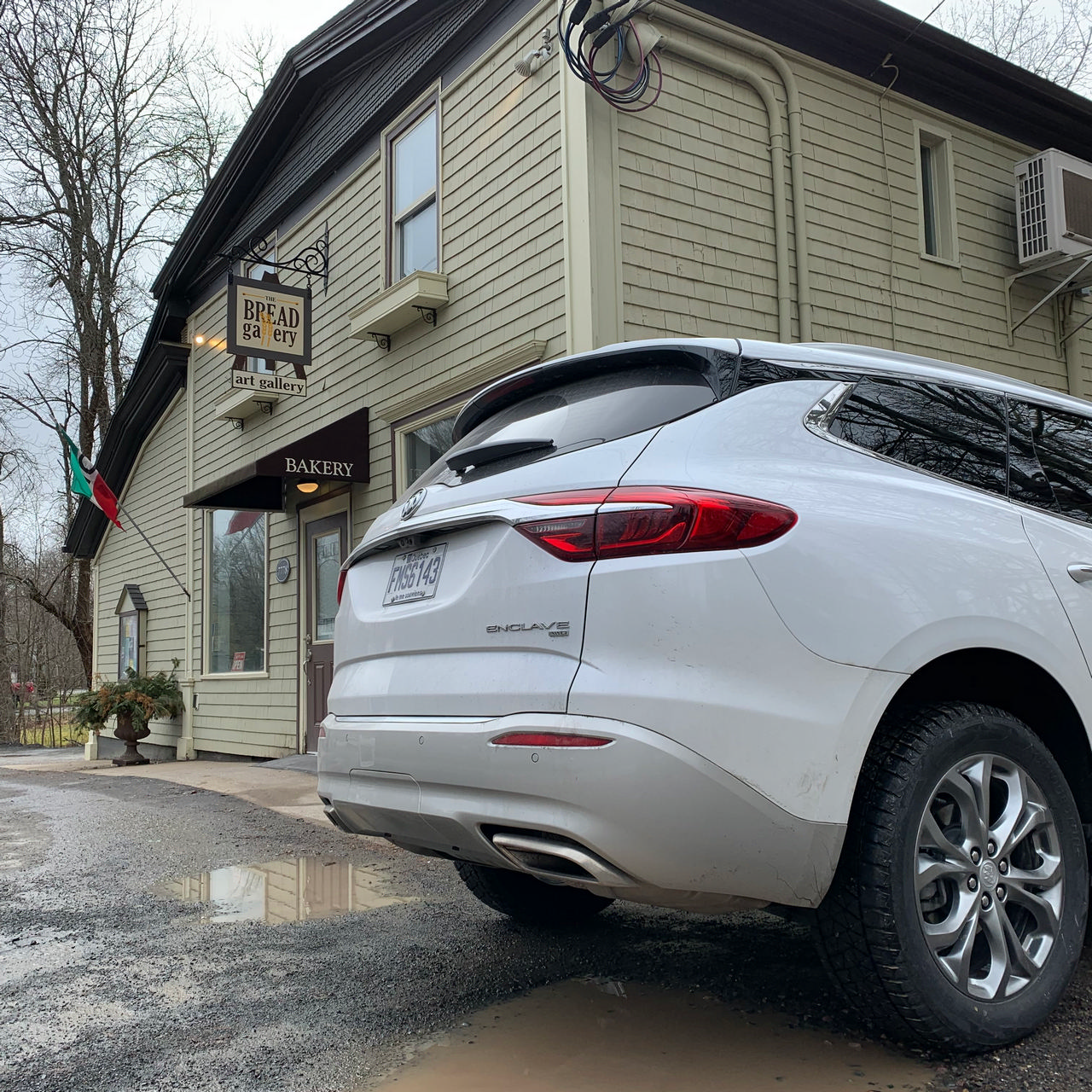 The snazzy suspenders did a good job of taming the 2125kg Buick over Nova Scotia’s shockingly undulated road network but it is definitely a suspension tuned for comfort, not performance. This ain’t no Mazda CX-9, for example. However, given the Enclave’s intended purpose and target demographic, this is not a wholly bad thing.

Halfway to our destination, we stumbled across a too-perfect local bakery, packed with fresh goods including a yaffle of warm chocolate chip cookies of which your author ate entirely too many. The proprietor, whose charming rural Nova Scotia twang told us this wasn’t the first batch of cookies to emerge from her oven, sent us on our way fed and fortified.

The Enclave likes to be fed a steady diet of regular fuel, notable in a segment where far too many rigs demand high test. An 83-litre fuel tank assures a bladder busting freeway cruising range of nearly 900km, having earned a highway fuel economy rating of 9.5L/100km from nrCan (future Buick mechanics take note: it’s a different tank than the front-wheel drive Enclave). Our tester returned an observed 10.9L/100km on a week’s worth of travelling in mixed driving conditions. Expect to get around 700km out of a tank in those conditions.

Convention says there’s not much a styling department hamstrung by bean counters can do to jazz up the basic two-box shape of a large crossover. Buick gives it a shot, appending a chrome spear at the leading edge of the driver and passenger door while incorporating Buick’s new lighting signatures to full effect. It’s a big bus, measuring 5189mm which is within a hair of the large-and-in-charge Chevy Tahoe. Legroom and cargo space are best measured in acres – there’s 688L of the stuff behind the third row, 1643L of it if you turn this bus into a four-seater.

Drivers will be reminded of GM’s bean counting department every time they signal for a turn, as the stalk – in this tester, at least – creaked like a cheap plastic toy from McDonald’s when moved north or south. It is unfortunate, as most other touch points are suitably posh given the Enclave’s price tag. It is also a bit of a rip that the handy wireless charging pad is only included on the Avenir trim.

There are no disappointments with interior space, at least in the first two rows. Middle row thrones have swing down armrests on their inside edges, an omission committed by a surprising number of Buick competitors. Third row space is what’s to be expected, which is to say two people under six feet tall should fit just fine. 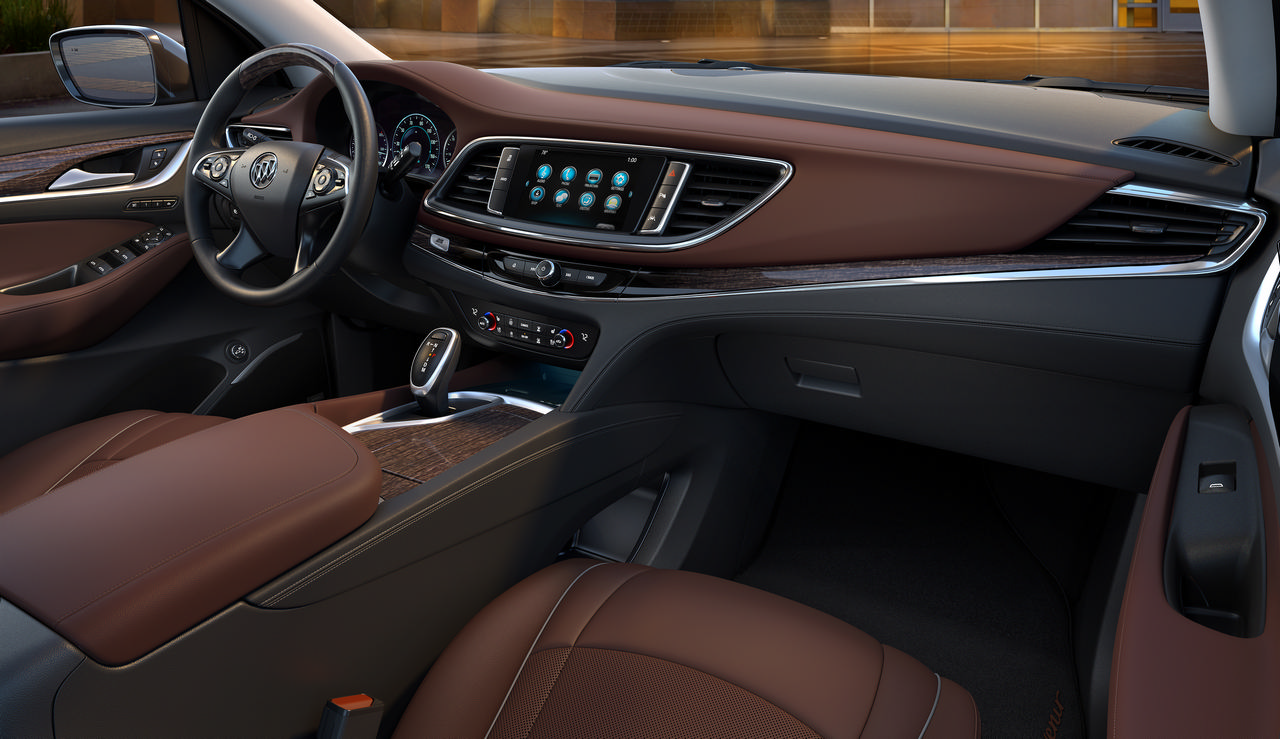 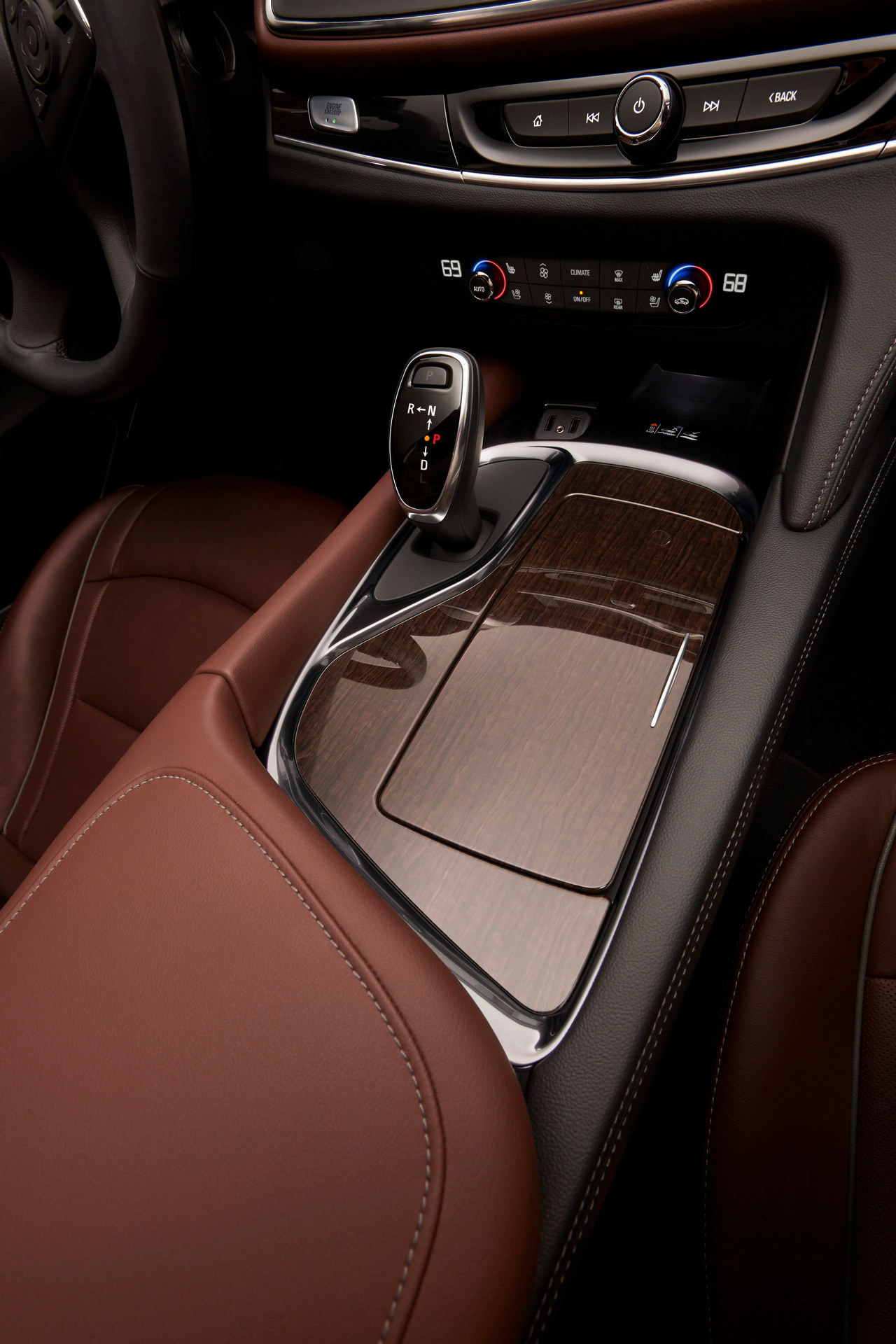 Rolling into the Grand Pre area of Nova Scotia, we head for the dykes, a spot where the area’s original French settlers carved out an incredible 3013 acres of farmland below sea level. The wild Atlantic waters are kept at bay behind 28,455 feet of hand-built dykes, constructed at a time before any one even imagined a Caterpillar tractor. Today, it’s home to vast fields of crops and is maintained by the Department of Agriculture. Given the late-Spring thaw, side roads were a slippery mix of muck and mud. The Avenir’s all-wheel drive system, able to mete power front to back and left to right, worked for its lunch.

Buying advice? If you find yourself in a Buick dealership looking at an Enclave, one would be well served to stick with the base Essence trim. Seriously. It has heated leather front seats, an 8-inch touchscreen infotainment system with Apple CarPlay and all the toys, tri-zone climate control, and a legion of other family friendly amenities. It stickers at $51,100 – exactly $11,000 less than the starting price of our tester. Customers who select the Essence trim can even get a natty black and brandy interior colour scheme at no charge.

Better still, sample the Regal Sportback GS. It has the same engine as this Enclave, all-wheel drive, and – thanks to a hatchback body style – a not insignificant 892 litres of storage space with room left over for five real-sized humans. No one will, of course, because it isn’t a tall crossover or SUV.

So it’s back to the Enclave. Keep an eye on the option count and you’ll end up signing the note on a big, three-row machine that is quiet and endlessly comfortable. At the end of the day, that’s all most buyers want. 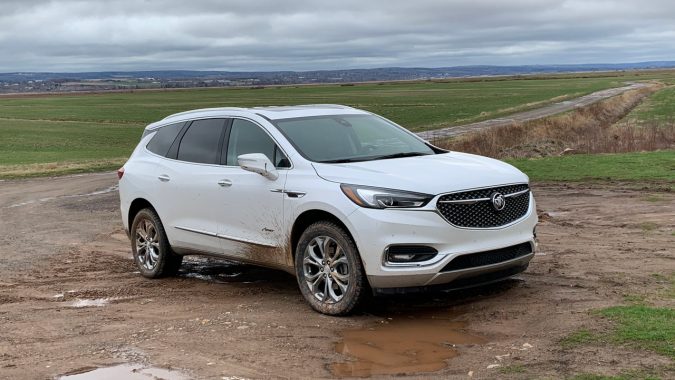 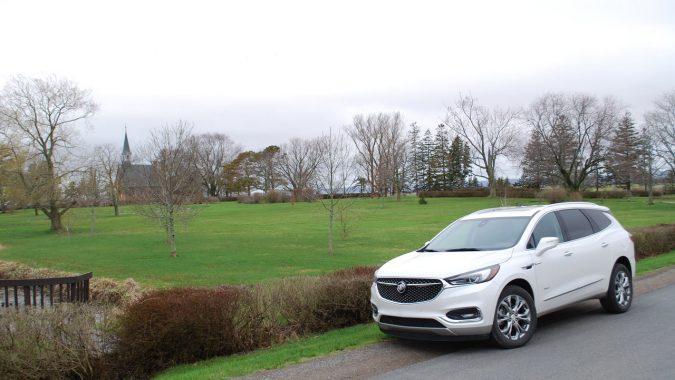 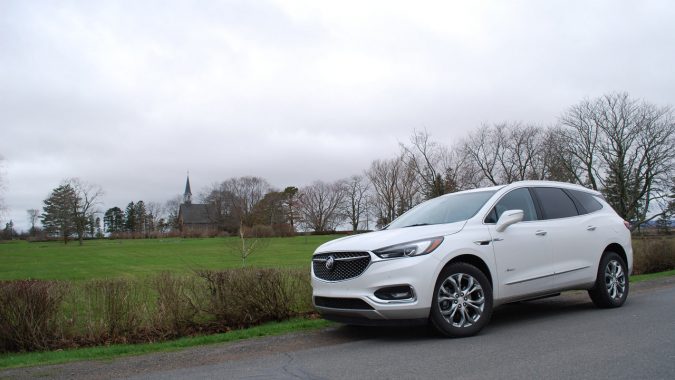 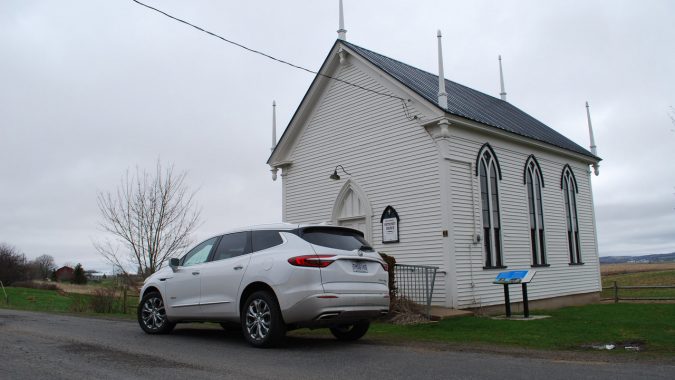 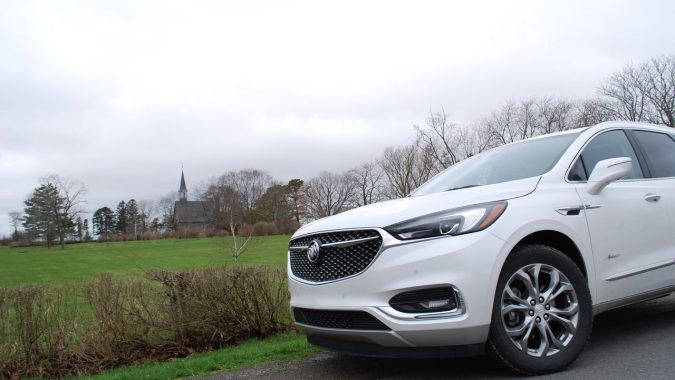 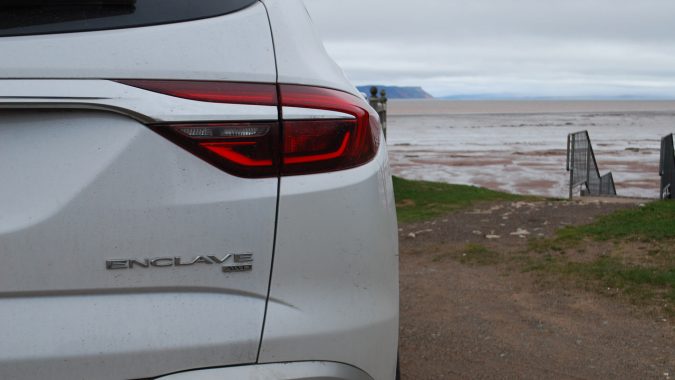 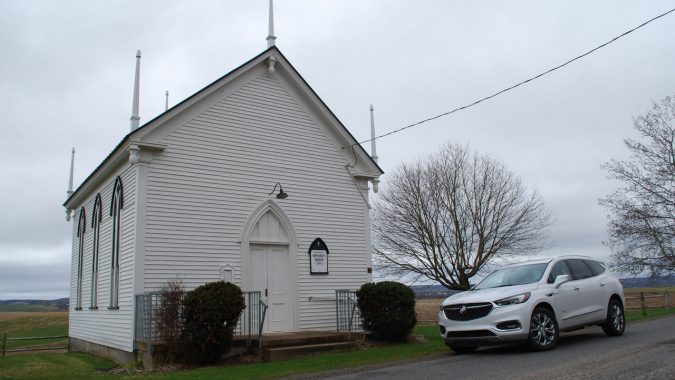 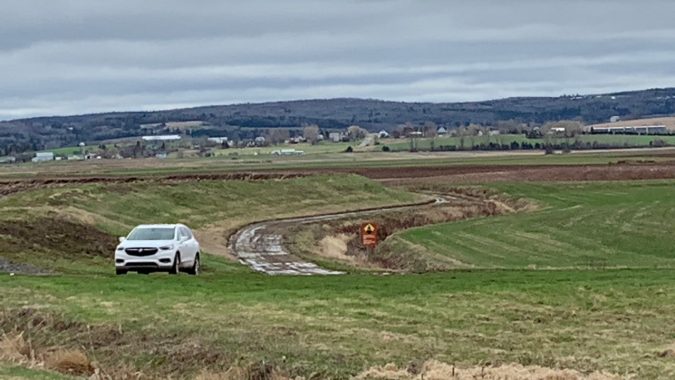 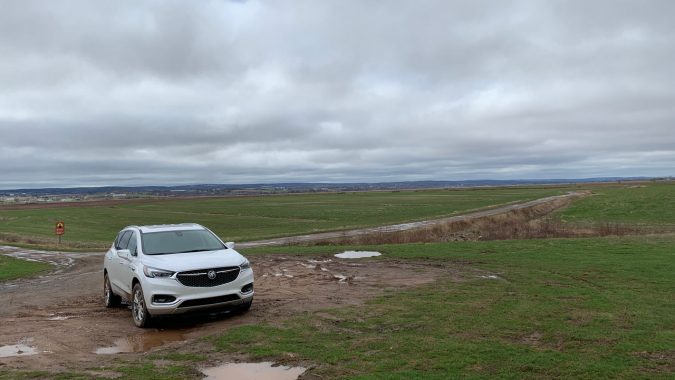