Better Get In Line

Every single one of us have waited in line at some point or another in our lives. Most times, it is so we can complete a menial task like paying for groceries or picking up the morning coffee. On occasion, though, it’s for something totally fun – getting in to see your favourite band or trying out that new roller coaster.

But the refreshed 2019 Audi TT RS shown on these digital pages? It’s a speedy whip with a unique inline-five engine that definitely falls into the latter category. Capable of flinging itself to 100km/h from rest in a mere 3.7 seconds, this is one of the few lines in which there is no waiting.

The sonorous 2.5-liter engine of the TT RS delivers that distinctive five-cylinder sound, one that is unmistakably Audi and harkens back to the original turbocharged five-cylinder, the Ur-Quattro. [Quick history lesson: the prefix “Ur” is used in German circles to refer to “original” or “first of its kind”, like OG on this side of the pond #TheMoreYouKnow]. Its gonzo 1-2-4-5-3 firing sequence allows the ignition to alternate between the adjacent cylinder and those further apart and gives the TT RS a rhythm all of its own.

Generating, near-as-makes-no-difference, 400 horsepower (394hp for you bedwetting pendants in the audience) and 354 lb-ft of torque, the TT RS grips the pavement like a frightened cat grips fabric. Quattro is standard, a permanent all-wheel drive system with the ability to send nearly 100 percent of available torque to the rear wheels. Its traction control system is specifically calibrated for the TT RS, managing power distribution like a stern headmaster. 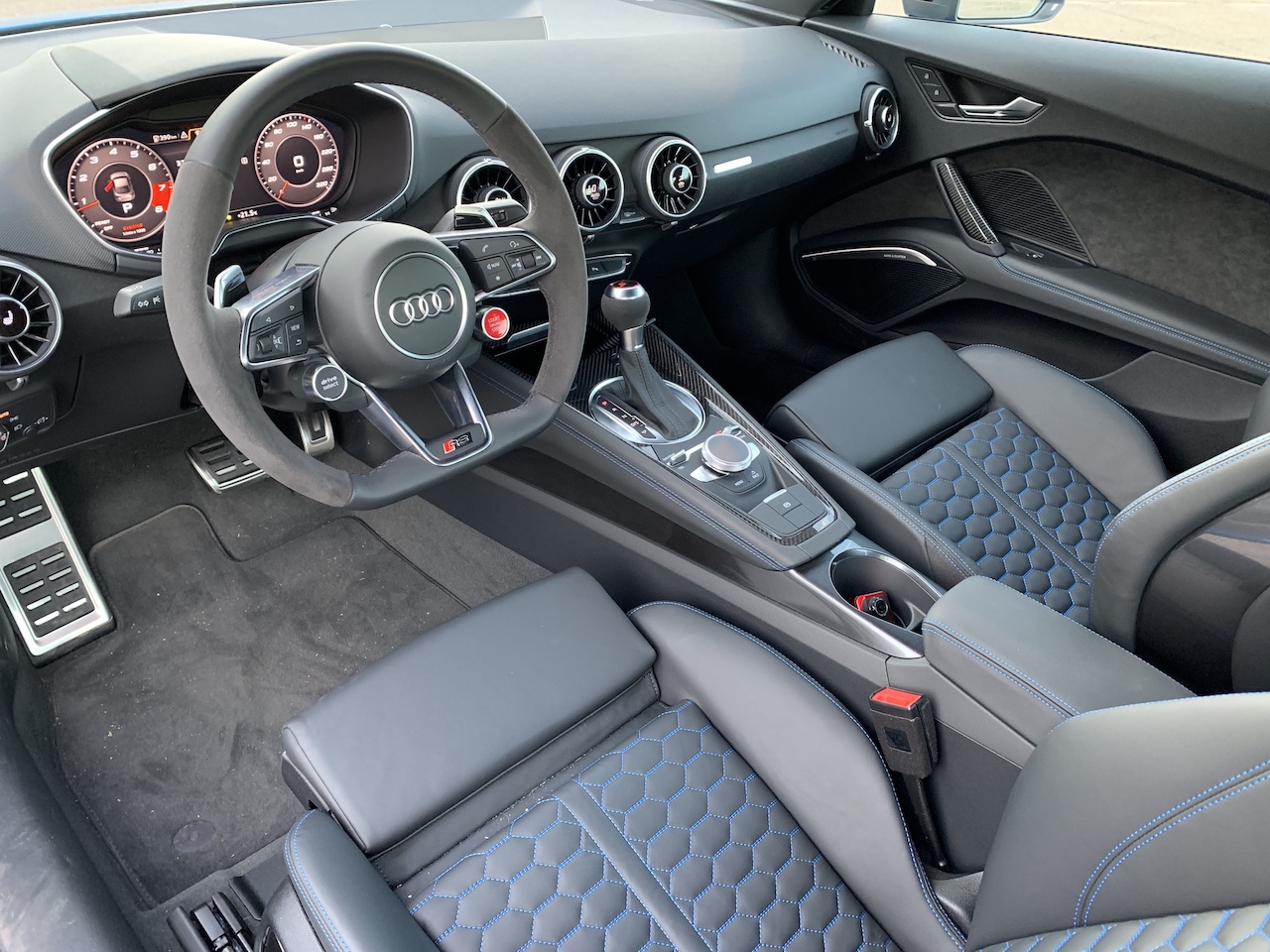 With a seven-speed S tronic dual-clutch transmission at the ready, TT RS has a launch control program that Audi describes as delivering “a heightened level of acceleration”. In the real world, it can be described as a physics defying takeoff that seems to bend space-time while reliably stirring both the heart and the trousers of your gearhead author.

Utilizing launch control flings the TT RS towards the horizon like cauliflower hurled from a child’s plate. A not-complicated dance of buttons and pedals- performed on a closed course, natch – sets the engine alight at a constant 3750-ish rpm until the driver releases the brake pedal at which time the landscape starts to get really blurry. Felonious speeds come up quickly, as does the 7000rpm redline. The car will take care of the 1-2 shift for you but you’re on your own after that, so remember to flick that flappy paddle to access third gear. 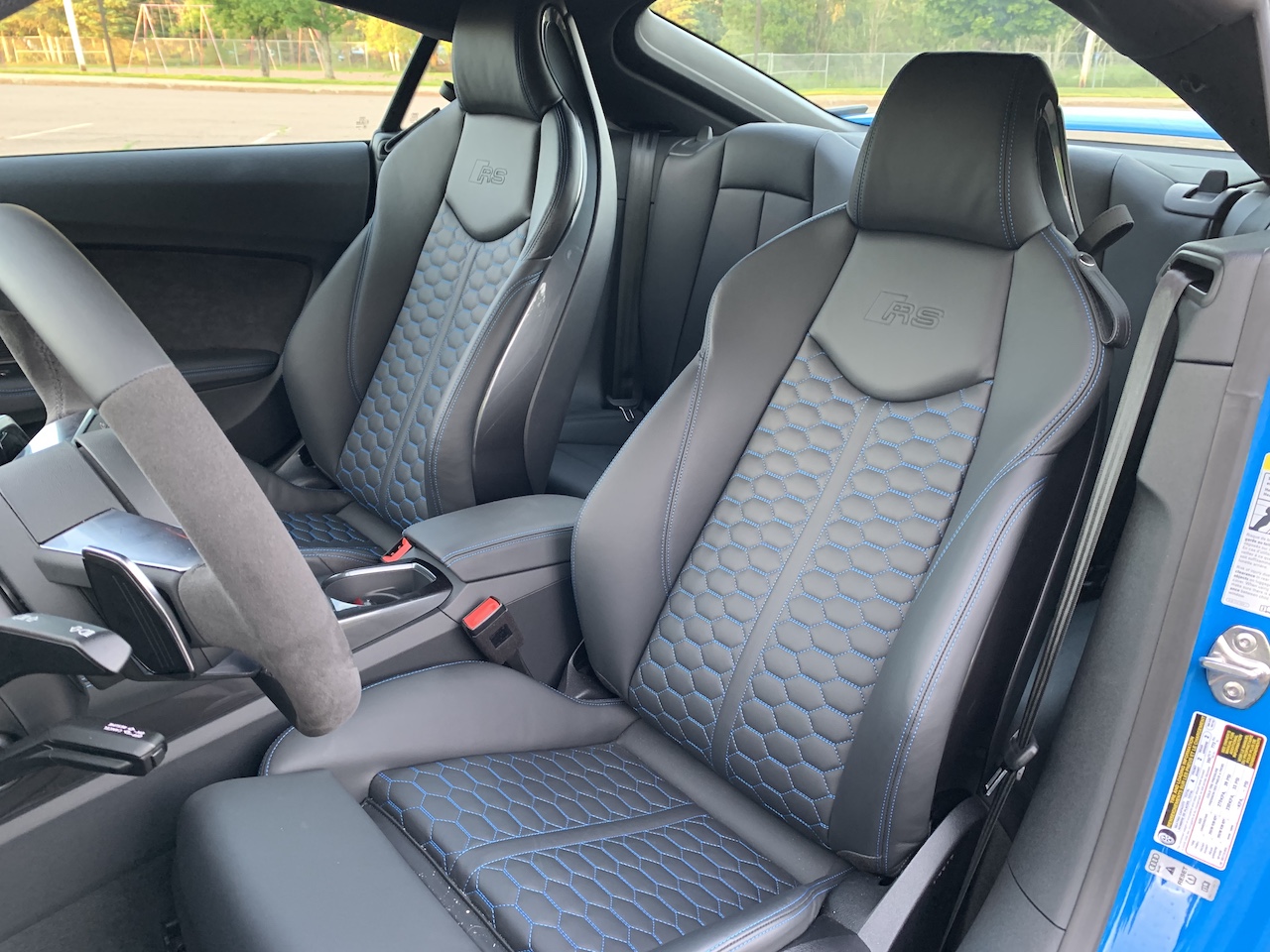 Around town, Dynamic mode is a bit frantic but the preferred choice for this hyperactive gearhead. Remember to slap the gear selector south into ‘S’, not ‘D’, once underway to make the most of that optional sport exhaust which will bark on downshifts. The exhaust button, located just fore of the shifter, turns carbon dioxide into noise.

Audi’s styling choices for this year’s TT RS have resulted in the most aggressive-looking TT to date. Wearing no-charge Turbo Blue paintwork (unlike corporate cousin Porsche which charges handsomely for the good hues) and a $750 Black Optics package, our test car had a natty matte black grille with Quattro script spelled out below it in matte titanium. Additional radiators peer out from behind the bumper’s honeycomb jowls, functional units which allow for improved cooling. 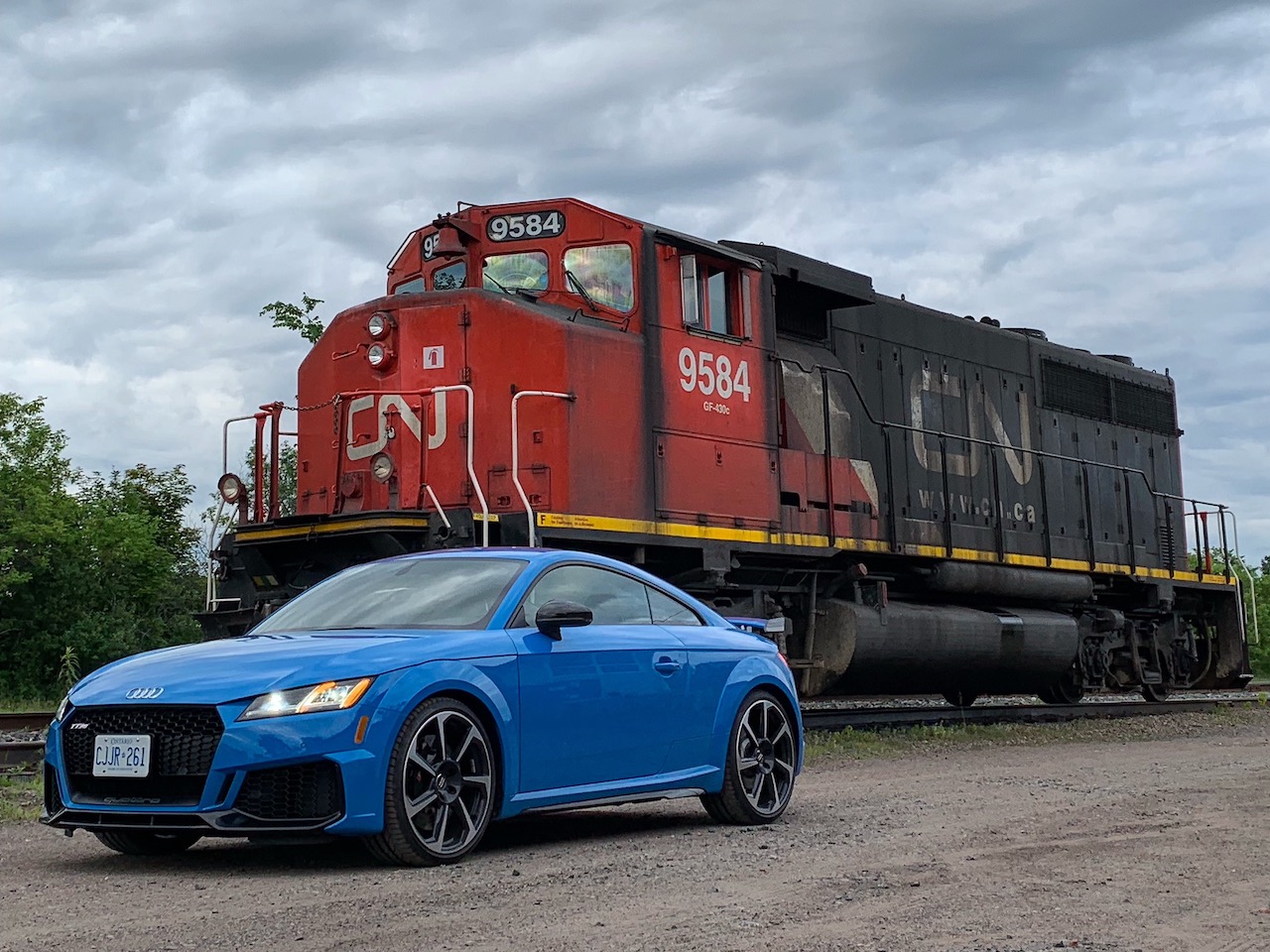 For 2019, there are few changes to the interior but they are of the variety that are worth noting. The USB ports, for example, still reside under the covered bin ahead of the chrome shift lever but have been moved from “up there somewhere” to a position that’s actually visible.

The fuzzy Alcantara steering wheel will look very familiar to R8 owners, peppered with buttons like the tiller in an F1 car, including a blazing red start/stop button over which your author’s thumb often lingered unnecessarily after parking the car. This application of Audi’s virtual cockpit suite of digital gauges is top notch, offering everything from expansive maps to g-meter readings. Tall and supportive seats hug your torso like a naughty co-ed.

Complaints are few. The ride in Dynamic mode, when paired with this car’s 30-series Pirellis, is less comfortable than being stabbed with a serrated hunting knife. Also, thanks to the height and construction of the aforementioned fabulously supportive seats, passenger-side rear three-quarter vision is good if compared to having a bag on your head or being blind. Blind-spot monitoring is a godsend. A quick rip through the gears forgives these sins. 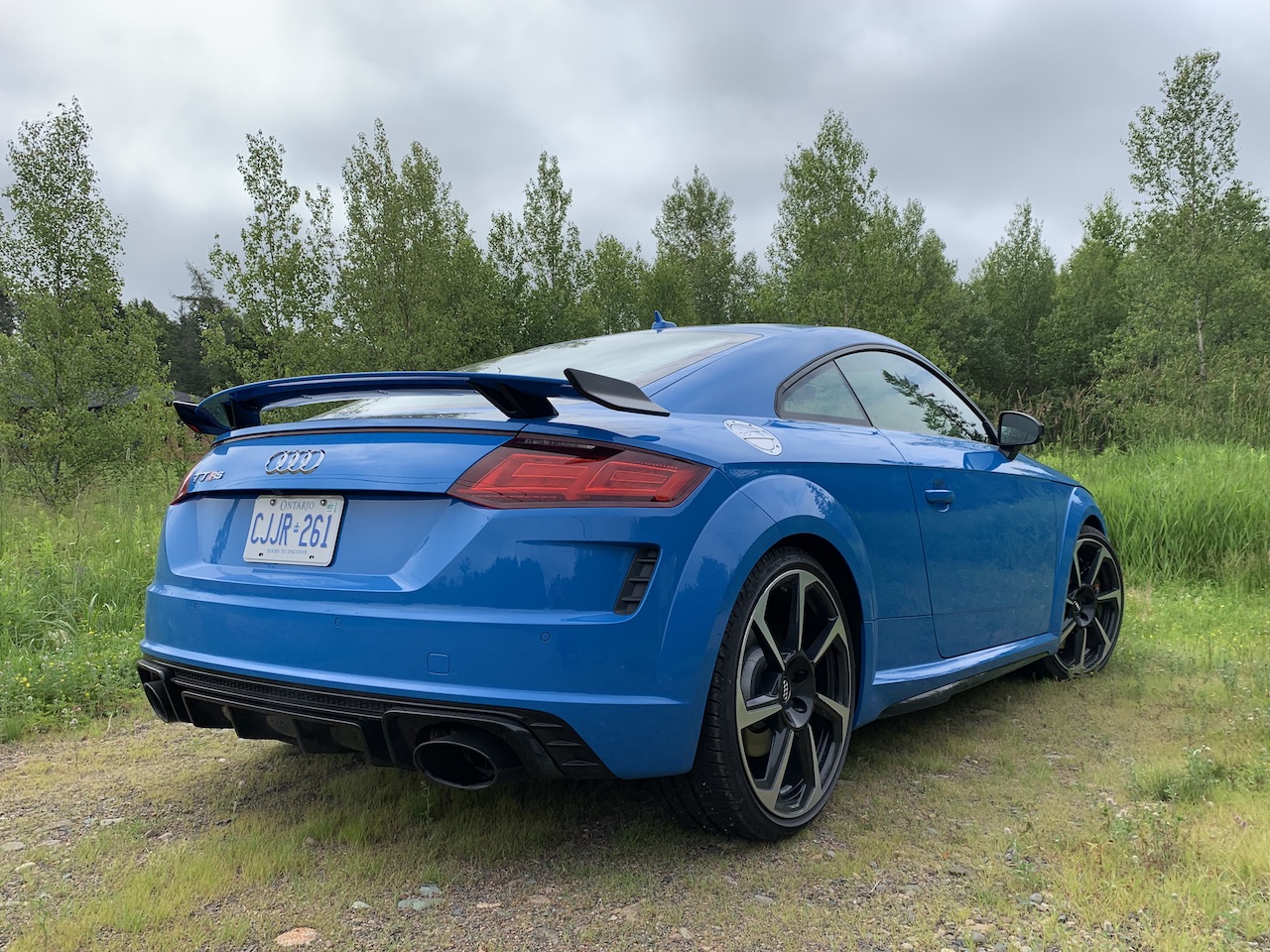 Another reason why fans of speed who have the means to pick up a TT RS should get in line? There’s an excellent chance the version you see here will be the last of the breed. With other premium manufacturers hurtling towards electrification in their sporty lines, it would surprise your author not one whit if the next TT finds itself packing a load of batteries and electric motors. After all, Audi is in the middle of a campaign to cut costs and use the saved money to finance the development of EVs and other technologies.

There’s also the matter of the current interior style, one which is gorgeous but completely out of lock-step with the dual touchscreens proliferating across the rest of Audi’s lineup. Nothing short of a complete rework of the car and its hard points will allow for such a setup, another sign along the road leading to the conclusion that this TT family will be the last of its kind when the design cycle comes to an end in about three years.

Until then? Saddle up and enjoy that funky straight-five roar. Standing in line has never been so much fun. 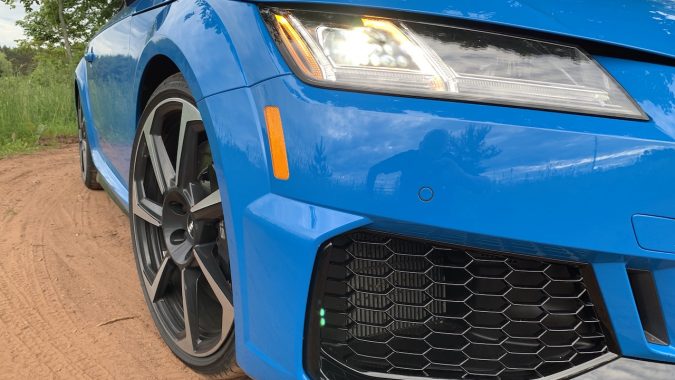 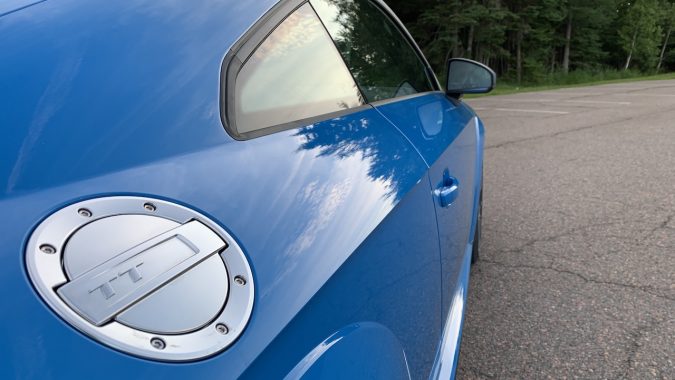 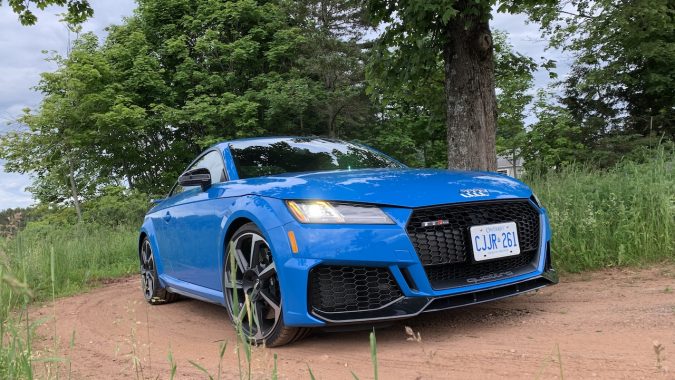 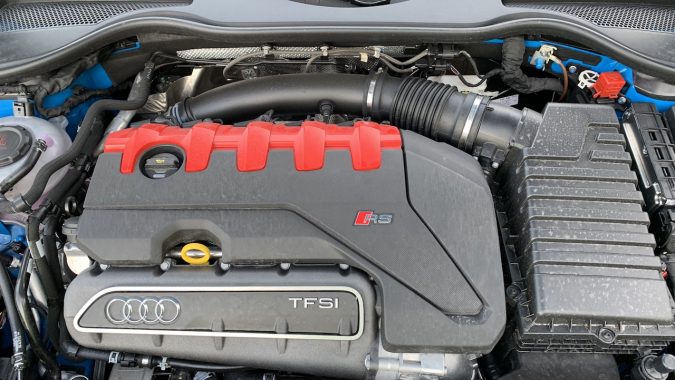