Despite the relentless tide of crossovers and SUVs, a few switched-on auto manufacturers are continuing to invest in large sedans. The trio of Germans from Munich, Stuttgart, and Ingolstadt are well into the mix, renewing and refreshing their four-door limousines onto the zenith of plushness and the bleeding edge of technology.

The new Audi A6 reads from both of those hymnbooks with clarity. The former is taken care of by the likes of massaging front seats and trick aero acoustic glass; the latter by a gee-whiz MMI touch response system with more computing power than all the moon landings combined (probably). But let’s begin with the first things your neighbour will see: its new sheetmetal.

Its exterior has a certain amount of Germanic gravitas not found in its competitors. Its bodyline creases are sharp and crisp enough that it seems they could cut careless bystanders to shreds and the company’s new take on their own lighting signatures – front and rear – is just fantastic. In a tremendous bit of subtle theatre, the rear lamps blink in a sequential pattern when the doors are locked, creating a light show rivalling that of any hotel sign on the Vegas strip. So entranced was your author, in fact, that his thumb lingered unnecessarily on the A6’s keyfob with alarming regularity.

The subtle theatre continues inside, where occupants can opt for multiple interior illumination accents, creating an environment that can mimic a nightclub if the right combination of colours are chosen. Or, simply shut it off if you’d rather have a dose of German stoicism. 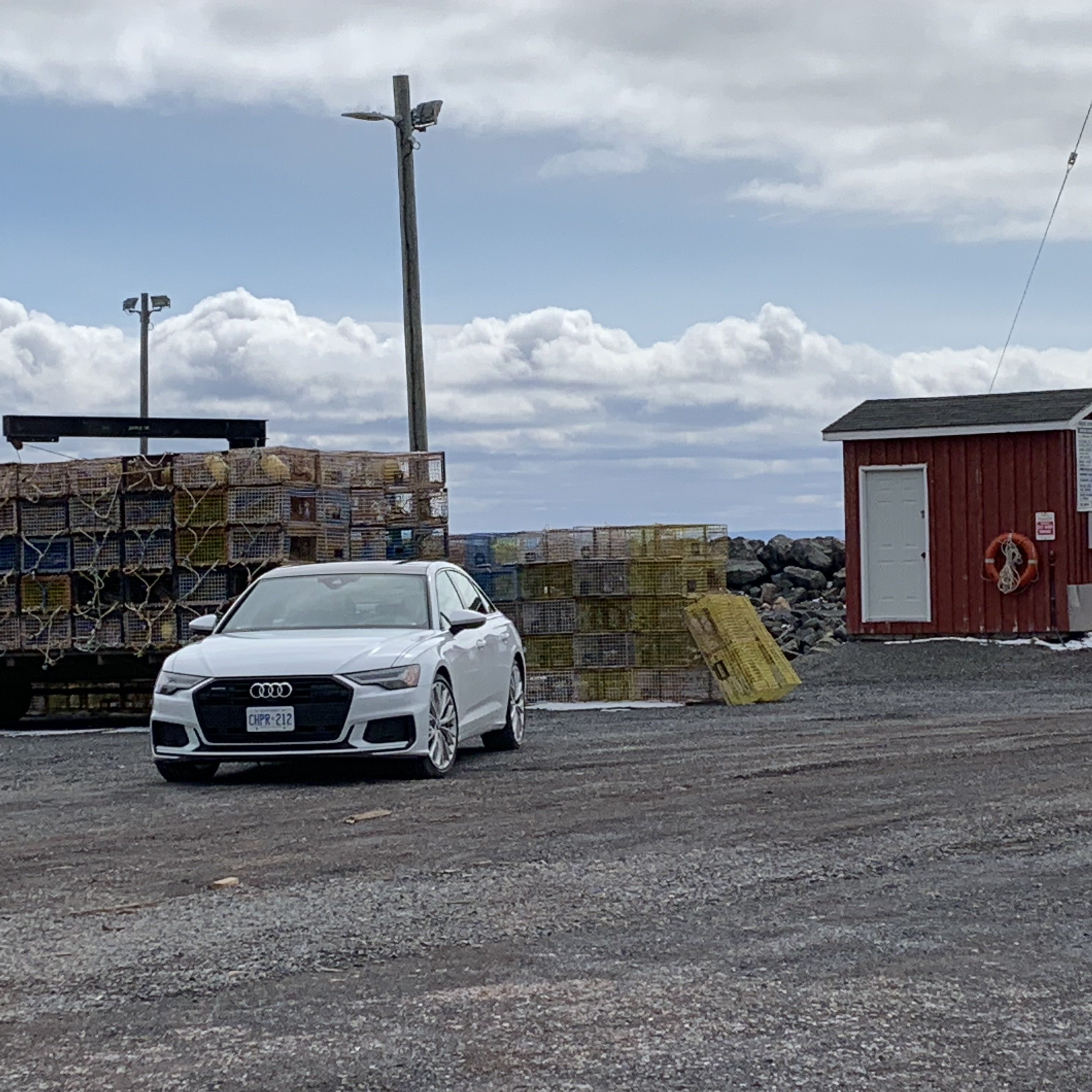 What you can’t shut off is the new two-tier infotainment system, equipped with a pair of touchscreens lifted from the big-brother A8. Its upper screen spans 10 inches and is primarily tasked with displaying stereo or navigation data depending on what the driver wants to view at any given time. Also residing here is the wireless Apple CarPlay, presented with an Audi ‘quick menu’ along its left flank. Given the general insistence of Cupertino that its interfaces be presented without pollution from other system, this move is a minor miracle. It is also very handy.

South of the main touchscreen is another, smaller unit measuring 8.6 inches responsible for ventilation controls but also housing a yaffle of shortcuts for nav destinations should the driver desire them. Switching ventilation output is visually quite easy but the lack of tactile buttons does require one to glance away from the road to ensure they’re poking at the correct part of the screen. Keep in mind, however, that Audi’s voice recognition is one of the best in the business, even able to decipher your author’s mouthful-of-marbles Newfoundland accent.

All this is in addition to the expansive (and expensive) Virtual Cockpit which sits ahead of the driver and serves as a set of gauges overlaid on a detailed navigation map. Keep the Audi-supplied dust cloth handy.

Our tester was equipped with the optional $2400 adaptive air suspension and a $1600 set of rubber measuring 255/35/21. The 21-inch wheels looks like jewels, while the air suspenders provide a measure of ride comfort in a machine with 35-series rubber. After sampling all three factory drive modes, it was easy to tell that the magic bullet is to set everything in Dynamic except for the suspension. With that left in Comfort, the A6 offered up a responsive set of manners without hammering the fillings out of anyone’s teeth. 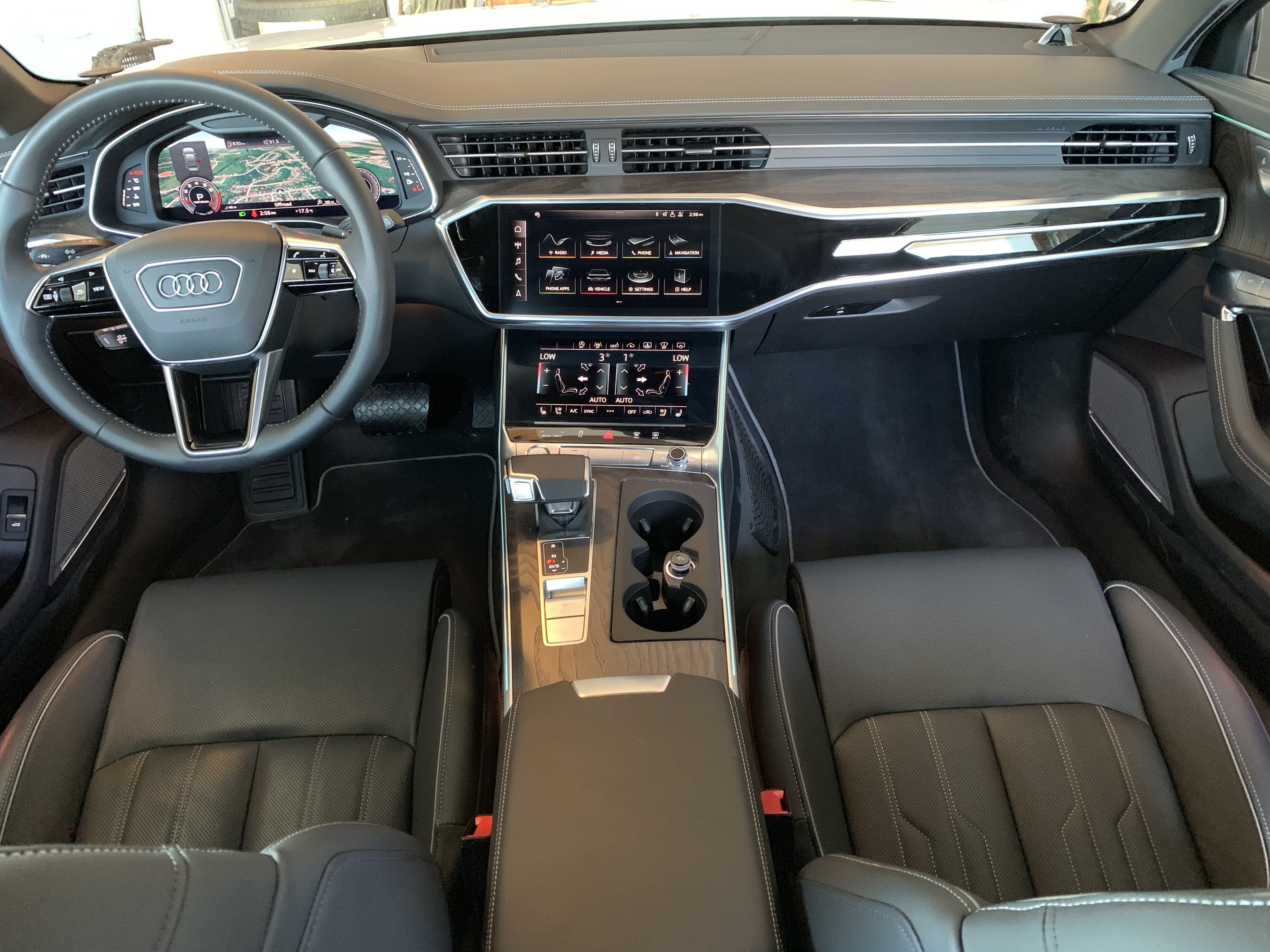 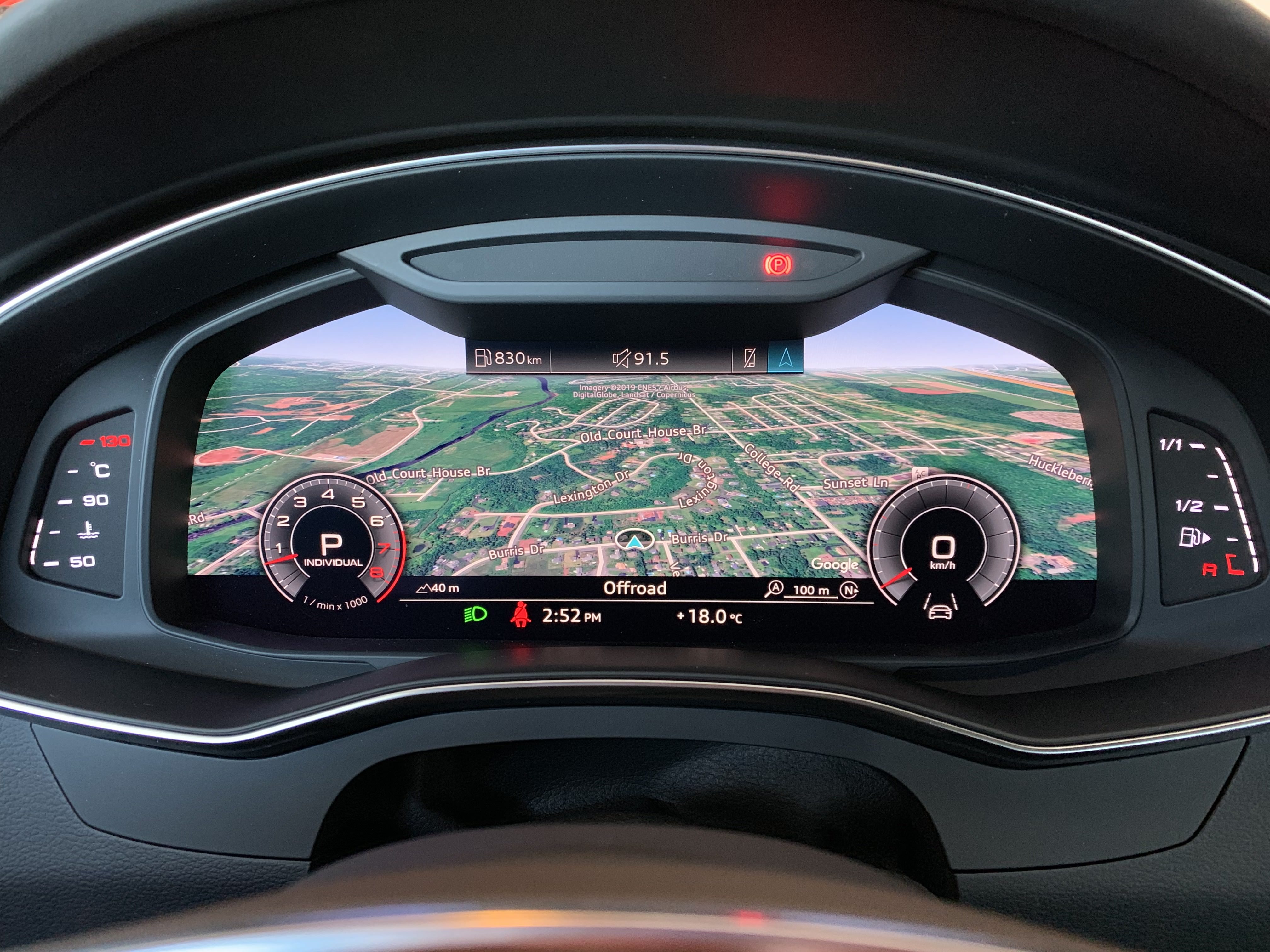 And what of those manners? They are directed by a 3.0L turbocharged V6 engine with an aluminium block and heads and produces 335 horsepower and 369lb.-ft of torque. All of the latter is online at a barely-off-idle 1370 rpm, making the A6 feel equally alert in around town manoeuvres and highway passing. Be sure to use the adaptive cruise control as the cabin silence can allow naughty velocities to build very quickly. Audi claims a 0-100km/h time of about five seconds. Quattro all-wheel drive is standard.

The seven-speed Stronic dual-clutch goes about its business like a dutiful butler, always working in the background but never intrusive. It would be preferable if Audi tuned a more aggressive exhaust note into the Dynamic settings but keep in mind that your author is an annoying extrovert who buys brightly coloured vehicles for his own fleet. It wouldn’t be everyone’s aural cup of tea, to be certain.

At speed, the A6 eats up the miles without effort. This model’s massaging front seats (with more than half a dozen settings, natch) and four-zone climate control ensure all hands will be comfortable whether it is on a trip across town or across country. Rear seat riders are the benefactors of this new car’s 12mm stretch in wheelbase. Materials are first rate with sumptuous surfaces at every touch point.

All of this brilliance comes at a cost, naturally. Our test car was loaded to the gunwales with nearly an A3’s worth of options totalling $21,200 for a final tally of just $905 less than a cool hundred grand. Big ticket items included the air suspension and 21-inch wheel mentioned above, a $5100 B&O 3D surround sound stereo which made it seem as if Eric Prydz was mixing a set at Ultra Music Fest right there on the dashboard. The audio system includes a set of speakers which rise from the dash – yet more theatre! – as if they have been roused from slumber. An array of driver assistance features and S-Line trim rounds out the $99,095 bill. 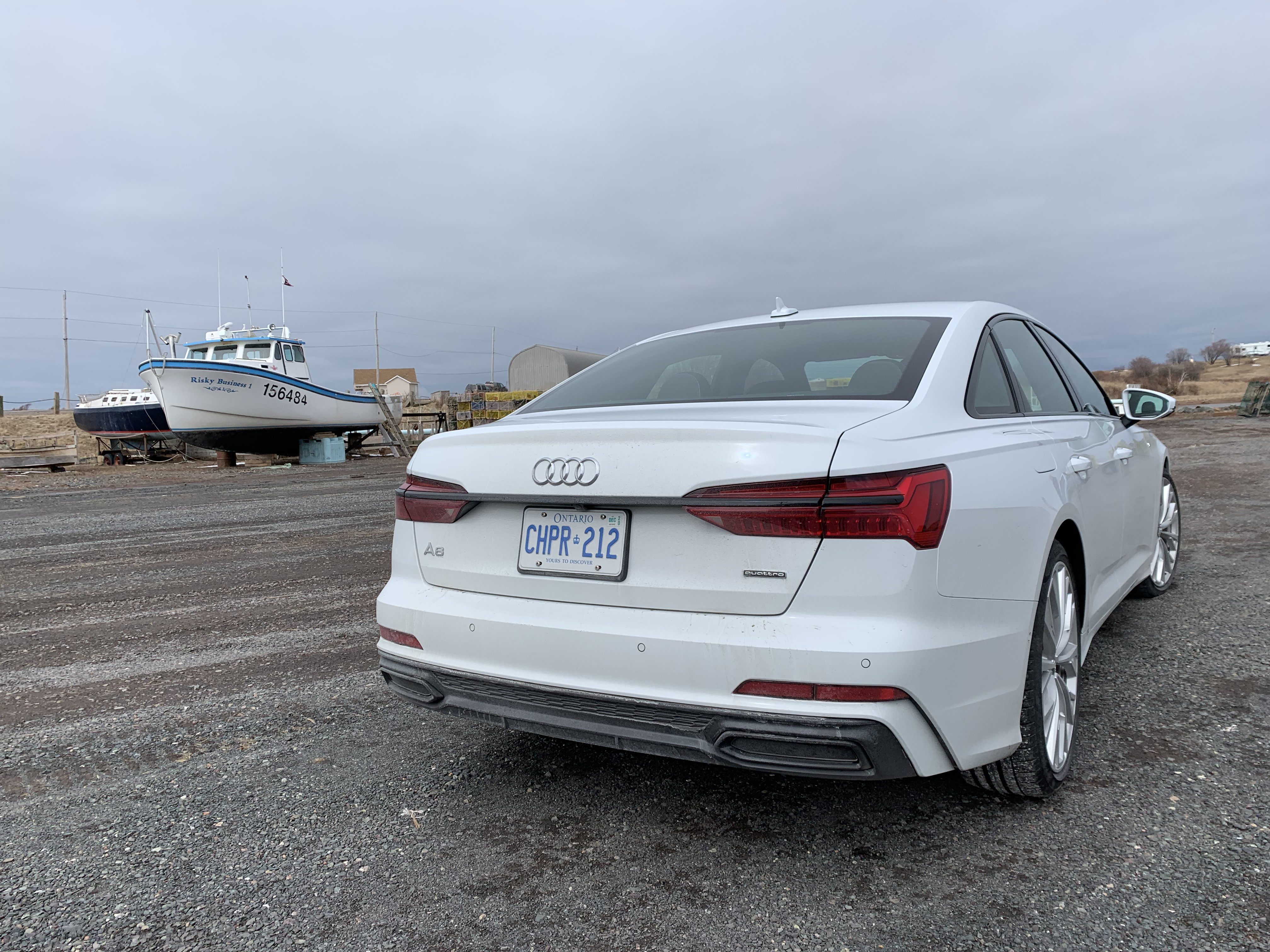 Expensive German cars are generally known for their stoicism, whether it is the muted style of an A4 or the refined rage of a 600hp RS7. With this new A6, Audi has managed to infuse a bit of theatre into the car’s DNA, creating a machine that will draw the notice but not the annoyance of your neighbours.

After all, when the valet asks “Which car is yours?” No one has ever regretted saying “Why, my dear man, it’s that big white Audi.” 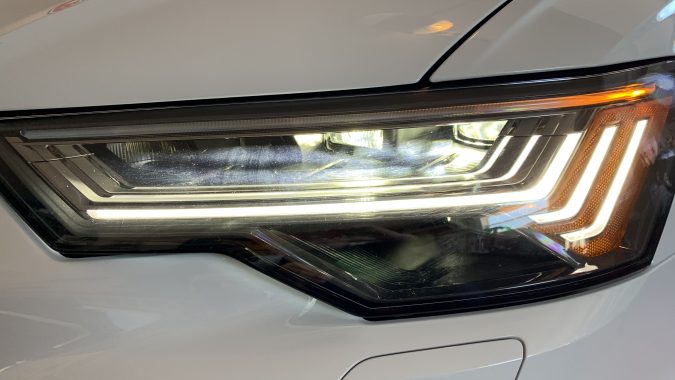 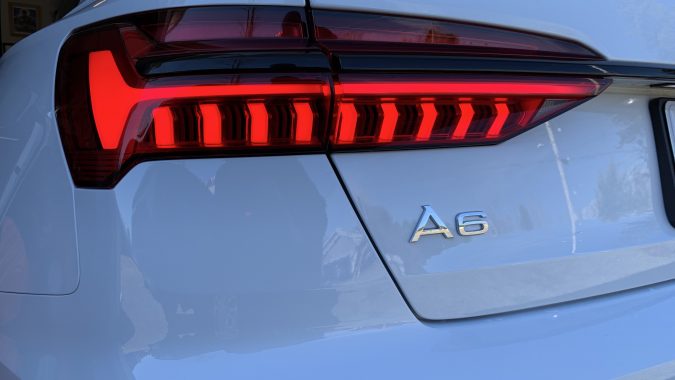 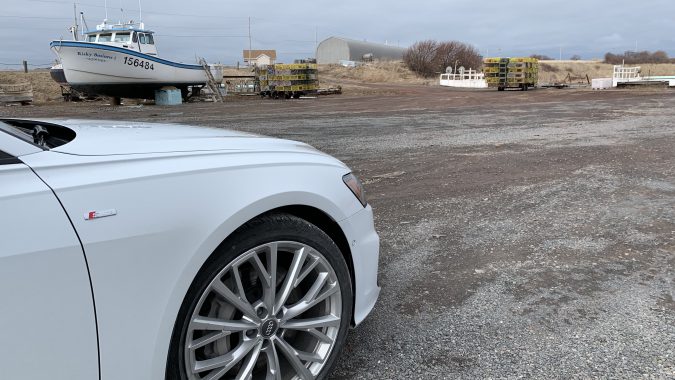 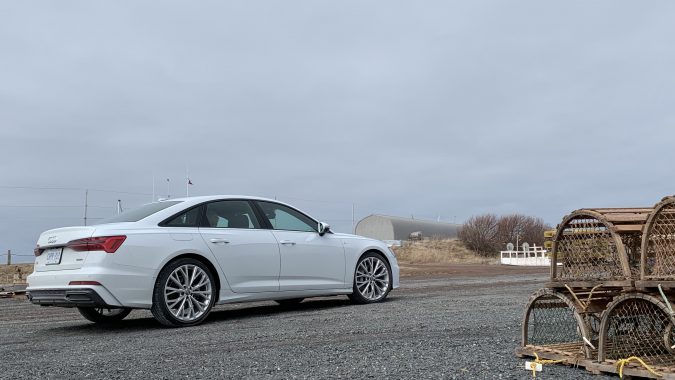 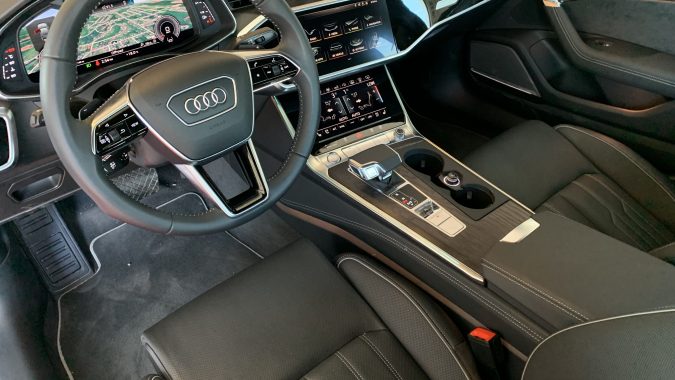 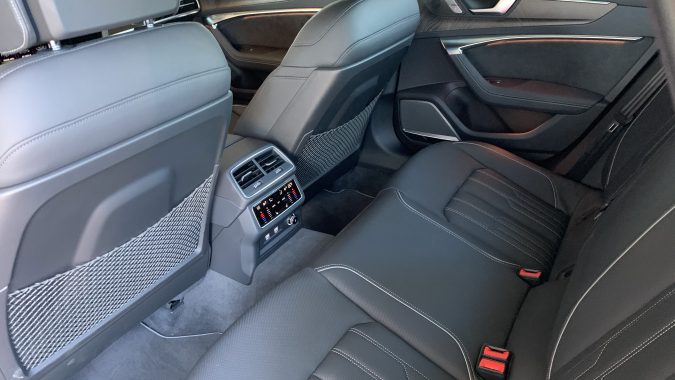 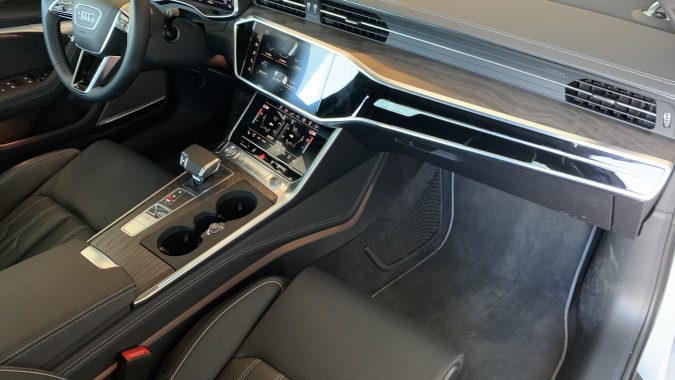 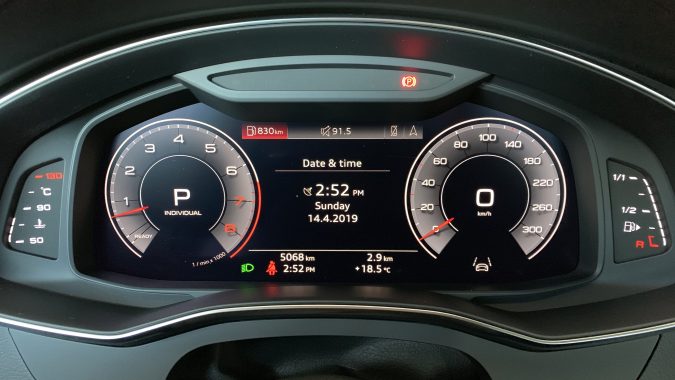 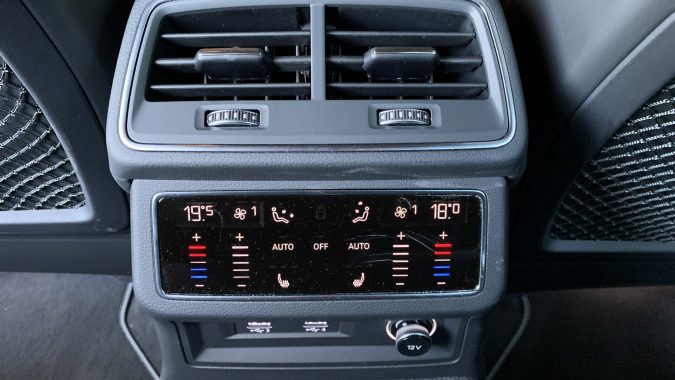 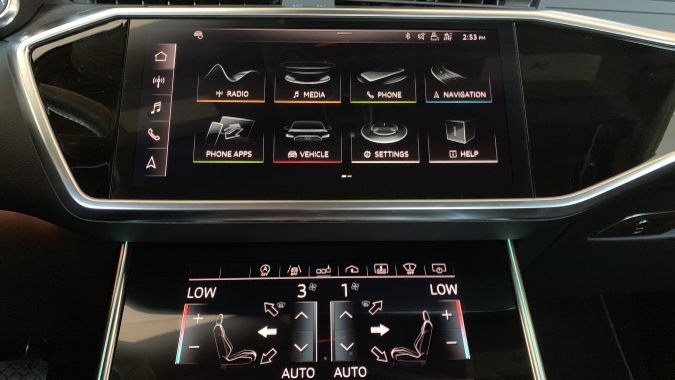 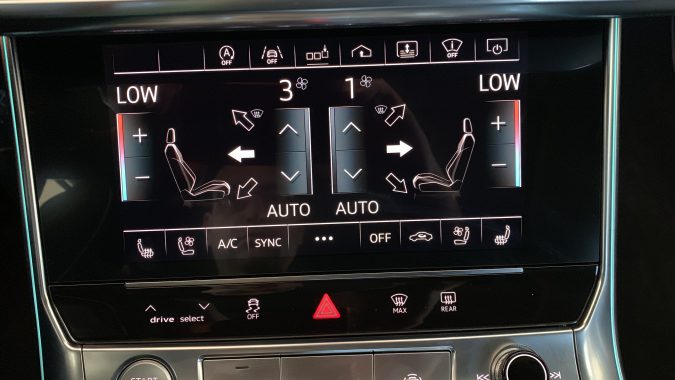 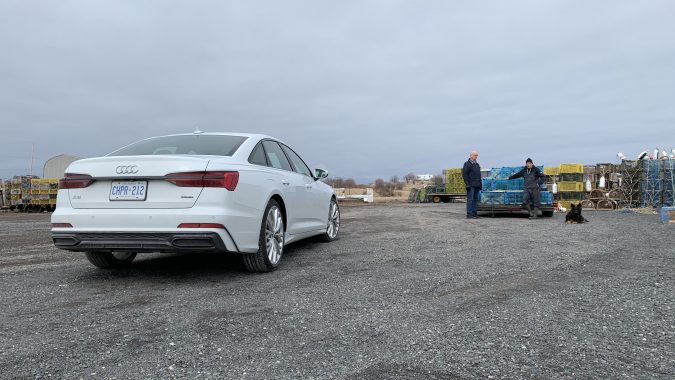