The Acura TLX A-Spec is a sports sedan that’s allergic to fun.

The 2019 Acura TLX A-Spec has a CD player. That’s really all you need to know about it.

So for just a second, let’s talk about the similarly priced Dodge Charger SRT 392.

The Dodge Charger SRT 392 starts at $44,670 — which, for the record, is about $5,000 cheaper than our as-tested Acura TLX SH-AWD Elite A-Spec. The Charger 392 has 485 horsepower. This makes the Charger quite fast. It accelerates from 0-60 mph in just 4.6 seconds. Inside, it’s well-equipped and trimmed with every modern convenience you would expect in a car. Its aggressive exterior styling fills its driver with a sense of pride and even ‘cool’. But most importantly, the Charger SRT 392 is very, very fun. It’s “if you looked ‘fun’ up in a dictionary, there would be a picture of the Charger” fun.

It’s one of five other great sports sedans you can score for under $50,000.

It’s a part of the dictionary which the Acura TLX needs to read. Especially if it expects to price itself directly against the Dodge Charger. 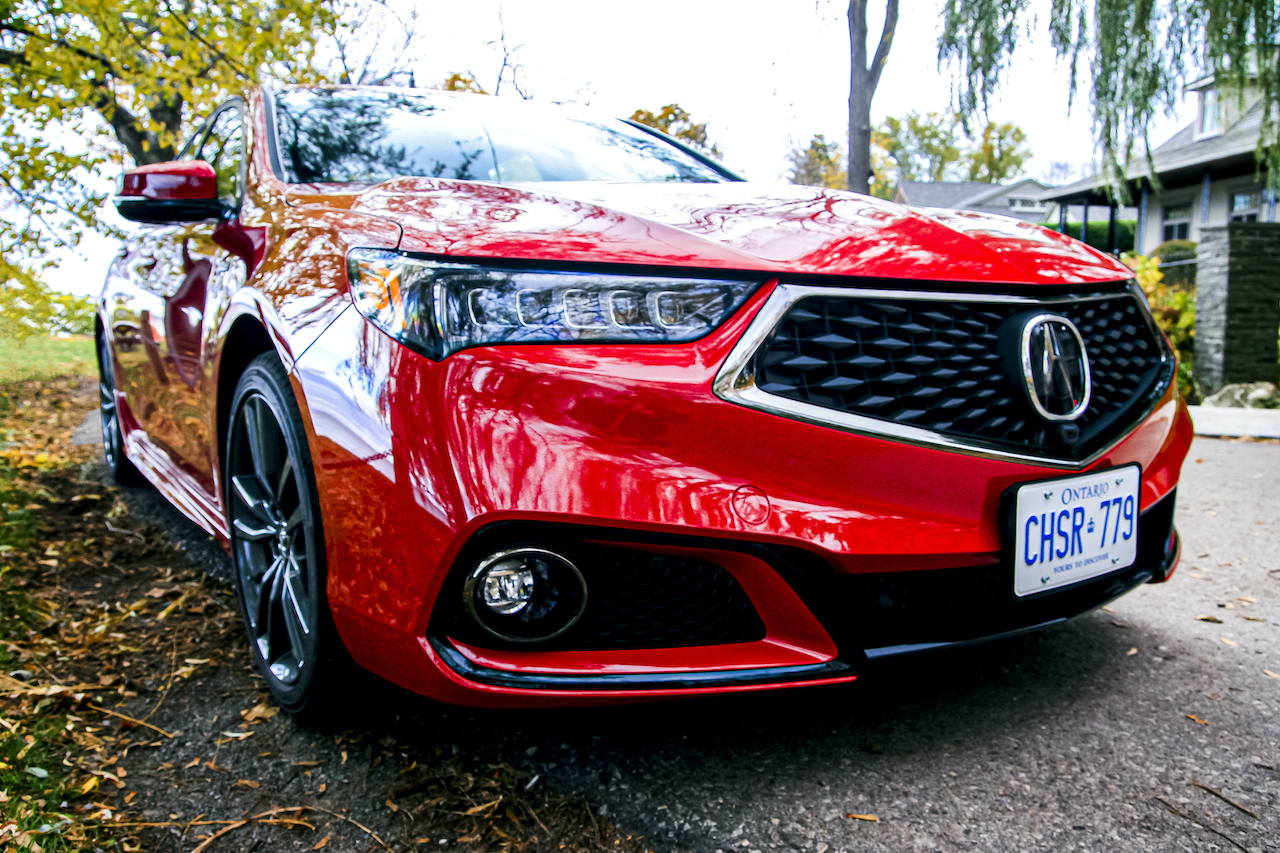 The top of the line Acura TLX SH-AWD Elite A-Spec is a mouthful to say. It also does little to make a case for itself over its competition.

Starting at $49,290, the TLX SH-AWD Elite A-Spec makes a table stakes 290 horsepower Coupled with its AWD system, its grunty V6 engine is able to propel the car to 60 mph in around 6 seconds, although it certainly doesn’t feel that way. And while it contains every modern comfort one would expect in a top-of-the-line modern sports sedan, all its driver aids accumulate to be overbearing and determined to take you out of the driving experience.

The Acura TLX A-Spec has all the charm and personality of a high-school gym teacher. And not the one who, when they caught you smoking weed behind the bleachers, would take a drag of your joint before stomping it out and telling you to get back to class. The TLX A-Spec is the kind of gym teacher who makes you take an abstinence pledge.

It’s an attitude certainly expressed through its exterior styling; determined to be nothing other than dignified, inoffensive, understated… bland and forgettable. 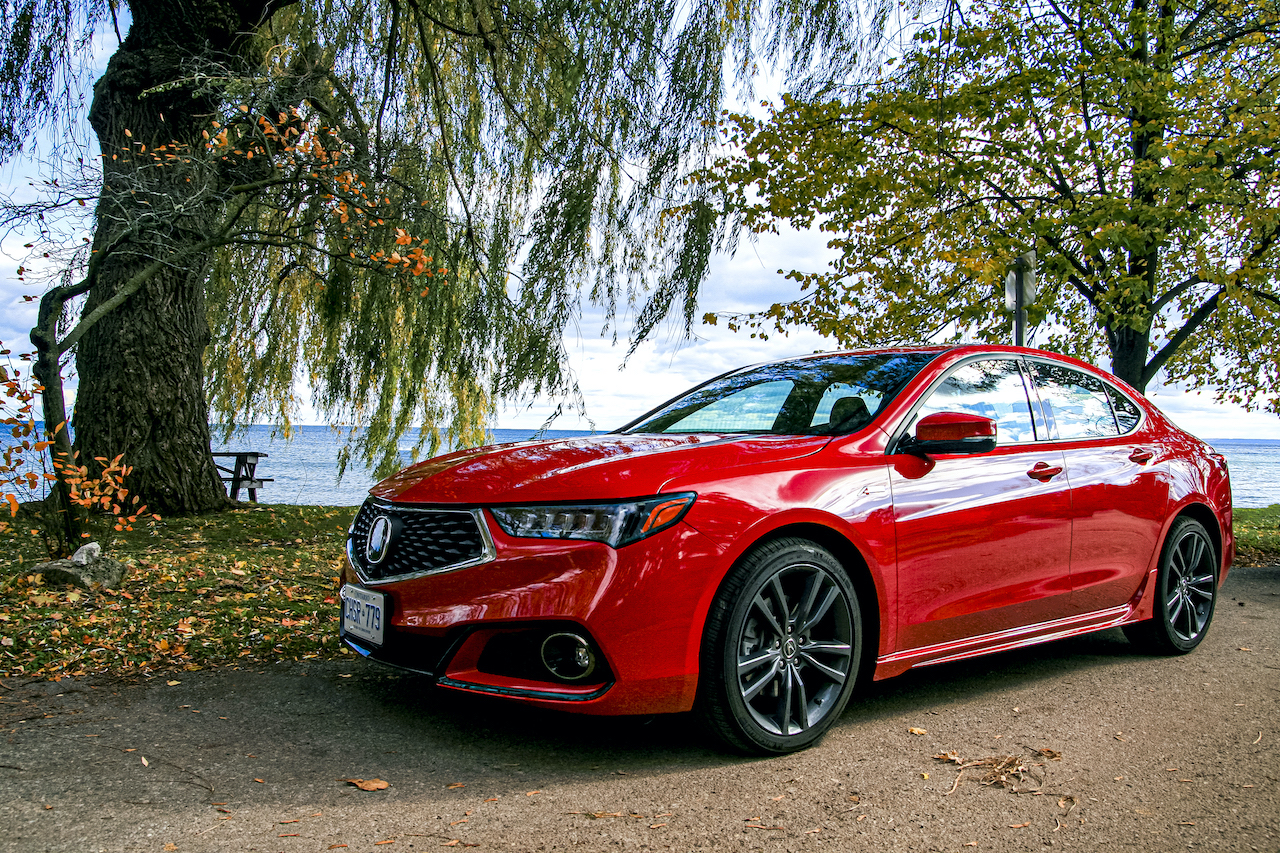 If you’re looking for a reason why young people aren’t buying cars and are actively encouraging the arrival of autonomous vehicles, look no further than the Acura TLX A-spec.

Do you have anything nice to say?

The fit and finish on the Acura TLX A-Spec, particularly the interior, is nothing short of excellent. From its ebony Alcantara seats and leather-wrapped steering wheel, to its brushed aluminum accents, the TLX A-Spec is one of the nicest new cars under $50,000 to sit in. Every piece which you touch and interact with is reasonably ergonomic and feels of quality. And I have to admit, it’s a level of quality the Charger doesn’t quite hit.

It does have a navigation and driver interface system that’s slightly confusing and less intuitive than its Honda cousins (why they didn’t just use the same one as Honda is beyond me). However, once you get the hang of navigating between the A-Spec’s two screens using the wheel located on the centre console, it’s all easy enough and functions well.

About those dual screens; while it may seem like information overload at first, I did eventually begin to enjoy having both my active map and entertainment interface available simultaneously. 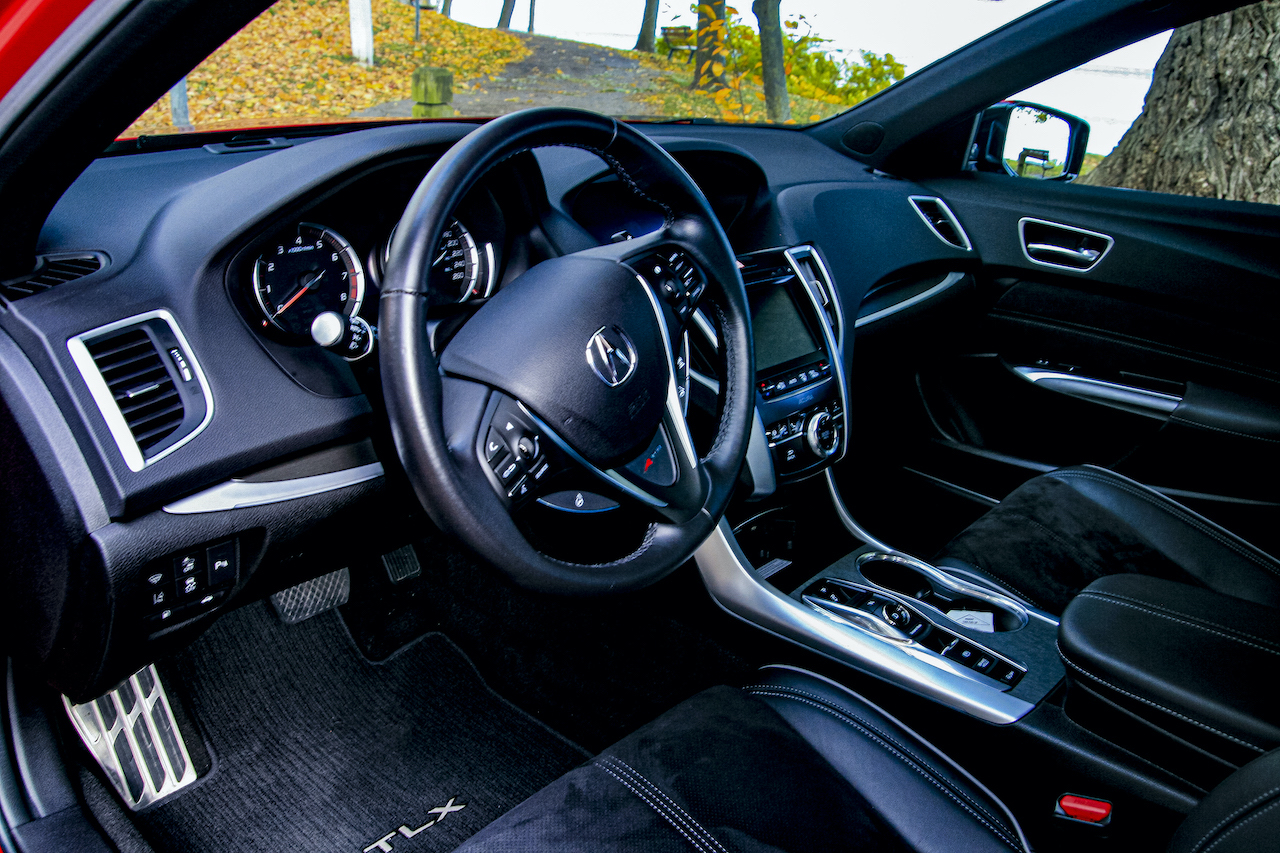 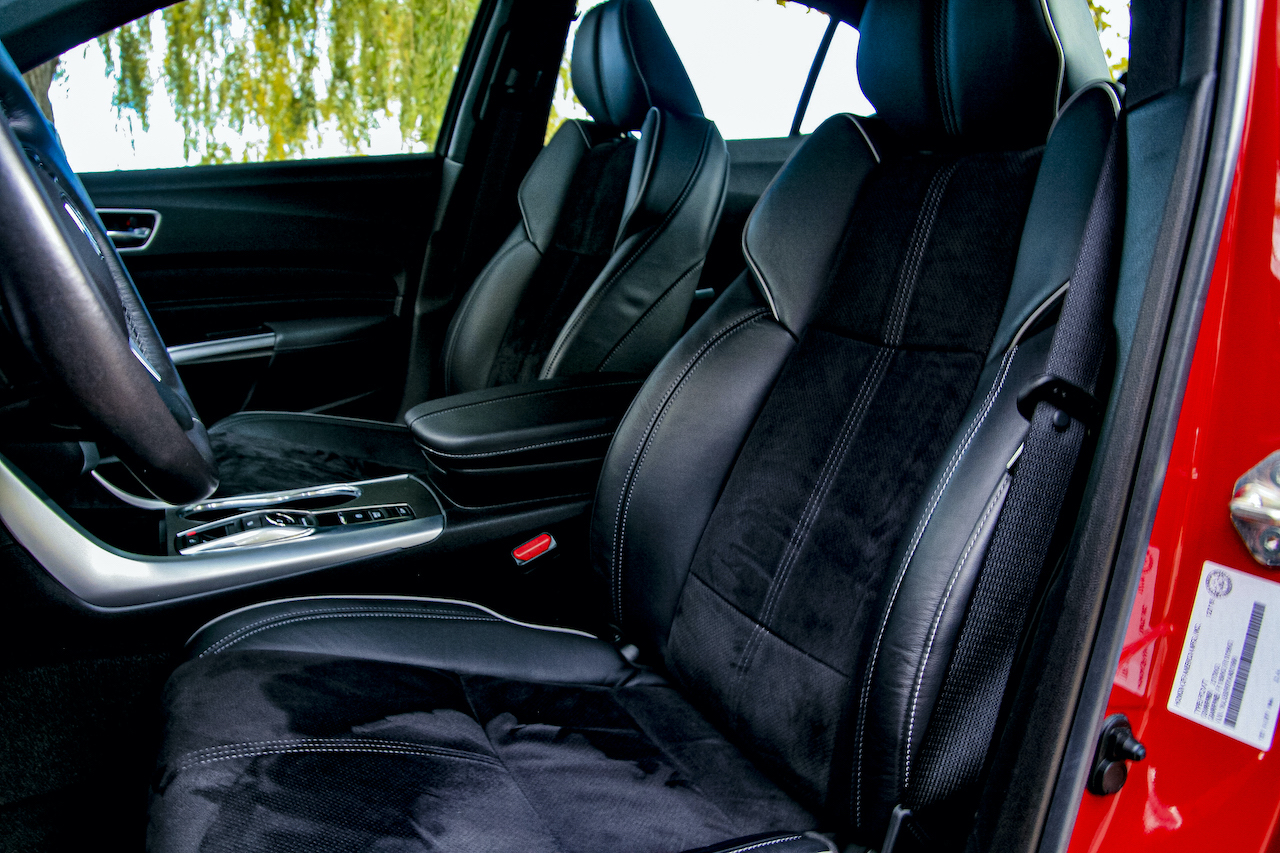 I assume this is in no small thanks to the A-Spec’s Amplitude Reactive Dampers, MacPherson strut front suspension, multi-link rear suspension and front and rear stabilizer bars.

The A-Spec is Cadillac smooth. And I mean that as an absolute complement. The “SH” portion of this car’s endless name stands for “Super Handling” and it shows.

Finally, it also has a really, really great engine note. While the A-Spec’s 3.5 litre V6 ultimately feels lethargic and gutless, it does make quite a satisfying and throaty noise.

I swear it has the same note as a Ford ‘Coyote’ 5.0 litre. Not the same level of volume or depth of bass, but that same throaty, burbly, high-revving growl when you put your foot in it. It’s actually a pretty weird experience, albeit a welcome one.

Do you know that moment when you’re on the couch at night watching Netflix and you start to feel yourself drift off to sleep? It’s like that. 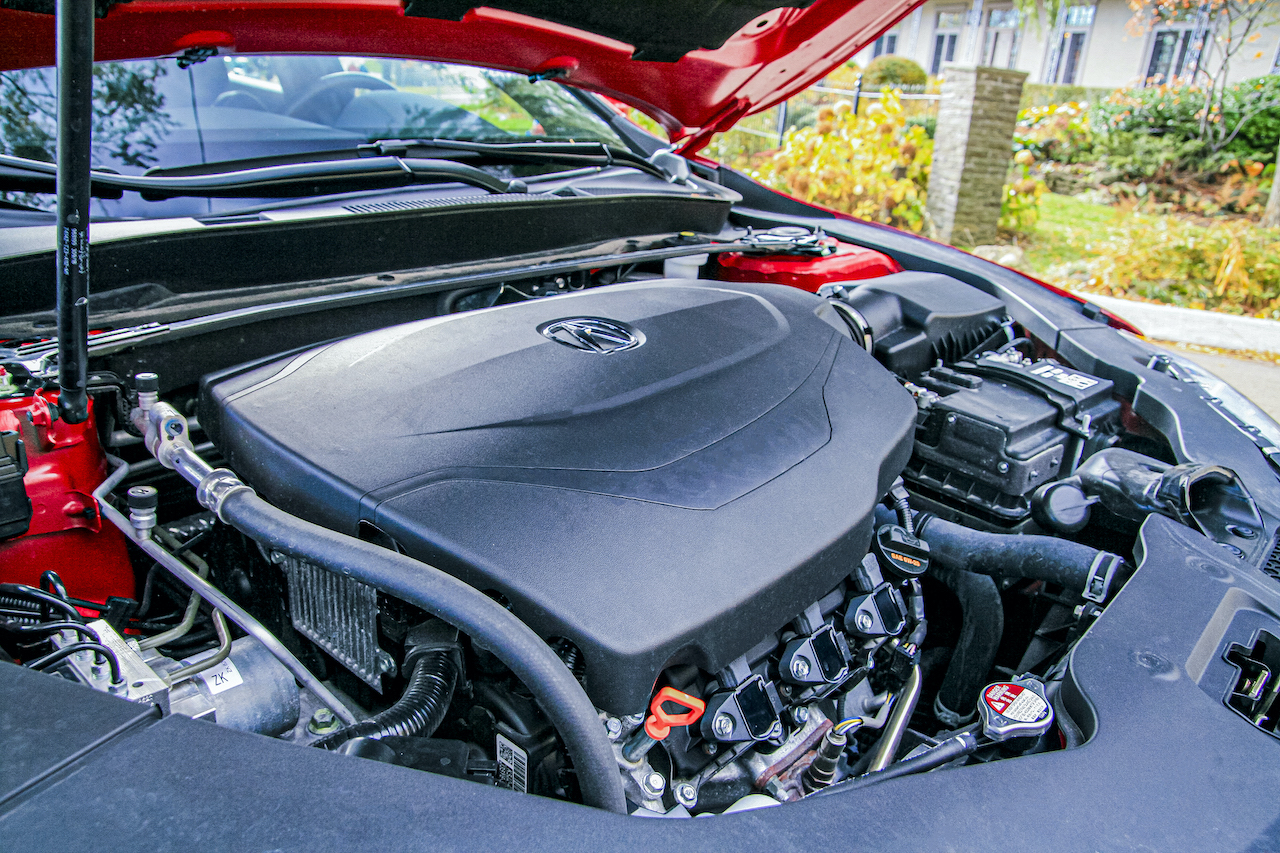 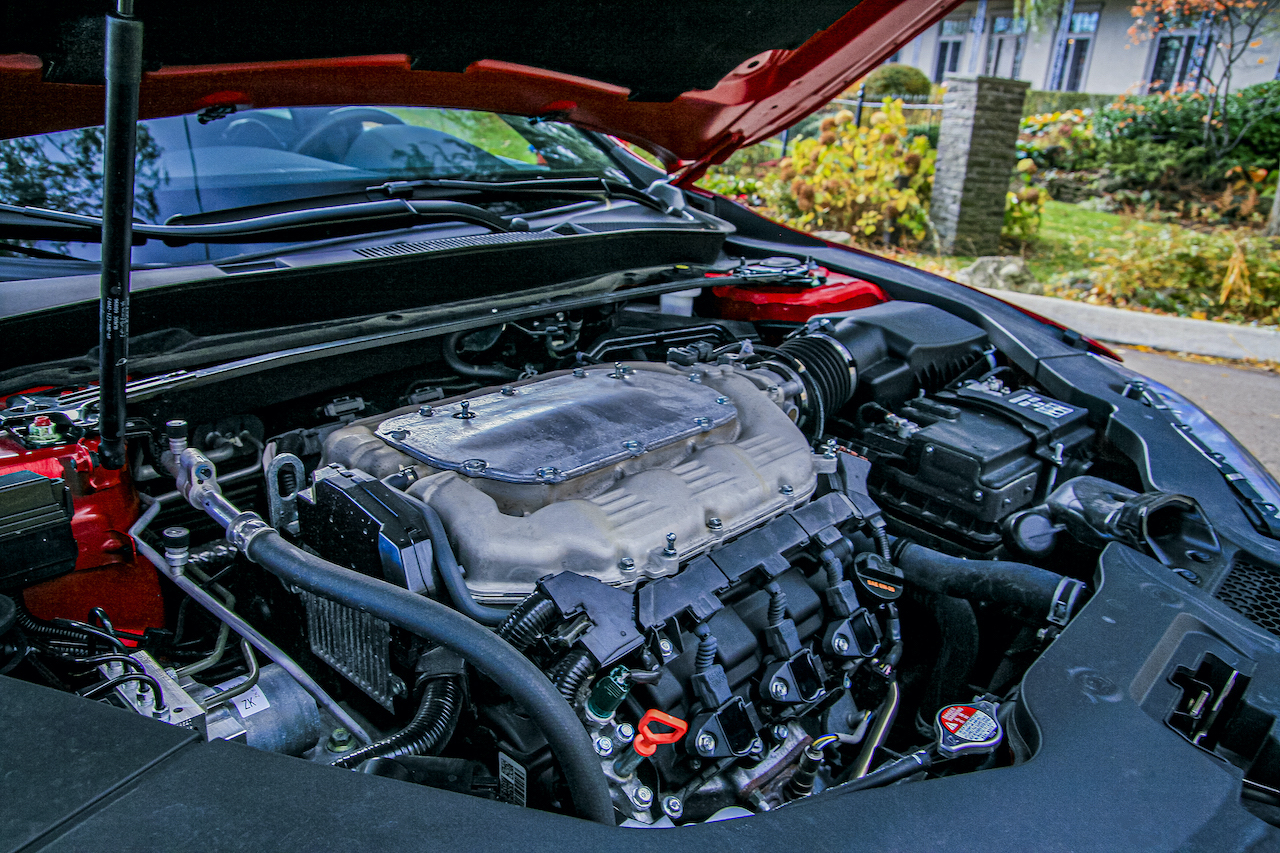 If the TLX were a drink it would be valium in flat water.

The biggest problem is the power. 290 horsepower simply isn’t enough to put any kind of real excitement into this car, particularly with its manic 9-speed automatic transmission, heavy all-wheel-drive and army of electronic nannies keeping everything perfectly safe (read, “boring”) at all times.

Even in ‘Sport +’ mode, putting your foot into the TLX feels more like a suggestion than a driver input. And that’s just not acceptable for a vehicle in today’s market which comes with a $50,000 price tag and a badge like ‘A-Spec.’

Beyond its lack of motivation to accelerate, the TLX also inundates its driver with constant corrections and safety warnings. A large ‘BRAKE’ light flashes in your gauge cluster the split-second a vehicle brakes in front of you on the highway. If the car believes you’re drifting into a lane, its Lane Keeping Assist will take the steering out of your hands and work to correct your line. There is a way to shut this off through the main menu in the car’s entertainment console, but you have to know what you’re looking for. It’s all very annoying.

I had to work very, very hard to have even a little fun in this car. Here’s my recipe.
Flip the car it into ‘Sport +’ and manual shift mode. Then, play Metallica’s Master of Puppets at full volume. Proceed to drive as if your right foot is 100% heavier than it actually is. Smiles may, finally, ensue.

The TLX A-Spec does everything in its minimal power to reduce and numb the experience of driving. And this attitude of a car driving you rather than you driving it contributes to something far more depressing than just one boring car.

We’ve all heard the narrative that Millennials and Gen Z take ride shares everywhere and aren’t much interested in buying cars. Certainly, this seems like a narrative that Acura has subscribed to. 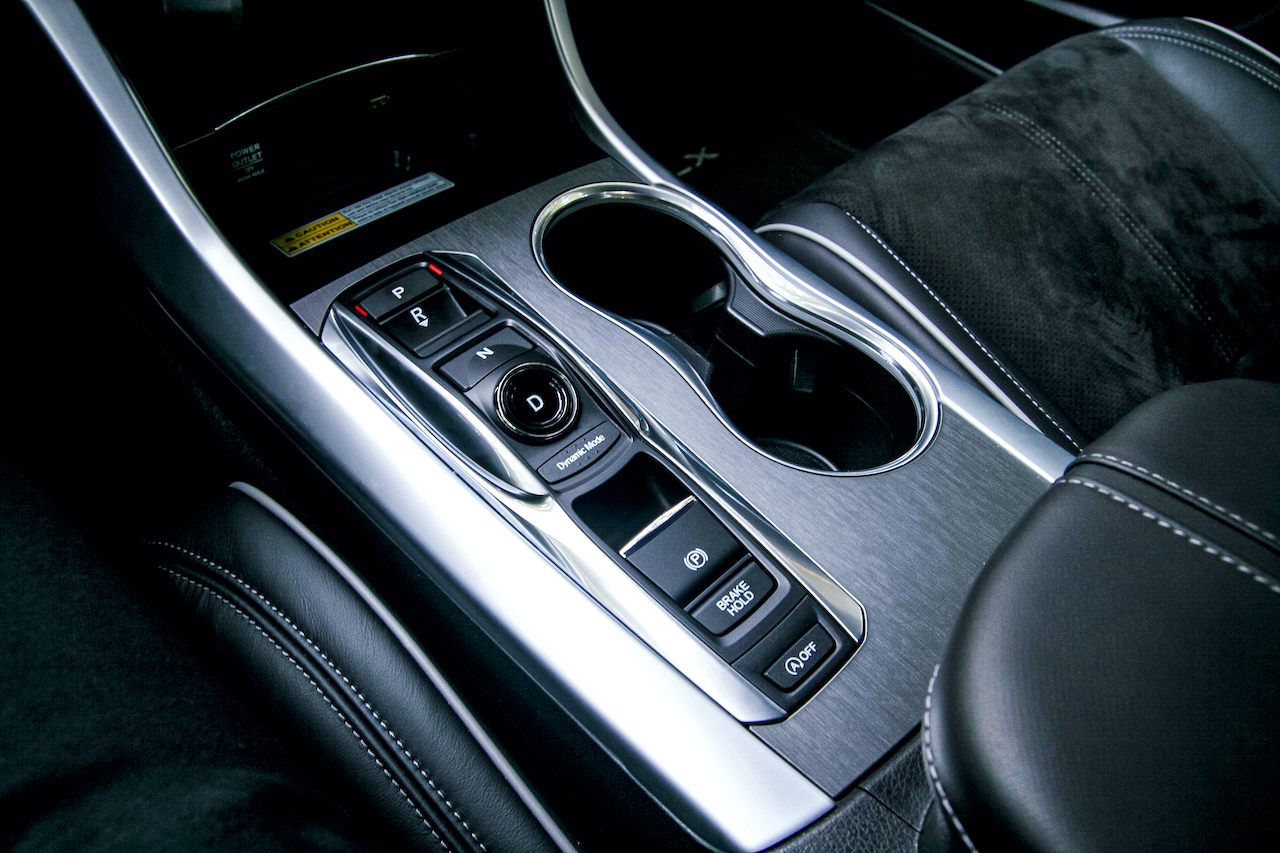 Which brings me back to that CD player.

If you’re 20-years-old or younger, odds are good you’ve never owned a CD. Because you don’t remember a world before iTunes. Or WiFi.

But even if you do remember the good ol’ days of being price gouged for a hunk of plastic just to get the three songs you actually liked… when’s the last time you’ve actually used a CD player?

Acura assumes that whole chunk of TLX buyers will want a CD player because figuring out that whole “Bluetooth” thing is just too complicated.

Between the lethargic performance, hum-drum exterior styling, cascade of electronic nannies and shoulder shrug on the part of building enthusiasm amongst younger buyers, it’s no wonder young people would rather take a ride share.

After all, I’ve definitely had more exciting Uber rides than I’ve had drives in the TLX A-Spec.

The answer was right in front of Acura the entire time. The Type R is a car which manages to be civilized, comfortable and easy-to-drive most of the time.

But it also looks incredibly exciting. And when you start to beat on it, flip it in “R” mode and roll through the gears, it comes to life. The Type R fills its driver with feelings.

Remember feelings, Acura? They were things like “fun” and “excitement”. 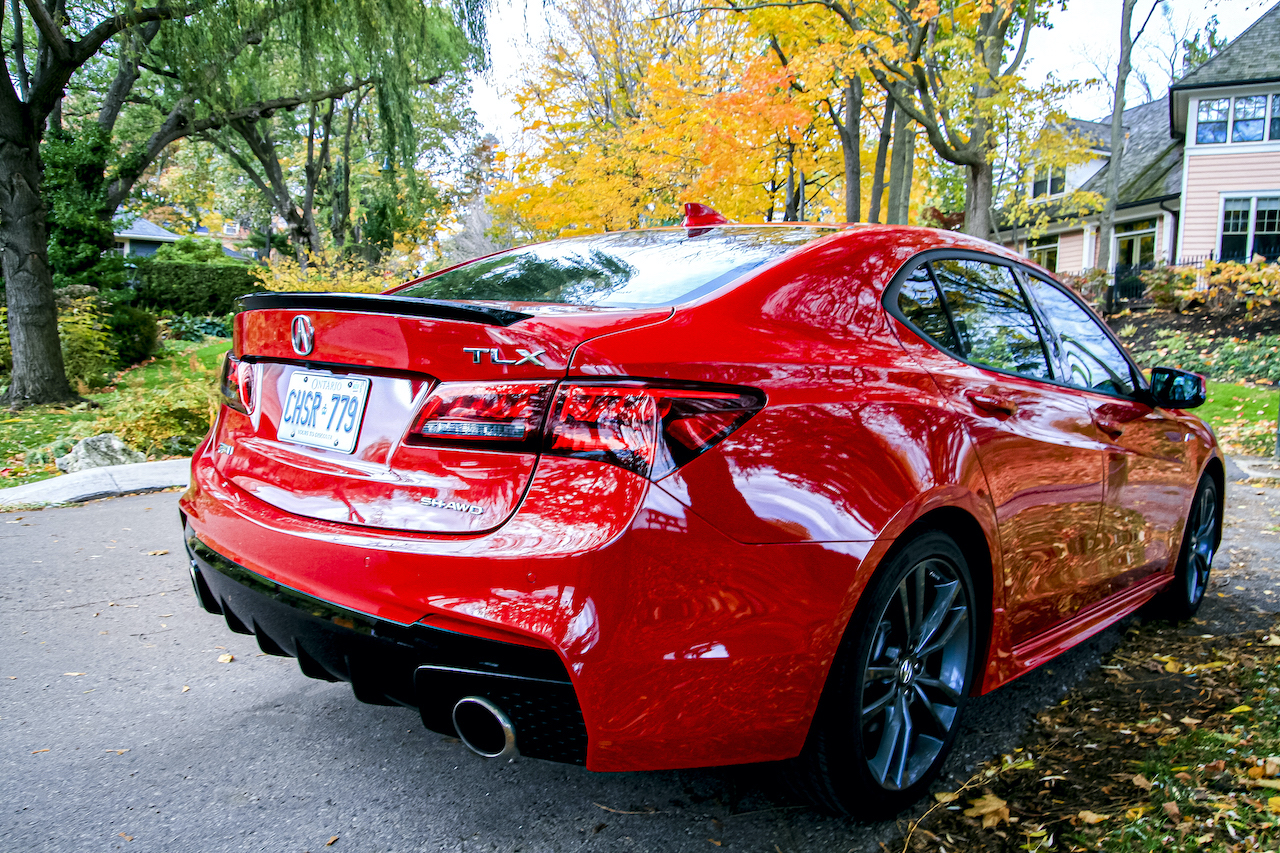 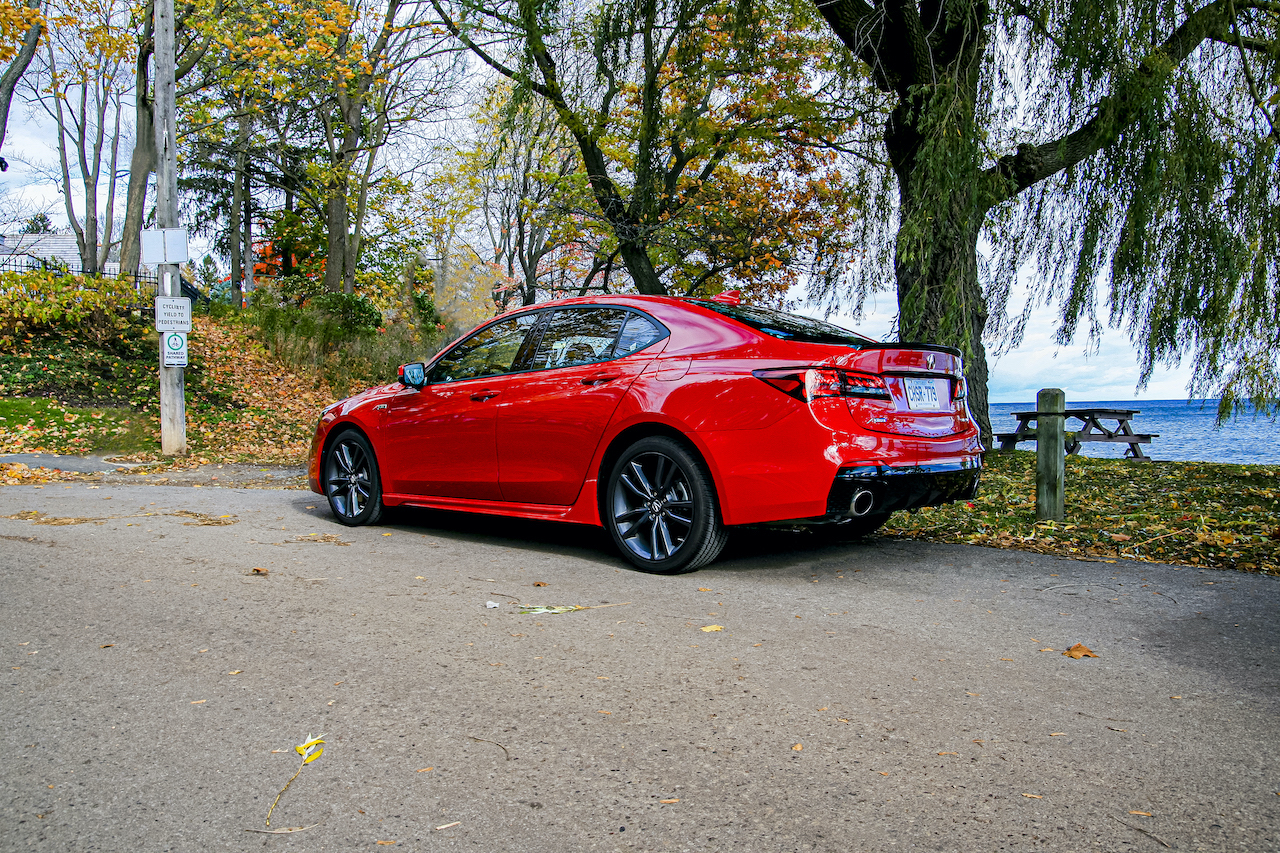 It needed a turbo with a little blow-off noise. It needed vented wheel arches and hood scoops. It needed more than 300 horsepower. And it needed to get to 60 mph a full second quicker than it does.

And yes, most TLX buyers probably don’t want any of those things. Just as most Honda Civic buyers don’t. But if we’re talking about the top-of-the-line flagship model that’s priced to compete with the likes of a Dodge Charger 392 SRT, it simply needs more of a ‘just for the hell of it’ fun factor.

I actually drove the A-Spec right after the Type R, and I was astounded by the contrast. How could these vehicles not share the same DNA and engineering philosophy?

Probably the biggest tell on how I felt about the A-Spec was just how much I immediately missed the Type R.

For the 10 days I was with the Civic Type R, I looked for every excuse to drive it. I looked forward to it. Even though it wasn’t my car, I constantly checked it for rock-chips or other ailments. I asked Honda if I could keep it for just one more day to get another big drive out of it, but unfortunately, Honda needed it back on time.

By contrast, I had to make a point to go take the A-Spec for a drive. I never thought about it when I wasn’t driving it. And I returned a day early because it was convenient.

One vehicle brought me sincere joy. The other was just some car.

And if Acura wants to attract buyers who have never owned a Discman to the brand, they’re going to have to start focusing on the former rather than the latter. 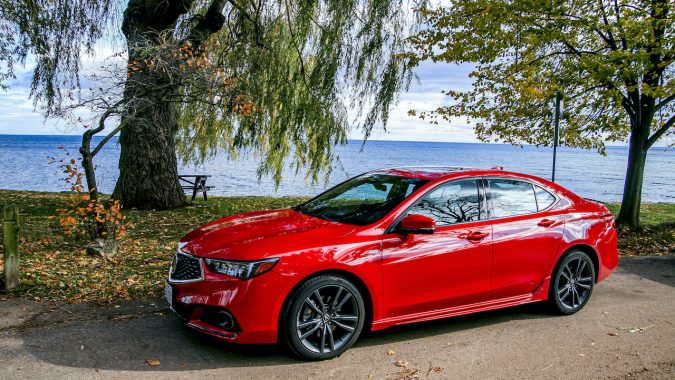 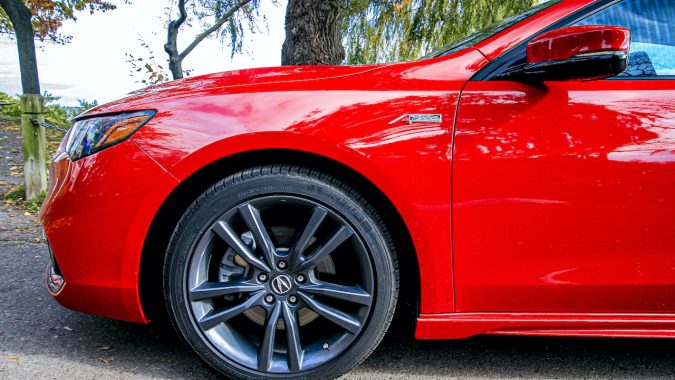 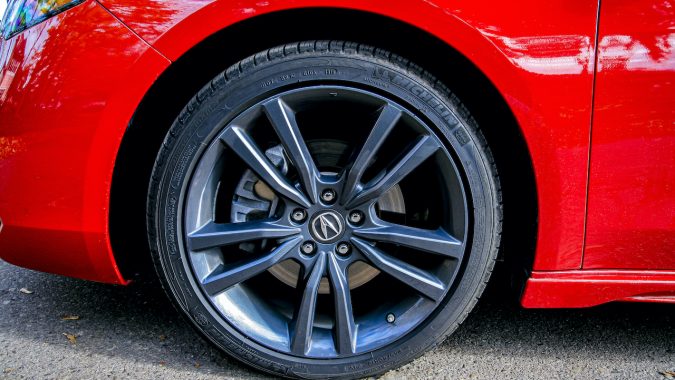 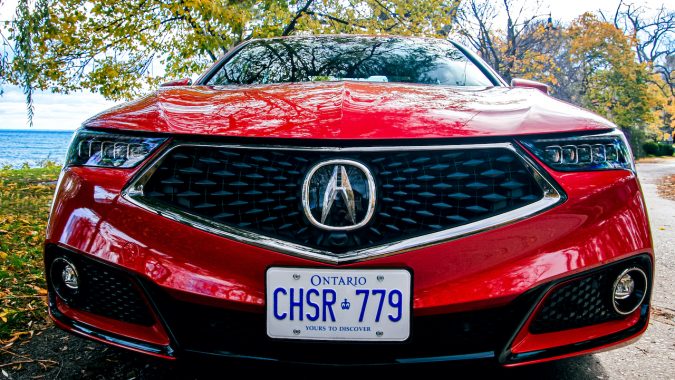 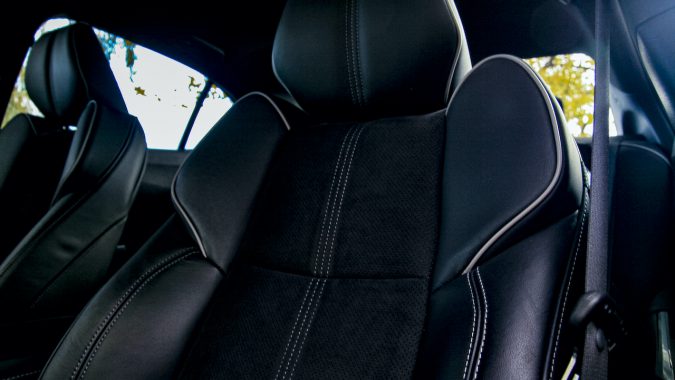 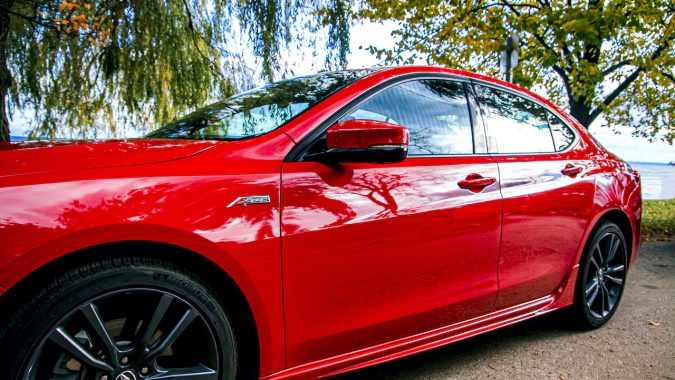 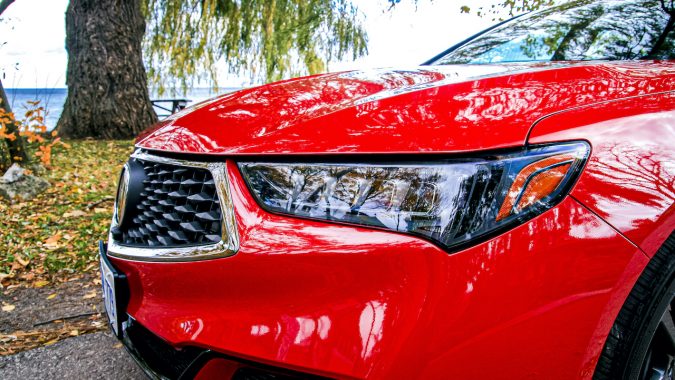 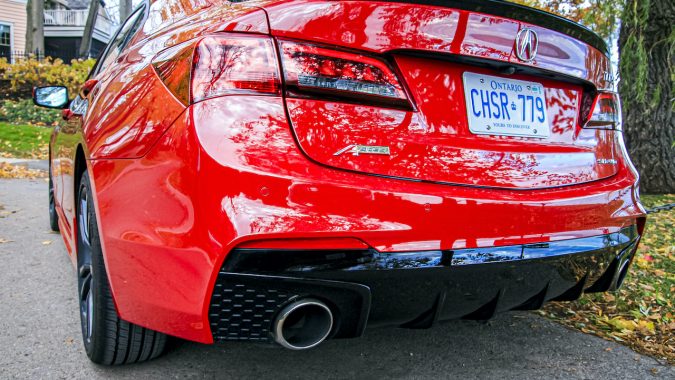 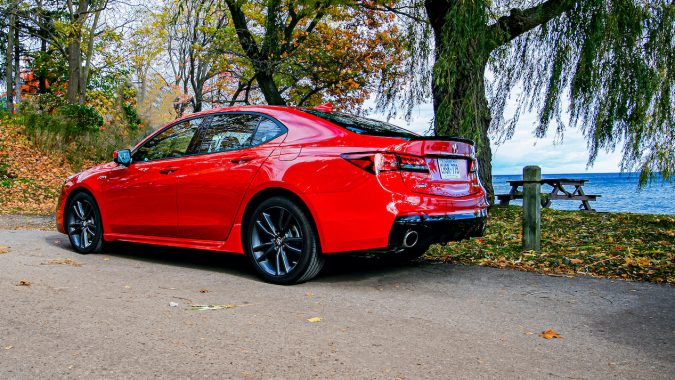 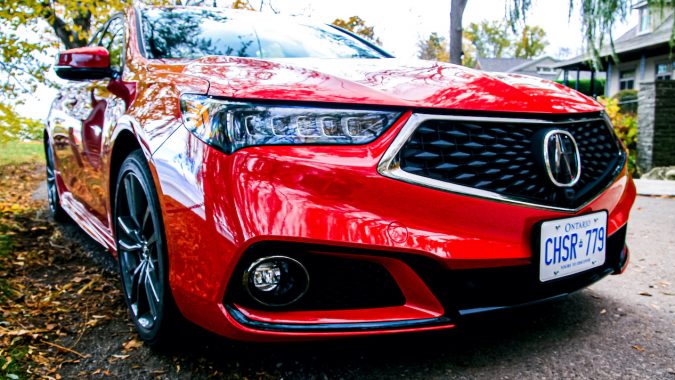 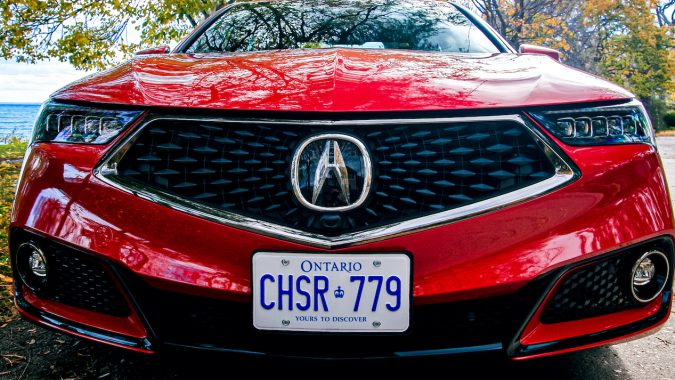