Not long ago, Akio Toyoda decreed the Big T would operate under the “no more boring cars” ethos. The man had a point. For ages, Toyota traded on the premise that they were in the business of selling solidly-built machines with great resale values. If one looked up ‘reliable but lukewarm’ on Wikipedia, they would find a picture of the old Camry.

In fact, that car was not unlike that episode of Star Trek: The Next Generation in which Picard found himself in an alternate timeline, one where he was a wallflower lieutenant instead of a decisive captain. Dependable and capable, but lacking ambition.

One can no longer level that criticism at the Toyota Camry. Freshly imbued with a bold style, the 2018 model sheds its somnambulant styling decisions for a bolder face while retaining the traditional Toyota traits of long-legged steadiness.

The Camry shown here is one of ten (!) trims available for 2018, three of which are hybrids. This test car is the top-rung Hybrid XLE trim, equipped with all manner of features such as natty leather seats and a glass moonroof. Priced at an ambitious $42,935 including freight, it represents a nearly $10,000 walk from the Hybrid LE, a car equipped with an identical drivetrain and safety features. Shop wisely, folks.

Propelled by a 2.5L inline-four, the gasoline-powered engine is paired with an electric motor and lashed to a continuously variable transmission. The works of it makes just over 200 horsepower, all of which is sent to the front wheels. This powertrain goes about its business without complaint, working in the background like an invisible but attentive butler.

In this age of 707 horsepower sedans, the twin-century number might not sound like a lot. Even the Camry Hybrid’s V6-powered brother makes a hundred more horses. However, thanks to a trio of driver selectable modes – and the immediate power delivery properties of an electric motor – this car feels a great deal more sprightly than one would ever expect, particularly when one mashes the Sport button located just aft of the transmission shifter. 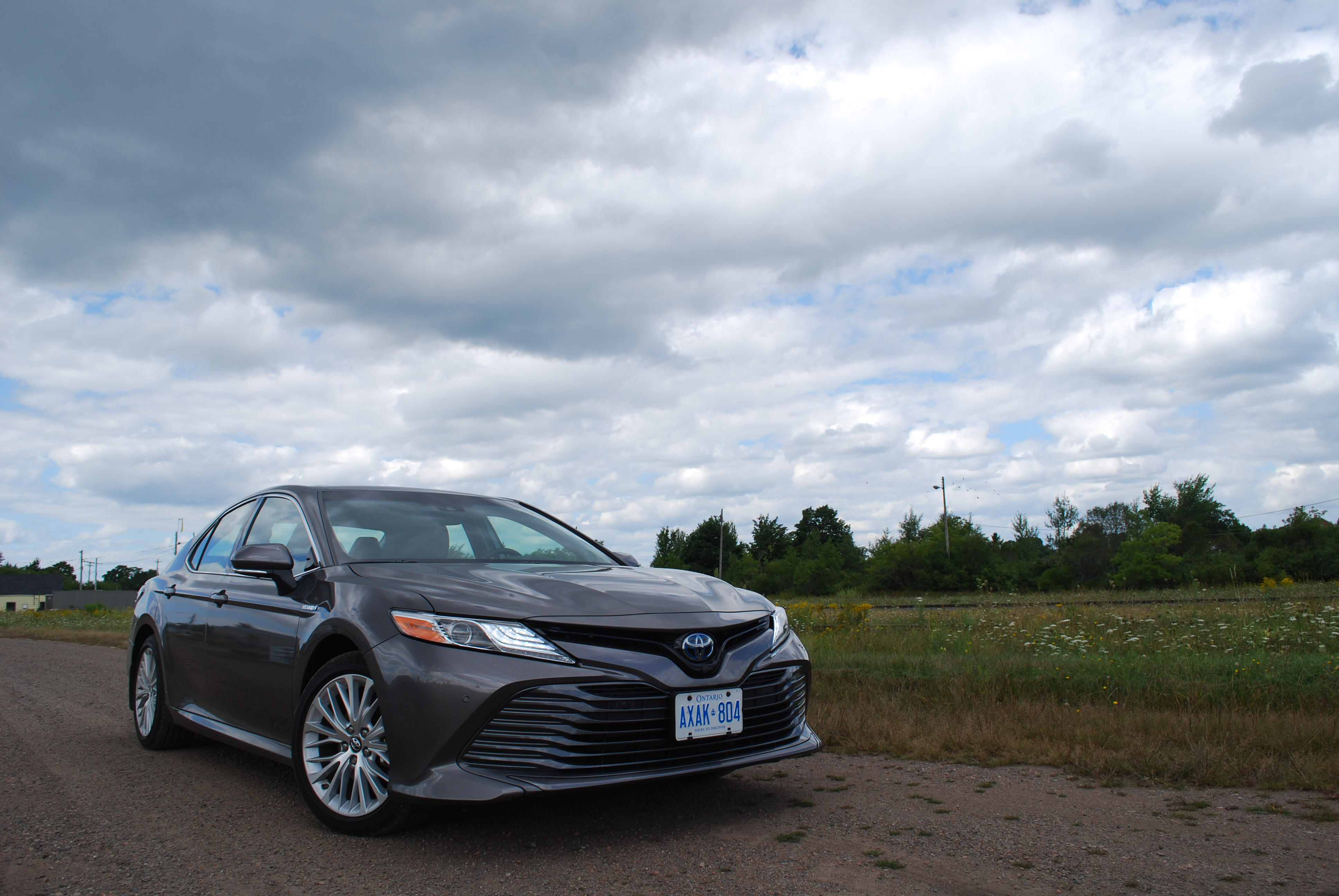 One can also select a pure EV mode, keeping the car from lighting its gasoline-fuelled fires under certain conditions, like when creeping through a parking lot looking for that elusive empty space.

Your author did find this Camry Hybrid to loudly announce the presence of road imperfections, of which there are many in his hometown. Impact harshness was surprisingly high and it would be interesting to test the car again if it were equipped with different tires. The rock-hard rubber selected by Toyota was seemingly chosen for its low rolling resistance, a feature that does little for passenger comfort but contributes to stellar fuel economy.

Rated by NRCan at 5.3L/100km in the city and 5.0L/100km in highway driving conditions, the 2018 Camry Hybrid XSE returned a solid 5.5L/100km in this author’s hands. Judicious application of the throttle, combined with the car’s 49.3L fuel capacity, could stretch this car’s cruising range to nearly 1000km.

Effortless and efficient passenger comfort has long been a Camry calling card, and so it remains. All versions of the 2018 Camry Hybrid are equipped with Toyota’s Safety Sense suite of driving aids, providing lane departure alerts and a pre-collision system in addition to the expected raft of airbags. The XLE does add an around-view camera system and automatic braking if the car senses impending doom while an oblivious driver is backing up. 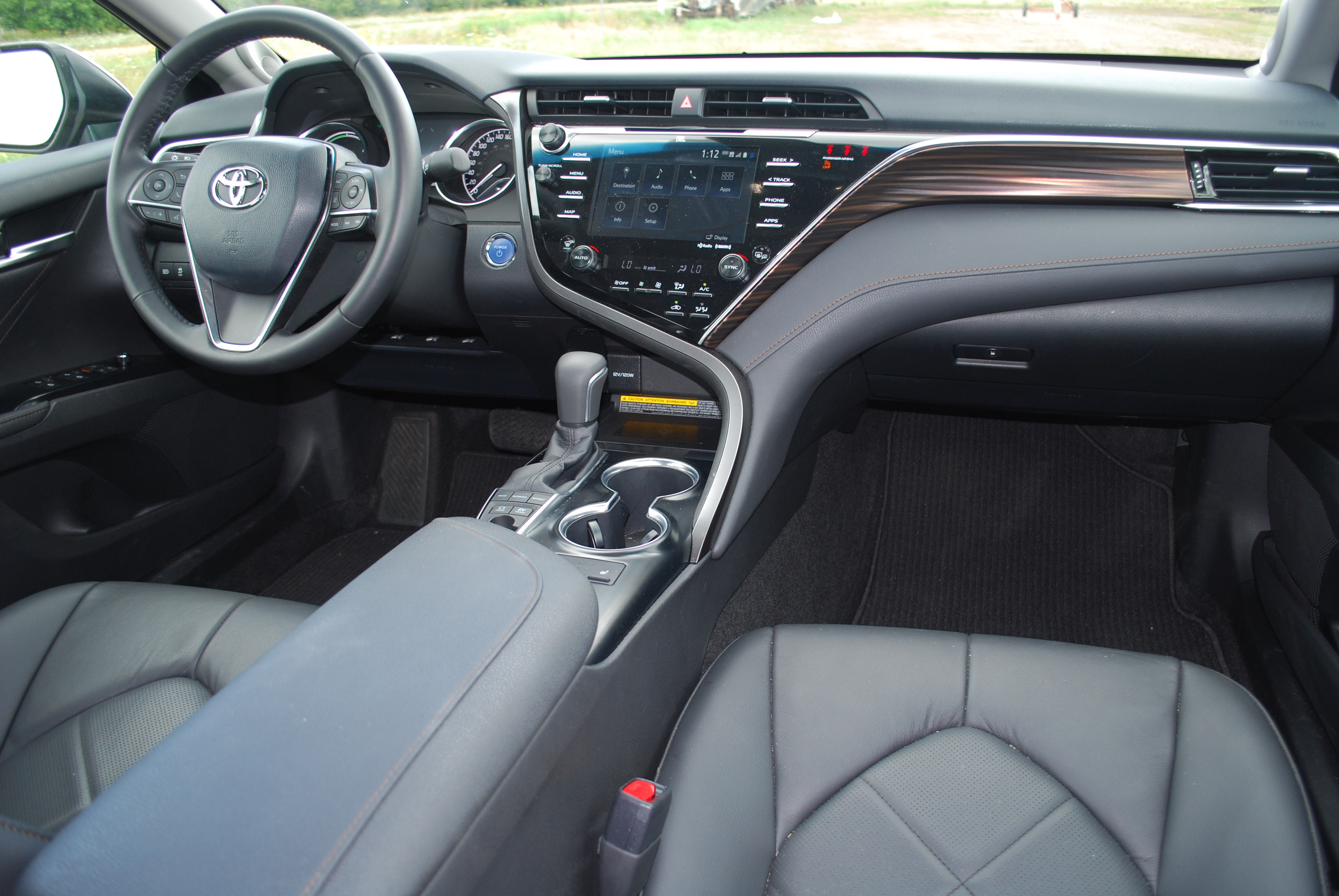 Front seats are all-day comfortable and look neat to boot, with a quilted motif and brazen accent stripe spearing down the upper seatback. Young minions found plenty of space in the rear but carped about the lack of power outlets. Hey, kid: watch the passing scenery instead. Most touch points are covered with soft materials and do not belie any cheapness.

Headroom was at a premium for this author, thanks to the moonroof rudely intruding into the cabin, but folks of non-NBA stature will likely not lodge this complaint. Toyota’s infotainment system is not exactly cutting edge but it works fine and incorporates real volume and tuning buttons for audio duties. Thank you, Toyota designers. A deep well resides ahead of shifter underneath a retractable tray, which provides wireless charging to modern smartphones.

Customers should deploy their math skills carefully before signing on the line that is dotted, as some back-of napkin math reveals the Camry Hybrid XLE will save its owner about $600 a year in fuel costs compared to a normal Camry XLE, based on driving 20,000km per year and a $1.30/L fuel price. The Hybrid XLE charges a $6100 premium over a non-hybrid XLE, a car equipped with a near identical level of kit.

If one can do without leather seats and a few other features, the base model Camry Hybrid LE makes much more financial sense as it is priced only $3800 north of a non-hybrid LE. That means the hybrid tech will pay for itself in six years, rather than ten.

Having traded its wallflower styling for a more distinctive face, the 2018 Camry Hybrid offers a roomy and fuel-efficient driving experience. While it might not quicken your pulse, it is no longer—thanks to Mr. Toyoda and his decree—a recipe for curing insomnia. Choose the correct trim and one will find a car whose comfort level and long legged range make for an excellent travelling partner. 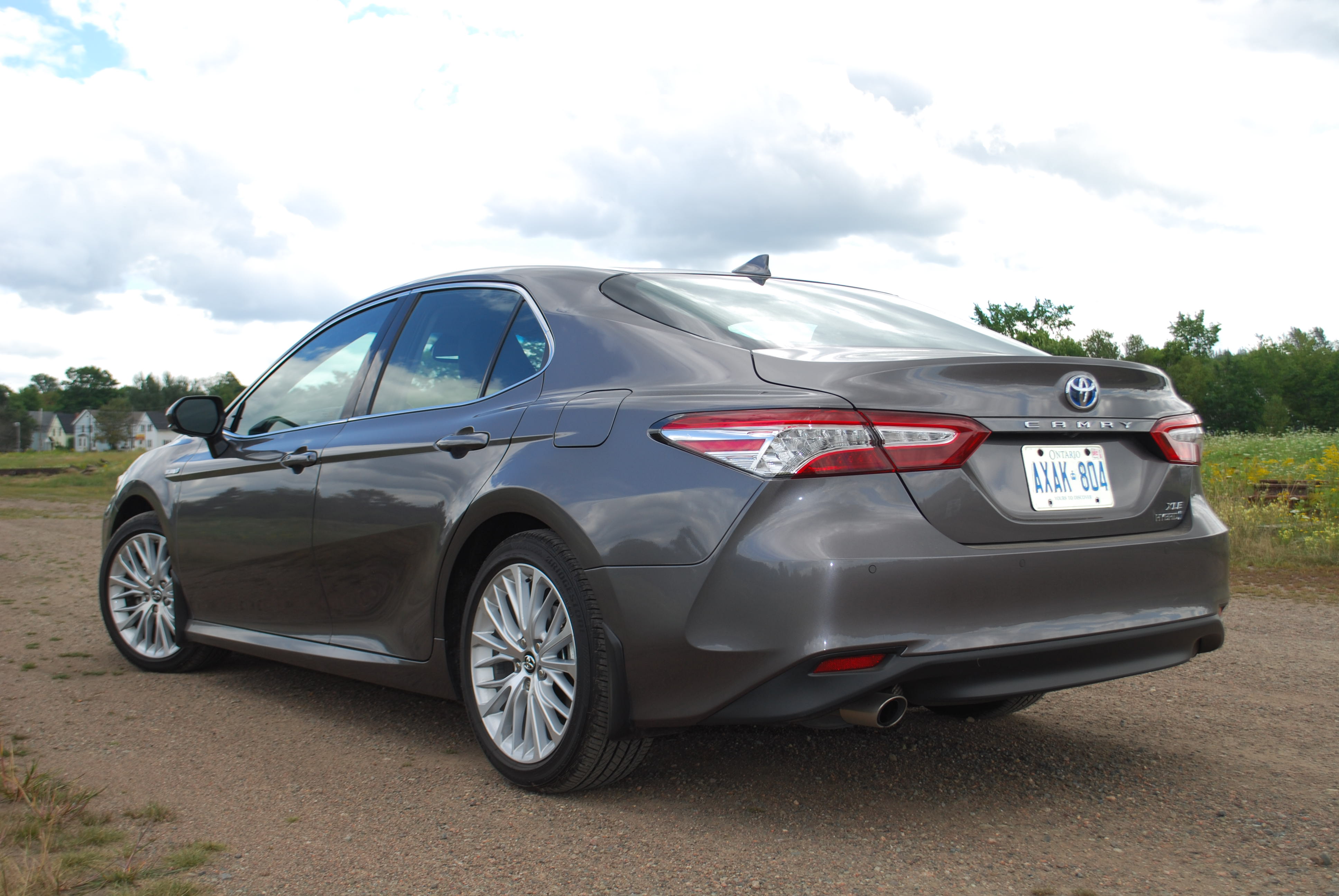 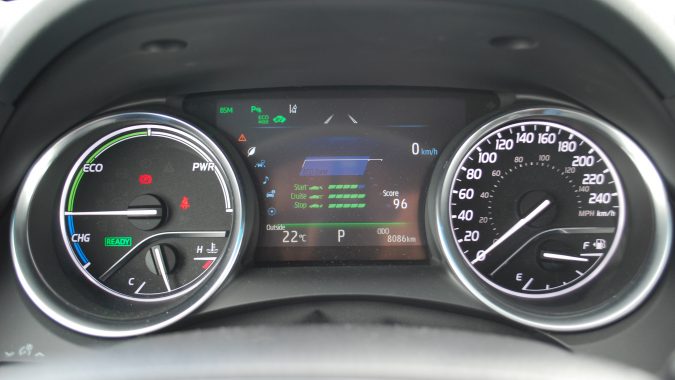 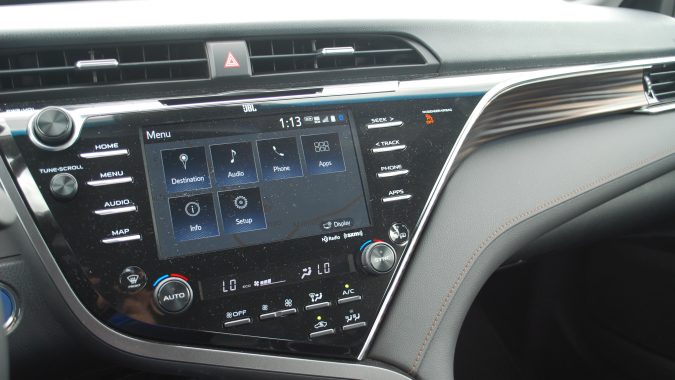 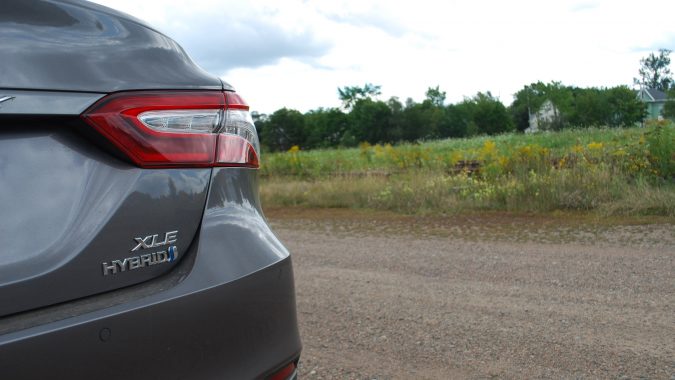