Meet the Cheapest Car in Canada

“That man is richest whose pleasures are cheapest,” according to Henry David Thoreau, 19th century philosopher, minimalist and occasional cranky-pants.

Were he alive today or, more specifically, were he alive on the hottest day of the year when I was picking up a test car, he might have changed his tune to “Jeez, couldn’t we have paid for some air conditioning in this thing?”

This “thing” is the 2108 Nissan Micra S ($9,988), the Mexican-built titleholder of “the cheapest car in Canada” ranking, despite occasional positional juggling with the Chevy Spark ($9,995) and the Mitsubishi Mirage (now resigned to $10,998).

You can’t buy this car in the U.S. but you won’t hear much griping about that south of the border. Small cars don’t do well there, tearing at the fabric of the fragile American ego. Besides, most Americans are too fat to fit.

Micras are doing okay here in Canada though. 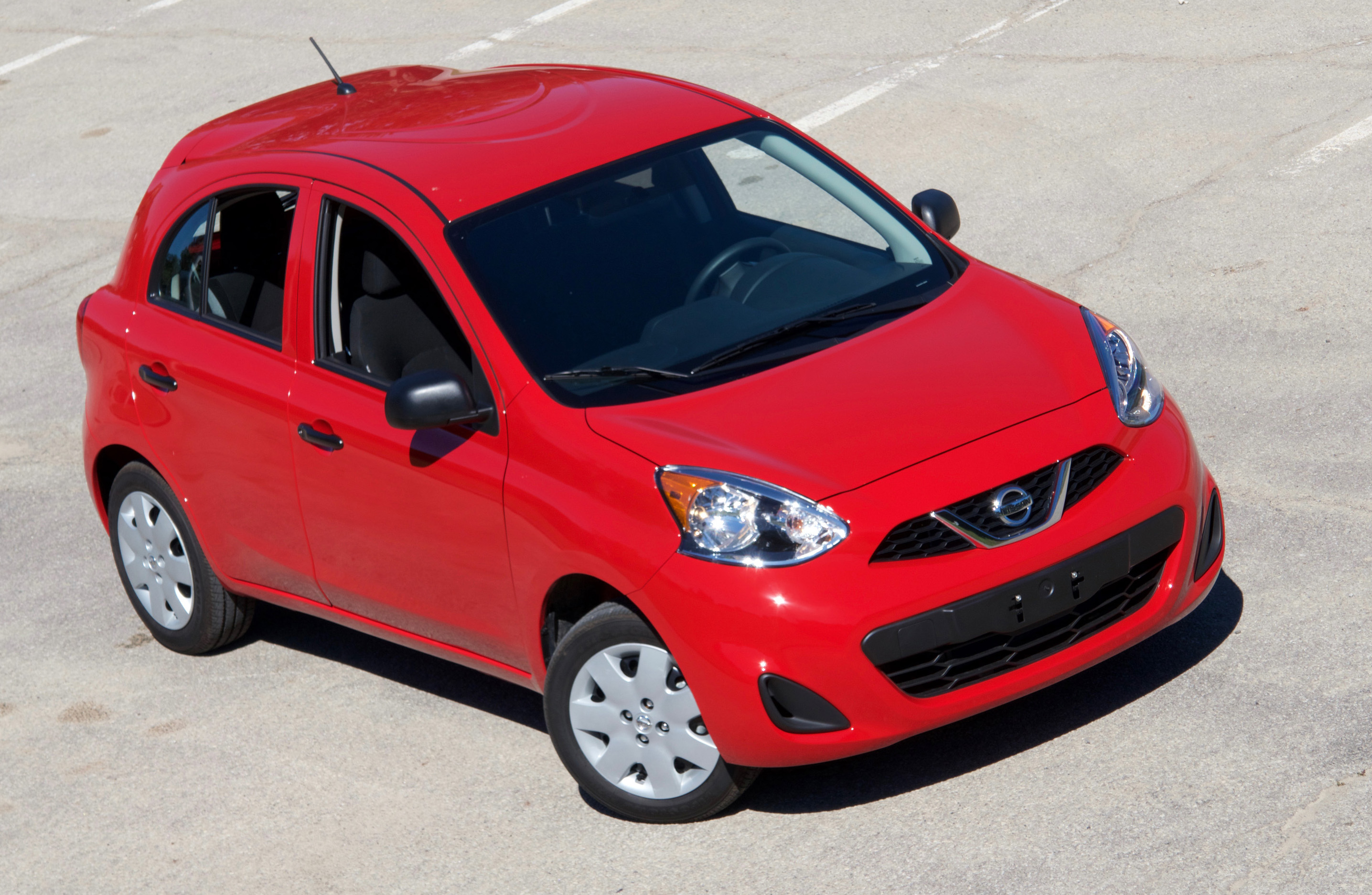 Sure, like all sedans and hatchbacks they’re suffering from the flight from cars to crossovers but they still provide affordable entry to the Nissan lineup. Anything else in the subcompact class – Hyundai Accent, Kia Rio, Honda Fit, Toyota Yaris or Fiat 500 – starts at around $15K or more.

And, worthy of note, the Micra has been holding the price line and is actually $10 cheaper now than when it was introduced a few years ago. Which is a pretty neat trick, one of only a limited number of tricks from this “stripper”. (And, lest anyone get excited, that’s just automotive parlance for a car with zero extras.)

The only thing hot and steamy about this particular stripper would be the passengers, gasping without air conditioning on summer days, whirring crank handle windows desperately for the faint hope of an up-to-speed breeze. 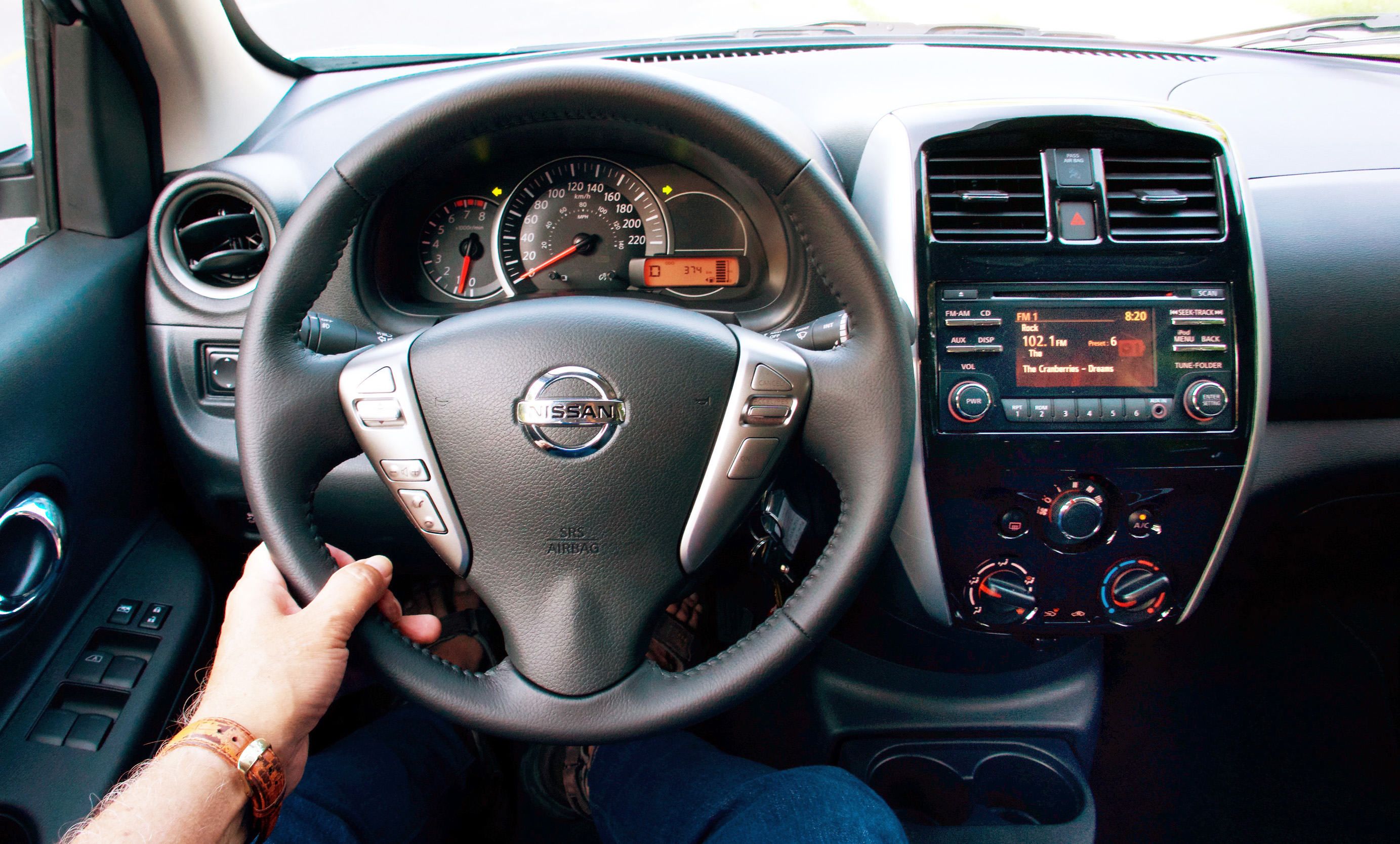 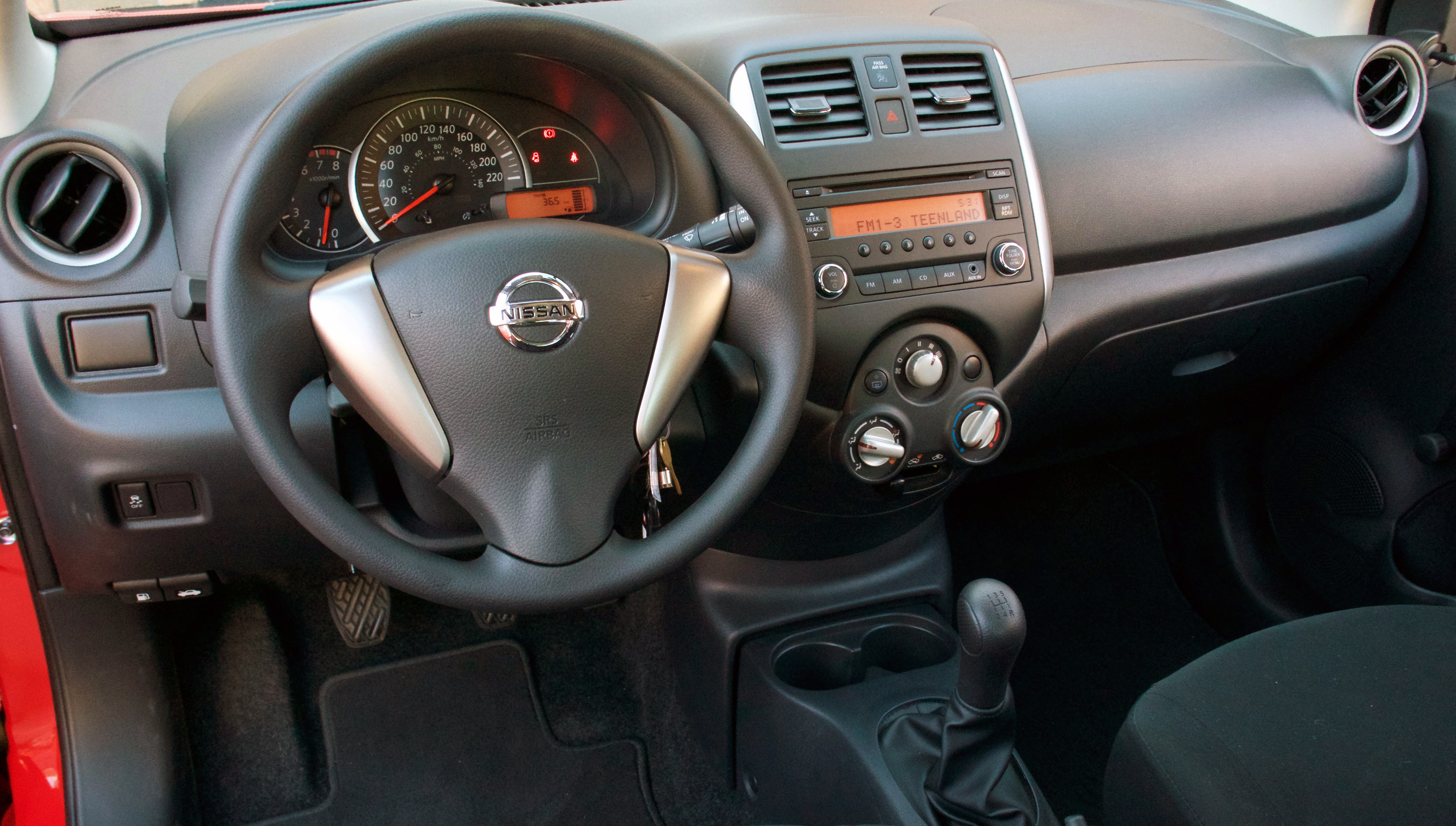 It’s probably easier to list what isn’t in it. Along with the lack of air conditioning and power windows, the Micra S does not come with power door locks or keyless entry.

Meaning you have to circle the car and check each door. Inevitably, you will leave one door or the hatchback unlocked and there’s also an increased chance of locking your keys in the car.

There’s tilt but not telescopic steering, no cruise, no power mirrors, no passenger grip, no vanity mirror, hard cheap plastic all around, no armrest padding, and housings for four-speaker audio but with only two front speakers actually included up front.

This may read like me whining but, na-a-h, on a cooler day we took a long day-trip in the Micra S.

With windows down instead of the usual hermetically sealed cocoon ambiance, it felt more like one of our motorcycle trips – the aromas of the countryside, the wind noise of travel, the flashback feel of rocking to oldies on the simple two-speaker radio.

The Micra driving experience gets an assist from a 1.6-litre DOHC four-cylinder engine that makes 109 hp and 107 lb/ft of torque for a pretty good power-to-weight ratio. 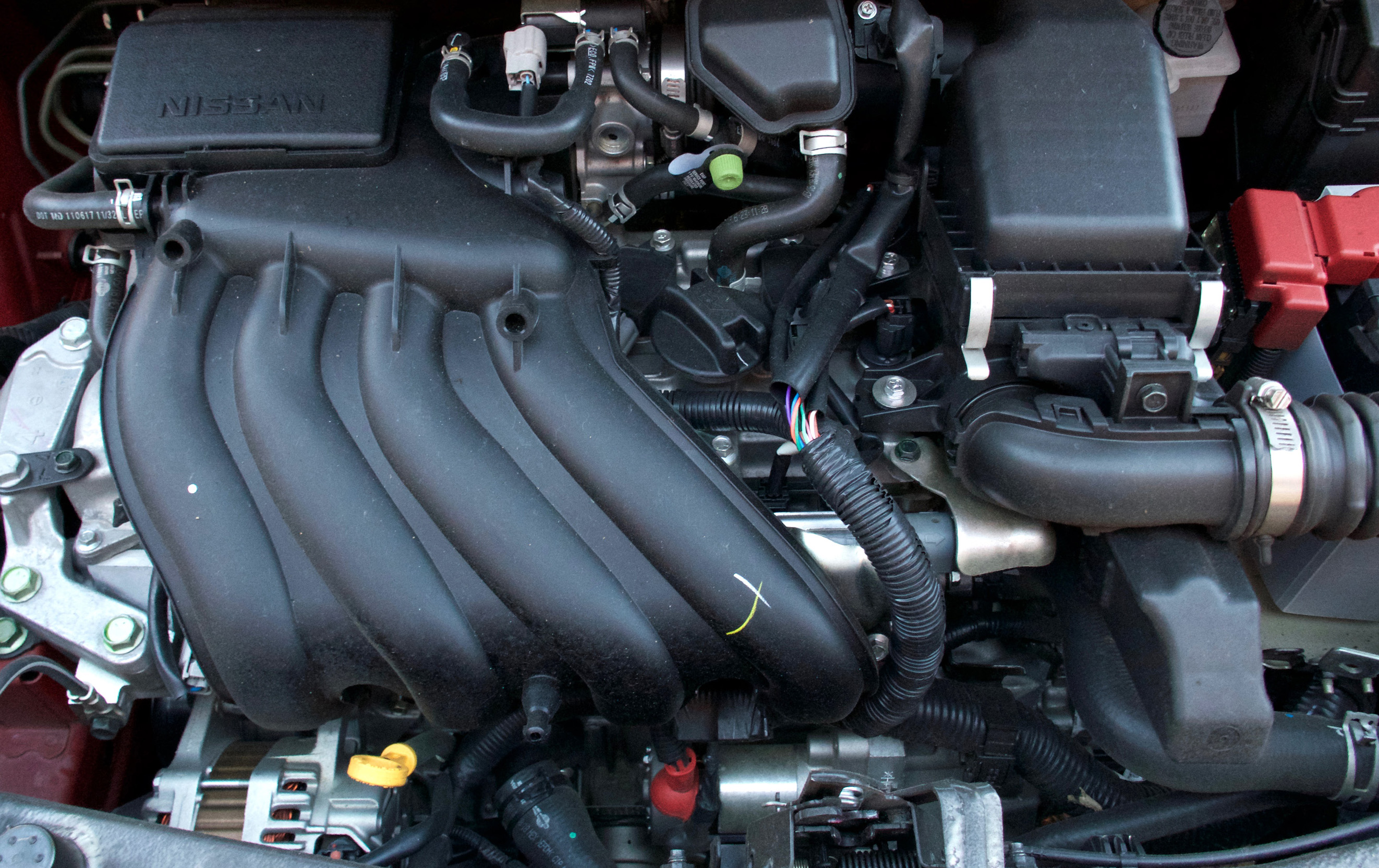 Nissan launched a Micra Cup race series here in Canada to illustrate its unexpected abilities. What muscle there is can be ably tapped through a fun-to-shift five-speed manual or a less fun optional four-speed automatic. Rudimentary trannies, yes, but, hey, it’s an econo car.

All Canadian Micras were tweaked for our road and weather conditions with suspension tuning, a tighter turning radius, adding the 60/40 seat and rear heater ducts and, while most countries start with standard 14-inch wheels, for us 15- and 16-inch wheels, more widely match-able with snow tire sizes.

And this is all wrapped in a package optimistically described in Nissan bumpf as “expressive and aerodynamic”. I tend to lean more towards a “goby-eyed and goofy” description although there’s no denying the Micra’s ugly-duckling kind of cuteness and appeal.

Customers can expand on the Micra S ($9,988) equipment level with an automatic option package ($13,888) that also adds air conditioning, cruise and some trim accents.

I took a comparison drive in an SR model that upped the ante in included equipment significantly and also included the do-able but more pedestrian four-speed automatic.

Certainly more bang, but also more bucks and, at $17,388, customers would need to take a long hard look at moving further up the lineup for alternatives like the Versa Note ($15-20K) or the Sentra ($16-21K).

One final note – with backup cameras legislated, the base 2019 Micra S will be adding a rearview monitor on a seven-inch touchscreen while also responding to shopper feedback with USB ports, Bluetooth and a Siri eyes-free system.

Pricing for 2019 has yet to be announced. 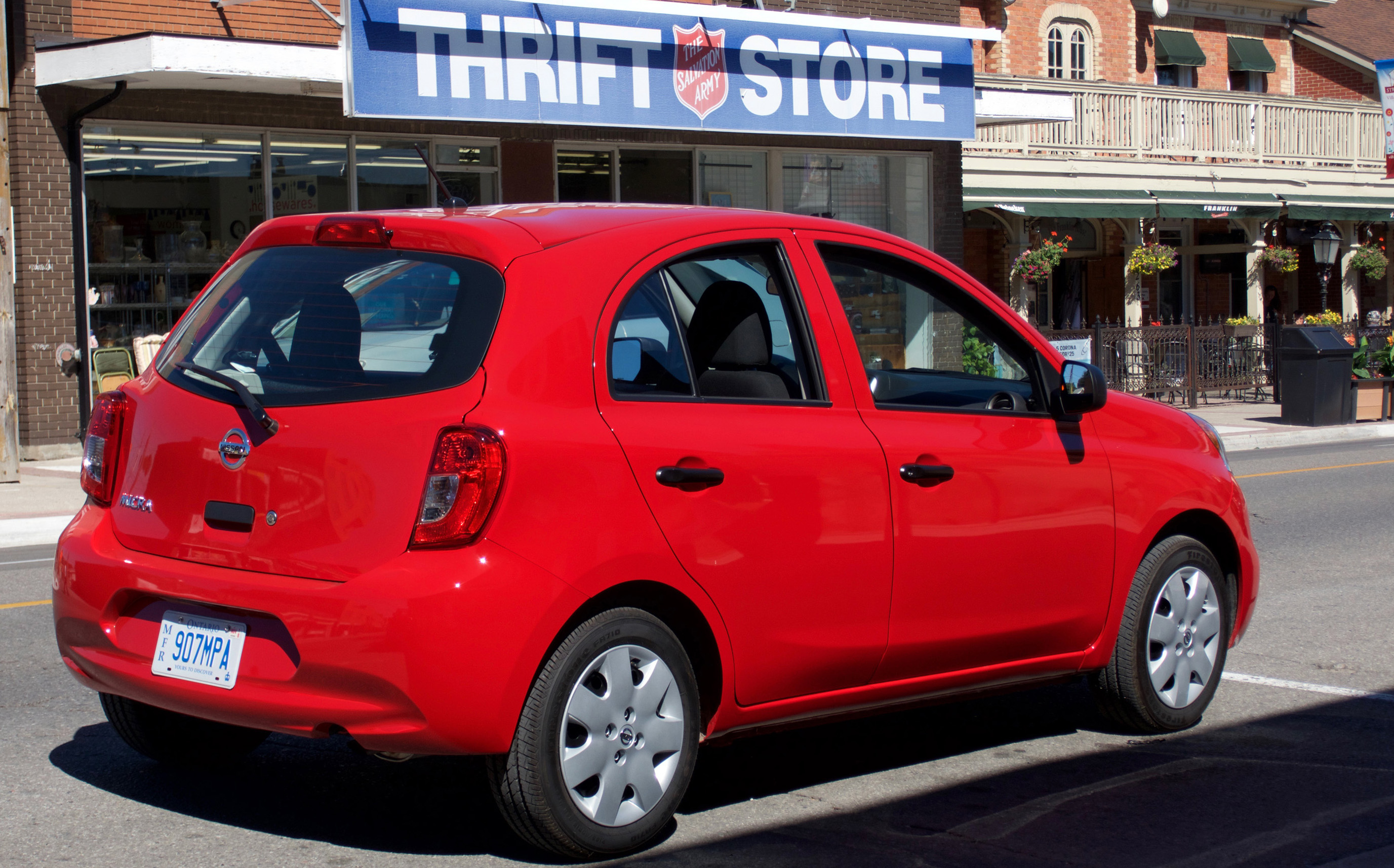 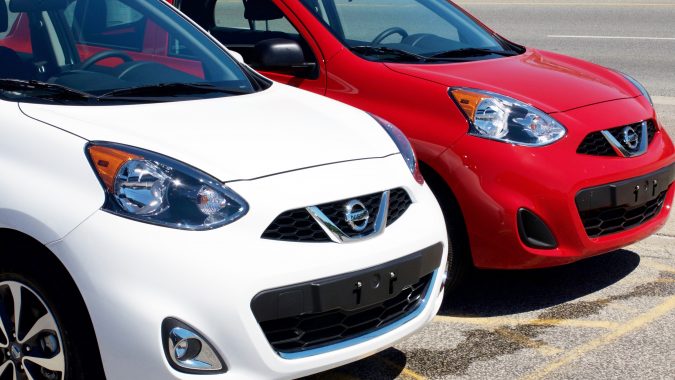 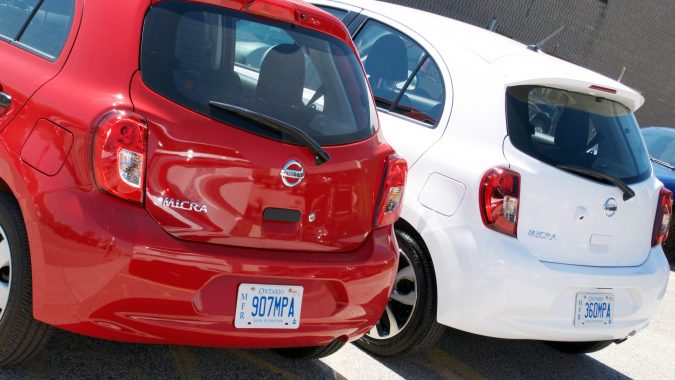