The IS sedan is the quintessential support player in the Lexus lineup.

It’s no superstar – the sales juggernaut RX mid-size SUV is, in case you were wondering – but is still a valuable contributor on a winning team, a key support piece who accepts their role willingly and performs it to the best of their ability.

Aside – I’m writing this in the midst of the start of the NBA and NHL playoffs, which I blame for filling my head with sports clichés. If you don’t get the gist of my lede, I’m sorry—but with that said, I think most of you know what I mean. Playoff fever is hard to avoid in the Toronto area these days.

Right then, so where was I? Oh yes, the Lexus IS sedan.

Hard as it might be to believe, the IS has been in the Lexus Canada lineup since 2000 (and since 1998 in Japan), and while the current edition is completely modern, echoes of the first-generation car remain. 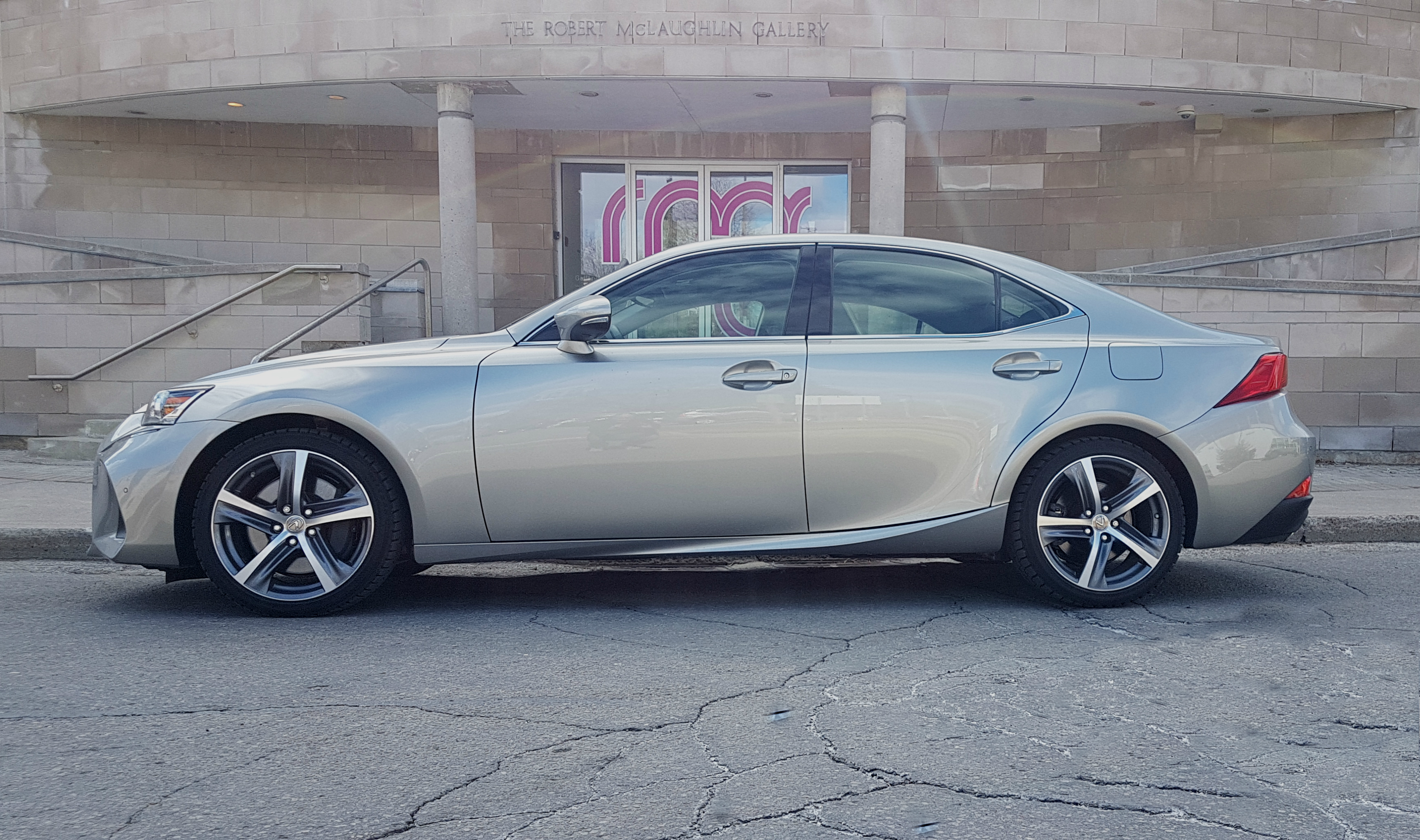 Still a solid sales performer? Yes, although it’s not as big a seller as it once was thanks to the rise of the SUV, the IS ranks third behind the RX and NX utilities on the Lexus Canada sales chart (3,221 sold in 2017).

Tongue-in-cheekiness aside, the IS has evolved over the past two decades but, unlike a lot of other cars that have strayed significantly from what they once were, the compact Lexus still slots into the same entry-level spot it as it did in 2000.

The current third-generation model was all-new in 2014, received a mild styling update in 2017 and rolls into 2018 more or less unchanged.

For the Canadian market, the IS range consists of three models: 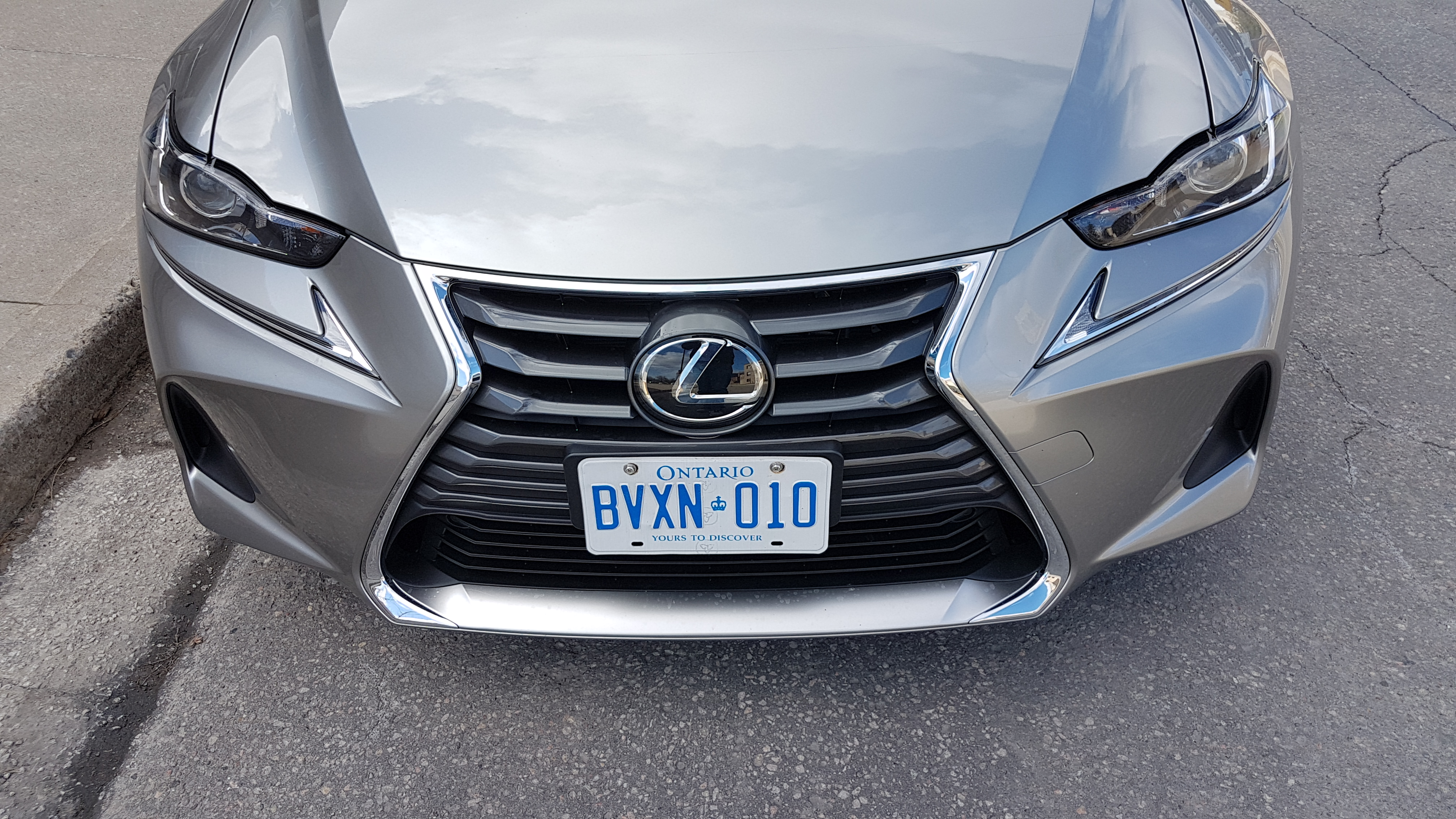 The focus of this review is the one at the bottom of that list: the IS 350 AWD.

There are a lot of options from which one can choose whilst shopping in the $40K – $55K compact luxury sedan market. From the Audi A4 and BMW 3 Series to the Infiniti Q50, Jaguar XE and Mercedes-Benz C-Class, the deck really is stacked.

With such a deep pool of contenders, standing out is a tall order, and Lexus addresses that challenge in several ways with the IS 350.

The first bullet in the chamber, so to speak, is a handsome, contemporary design. As mentioned, the IS 350 has a standard three-box design, but it has plenty of interesting surfaces, lines and shapes that give it an attractive appearance from all angles.

The ubiquitous Lexus spindle grille has a strong love-it or leave-it quality, but I think it looks sharp on the IS 350. The small, but chiseled LED headlights that flow into the fenders and check mark daytime running lights give the car a distinctive front-end look, while at the rear, squarish exhaust outlets and long, wrap-around LED tail lights create a prominent three-dimensional appearance.

Overall, it might not be the best-looking car in its class, but I chalk that up to depth of the competition, because the IS 350 is far from an unattractive car.

The second arrow in the quiver of the IS 350 is its powertrain. The 3.5L V6 is nothing fancy – its been around for years and Lexus stuffs it into a lot of its products – but it feels responsive, both off the line and in the mid-range, it delivers a pleasing exhaust note (in sport mode) and returns respectable fuel economy.

Paired with a six-speed automatic and all-wheel drive, it hustles the 1,695 kilogram IS 350 with good haste and performs well in everyday driving situations. While it doesn’t produce a gaudy amount of horsepower and torque, and isn’t brimming with a lot of sexy technology, it performs just fine – at no point did my Atomic Silver tester feel underpowered. Again – not flashy, just effective.

Ride quality is neither firm, nor soft – the front double wishbone / rear multilink suspension setup does a reasonably good job of absorbing bumps and imperfections on all but the most pockmarked and cratered Toronto-area roads. Inside, the environment is also reasonably hushed thanks to a well-insulated interior that keeps most of the noise out, save for a pleasing growl when the drive mode selector is switched to sport.

The third shot from the IS 350’s cannon is standard content, and this car comes with a lot of it. From a slew of collision mitigation tech from Lexus Safety System+ to premium Mark Levinson audio, navigation, satellite radio, dual-zone climate controls and a leather interior, just about every bell and whistle is accounted for.

The cabin isn’t the most high-concept – in some ways it feels almost retro with its shapes, hues and textures – but there’s an absence of clutter, everything is within easy reach and the operation of its many features aren’t shrouded in mystery or plagued by odd design choices.

Are there nits to pick? Of course. The infotainment touch controller, which appears in some shape or form in every Lexus, is needlessly fussy and diverts too much of the driver’s attention to operate. And even if it isn’t old tech, it feels like it is. A reworking would be welcome. 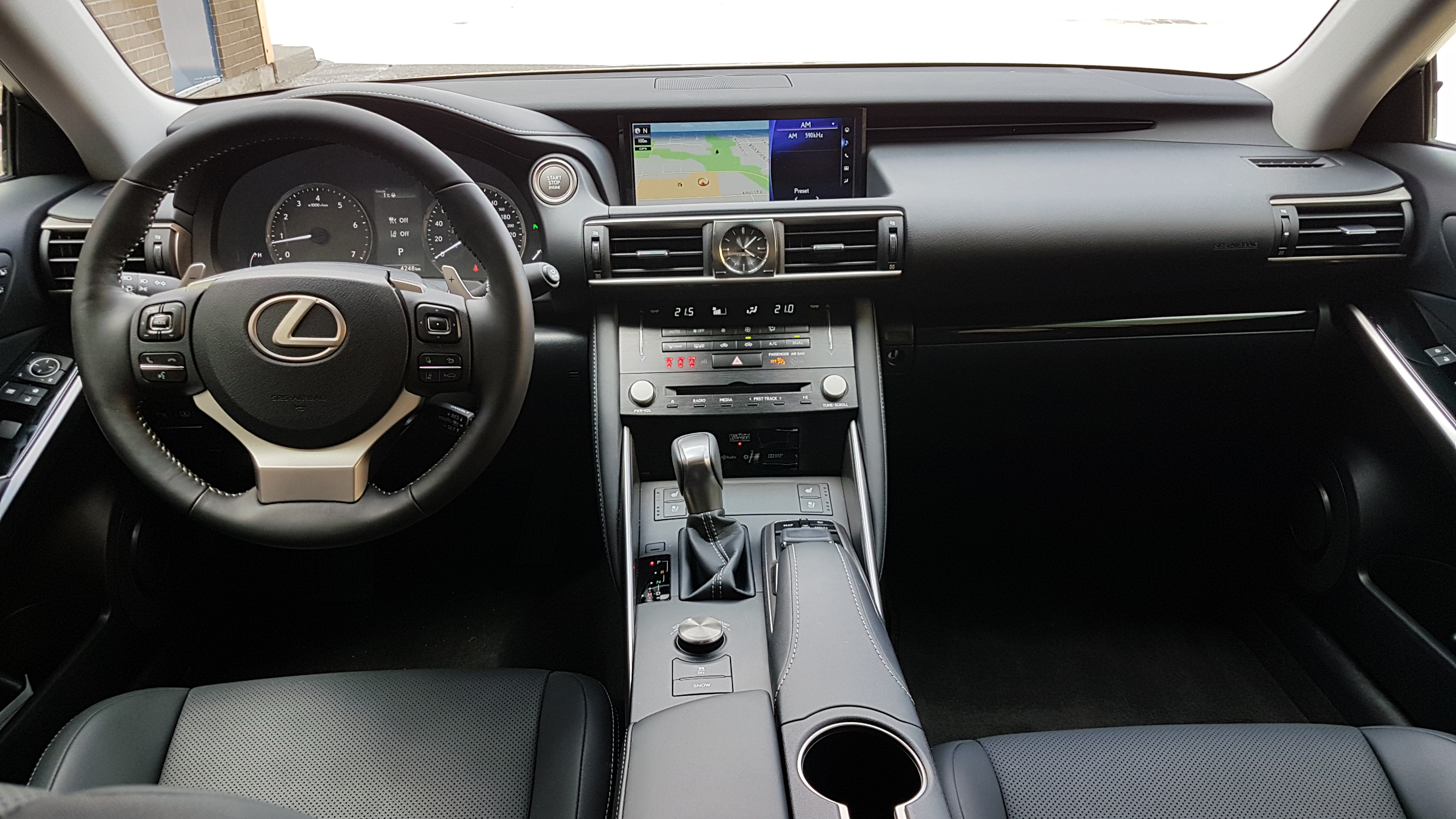 Then infotainment screen itself is a decent size (10.3-inch), but it feels a little laggy at times and the graphical resolution looks grainy and has a last-gen aesthetic. Like the controller, it could use an overhaul.

Otherwise, the IS 350’s interior is quite pleasing. The leather-trimmed seats offer good support, are quite comfortable and are both heated and cooled. The backseat area is a bit tight for taller occupants, but it’s comfortable and this six-footer had enough leg and head room to not feel squished.

All told, the IS 350 makes a compelling case in the compact executive sedan market.

It doesn’t blow one’s socks off at first blush. It’s not the most powerful, it doesn’t have the most advanced powertrain, nor does it have the slickest interior.

But over time, its appeal grows: good looks, solid performance, a (mostly) user-friendly interior with a pile of standard features that owners will appreciate having. All at a competitive price.

In short, the IS 350 isn’t the LeBron James of the Lexus lineup. It’s more like Kevin Love – a savvy vet who knows what it takes to win. 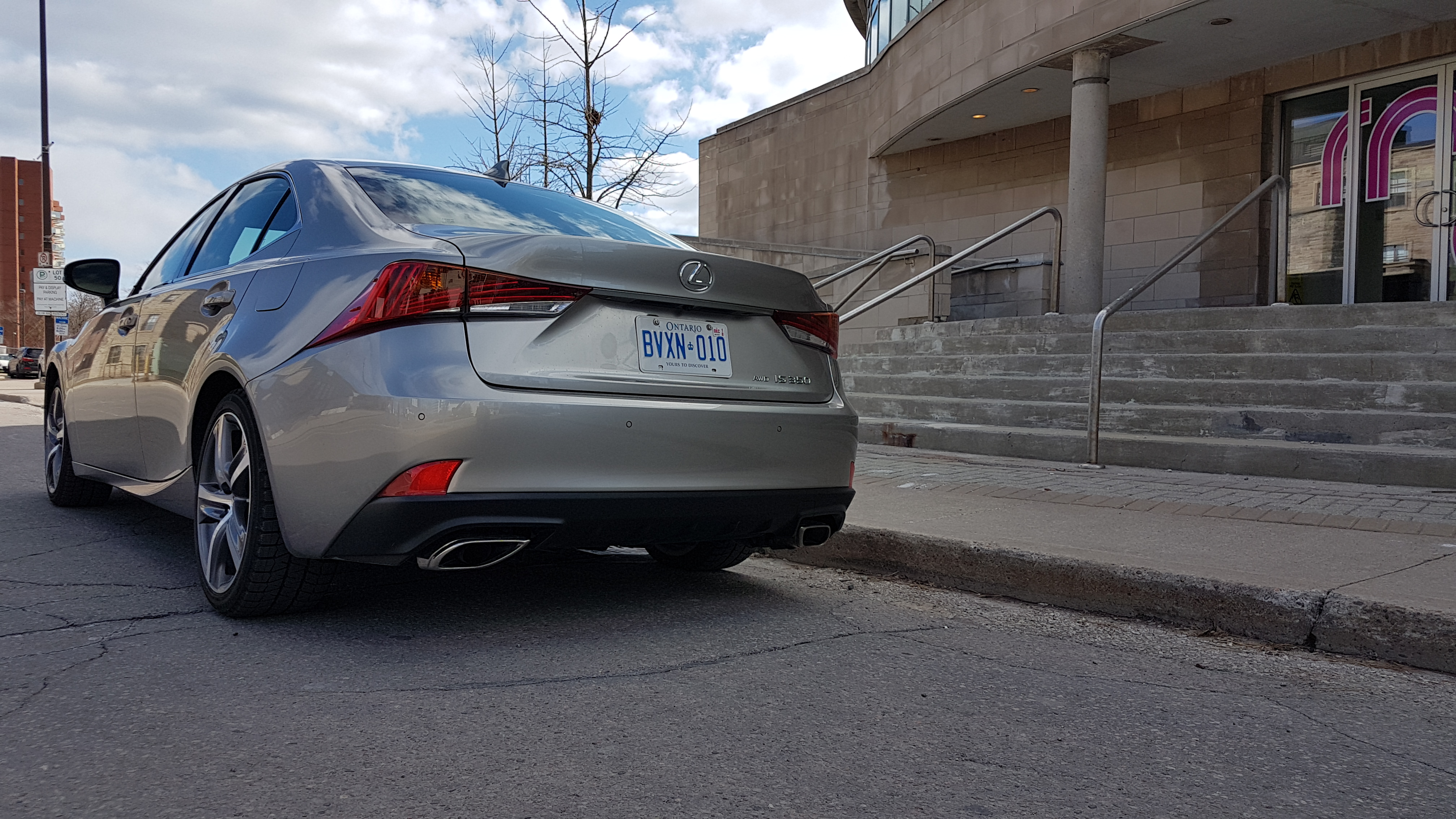 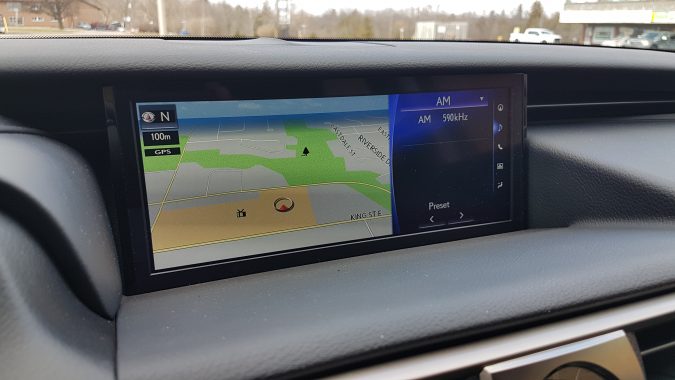 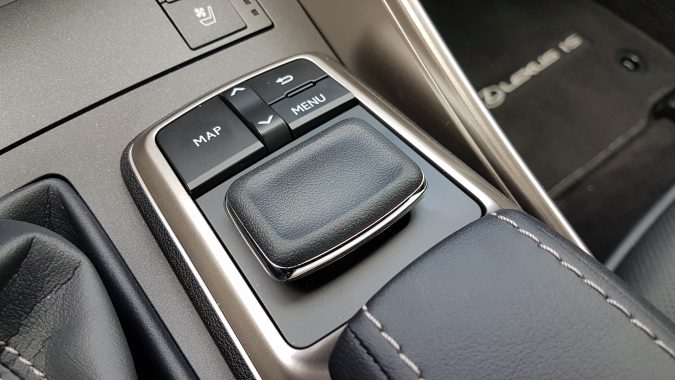 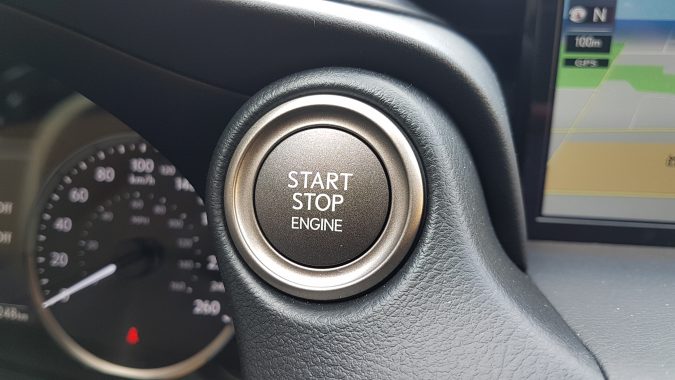 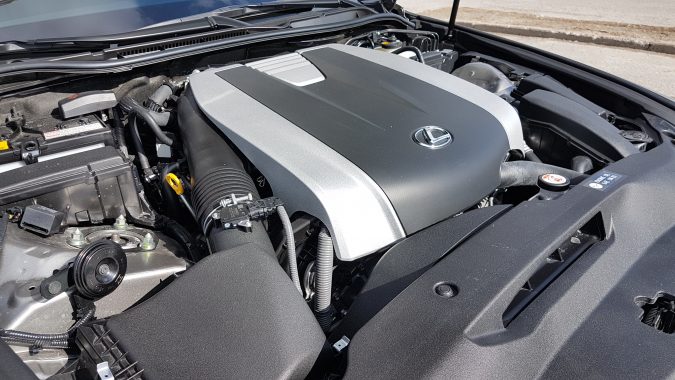 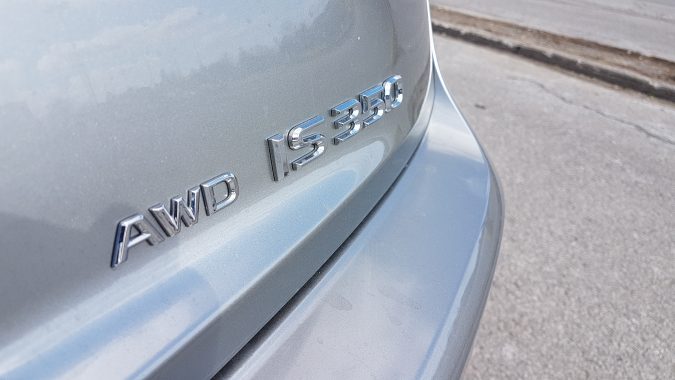