The real question in the case of the Soul Turbo, though, is does it make it fun for drivers?

With its quasi-Mini Cooper Countryman looks (and the great visibility and interior room it gets as a result), dimensions that say “hot hatch” to some, and “crossover” to others as well as doo-dads like colour-changing speaker bezels and somewhat wacky colour seats – not to mention a full EV model – the Kia Soul has always harboured a certain charm.

Younger buyers like it for its looks, older buyers like it for its accessibility and roominess; it always had this completely inoffensive, somewhat bulldog puppyish, cheerful attitude about it. Not to mention it was one of the first entrants in the subcompact crossover segment that every manufacturer seems to be rushing the stage to get to these days.

The one thing it always lacked, however, was power. No matter how funky it looked and acted, few would ever have called it and its 161 hp naturally-aspirated 4-banger “fast”.

Then, about four years ago, a small, 1.6L turbo engine started appearing in some of the Soul’s Kia siblings and Hyundai cousins; the Kia Forte SX got it first, then the Hyundai Veloster a couple of years after that. These were both front-drive hatches that shared a common platform with the Soul, and it seemed perhaps the time was ripe for the Soul to get a little forced-induction boost of its own. 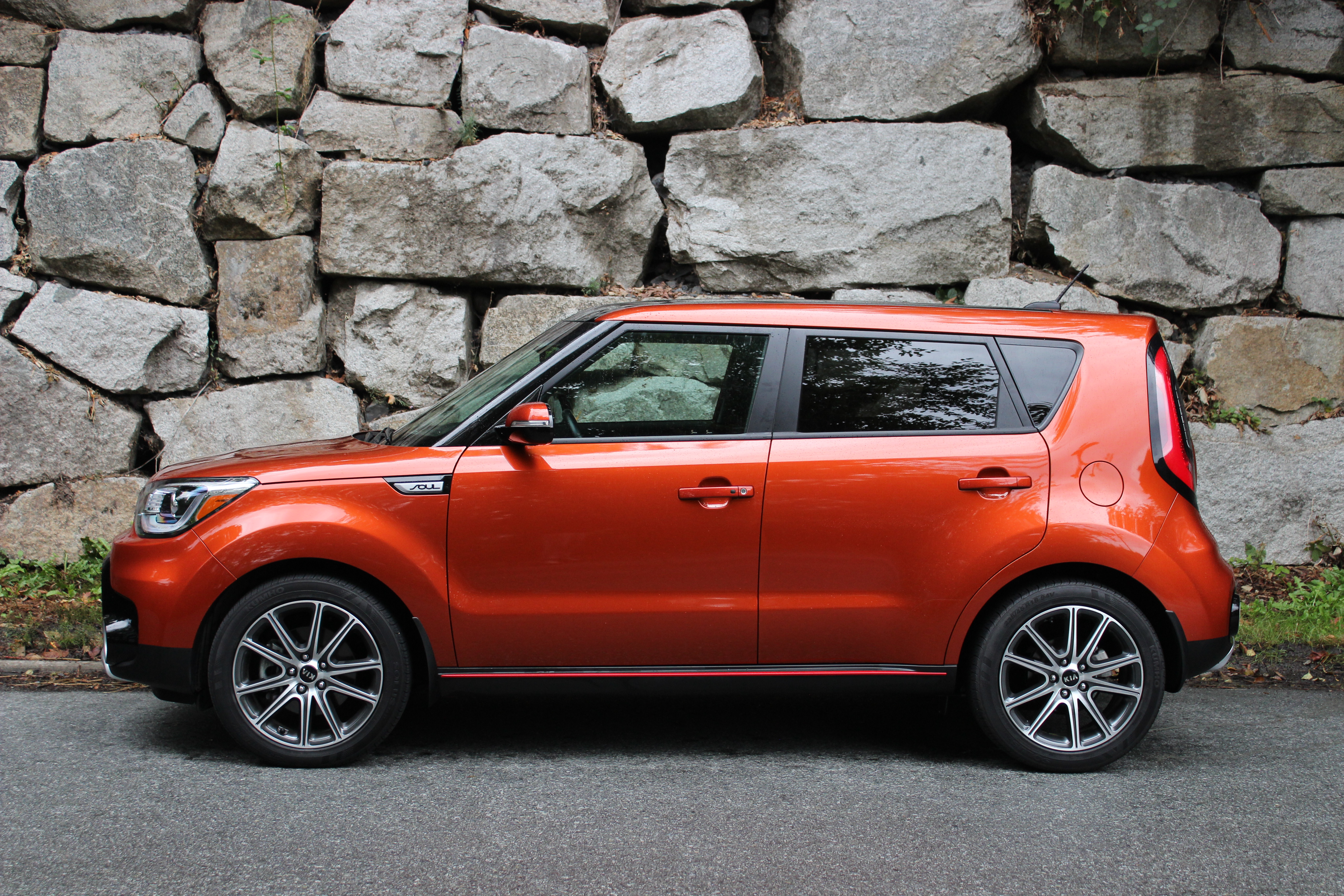 We’d have to wait, though, for the Soul to finally make its turbocharged breakthrough as a 2017 model.

Like the 2017, the 2018’s turbo’d four banger makes 201 horsepower and 195 lb-ft of torque; these aren’t Honda Civic or Hyundai Elantra GT figures; these are Volkswagen Golf GTI—on the hp front, anyway—or Honda Civic Si figures, and they are now serving duty in one of the funkiest cars you can get today. Even more so with VW’s announcement they’re killing off the Beetle.

Style-wise, you can tell my car is a somewhat hotted-up Soul, what with its funky 18-inch two-tone wheels, import tuner-esque rear diffuser with dual (!) exhaust tips and the requisite “turbo” badging. My car’s Wild Orange (sure! Why not?) paint job is also right on the money for what this particular Soul is all about.

Inside, black cloth/leatherette seating with contrasting piping and flat-bottomed wheel (totally unnecessary, but cool nonetheless) do a good job of ramming home that sporty-hatch vibe. The rest is standard Soul – door speakers with colour changing bezels (you can set them to “off”, “mood” or “music” and what the lighting does responds in kind), vertical-look speakers above the dash and broad dash fascia, with all buttons tightly aligned around the 7” touchscreen. Overall, it’s a really fun place to be and while you may think all those dancing colours would be distracting, they really aren’t. They’re just kind of cool. Apple CarPlay and Android Auto are also supported; happily, my time spent with the Soul revealed no connectivity or performance issues, even with Google Play Music, which seems to always have trouble when used in conjunction with CarPlay. I was left to enjoy the Soul’s pleasantly robust sound system with little trouble. 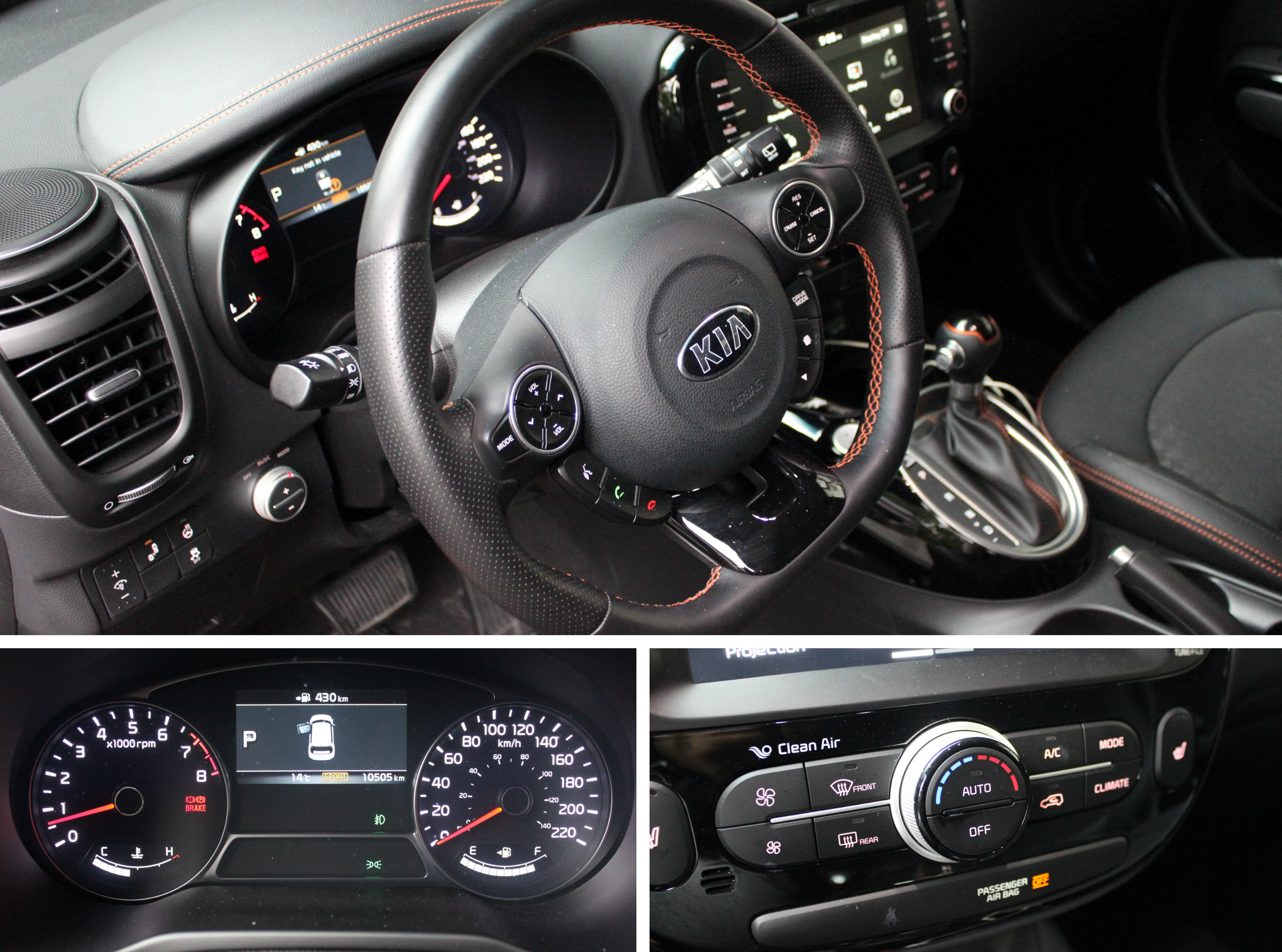 Actually, the whole interior experience with the Soul Turbo is trouble free; indeed, you can see why it’s so popular. The door openings both front and back make for easy access, as does the high-mounted seat. Then, once in, the greenhouse is tall so you get a great view out from all angles. The seats are a little flat and the seating position quite upright, but with such a high roof, it doesn’t affect headroom, even with the excellent panoramic sunroof on my tester. That, of course, adds to the brightness already provided by the tall windows. I also love how the heated steering wheel comes on quick and how the whole rim is heated, as opposed to just the area around the 9 and 3 o’clock positions as is the case on some cars.

The boxy styling also means a nice amount of storage space, which is complimented by fold-flat rear seats and even some divided underfloor storage. Couples should have no problem at all, and even families of three will be fine with just a little creativity, as long as they keep the kid or pets in the somewhat snug rear seat. The bottom line is I always looked forward to getting into the Soul; as soon as you’re sat inside, you get the feeling that much attention has been paid to make it as easy on occupants as possible, and I dig that.

C-HR is a Small Car with Lots of Style

The real question in the case of the Soul Turbo, though, is does it make it fun for drivers? After all, that’s what the addition of a turbocharger is all about, right?

Well, power is sent to the front wheels via a single transmission choice – a 7-speed dual-clutch auto – which means one of the aspects of the truly great hot hatch or sporty compact – think Honda Civic Si/Type R, Mazdaspeed3, VW GTI – is missing. Those are all available with a manual transmission, and some are only available as such. Now, the Soul isn’t exactly a hot hatch – as we talked about earlier, it’s more a subcompact CUV – but the fact that they added the Turbo suggests that they’re trying to reach a different buying group; a buying group that likes a manual ‘box. That’s not an option with the Soul; heck, you can’t even shift gears yourself via wheel-mounted paddles. You’d think they could have given us that. 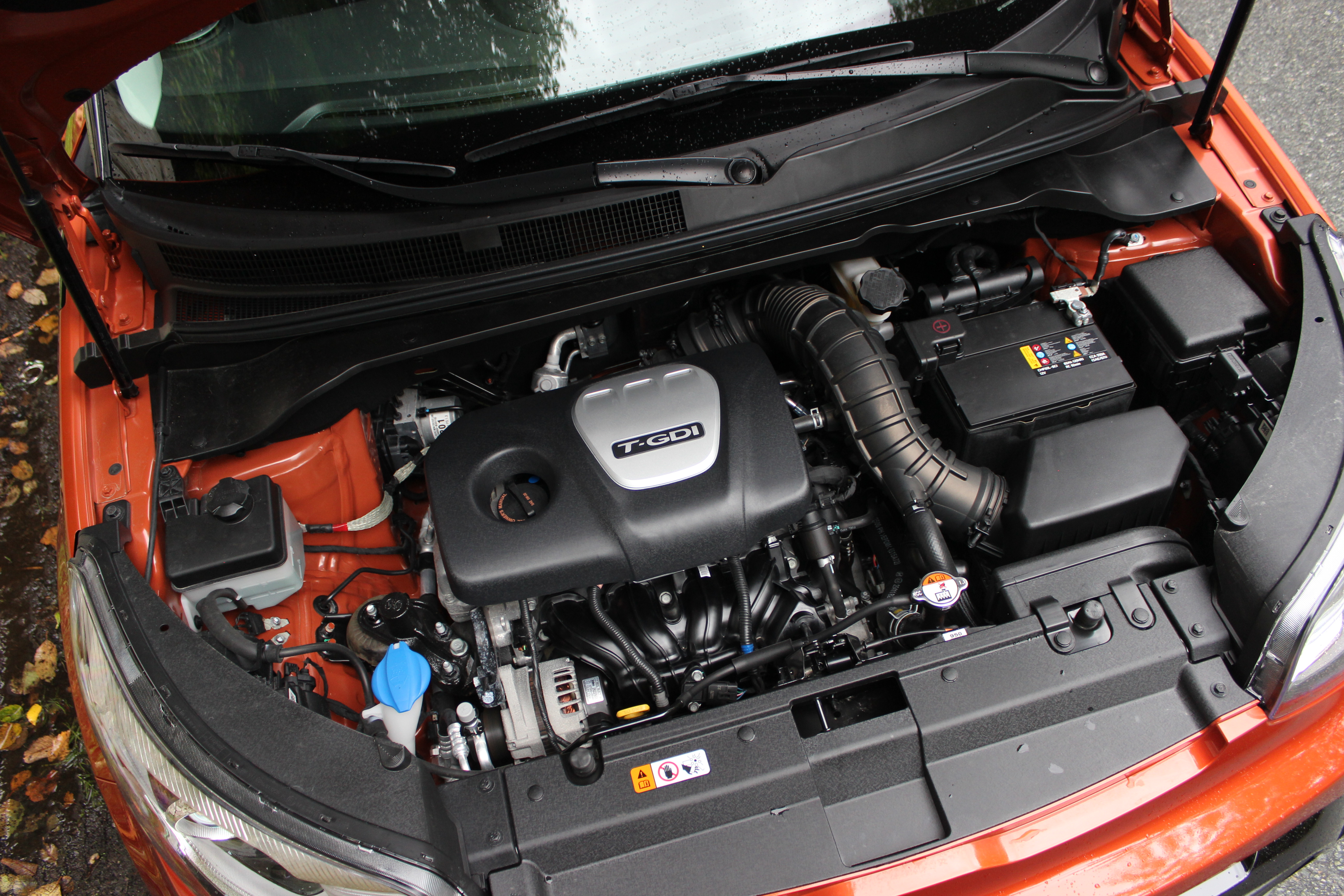 Luckily, aside from a little turbo lag through the first 1,000 revs or so, power comes on generously and quickly; peak torque starts at 1,500 rpm and continues through to 4,500, meaning a nice surge of consistent power. Passing at speed is no issue, and if you focus on keeping it on boil through bendy roads, the Soul acquits itself relatively well on the power front. You can of course shift it yourself by bumping the shift lever fore and aft, but it’s not something I found myself doing all that often.

Handling-wise, not much changes from standard Souls; yeah, there are the bigger wheels but the Kumho tires are still pretty skinny with soft-ish sidewalls, so you never quite forget that you’re driving a pretty tall car with perceptible body roll. The steering, though, is responsive and there’s even a modicum of feel through that chunky flat-bottomed wheel, all nice departures from your typical people-moving crossover. The ride is also nicely composed, so even though it’s tall and all, the everyday bumps you come across on a daily commute are nicely absorbed and dealt with. 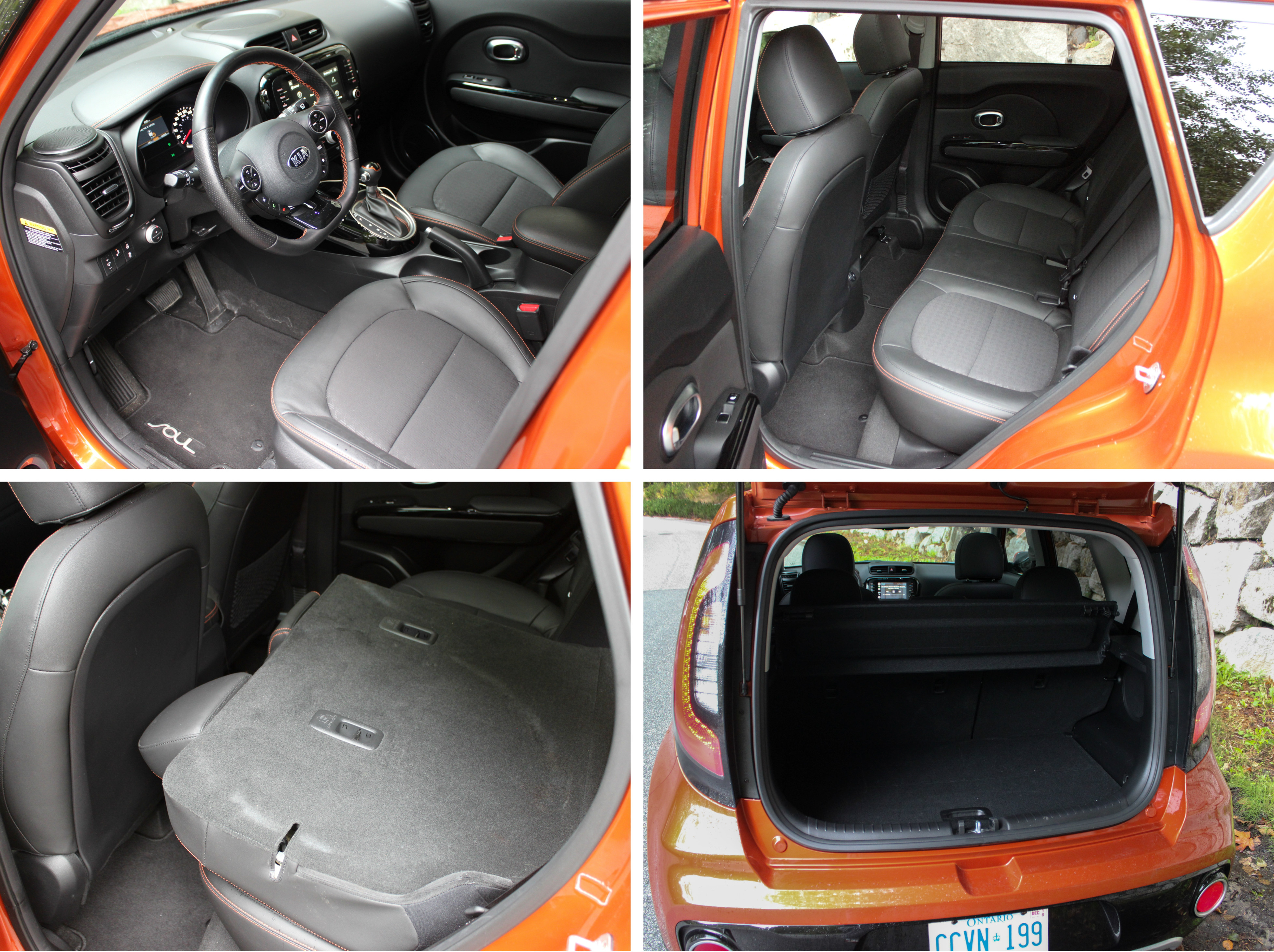 So, the Turbo version has managed to add a little power, without compromising the rest of what makes the Soul great. The looks, comfort and trendiness are still in place – but, does the turbocharger and the $6,000 it commands over a similarly-equipped non-Turbo Soul fill a gap worthy of the price increase? I’d say that if power is what you’re looking for, it has. However, if you’re looking for a performance conversion a la Civic Si or something along those lines, I’m not so sure you’re going to find it here; there’s the transmission issue, nothing has really been done to the handling of any note and if it matters to you, you’ll never get the re-sale value here as you would with a Honda. Having said that, though, I’m actually willing to forgive the Soul Turbo that because it’s so very well executed in every other way, that a little extra juice kind of completes the package. In all honesty, it’s to the point where I can see myself considering the Soul Turbo and its more generous accommodations – as well as this newfound power – when looking for a more traditional sporty compact, let alone any other subcompact CUV. 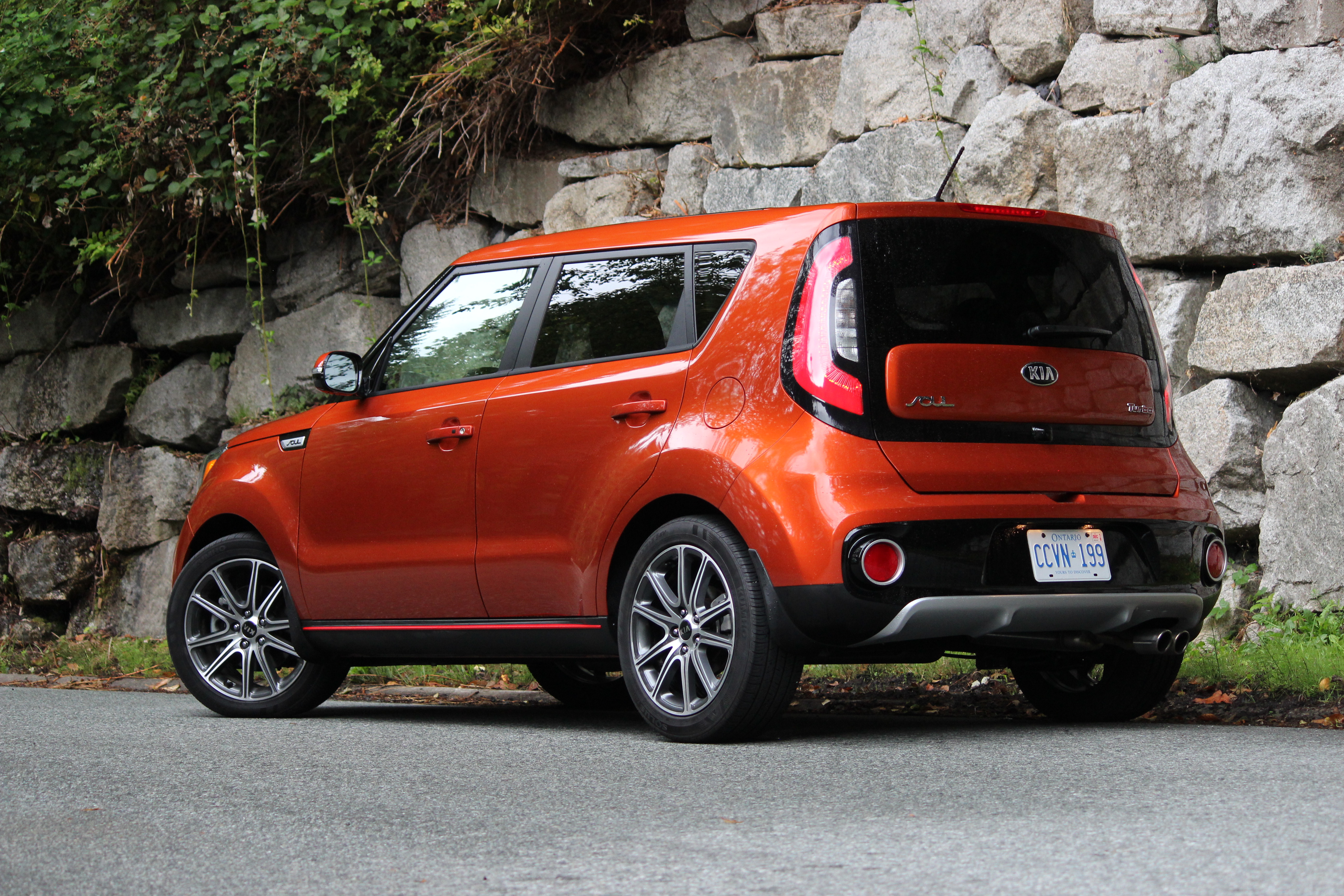 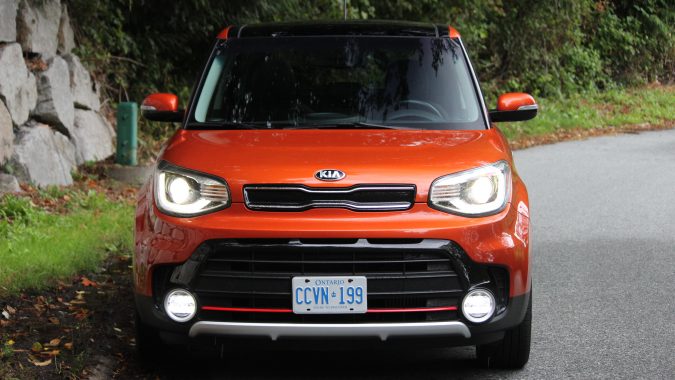 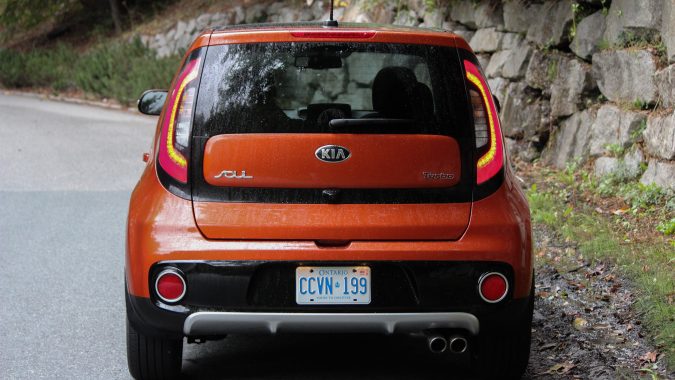 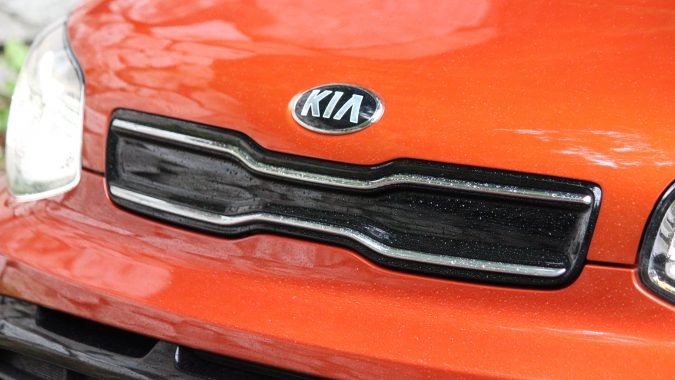 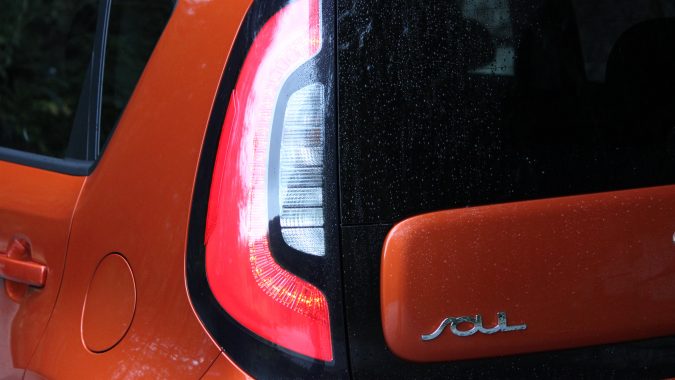 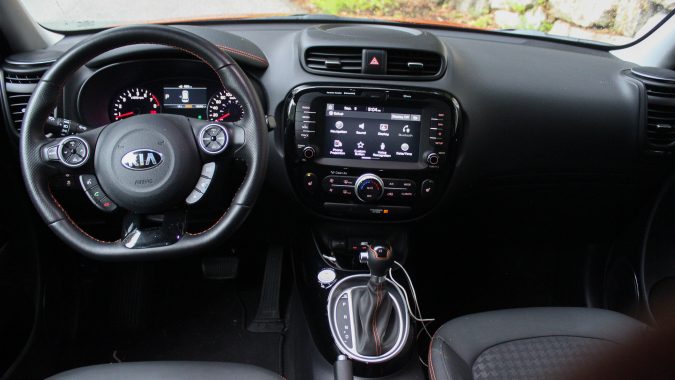 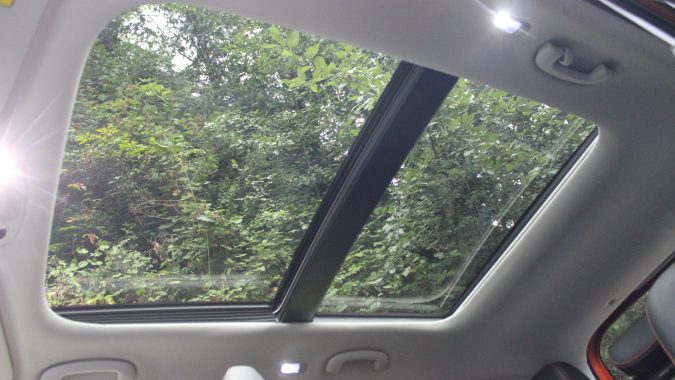 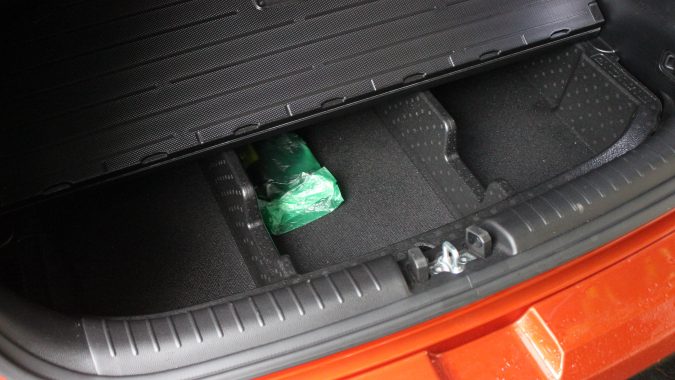 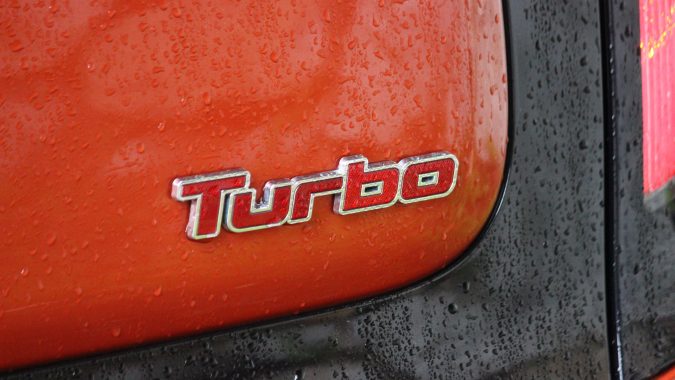