The sky over the little dairy bar, whose proprietor was kindly doling out the last of their ice cream cones to children on a late-fall afternoon, was quite gray. Summer’s over for these kids but – like most kids – they really don’t care. After all, Halloween and its festival of sugar was only days away.

One item in this bucolic picture, the 2019 Hyundai Kona, is decidedly not gray at all. In fact, its eye-popping Blue Lagoon paint is brighter than an asphyxiated Smurf. It’s sharp front end has narrow LED running lights perched atop its fascia, like the eyes of a suspicious school headmaster. Its headlights are actually mounted in the car’s jowls, not unlike the departed Nissan Juke. The works of it makes for a very expressive face, save for a puerile mail-slot sized fake grille just south of the hood’s cutline.

In fact, Hyundai seems bent on making the whole car very expressive. A walk to the rear reveals a similar theme, with skinny taillights mounted high and a bulbous set of turn signal/reverse lamps punched low into the Kona’s outside corners. A drawback of this setup is a potentially expensive repair in the event of a minor parking lot bump. Remember when bumpers used to be for bumping? Not anymore.

Good thing the Trend trim of this Kona is kitted out with all manner of parking aids, then. A rearview camera is expected (and present) these days, as are all manner of parking assists and guidance displays. In fact, your author truly believes the Hyundai infotainment system has improved to be one of the best in the industry, bundling fast responses and good graphics with Apple CarPlay and Android Auto. Its star feature is the ability to rewind up to ten different satellite radio stations that have been saved in the presets, a feature which banishes those just-missed-it-again moments to the dustbin of history. This is important on road trips, don’tcha know.

Nail the throttle and drivers are rewarded with prompt acceleration from the 175 horsepower turbocharged inline-four, displacing 1.6L and making 195 lb-ft of torque at just 1500rpm. Premium fuel is not required, by the way. These numbers, particularly the torque values, compare favorably with the Kona’s competition. Just be sure to avoid Eco mode, which can rival Buzz Killington for putting a damper on things. 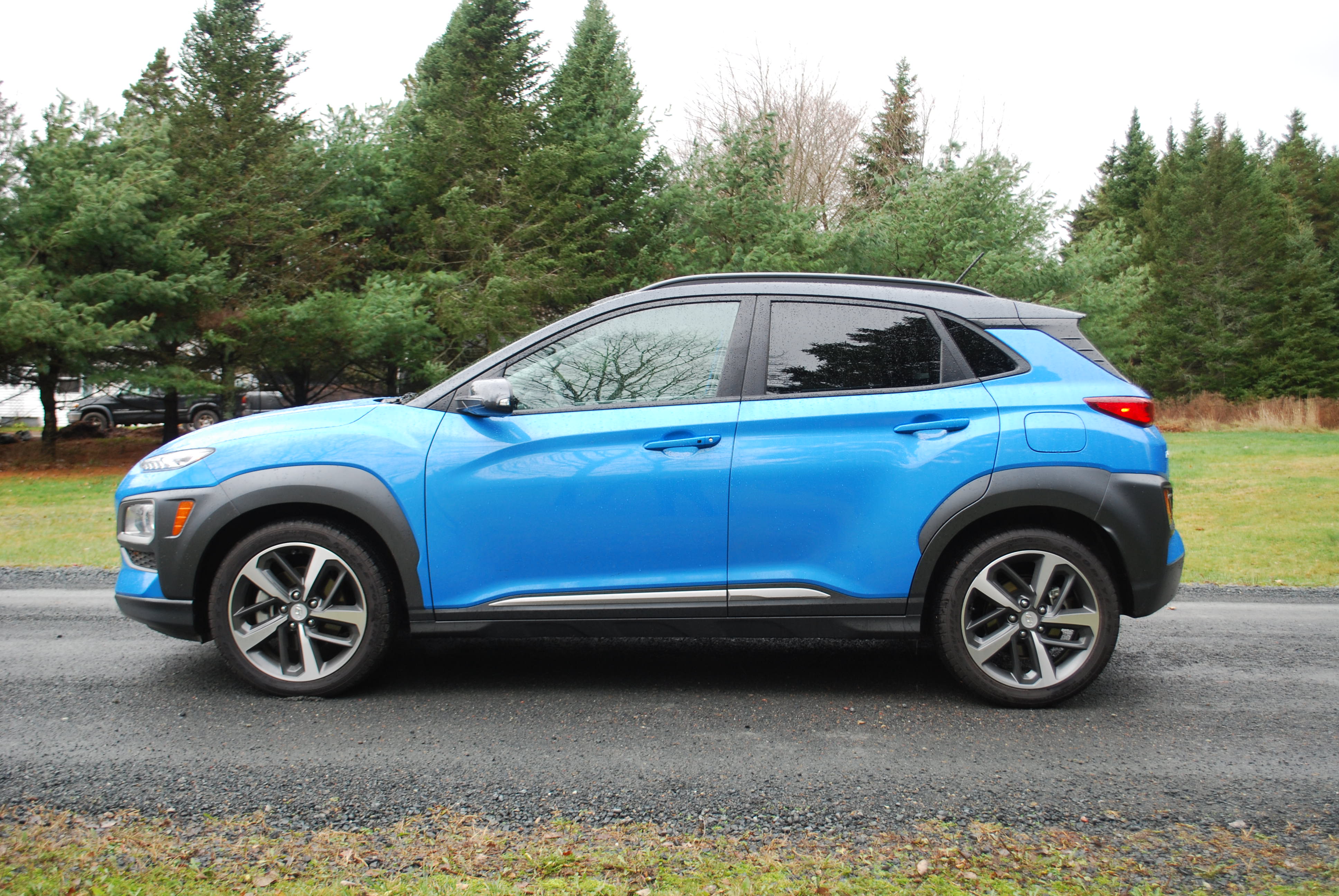 Speaking of buzz, the 1.6T emits a harsh engine note when prodded, producing a tinny growl upon acceleration. It goes away at higher speeds but is particularly noticeable when poking around town. Fortunately, the ultra-low torque peak moves the cute-ute around with a good shove. The gearbox, a seven-speed dual clutch unit, quietly goes about its business and remains largely unnoticed, save for an odd lag during a quick shift from reverse to drive, such as when backing out of a parking space.

Inside the Kona, shoppers will find a typically logical Hyundai interior, with a set of clear gauges ahead of the driver and a nicely integrated touchscreen for infotainment. Redundant buttons abound for the system, plus a brace of dials – one for volume, one for channel selection – bookending the screen. These dials have a notable flared leading edge, making them very easy to grab and leverage compared to other units on the market. It’s an example of thoughtful design that makes a difference.

One oddity is the inclusion of a head up display a neat party trick that is completely unnecessary. The plastic onto which the HUD is projected comes straight up out of the dashboard like a Halloween tombstone but only after its cover has slowly and noisily moved out of the way. It works but must’ve cost a fortune to engineer and manufacture. Hyundai could’ve spent those R&D dollars elsewhere in the car, reduced the sticker price a tad, or pocketed the difference for themselves.

There is plenty legroom in the front row of this mini-ute, even for this 6’6” human. Unlike many other vehicles of this size, my right knee was not in constant contact with the centre console, a comfortable trait worth noting. The houndstooth pattern on our tester’s seats may not be to everyone’s taste but it was very attractive to these jaundiced eyes. It certainly doesn’t look like a  low-priced entry to the small-crossover segment. 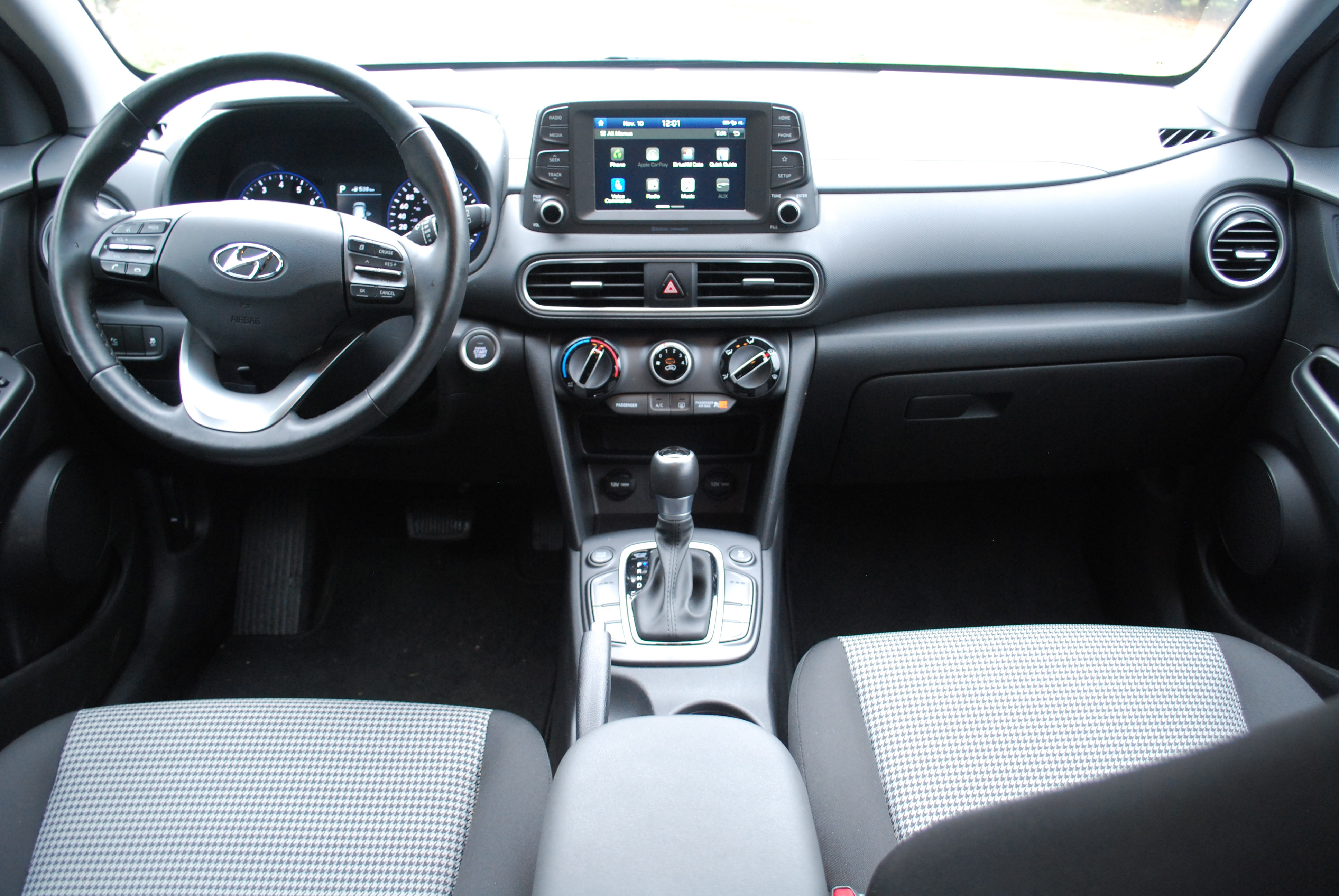 And small it certainly is. The Kona is a compact little rig, standing 1565mm tall with an overall exterior length of 4165mm. For comparison, the Mazda CX-3 is similar in height but 4275mm long. The Honda HR-V is even longer at 4295mm.

Still, the Kona doesn’t seem to suffer from its minimalist measurements, as evidenced by the space found in the front row and cargo area. Despite its funky looks, the Kona’s functionality has not been compromised, a complaint which can be leveled at the Mazda. The Hyundai’s rear seat does skimp on legroom, so make sure to take an extended test drive if youngsters in your family are aspiring NBA stars.

Unlike a few of its competitors, the Kona can be had in front- or all-wheel drive. The FWD machines are limited to the less powerful 2.0L engine and a couple of trims, while those selecting AWD can treat themselves to either the turbocharged 1.6L units or the Luxury trim with a base engine. Our tester was the cheaper of the two available AWD turbo models, priced at $26,899. 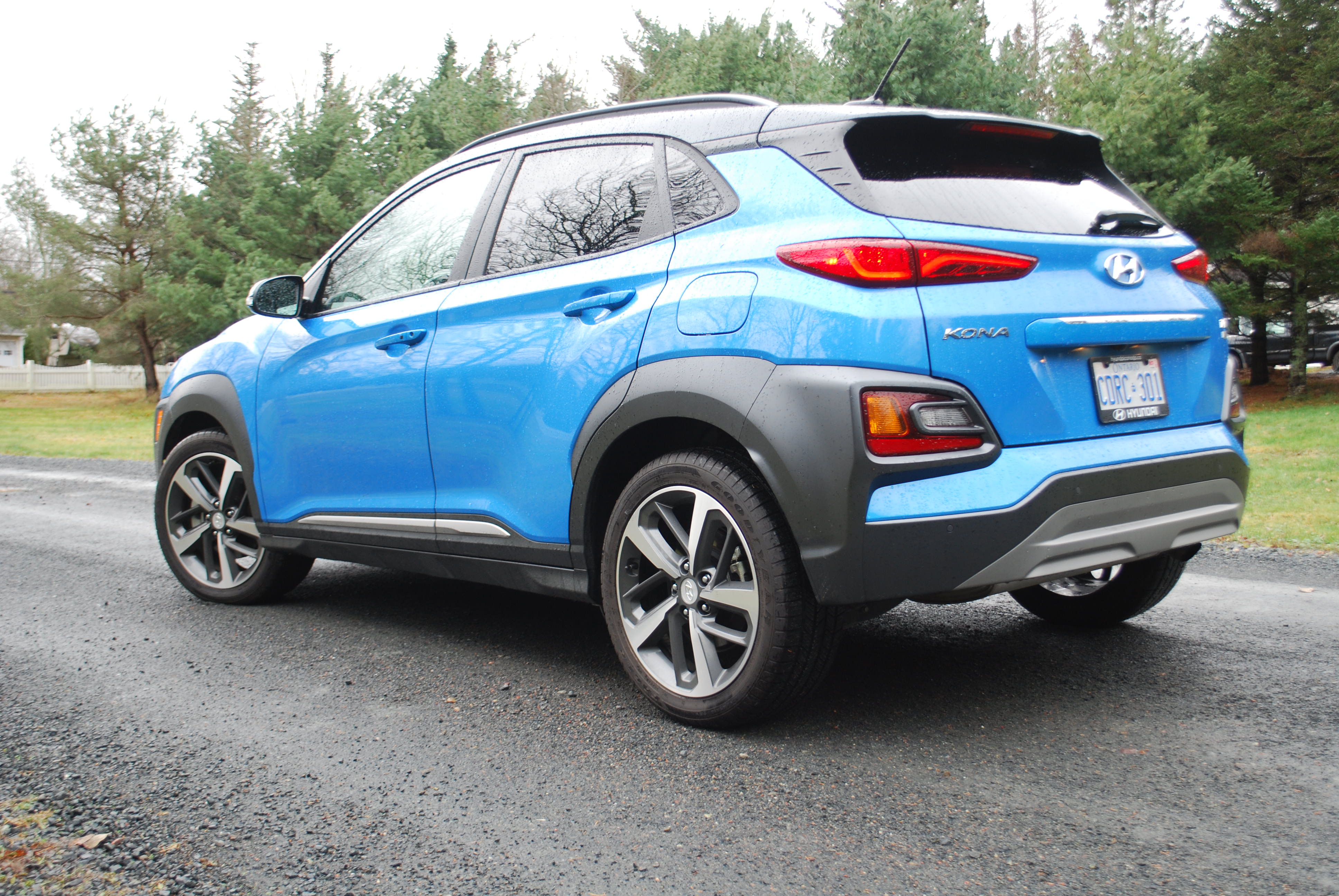 As is Hyundai’s M.O., there are no options with which to layer on top of the Kona, simply trims from which to choose. The least expensive of the AWD options, a 2.0L unit in Essential trim, checks in at just $22,999. That’s a remarkable and very cost-effective way to endow your family with the security of all-wheel drive (you’re still getting winter tires, though, right? [link]).

Back at the dairy bar, the kids have finished their ice cream cones and are clambering back aboard the Kona. They’re laughing at a Fortnite reference someone has made and the sun’s starting to peek around those gray clouds, making everything seem brighter. If the Kona and its funky style portend the future of tiny crossovers, that segment will get pretty bright, too. 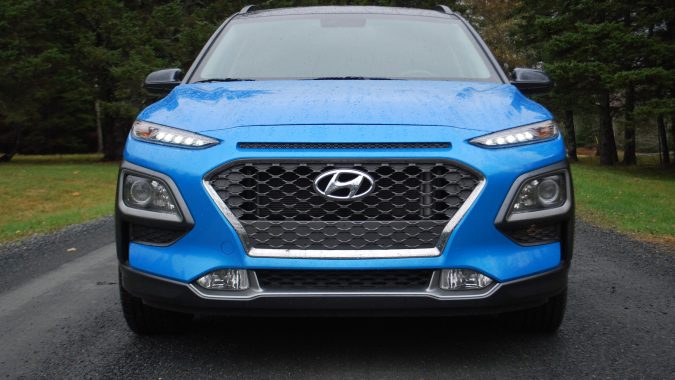 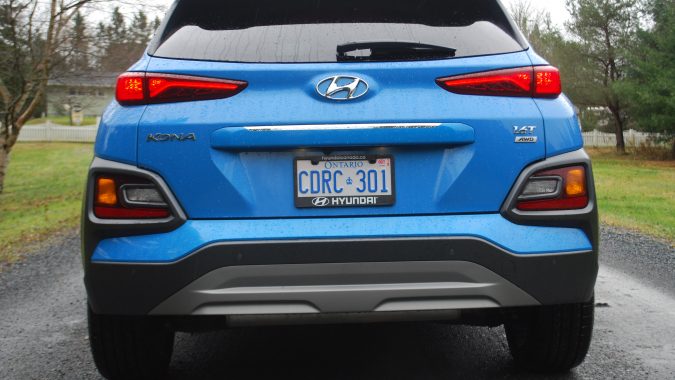 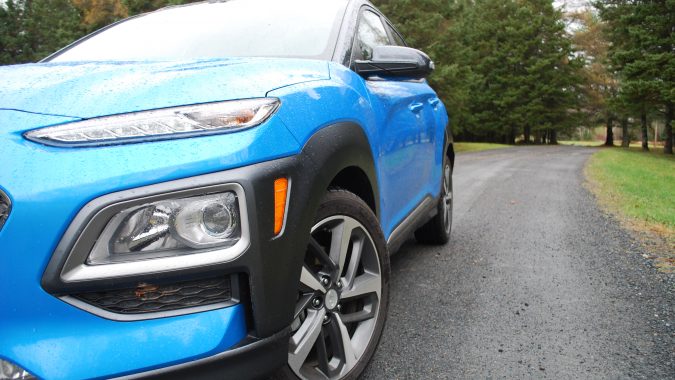 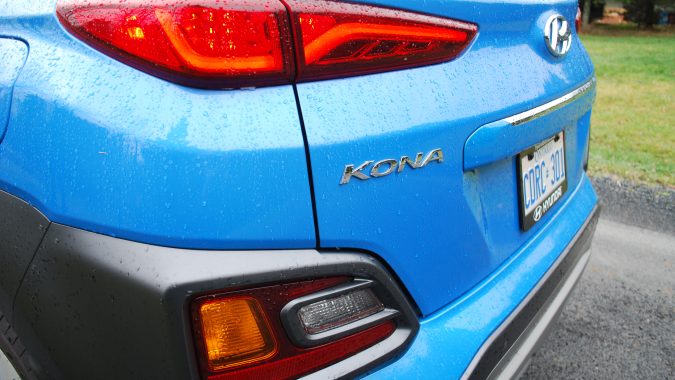 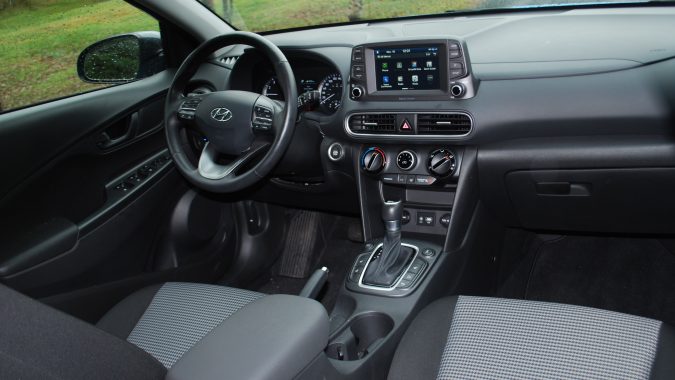 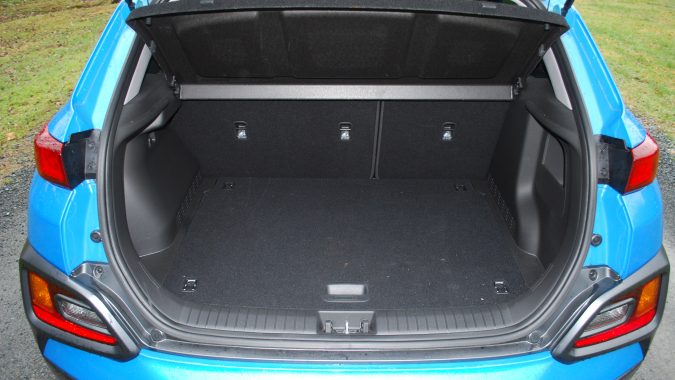 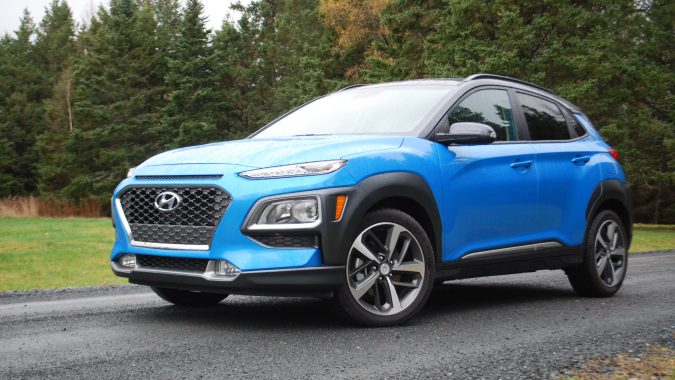 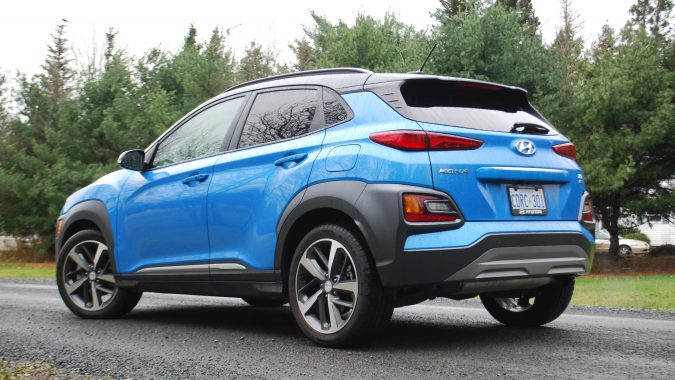 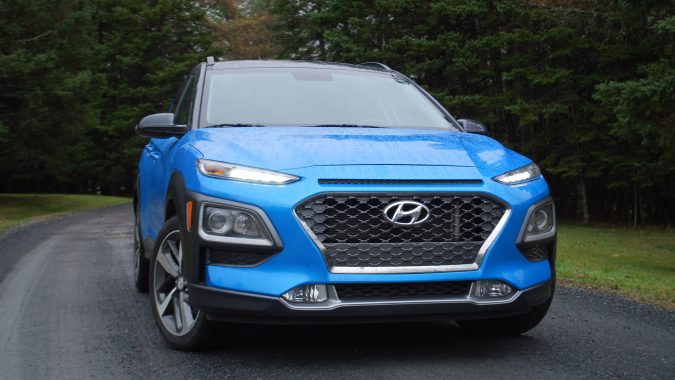 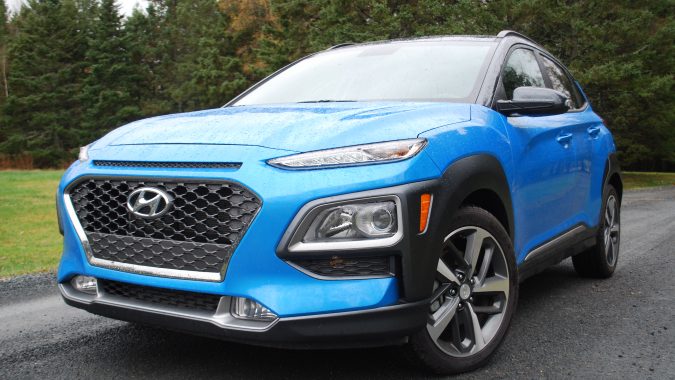 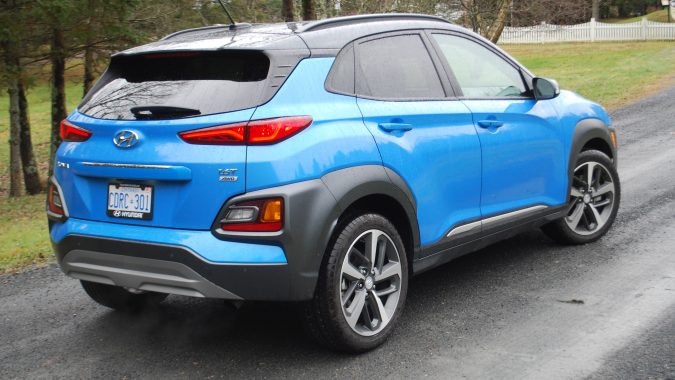 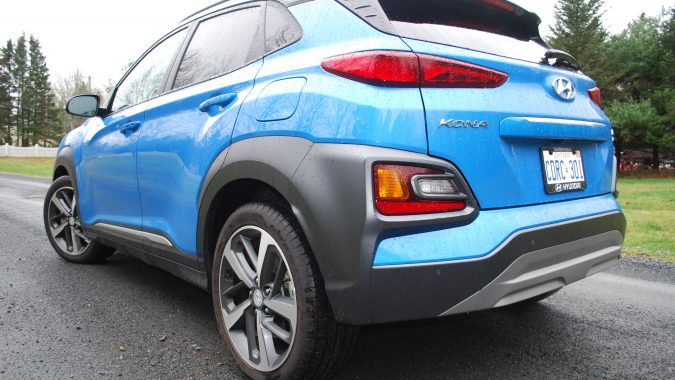