The one bright spot for sedans was compacts, which were up two per cent in 2017 vs. 2016, but compact SUVs were also up five per cent for the same period.

Hyundai’s own figures predict the subcompact utility segment to grow to an estimated 88,675 sales this year and no less than 128,239 in 2022.

So to attract attention, Hyundai has created five Kona trim levels with judicious attention paid to content in packages that start at $20,999 and top out at $31,199.

Instead of initials like GS and GL, each of the five Konas has a name — which is smart. 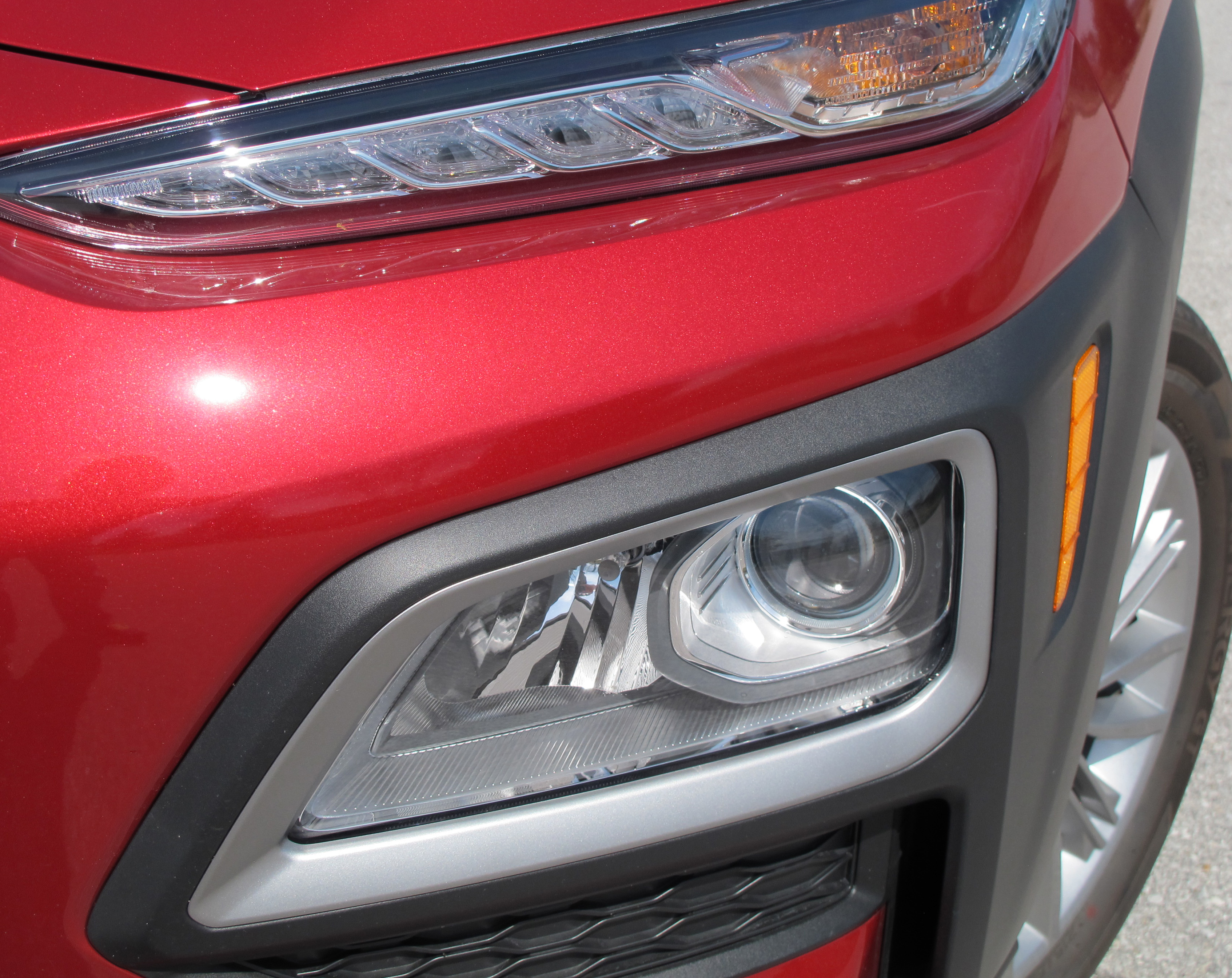 There are two engine choices, starting with a 2.0-litre direct injection, inline four-cylinder producing 174 hp and 132 lb/ft of torque with a six-speed automatic transmission, no manual being available.

The 2.0-litre Essential and Preferred are available in either front- or all-wheel-drive. The 2.0-litre Luxury, as tested here, is AWD only.

The other engine choice is the 1.6-litre turbo direct injection four-cylinder, making a much healthier 175 hp and 195 lb/ft of torque with a seven-speed dual clutch automatic transmission and standard all-wheel-drive. Again there is no manual transmission.

The styling is very much “urban SUV” with the body set high up on the wheels with thick, black plastic wheel well surrounds that not only give it a more aggressive look, but help mightily in controlling road salt rot.

The headlights as well as the rear backup/turn signal lights are set near bumper height instead of higher up which, to me, makes them vulnerable to parking lot damage.

The interior is contemporary with some hard, black plastic but the payoff is cargo and passenger volume of 3,208 litres, which would make this a compact in my books, not a subcompact.

The 2.0-litre in the Luxury AWD as tested has three automatic transmission drive modes – Normal, Eco and Sport. It also boasts a button to activate the downhill descent control and a lock button for the AWD.

At 132 lb/ft of torque, the 2.0-litre uses the Atkinson Cycle, which is designed for fuel efficiency not performance, resulting in adequate power for most circumstances but has its work cut out for itself on long uphill climbs.

On a more than 300 km jaunt through the back roads and some 400-Series highways in Ontario, I left it in Normal, which is the default mode when the car is started.

I can’t compare it to a Kona with the turbo, but I know the engine and its 195 lb/ft of torque makes it a better option for those who will be filling up their Kona with people and cargo. 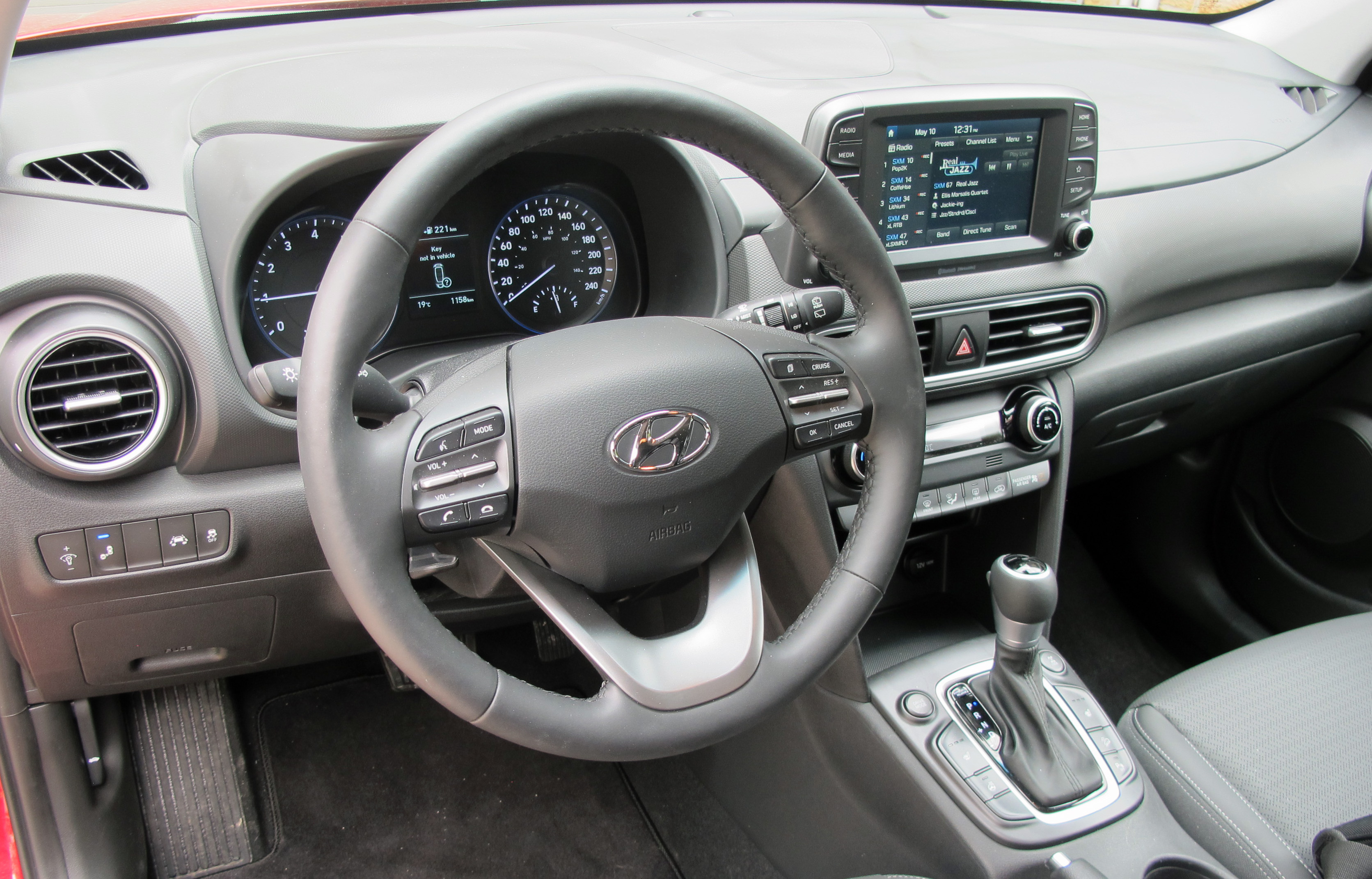 Sight lines from the driver’s seat are clear, but what stood out on the highway was lack of wind buffeting and noise, despite my tester having roof rails fitted.

The Kona Luxury came with a number of thoughtful details, one of which was the cubbie at the front of the centre console with two power points, one USB port and one auxiliary jack and a nifty little shelf to store your cellphone just above it. Available on the toptrim Ultimate is the same setup, but with a segment first wireless charger and charge indicator.

Another smart feature is under the cargo floor there is a shallow, sectioned storage tray, which also lifts to expose the spare tire instead of inflator kits some other manufacturers try to palm off.

And I liked the tie downs with cargo net, perfect for oddments such as a bag of groceries, instead of tossing them in the back seat where they would roll around.

All and all the Kona is a well thought-out package that brings together what buyers want in a subcompact crossover. 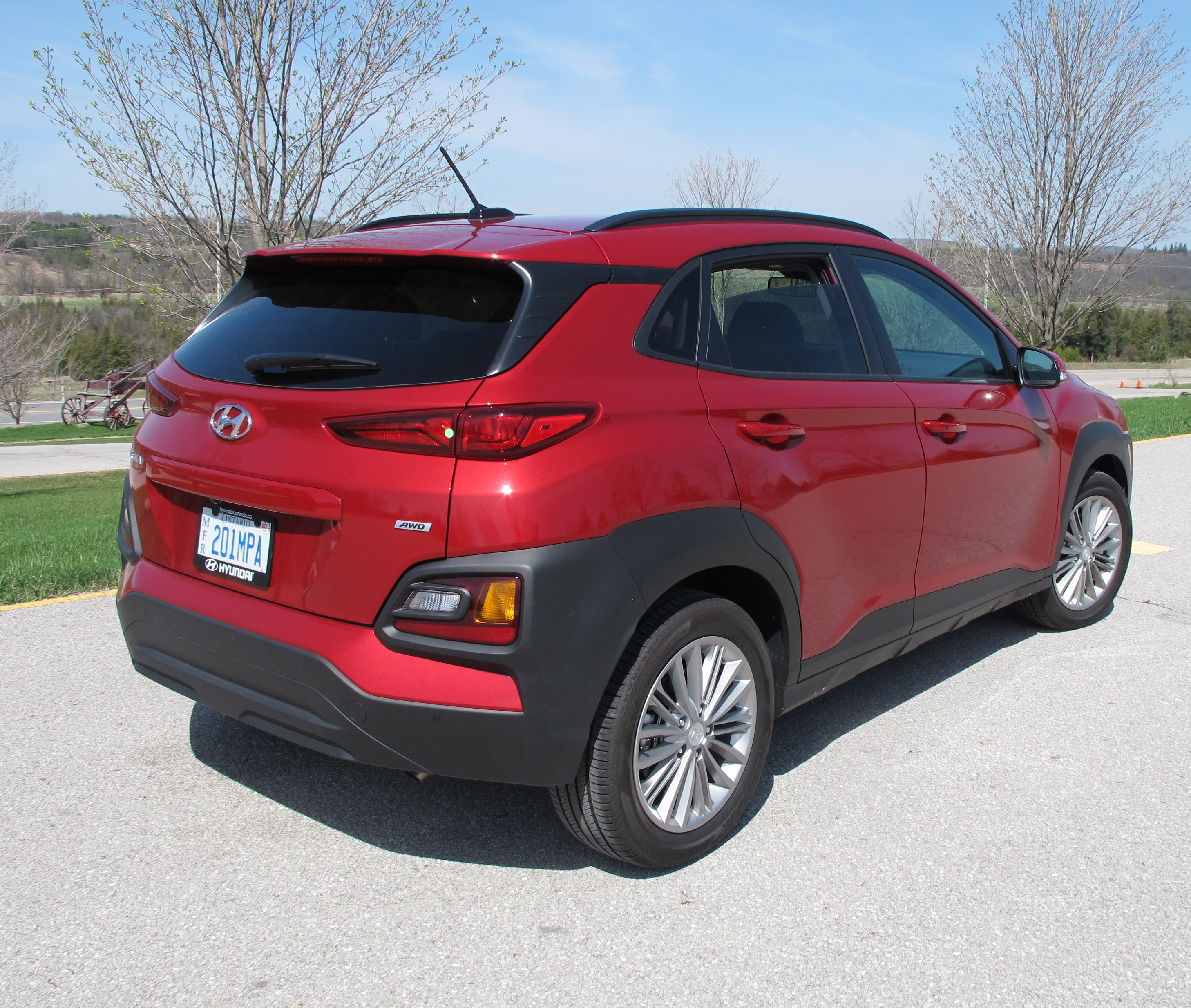 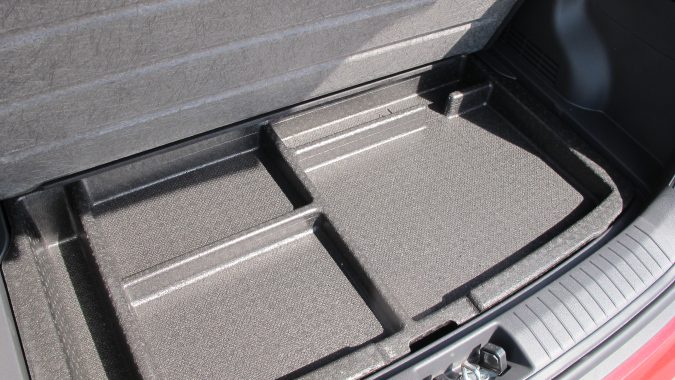 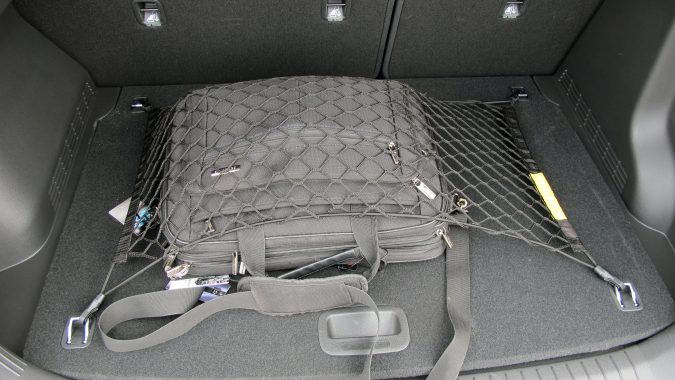 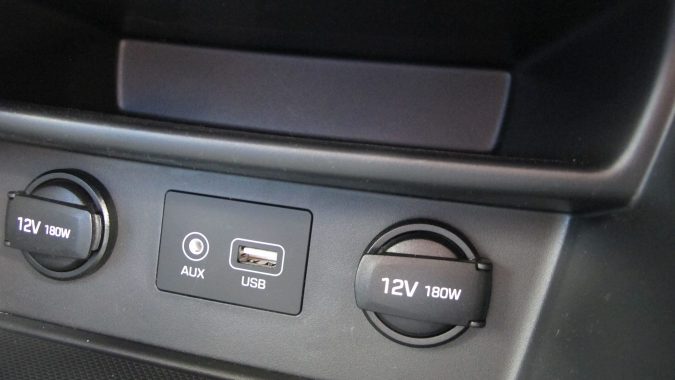 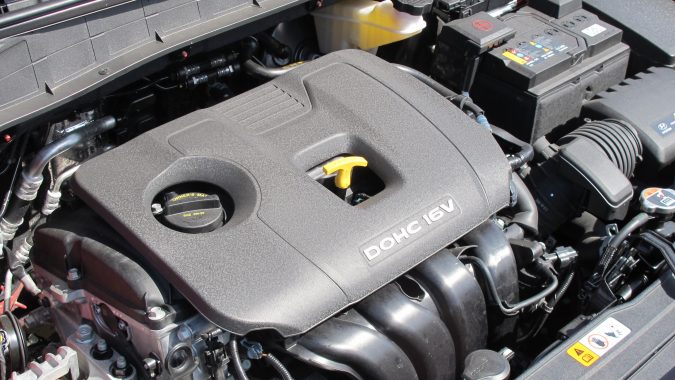 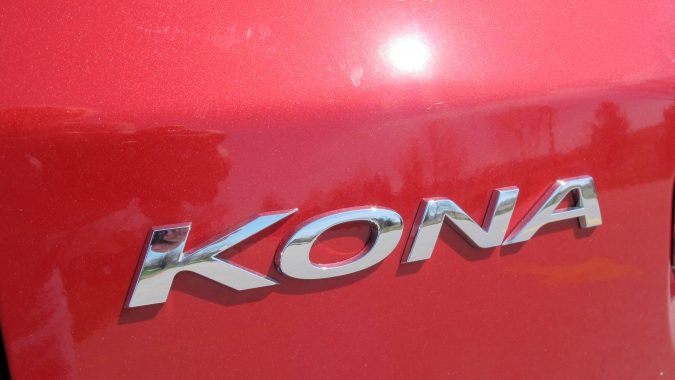 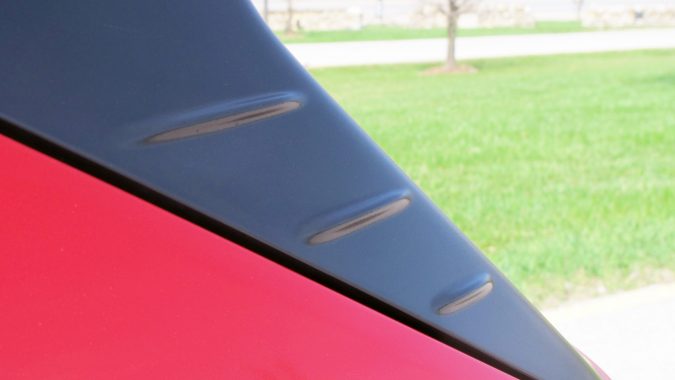 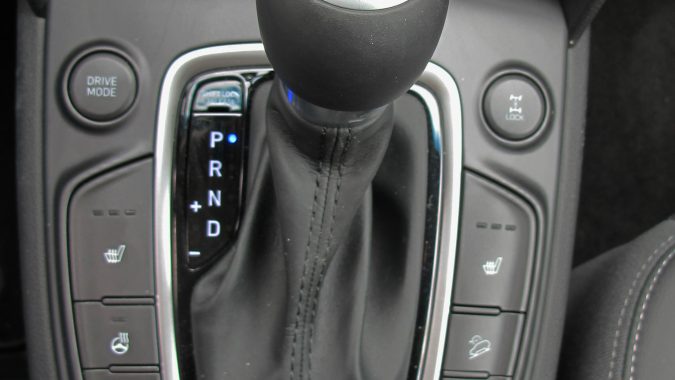