The Explorer name has been around since the very early ‘90s and can be credited with the mainstream acceptance of the SUV/crossover as a family vehicle.

Ford grabbed a lot of headlines earlier this year with the news they’re getting out of the car business. Not exiting the automobile business, mind you, but rather ceding the lower-profit sedan and small-car game to other manufacturers. This is in an apparent effort to redouble its efforts in the truck and SUV markets. Customers, according to Ford, are making a permanent and irreversible shift to those types of machines.

The Explorer name has been around since the very early ‘90s and can be credited with the mainstream acceptance of the SUV/crossover as a family vehicle. If you want to pinpoint the moment Joe Q. Public decided it would be okay to ferry the brood around in a tall wagon with four-wheel drive (just in case!), look no further than the original Explorer.

That was in 1991. Twenty-seven years later, the Ford Explorer has grown several sizes, not unlike the selection at your favourite buffet or the Grinch’s heart. Stretching xxx.xx inches and weighing in at 2465kg, this 2018 Explorer Sport would’ve given the Chevy Blazer a run for its money in the size department all those years ago.

Today, the unibody Explorer competes in the three-row segment of machines that are imbued with slightly more off-road cred than their mundane brethren. Even though the Explorer is aging (we will likely see a new Explorer at the next Detroit Auto Show), Ford engineers have baked enough goodies into it that set it apart from its competition.

Under the hood of the Explorer Sport is Ford’s 3.5L EcoBoost twin-turbo V6, good for 365 horsepower. For reasons that elude your author, it emits a roar from its quad exhaust pipes not unlike that of Ford’s own high-performance Raptor pickup truck. Whether this is accomplished via audio speaker trickery or a sound tube routing the rumble into the passenger compartment matters not one whit. It is a good racket that sounds fantastically burly at wide-open whack. Introverts need not apply.

There is no shortage of grunt, as the twin-turbos spin this 2465 kilogram Explorer up to speed without hesitation. The transmission always seems to be in the right gear, a compliment that cannot be levelled at some other machines in Ford’s portfolio. Those with professional testing equipment report a 0-100km/h run in the low six second range. It feels faster than that. Must be the exhaust note. 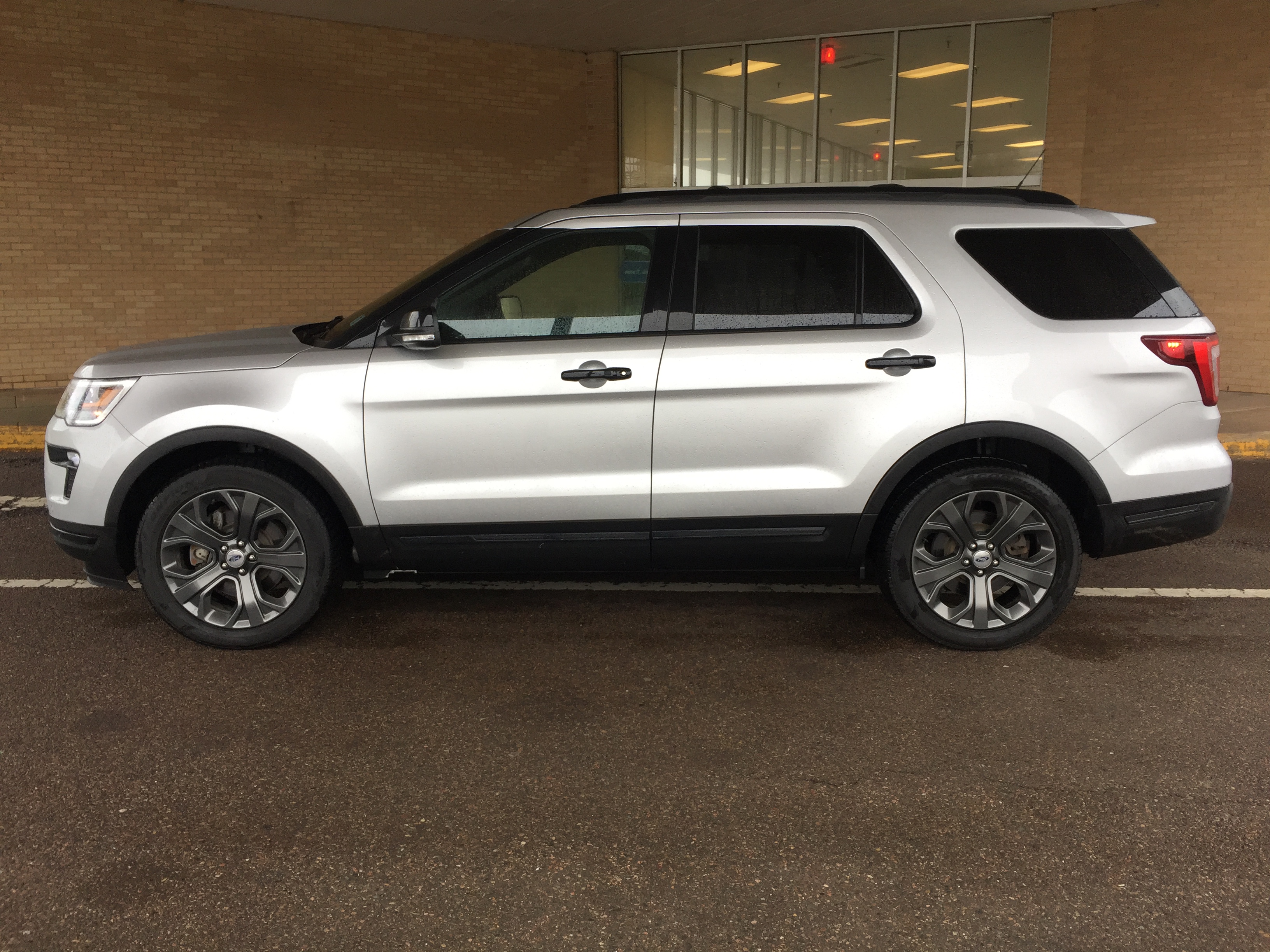 Power folding rear seats are an excellent touch, besting its competitors who force their owners to suffer the indignity of reaching awkwardly in the cargo area while juggling three toddlers and a bag of groceries. Most of the interior feels upscale – good enough for a Lincoln, really – with soft materials in all the right places. An upgrade of the steering wheel’s leather wouldn’t go astray, though.

Storage abounds, as you’d expect in a SUV, with its packaging comparing favorably with the Jeep Grand Cherokee and Nissan Pathfinder. A lone misstep is the cover on a forward console bin which rises up with velvety action but then obstructs the climate controls, particularly ones for the fan speed. A retractable cover would be a better choice here. An enormous glove box with plenty of storage resides ahead of the front passenger. Silver dashboard trim with the word ‘Explorer’ hammered into it lowers along with the lid, a well-crafted surprise that contributes to it commodiousness.

Located on the centre console is a knob that, when twirled, imbues the Explorer with different traction settings for varying off-road calamities. It apes a Land Rover in this regard and is a nice party trick in an effort to stand out among the mass of three row crossovers currently crowding the marketplace.

And this is a crossover, make no mistake. It is not the Explorer of old that was rear-wheel drive and based on a truck chassis. Its platform architecture, called D4 internally at Ford, often cannot make up its mind if it’s trying to be a car or SUV. One advantage of this setup is a ride-height that allows passengers to slide into the Explorer without much bending and certainly very little jumping. 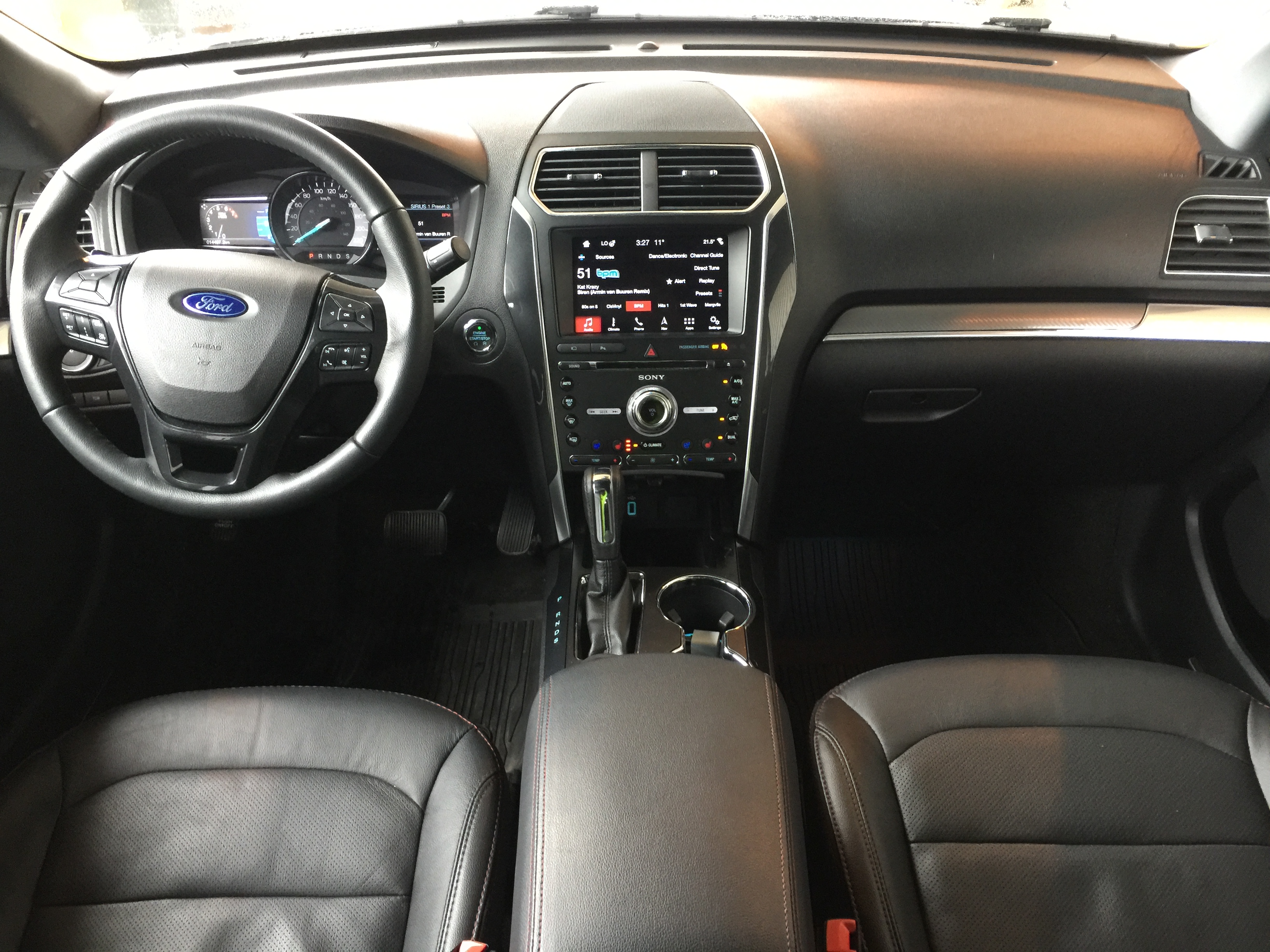 The 2018 Explorer Sport is not a cheap vehicle, with a starting price of $54,199 before options. Big ticket items include 20-inch wheels costing $650, plus another $500 for second-row bucket seats. Opting only for the second-row captain’s chairs will keep the Ford priced under $55,000 and allow voluminous access to the third-row bench. This test vehicle was also equipped with rear-seat DVD screens and an expansive glass roof.

Our buying advice? Skip the $1750 twin-panel moonroof and $2100 rear-seat entertainment system. The vast expanse of glass tends to freeze occupants on winter days and broil them in the summer, so it’s best to stick with the steel hat. As for the rear-seat entertainment system, well, it isn’t very entertaining. Its screen resolution is on par only with a Commodore 64, while the interface is completely obtuse. Don’t just take this old-timer’s word for it; a cadre of young’uns who seemingly exit the womb with advanced degrees in electronics couldn’t figure it out either. Save your cash and buy a few iPads for the rugrats instead.

With Land Rover-esque terrain settings and – in silver paint, at least – more than a whiff of cop car, the 2018 Ford Explorer Sport acquits itself well as more than just another three-row SUV with which to ferry the brood. No, it isn’t primed for the Rubicon but its off-road overtures do ensure it doesn’t besmirch its nameplate origins, perfect for outdoorsy families.

No cars? Perhaps Ford is onto something after all. 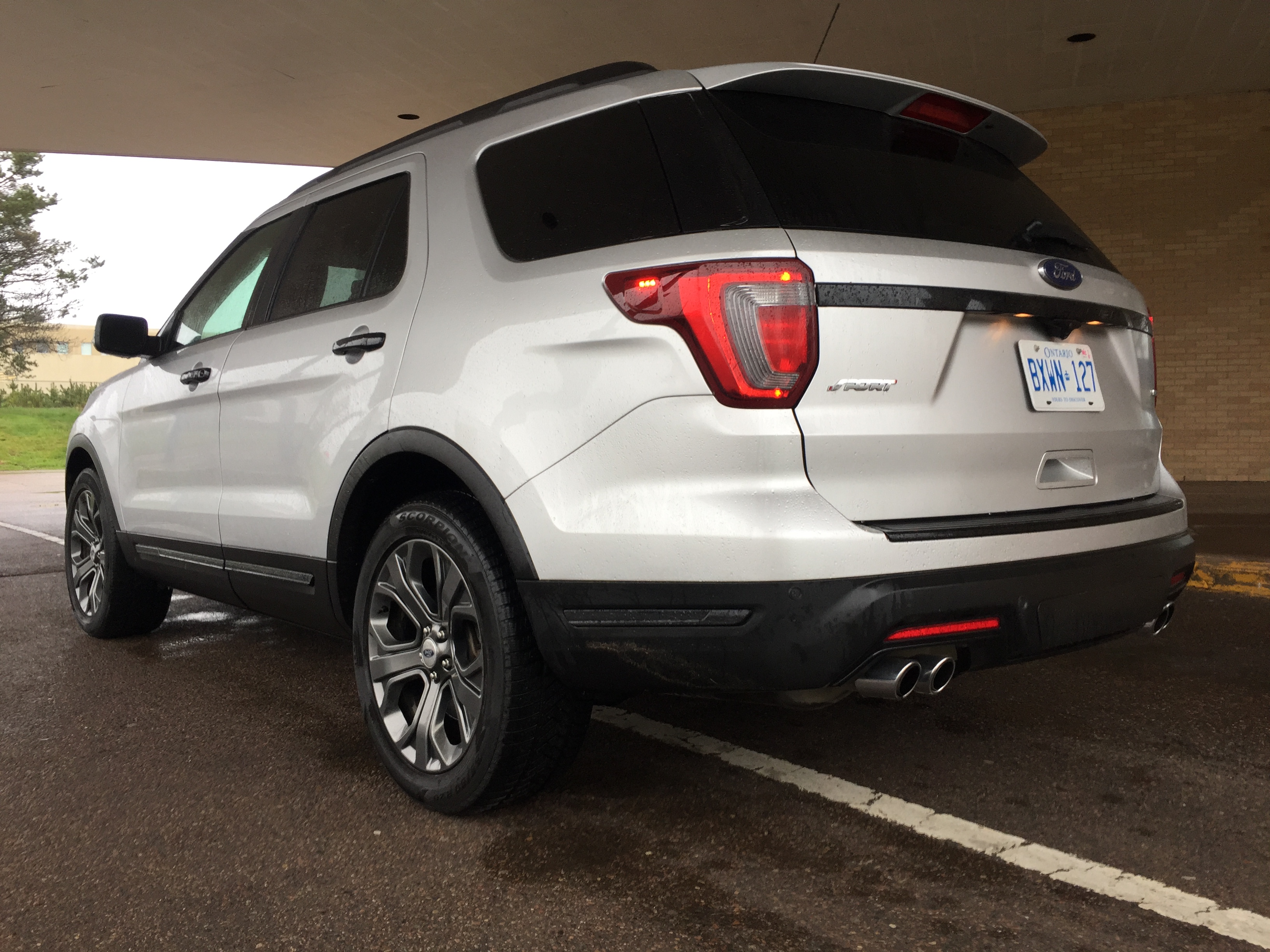 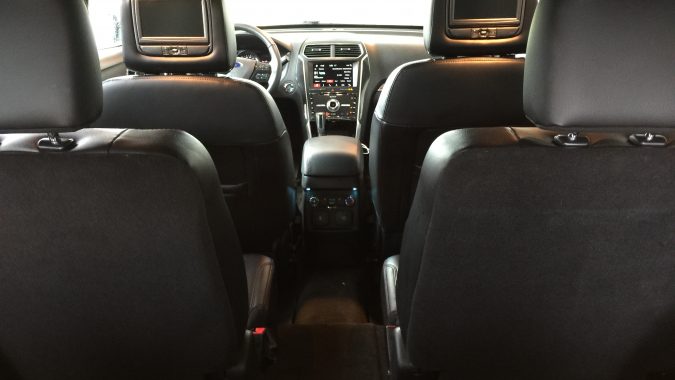 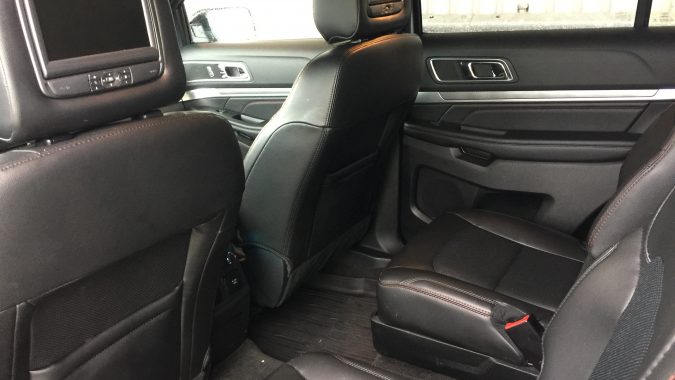 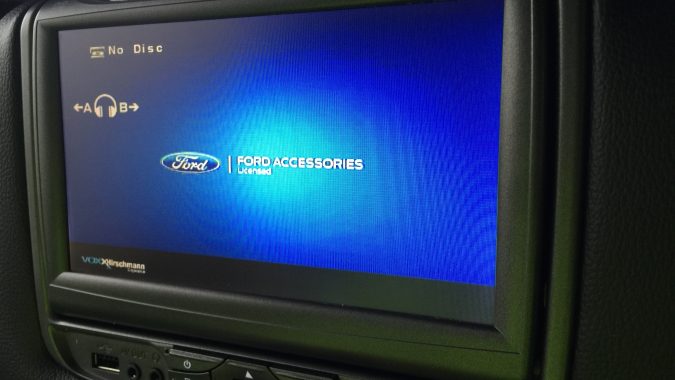 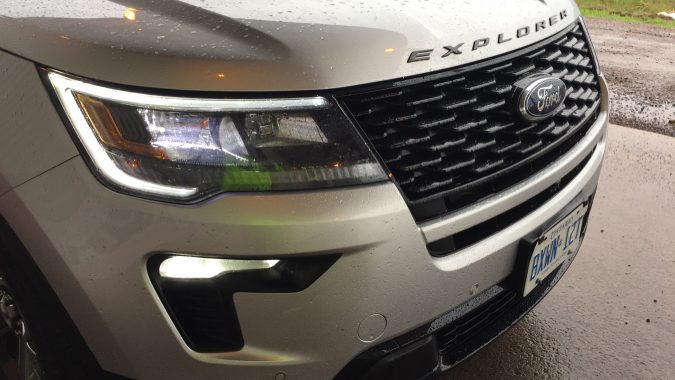 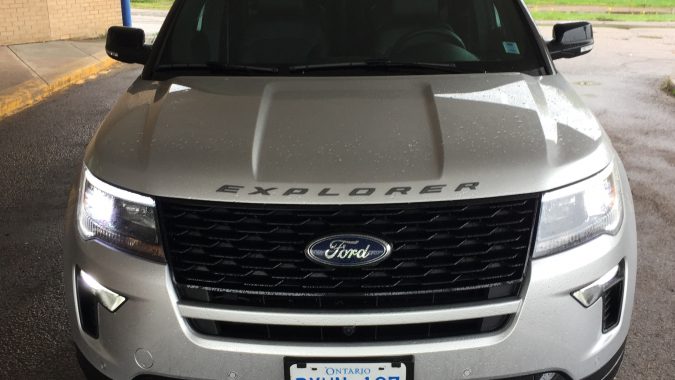 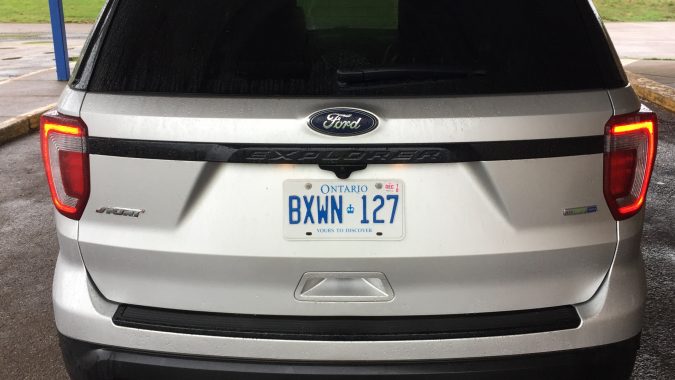 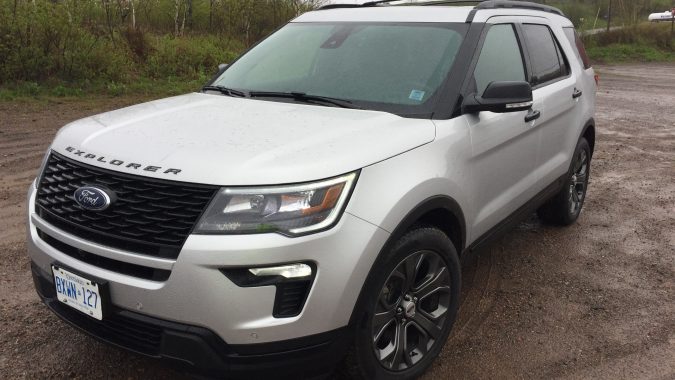 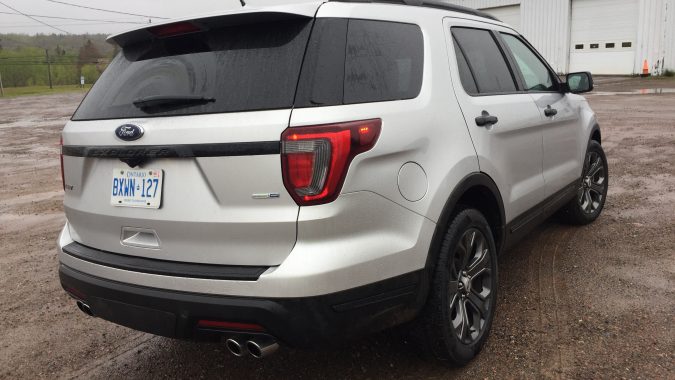