Automotive history is littered with examples of car companies plucking a beloved nameplate from its past only to slap it on an undeserving machine. Look no further than the woeful 1988 Pontiac LeMans for proof.

The ZR2 trim appeared at GM in 1994 as a regular production option on the S-10 and Sonoma pickups, expanding two years later to its Blazer cousin before quietly disappearing in 2005. Bringing beefy off-road suspension parts and off-road goodies to the party, these ZR2s are still spoken of in quiet reverence by their fans.

Chevy reintroduced the ZR2 on its Colorado line of mid-sized pickups last year. Far more than a simple paint & stickers package, we’re glad to say this ZR2 is well-deserving of its name. Beefy 31-inch Goodyear Wrangler Duratrac wrap model-specific 17-inch aluminum wheels which, along with unique hubs, widen the front and rear track widths by 3.5 inches over a standard Colorado. This gives the truck a fantastically mean stance. The suspension has been jacked 2 inches skyward and a pair of locking differentials have been installed.

The ZR2’s key off-road party trick is its deployment of Multimatic Dynamic Suspensions Spool Valve damper technology. That’s a mouthful, but your main takeaway should be that Multimatic is a Canadian company, tasked with building the Ford GT and parts for F1 racecars. It’s more than fair to say they are not a low-cost supplier. These DSSV dampers replace traditional piston and shim setups found in most shocks with a pair of spool valves, which are units used to control fluid in hydraulic systems. This tech has been around for ages but has only recently been deployed in automobile dampers. 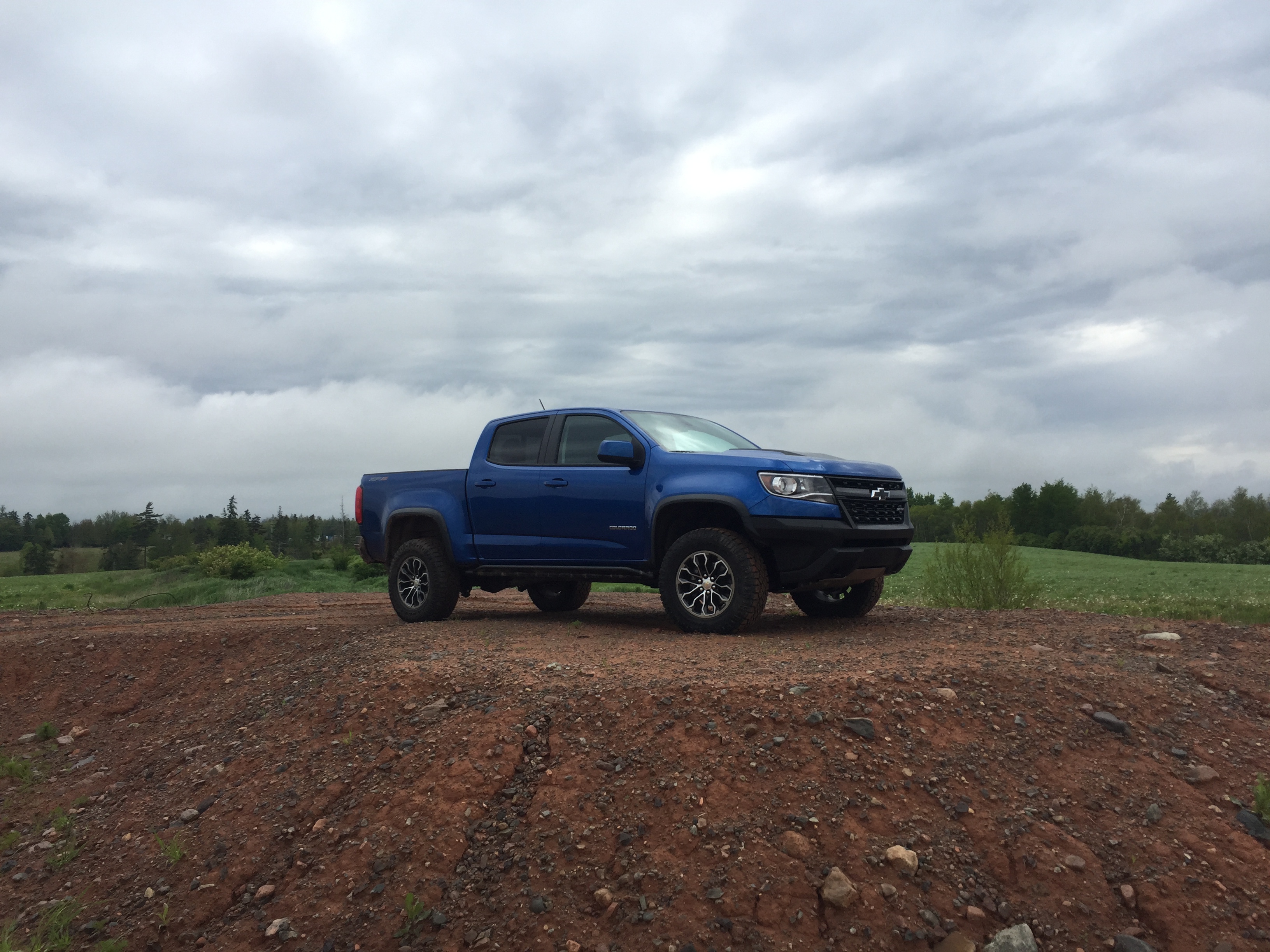 This explains the presence of gold-coloured bling at all four corners on the ZR2. What you’re seeing is extra real estate for shock fluid, allowing the movement of those spool valves. This puts the normal on-road operating range into a separate chamber in the middle of the damper. Another spool valve resides on the shaft in the main body of the damper, tasked with handling extreme compression events such as those that occur during gnarly off road maneuvers.

The chamber furthest outboard on the damper is a reservoir full of nitrogen. Compared to the shocks on a Ford Raptor, which are tasked with managing all aspects of gonzo off-road action and on-pavement civility, the ZR2’s dampers are essentially (and expensively) designed to provide the best of both worlds.

It really works. Despite repeated attempts to spend my entire week with the ZR2 in gnarly off-road environs, the inevitable mundane errands forced me to take the truck on pavement. Here, the DSSV dampers showed their merit, providing a smooth ride not generally found in a pickup, particularly one with strong off-road chops. Chevy’s decision to deploy these expensive suspension components has paid dividends.

To sample its devilish dirt dexterity, I headed for a well-known playground through the wooded Nova Scotia hills. With all the electronic nannies turned on, the ZR2 treated me with kid gloves, reining in the power and dousing any attempt at lurid powerslides. 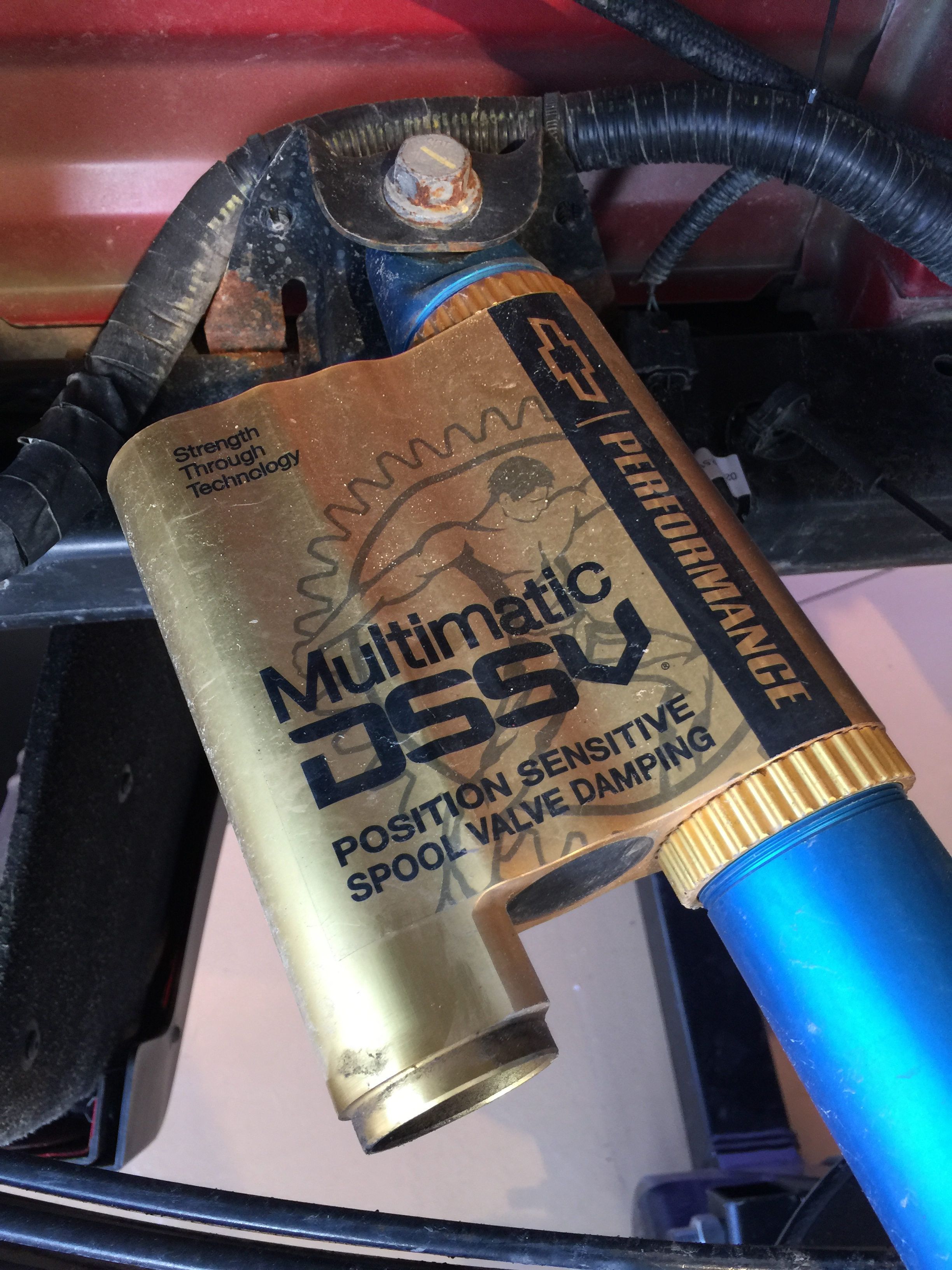 A quick punch of the “Off-Road Mode” button – and you had better punch it, as this is not a truck in which to ‘touch’ or ‘press’ buttons – alters the throttle progression and changes the 8-speed’s shift calibrations. This mode pokes the 308hp V6, slightly sharpening its reflexes and making it more responsive to demands for more power. A long jab of the traction control button backs off that system and permits the truck to perform tail-out heroics while allowing only the most ham-fisted of drivers to get into trouble. Think of it as a three-step nanny system: on, partly off, and mostly off.

The DSSV dampers proved their worth, landing airborne jumps with a surprising pillow-like thwomp and failing to shake loose any of your author’s tooth fillings. Slowing it down over a rocky path, the ZR2 showed off its ground clearance. In fact, viewed from the front, the ZR2 appears to be made solely of Goodyear Wrangler Duratrac tires, as the development team hacked off the standard Colorado’s lower front fascia to expose nearly the entire front tread to terra firma. This allows for a 30-degree approach angle, the same as a Ford Raptor. A new Wrangler Rubicon, it must be noted, has a 43.9-degree approach angle.

Shifting to four-low and locking both the front and rear diffs, the ZR2 used its ten inches of rear suspension travel to traverse its way up and down a rocky incline. It was easy to modulate the throttle, as the truck’s off-road systems allow just the right amount of slip. Sightlines were clear and it was easy to place all four tires. The addition of an around-view camera system would be welcome. 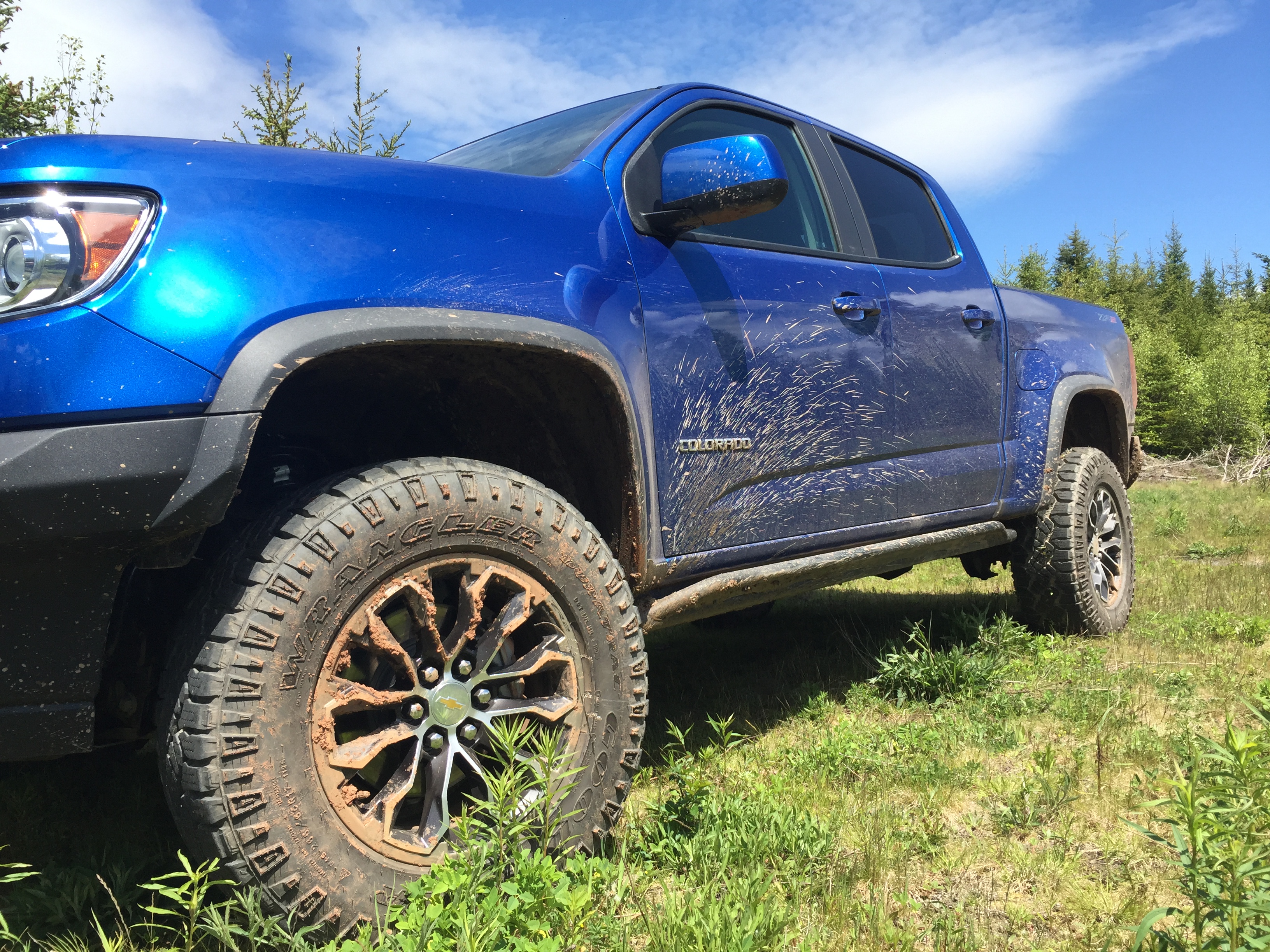 In Canada, the ZR2 Crew Cab sticker price starts at $46,260 before the inevitable $1795 destination fee. Our tested was optioned to the gunwales with items like a Bose sound system and a so-called Premium Interior package. The latter simply brings beefy floor mats along with mood lighting and is wholly unnecessary. Its $495 Kinetic Blue paint looked natty but the $0 Red Hot hue is equally compelling. Stick with the basics if you’re shopping for a ZR2.

In fact, go ahead and save yourself an extra $1400 and opt for the Extended Cab configuration. Despite having four forward swinging doors, the Crew Cab’s rear bench is habitable only by those very short of leg and completely devoid of feet. This will quickly relegate the aft compartment to storage duty, a task ably performed by the Extended Cab model. One will also enjoy a longer and more usable cargo bed.

The ZR2’s interior is largely a carbon copy of the standard-issue Colorado, with the exception of ZR2-specific rocker switches for the front and rear lockers, plus a secondary function on the four-wheel drive knob for Off Road Mode. The front thrones are a comfortable place, encouraging drivers to splay their feet and tune the satellite radio to Prime Country.

Chevy made the right call to produce the ZR2. It takes the off-road ethos further than its mid-size pickup competitors, some of whom wantonly insert the word ‘Pro’ into their names despite wearing workaday clothing and not approaching even a fraction of the ZR2’s off-road capability.

This is definitely a case when a name from the past earns its keep. 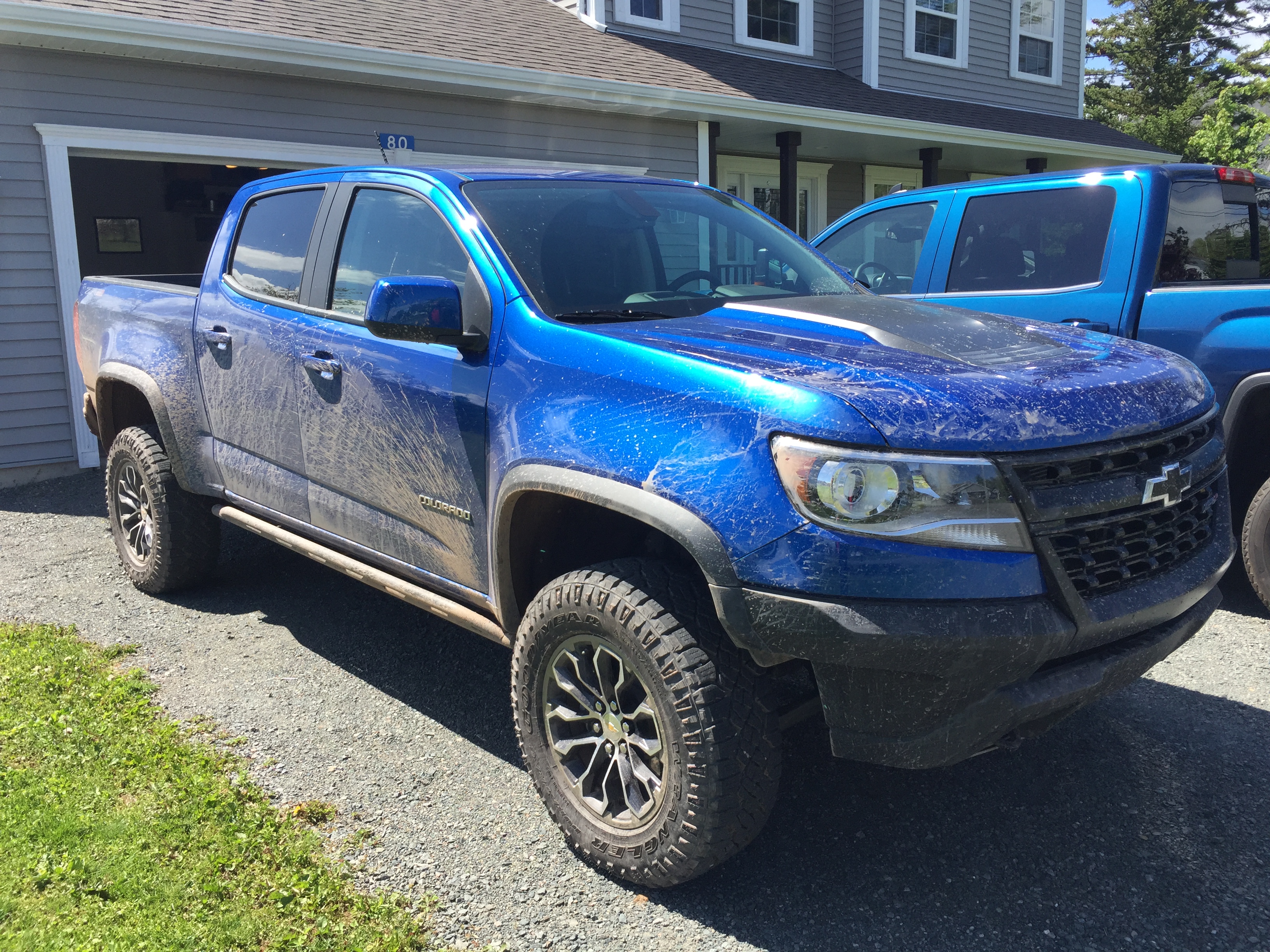 Down and Dirty in the Ram Power Wagon 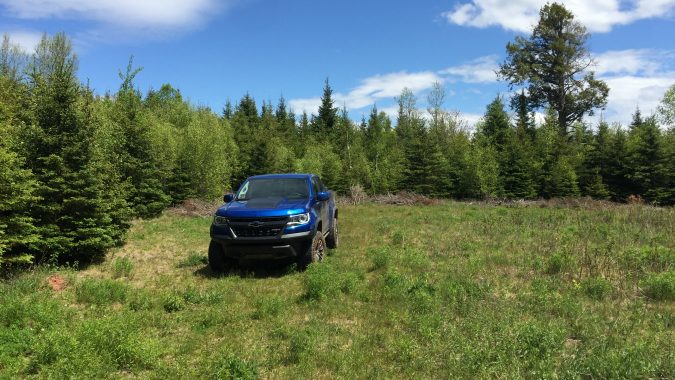 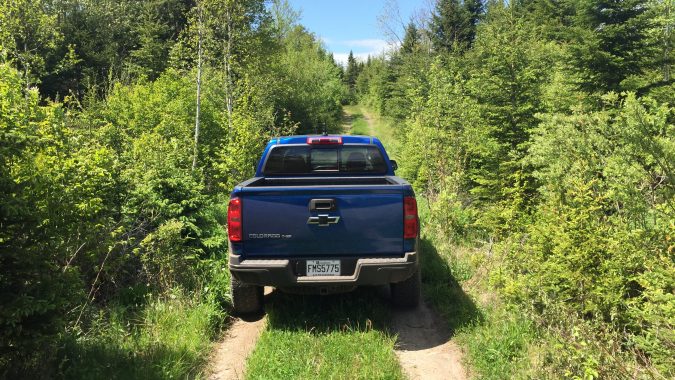 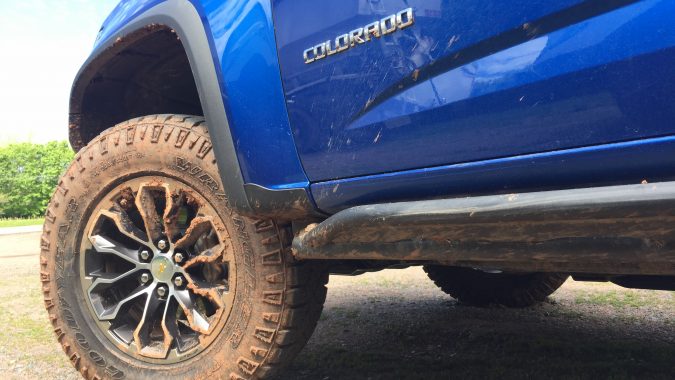 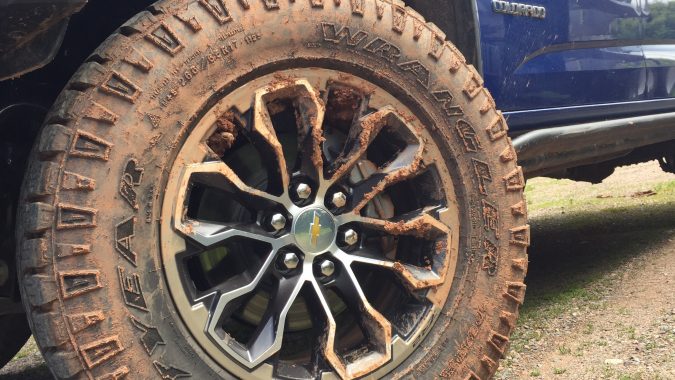 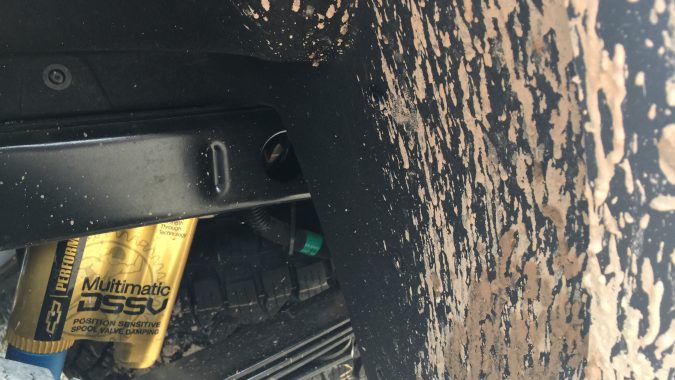 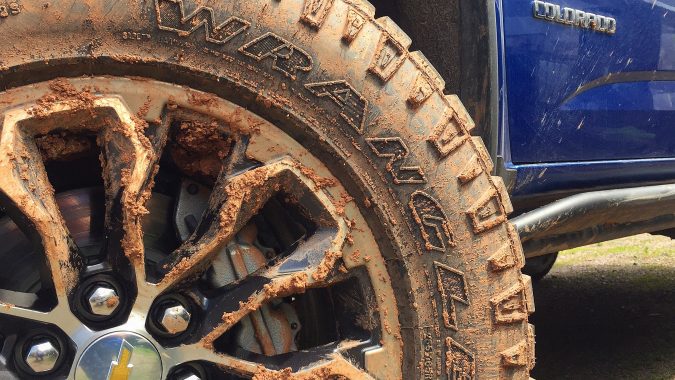 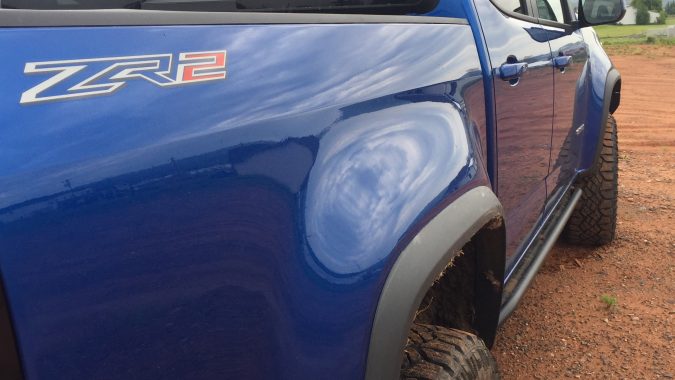 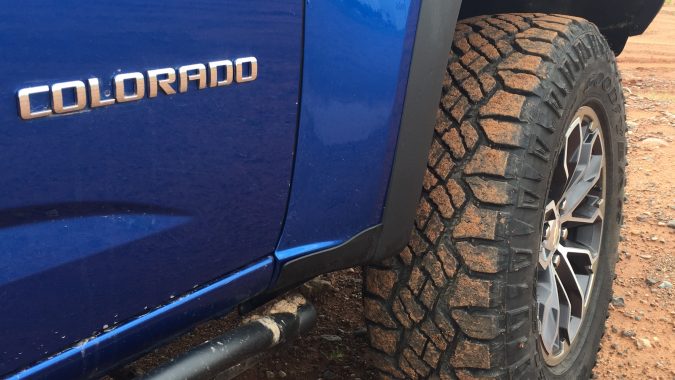 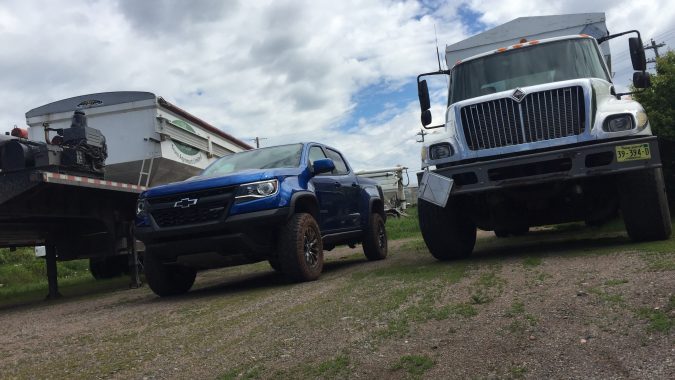 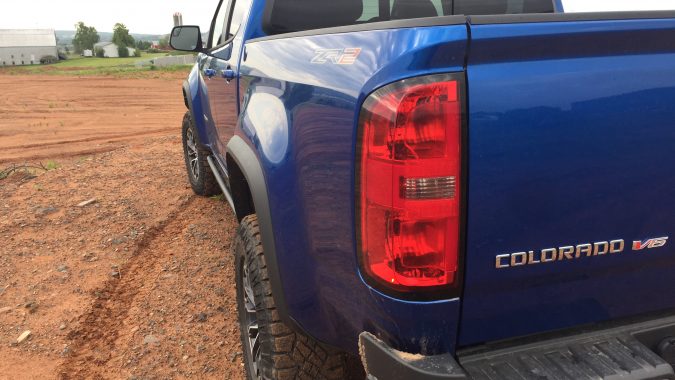 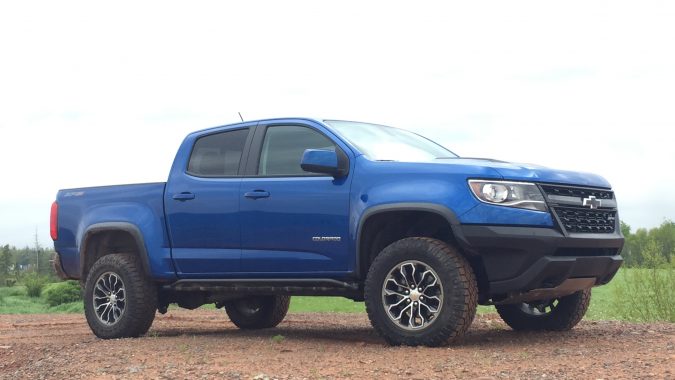 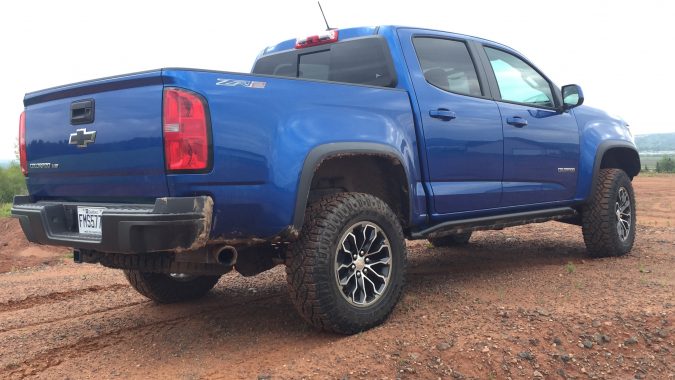 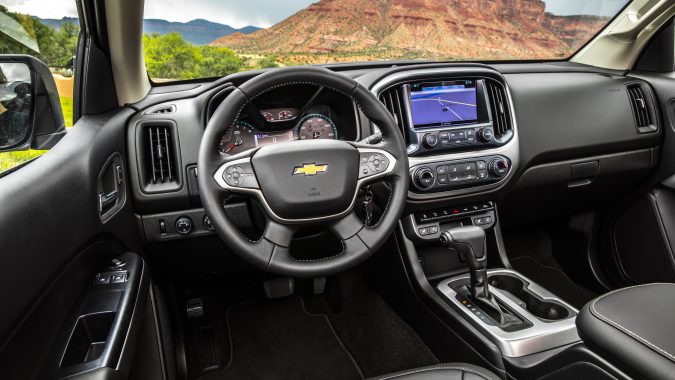 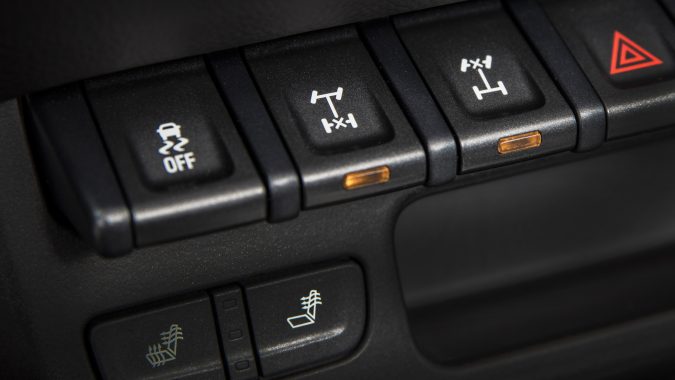 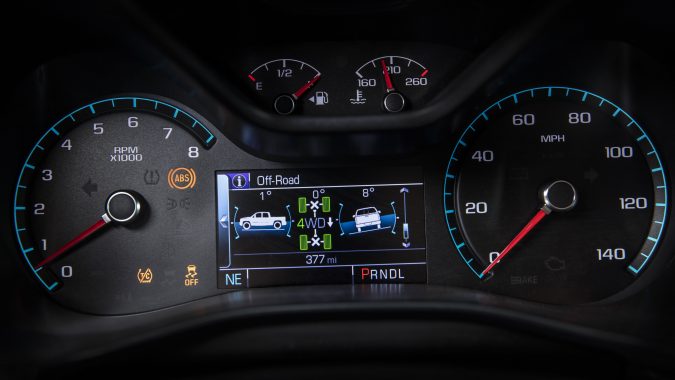 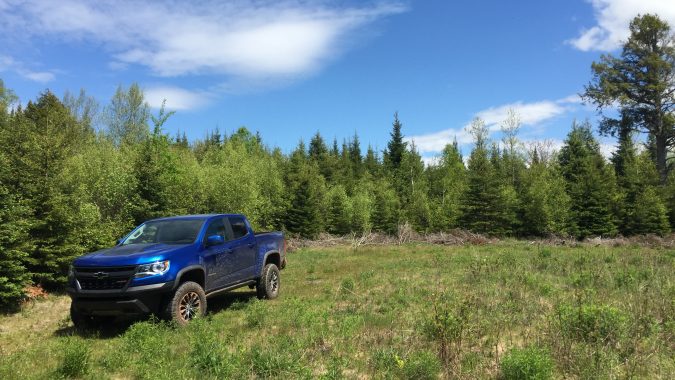