VICTORIA, B.C. – You don’t have to go far to find the more remote parts of Vancouver Island.

Our weapon of choice for this venue was the 2016 Honda Africa Twin, a legend reborn in modern form.

We lined up on a log-sorting paved pad, a gaggle of motor journalists dressed in new KLIM adventure suits, a hodgepodge of expertise and ignorance, with proficient off-roaders, pro sportbike racers and others, like me, just simple street riders.

Canada’s premier off-road instructor, Clinton Smout, tried not to look askance at occasional street boots and full-face helmets, in lack of proper footgear, motocross lids and goggles, before motioning us toward our mounts.

Honda had brought other bikes boasting a mix of on-road/off-road pedigrees – the dual purpose CRF250L and XR650L, and more civilized middleweights with milder off-road capabilities like the CB500X and NC750X.

We worked our way through that lineup, starting with paved lot braking exercises, slow-mo figure-eights and “snakes and ladders”, before moving off the asphalt for gravel, grass, dirt and mud, hopping over logs, attempting water crossings and strafing dust-choked logging roads. 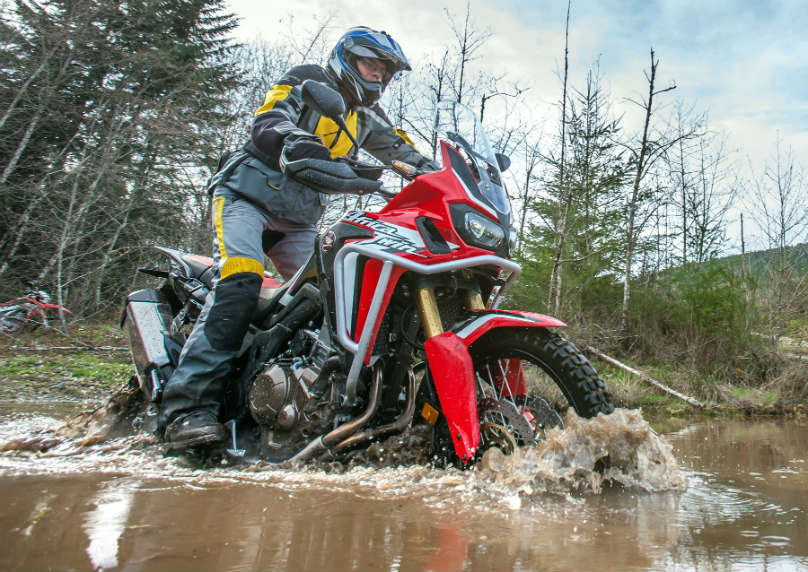 The new 2016 Honda CRF1000L Africa Twin is an adventure bike designed for “any road, anywhere”, a modern successor to the originals of the past. The first XRV650 Africa Twin was introduced in the late ‘80s, riding on the coattails of Honda’s Paris-Dakar successes, evolving into more powerful, more road-capable XRV750 models that lasted until 2003. Canadians could only envy from afar as none were ever sold in North America.

Compared to the last version of its predecessor, the new 2016 model is more powerful, featuring a 998 cc parallel twin engine instead of the 742 cc V-Twin. Honda engineers elected for the compact packaging, mass centralization and lowered centre of gravity of the parallel twin, but they made a nod to tradition with a 270-degree phased crank layout that simulates the traditional, uneven power pulse of a 52-degree V-Twin.

The new bike is a little shorter in body length, a little longer in wheelbase and a little taller in the saddle (850-870mm seat height).

It is also heavier and features a bigger 18-inch rear wheel, a smaller 18.8-litre fuel tank offset by improved fuel economy number. It has better braking, more suspension travel and modern innovations and technologies with over 32 patents pending.

Components worth considering include:

Our off-road refresher course reinforced stand-up riding techniques, the bike gripped between the legs, assisting the steering with weight shifts on the foot pegs, hands loose on the grips and two-fingered brake and clutch control, getting us through tasks that the Africa Twin passed ably. 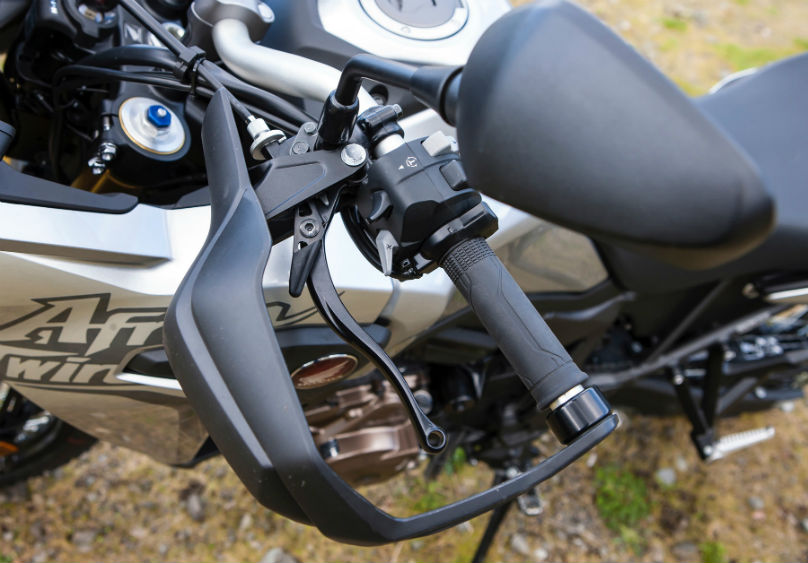 On day two, three of us opted for a long scenic ride along the West Coast Road, a smoother, more relaxed trip on pavement where, frankly, probably 90 percent of Africa Twin riding will actually occur. We switched through three models in Honda’s adventure lineup – the CB500X, NC750X and the Africa Twin.

RELATED: 48 Hours in Montreal on the new Sportster 48

The Africa Twin soon became my favourite, its tall bike architecture custom-made for my 6’3” frame. You might expect the front end to register as a touch light and unstable given the 45 mm Showa front forks’ long suspension travel but the bike’s 49.1/50.9 percent (front/rear) weight balance makes for a poised and planted feel on the road. The engine power pulse and aggressively tuned exhaust note seemed a slightly unnecessary affectation to me, but a charming one, nonetheless.

And the DCT is easy to get used to. Some riders will find it hard to give up the nostalgic tradition of manual shifting but the quick downshifts when you pin the throttle add an instant surge of almost VTEC-like power.

It’s a power surge that will have you grinning in your helmet.

The adventure riding segment is booming, and based on pre-orders made before the bike even comes to Canada this May, riders looking to push the boundaries with go-anywhere ability with new levels of toughness and technology have already added the 2016 CRF1000L Africa Twin to the short list of capable contenders. 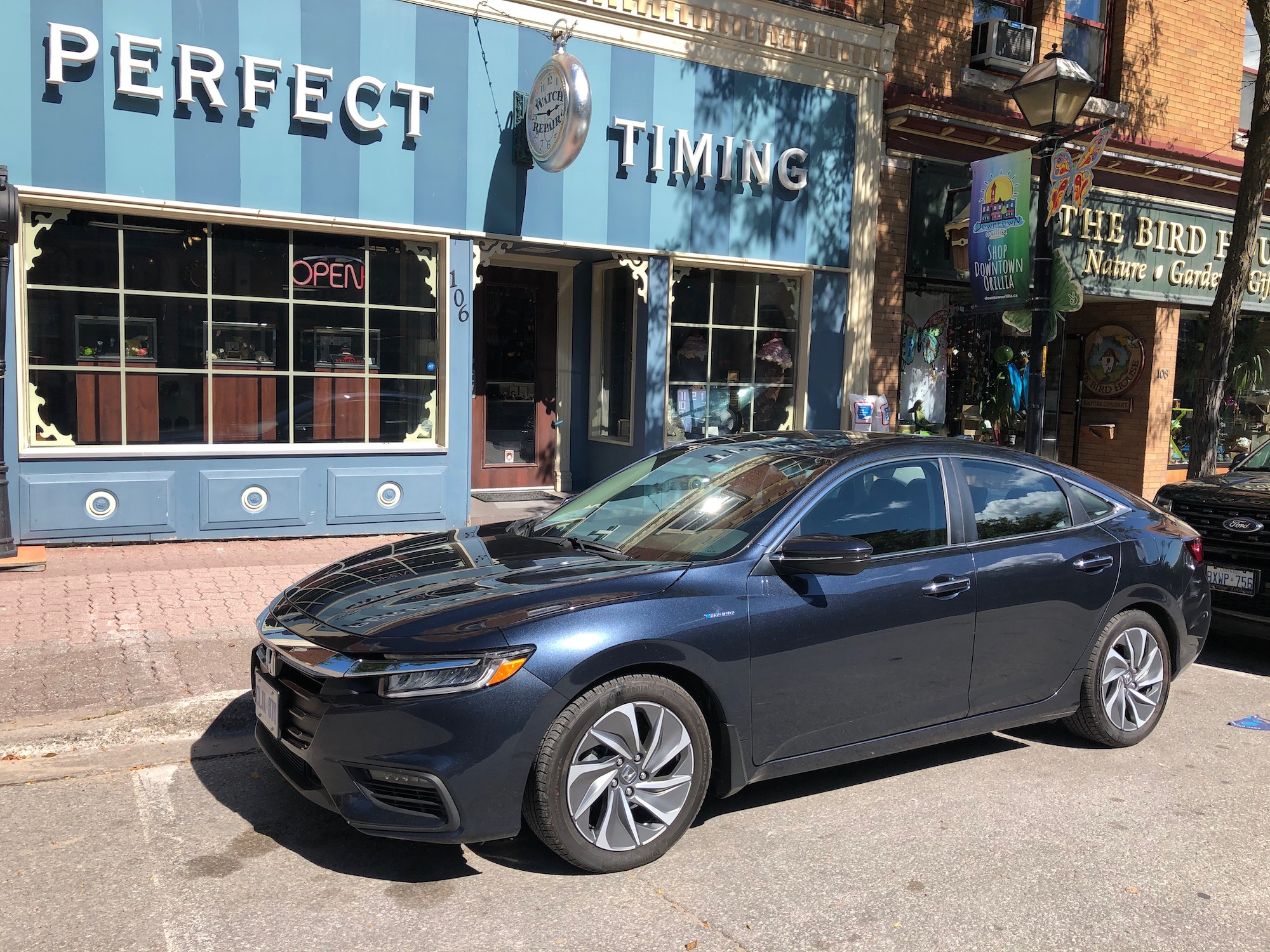