Looking sinister in glass black, the 2017 Honda Civic Type R is officially the fastest production front-drive car on the planet.

Everything you’ve heard about the 2017 Honda Civic Type R is true.

Three hundred and six hp and 295 lb/ft of torque from just 2.0-litres is only the beginning.

Available in either black or white (red rumoured for next year), the Type R has a huge biplane rear spoiler and, along with the 20-inch alloy wheels and red painted Brembo brake calipers, which makes this Civic stand out from all others.

It’s also just about the only Civic on the market not built in Alliston, ON, but in England, and will sell in Canada at $40,890. 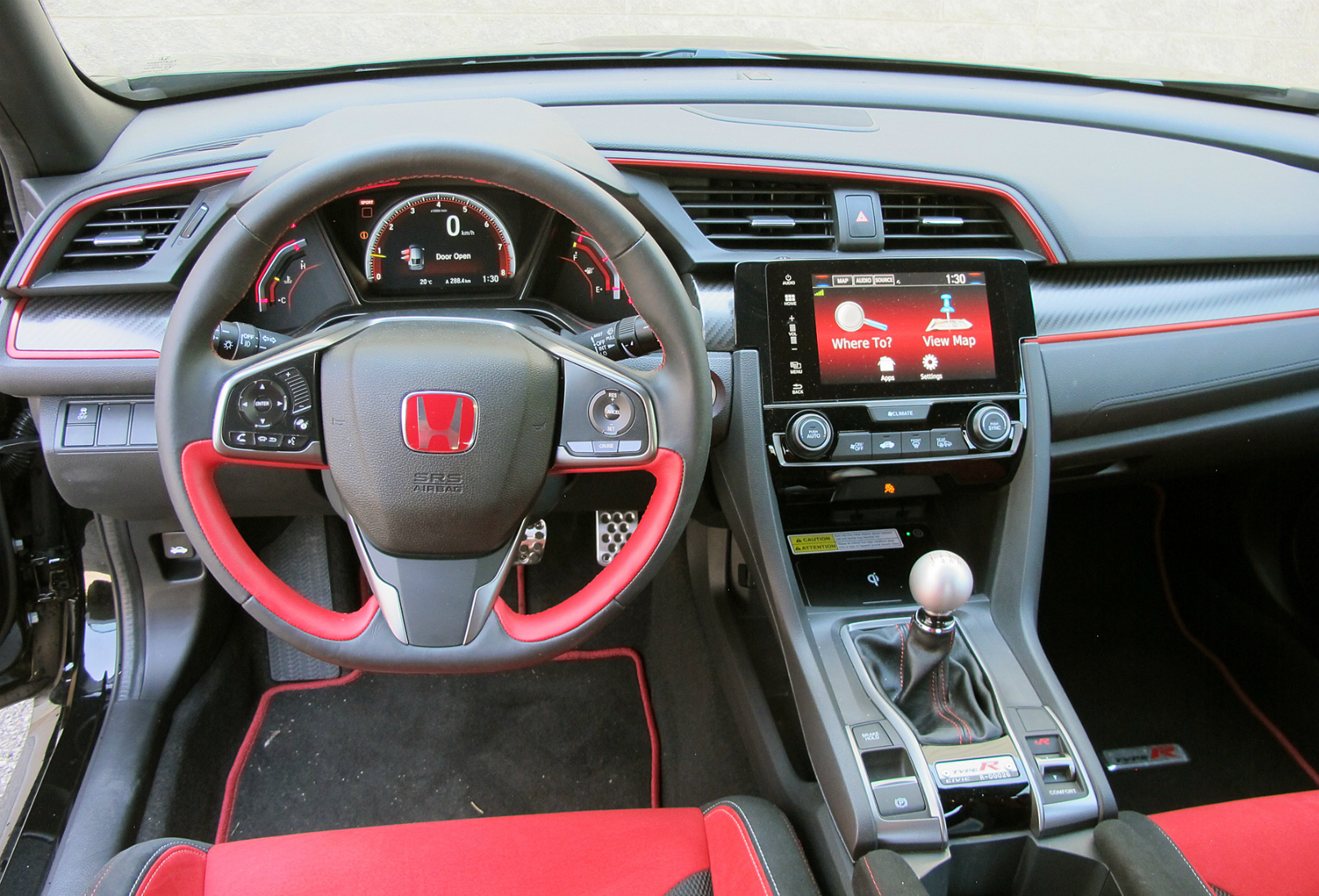 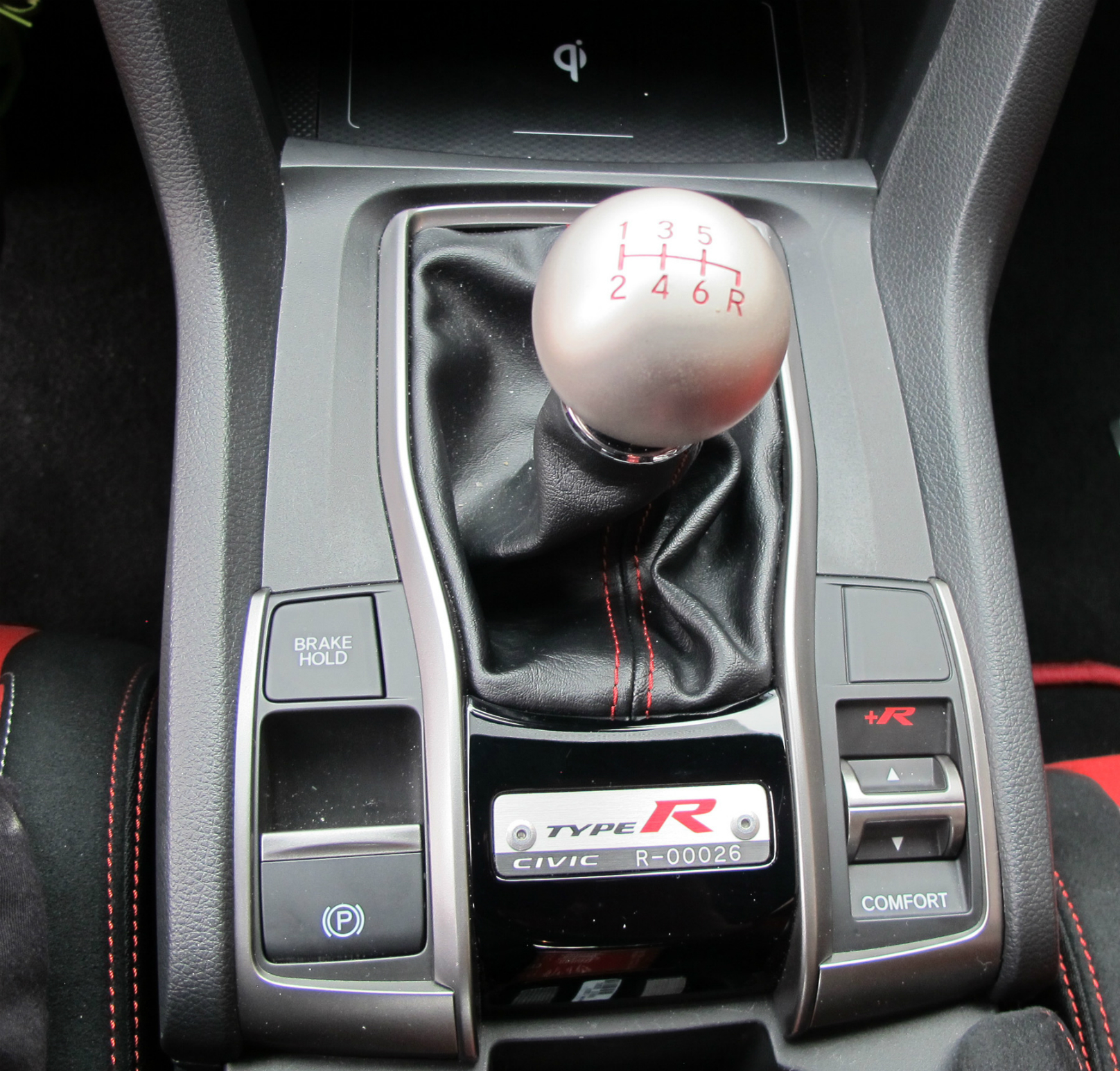 So much performance for so little money certainly resets the bang for the buck bar.

It’s also hard to believe the Civic Type R has been around in other markets since 1997, but for some reason, forbidden fruit here and in the rest of North America – until now.

What I’m still trying to wrap my head around is the fact that 100 hp per litre of displacement was once thought of as strictly hyper racecar stuff. 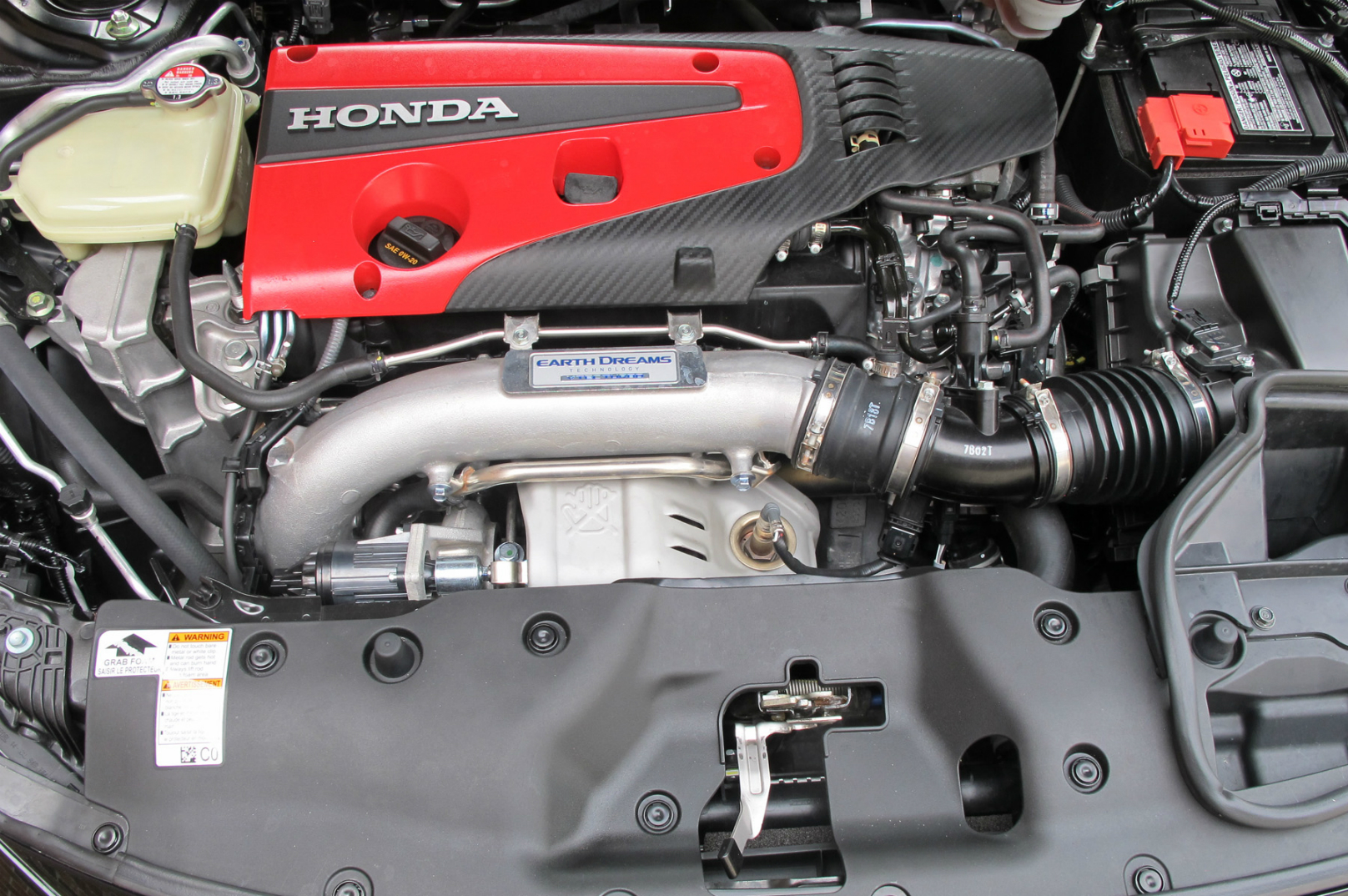 But here we are in 2017, where direct injection and turbo technology has become commonplace in everyday family vehicles.

So with chargers like the Subaru WRX STI and VW Golf R out on the hustings; Honda’s decision to bring the Civic R here makes a lot of sense.

You approach the Type R with trepidation because it looks so purposeful, especially in black as tested.

It starts with the lower splitter/spoiler at the front that blends into the lower side body kit and rises to the rear with lower spoiler across the rear liftgate coupled to a high wing spoiler.

Also Read: The 2017 Honda Civic Type R blasted around the Nurburgring in a time of 7:43

Looking at the upper rear roofline with diffusor strakes and the rooftop pieces that start at the front windshield to channel air rearward to the wings, you know serious aero sculpting was involved.

With front wheel well fender trailing air ducts and other aero aids, the capper is the three exhaust pipes at the rear, the centre of which has more to do with harmonics.

Or as a learned colleague told me, it “helps quiet the car in highway mode, but louder at idle. As you settle in to high speed cruising, the exhaust flowing through the centre outlet hits a resonant frequency.

“The resonator gets stuffed with air, stalling the airflow; the resulting backpressure diverts the exhaust to flow exclusively through the larger outboard mufflers, reducing the cabin noise at highway speeds.” 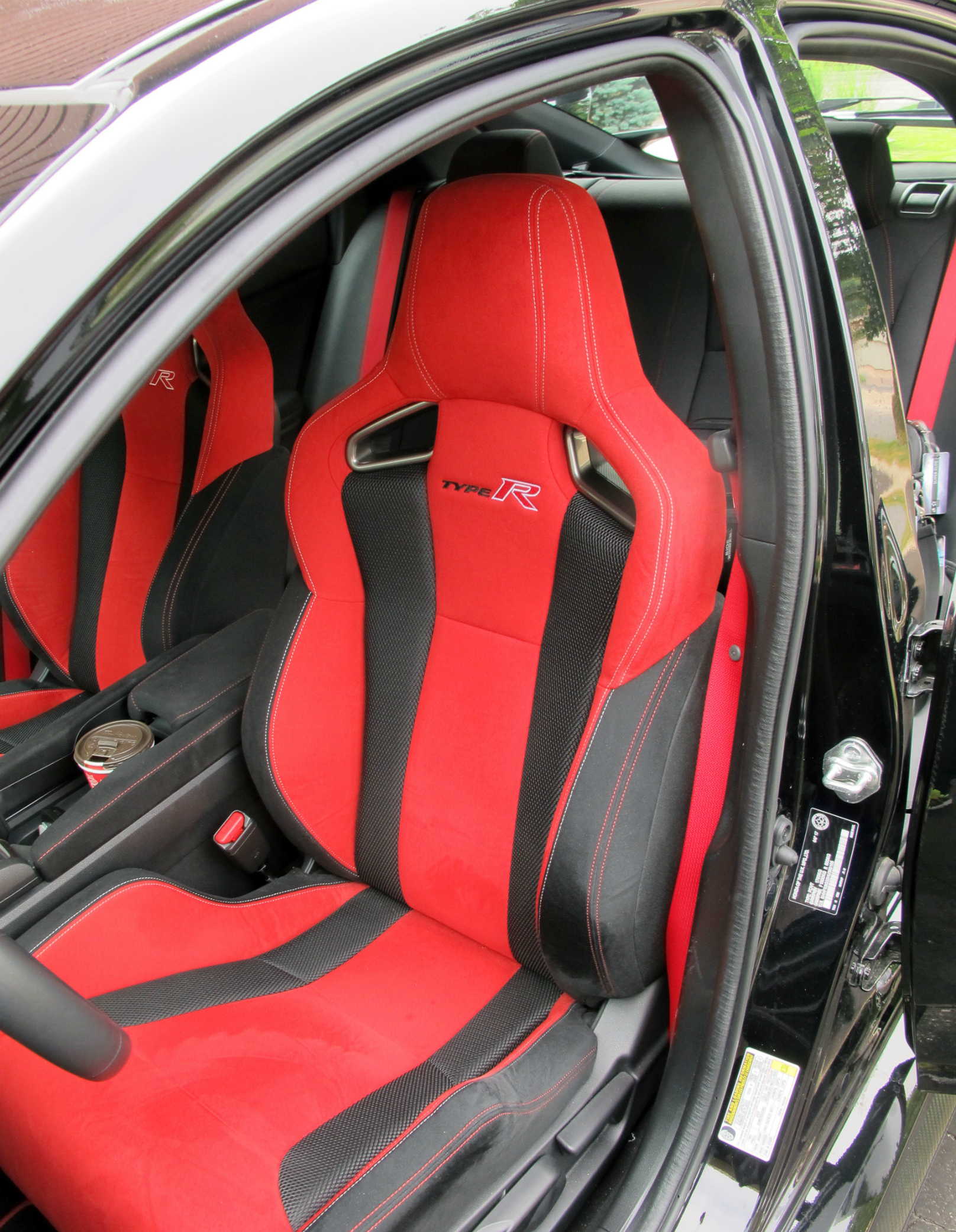 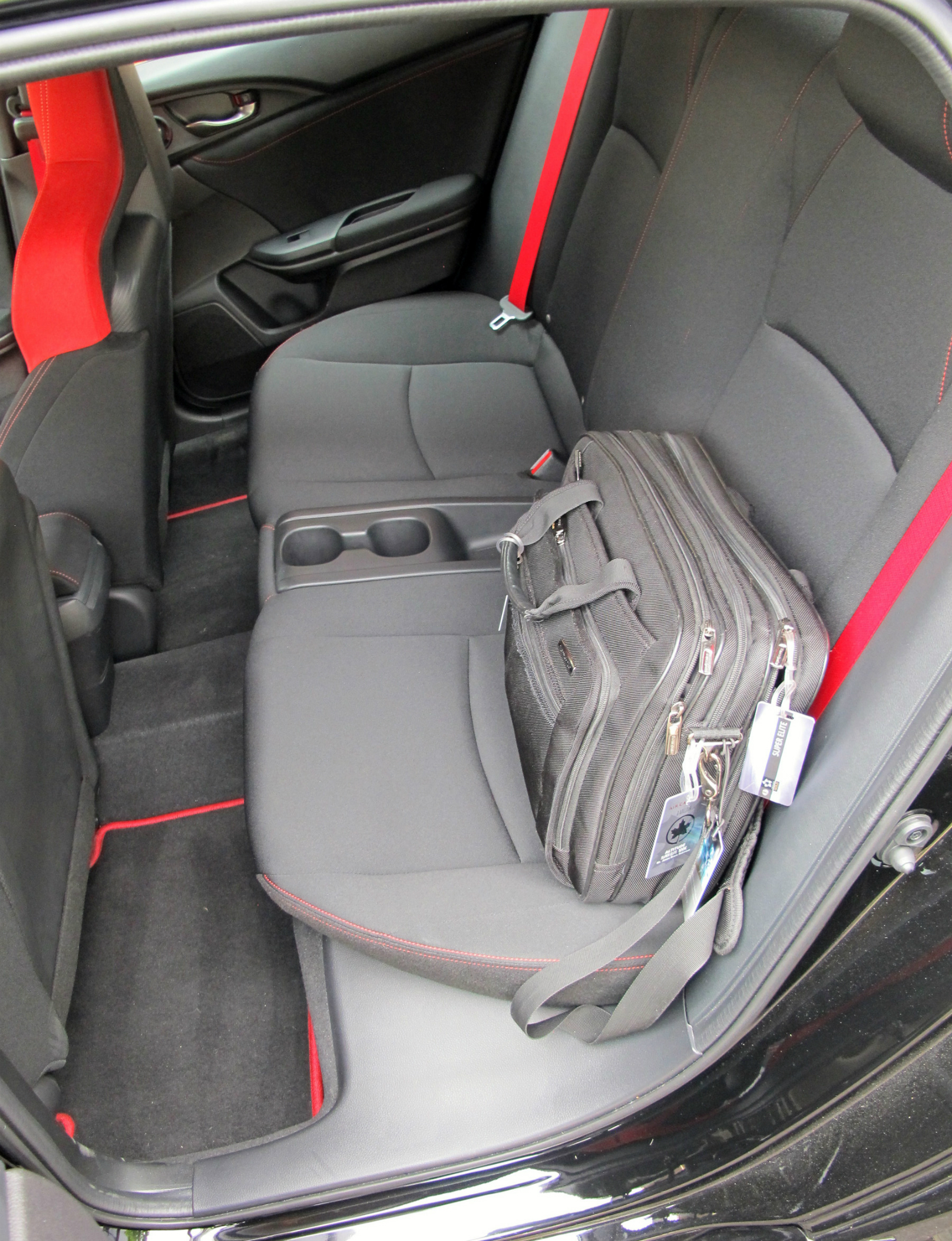 Noise reduced or not, the Type R emits a throated growl that turns into a howl at highway speeds. Also evident was a whine coming from somewhere when backing off and probably due to the engine braking effect on the turbo.

All this takes place with the driver very firmly planted in the high bolstered red and black sports seats with large main instrument cluster directly in sight of the view ahead.

The driver information display is great fun to play with, but the nifty thing is a switch on the left side of the centre console with three modes – Comfort, Sport and +R.

By changing response times, the Type R can go from mild to wild with the touch of a toggle. 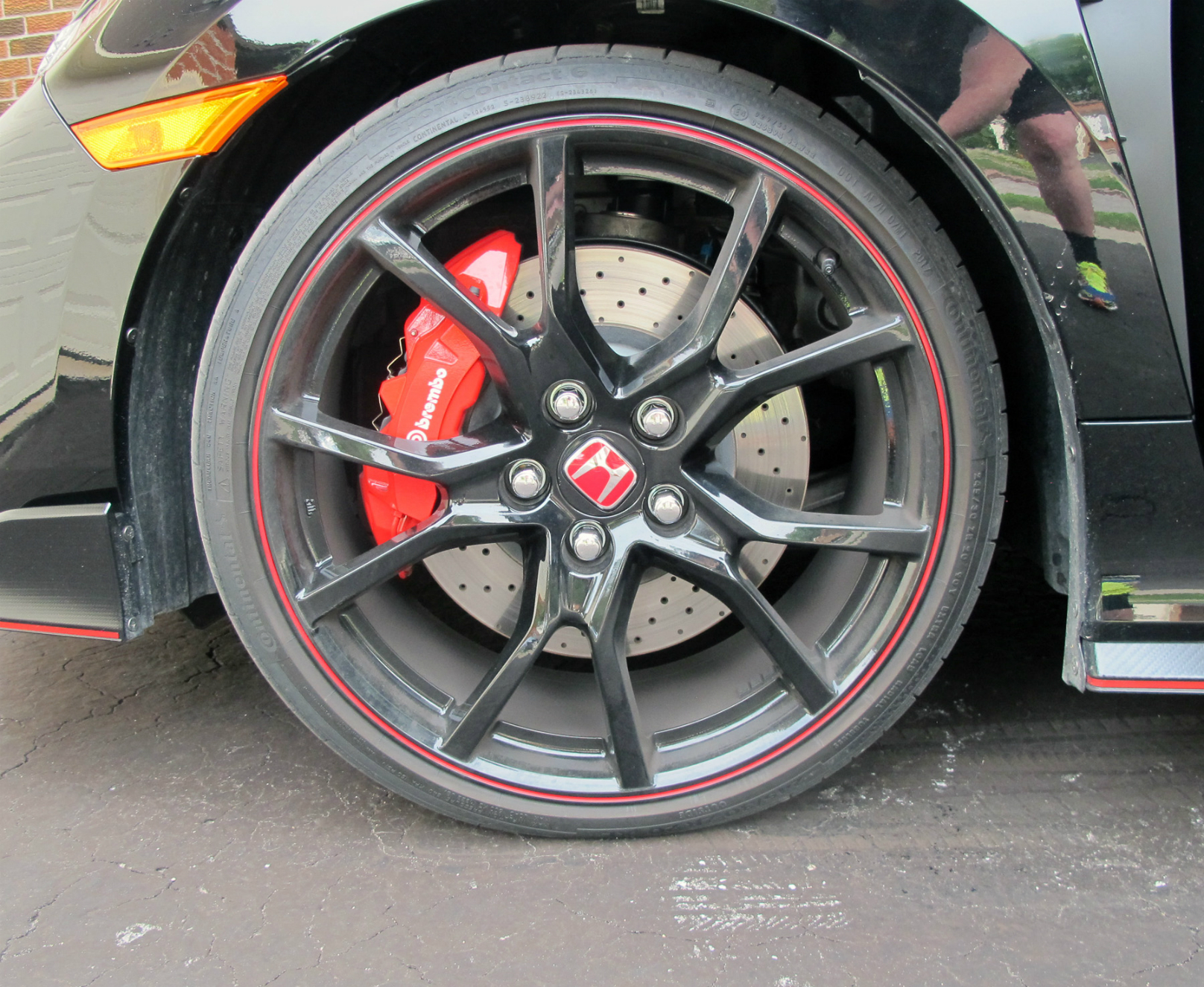 On a usually deserted, straight stretch of back road I know, I let the Type R go — finding boost built up so fast I was changing gears every two seconds until it hit fifth and the turbo came in at full song.

The engine takes about a second to fire up after the start button is pushed and then you’re treated to the almost Honda signature like lightness of the clutch and transmission.

The spring loading results in the shifter slotting to exactly when you want it, while the clutch pedal has a nice, graduated travel that’s easy to use in heavy traffic or when in spirited motoring mode.

Besides the large ventilated and cross-drilled brake rotors, the Type R rides on P245/30Z summer tires that look more like rubber bands on the Type R specific 20-inch alloy wheels.

Amazingly, being a Honda, there is a temporary spare beneath the cargo floor. 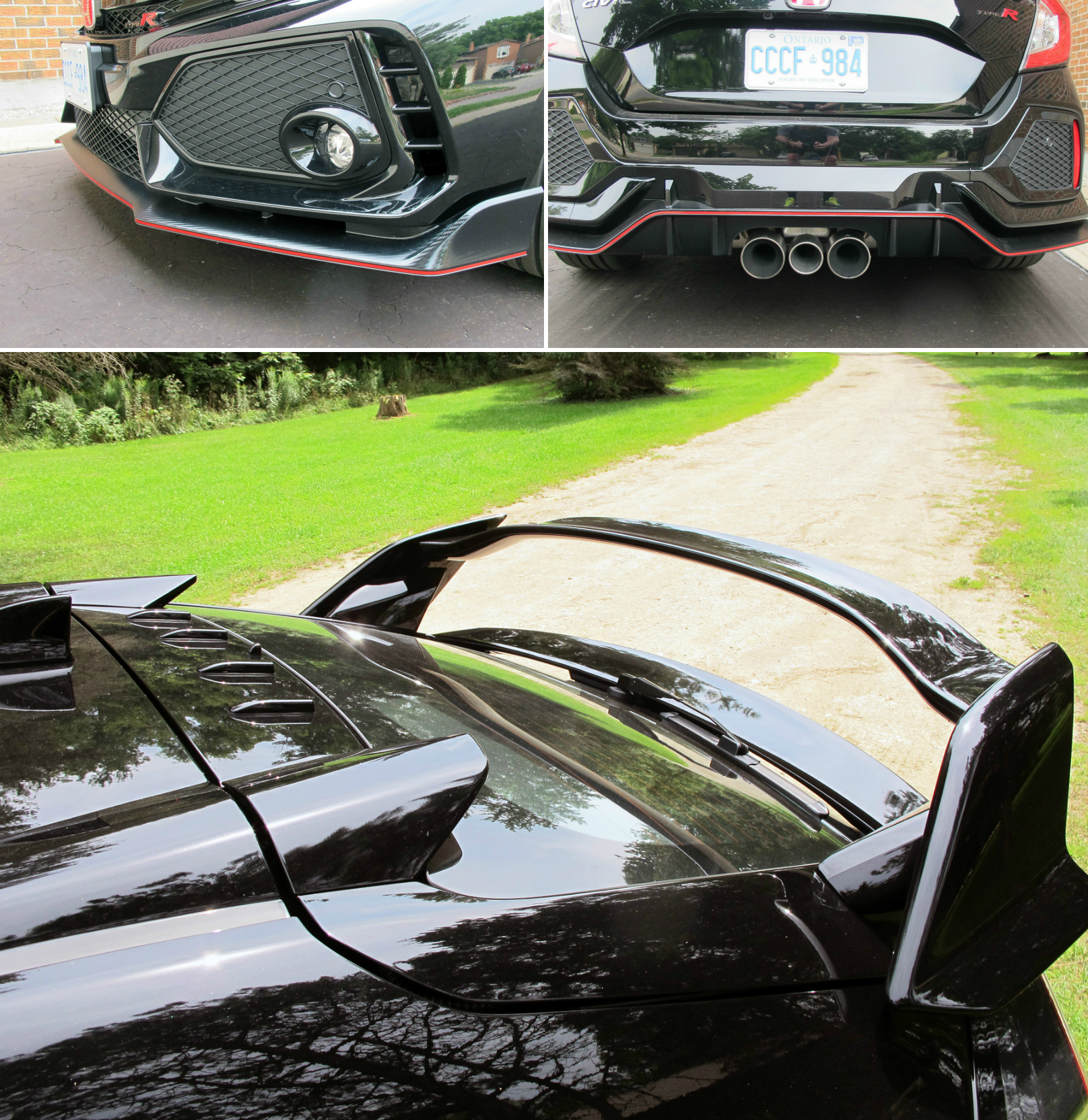 The 2017 Civic Type R shows what Honda has learned from hundreds of turbo racing wins and has distilled that into what is a very useable hatchback family car.

There won’t be many coming to Canada. So at the price, it’s already (in my opinion) a collector car.

Buy one while you can. 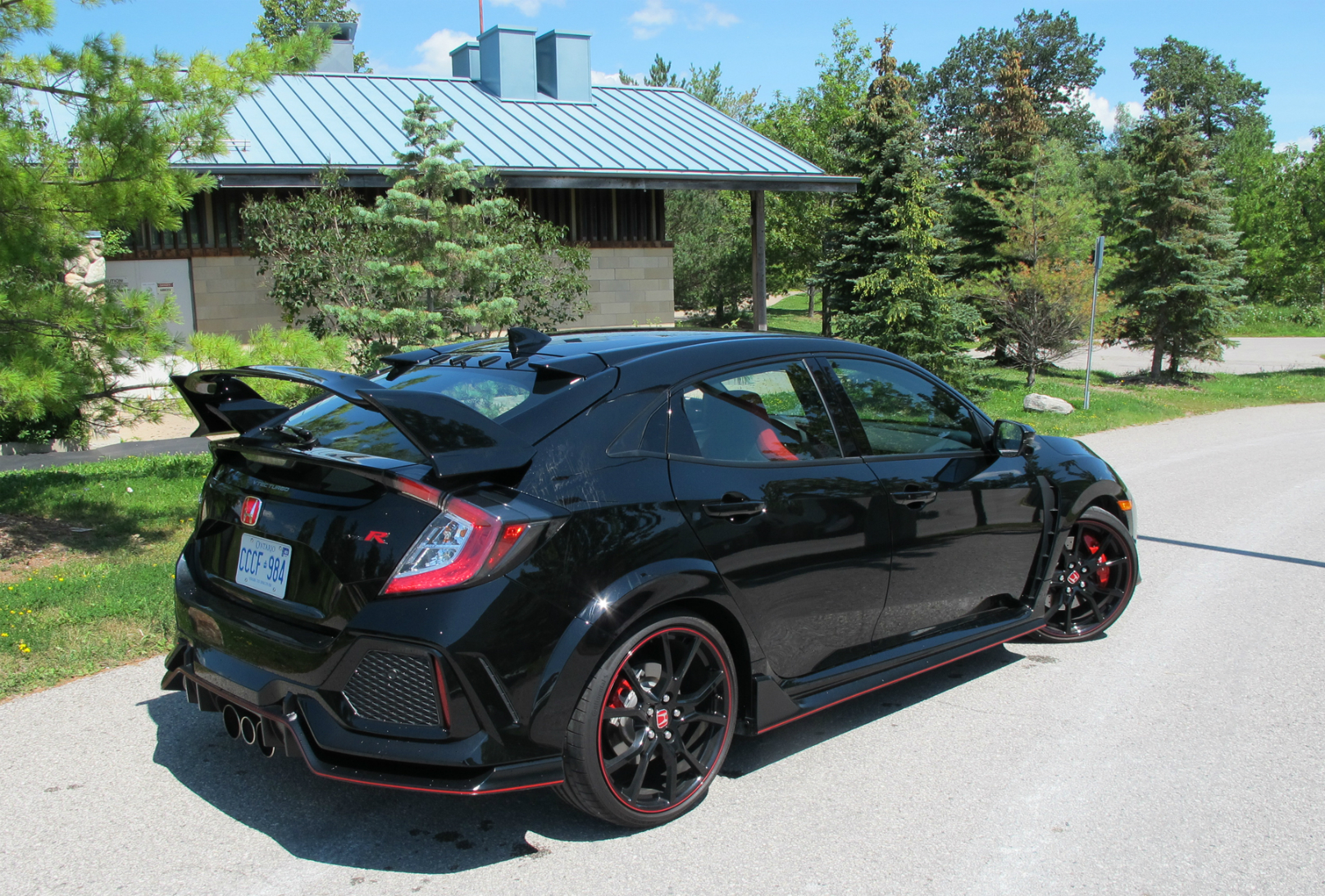