It maybe the smallest in Infiniti’s truck line up, but don’t let that fool you – the QX30 is certainly capable of anything winter can throw at it.

It’s been more than six months since the 2017 Infiniti QX30 was introduced to the Canadian marketplace.

It was first released in Seattle back in July when the weather was more accommodating to testing, but I was to put the QX30 AWD through its paces in true Canadian winter conditions.

To quickly recap; the QX30 is based on the Mercedes-Benz GLA but has been heavily restyled and re-tuned by Infiniti engineers. It comes with the same 2.0-litre twin turbo inline four-cylinder engine that produces 208 hp and 258 lb/ft of torque.

The engine is matched up to a Daimler sourced seven-speed, dual clutch gearbox. The transmission has been reworked by Infiniti and comes with standard paddle shifters and now includes economy, sport and manual modes. 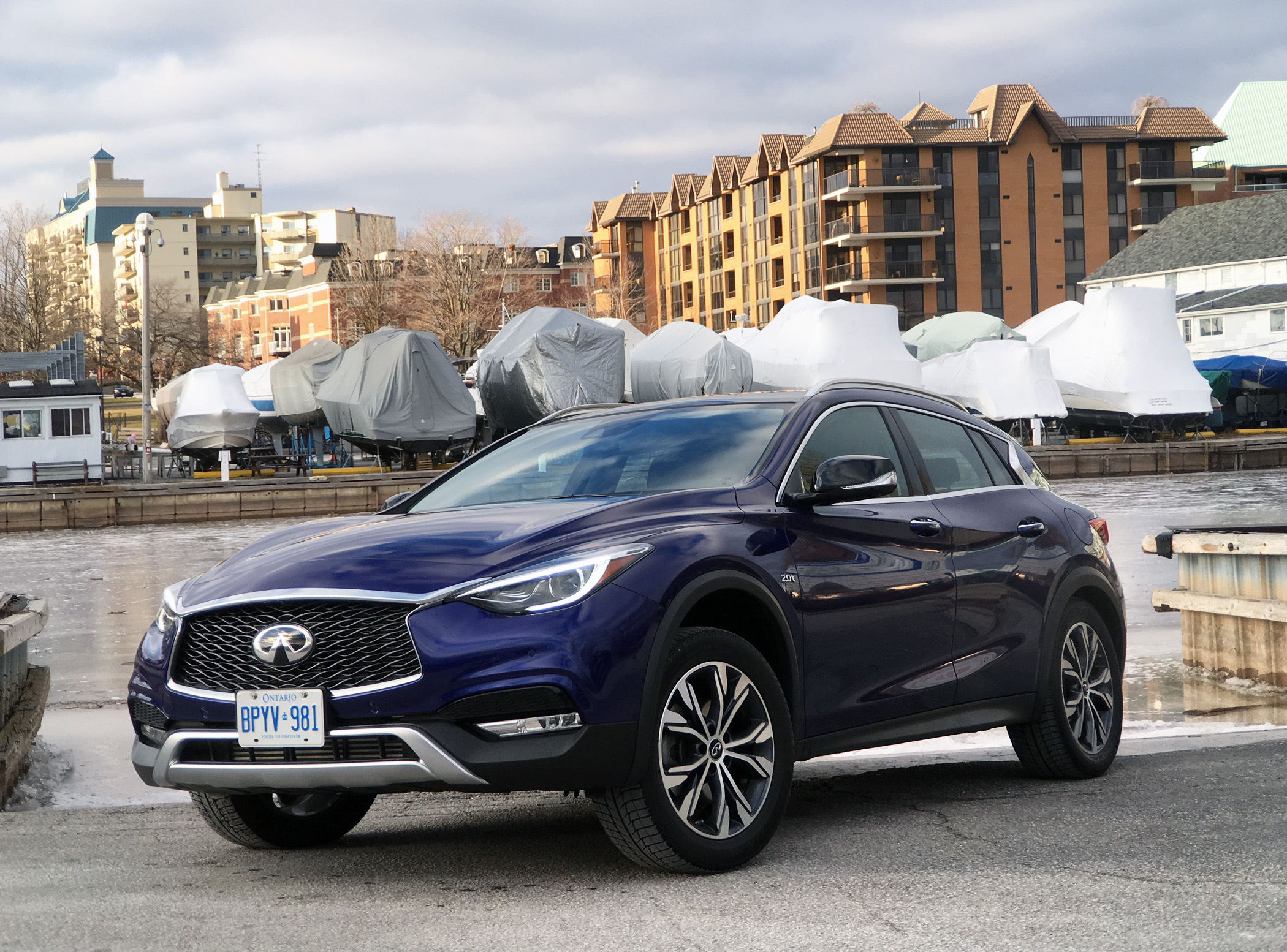 The exterior styling has Mercedes traits, but has a much smoother flowing body design encompassing some dramatic curves with the crescent-cut C-pillar that sets them well enough apart.

This particular QX30 came fully loaded with all the bells and whistles. The base price for the AWD is $38,490 but with the addition of the premium package ($5,000) and the Technology Package ($2,500) and not forgetting the Ink Blue paint scheme ($850) the price was pushed up to a hefty $46,640 before freight and PDI. 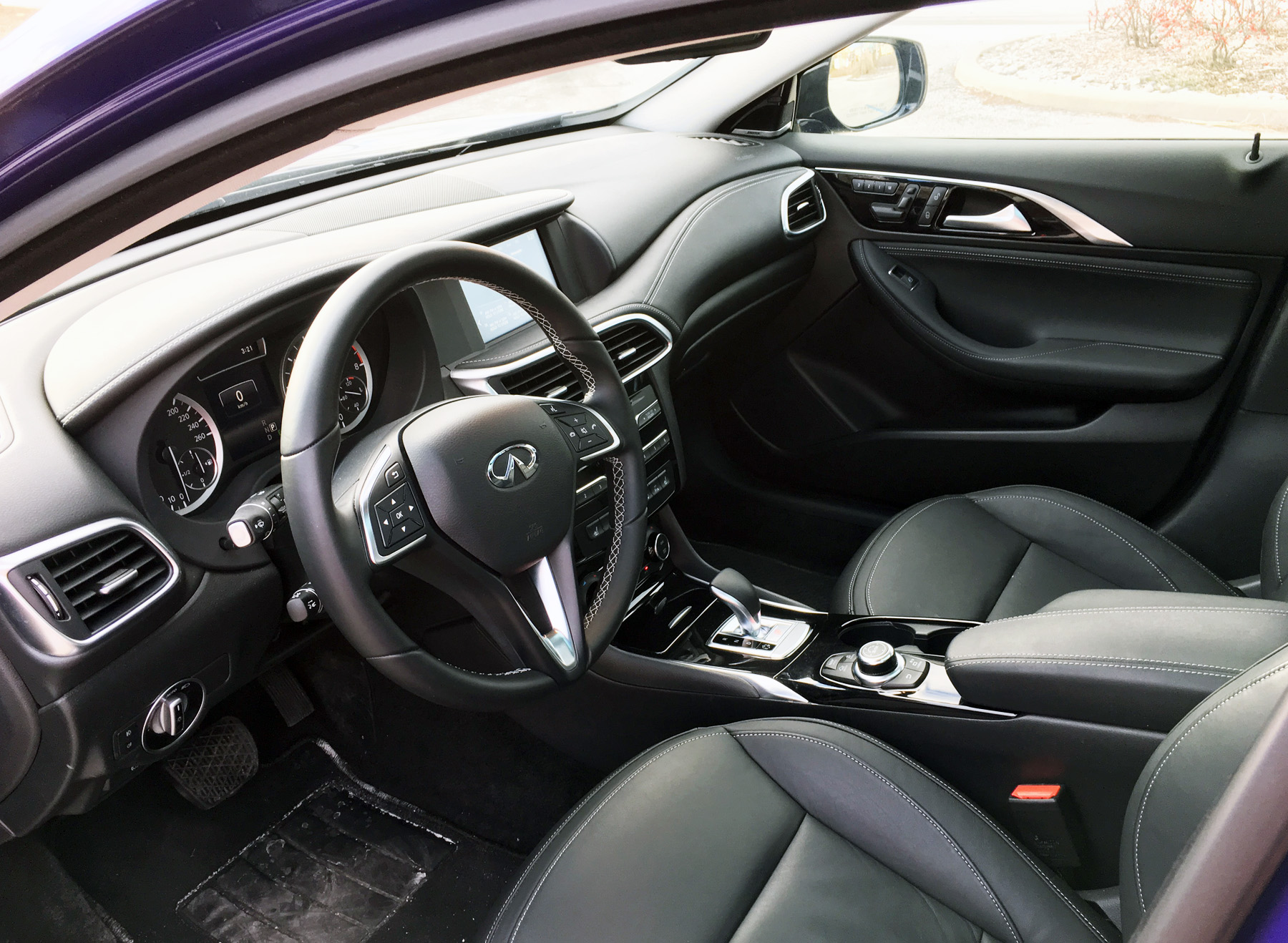 This QX30 is further enhanced by the blind spot and lane departure warning system, forward emergency braking, intelligent cruise control and park assist and around view monitor (with moving object detection) included in the Technology package.

Usually when there is so much enhanced technology in a vehicle, the controls can be confusing and almost intimidating.

I was surprised at how neat and uncluttered the dash was. The centrally mounted seven-inch display is easily read and more easily controlled by the module that sits down close to your hip right next to the cup holders.

At first I thought that was an awkward position as they are usually located centrally in the consol. After a few minutes of driving I found it easy to use without having to take your eyes off the road to find it.

I had the QX30 for my annual drive to the North American International Auto Show in Detroit. It’s about a four-hour drive in good weather – a rarity in January. 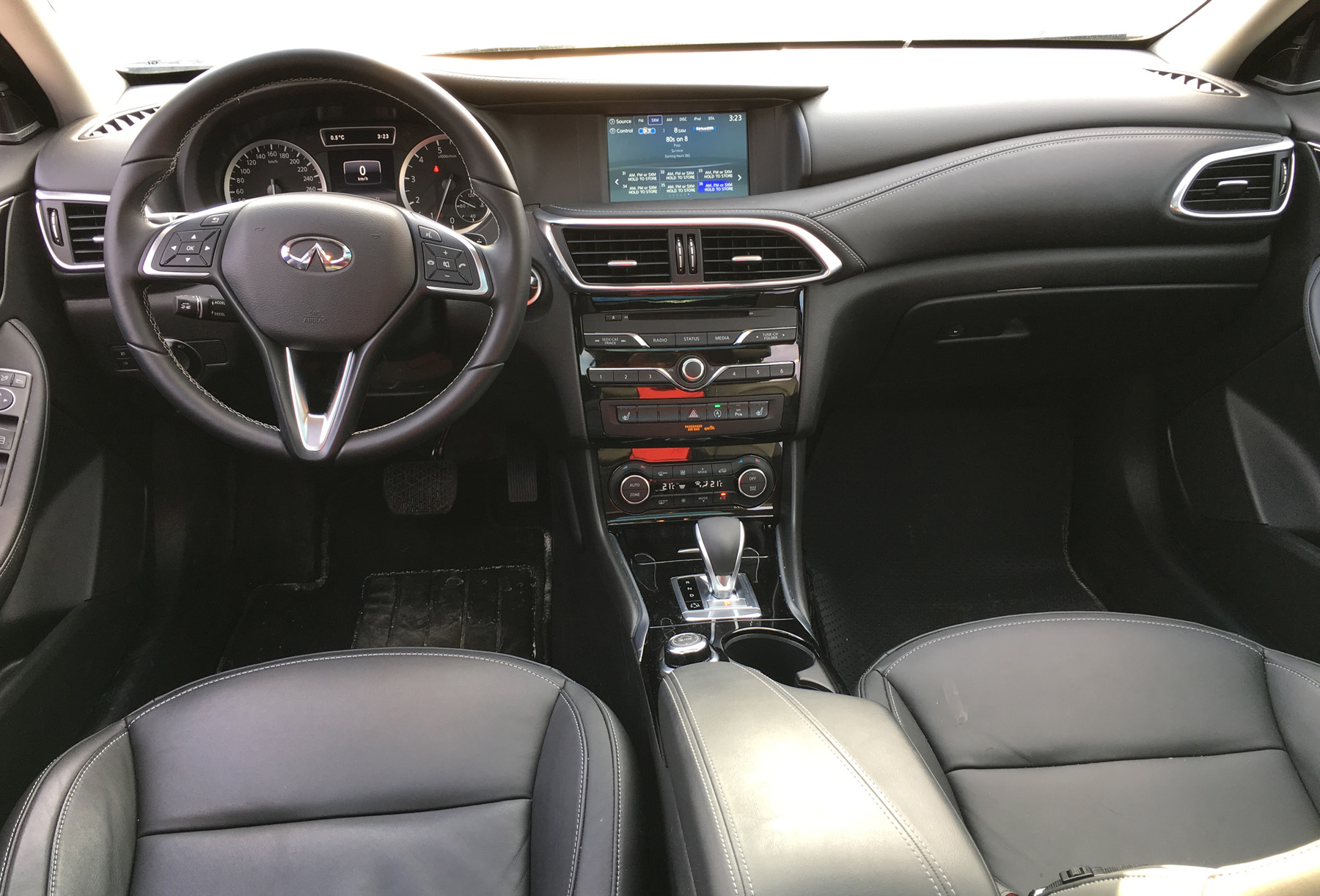 On setting off the weather was playing along, the roads were dry and visibility was good.

On the twisty roads leading to the highway the QX30 handled admirably, the engine was smooth with gear changes even smoother – even when playing with the shifter paddles. It handled more like a sedan than a CUV, the steering was precise and it held the road with virtually no body roll.

Once on the highway I got to play with some of the toys.

The intelligent cruise control is very easily set up and controlled; it certainly takes the strain out of highway driving. The lane departure warning gives a gentle vibration on the steering wheel, as if driving over a rumble strip making you aware that you are starting to drift. 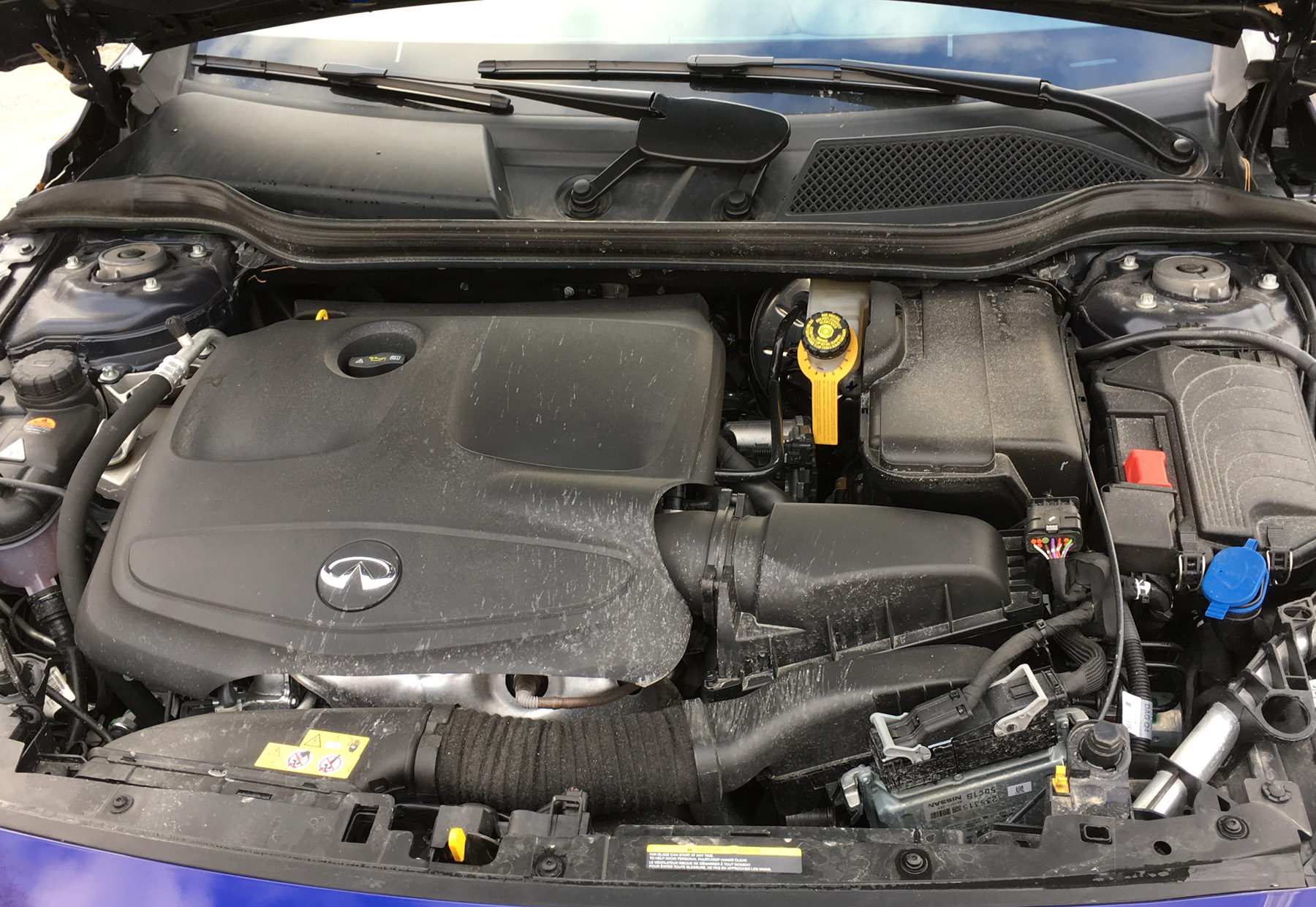 The navigation system was easy to set up, but I was concerned about the time it was telling me it was going to take to my destination.

This was to prove way more accurate than I would have believed. It calculated the exact time of arrival taking real-time traffic and road conditions into consideration when calculating. The Bose sound system was way better than I have become accustomed to in vehicles in this class.

The four-hour journey was uneventful and made much easier by the QX30 taking control for most of the way.

The return journey was the exact opposite. 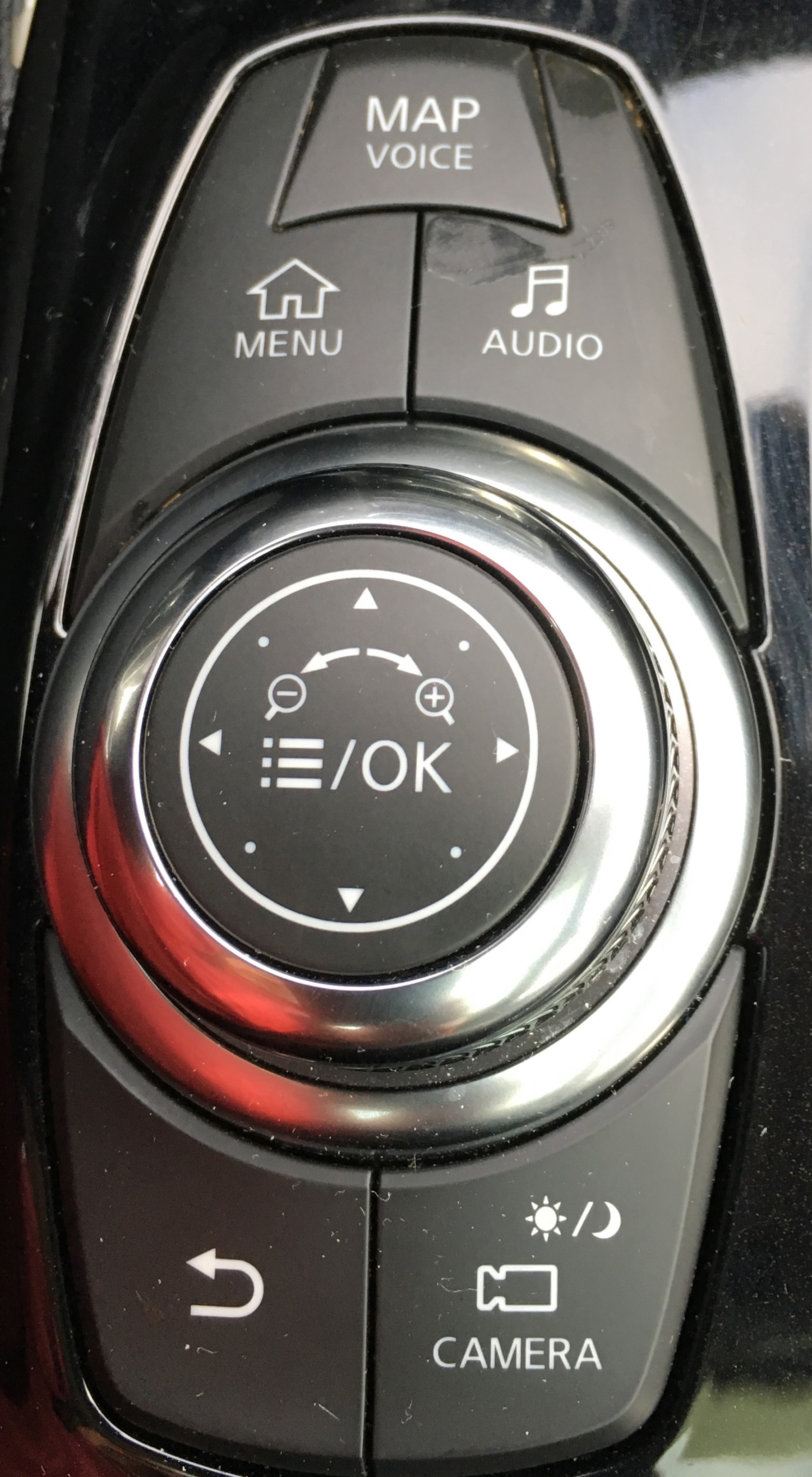 I left during a heavy snowstorm that was to follow me for the full journey.

This is where the QX30 was to prove itself invaluable. The all wheel drive system worked flawlessly along the snow-covered highway. The fitted winter tires were another “must have” addition to this vehicle for driving in such bad conditions.

I did try the intelligent cruise control to see how it handled such bad weather; understandably it was having a hard time with all the snow covering the radar sensor.

But it did give a noticeable warning on the dash that it was turning itself off because of the conditions. Once the sensor was clear enough for the radar to scan the road ahead again it, it let me know that the system was again active and ready for use.

The QX30 seemed to relish the harsh winter conditions and certainly gave me confidence when driving in such bad weather.

It maybe the smallest in Infiniti’s truck line up, but don’t let that fool you – the QX30 is certainly capable of anything winter can throw at it. 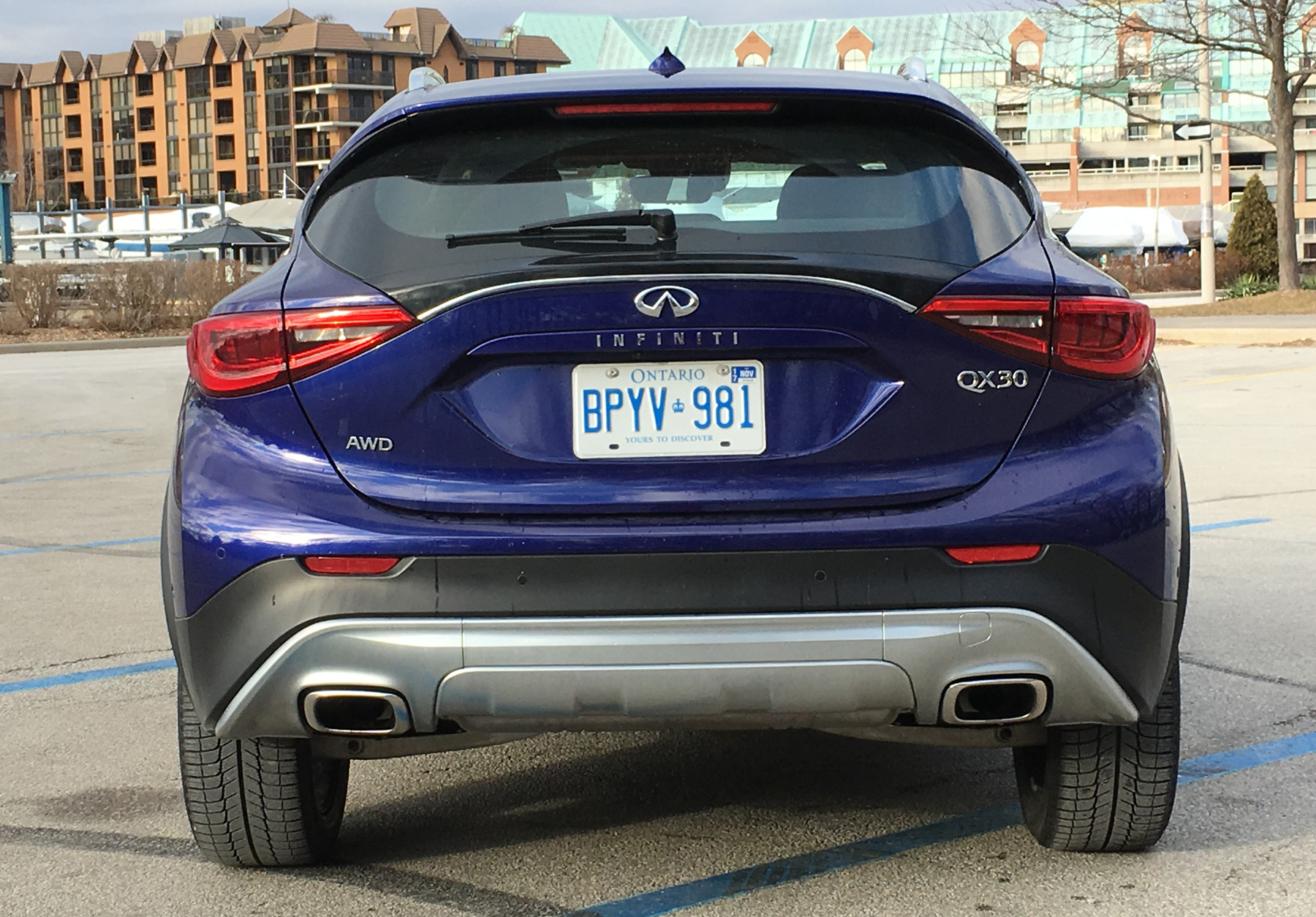