The Infiniti Q60 offers three power choices (I’m rounding off here) that step up in 100 hp increments, from 200 hp to 300 hp and 400 hp. All engines are mated to seven-speed automatics and standard all-wheel-drive here in Canada.

“Wow, that’s a nice red,” the girl said as she handed me my coffee and donut.

“Uh, yeah, it is, isn’t it?” I replied, a little surprised at her comment.

People think automotive journalists get jaded but surely it should be just as hard to arouse interest during the constant parade past the Tim Hortons drive-thru.

But the red resonated on this Q60, a vehicle we can consider a “halo car” for Infiniti, being the only coupe in their lineup.

Yes, the Q50 sedan shares some of the same decor and DNA but premium sports coupes are where designers hang their hats, where they find the freedom to push the styling envelope and accentuate form over function more boldly.

And this newest 2017 version of Q60 dares to wear its charisma with confidence, from its wide, aggressive stance to the double arc grille, the deep crease below the beltline accentuating two-door sportiness, the sneaky narrow lights front and back, and the convergence of curves and lines culminating in a sleekly muscular profile. 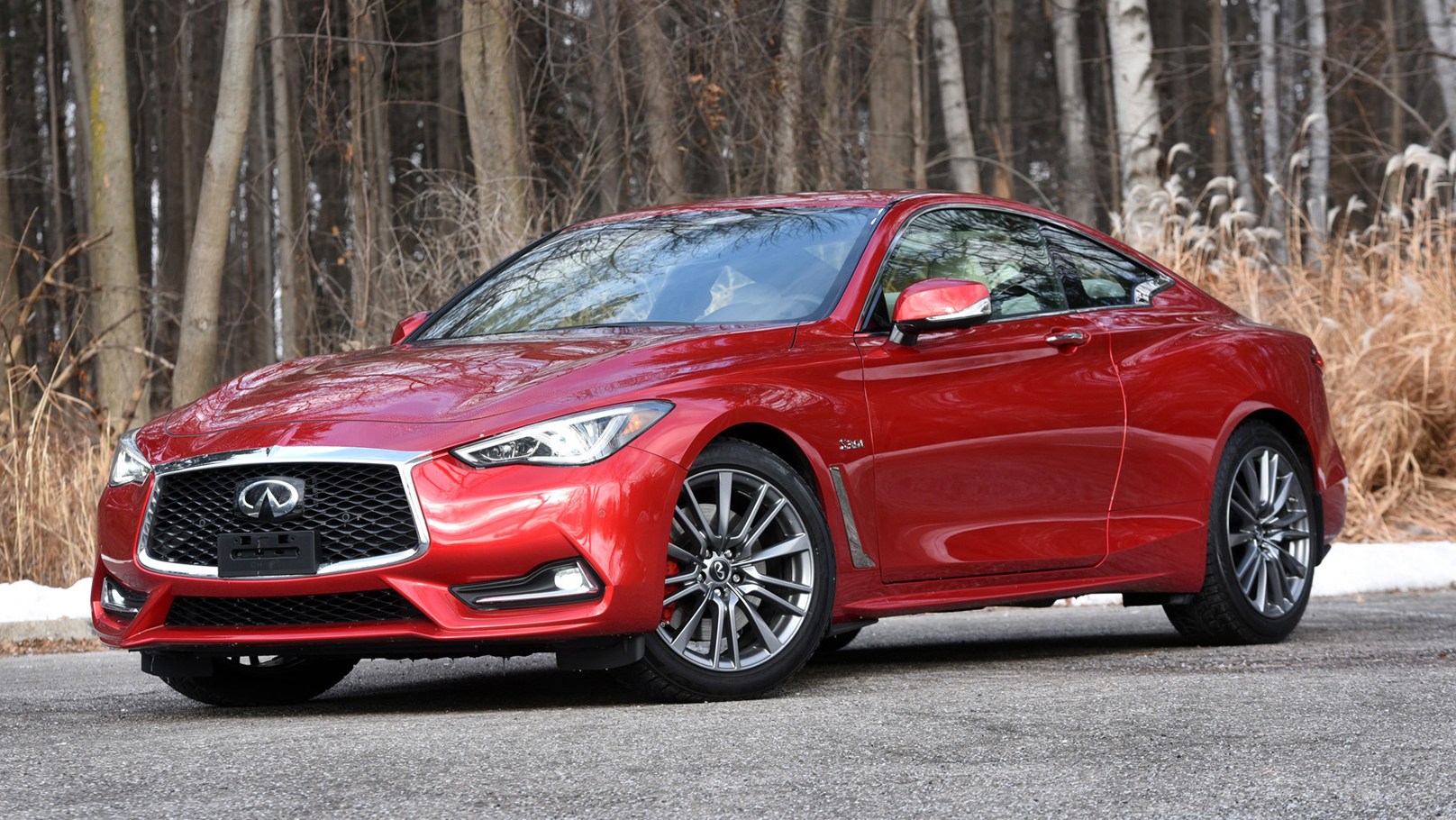 Some consider the overall effect a little too busy but I like the added touches – the chrome side gills and the widening chrome strip of the crescent-cut C-pillar.

There’s also a neat little chrome button, inset in the driver’s side taillight that opens the trunk. I was less impressed with the trunk itself because, on rainy days, raising the deck lid tends to stream water into the cargo area, a perplexing faux pas of fundamentals.

That seemed about the only design clanger of the car, outside of the archaic pedal parking brake, a bit of an old-school surprise. 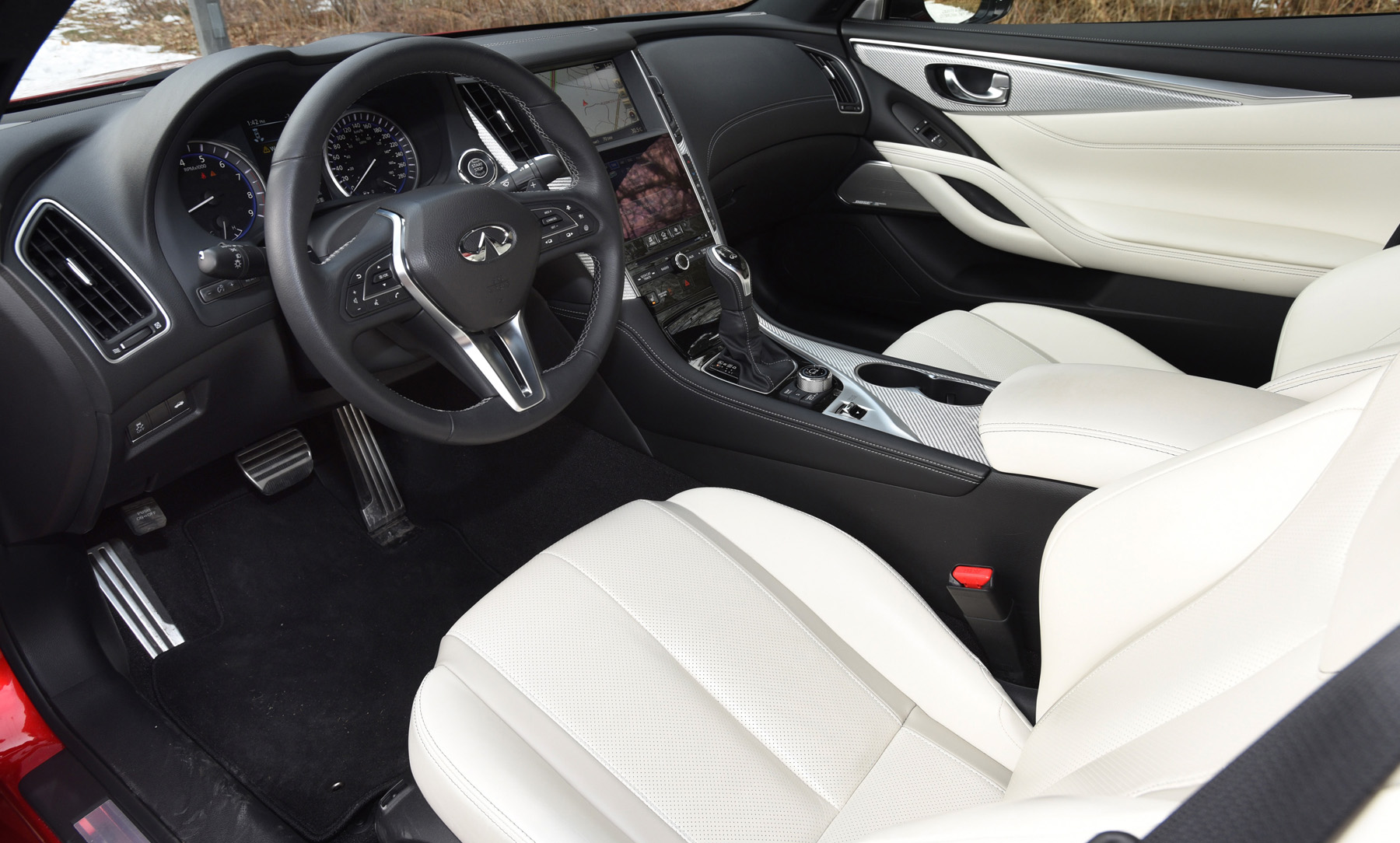 Yes, there are some sacrifices for sexiness inherent in two-door coupe styling – the low ceiling under a sloping roofline, the snug quarters and the 2+2-style rear seat that is really more of a repository for briefcases, bags and the occasional brat.

But, inside and out, the upscale touches come together harmoniously and the Q60 is loaded with luxuries, technologies and amenities you’d expect from a premium brand.

The Q60 offers three power choices (I’m rounding off here) that step up in 100 hp increments, from 200 hp to 300 hp and 400 hp. All engines are mated to seven-speed automatics and standard all-wheel-drive here in Canada.

The lineup starts with an entry-level 2.0-litre single scroll turbo inline four-banger than makes 208 hp and 258 lb/ft of torque. But we’re going to focus on two V6 versions tested here. 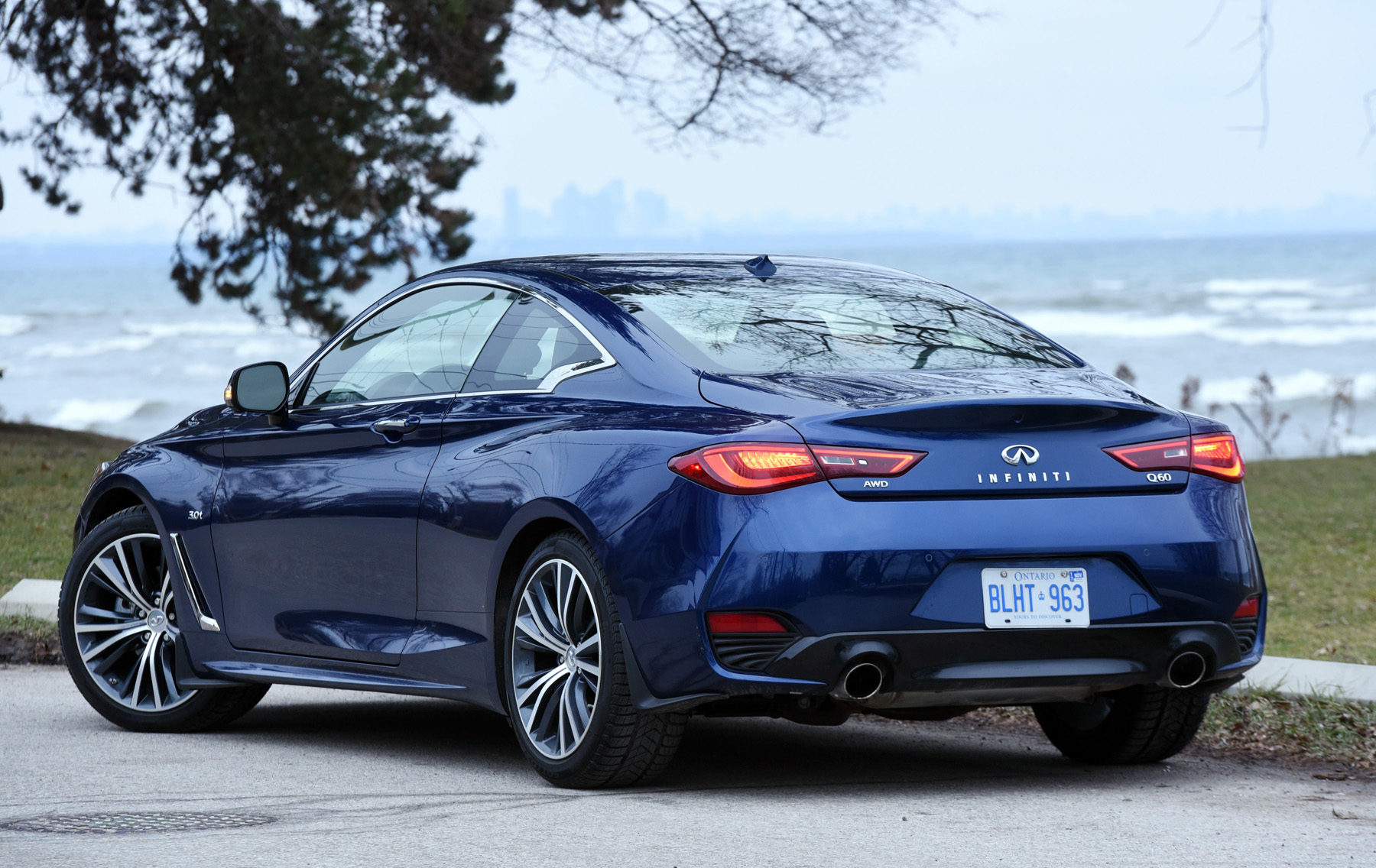 There are no Stop/Start or cylinder deactivation technologies attached and, frankly, I’d like a little more tuned exhaust brouhaha here, but the quiet power rush pushes you firmly into your seat back. And the exhaust and engine noise subtleties seem somehow in sync with the civilized quarters, leather-bound and serenely comfortable, nicely trimmed and well put together, a 13-speaker BOSE Simulated Surround System providing the soundtrack to your drive, infotainment selections available through dual eight-inch upper and seven-inch lower touchscreens.

Nimble handling is enhanced by the all-wheel-drive’s default 50/50 power split between front and rear, by the Infiniti Drive Mode Selector Settings choices – Standard, Sport, Sport+, Snow, Eco or Personal modes, and, in this case, by an optional Driver Assistance Package ($2,000) that adds dynamic warning and intervention technologies.

It all rounds out to a competent mix of sport performance and styling panache.

This uber version of Q60 takes its name from the red “S” sport badge mounted on the rear. But the Dynamic Sunstone Red paint job that our Tim Hortons girl liked so much matches the Red Sport abilities and attitude perfectly.

The resulting 50 per cent horsepower jump to 400 hp and 350 lb/ft adds an adrenalized edge to hair-straightening acceleration. Fuel economy is relatively unchanged by the power increase, rated at 12.5/9.2L/100km (city/hwy) but both testers averaged around 12L/100km (comb) in a real world mix of testing.

Throw in Silver Optic Fibre trim to counter the contrasts of creamy leather and black and you have one of the prettiest interiors I’ve ever sat in.

The Red Sport is the complete package.

But, regardless of trim choice, the broad palette of Q60 goodies and go-fast abilities might just have the German premium brands a little on edge. And this Q60 premium sport coupe lineup is certainly a worthy contender for the attentions of luxury performance customers.