The Prius Prime is Toyota’s most advanced plug-in hybrid.

OJAI, CA: Prime real estate, prime rib and Optimus Prime, all the best in their fields.

Toyota hopes to add a fourth name to that list when it launches the Prius Prime in the spring of 2017.

The Prius Prime is Toyota’s most advanced plug-in hybrid.

Noting it is more than a name change, Toyota Canada vice president Stephen Beatty said the new Prius is “the most fuel-efficient vehicle,” using 1.9 litres of gas per 100 kilometres, a number Toyota says is 12 per cent better than Chevrolet’s Volt and 22 per cent better than the Prius Plug-In.

You May Like: Preview: 2016 Chevrolet Malibu Hybrid sings a fuel-sippin’ tune

With an electric range of 35 kilometres, Beatty says the new Prime will meet the driving needs of 75 per cent of the Canadian driving public.

The car can travel 965 kilometres on a full tank and a full charge in hybrid mode.

But why just talk about the car?

Toyota couldn’t have chosen a better location as it looked like every 10th car on the road in California is a Prius. Even the cabbies happily drive around in their Prius.

And if a Prius wasn’t in front of you, the other electric vehicle on the road is a Tesla. 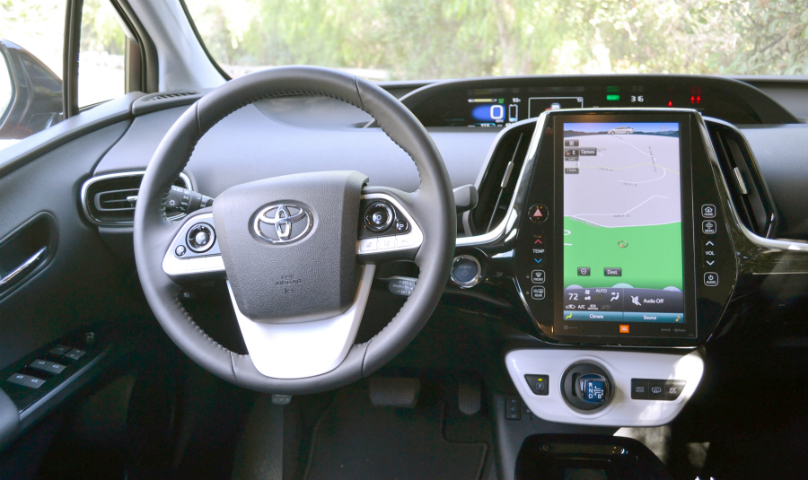 But that is likely out of the price range of Canadian families looking for style and comfort, while trying to help the environment and not have to rob a bank.

The first thing you notice when you step into this car is the enormous 11.6-inch display screen. (The screen is seven inches on the Prius Prime). You can’t miss it. But even at that size, the screen looks like it is just another part of the car, which says a lot about how Toyota designed this vehicle.

Inside, the Prime Technology features integrated satellite radio, 10 speakers, advanced voice recognition and numerous other features. But the star of the show is the screen.

It shows you exactly how the car is performing, where the energy is being produced and how well you are driving.

Our first short trip featured a drive with just the electric motor working to power the car.

It had great response time when you hit the accelerator and never missed a beat keeping up with traffic. Because of the silence due to the electric motor, the cabin can be noisy particularly from the tires.

After using the battery, a longer trip allowed my co-driver and I the chance to see how the gas motor worked.

Needless to say, the car performed admirably. At one point, the screen informed us we were getting 199 mpg (1.4L/100 km).

The Prius handled all the curves going up and down the hills surrounding Los Angeles.

It even kept up with a Mustang GT convertible, the driver and passenger each taking selfies as we waited for some construction. 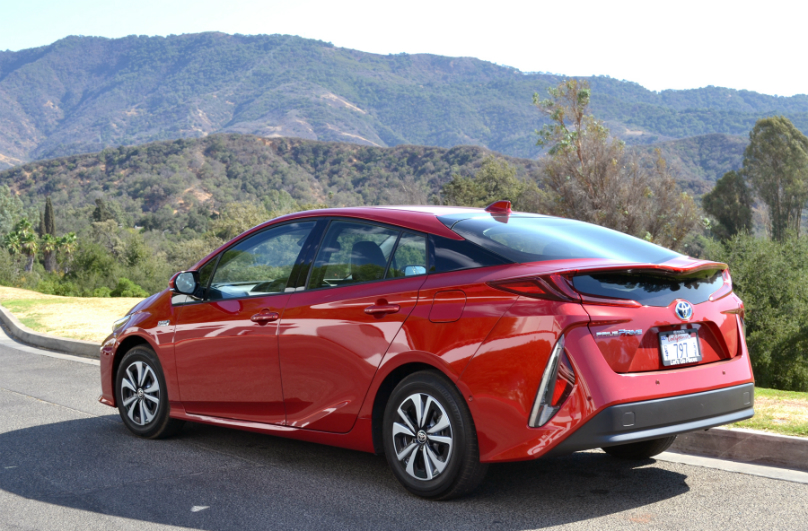 The Prius comes loaded with a number of standard features including back-up camera, heated leather-wrapped steering wheel, lane departure alert, automatic high beams and dynamic radar cruise control which, when on, keeps a safe distance between you and the car in front of you.

Outside the Prime sits lower than its predecessor, features LED Quad headlamps, a new stylish front grille and a carbon fibre liftgate.

This is one classy looking hybrid.

Charging time is about five hours on a standard outlet (120 volts), two hours with a 240volt outlet.

If our short drive is any indication, Toyota has a winner with its redesigned Prius.