Only a few hundred of these roadsters were sold in Canada last year, but the SL is one of the ultimate cars for getting noticed in comfort.

SAN DIEGO, Calif. — While the Mercedes-Benz SL roadster is a pretty rare sight on Canadian roads, less than 300 were sold here in all of 2015, that tiny sales volume seems fitting for a machine with such rare history.

It made its debut as a roadster companion to the 300 SL (Super Light) grand tourer in 1957, three years after its hardtop, gull-winged door sibling went on sale as a production version of the legendary W 194 race car that won the 24 Hours of Le Mans in 1952.

Sixty years on, the current sixth generation R 231 SL (introduced in 2012) carries the legacy of the original roadster forward with four distinct models that are powered by four engines and available with three transmissions. 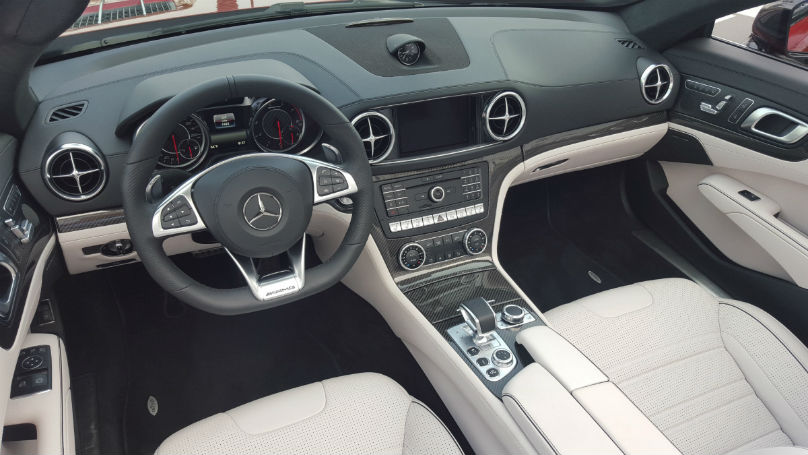 For the forthcoming 2017 model year, copies of which will begin arriving in Canada in late spring, the SL receives a mid-cycle styling update and more content.

I don’t have room to dive into all four models here so I’m going to focus on one: the SL 63.

It’s powered by a 5.5-litre biturbo V8 mated to a seven-speed multi-clutch automatic that drives the rear wheels. 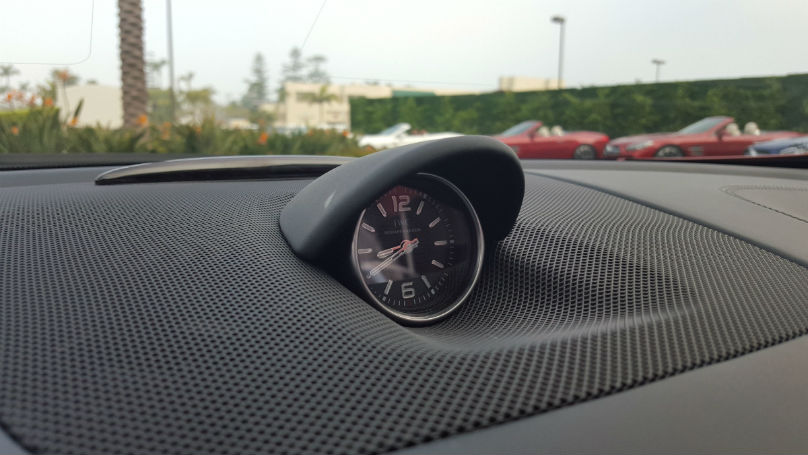 Power is rated at a prodigious 577 horsepower and 664 lb-ft. of torque, which is capable of launching the car to 100 km/h from rest in a mere 4.1 seconds with an electronically-limited top speed of 250 km/h.

In terms of changes, the most obvious is the redesigned front end which sports a tasteful new AMG-styled twin louvre grille finished in chrome, new active LED high performance headlights and wide air intakes situated below a main grille.

The sides of the car now carry wider air outlets behind the front wheels and AMG side skirts, while the rear gets a redesigned bumper and diffuser that houses an AMG sports exhaust system with twin chrome-plated tips on either side. 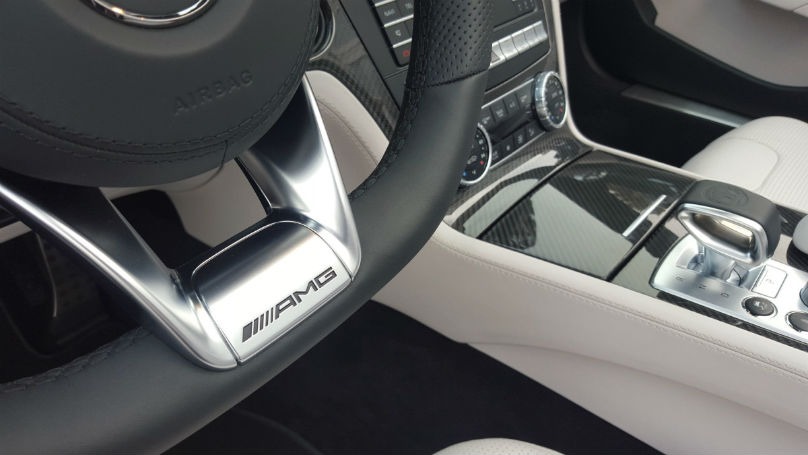 All of these changes give the SL 63 a distinct AMG family resemblance. From the front, it now bears a striking resemblance to other AMG models of late, the GT S coupe in particular.

Mercedes-Benz chose to stage the SL media preview in sunny Southern California, and if ever there was a market that perfectly matches the aspirations and temperament of the car and the locale, this is it.

The U.S. is one of the biggest markets for this car according to Mercedes, and the car culture in Southern California is like no other. 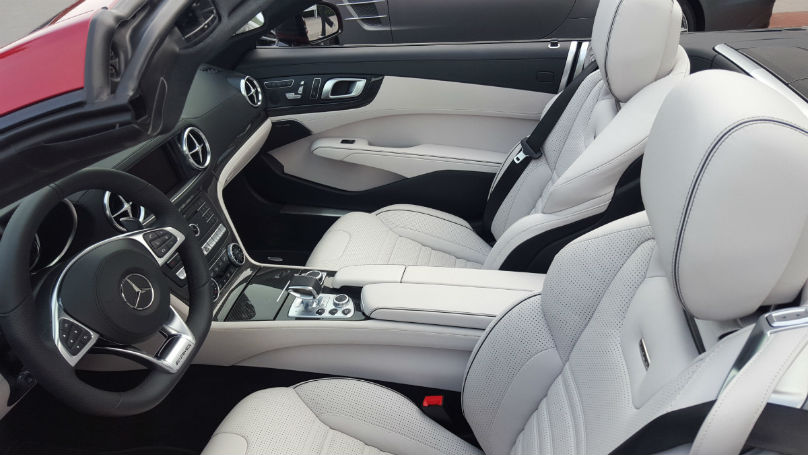 Here, cars truly are status symbols — machines to be seen and seen in — and the SL 63 and its V12-powered SL 65 sibling fit right in.

Despite its gaudy numbers and rear-wheel drive configuration, the SL 63 is not a track car. It’s made for two-lane cruising, a reality that became clear along a drive route that wound along the breathtaking Pacific coastline from Newport Beach to San Diego.

Sure, you can crank the Dynamic Select knob on the centre console to Sport+ and mash the accelerator. The biturbo V8 will happily comply, propelling you to highway speeds in mere seconds, but with the top down and the sun shining, what’s the hurry? 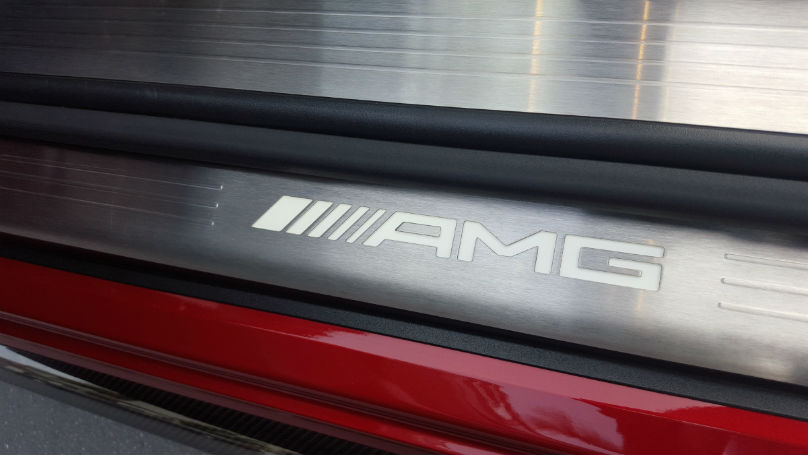 The SL 63 is meant to be enjoyed, and it doesn’t get much better cruising along with its slick-operating top stowed and its standard 600-watt, 14-speaker Harman / Kardon stereo cranked.

Now this isn’t to say the SL 63 doesn’t like the twisty stuff — the car’s Active Body Control suspension does a great job of keeping things in check, making braking and cornering both drama-free and a lot of fun.

It can be an exhilarating car to drive fast, no question, but the SL 63 is happiest cruising along on the open road. 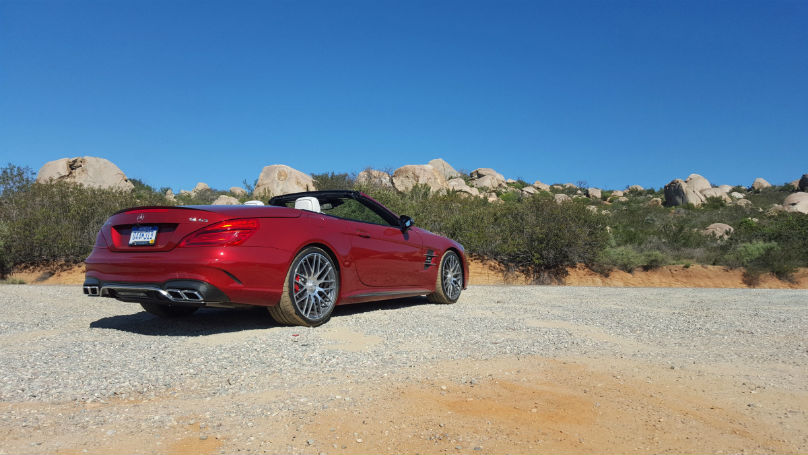 ACCESSIBILITY: A bit low slung, but not enough to make entry and exit difficult

LOOKS Sleek and sexy, with the right amount of performance character — just like is ancestors

INTERIOR A bit snug, but luxurious and filled with the finest amenities

Plentiful — from the hand-built engine, to the Active Body Control suspension, to the 600-watt, 14-speaker Harman / Kardon stereo and a whole lot more, the SL 63 comes fully loaded

It’s a gorgeous roadster the delivers impressive performance, but even better than that it’s an ideal car for long drives with the top down.

For those with the means, the 2017 Mercedes-AMG SL 63 is an ideal choice for warm weather cruising with the top down and the stereo turned up. It’s carries impressive AMG performance credentials as well, but you’re not buying it for the track day potential. It’s a great choice for a summer weekend getaway, however.

For this story, travel and other expenses for Lee Bailie were paid by the manufacturer. To provide feedback: wheels@thestar.ca