Preview: BMW’s 340i updates a blast to drive

On the narrow and twisty canyon roads in and around Mirador, both the 340i and 340i xDrive were in their element. Simply stated, both were an absolute blast to drive — fast, responsive and precise, particularly in Sport+ mode, which sharpens acceleration and allows the engine to be revved right to the limiter.

MIRADOR, MEXICO — There is no car more important to BMW’s current and future prospects than the venerable 3 Series.

Simply put, after 40 years, six generations and 14 million copies sold worldwide, the compact sports sedan is the heartbeat of the company and now accounts for one quarter of its total sales. It’s the bestselling BMW in key markets such as Germany and the U.S. (and Canada).

The current sixth gen — commonly known as the F30 — dates back to the 2012 model year, which puts it in the sweet spot for mid-cycle updates, hence the recent preview of the 340i (rear-wheel drive) and 340i xDrive (all-wheel drive) in northern Mexico.

These cars slot in at the top of the 3 Series range, replacing the 335i and 335i xDrive, but the changes run deeper than mere name swapping; there are several tangible alterations in store as well.

The biggest change occurs under the hood, with the introduction of a new 3.0-litre turbocharged inline six-cylinder engine, a modular unit from BMW’s EfficientDynamics engine family.

Designed to deliver better performance and efficiency, while also shedding weight, this all-aluminum unit produces 320 horsepower and 330 pound-feet increases of 20 and 30 respectively over the six-cylinder unit in the outgoing 335i.

Paired with the new motor are two transmissions, an 8-speed automatic and a 6-speed manual. While not entirely new gearboxes, BMW has made some improvements to both. The automatic has greater efficiency and a wider gear ratio spread, while the manual gets a rev matching function.

Other changes include new damper technology for improved handling and ride comfort and a new electric power steering module. The spread between the Comfort and Sport driving modes has also been increased to make the difference more noticeable, while the Sport setting has dialed even further to the performance end.

BMW has also spruced up the exterior, although these changes are pretty modest. 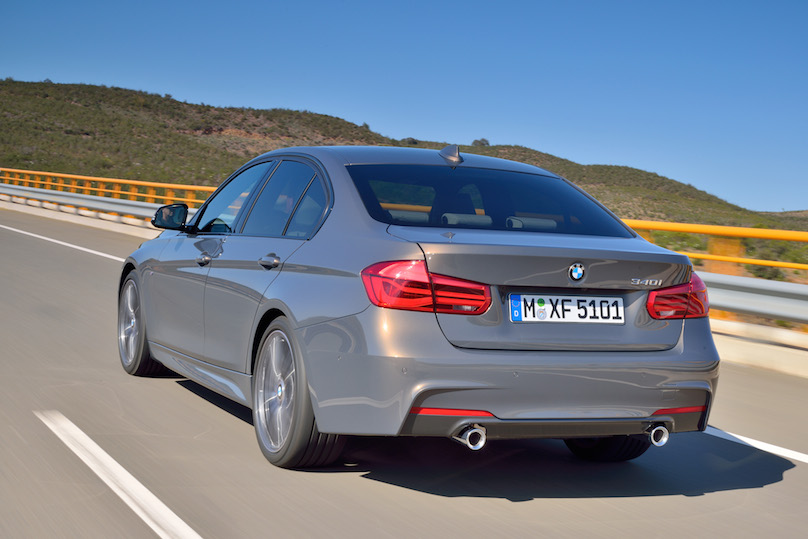 It’s a similar story on the inside, where mostly minor tweaks augment an already luxurious and handsome cabin.

There are new chrome accents around the air vents, near the window buttons and a few new centre stack trim bits, but the navigation system gets the biggest update. The new unit offers better performance and faster start up. It also has over-the-air map updating and a more realistic rendering of fine map details.

And that’s about it with regard to changes.

On the narrow and twisty canyon roads in and around Mirador, both the 340i and 340i xDrive were in their element. Simply stated, both were an absolute blast to drive — fast, responsive and precise, particularly in Sport+ mode, which sharpens acceleration and allows the engine to be revved right to the limiter.

The new 3.0-litre turbo six has a flat torque curve, with peak output (330 lb-ft) arriving at just 1,380 r.p.m., which makes for lots of fast getaways and passing slower traffic a breeze.

Peak horsepower slots in between 5,500 and 6,500 r.p.m., and while I wouldn’t say that’s low, it’s certainly accessible enough to launch the 340 in a hurry with either transmission.

Speaking of the transmissions, the standard gearbox is the 8-speed automatic with paddle shifters, while the no-charge option is the 6-speed manual.

I’m predisposed to favouring manuals, especially in cars like this one, but the automatic is a pretty good alternative, especially in manual mode. That said, if I had to pick one, I’m going with the manual. The clutch engagement is smooth, the shifting precise. It’s the best option for getting the most out of the engine.

On the handling front, both the rear and all-wheel drive 340s I drove were very well-sorted. The steering felt precise with good road feel. Body roll under load was minimal and both cars felt stable on a variety of roads.

If I had to pick a configuration, I’d go with the 340i with the 6-speed and optional M Performance package which adds Variable Sport Steering, Adaptive M Suspension, M Sport Brakes with high-performance pads and blue calipers. A set of sharp-looking 19-inch alloy wheels finished in Orbit Grey are also standard kit with this pack.

As for the styling updates, I’m fine with BMW choosing a fairly conservative course, but I think more could have been done to freshen the 3’s look.

Then again, the success of the 3 Series makes a pretty good argument for not messing too much with a winning formula.

ACCESSIBILITY: Very good — no trouble getting in or out

WHAT’S WORST: Not much really. Design update could have gone further.

MOST INTERESTING: New engine shares a common design with other BMW power plants

Handsome and athletic, albeit a tad conservative

Rich in amenities and fine detail — a sophisticated take on luxury

It offers an incredible amount of driving pleasure at any speed in a refined, attractive and well-equipped package.

Not much, really. The 340 is a fine sports sedan, but if I have to nitpick, I’d say the mid-cycle refresh is a bit too mild from a styling perspective.

Freelance writer Lee Bailie is a regular contributor to Toronto Star Wheels. Travel and other expenses for this story were paid by the manufacturer. For more Toronto Star automotive coverage, go to thestar.com/autos . Feedback: wheels@thestar.ca