Since we’re likely still a year or two away from the Voyager making its way over here, pricing remains a mystery.

I could very well be in the wrong on this, but I’m fairly certain that one of the vehicles most missed when Chrysler shut down its Plymouth division in 2001 was the Voyager minivan. Yeah sure – the Prowler is a cult classic like few others and the Breeze…well, let’s just say the Prowler is a cult classic like no others. Aside from that, the much-loved Voyager is fondly remembered. Heck, I took my driving test in one!

So much so that for 2020, Chrysler – sorry, “Fiat Chrysler Automobiles”, or “FCA” – is bringing it back in an interesting way.

Not interesting like how the revered Mitsubishi Eclipse has gone from sporty car to sporty crossover, but more in the way that it now gets a Chrysler badge (as it did for a time back in the early 2000s) and serves as your entry into the minivan game over at FCA, sitting below the more upmarket Pacifica.

Which is interesting because if you look at these photos, you can see that while it may be a downmarket model, it at least looks like a downmarket Pacifica, which is no bad thing. While minivans have seen a sharp decline in popularity over recent years, the Pacifica still managed to make a statement by looking a little classier, a little more lithe, and a little more wagon-like than did its counterparts from Honda, Kia, Toyota and so on. 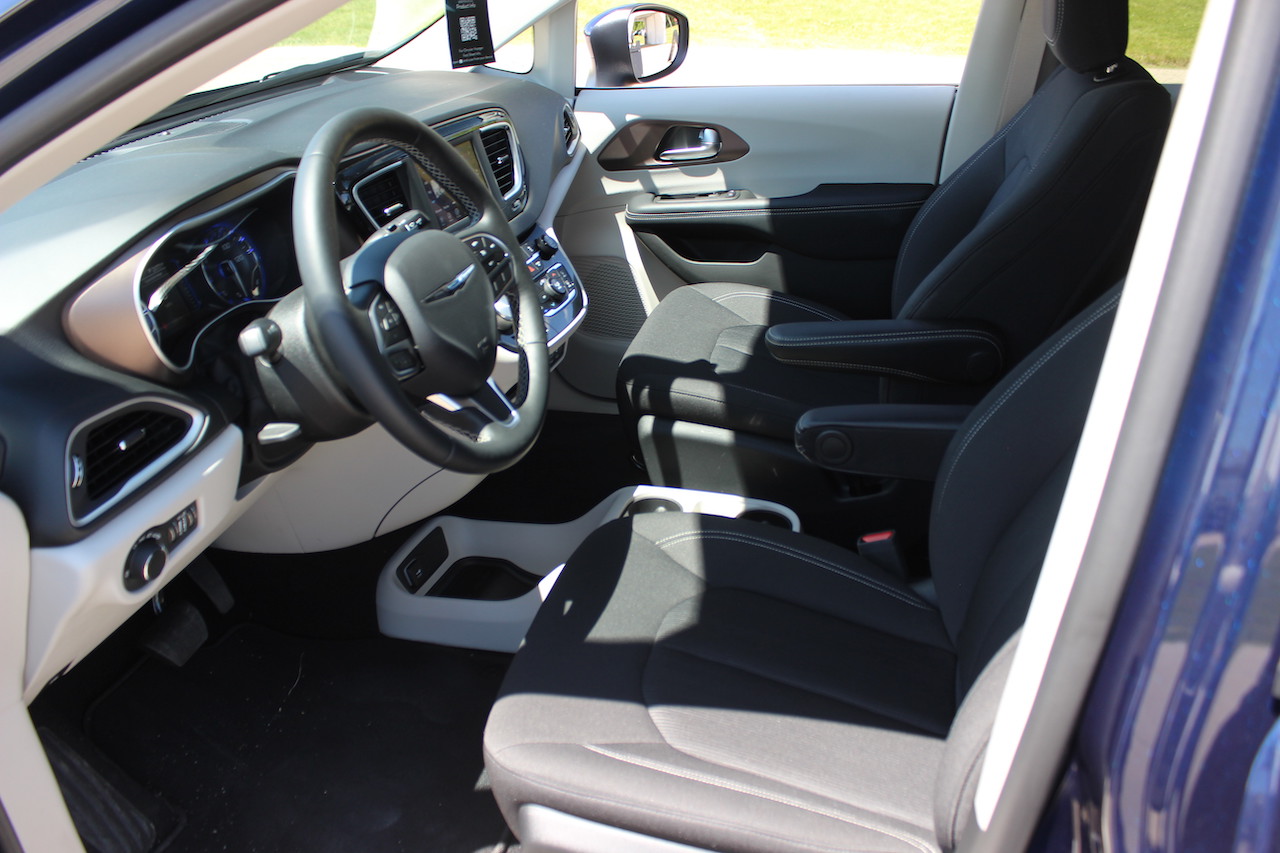 In Voyager form, you can see where a few nods to shall we say “affordability” have been made – the wheels are a little smaller, there’s a little less chrome jewellery and the window tint isn’t quite as heavy as you might find in a Pacifica.

You still get that great front fascia, though, as well as a downward-sloping roofline and a few chrome applications here and there.

Inside, meanwhile, you still get a bloody great big Uconnect infotainment screen and matching bluey gauges, dial-style gear selector and as you’d expect from a minivan, gobs of storage all over the place in the form of cupholders (eight of them!), bins, and drawers. The brand’s patented Stow n’ Go third row is also present, so you get cavernous storage space in the back. As of right now, however, that’s only available on the US-spec LXi trim, which is a fleet-only option. We’ll see what happens when it makes its way to Canada, likely for the 2021 model year. Sure; you won’t find fancy wood detailing or silvery trim pieces like you would in the Pacifica, but the Voyager is sure to be a family hauler so who cares, right? 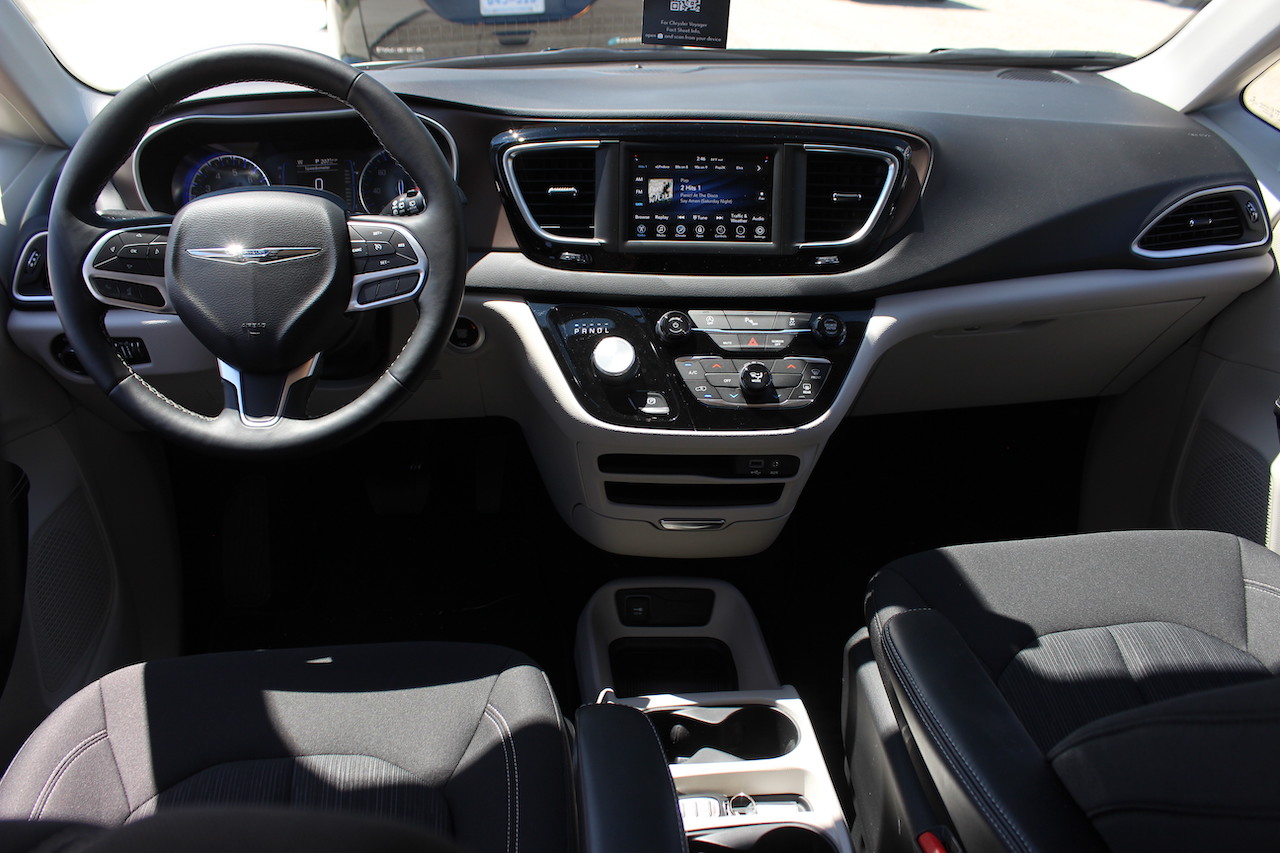 More important are the features inside, of which there are plenty especially in top-spec (in the US) LX trim; tri-zone climate control, second-row captain’s chairs for easier third row access, power driver’s seat and satellite radio. There’s also a cold weather package that adds heated front seats and steering wheel, though don’t be surprised if that comes as standard in Canada, as we often get the better of our neighbours to the south when it comes to standard cold-weather features, what with early-morning mid-winter hockey practices and all that.

Power from the 3.6L Pentastar V6, meanwhile, is rated at 287 hp and 262 lb-ft, sent to the front wheels through a nine-speed auto. Which, you likely won’t be surprised to find out, is exactly the same as what the Pacifica provides. There are no talks of a hybrid Voyager at the moment, which is likely due to the addition of a hybrid powertrain pushing it too far up the pricing ladder.

No matter; the 3.6L is found in everything from minivans to Jeep Wranglers and sedans because FCA has put a lot of stock in to what is a very good, strong and smooth engine. Driving the Voyager feels as driving a minivan should; you sit way high on comfortable chairs, and let the naturally aspirated V6 spirit you forward to said early-morning hockey in a confident, relaxing and above all comfortable manner. 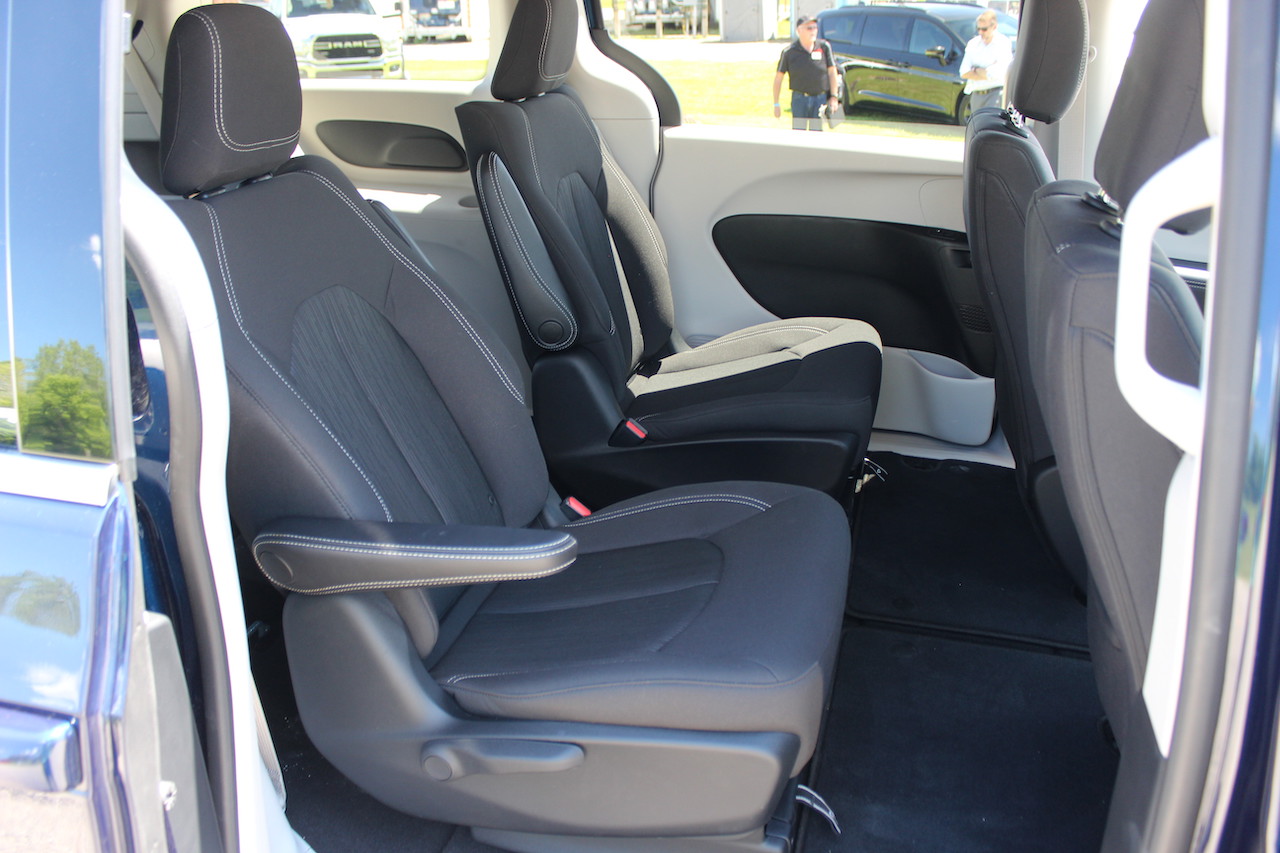 FCA’s nine-speed box has raised the ire of a few – colleagues and owners alike – but those tend to pertain to vehicles that pair it with less powerful four-cylinder motors. In my short time with the Voyager, I found it to be a fine companion to the V6, just as I have in the Pacifica before it, and the Jeep Cherokee before that. It contributes to that smooth, effortless progress to be sure.

Of course, the powertrain is one thing, but the chassis has to be able to walk the walk as well.

And walk – well, more ‘stride’ – it does; you will have a bit of body roll to be sure as the Voyager is tall and you can only defeat physics for so long, but the overall ride is a cushy one with nicely managed sound deadening so you aren’t annoyed by the slapping of tires over road imperfections every five seconds. It’s slippery, too, so wind noise is low and the kiddies in the back can sleep. 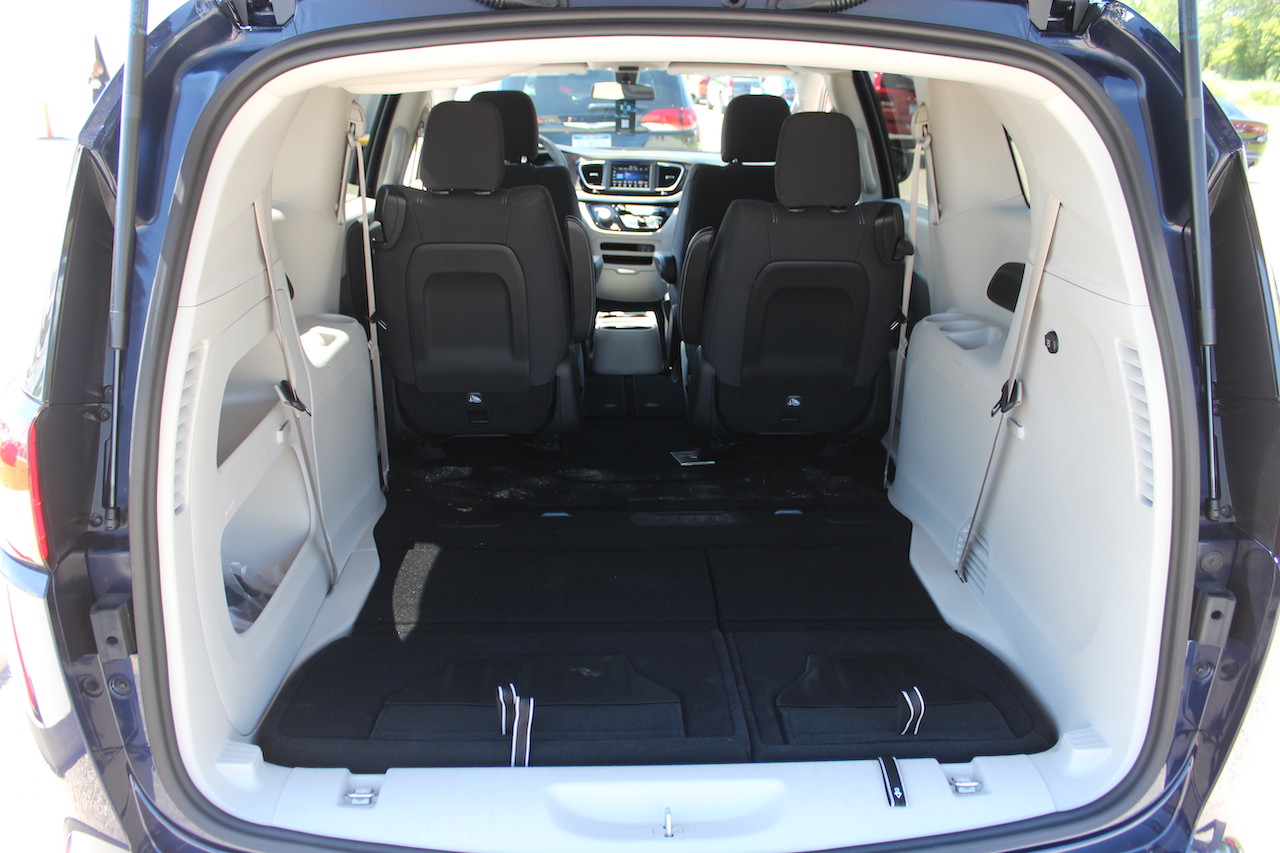 Since we’re likely still a year or two away from the Voyager making its way over here, pricing remains a mystery. A look at FCA’s current entry when it comes to entry-level minivans – the Dodge Grand Caravan – shows a base MSRP of $25,445. Is that an indication of what we can expect from the Voyager? Perhaps, but then you consider that the Voyager sits on a more recent platform and is just a better vehicle in general than the Grand Caravan – and that the base price in the US will be about 28 grand when it releases later this year — and you can see how it’s hard to predict a tit-for-tat situation right now.

Look for more information on the Chrysler Voyager early next year. 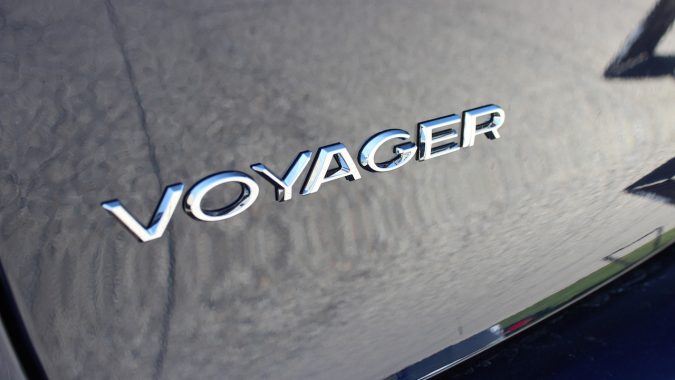 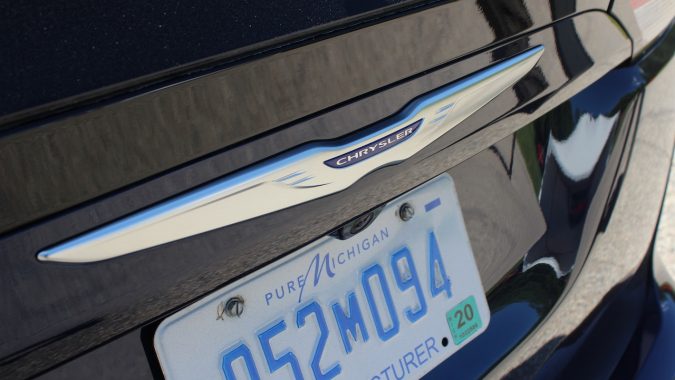