The Jetta is a very important car for Volkswagen in Canada, and with a new engine and new technology on tap, it should remain a strong performer in the hyper-competitive compact sedan segment.

KANATA, ONT. — Time for some Volkswagen trivia: When did the company begin putting the same 2.0-litre four-cylinder engine into the compact Jetta sedan?

I had no idea it had been around that long either.

At any rate, after 22 years of powering Jettas worldwide, Volkswagen has decided to retire the venerable 2.0 (or 2-point slow, as it was sometimes called) and replace it with an all-new 1.4-litre four.

This is a significant move for Volkswagen, especially in Canada where 2.0-litre equipped Jettas account for about 20 per cent of the company’s sales volume.

The 1.4-litre TSI, known internally as the EA211, features both direct injection and turbocharging. While considerably smaller than the 2.0 in terms of displacement, it comes up big with performance and projected fuel efficiency gains.

Volkswagen also expects the 1.4 TSI to deliver much improved fuel economy with an increase of 22 per cent overall, and combined city/highway efficiency of 7.3L/100 km.

The available transmissions carry over from the outgoing car—there’s the standard 5-speed manual and an optional 6-speed automatic.

Because the Jetta was just facelifted for the 2015 model year, there’s not much else new with the 2016 model, although there are some significant changes with regard to available infotainment systems. 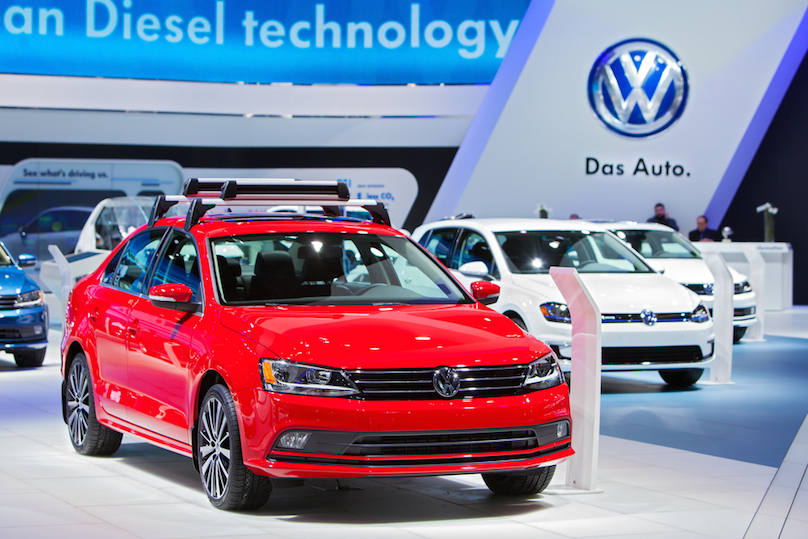 The Jetta 1.4 TSI will be available in three trims – Trendline, Trendline+ and Comfortline.

For the purposes of a recent preview in the Ottawa region, Volkswagen brought along a handful of mid-range Trendline+ models, each outfitted with an automatic transmission and the Connectivity Package with App Connect ($400) which comes with Apple CarPlay, Android Auto and MirrorLink.

The Trendline+ also comes with a bunch of other standard goodies, including an alarm system, heated front seats and wiper nozzles, power heated side mirrors, keyless entry and USB connectivity, among other features.

On the road, the Jetta offers a pretty pleasing driving experience.

Despite its small size, the 1.4-litre turbo offers impressive acceleration thanks in large part to a flat torque curve. The engine delivers peak output between 1,400 and 3,500 rpm.

You’ll have to wind the engine up a little more to access all 150 horsepower at 5,000 rpm, but it’s a threshold that can be easily attained in normal driving situations.

All of this makes the Jetta surprisingly quick off the line when pushed hard, and although I would take the manual if I were considering this car for myself, the smooth-shifting six-speed automatic with Tiptronic offers a reasonable compromise.

With the driving mode set to sport and the transmission in manual mode, the Jetta feels more sporty thanks to the ability to select gears manually. It doesn’t deliver the same experience a traditional stick shifter, but it still raises the car’s fun-to-drive factor nevertheless.

On mostly country roads near Ottawa, the Jetta delivered a comfortable ride that struck a good balance between comfort and performance.

Wind and tire noise wasn’t entirely absent, but it was suitably suppressed. The front strut, rear multilink suspension soaked up most of the road imperfections without causing too much of a ruckus inside the cabin.

While I’m not the biggest fan of the Jetta’s rather pedestrian, albeit handsome, exterior appearance, it is a very attractive car on the inside. Volkswagen has done an impressive job of delivering a spacious, comfortable cabin that isn’t littered with odd design cues and cheap trim materials.

While I wouldn’t describe it as exciting from a design perspective, I appreciate the straightforward layout of the controls and switches and the easy manner with which they operate.

From the seats to the dash to the centre console and other touch points, the pleasing tactile feel of the Jetta’s interior plastics and fabrics belie its relatively low cost of entry.

As mentioned, the Trendline + model I drove comes with a few extra features over the base model, but it still delivers plenty of value for money. Given our long and brutal winters, the heated seats alone make it a package well worth considering.

If you have a smartphone, you should consider adding the Connectivity Package. For an extra $400, it offers full smartphone integration.

Without getting unduly technical, these systems basically make the phone a part of the car. Once it’s connected via a USB cable, it renders the phone inert as all of its functionality has been transferred to the car’s infotainment touchscreen.

I didn’t have much time to explore its capabilities, but Android Auto worked seamlessly with my Samsung Galaxy S6. My Google Maps app served as the car’s navigation screen, while other apps such as Spotify and Tune-In Radio delivered music options. The experience will differ by platform and phone, but it should help reduce driver distraction by allowing users to plug their phones in and leave them alone.

RELATED: Volkswagen fans: Where are they now?

Many manufacturers are rapidly getting on board with these systems, and Volkswagen is at the forefront. All of the company’s Canadian-market 2016 cars – with the exception of the Touareg – will offer these systems either as standard equipment or as an option.

The Jetta is a very important car for Volkswagen in Canada, and with a new engine and new technology on tap, it should remain a strong performer in the hyper-competitive compact sedan segment.

Freelance writer Lee Bailie is a regular contributor to Toronto Star Wheels. Travel and other expenses for this story were paid by the manufacturer. For more Toronto Star automotive coverage, go to thestar.com/autos . To reach Wheels Editor Norris McDonald: nmcdonald@thestar.ca

WHAT’S NOT: While handsome overall, the exterior styling remains rather vanilla

The Chevrolet Cruze starts at $17,675 and features an efficient 1.4-litre engine. Android Auto and Apple CarPlay are available options.

The Honda Civic has been the best-selling car in Canada for 17 years. The latest sedan starts at $17,324.