Porsche has a winner with the Panamera Sport Turismo

Jim Kenzie calls this new model a ‘station wagon.’ Coming to Porsche stores near you this fall, it improves rear-seat headroom and adds cargo space.

DUNCAN, B.C.-There can be little doubt that a station wagon is the most intelligent and logical of body styles.

You take up the footprint; you might as well use up the air space.

Doesn’t an SUV do that? True.

Porsche, being of Teutonic (specifically, Austrian) origin, would, you would think, be nothing if not intelligent and logical. Never mind that the 911 has had its engine in the wrong place for 54 years — we all have our little peccadilloes. 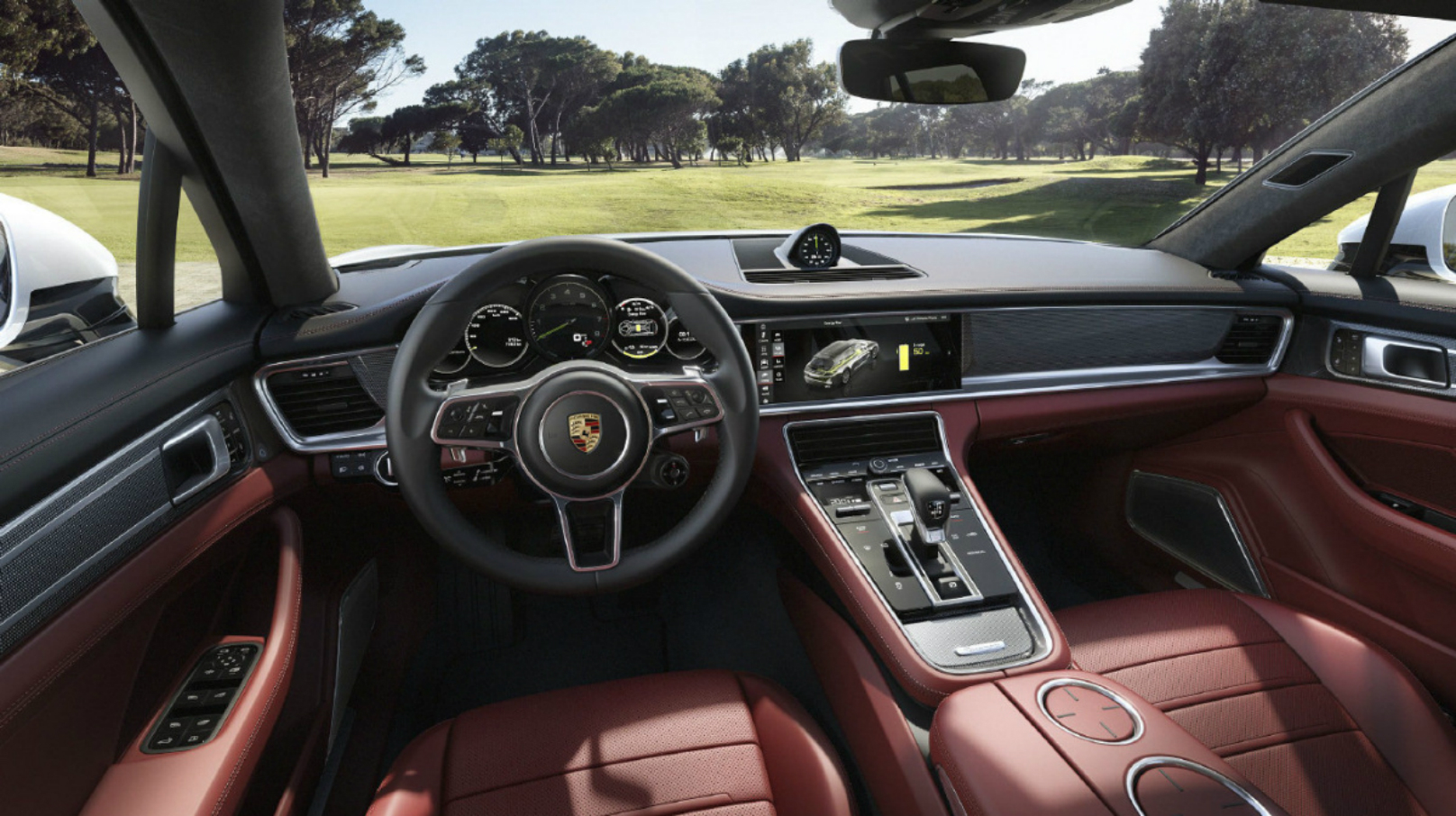 It goes on sale this fall at your friendly local Porsche store, starting at $109,700 for the base, full-time, four-wheel drive version (no rear-drive Sport Turismo will be offered) and ranging up to $176,000 for the Turbo Sport Turismo.

Fortunately, the Sport Turismo neither looks, walks, nor quacks like a duck. It instantly becomes the most desirable Panamera body style.

The idea germinated in 2010, shortly after the first Panamera sedan debuted. By 2012, a concept was shown at the Paris Auto Show and was warmly received. A bit odd, then, that it took five years to reach production, but Porsche has been pretty busy with other things in the interim.

To me, at least — an avowed wagon-o-phile — it looks better than the sedan. It takes the profile of the new-last-year second-gen Panamera and extends the roofline rearward, ending in a graceful tail, in place of the still-somewhat-pudgy-looking back end of its progenitor. All body panels ahead of the front doors are the same as in the sedan.

The new body style improves rear-seat headroom significantly and adds a chunk of cargo space, although you’d think the increase would be greater than the plus-50 litres Porsche claims.

But with the tailgate cut deep down to the bumper line, access to the hold is better than in most, um, ‘wagons’ (still feels odd to talk about a Porsche wagon).

The rear cabin is configured in standard trim into three segments on Sport Turismo. I hesitate to call them three ‘seats,’ because the middle position falls strictly within the ‘beats walking home in the rain, but only just’ category. I expect most buyers will choose the optional two-rear-seat setup that is standard fitment in the sedan.

A clever adaptive roof spoiler adopts different positions, depending on speed, although I expect — I trust — few Canadians will experience it extending automatically to increase downforce above 170 km/h. It also extends whenever the sunroof is open, to counteract the lift caused by the open roof, and the consequent turbulence.

In all, the changes add some 30 kilograms of weight to the car, hardly enough to dull its performance.

Coincidentally with the launch of the Sport Turismo body style comes the new Panamera Turbo S E-Hybrid sedan, the mightiest Panamera yet, which lists at an equally mighty $209,800 for the standard wheelbase model, $221,700 for the stretched “Executive” version.

This puts a total of 680 horsepower under your right foot, consisting of a 550-horse, twin-turbo V8 engine and a 136-horse electric motor. The numbers don’t quite add up because those peaks are delivered at different r.p.m. levels.

Given this is now the top of the Panamera range, it comes with just about everything in Porsche’s catalogue as standard equipment.

We had the chance to drive the Sport Turismo E-Hybrid, the Sport Turismo Turbo, and the Turbo E-Hybrid sedan on some surprisingly interesting roads on Vancouver Island. I say ‘surprisingly,’ because given how crowded the Island has become, you might think all the nice roads would be overcrowded, or over-policed. You just have to know where to look.

Better still, we had all-too-few laps in the Turbo E-Hybrid sedan at the Vancouver Island Motorsport circuit near this south-central-island town, which we have described to you before. I say ‘all-too-few’ laps because there are never enough laps.

First, the track time. This circuit is just 2.3-km long and very busy — you get little time to relax. Which makes the Panamera’s performance here even more impressive. It is a big car by anyone’s standards, yet it seems to shrink around you as you negotiate the tight turns.

Back in the real world of public roads, the new-last-year minor controls remain a complete mystery, Porsche having replaced proper knobs and buttons with ‘touch zones’ on an otherwise flat pane of plastic. There’s no possible way to manipulate anything by touch; you have to take your eyes off the road to do anything, and that’s never a good idea.

Once you figure out how you want everything set, off you go. The cars, in any configuration, again seem to be much smaller than they are. Steering is pinpoint accurate, and you can position the car anywhere you wish. Brakes are unconquerable. As with all current-generation Panameras I have driven, if you’re just tootling along in eighth gear and hammer on the loud pedal, it takes a nanosecond or two to respond. “Huh? You talkin’ to me?!?”

Once it does respond and the PDK gearbox downshifts to whichever ratio it thinks will best do your bidding, it’s ‘hold on’ or ‘HOLD ON!!’ depending on which engine you happen to be sitting behind.

It did seem like the hybrids took a shade longer to respond to a mashing of the throttle pedal, perhaps because it takes a bit of time to wake the electric motor up. That said, flat-out 0-100 km/h can come up in as little as 3.4 seconds in the V8 Hybrid. 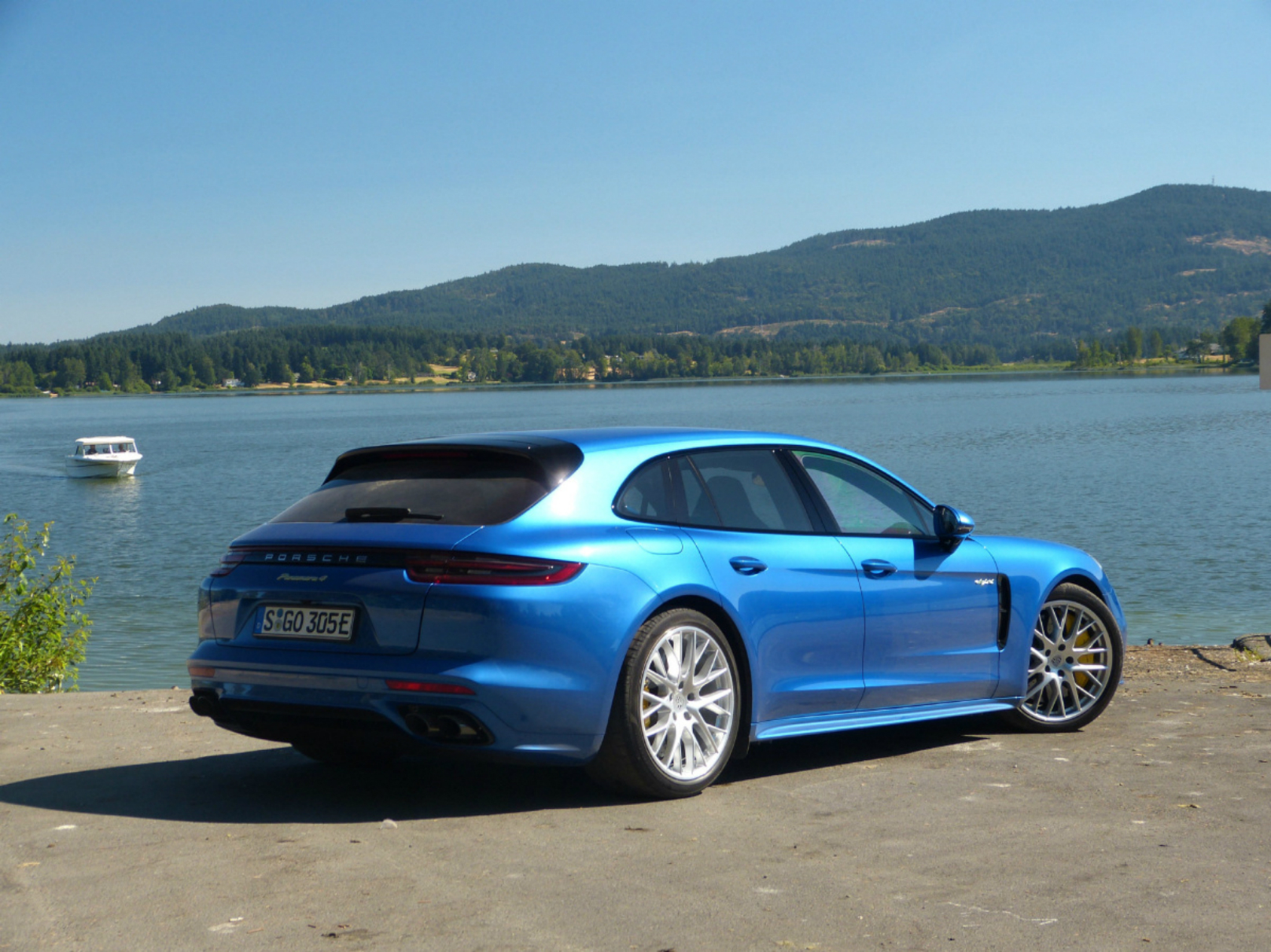 Porsche says you can get up to 50 km of range out of the electric motor alone. They’ve never lied to me before, not that I know of; still, that’s only if you take it really easy. Maybe you are commuting to the office on the 401, and you can’t go any faster than a crawl. But on the open road, you will use up those millivolts in a couple of milliseconds. I mean, what’s the point of having 680 horsepower if you are just going to pussyfoot along your favourite twisty two-lane blacktop?

If you can conspire to have a 240-volt charger installed at your home or place of business, you can recharge the system in a mere 2.4 hours. They don’t quote a time for those of us mere mortals who are limited to 110 volt systems.

Suffice it to say that Porsche has a dead-nuts winner with the new Sport Turismo. I have barely had space to scratch the surface of this car, but it should be a winner. A practical Porsche — what will they think of next? Choose your powertrain, and have at it.

As for the E-Hybrid, well, it’s there if you want it. Give me a proper engine every time.

COMPETITION: Sport Turismo — hmm-mm; maybe Mercedes-Benz E-Class wagon? Turbo eHybrid — really, not much like it in the marketplace. Maybe for green exotic car freaks, the Lexus LC 500h hybrid at almost half the price?