Price will keep it from being a big seller, but for those who want a touch of luxury in the minivan segment, it doesn’t get any nicer than this.

I’ve never owned a minivan and likely never will. I’m just not part of the demographic that has a need for what has been described by one of my colleagues as the ‘Swiss army knife’ of the automotive world.

But anyone who has followed my reviews over the years will know that I’m a big fan of this vehicle concept.

I can’t quite understand why minivan sales have dropped off a cliff in recent years, other than to say times and tastes are constantly changing. 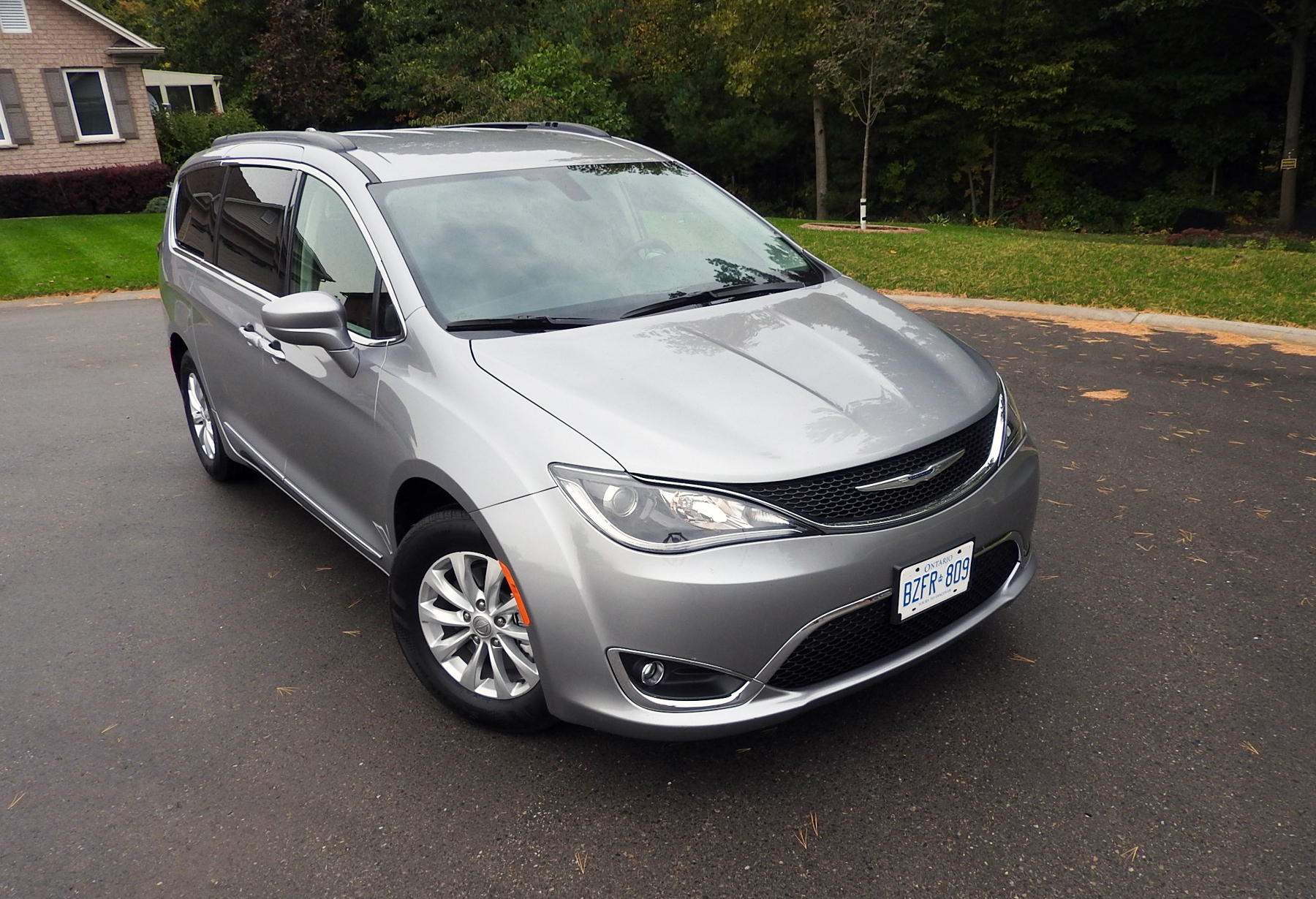 The 2017 Pacifica minivan features the traditional face of the Chrysler brand upfront. Active noise cancellation features help keep wind and road noise out of the cabin.

Just as the minivan took over from the station wagon a couple of decades ago, the crossover (a car-based vehicle with SUV-like attributes) is doing the same to it these days.

You may also like: The Evolution of the Family Car: From Station Wagons to Crossovers

However, I still believe the minivan will be with us for many years to come because they are just so darn practical to haul people and their cargo.

While some automakers have discontinued their offerings in this segment, Fiat Chrysler Automobiles (FCA) continues to bank on them with the introduction of its newest minivan, the 2017 Chrysler Pacifica. 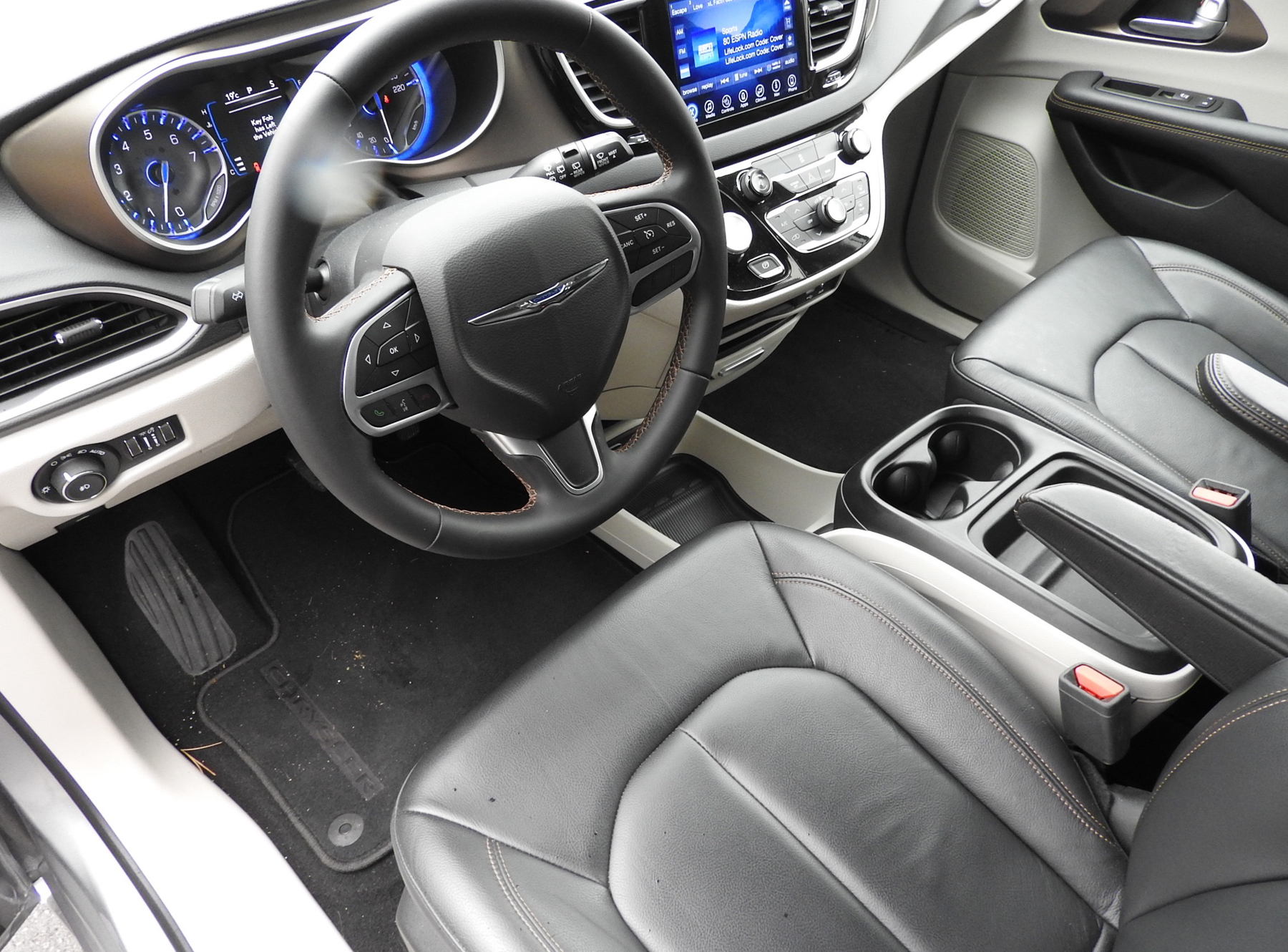 The interior of the Pacifica is decidedly upscale with high-grade materials evident throughout.

Most will remember it was Chrysler that introduced us to this box-on-wheels concept of a people-hauler with the Dodge Caravan and Plymouth Voyager back in 1984. Since then, they have led the pack in minivan sales and still control about 65 per cent of the Canadian market with Grand Caravan and Pacifica sales lumped together.

Interestingly, at the end of November, 2016 minivan sales in Canada were actually up more than two per cent for the year to 85,064 units.

So predictions of the demise of the minivan may be a bit premature.

But the Pacifica itself is never going to be a sales leader, not because what it offers, but because of what it costs.

This attractive digital instrument cluster provides important information at a glance. The dashboard and centre stack in nicely designed with the rotary shift knob located on the floating centre stack.

Both are recent additions to the model line up that at launch early in 2016 featured the $43,995 Touring-L as the base model.

FCA’s big seller in the segment will continue to be the Grand Caravan, which was to be discontinued, but has now has been given a temporary reprieve since sales continue to flourish.

Both the Pacifica and Grand Caravan are built in the Windsor, Ont. assembly plant so these vehicles are important to the Canadian economy. 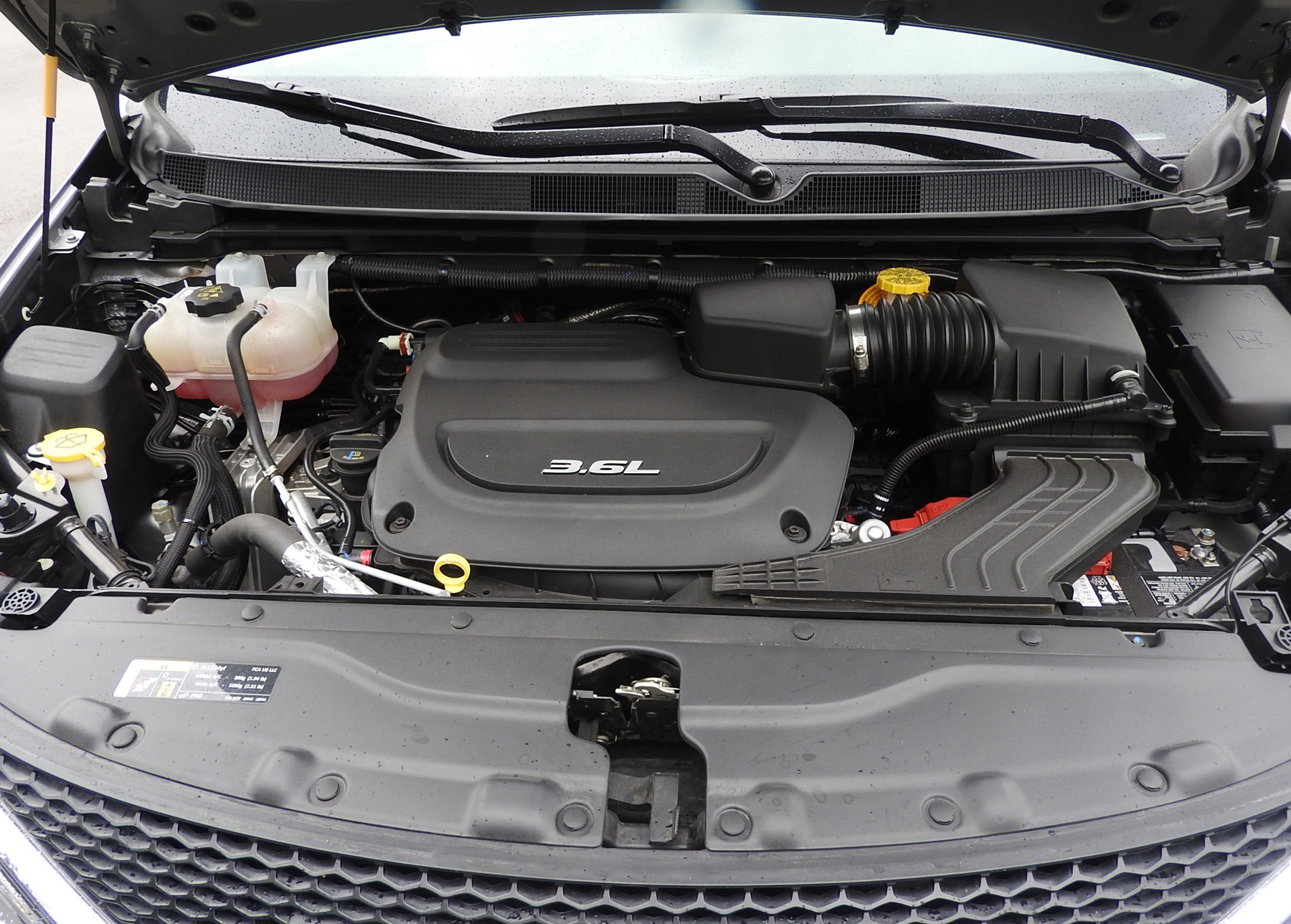 The Pacifica, available in gasoline and hybrid (gas-electric) format, is the replacement for the upscale Town and Country model.

Our tester was a mid-range Pacifica Touring-L trim with few options except for eight-passenger seating ($495), Uconnect with 8.4-inch touchscreen, Sirius XM radio and Navigation ($1,500) plus $195 for Billet Silver Metallic paint. All in, the price was $48,080 including a destination charge of $1,795.

Power for the Pacifica comes from a 3.6-litre Pentastar V6 engine that produces 287 hp and 262 lb/ft of torque. It is mated with a nine-speed automatic transmission that is controlled by a hockey-puck-like rotary shifter on the centre stack, much like Jaguar. 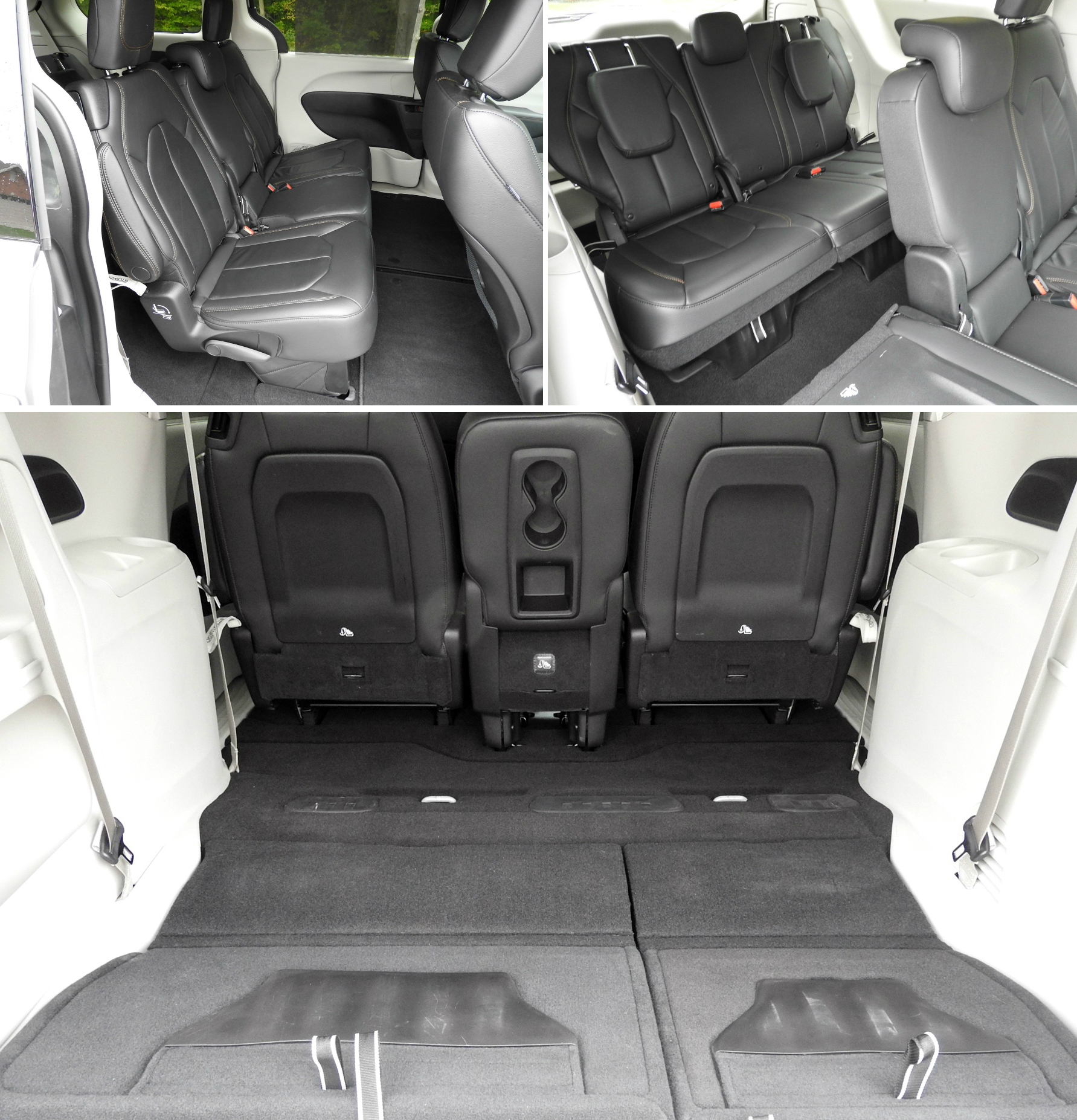 With the third-row 60/40 split fold-in-floor bench seat folded in this eight-passenger Pacifica, the 914 litres of cargo space behind the third row expands to 2,477 litres. With the second-row folded, cargo capacity is 3,979 litres.

Fuel economy is rated at 12.9/8.4/10.9 L/100 km city/highway combined. The highway figure is best in class, according to Chrysler and 12 per cent better than the previous model.

Chrysler boasts that the Pacifica has the largest interior volume in the segment — 914 litres behind the third row, 2,478 litres with the third-row seats down and 3,979 litres with the second row stowed in the floor. And, of course, like all Chrysler vans, the Pacifica will handle a 4×8 sheet of plywood or drywall.

One neat feature available is the new Stow ’n Go Assist— simply press a button on the B-pillar and the front seat moves forward to allow the second-row seat to be stowed into the floor tub. A second press of the button moves the front seats back into place. On our Touring-L model, this works driver’s side only; with the L-Plus both front seats move forward.

In addition, the Easy Tilt second-row seat allows for easy access into the third row.

Comfort and quiet are two words to describe the cabin environment of the Pacifica on the highway. When you punch the throttle hard, engine noise is pronounced but it subsides at speed. Acceleration with the V6 is brisk and despite the heft of the Pacifica, handling is more than adequate. 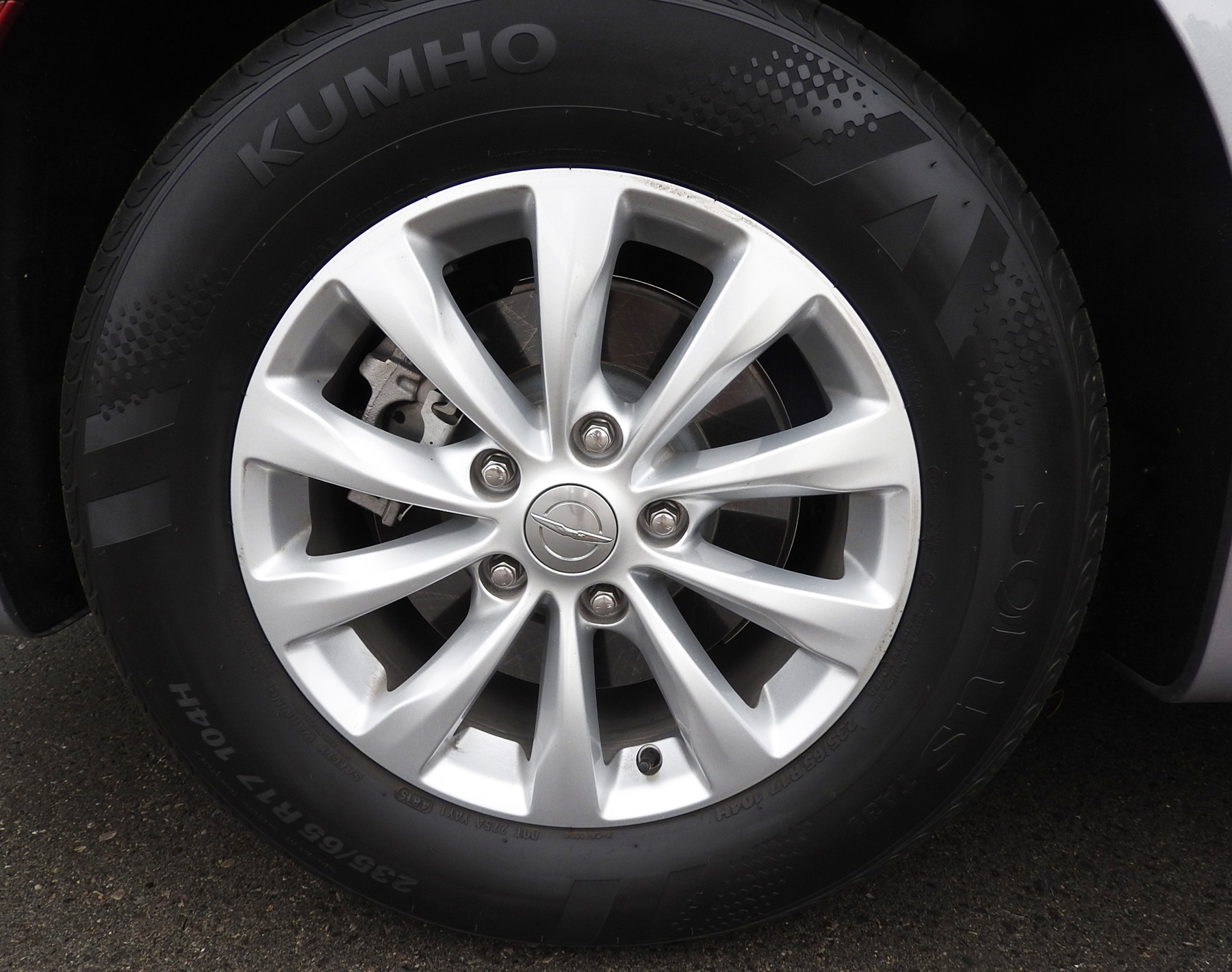 The Touring-L model comes with these 17-inch 10-spoke Tech Silver aluminum wheels. The Limited gets 18-inch wheels with 20-inchers optional.

Chrysler calls this the most technologically advanced minivan on the market with a variety of innovations including the new Uconnect rear seat entertainment system that allows rear seat passengers to watch movies, play video games or connect personal devices to surf the internet via two high-definition 10-inch touchscreen monitors.

The Pacifica is an easy vehicle to drive and an easy one to like.

Price will keep it from being a big seller, but for those who want a touch of luxury in the minivan segment, it doesn’t any nicer than this. 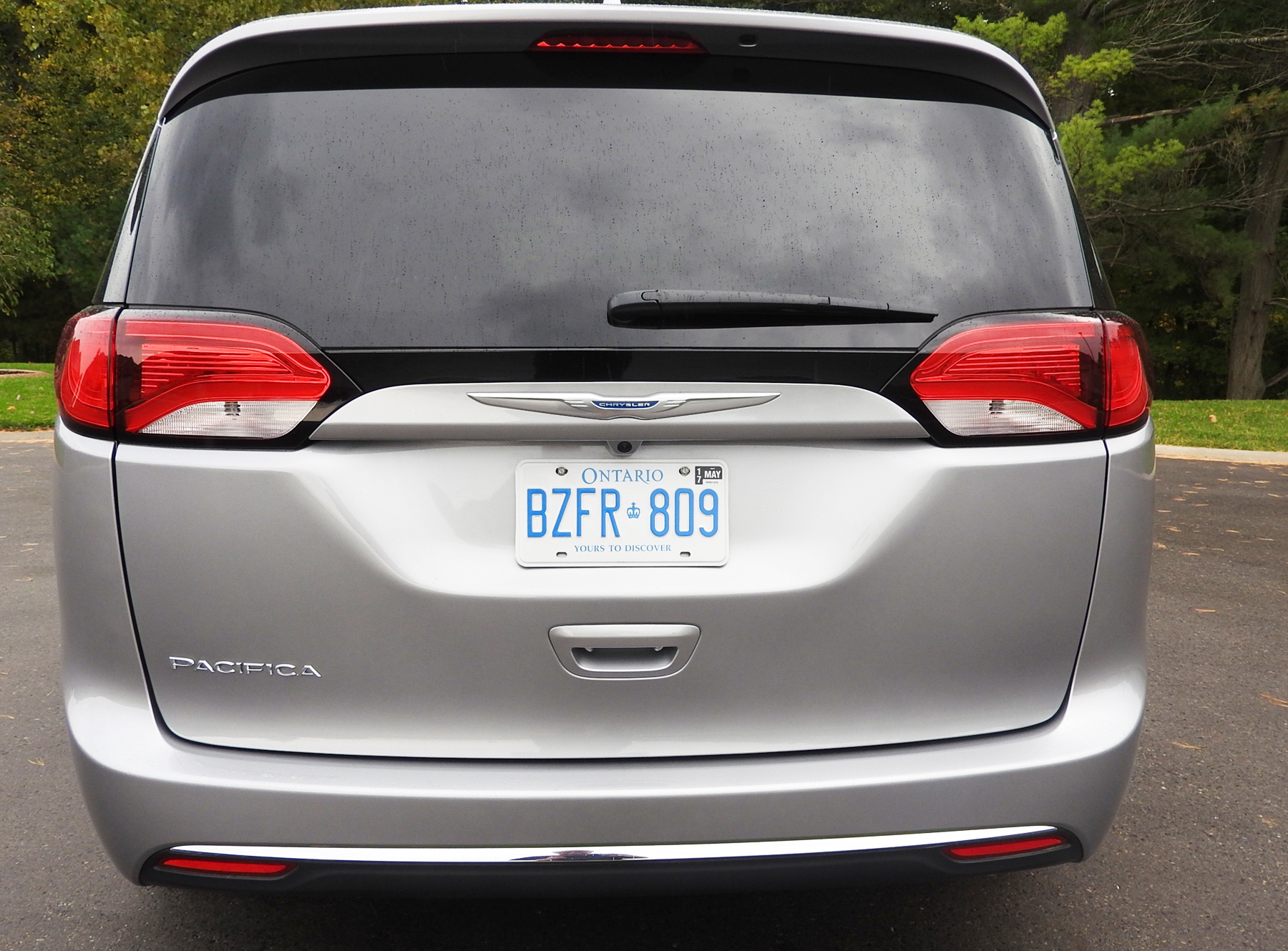 The rear of the Chrysler Pacifica is dominated by a large power liftgate with a low lift-over opening, making it easy to load heavy items into the vehicle.