It's ‘right-sized’ for the active family, has the power to lug your boat or travel trailer and is easy to drive in both urban and highway settings.

With many of today’s crossover SUVs, the utility part of the equation has blurred as they become more car-like and less utilitarian.

Not so with the Nissan Pathfinder that has undergone a major refresh for 2017, the first such makeover since the fourth-generation was launched in 2013.

This time around the Pathfinder has taken a slight step back in styling to its early roots with a more rugged, and as Nissan calls it a “stronger sense of adventure.” 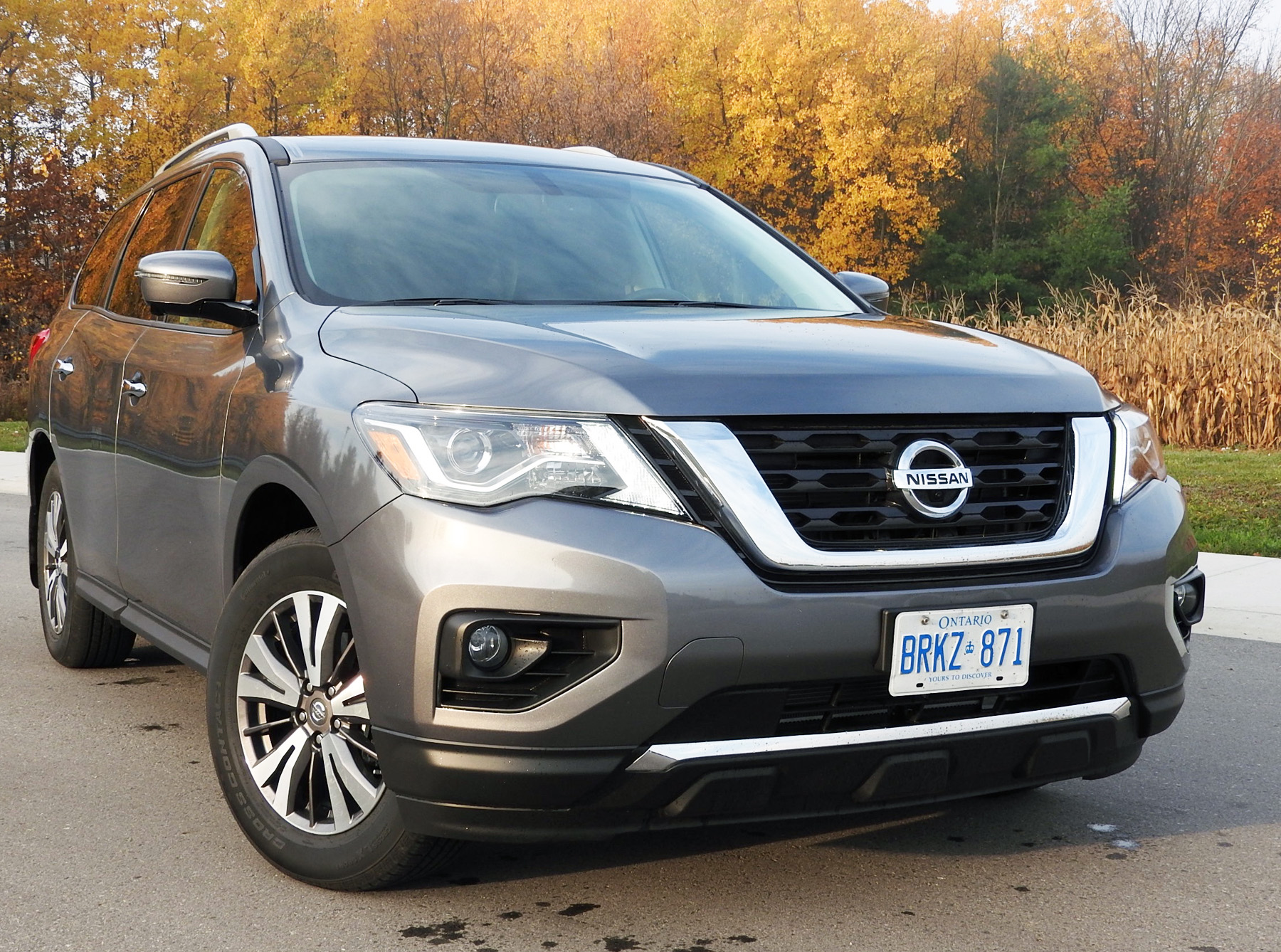 The Pathfinder has a slightly more aggressive look for 2017 with a reworked front end featuring a new fascia, V-motion grille, hood and fog lights along with LED headlights and daytime running lights.

It’s not a huge change, but the entire front end has been restyled to incorporate the “V Motion” grille design and boomerang-shaped headlights with LED daytime running lights. Even with the more rugged look, the tweaks in styling have helped drop the coefficient of drag to 0.326 from the previous 0.34.

A recent extended-weekend road trip for my wife and I through the Finger Lakes area of New York State with another couple on board re-affirmed my thoughts about the family-friendly nature of the Pathfinder.

I was never a huge fan until this new generation came around, thinking the previous model was just too big and boxy. 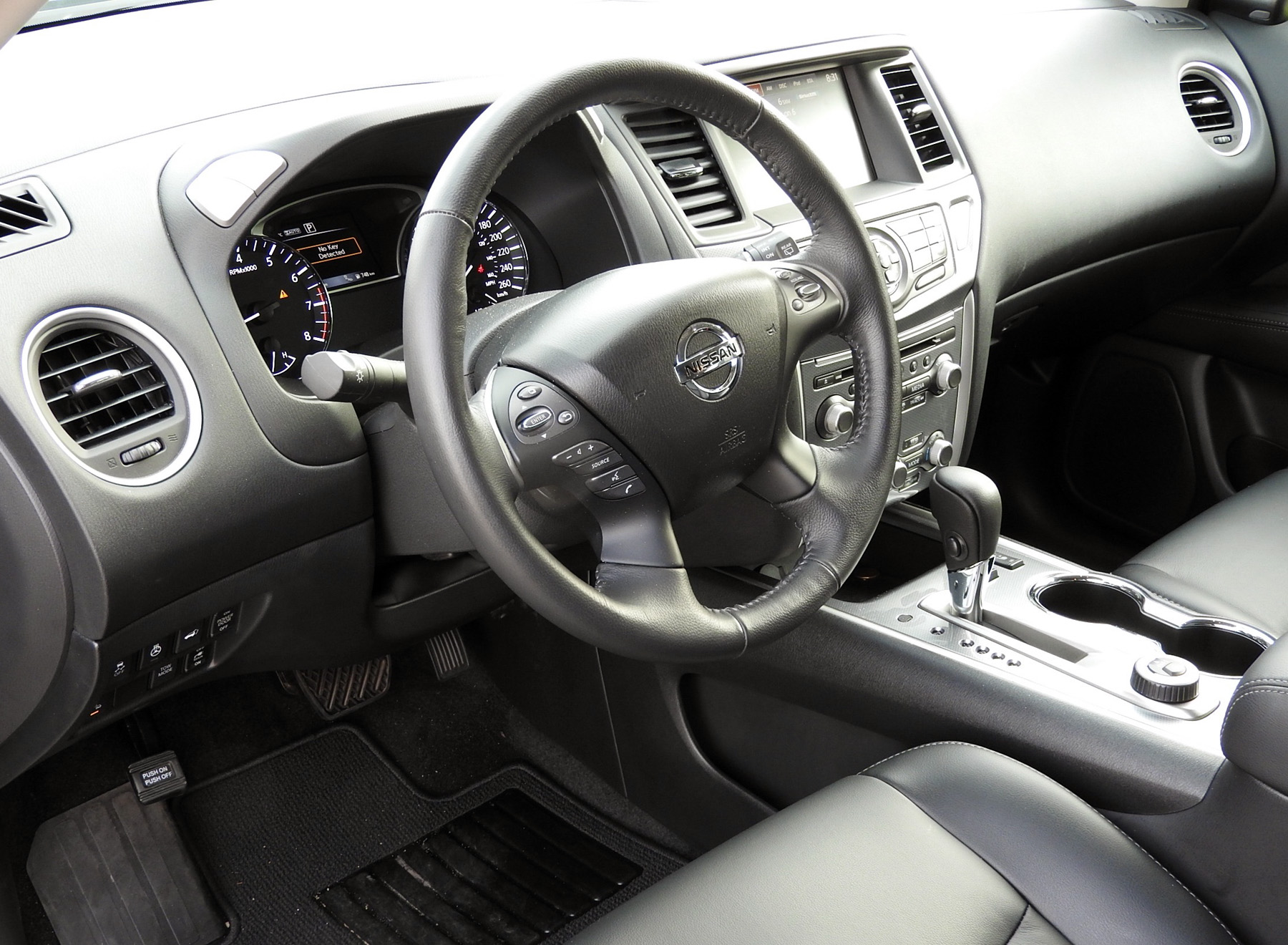 Enhancements for 2017 inside the Pathfinder include a focus on convenience and connectivity with new generation information technology.

But this one is right-sized, to my mind, and perfect for a family of four, slotted between the mid-size Murano and full-size Armada in the Nissan lineup. Just ask our nephew Darren, who is on his second Pathfinder. His is a sports-crazed bunch with two boys playing rep hockey, one a goalie, with dad also a goalie.

With all that equipment to lug around, space is precious and the Pathfinder offers plenty of it, 1,354 litres with the 50/50 split third-row seat folded flat and 453 litres with it upright— better than many compact sedans offer in trunk space today. With both second and third rows folded there is 2,260 litres for cargo.

During our trip south of the border, that space behind the second-row seat was welcome as the ladies in the crowd loaded every nook and cranny with purchases on our way home. 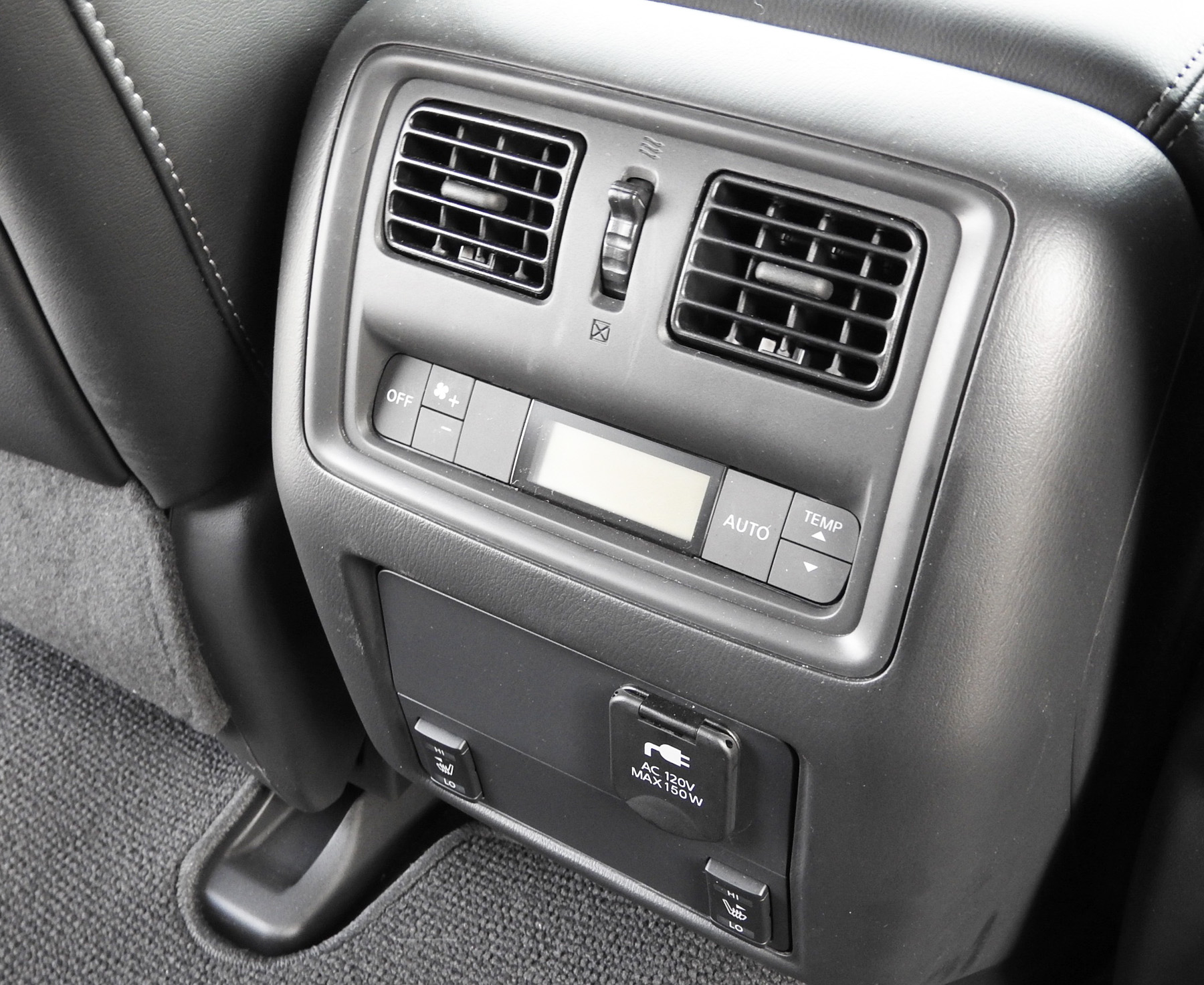 The second row leather seats in the SL-trim line are heated and feature their own control unit.

But there’s a lot more than just cargo room that makes this a desirable vehicle. It is comfortable, quiet and decently responsive on the acceleration front— in short, it offers everything you need in a family-hauler without going the minivan route.

Our tester was an SL 4WD, priced at $44,733 plus $1,765 freight and PDE. That included $3,335 in options like the Premium Tech Package ($3,200) that add a navigation system with eight-inch colour touch-screen monitor, Sirius XM and a Bose premium audio system with 13-speakers. 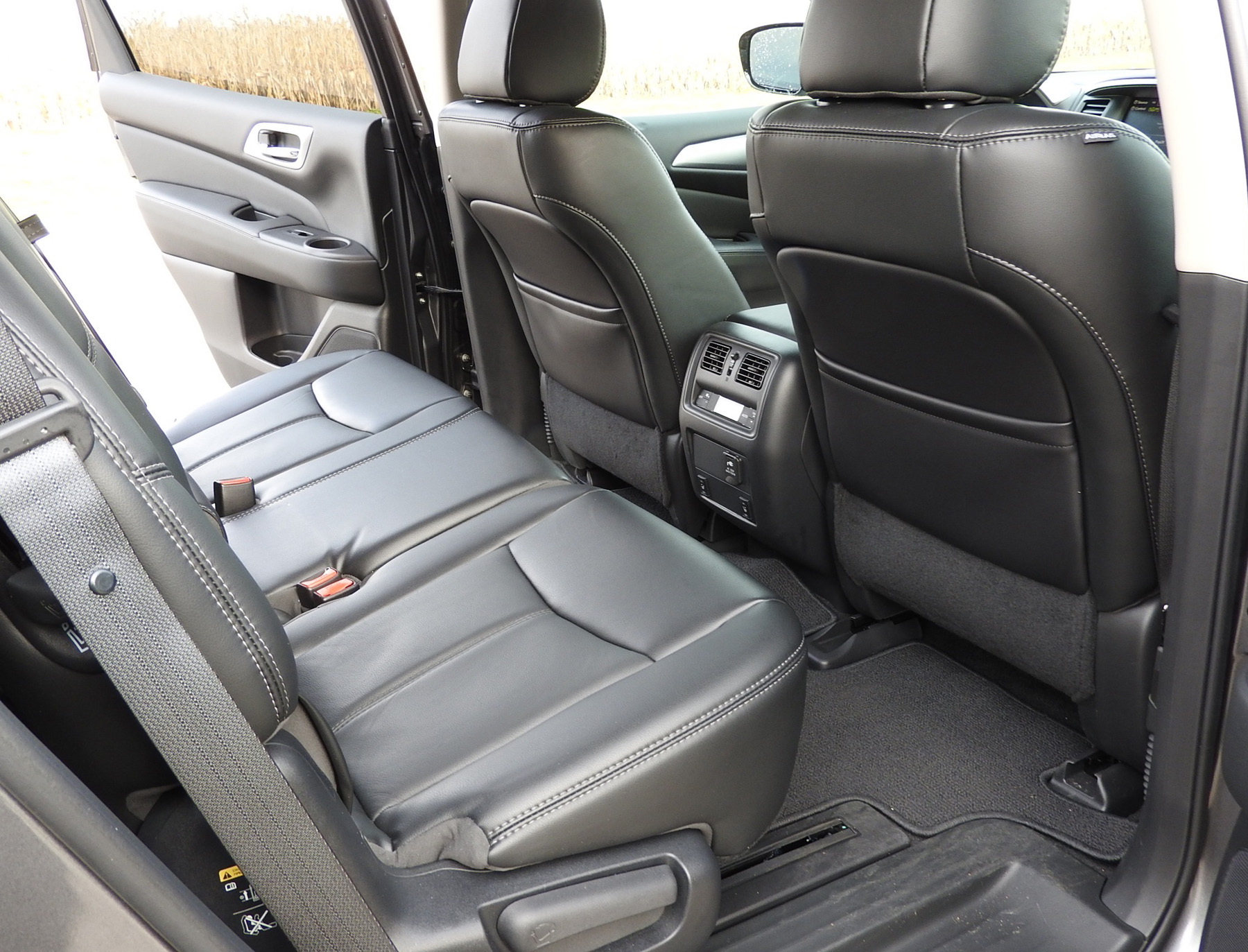 The 60/40 split second row seats three passengers and has manual slide, recline and fold flat features. With the EZ Flex Seating System the seat tilts and glides to allow easy access to the third row.

The Pathfinder offers what Nissan calls EZ Flex Seating for seven with a three-seat second row that splits 60/40 and the two-seat split-fold bench at the rear.

Although we didn’t use it, the Pathfinder has a second row tilt and glide seat that allows easy access to the third row, even with a child safety seat securely in place on the passenger side.

What was most impressive was the re-programmed Xtronic CVT transmission that feels more like a traditional automatic with every passing year thanks to D-Step Logic Control, which simulates shifts, giving a more natural acceleration feeling. 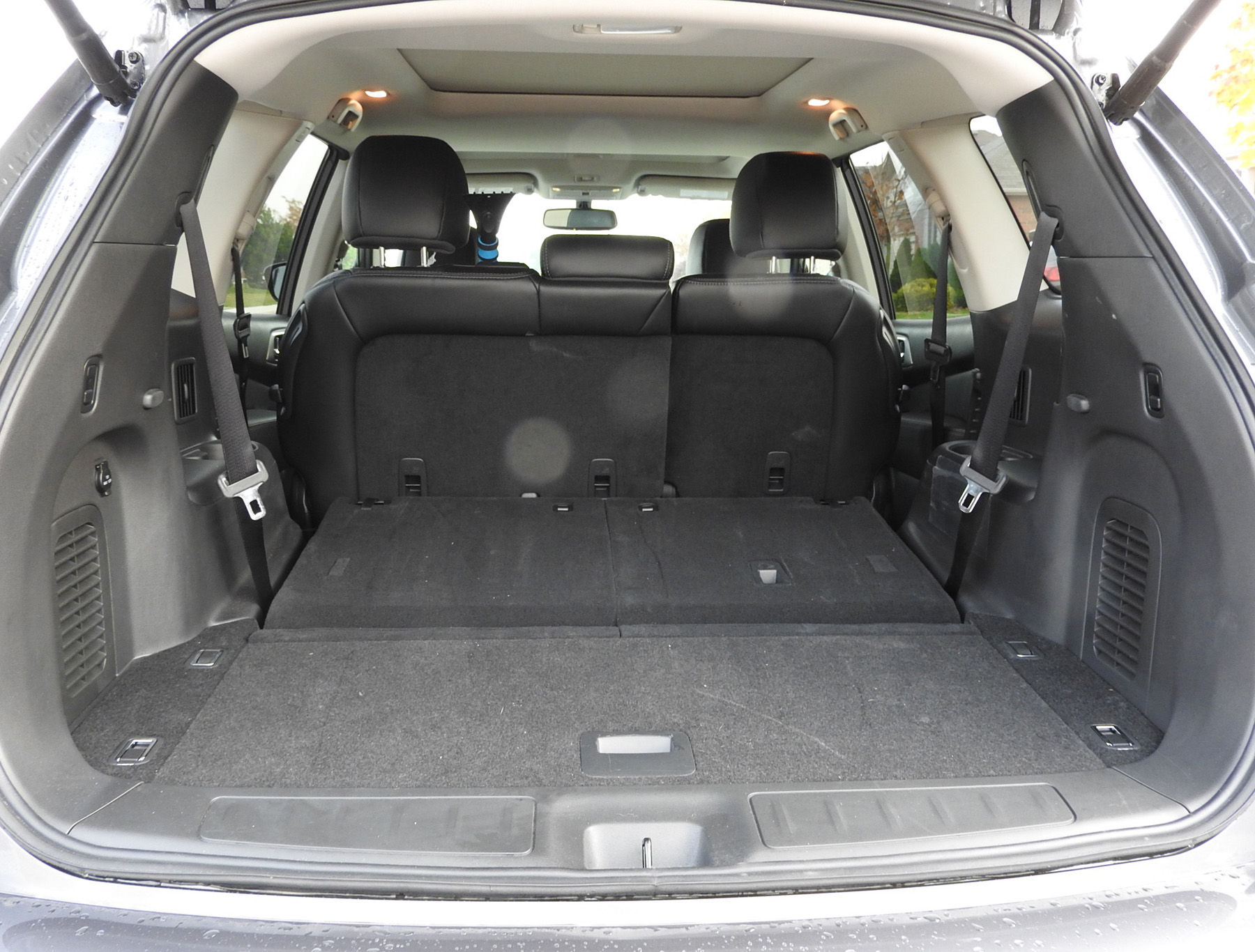 Nissan, which employs CVTs across its model lineup because of their efficiency and fuel economy, appears to be on the right track with their CVTs if the Pathfinder is any indication.

Ride and handling has been improved over the previous model as Nissan notes that the springs are 11 per cent stiffer at the front and seven per cent at the rear.

The steering ratio is also 11 per cent quicker for enhanced maneuverability. 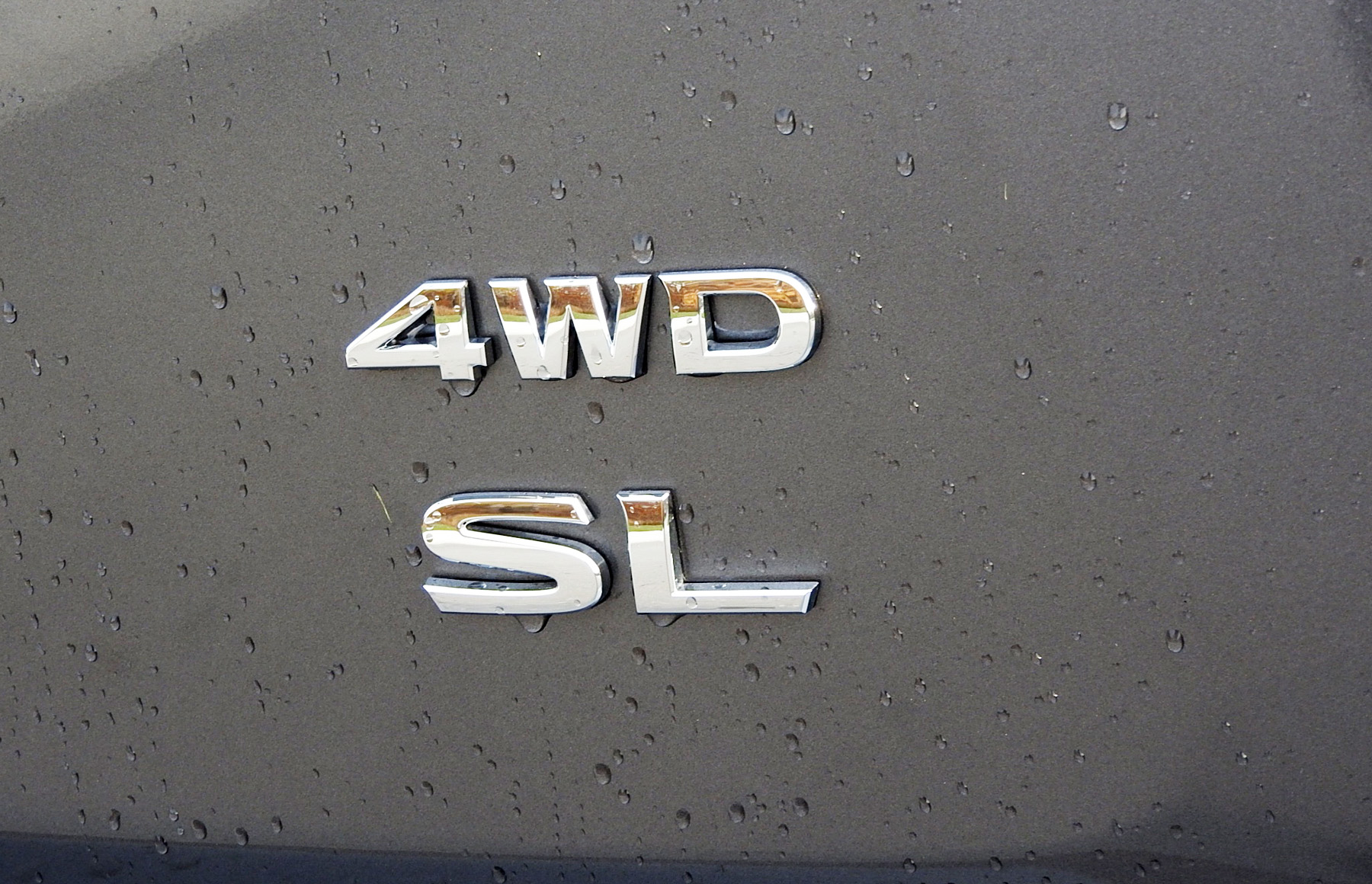 This is a 453 kg (1,000 lb) increase over the previous model due to the enhanced powertrain and body reinforcements added around the trailer hitch area. The advanced Xtronic transmission design also helps keep engine rpm optimized while towing without the typical “hunting for a gear” feel. 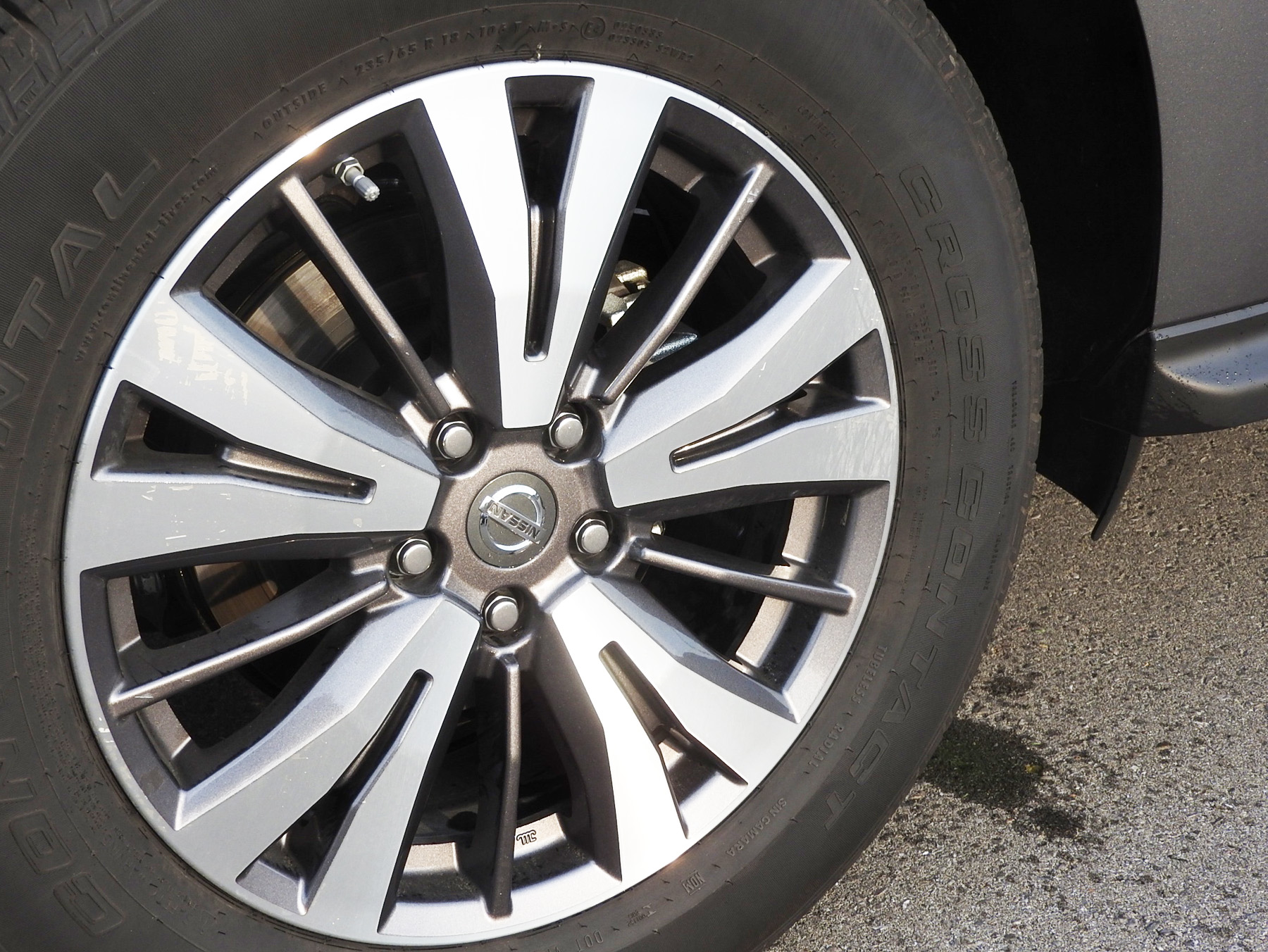 These 18-inch alloy wheels are found on the SL trim level. The Platinum model gets 20-inch wheels.

Our SL-trimmed tester was outfitted with 18-inch alloy wheels with leather seating all-round. The ladies particularly liked the heated second-row seats that are standard on the two upper trim levels. SL and Platinum also get the motion activated power liftgate.

So if you’re in the market for a car-based SUV, the Nissan Pathfinder may be just the vehicle for you. It is ‘right-sized’ for the active family, has the power to lug your boat or travel trailer and is easy to drive in both urban and highway settings. 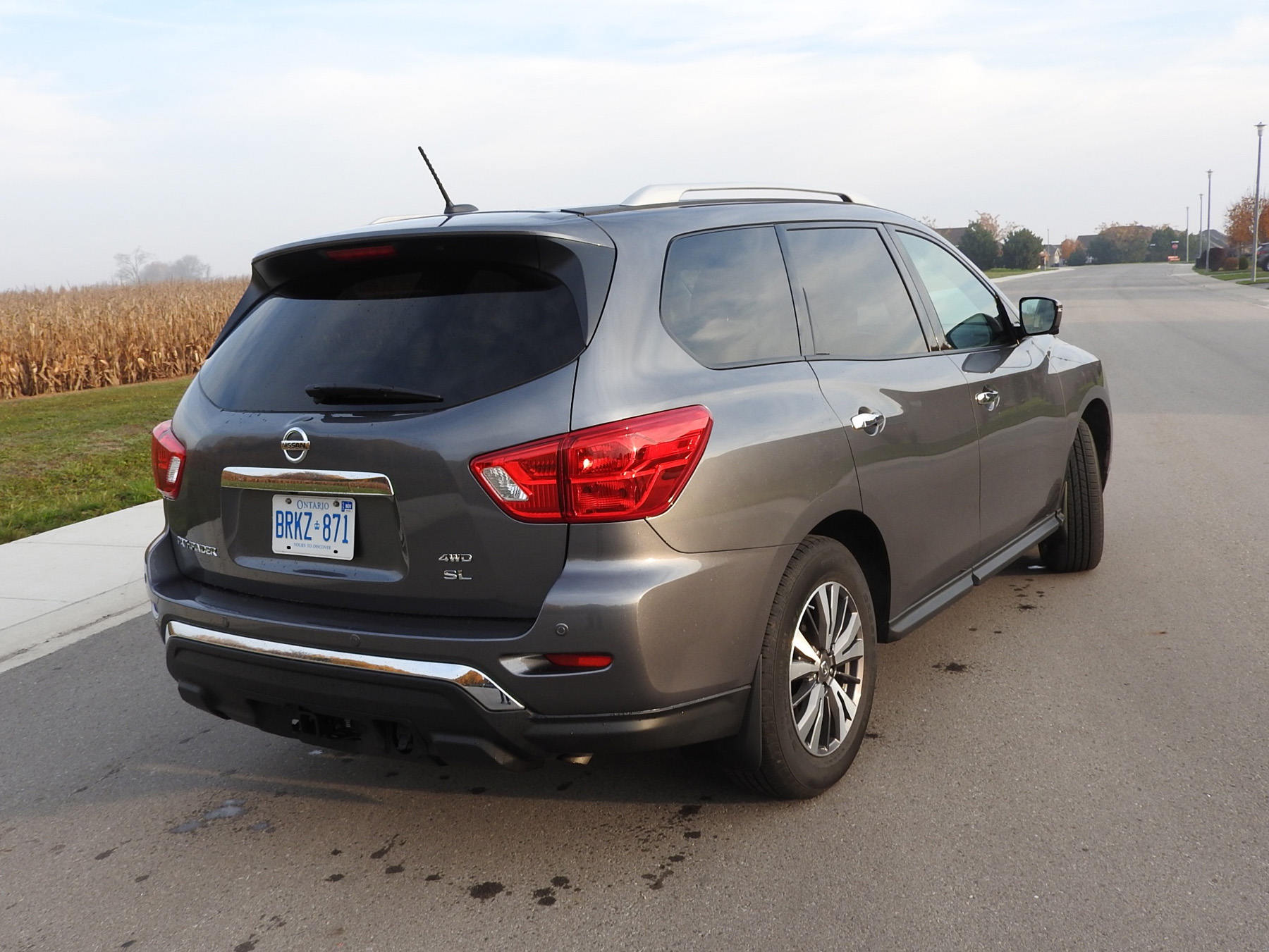 The rear fascia of the Nissan Pathfinder has also been redesigned for 2017.