VICTORIA B.C.—In an increasingly crowded traffic environment, you might think the most space-efficient, not to mention most logical, automobile configuration — obviously, the station wagon — would prevail.

The second-most space-efficient, not to mention second-most logical, automobile configuration — the hatchback — is hanging in, and, at least in some markets, is showing some growth.

Last year about this time, we told you about the new Kia Forte, a compact sedan that offers space, good performance, fine handling and an upscale look and feel.

This year, we have the new hatchback version of this car, called Forte5 as if it had five doors.

You’d think this model would be all that the sedan is and more, given the added practicality of the hatchback body style.

And you’d be bang on.

But the sedan range begins with a base LX trim level with a manual transmission, neither of which is offered in the hatch.

The closest comparator is the Forte sedan EX with automatic, which starts at $20,995. 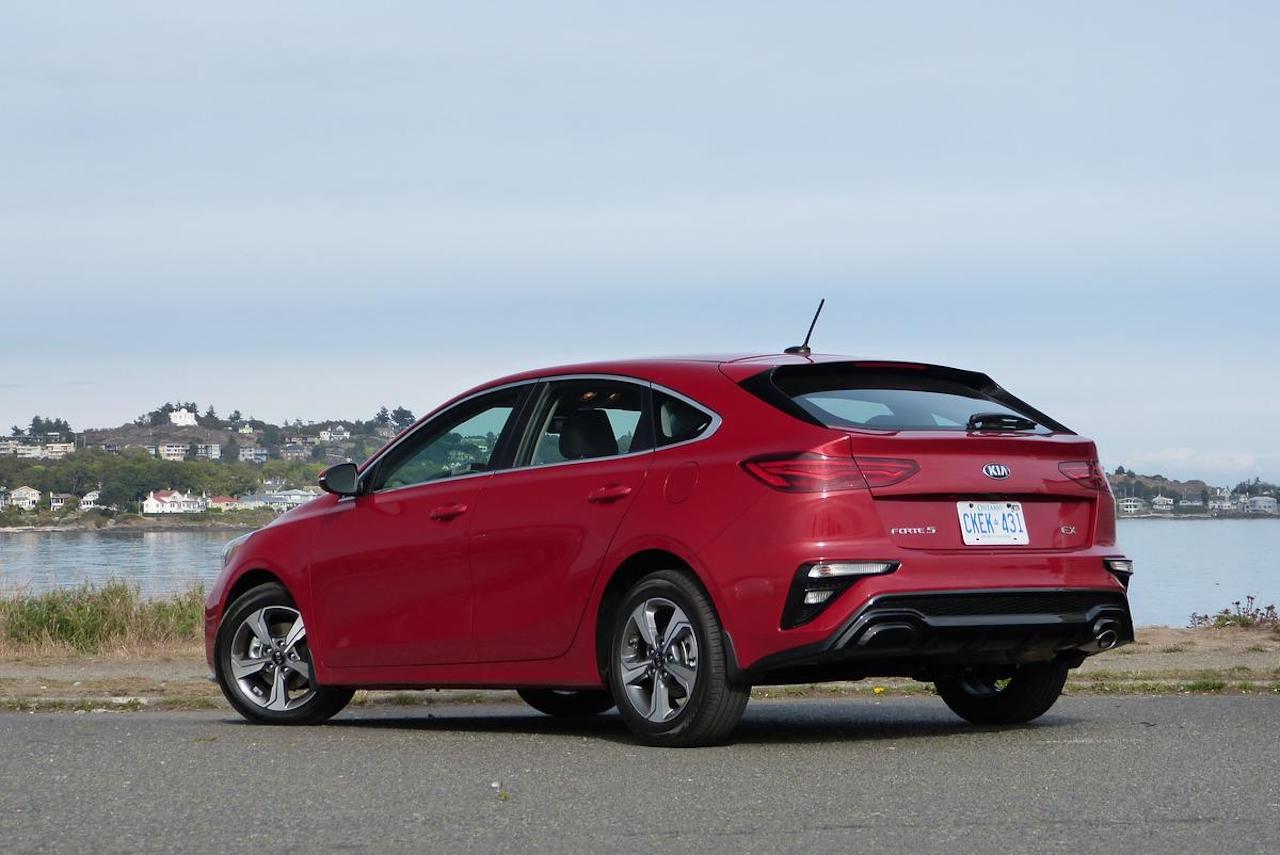 The Forte5 isn’t just the sedan with the back end chopped off. It’s effectively all-new aft of the front doors.

It’s actually 130 millimetres shorter than the sedan, all of that coming out of the rear overhang.

It is also a smidge — I think five mm constitutes a smidge — taller. The extended roofline yields better headroom for rear-seat riders.

There’s actually slightly less cargo space in the hatchback when the rear seats are up than in the sedan — 428 litres versus 502. But the taller hatch opening means loading stuff in there will be much easier.

And when you fold down the rear seats, you effectively triple that carrying capacity.

Yes, it still has the rear turn signals mounted far too low to be easily seen by other traffic, especially since that other traffic is increasingly likely to be far-too-tall SUVs.

And yes, the continuously variable transmission (Kia calls it “Intelligent” Variable Transmission) still occasionally has a mind of its own, shifting when it doesn’t seem to be the right time or place.

But Forte still rides, handles and performs with the best in its class, and retains the upscale look and feel of its sister ship.

Incidentally, our Forte sedans are built in Mexico, the hatchbacks in Korea.

Inside, there are sportier ventilated bucket seats up front, and a handsome leather-covered steering wheel with a flat bottom to improve thigh clearance when you are hooning around on your favourite stretch of twisty two-lane blacktop. 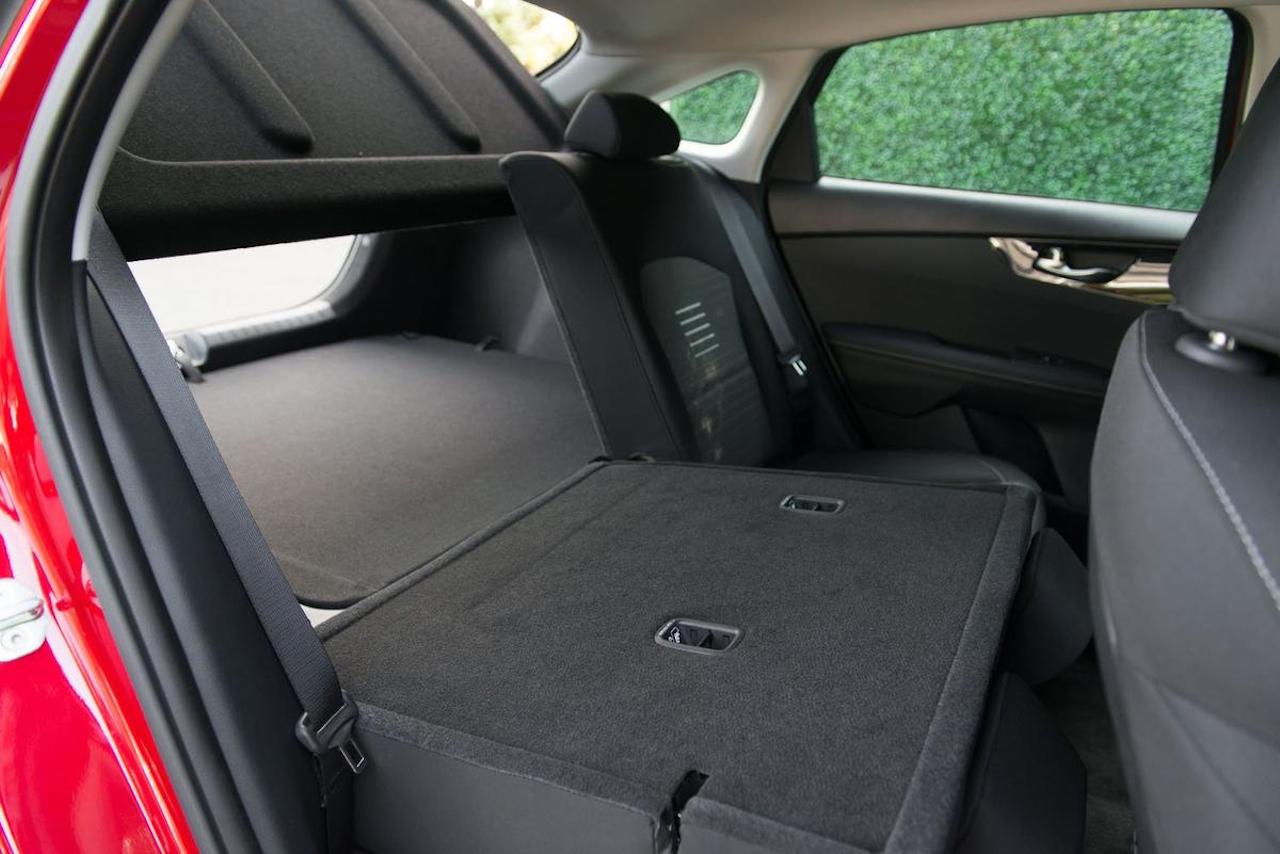 Because the big news is in the go-faster and handle-better departments.

That’s a very low peak torque rev point, thanks largely to what Kia refers to as a “mixed flow” turbocharger, which builds boost quickly with little of the dreaded turbo lag.

To it is bolted a seven-speed dual clutch manumatic transmission with paddle shifters for those who wish to stir the cogs themselves.

Too bad they still get the manual shift capability wrong; it should, nay must, be back for upshifts and forward for downshifts.

GT models get a multi-link rear suspension in place of the twist-beam setup on non-GT Fortes, and its brakes are upgraded with one-inch-larger front discs. Tires are upsized as well.

All this makes for a much sportier drive.

The Forte GT feels faster than the numbers indicate. Zero to 100 km takes a couple of ticks over seven seconds.

But few of us use a stopwatch at every stoplight Grand Prix. What we feel is how the car reacts to our inputs, and this one reacts like a champ.

Throttle inputs are eagerly answered. The dual-clutch gearbox shifts immediately and seamlessly, as they do.

Kias tend to be more firmly sprung than most in this segment, and the Forte GT more so than most.

I have yet to try it on Ontario’s pockmarked roads, but here on the Island, it rode smoothly.

I guess I have to mention that it comes with all the de rigueur nanny systems, but, as usual, my first act behind the wheel is to shut most of them off. I do leave rear-cross traffic alert and directional-stability control active, because you just never know.

The drive-mode-select function allows you to tailor the car’s various mechanical systems to your taste or mood of the moment.

I can’t see many people choosing a car like this, then driving around in ECO mode. The car actually records pretty decent fuel consumption under any but the most aggressive of driving styles.

“Normal” is, well, for normal driving, and offers a good middle ground.

The eager engine and that sporty suspension, however, will encourage you to try Sport mode, which yields firmer steering, crisper handling and more energetic throttle response. If you are attracted to a car like this, you will probably leave it in Sport.

In sum, the Forte5 and Forte/Forte5’s GT models further expand the compact Kia’s bandwidth in a couple of directions.

My pick? Easy; why not go for the best of both in the Forte5 GT?